A hands-off approach to strategy.

Not the Old Times

Real-time Strategy (RTS) is one of my favorite genres on PC. And yet, after the genre peaked in the late 90s, I have grown tired of the classic formula of base building and micro-management of units. Ever since then, I am on the lookout for fresh spins on the formula, and I am glad to report that Warpips is a worthy novelty game.

Gameplay Video of an Advanced Mission

Warpips is a single-player indirect-control RTS; in other words, the troops are not directly controlled with the mouse to select them, tell them where to go or who to attack; rather, the player buys troops and they go on their merry way (from left to right) independently, in the vein of games like Swords & Soldiers, Metal Slug Defense or Clash Royale. No need to order them to go to the slaughter, they seem to do so willingly! Still, there are a few ways for the player to influence the action, such as with missiles to target the enemy or “powers” to give a defensive or offensive boost at the most appropriate time. 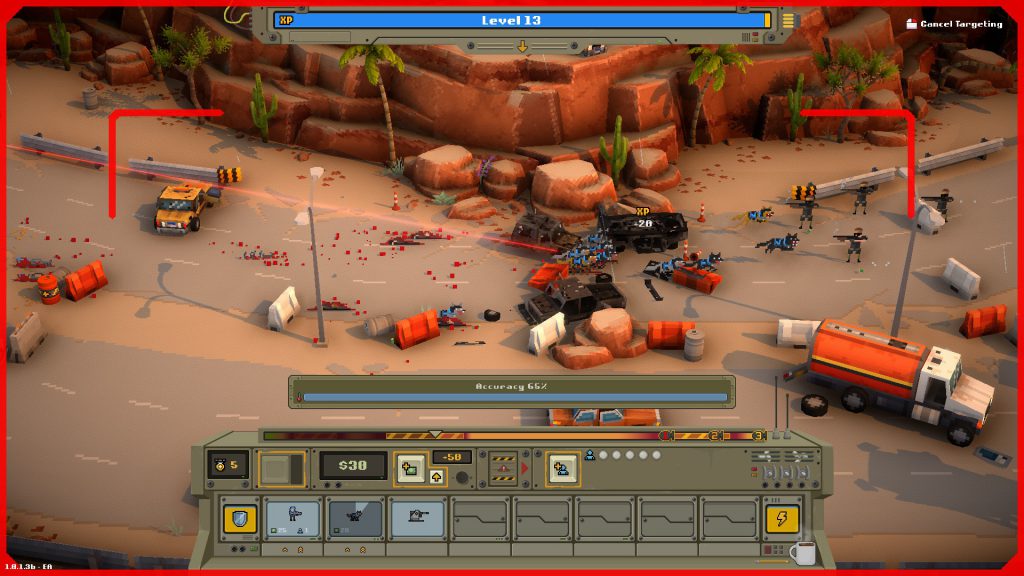 Despite the lack of base building or micromanagement, the game is not deprived of tactical considerations nor of an economy. As enemy units are destroyed, they are converted to experience points rewarding the player with Combat Points. Combat points can then be traded for Pip Supply to allow to recruit more troops (gradually increasing the army cap, for example from 7 to 8), or to a fixed amount of cash to buy said troops (for example $50), or to increase the fixed amount of cash that can be traded for 1 Combat Point at any given time (for example, from $50 to $75). Alternatively, Combat points can be used to upgrade troops all across the board, unlocking extremely useful perks that go from “recruit 2 for the price of 1” to a rocket launcher on one of the base vehicles. Therefore, depending on the current state of the battle, it might be better to quickly upgrade units to benefit from their perks, or to invest long term in the cash flow, or to quickly request cash to recruit new units, or if the economy is great the Combat Points can be kept to increase the army cap. While this type of economy is closer to some Tower Defense games or even a “Clicker game” than your standard RTS game (there is even a coffee mug on the interface panel), here it works pretty well, keeping you focused on balancing short-term and long-term decisions (albeit the battles are short, 5-10 minutes) depending on the flow of the conflict, always wondering what the risk & reward implications are. In retrospect, this is the sort of model that the game Riot should have adopted to be more pleasant to play. 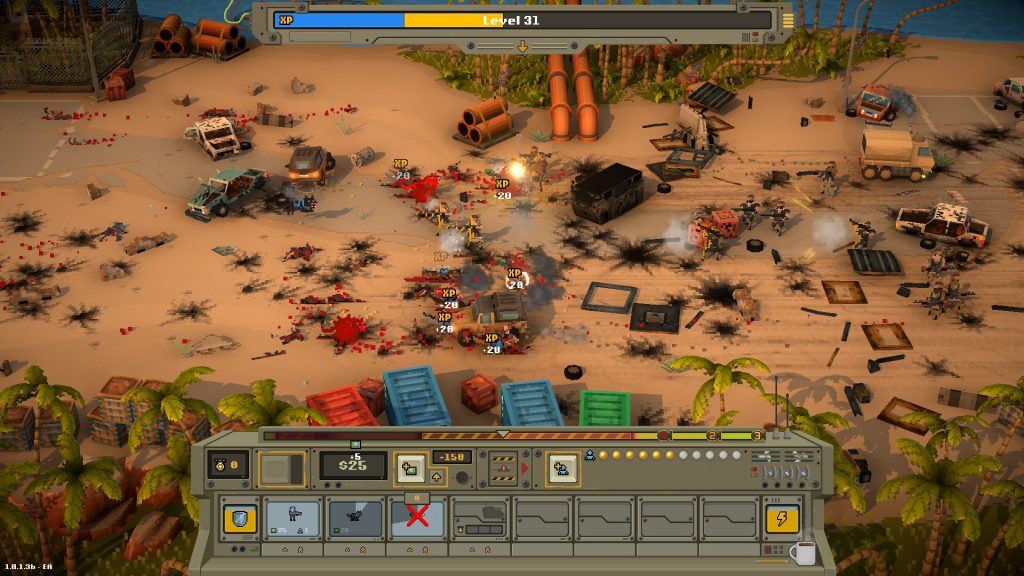 General, What Do We Do?

Due to the fact that all resources in the war effort have to be earned with Combat Points, the start of a battle is more about trying to be as efficient and conservative as possible to rank up experience for a lower cost, while gradually building up the economy and the army until you are able to stomp the enemy camp. There is also a timing to take into consideration, as the game displays a progress bar clearly showing when the enemy AI is sending tough waves or when there will be a moment of respite. Depending on the enemy defenses or the attacking troops, a lot of tactical considerations are required. Should you wait until the enemy soldiers have almost reached your base to suddenly purchase all your troops, or should you trickle down new troops to keep the enemy at bay and push for an advantage in this tug of war? Should you set up your troops in defense mode before the enemy turrets can target them, or should you rush the turrets with the offensive power boost? While this is far from being as complicated as micro-managing units in several locations in StarCraft, it is accessible but still deep enough to sustain the interest. And actually, pretty fun and immersive. 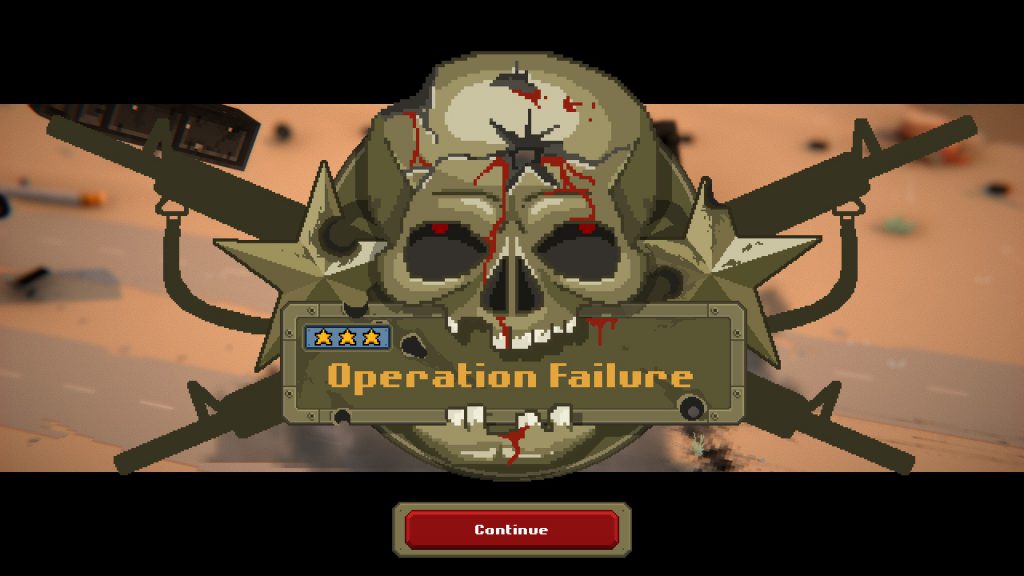 Under a music clearly inspired by Command & Conquer’s harsher riffs, the little pixelated soldiers are hiding behind covers and throwing grenades at the enemy troops, exploding the sandbags and bodies in puffs of smoke and blood particles. A tactical soldier witnesses the death of his squad and retreats a few steps to rendezvous with the reinforcements. Dogs are unleashed on the battlefield, mauling all hostile infantry. An airstrike finishes off the defenses, but suddenly an enemy tank shows up, advancing menacingly. Truth be told, there is more time to admire the action than in an RTS game in which you want the eagle’s eye, watching over dots scattered across the map. Still, despite Warpips‘s cute pixelated graphics, the larger battles took a toll on my framerate (on an ageing machine). 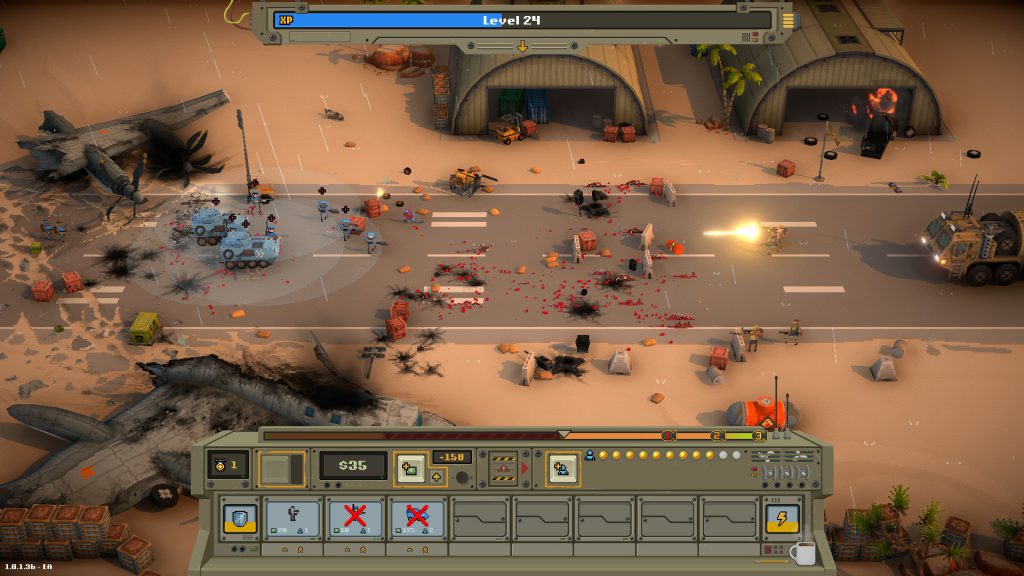 A Game of Balance

The department in which Warpips still needs a lot of work is in its balance and meta game. Before entering into battle, there is a campaign with islands to conquer by carving a path through their territories and reaching the final fortress. Each victory yields new units to deploy, but all units deployed are lost, whether victorious or defeated. This is where things start to get ugly, either as a game design perspective, or simply because it will put off many players who would have otherwise been interested in the more casual approach to the RTS genre. While this system ensures variety in the battles as players are forced to compose with what they have and what they are willing to sacrifice, it also creates a weird sentiment of not wanting to play some of the coolest units to keep them for later. While the game shows which type of units are lined up on the enemy side, it is harder to gauge the number of fixed defenses and the violence of the waves. Which means that there are frequent risks of overestimating the troops required, and wasting them in an easy battle, or of underestimating what was required, and losing a bunch of troops for nothing. A weak player will get even weaker, grow frustrated and quit, whereas an experienced player can roll over the game. Just to give you a heads up, the enemy AI can line up several Tanyas against you. If you know Red Alert, you understand what this means… 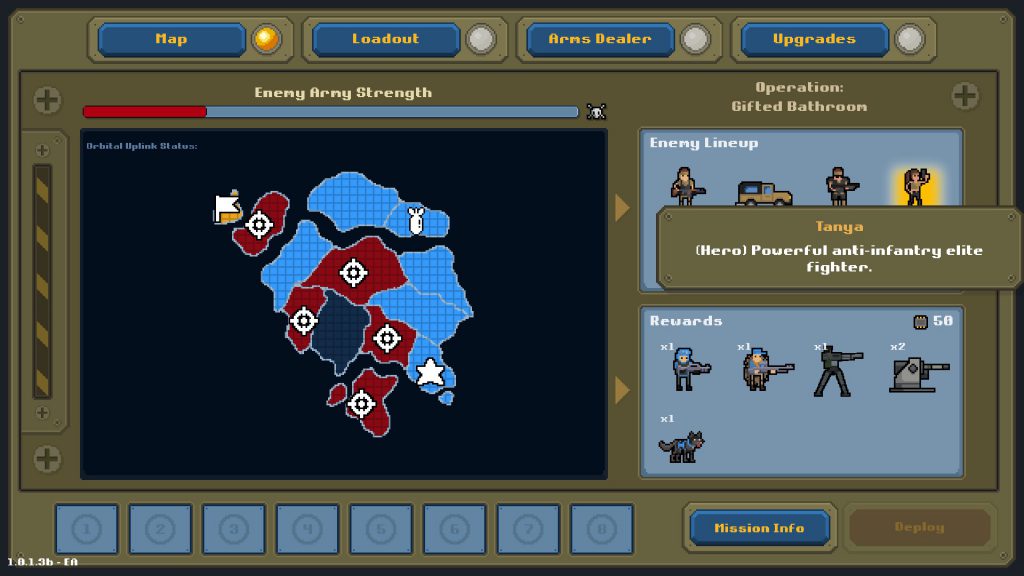 And since we are at Red Alert comparisons, I will use it to explain what bothers me with the unit scarcity. When I play Red Alert as the soviets, I will go for mass Mammoth tanks. Sure, it’s a shame that I don’t profit from the rest of the variety on offer… but I enjoy playing those tanks and crushing the skulls of my enemies while listening to the Hell March. In Warpips, I wouldn’t dare have fun with the tank, and I would only keep it for the final missions. Too precious, I would be afraid to break it. It’s a shame not to be able to use the toys we like to play with. Still… I enjoyed Warpips’ current campaign, and truly felt the need for combined arms as the difficulty ramped up. I had fun permanently upgrading my army and making decisions to conserve my troops, or taking risks by bringing in my last unit of something in hopes of recruiting a new one. Living on the edge! If you prefer to fool around, there is a skirmish mode, still a work-in-progress. 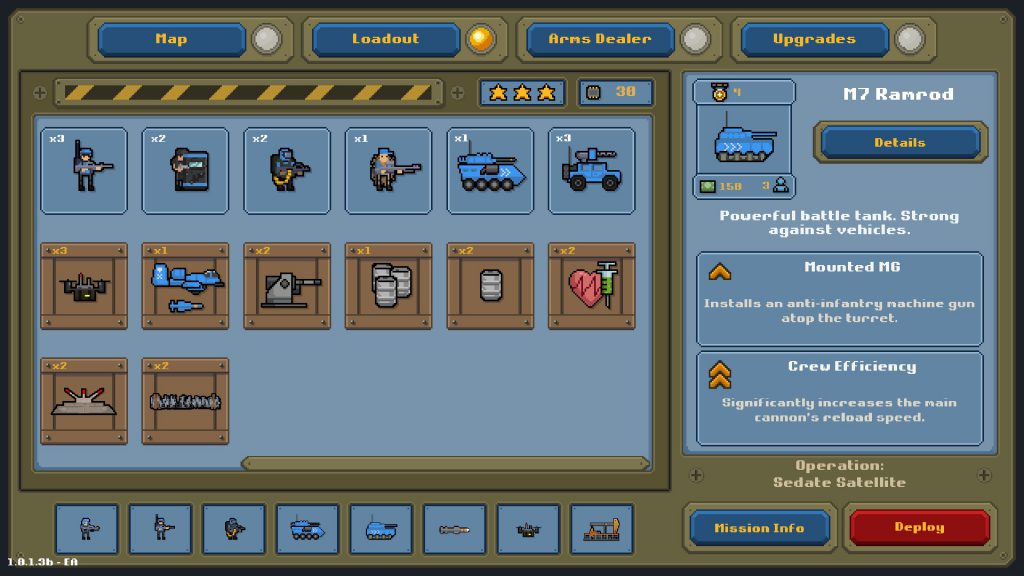 Thankfully, the developers are very active in the forums and seem to correctly use the early access to listen to feedback and improve the game, perfectly conscious that there is a hard balance to strike to appeal to both the casual and hardcore ends of the spectrum. While it means that the game can still change a lot and you shouldn’t take this present assessment as a final verdict on the game, this is also a good time to join and maybe inspire the developers with your feedback. As for myself, what I would like to see most is variety in the landscapes rather than only the “desert” background. 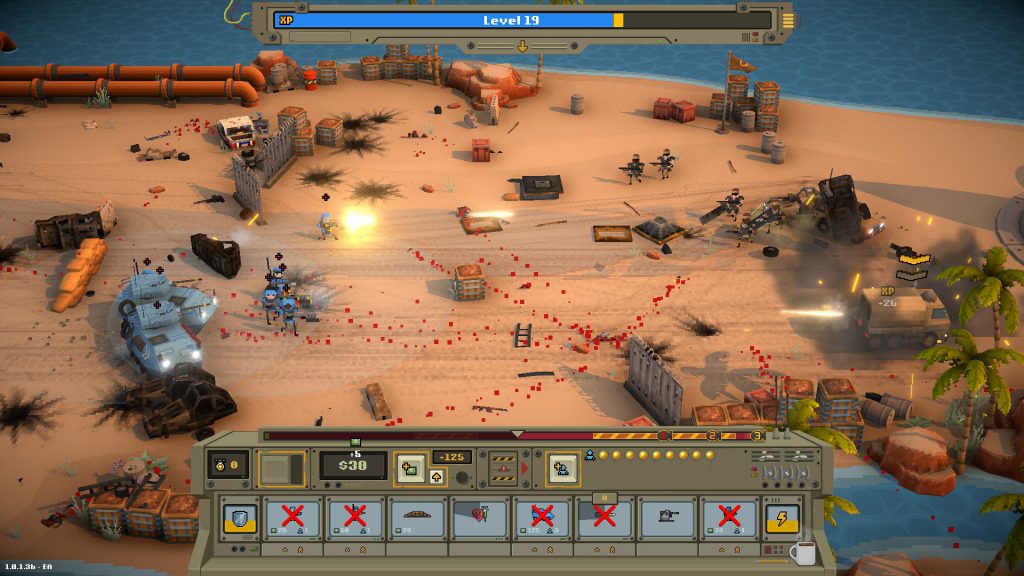 This is all the glitz and the glam of an RTS battle, but with all the fat, frenetic mouse clicks and “actions per minute” excised to retain only the bare essentials: tactical decisions and the resulting spectacle of pyrotechnics. I definitely enjoyed the pocket experience, and recommend it to any strategy aficionado that is looking for something different from the classic fare of base building and micro-management of units. Warpips is still in development, but shows great promise.