Manage and stabilise a war-torn developing country by funding services, winning trust, and dealing with the insurgent threat.

The Premise and Concept

Rebel Inc: Escalation is currently an early access title from the developers of Plague Inc. Rebel Inc has us manage the politics and socio-economic development of a highly unstable developing country. The country is never named, but it’s easy to draw parallels to the war-torn Middle Eastern and African nations of recent times. So, our role as a governor in each scenario is to bring peace and stability to the region by using international funding to implement programmes that will improve services, infrastructure, healthcare, education, democracy, and so on. It’s not a simple task as we have to keep an eye not only on our funding, but also on our popularity in each area of the region, the rising corruption, inflation, global reputation, and most of all – the aggressive threat from the insurgents. 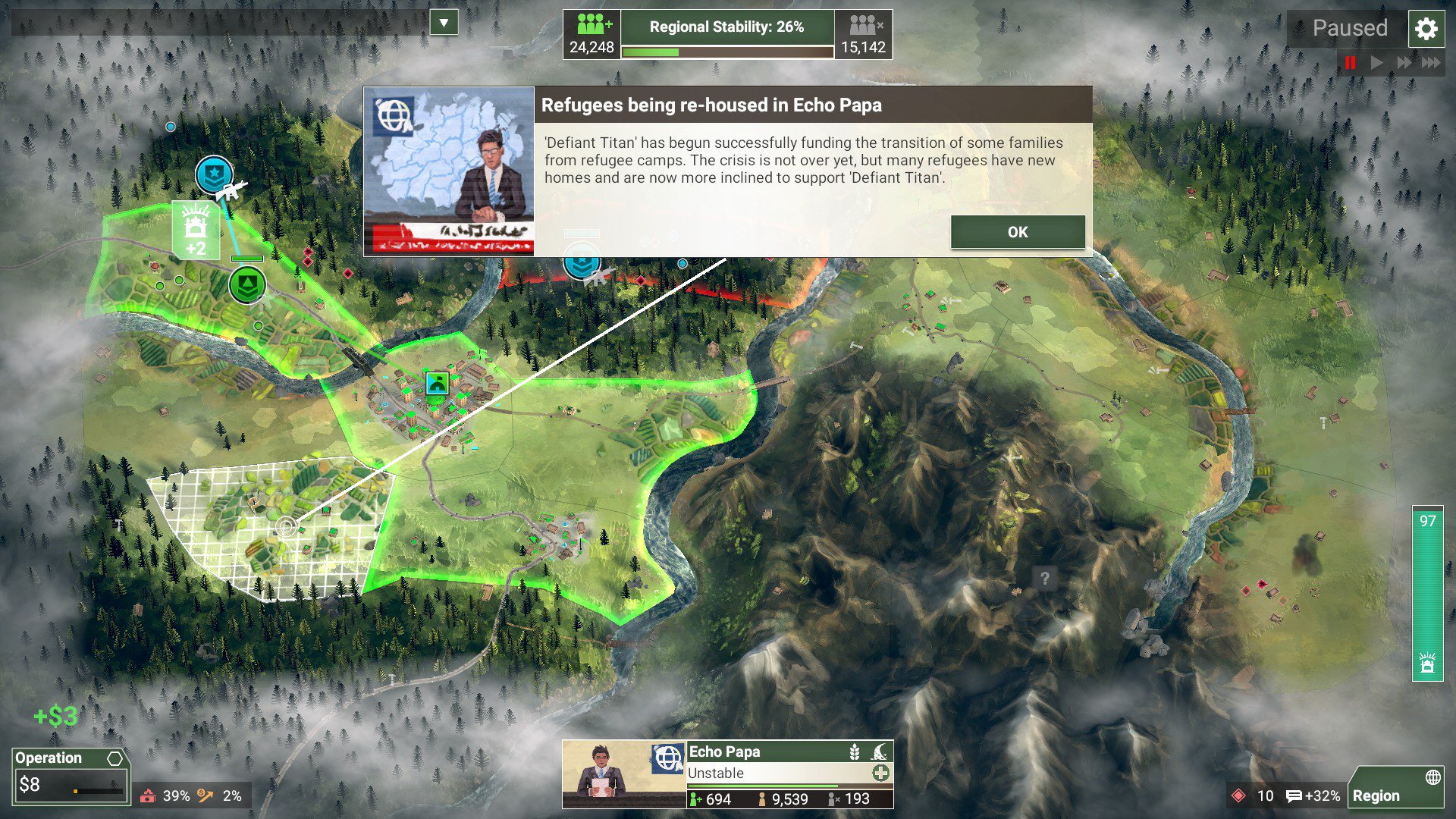 There are several different maps and game modes present. We can play each map as a standalone scenario, we can play them all as a campaign, and we can also undertake weekly challenges where certain rules and conditions are introduced.

When choosing to play a scenario, we can choose the type of governor we’ll play as, as well as any advisors. Each governor and advisors have their own perks that can help to steer the strategy in one direction or another. There are also three difficulty modes to choose from.

Once we begin a scenario, we have a map view broken down into different regions. Regions have their own characteristics – for example being urban, rural, or remote (in the mountains). They also have their own needs that pop up from time to time.

Our job is to roll out support programmes to every region on the map. However, we can choose in what order we roll them out, as we go along them akin to ‘skill trees’. It’s more beneficial of course to prioritise the roll out of the programmes that the regions need the most, but some other programmes also play crucial roles and can help us greatly. 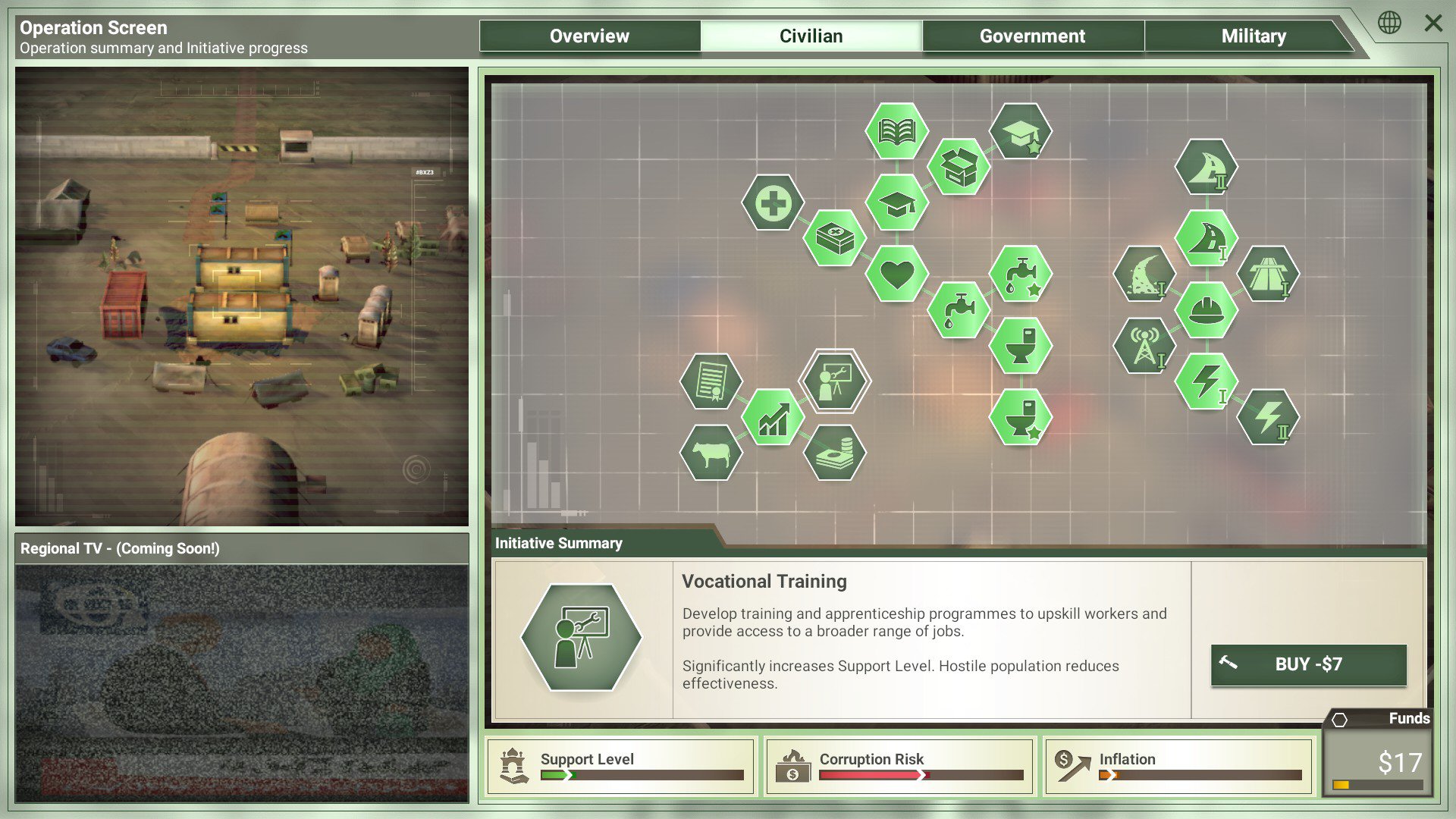 In addition to the support programmes, there are also government programmes and military ones. Government ones give us various bonuses and help to tackle some problems, such as the rising corruption for example. If corruption gets too high, we’ll start losing our global reputation. The military programmes help us to deal with the insurgent threat. Soon after we begin the scenario, insurgents start to appear at different parts of the map, attempting to steer the populace against us and make us lose reputation. It then becomes a battle for the regions. The more regions we control versus the regions controlled by the insurgents, the better our reputation will be and the more funding we’ll get.

There is a wealth of different military options available: 1) the coalition soldiers, who can be deployed quickly and are good in combat, but whose tour of duty only lasts a few in-game years; 2) national soldiers, who are slower to deploy and are slightly weaker, but whom we can have permanently; 3) airstrikes, which bombard insurgent camps and enforcements with good efficacy but also run the risk of civilian casualties; 4) drones, which are needed to quickly detect insurgent ambushes and camps, 5) garrisons, which provide additional combat strength to the soldiers that are stationed in that region. 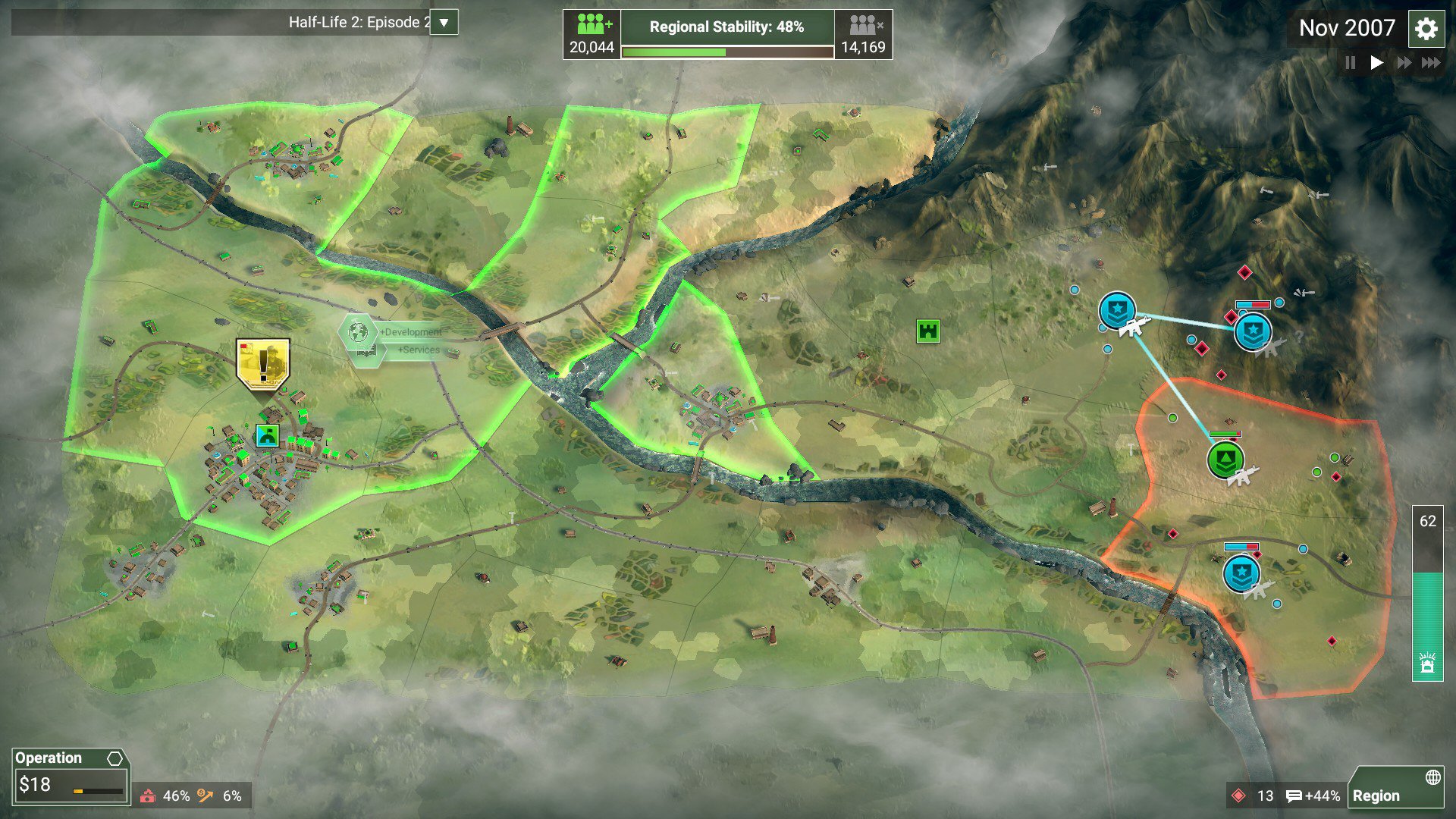 We can only have one group of soldiers per region, but how we place them is important, because in order to maximize their fighting capability, we have to put other soldier troops in neighbouring regions so that they have a synergy. Having a soldier troop isolated from the other troops makes them inefficient and unlikely to beat the insurgents in the region, unless they’re strengthened by a garrison. The insurgents never fully disappear. If we beat one group, another one will appear somewhere else, or they will simply escape to another zone. So the conflict with them is drawn out and we need to keep them suppressed long enough till the region is stabilised. 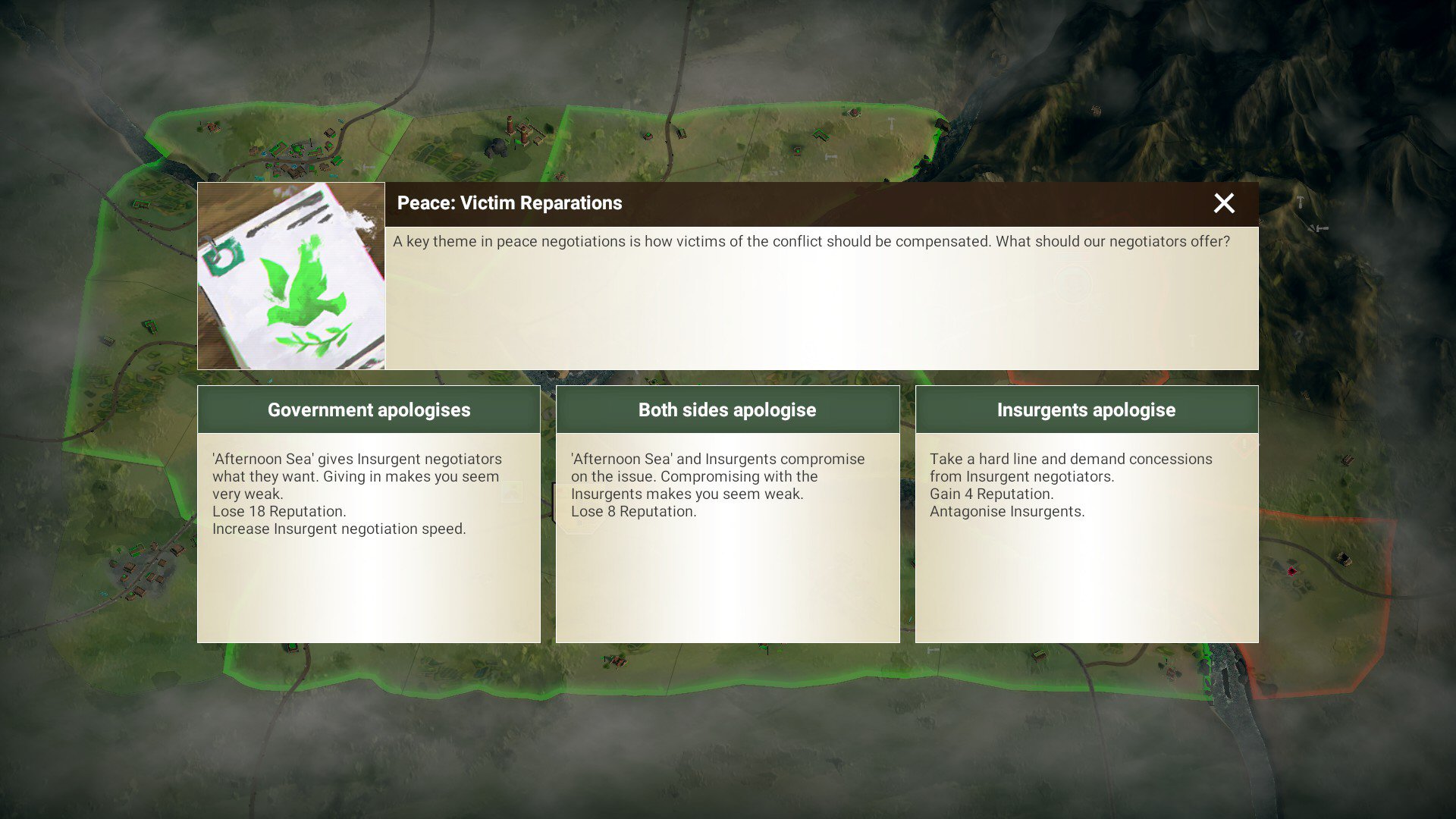 In addition to all this, the game has certain events come up from time to time. Most times, these events present us with choices, and overwhelming number of times these choices aren’t easy as they make us win in some aspects and lose in others. For example: Someone proposes to build a new hospital – you can agree to it and win trust in the region, but you have to spend money and there is a chance to increase corruption too (as it increases with every programme we roll out because crooked people are everywhere). Another example: Some ethical concerns are raised in some region – you can spend money to make the reforms, or you can ignore them, in which case you can get some backlash and loss of trust. And so on. 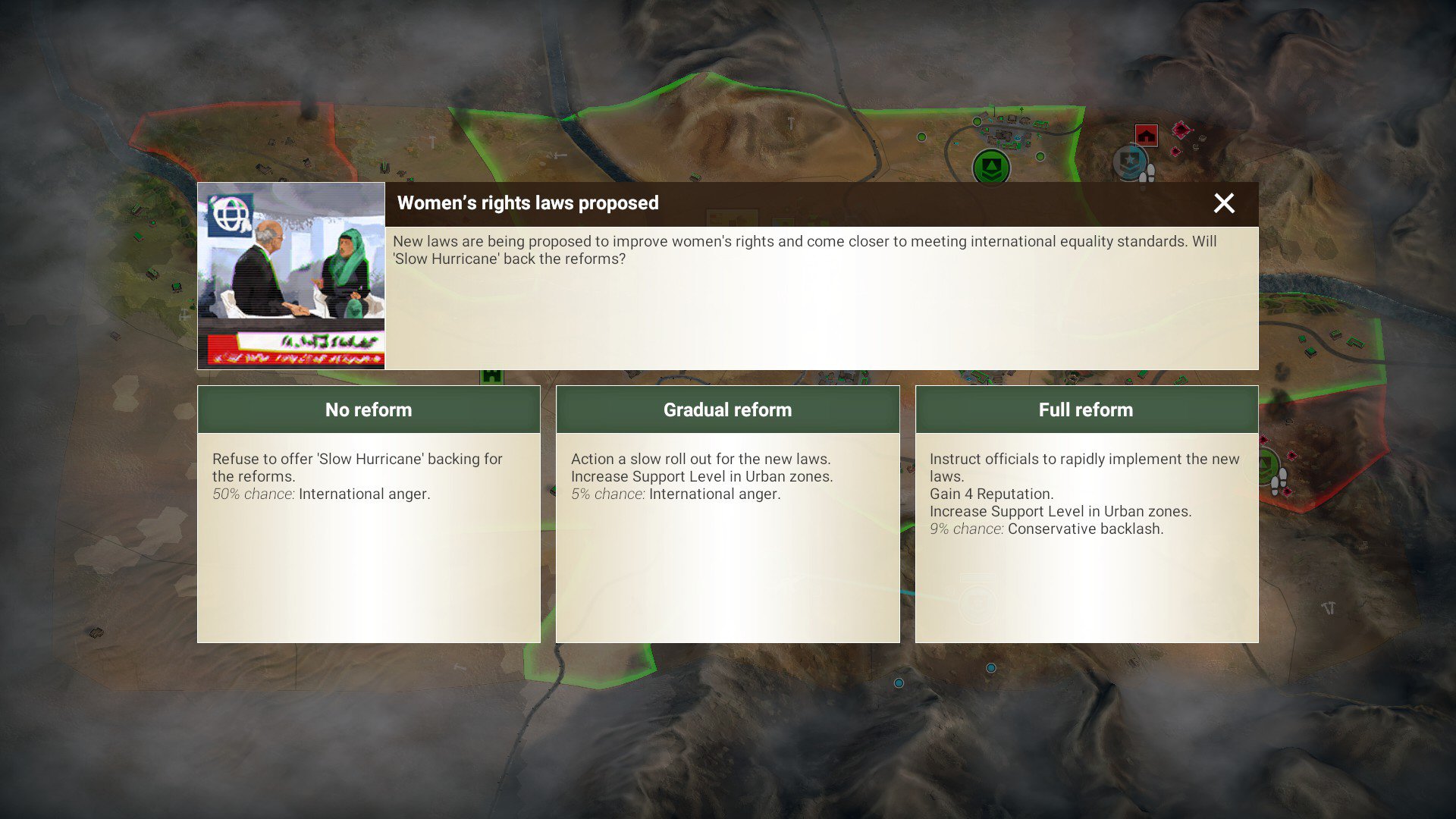 I really enjoyed the presence of so many difficult choices during the scenarios. They make you feel like an actual leader who has to weigh the pros and cons of each decision. And with so many things going on at once, sometimes hard or unpopular decisions need to be made.

The game generally has a lot of things to keep track of, which can make its learning curve feel a bit steep in the early stages. Some scenarios can feel even quite challenging on normal difficulty. Some of the scenarios also add extra things that we need to take into account. For example, the Azure Dam scenario has us not only juggle all the stuff mentioned already but also overseeing construction of a dam that needs to be fully built within a certain amount of time or else the area will get flooded. However, insurgents are going to be attacking our delivery trucks, so we need to think of ways to protect our supply chains. Another scenario like this is the newly released one – the Opium Trail, where both the locals and the insurgents are dependent on growing opium in order to make money. I enjoyed additions of such scenarios as they change the strategy and feel a bit different to the other scenarios that can feel too samey. I hope the developers add more such scenarios in the future. 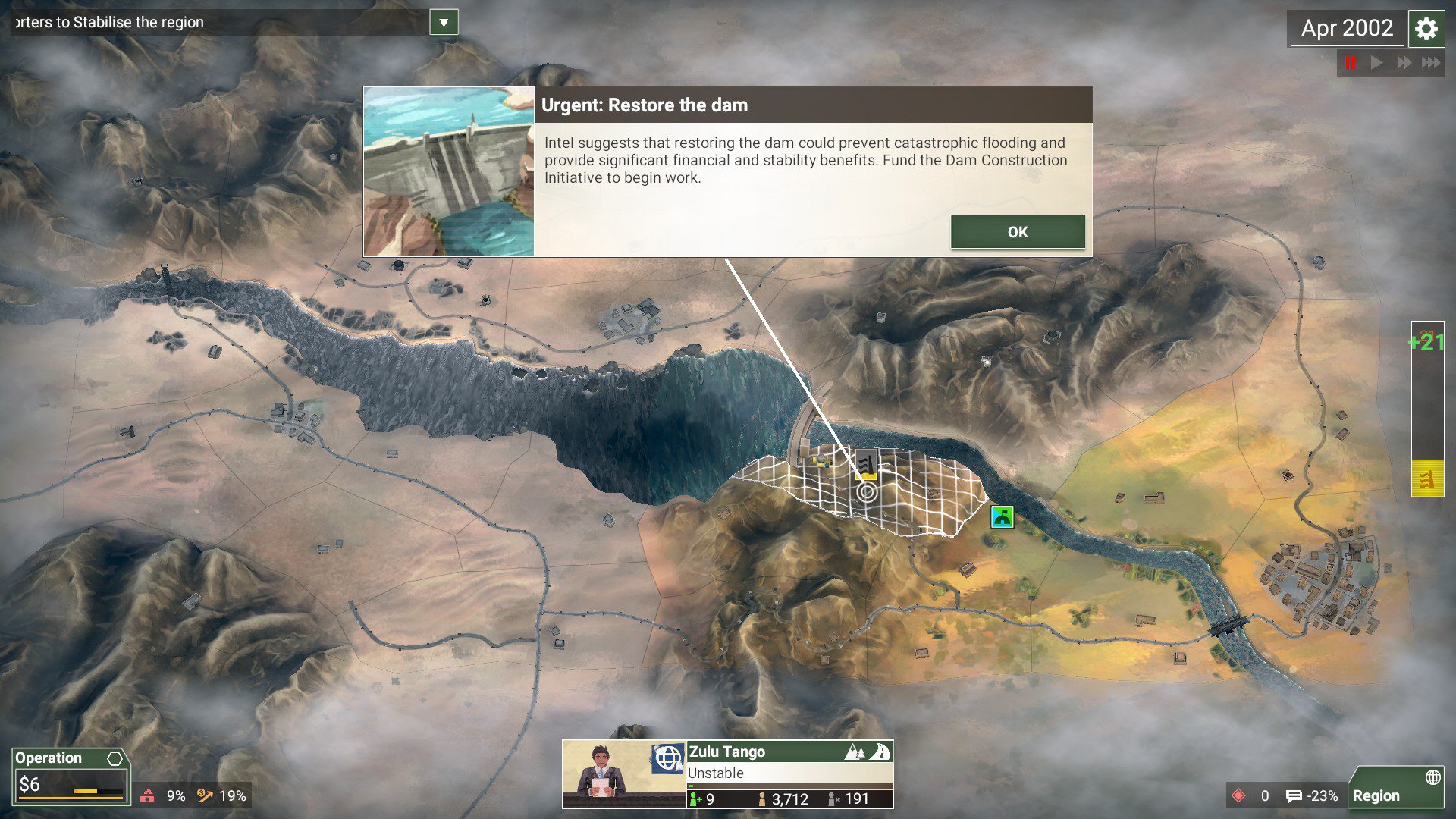 The developers have a roadmap of what they’re planning to add to the game during the early access as time goes, with things like scenario creator and multiplayer being planned additions in the future. It’s shaping up to be a really great strategy simulation game. It might not be quite as original as their previous game, Plague Inc, but it offers a lot already even in its early access, so it can only get better by the time the final release happens. 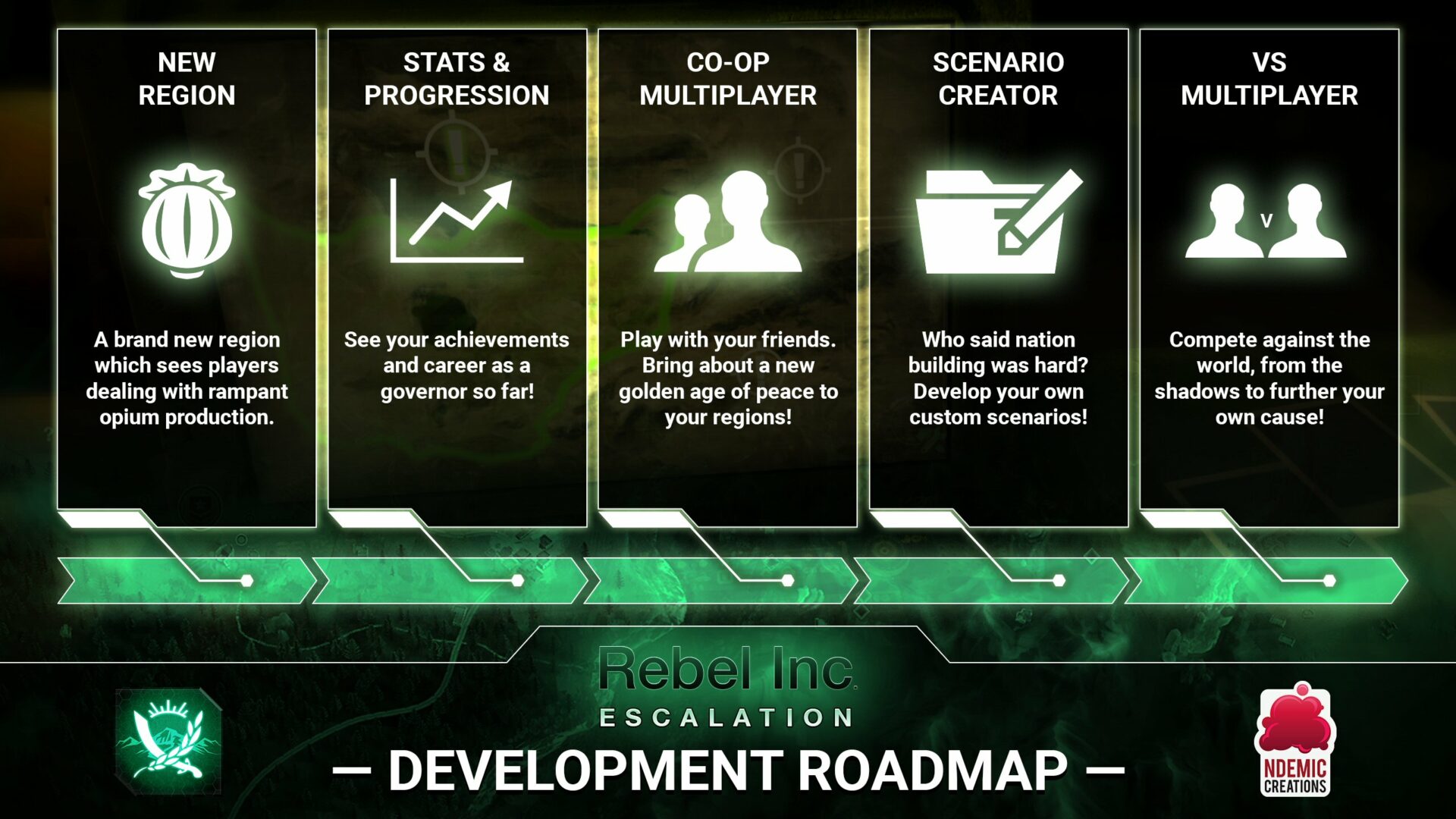 The map view is quite simple and straightforward, but still manages to convey the feeling of a living and busy country full of events. The menus are also easy to use and have a good graphical interface with descriptions for everything. When we’re presented with choices, the effects those choices will have are clearly given, e.g. “20% chance of international anger” or “+3 Reputation”. 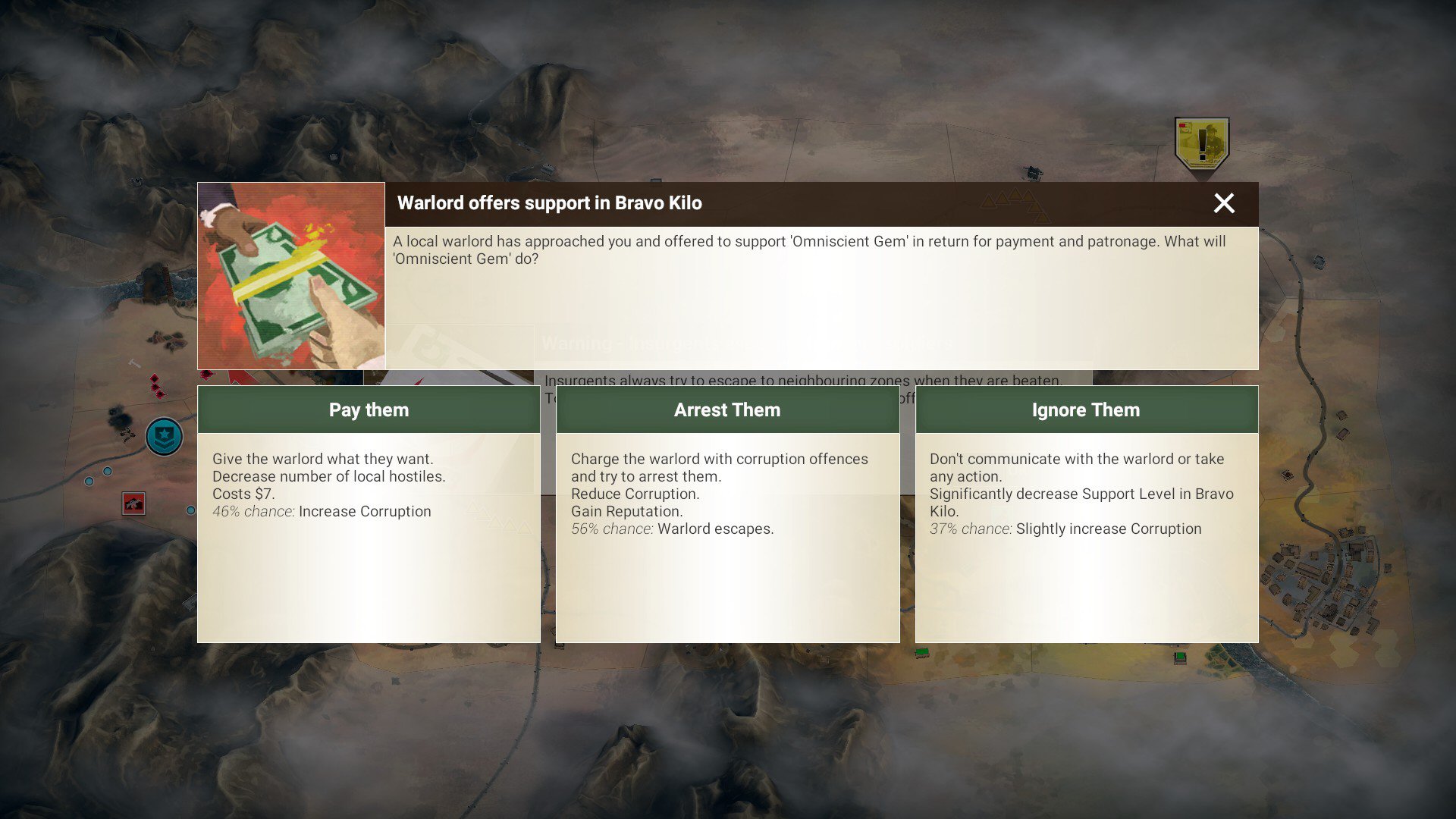 I also like how the troopers and rebels forces are indicated on the map, showing individual dots that move and give us an idea of how many rebel troops are in a certain region and where they’re escaping once defeated.

Music is pretty fitting to the setting and is generally nice to listen to. It doesn’t distract us from strategy, but it does provide a nice level of intensity and makes us feel that a lot is at stake. The sound effects are abundant and also enhance the overall experience. There’s no voice acting, though it doesn’t feel necessary in this game.

I didn’t come across any bugs, despite it being in early access, and generally everything is well-polished.

Rebel Inc is a fine strategy simulation game which already has a lot to offer in its early access stages. There is a lot of depth in what we get to manage when trying to improve a developing country socially and politically while fighting back against the insurgent aggression. The game can seem pretty hard at first as there’s a lot to understand in how everything works, but it all comes together very nicely and is great fun at how it cerebrally challenges the player. For now most scenarios do require somewhat similar strategies in order to win, but as more updates are done to the game and more content is added, this could change. In either case, it’s already got sufficient amount of content and this content is polished enough that it’s worth getting the game already.