SILENCE. Court is in session. Now let’s hear the tea.

Welcome to Internet Court, where you don’t have have to sit in a boring courtroom with (I’m assuming) horrible seats. Here, you can sit on your comfy bed or chair and in your comfiest clothes, sipping that tea, as long as you’re just a viewer to the current case. With those actually appearing really needing to dress nice, but not as professionally. Come on in, join the call, Internet Court is about to be in session.

Throughout Internet Court you’ll be going through four cases, which are surprisingly connected to each other in some way, where you’ll help one side rather than being in the jury (haha, jury in Internet Court? You jest). In Case 1, you’ll be introduced to the main characters you’ll be watching. We have Vick Burger, or Super Lawyer 64, who is the new prosecutor for Internet Court. This is his first trial and he’s not really that prepared as he got this job through someone else. And that someone else is the defense attorney, Dinah Goodwin or Don’t Stop Defending as she’s known in Court. We learn more about her later on, but she totally views Vick as a total loser that can’t possibly win. And finally, we have Judge Doodles. He’s obviously Internet Court’s judge and he doesn’t seem to be taking this whole thing seriously (well, Internet Court isn’t as serious, but he’s even lower than that) and seems a tiny bit incompetent. In this first Case, you’ll be dealing with the horrible crime of unfriending someone without any warning. You help Vick here as he tries to prove that Kristy did nothing wrong and Mary Anne unfriended her with no warning. And, well, you have a surprise in store as you get further in as you examine evidence and hear testimony. 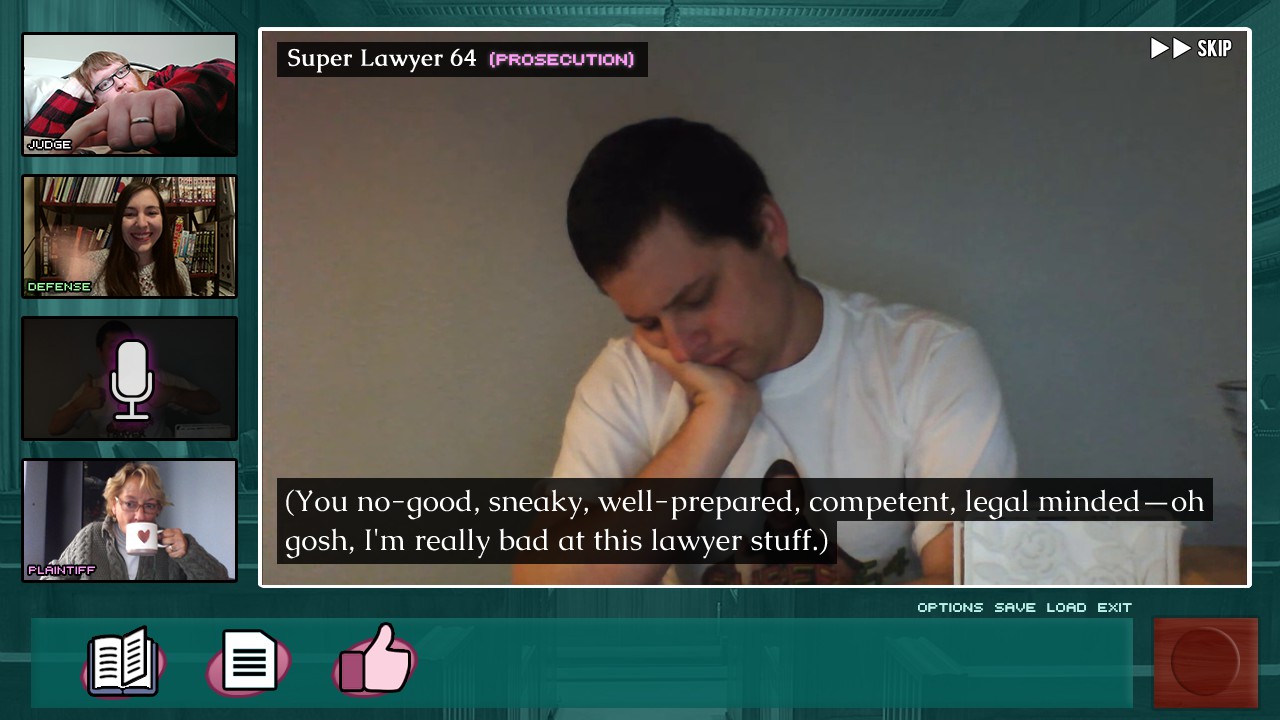 Case 2 has you help Judge Doodles and gets you some backstory on him and Dinah. A specific previous case was mentioned in Case 1 and here, you’ll be able to see what happened during it. This one is about fanfiction and is dubbed as the “Contrived Cliffhanger”. It turns out that this case was turned into a training simulator for judges and this has our own defense attorney as a prosecutor. And our current prosecutor is even a client which this case is against. Case 3 you’ll help Dinah as you deal with a fraudulent ad for a tattooer and her client is not happy with his tattoo (which painfully has bad grammar and a misspelling). And finally, Case 4, where we circle around back to Vick as we deal with a Welp reviewer that gave Internet Court a terrible review. The Internet Court group finds it fraudulent, not to mention that this is headed by a known troll that gets mentioned in the other cases and Dinah is especially familiar with.

You’ll also meet other characters along each case, which I can’t help but not mention that my favorite one is the Grammar Cop. All of his scenes are just gold, especially his audition tape. 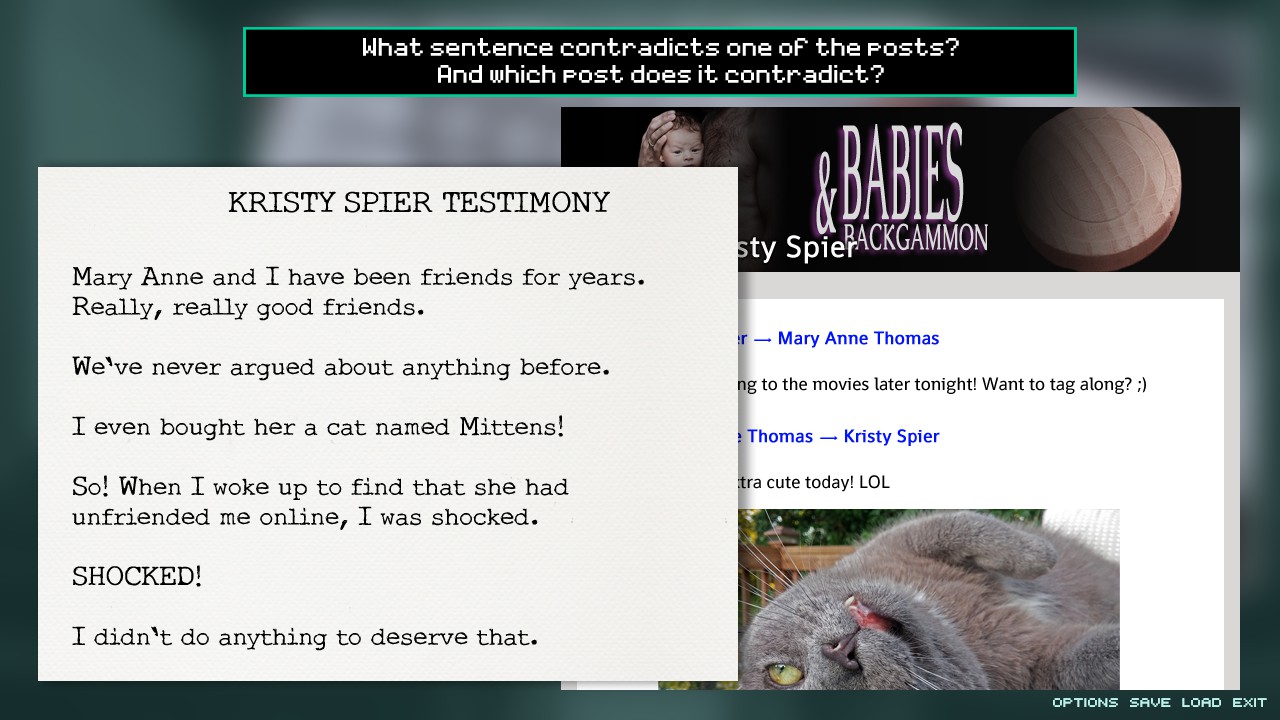 So, how do you interact here? Aside of being able to slam your own gavel that will shake the screen, you’ll be handling the evidence and any questions that need to be answered. Every so often, you’ll be asked whether the person you’ll be helping should interject, be asked to answer a question aimed at you correctly, or even look at evidence to find what you need. You’ll be tasked with highlighting mistakes or contradictions in the evidence, which you might have noticed when you were shown it the first time. 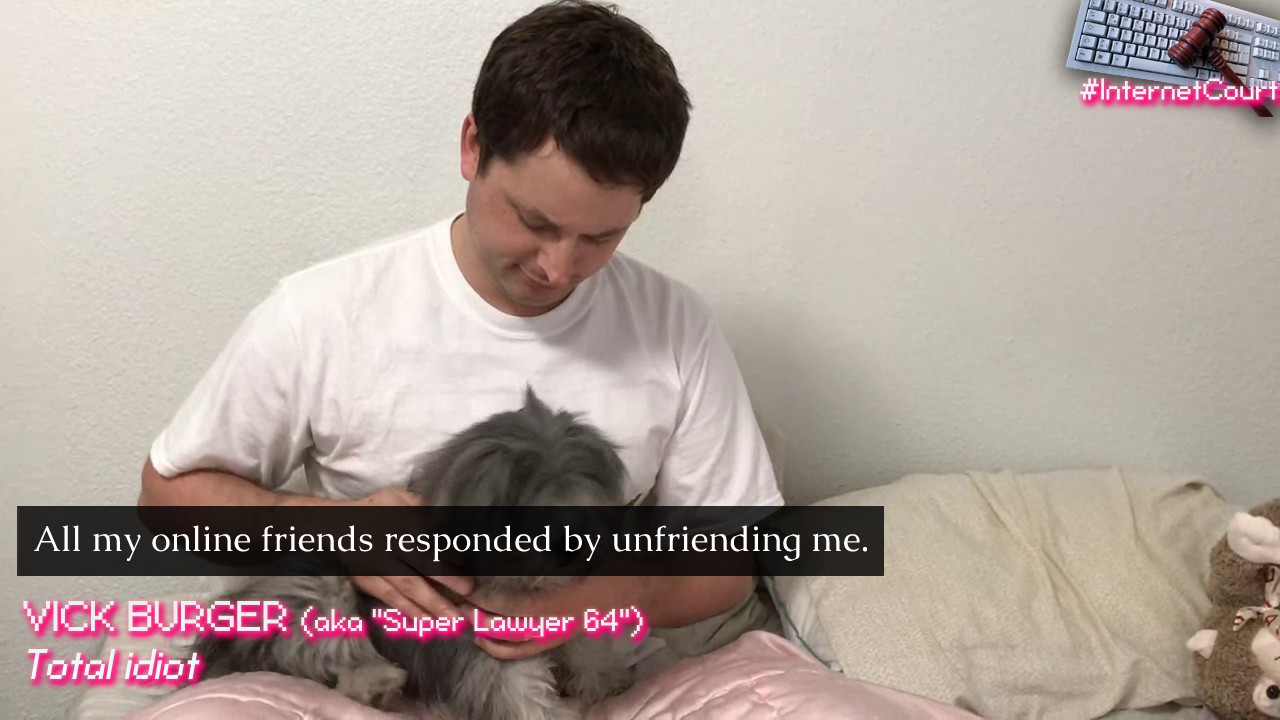 And while there isn’t any branching paths here, as you’ll be going down a single path to a pre-determined end, you can fail. In Internet Court, the lawyers get strikes and will be pushed out if they get three and will most likely lose their case as they can’t defend their client. You can get a strike by getting a question wrong, though there are some that do give you freebies. While this might not be something you should aim for, I have to say that the failure ends are pretty funny (especially Case 3’s) and it won’t hurt to fail just for that. Luckily, if you do fail, you do get the option to retry, where you’ll be put right at that question with no strikes. If you want to go back to a previous case to see the failure ending (say, if you didn’t fail until a later case), you are given a skip so you can skip past all clips and quickly get to questions. 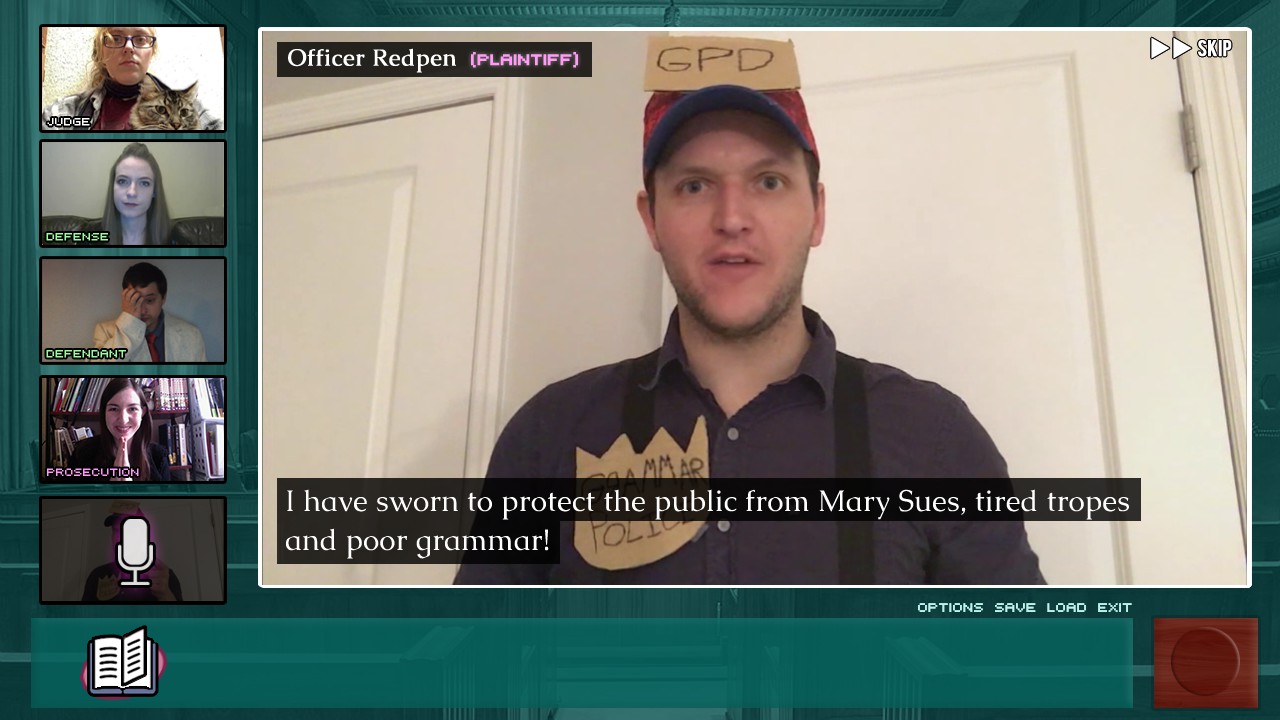 I’d say the only negative aspect this has is that you can’t pause (at least, not to my knowledge) which negates the ability to click any options until you get to a stopping point that still has them on screen. So you can’t look at the log if you happened to miss what someone said, look at evidence again (though, you really don’t have to and there was only one instance where you would need to look back), and you can’t click any of the options that would let you mess with the options if needed, save, load, or exit the game.

After you finish a case, in addition to the next one being unlocked, you’ll also unlock the outtakes video to watch. And, once you finish all four, you get to see the audition tapes and a character warm up that one of the actors did to get his voice ready. 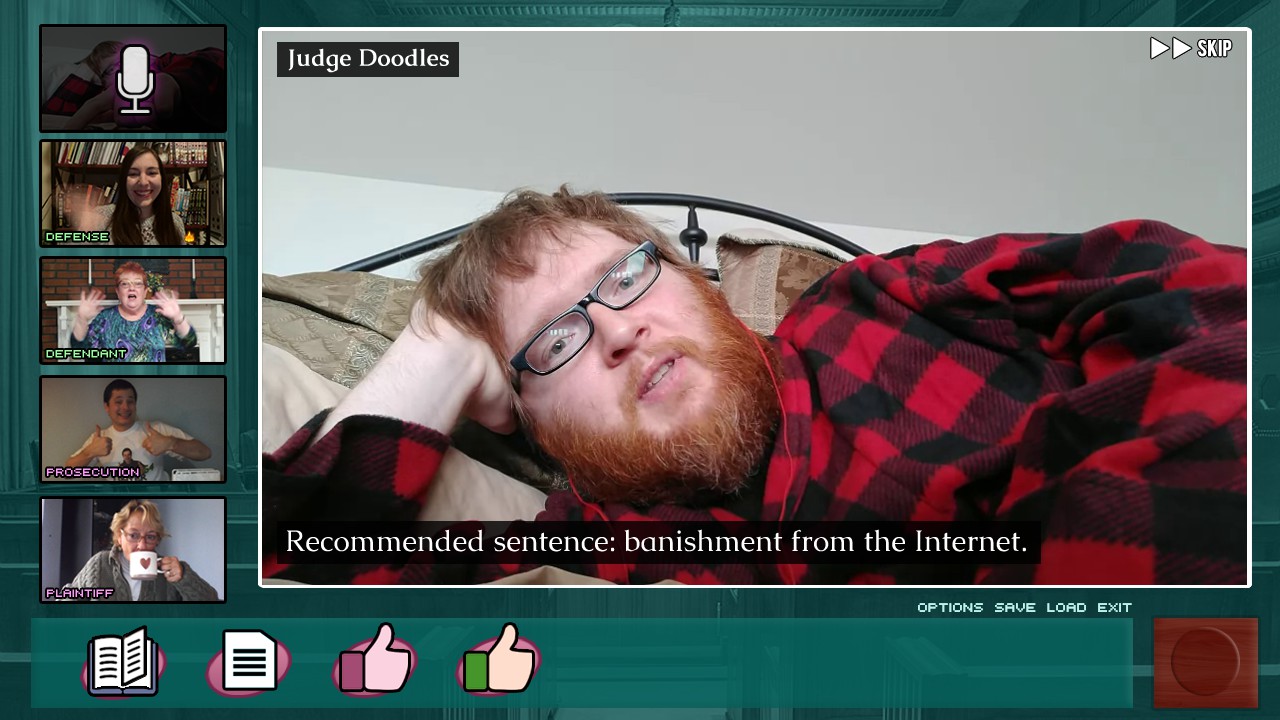 As long as you’re not expecting a serious game (which, you shouldn’t in the first placed since it’s advertised as comedic and it’s obvious from the trailer), this is a good way to pass an hour or two as you laugh at the jokes. It’s a silly little game that doesn’t really take itself seriously throughout all four available cases. And for production, while it’s not professional as many FMVs coming out in recent years, it really makes sense for this title as these characters would use what they’d have at home, no matter how terrible their webcam, lighting, or mic be. Despite this, everyone does a good job bringing their characters alive and I do hope they had as much fun as it seemed. So if you’re a fellow FMV fan that doesn’t care this isn’t a serious project and want to get a few laughs in, pick up and join us in Internet Court.