Is it bad that I kinda still want to try out streaming?

Man, how many of us haven’t thought about making videos or streaming ourselves playing video games, and even dreaming on beating all the odds (or being really lucky) of becoming popular. Or, well, at least having a dedicated fanbase that comes back to your videos. Well, Watch Me Stream My Mental Breakdown aims to put you through a gamified version on how streaming will most likely go for you in reality.

Here, you take the role of Pochi who happens to literally be a talking panda (though, considering Pochi’s viewer count, this doesn’t seem to be as surprising in this universe). Like a lot of people dreaming about or first starting, Pochi is optimistic that pursuing the life of being a streamer with a focus on games as something that can give him a prosperous future. And the fact that Pochi isn’t exactly a school person, not really putting in the time to study or get enough rest for tomorrow’s class, pushes him forward to start his own channel. After all, Pochi is only in college because his family wants him to. Not even Pochi’s friend, Arisa, believes in you as she makes fun at your decision (and your channel name, wow rude) and your father not being supportive turned Pochi away. Will you get Pochi partnered and show everyone, especially your dad, wrong? Or will it just simply not take off? 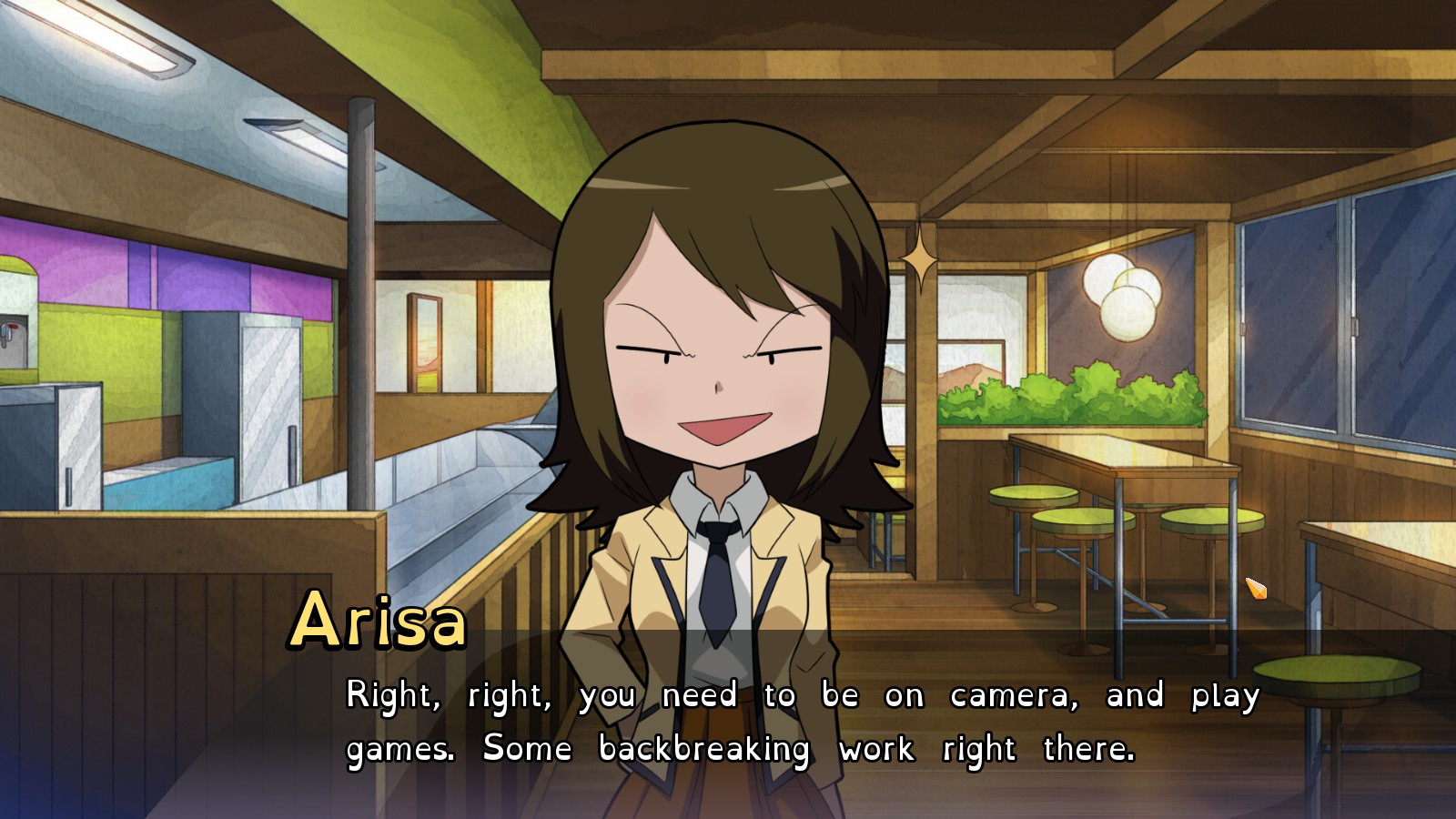 There is a light story going on as you’re trying to make a streaming career. This mostly serves as a cap to how long you can go, but there are a lot of real aspects that Pochi will run into. The lows of chat being toxic (though, I never joined a chat that was this constantly toxic); how MCNs take advantage of people by telling them they’d help them get partnered and everything, while in reality, they do nothing but take part of your earnings; how viewing it as a grind and overworking yourself is unhealthy; don’t put all of your eggs into the streaming basket as you won’t immediately make enough money to pay bills; the devastating feeling that someone else can start later than you did and be more successful than you (which, fun fact, did happen in my friend group); maybe you just don’t have the personality that draws people in; and DMCA takedowns. These are all hard realities and luckily, we’re experiencing them through a game. 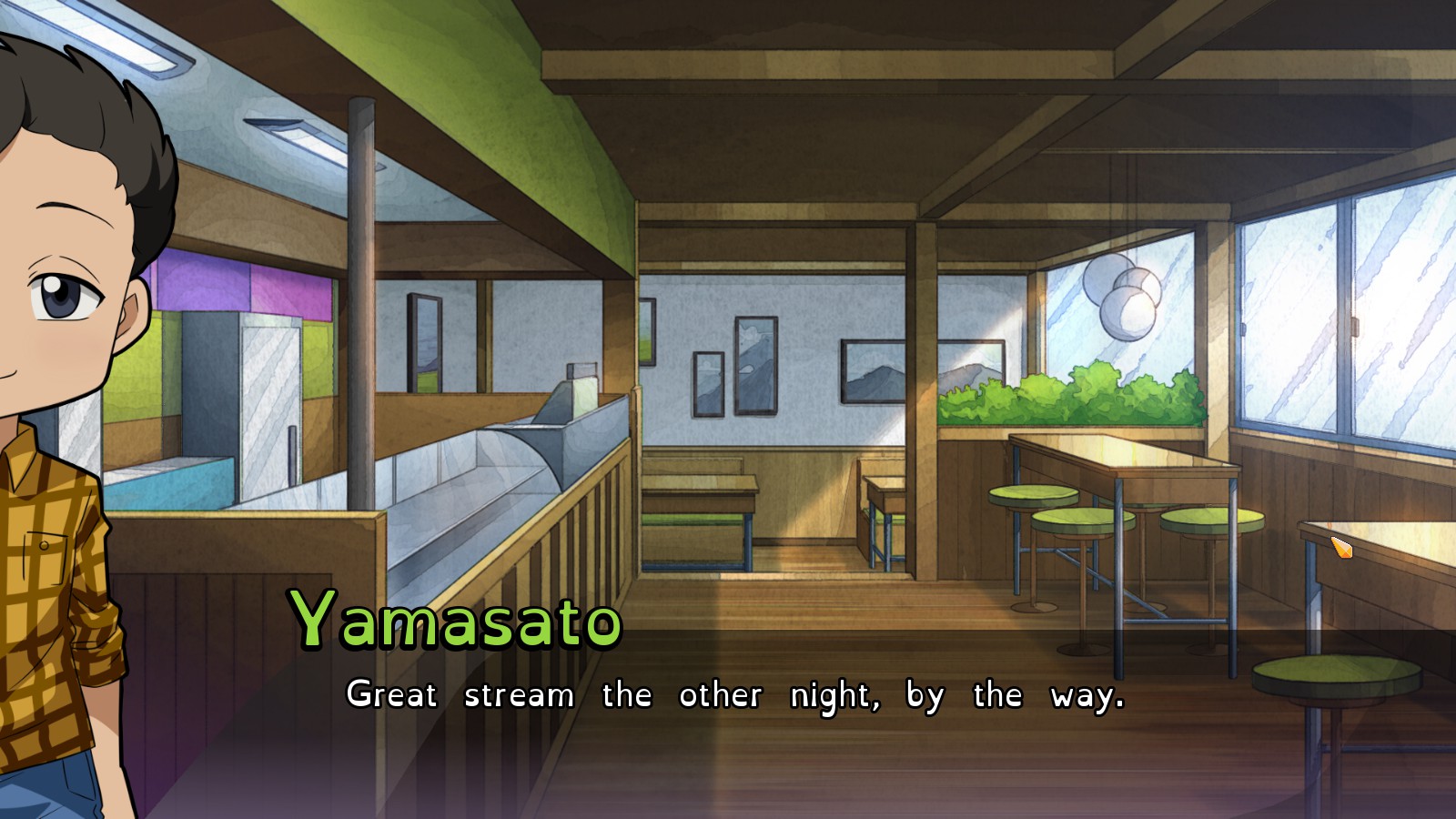 Anyway, most of the game takes place in Pochi’s small apartment where he can easily go from sleeping to streaming. While this is a game about starting a streaming career, this does have resource management put in. Pretty much every one of your resources are important to keep your eye on as this can cause an easy game over. You have to keep an eye on your money as it’ll chip away as you pay rent, buy food, and buy games to stream. To keep your head above water, you’ll need to work some jobs (which all of them is a button masher minigame) where you’ll get paid, but you’ll also take a hit in your mental health or HP. But then, you need enough mental health to get through streaming so you can build up your audience and not have a mental breakdown while streaming (which loses you HP). You can even die if you neglect your HP. The only way to improve your mental health or HP is to take a break or at the end of the month where you’ll choose what to eat and your weekly activity. Basically, everything is connected and flows into one another. 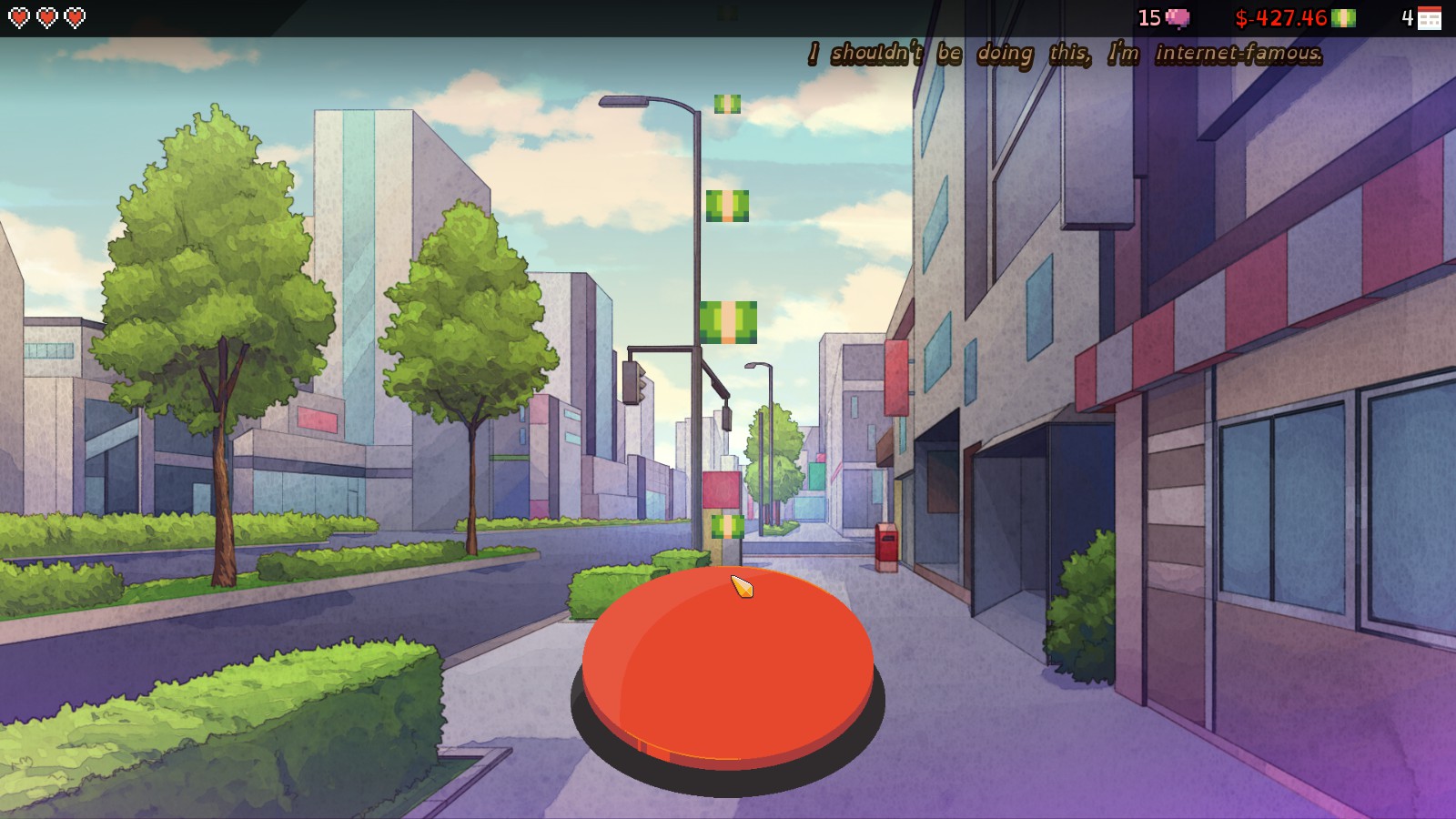 Considering your choice of either streaming, resting, or working takes up a whole week, it makes it even harder to juggle and try to gain more followers and subscribers. I’m a bit surprised we didn’t get a game where you’ll juggle your streaming with a job and keeping your college work up, but this isn’t what Watch Me Stream My Mental Breakdown as it focuses more on those that want to drop school to be start being a full-time streamer. Plus, it would make this way harder. For what it is, it does well at making you choose.

Now onto the meat of the game, streaming. Streaming was turned into a simple, but complicated, card game. Each one of your cards is either under the Ego (red), Shewdness (green), or Knowledge (blue) type which loosely determines the card’s effect and even boost something depending on how many are in your deck (which I didn’t notice at first) like Ego will give you a starting shield. Before you do start streaming, and edited your deck, you get to choose what you’ll be playing and paying. Other than the free retro game option, the game genre for that week’s indie, stale big title, and hype of the week changes. 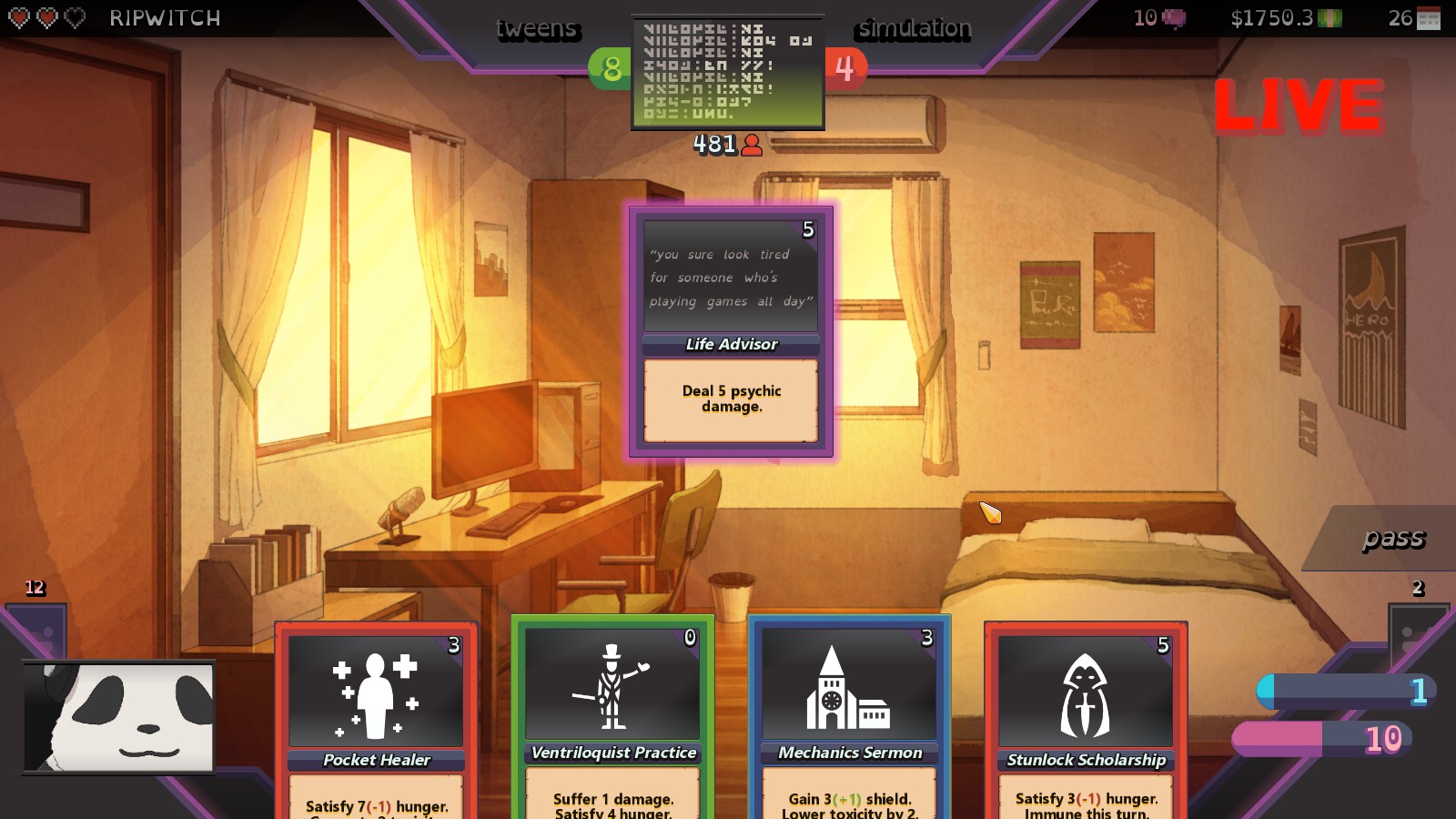 Of course, you can go with not spending anything on games, but there are modifiers where the game can be undeserved or crowded, which I’m guessing determines how many viewers will show up. So it may be worth paying for a game that’s undeserved. Though, there is another layer as the genre will boost and decrease the effect of certain card types. You also have your audience that have expectations and will favor certain types than others, but as far as I can tell, you don’t have much influence on this (which yah, fair). 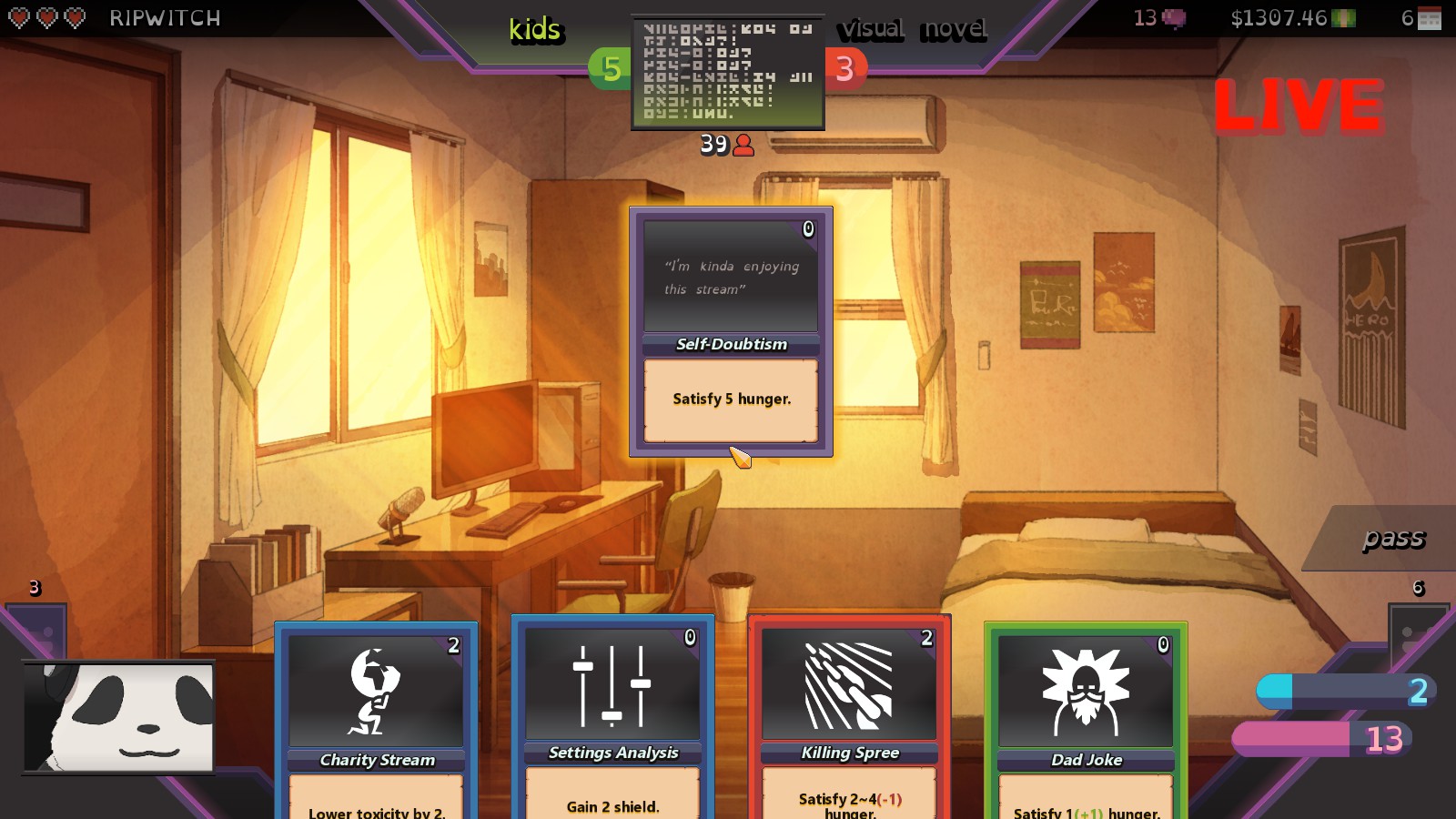 Once you start streaming, you’ll be going against your viewers as both of you will put out cards. They hunger for content (so true) and your goal is to satisfy it by reducing it to zero. However, you’ll also have to deal with your chat’s toxicity level which increases each round. Toxicity is good in a sense that it lets you play more powerful cards in your hand, but at the same time, chat will be able to play powerful cards too and a high toxicity is not good for being advertised. To fight against that, your cards will either satisfy hunger, give you shield to block chat’s attacks, and cards that will lower toxicity. There are even cards that will have a continuous effect (under certain criteria) or will have an effect after a certain amount of turns. So you’ll have to play a delicate balance of both keeping your stream up so you can get more viewers (and thus more followers and hopefully subscribers), satisfying the chat, and keeping your mental health above zero so you don’t have a mental breakdown. This may seem easy, but it’s not. Chat gets brutal.

After you close down your stream, which will normally be when you satisfy your chat’s hunger, you’ll see what you earned as well as being scored out of five stars. Your toxicity at the time of ending does determine your score. Your score will then pile up and every time you get five stars, no matter if it was that stream or over a couple, you’ll be able to choose a new card to add to your deck.

Also, I like the touch of having a chat screen that will be active between rounds and that there’s a chance at getting raided. Not to mention the chat’s cards are just what they typed (and how Pochi will notice nice comments once in a while) and Pochi’s cards encompassing what he’s doing or saying (like having a pizza break or just making puns). 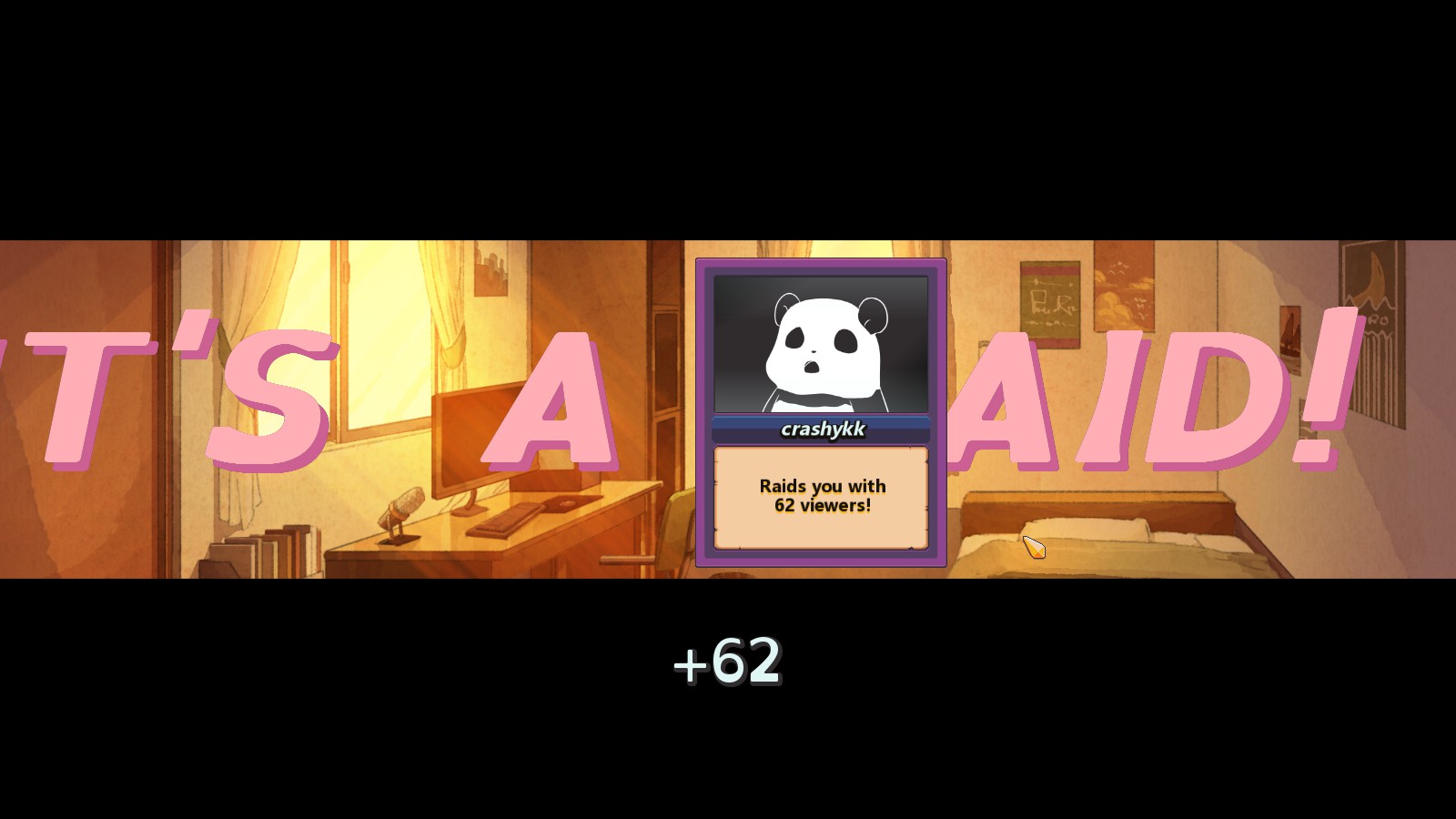 There are various different endings you can achieve, with the prospect of getting partnered being the hardest one of all. At the end of most endings, you’ll receive a Legacy Card which is added into your starting deck (with the most common ending having a lot of Legacy Cards for you to get). These can give you help in your future runs and may even be needed to reach the Partnered Ending.

While I was writing, my only complaint, that I wish there was an option to make the button mashing job minigame easier on our hands, was resolved with it detecting letter keys so you can fake type. So, there’s that.

Despite thinking that Watch Me Stream My Mental Breakdown could be a bit cheaper, this is a challenging resource management-card game that is equally fun and frustrating. Plus, for those that don’t normally play deckbuilders or are bad at them, this game doesn’t put as much importance at your success being dependent on your deck being tight and trimmed. It still helps here, and there are cards that synergize, but you do get boosts for how many cards in a type you have in your deck. I may not have any personal experience from streaming, but I do think it captures what those chasing the dream of making a living off of dreaming pretty well.

This does encourage you to have multiple runs, which generally take at least an hour to a couple. You can even check out your best run, as well as your latest, to try and best it. 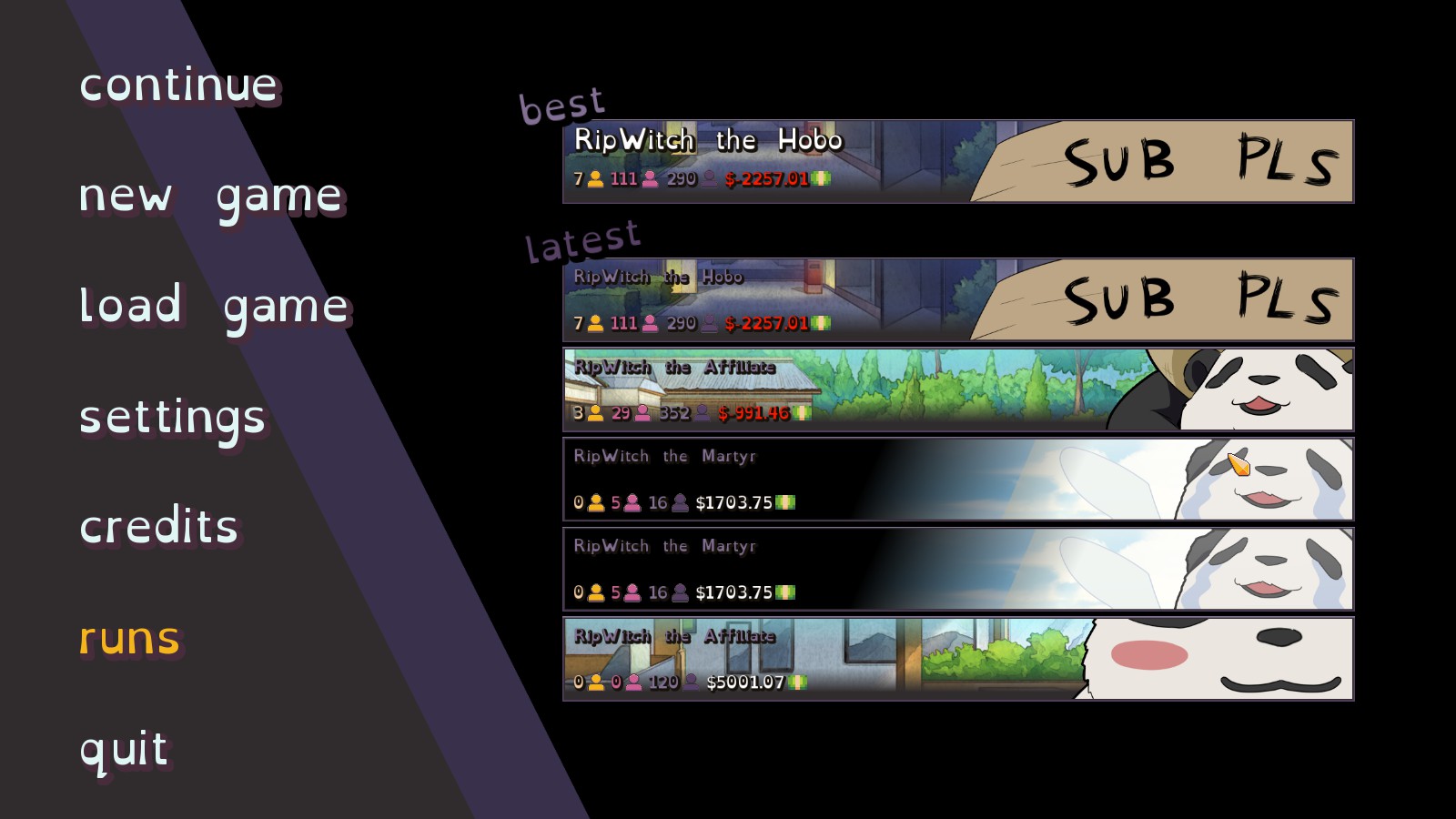