Solo dev Ares Dragonis managed to pull of a rather impressive piece of gaming here, that surely will please fans of horror and Lovecraft alike. It’s not perfect however, while the proposed full price is almost out of market compared to the small content amount.

The Shore is a first-person narrative adventure set in the mid ‘900s, inspired to the Cthulhu mythos’ lore. Players impersonate the member of a sailor crew, that got stranded on a mysterious island where unexplained events happen regularly. Between distorted space-time and elusive dark beings, the protagonist will have to make his way through a madness-inducing land.

Excellent world-building / atmosphere.
The Shore features a definitely solid art direction level, when it comes down to world representation and environment design. Each location has a distinct color palette, chromaticity and dominant theme that sets it apart from the others. From the calm but eerie island shores to much more disturbing locations, every setting is well crafted and rich in details. Documents and examined items also have good levels of care in their making.

Quality audio department.
The ambient sounds and music tracks dominate the atmosphere of this game, kicking in mostly at the perfect times to emphasize events – as it should be with any good cinematic-oriented production. Voice acting on the other hand is only of passable quality overall, with some ups and downs depending on the situation. The sound compartment’s contribution in building the eerie feeling that dominates each location, is surely significant.

Good gameplay variety for the genre.
For a narrative adventure, The Shore has an above-average diversity of gameplay situations. From exploration and rather classic item-based puzzles, to more unusual combat phases and chase sections, the game proposes a good variety, especially in relation to the total short duration. In addition, several achievement-related secondary areas are present, to also shed a bit more light on the lore… or the opposite. 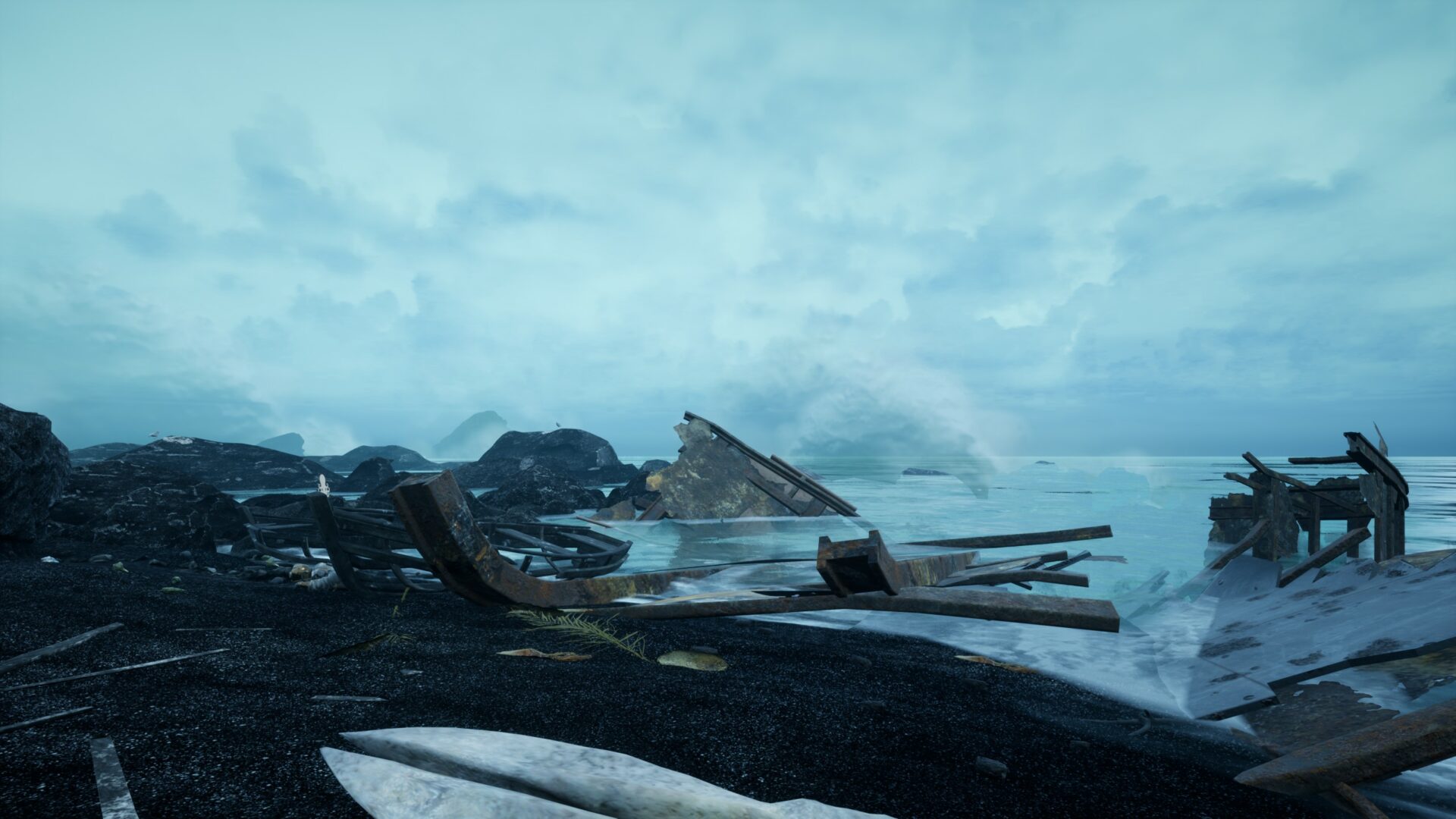 Very short for the proposed price.
The proposed price of 21€ (25 USD) is really out of line considering the short duration of the game, and no replay value (as expected from the genre). While it proves to be a good quality adventure, that doesn’t justify a price to content ratio of 7€ / Hour, which is actually pretty grim all things considered. I highly suggest waiting for a significant discount before buying, even to fans of Lovecraftian settings.

Subpar optimization level.
Even on a reasonably high-end system, The Shore has proven to be quite an heavy task to run, and unoptimized at that too. Especially in open-air areas, slowdowns and framerate drops were not uncommon at all in 1440p. The fact there is no Exclusive Fullscreen and as consequence no in-game Vsync, further accentuate the already present issues. There surely is more work to be done in this field.

Gameplay design issues in a few sections.
While most of the puzzles, action sections and exploration segments are fairly well designed, a few of them stand out for being rather subpar. Certain combat situations prove frustrating due to infinite-respawn enemies and unreliability of the “weapon” at players’ disposal. A few puzzles prove to be especially obscure in their logic, without even a small hint to guide players – that can definitely become frustrating. 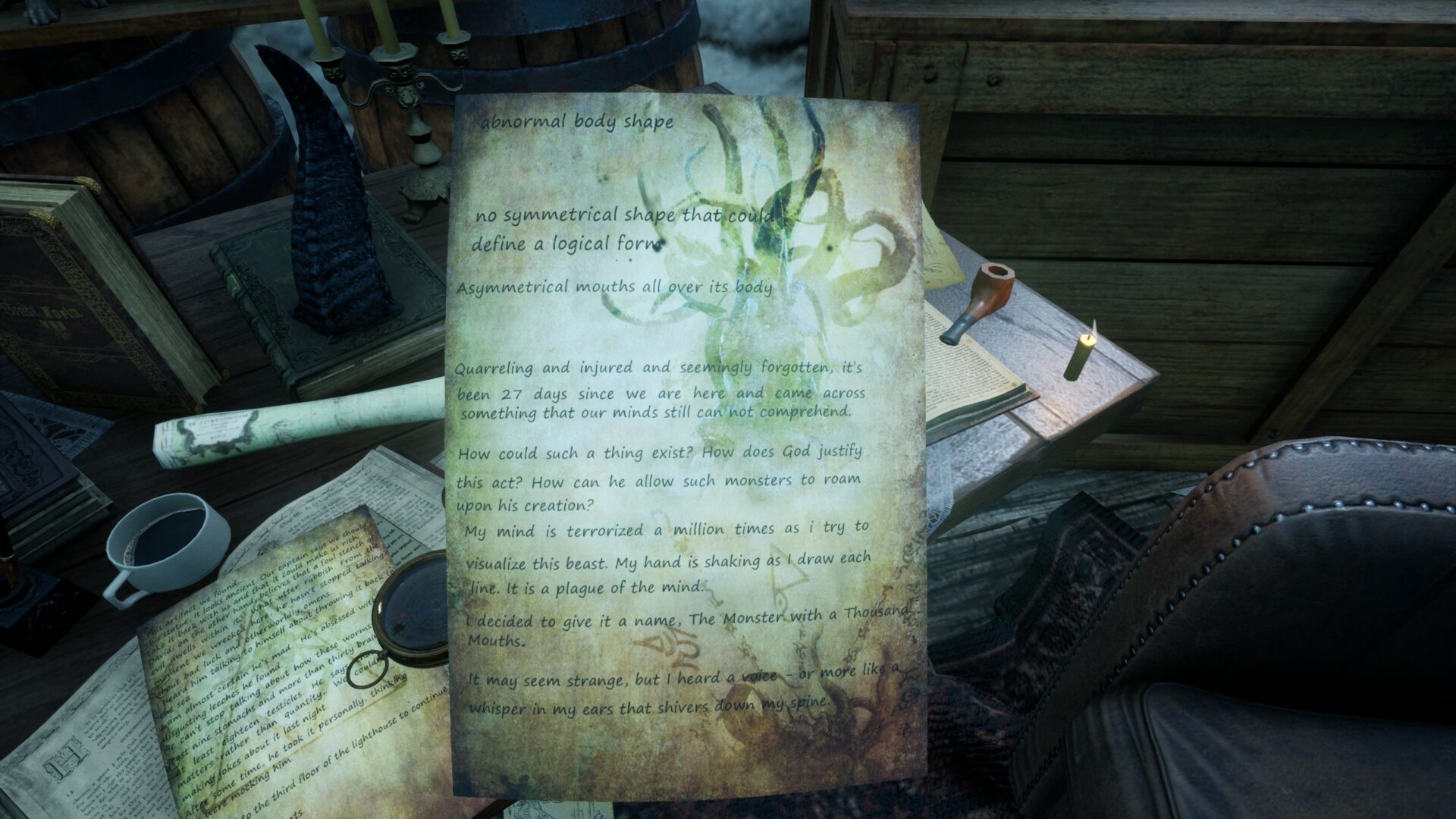 Exploration
Is performed on foot across the island, and later on also in caves and other depths. There is no map, however environmental clues lead the player, such as signposts or strategically placed lights. Location layouts are fairly linear, with but a few secondary areas where one an find collectibles, lore items and the occasional achievement-related goal. There is no point in exploring out of the main path, except for finding such things, that given the game’s short duration, give some more longevity to it. Generally players can’t die while exploring except a few select locations, and in that case checkpoints are rather abundant.

Puzzles
Are generally based on finding the correct item for unlocking a passage or path, especially in the first part of the game. Later on, when more tools are at players’ disposal, puzzles may become a bit more elaborate as they involve the operation of unknown machinery and other “arcane” structures. This includes rituals as well in some parts. Apart from a few quite obscure puzzles, they are never too difficult or tedious.

Action Sequences
Involve escaping from or fighting unimaginable horrors straight out of the Lovecraftian mythos. At some point, an artifact is acquired and used to defeat such monsters. However, in some situations escaping is the best solution. Combat proves to be rather unreliable at times, because the artifact isn’t consistent in effectiveness or accuracy. There is even a proper boss fight at a later stage, which is something not often seen in this genre at all. 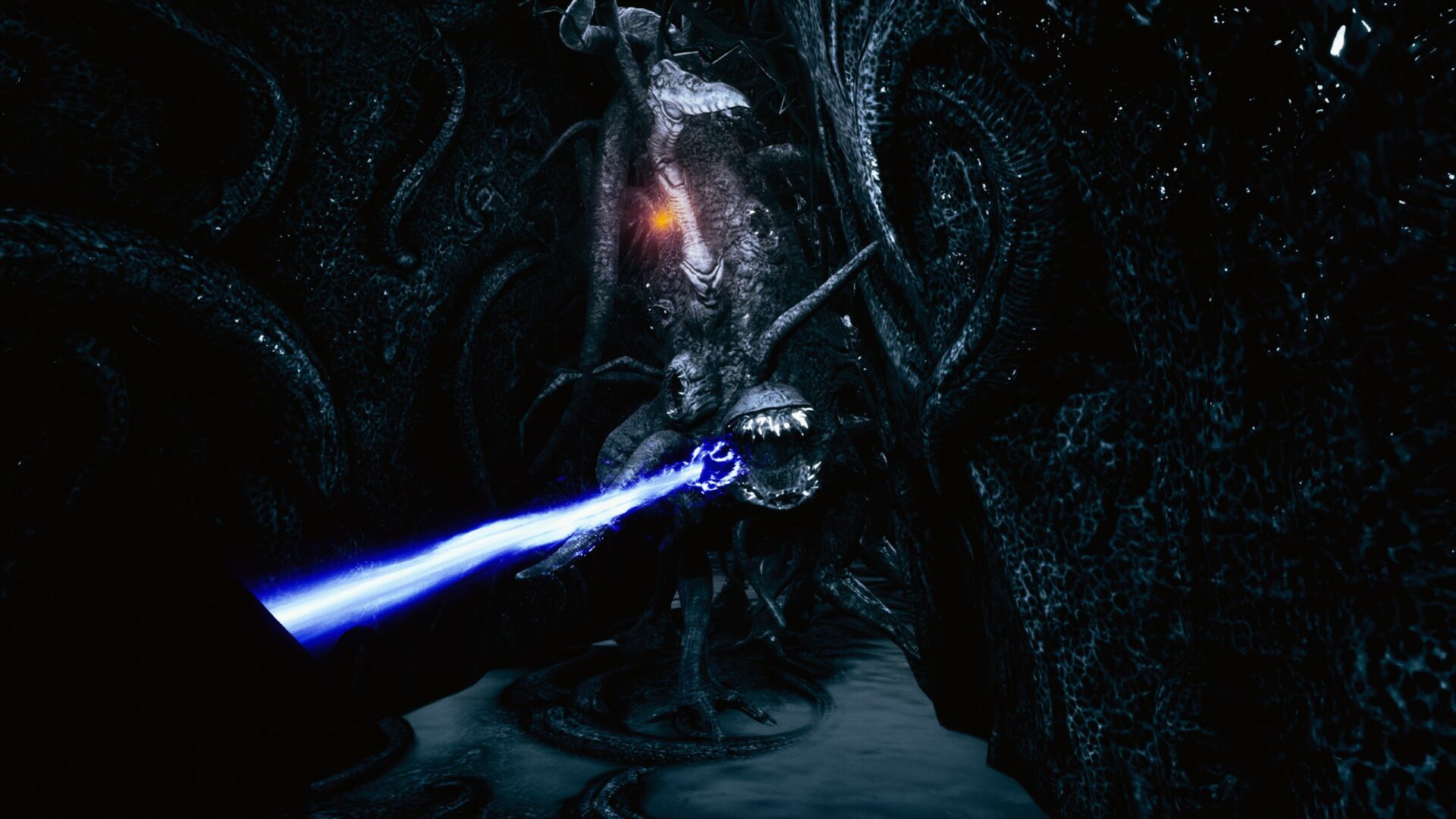 🟨 Bugs & Other Issues
– No option to disable subtitles.
– No global volume slider.
– No “Exclusive Fullscreen” option.

It took me a little less than 3 hours to complete The Shore, taking time to explore each environment accurately (when possible) as well. Despite the good quality, I recommend waiting at least 50% or better sale before buying, as the default price is completely unreasonable.