REVIEW: Half Past Fate: Romantic Distancing

Stuck inside, plans ruined, but at least the internet works.

Back last year, I found and played a game called Half Past Fate which instantly grabbed me with the cute art style and that it’s a rom-com slice-of-life adventure where you follow six people as they cross paths with their destined soulmate and eventually get together as you jump through time and switch between perspectives. You can check out my review here, but I quite enjoyed it and it surpassed what I was expecting from it going in. Fast forward to this year, and we’re now having another chapter added onto the Half Past Fate universe that I doubt many people would have predicted. 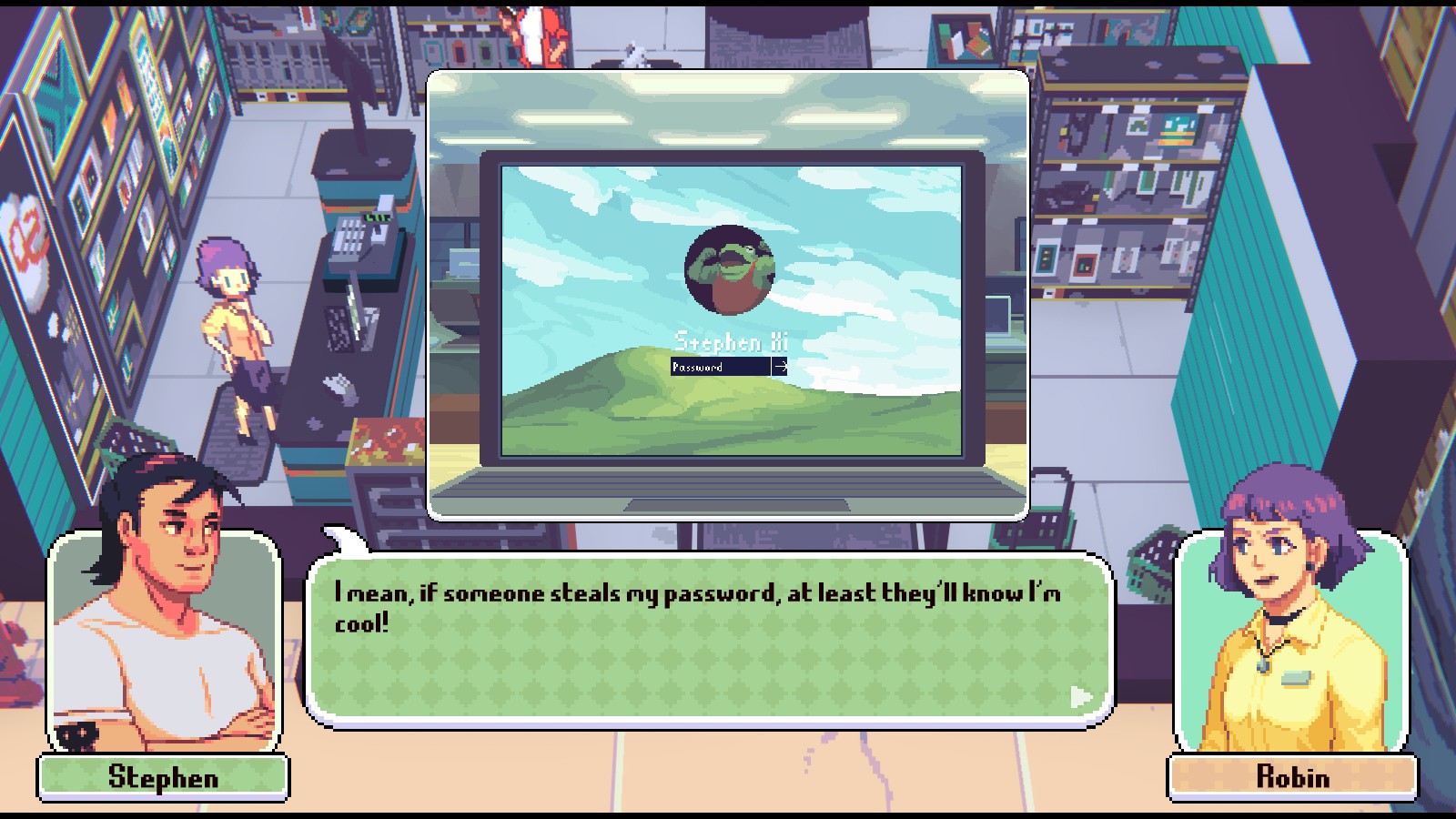 Half Past Fate: Romantic Distancing is basically adding in another couple to the original cast, but this takes place after the events of the original game rather than intertwining this within the original timeline. First of all, the original storylines didn’t have a lockdown going on, this does have a short mention of an event that took place in the original, and there were changes to the town starting. Anyway, this time around we’re only following one couple. If you played Half Past Fate, you may have a faint recognition (or outright remember depending on when you played) of who these two are. 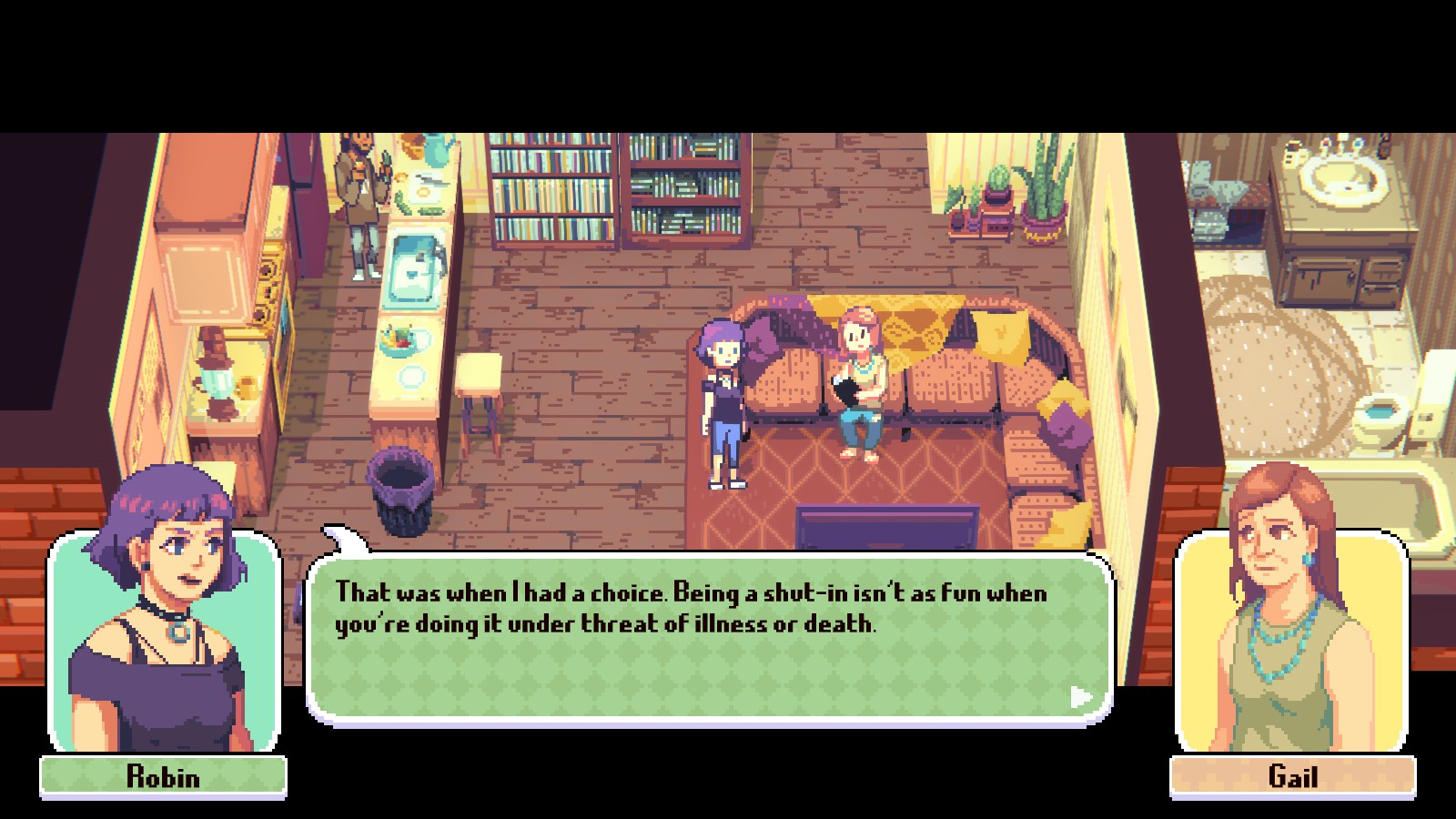 We’ll be following the cashier of ElectriCity, Robin, who was not at all interested in interacting with customers and the Swole Tea guy from the Tea Festival who we learn is Stephan. Their paths have not crossed at all until now, when Stephan needs some help. He doesn’t exactly know anything about computers and his isn’t doing so well, so he ends up going to his local electronics store (which I don’t think he goes in at all). Though, today is his lucky day as the Nerd Force nerd that’s meant to help fix electronics decided to skip out on work. This causes Robin to see if there’s anything she can do, which in turn puts down her barrier, and they hit it off really quickly. To the point where they’re making plans to see a concert. Though, as you guessed correctly based on what this game is about, these plans are dashed as the virus has started spreading and the state this game takes place in is put into lockdown. Luckily, with technology and that they did exchange phone numbers, they can still talk and hang out through their screens. Giving us a look into how cute they are even when they’re apart, only seeing the highlights, as the weeks go on. And on. And on until the end of lockdown and being safe from catching the virus doesn’t seem so in sight anymore.

I’ll stop here, as I don’t want to go into too much considering that this is a short game. Although, I will say that there are two different endings which is only determined by the last choice you’ll have. Depending on your choice, you’ll see how this relationship will end up and if it’ll survive or even continue when everything calms down. 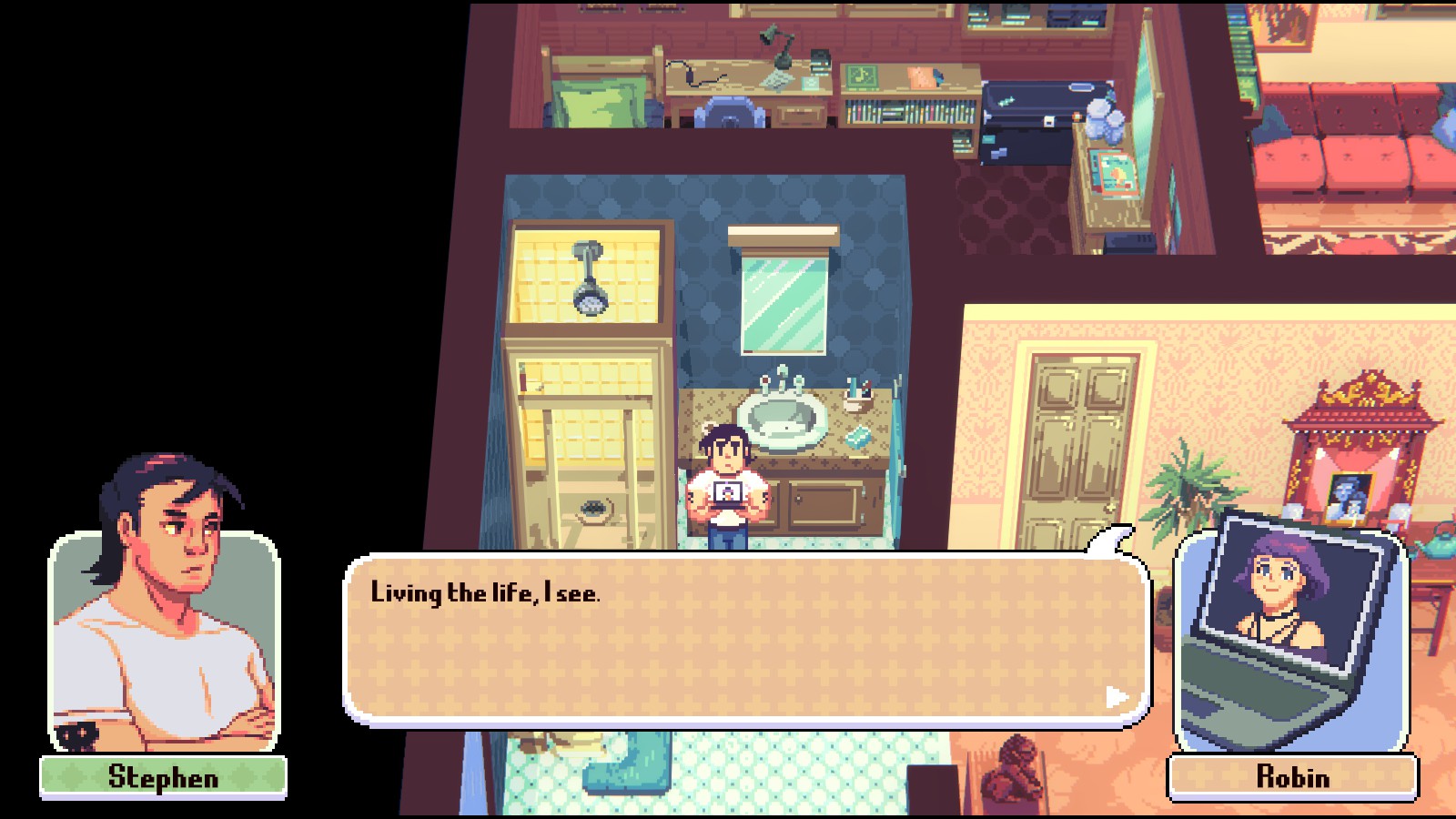 I’m a little bit disappointed in this title to be honest. I did know going in that it’ll most likely be a short little story, but I couldn’t help from desiring a little bit more. I would have loved to see more of Robin and Stephan’s relationship blooming, as it did feel like it was going a little too fast despite how well they hit it off the first day. Or perhaps even revisit the couples from the original game to see how they were doing and how they’d deal with navigating a relationship during the pandemic. However, this doesn’t mean it isn’t as charming. The art style is still cute as ever, we get to see a snapshot on what’s happening in this city after the original game as well as two new houses, get to know new characters both before the pandemic and how they changed due to it, the transition between both Robin and Stephan’s house was nice, and it still has interactions with various people and things you can opt to see (though, of course, not as much).

I may have wanted more out of Half Past Fate: Romantic Distancing, but it still has what made Half Past Fate as great as it was. It’s just that it’s a smaller game that focuses on one couple rather than multiple. It serves a purpose of telling how a rom-com possibly could go if plans were suddenly dashed due to lockdowns and it does it well. I’m also sure many people are going to relate as while there are people okay with seeing friends or loved ones through the screen, there are those that missed out on plans and hanging out in person. I’d recommend picking up Half Past Fate: Romantic Distancing to anyone that loved Half Past Fate and has an hour to spare to complete this short side story nonetheless, but you’re not missing much if you opt not to.

Also, there are a lot of great lines that I’m totally saving and bringing out when I get the chance.