REVIEW: Half Past Fate

“What time is it again?” “Oh you know, half past fate”

Have you ever just wondered if you were fated to be with your significant other or your destined soulmate hasn’t crossed your path? Waiting for that one day where you run into someone or randomly make eye contact and it all goes uphill from there? Or perhaps you just love romantic comedies and wish your life was more like one. Well, in Half Past Fate, it might as well be reality for the small town this game takes place in.

In Half Past Fate, you follow three soon to be couples from different points of time throughout the game’s 12 chapters. You first join Rinden 12 hours in the past as he decides to get some tea as he waits for his business meeting to start. It so happens that he likes the barista working at his local cafe, though she doesn’t even know him, and he even has a blind date set up. However, right when he’s walking out a woman runs right into him, spilling his tea all over his suit. You soon find out this woman is Mara, a woman who is focused on making her invention a reality, but she needs to convince an investor to keep her startup company afloat. Of course, Rinden is the one she needs to convince. Next, you join Ana about a week in the past as she runs into Jaren at a Tea Festival. After finding out that Jaren, a guy that works at a retro game store, is new to the tea world, she takes him through each booth and decides to give him her number. However, Jaren smudged it and he sets off to track her down. Lastly, we go back a whopping eight years with Bia as she befriends Milo while she does her photography project. This soon blossoms to a crush from both sides, but both of them were never single at the same time. 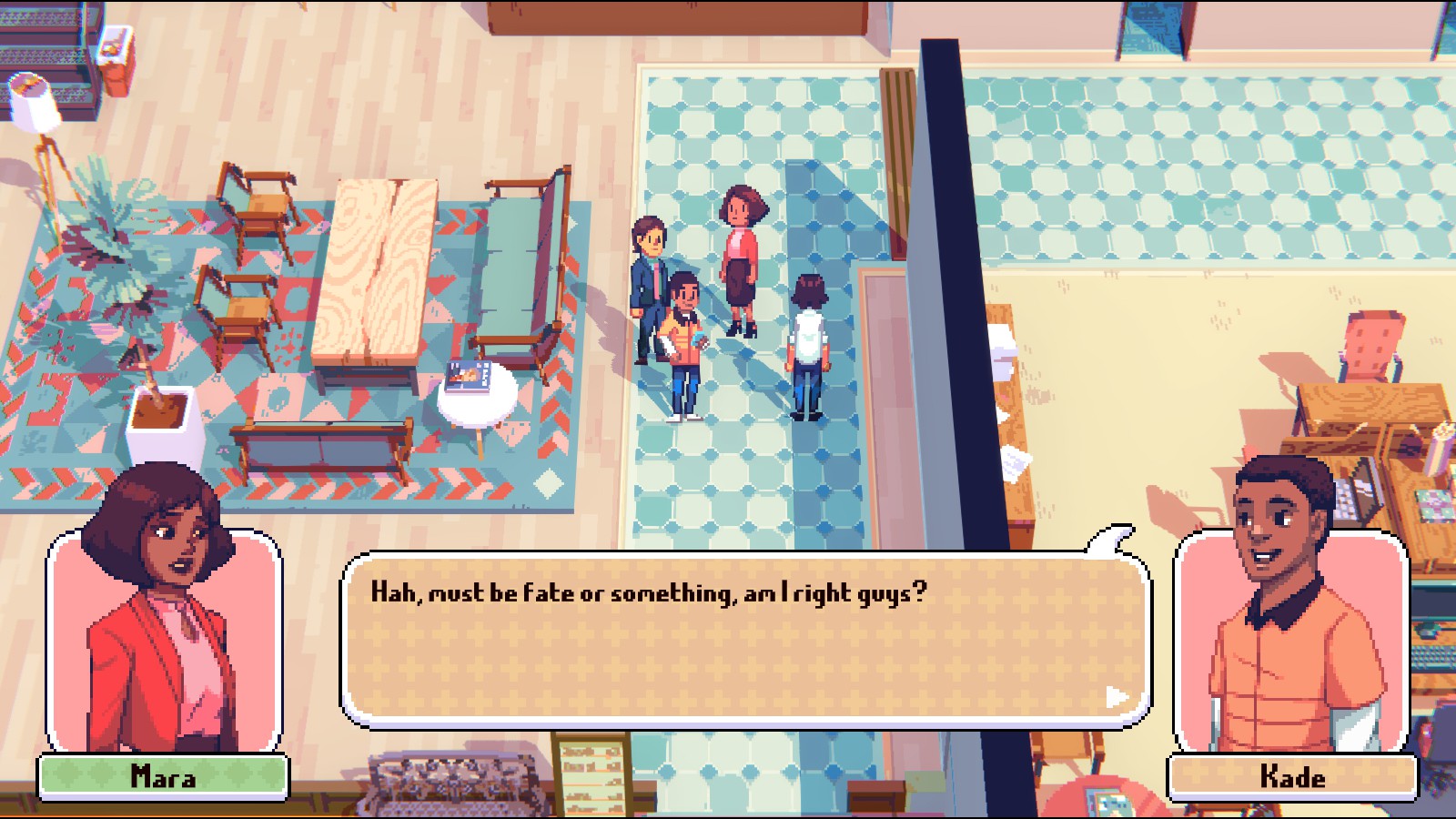 I’m sure that someone out there is worried over the story structure and trust me, I did too. Good thing is, the order works out. While everyone’s storyline happens at different times, they all start from when they first meet which is way better than choosing a seemingly random point. Then it goes from there as you come back at important milestones until you end at the present, which is the point where all of them are finally together. Not to mention that each chapter references another. It certainly helps that this takes place in the same town as you see the same characters popping up in other chapters and call backs. I certainly didn’t expect to meet the person that made a food documentary. You even get small cliffhangers in a couple that get resolved later on. That blind date Rinden mentions? You get to see how well it went. 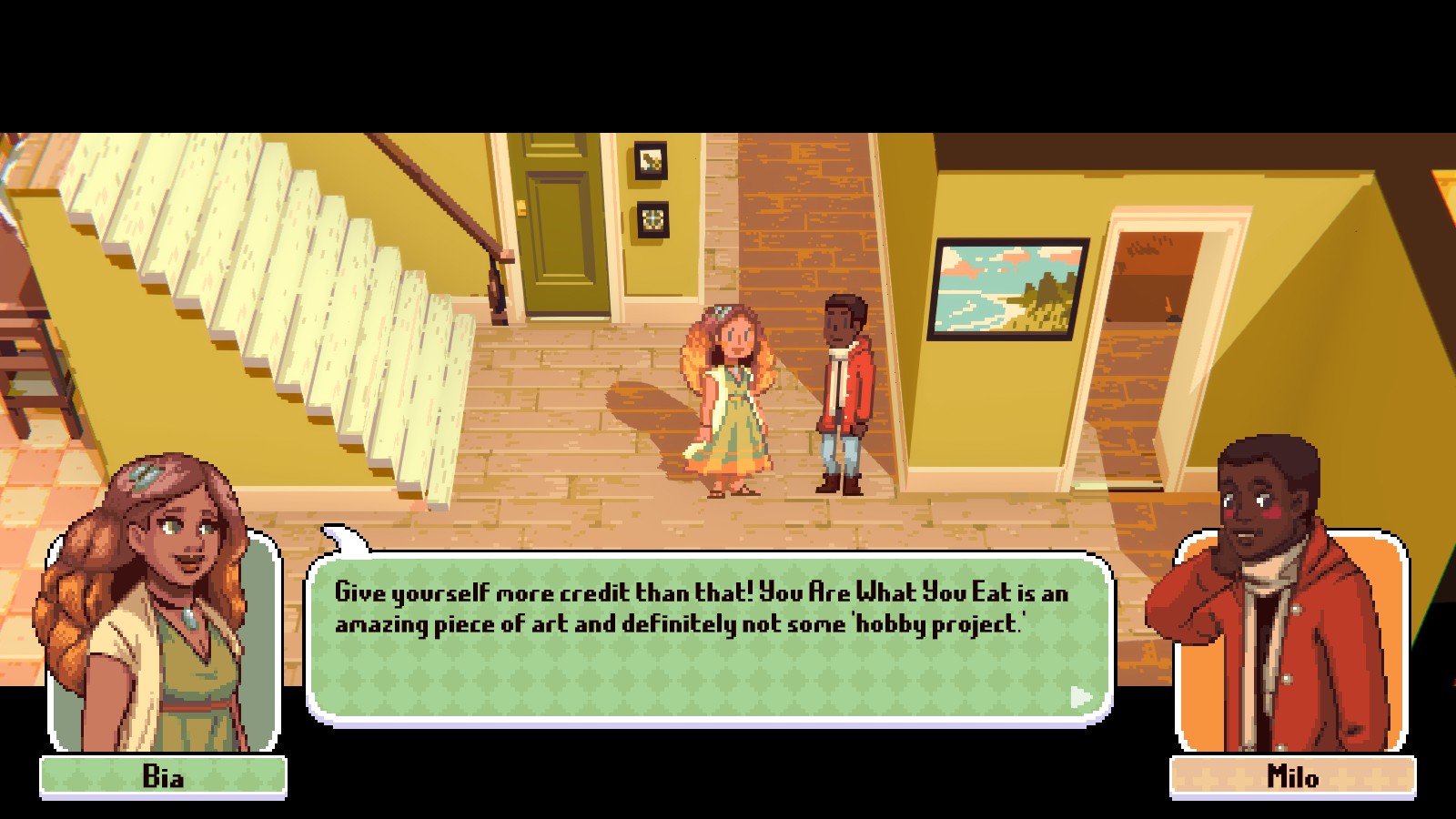 Half Past Fate is pretty easy to pick up. Each chapter more or less puts you in a new area for you to explore, talk to everyone you can, and examine everything to see what the character thinks. To progress through the story, you’ll basically be doing quick fetch quests as you locate an item another character needs to get information or another item so you can eventually get what you need. There are certain points where you need to figure out what to do, but it’s pretty easy to figure out what. Personally, this didn’t really bother me for the most part as I was more focused on finding out what happened next, talking to other characters, noticing all the references from other chapters, and exploring each area as I stared at the beautiful artwork. There was only one chapter where it didn’t fit in as well as the other chapters. 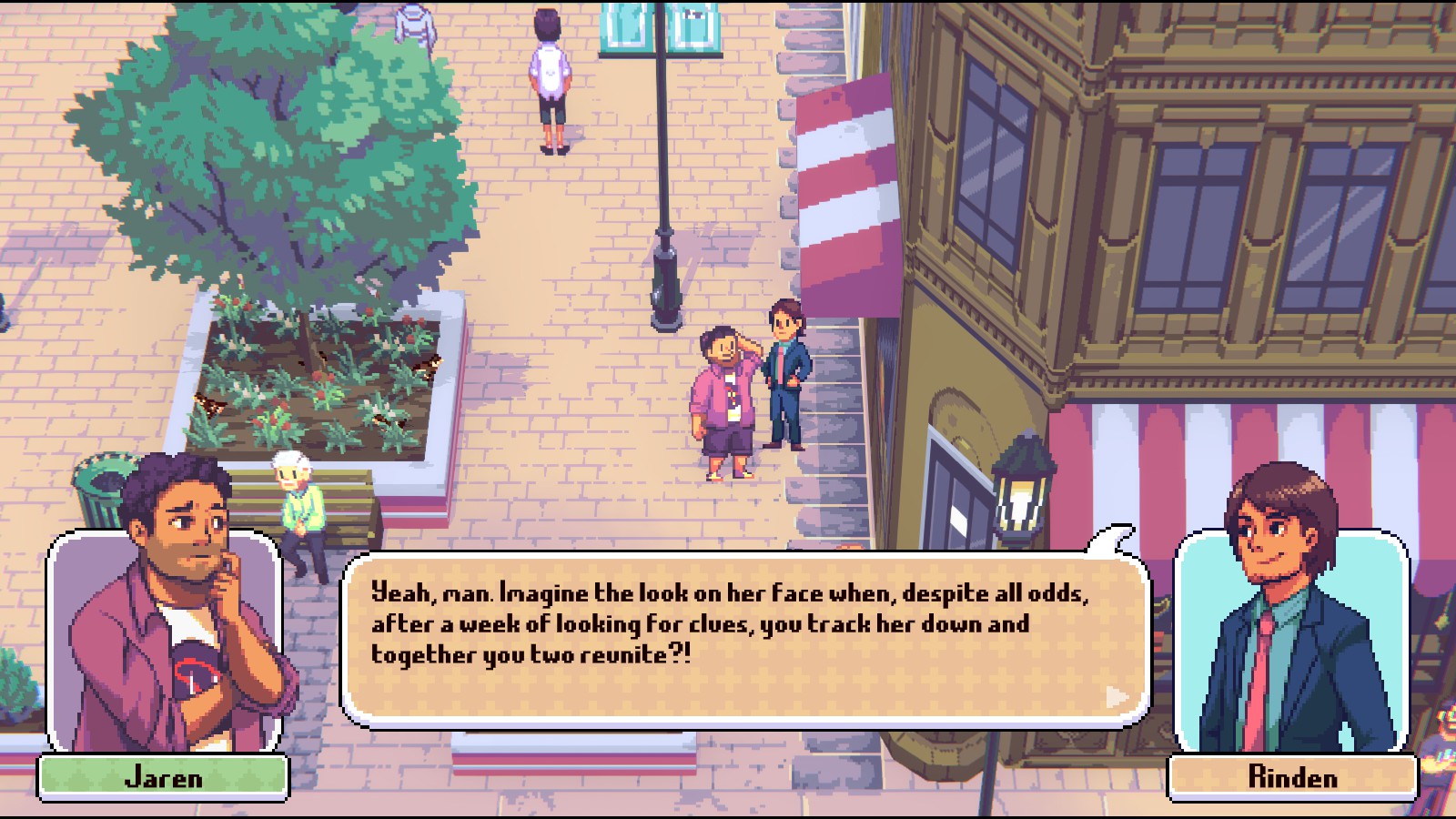 Of course, the way the stories are told brings out negatives. Considering that we have three relationships fighting for space, I couldn’t help but think that one of them didn’t get much focus as the others. Each couple does have four chapters each, but it’s what is told within the chapter that makes it feel this way. Bia/Milo and Jaren/Ana chapters were more about they’re dynamic with each other and why you should root for them to eventually get together; while Rinden/Mara chapters are more focused on how they’re both focused on their business. I didn’t get any vibes that Rinden and Mara liked each other, more like Mara was only interested in Rinden giving her the investment she needs, despite both saying they find the other one cute. Sorry Rinden and Mara, I don’t think you guys would have normally stayed together. 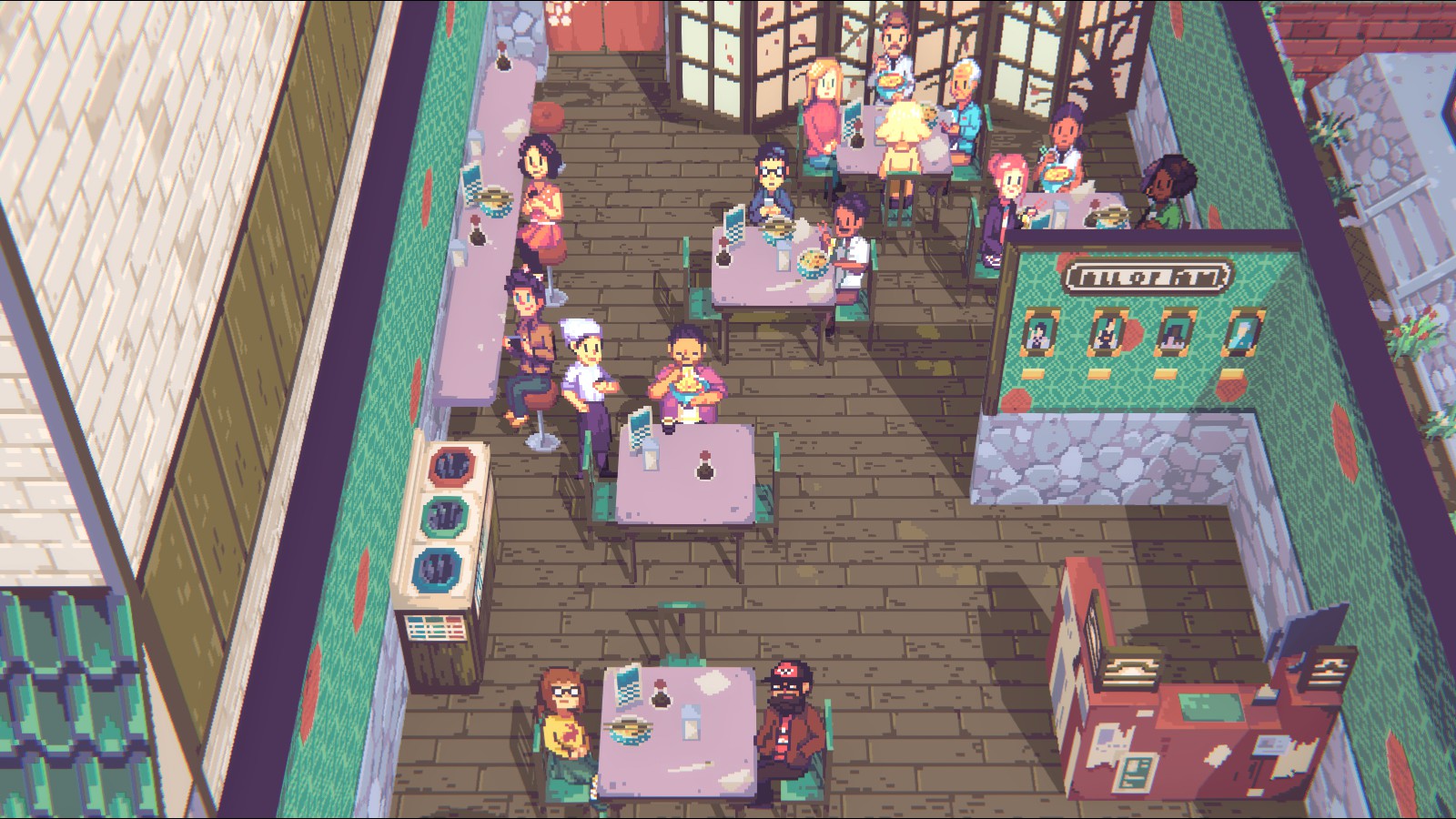 There are a decent amount of optional stuff you can do. Some of it are easy to run into them naturally, but the ones you can easily skip over can be seen through achievements. I don’t talk much about achievements, but Half Past Fate uses them well as you can use them to see what optional stuff you may have missed in a chapter. There are a couple multi-chapter achievements like finding all B.B. Bunnies, talking to a certain character, or finding the talking plant (yes I’m being serious). The chapter-based ones are more things that you probably missed or didn’t know you could do. Like the coffee creamer has one more interaction in Chapter 1 and you can actually figure out the problem with the printer in Chapter 5. 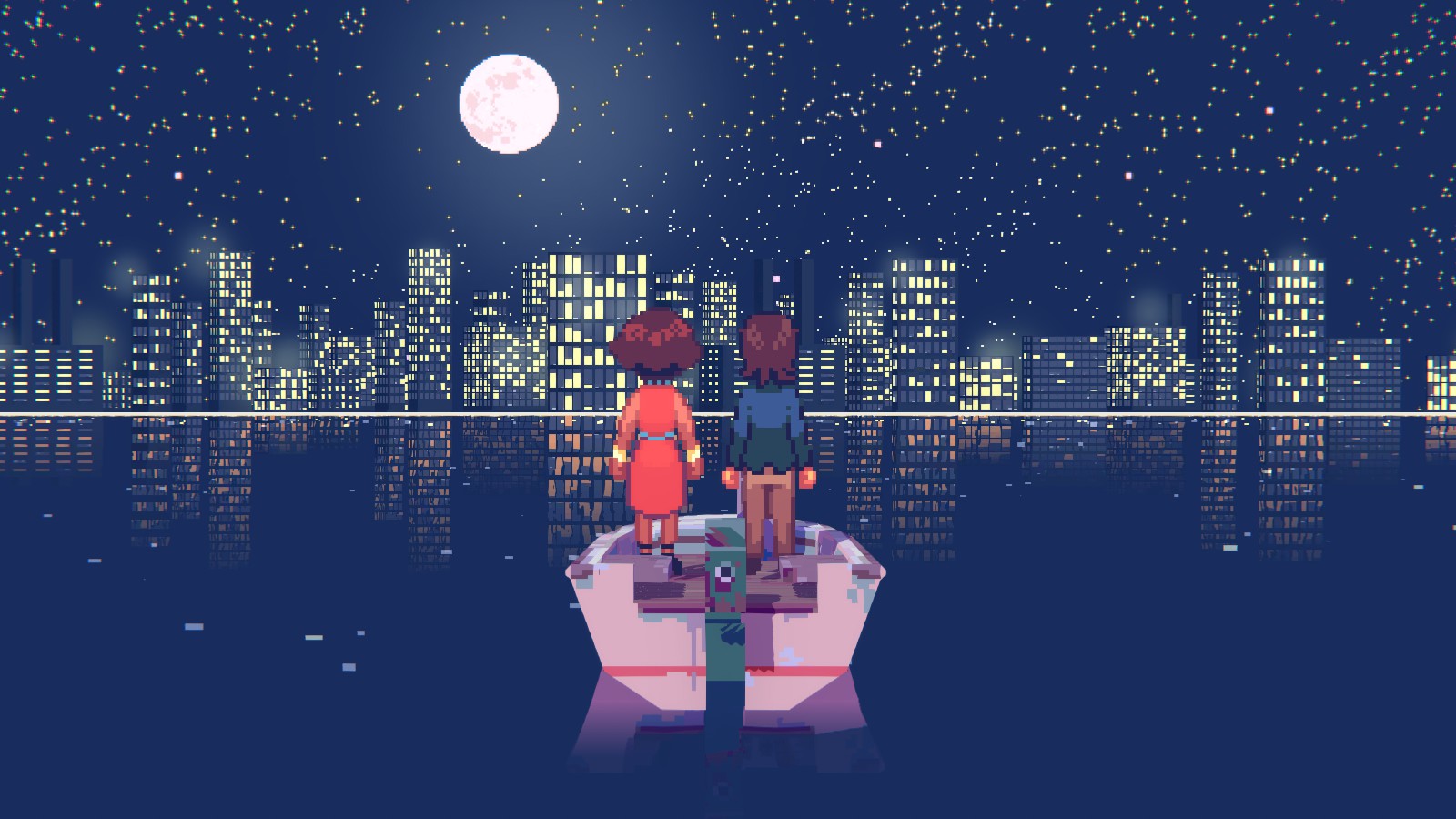 To be honest, the only thing I expected from Half Past Fate was a cute game where you follow a few couples that are living out a rom-com scenario. It certainly delivered with it’s cute art style, upbeat music that never got old despite playing constantly, and a story where I could barely tear myself away long enough to eat before I went back to continue the story. While I do recommend Half Past Fate, I don’t to those who are expecting a dating sim or expecting a challenging puzzler as this is just a cute, relaxing, game that focuses on the journey the characters go on.

If you’re interested in playing Half Past Fate you may be in luck! Ask JimDeadlock on our Discord server and he may have a free key for you, if you’re quick!