Creeper World 4 is a new iteration in the Creeper World series, which combines casual real time strategy with fluid dynamics. Although the jump to 3D doesn’t seem to add much tactical depth (pun unintended), it’s a no-brainer for fans of the series and newcomers alike!

Creeper World 4 is the fourth in a series of flash games in the Creeper World universe. These are a mix of real-time strategy and tower defense, where the enemy is a blue goo called creeper. The creeper behaves like any fluid, slowly creeping through the map, gobbling everything up.

While the games are fairly casual, and unlikely to appeal to the hardcore strategy gamer (I say this with some qualifications, which I’ll write about later), it is a very original game (well, the series, anyway) that works very well.

Creeper World 4 is the first to make the jump to 3D and it honestly works greatly and is a pleasure to see in actions with the waves of creeper coming in and out. 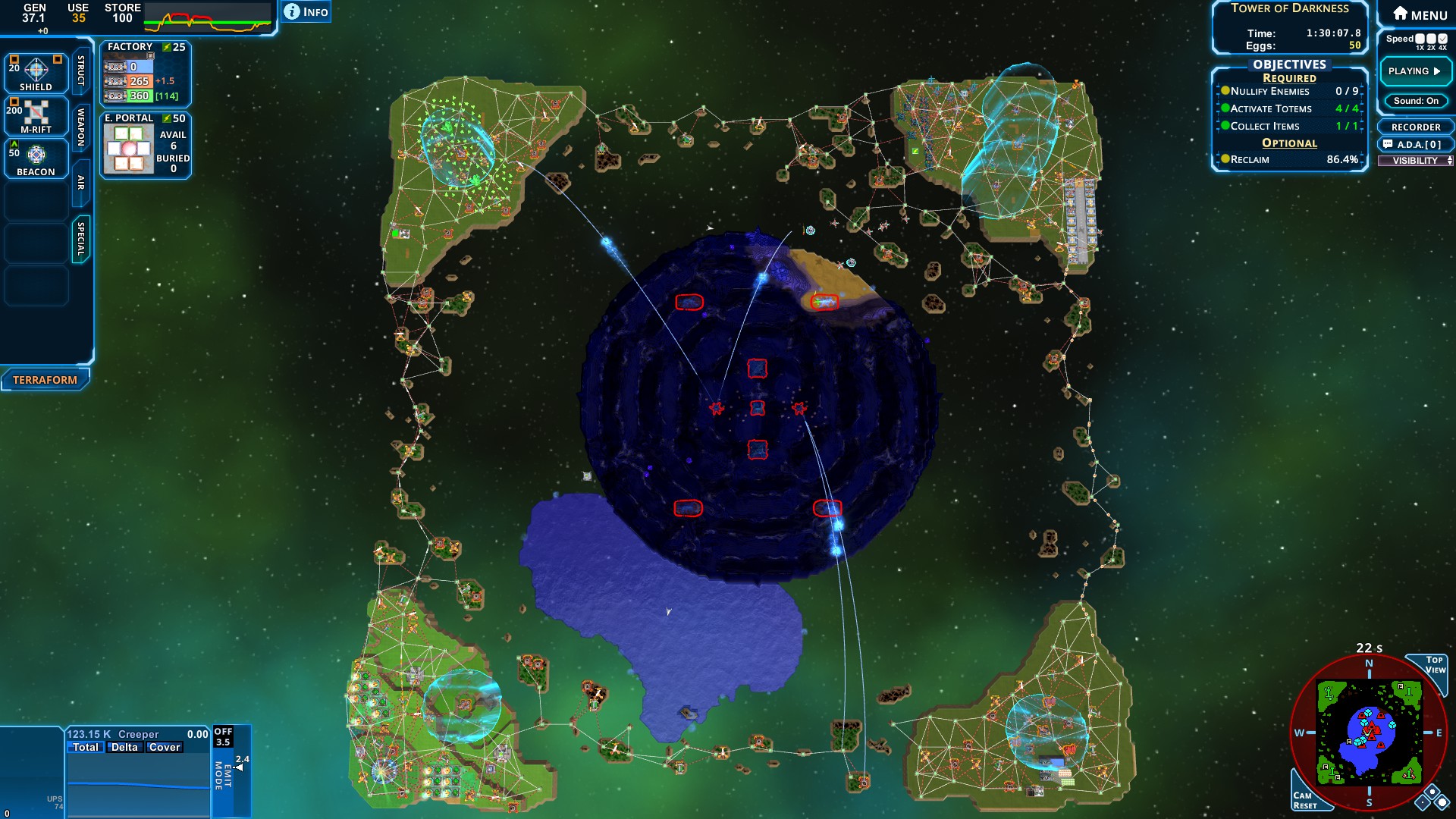 The game obviously lacks all the polish, bells and whistles of modern games, but it otherwise looks quite okay. While not beautiful, there is nothing that sticks out as too out of place (or style). It also does a good job of conveying the gameplay-crucial information, with a wide array of further filter options to make certain resources or enemies more distinctive.

While I’ve read some reviewers disparaging the UI as something clunky and out of the 90s, I have to disagree – while the hotkeys may be a little weird, they are rebindable, and I never felt like I was fighting against the menus. My gameplay experience has been fairly smooth, and UI is something with which I often have problems in strategy games!

The only complaint I have is that the “documentation” (read wiki) isn’t the best – there are still some units and mechanics I don’t fully understand because of the unhelpful “detailed” descriptions. That said, I expect it to be ironed out in the future, and it doesn’t impact gameplay too much. 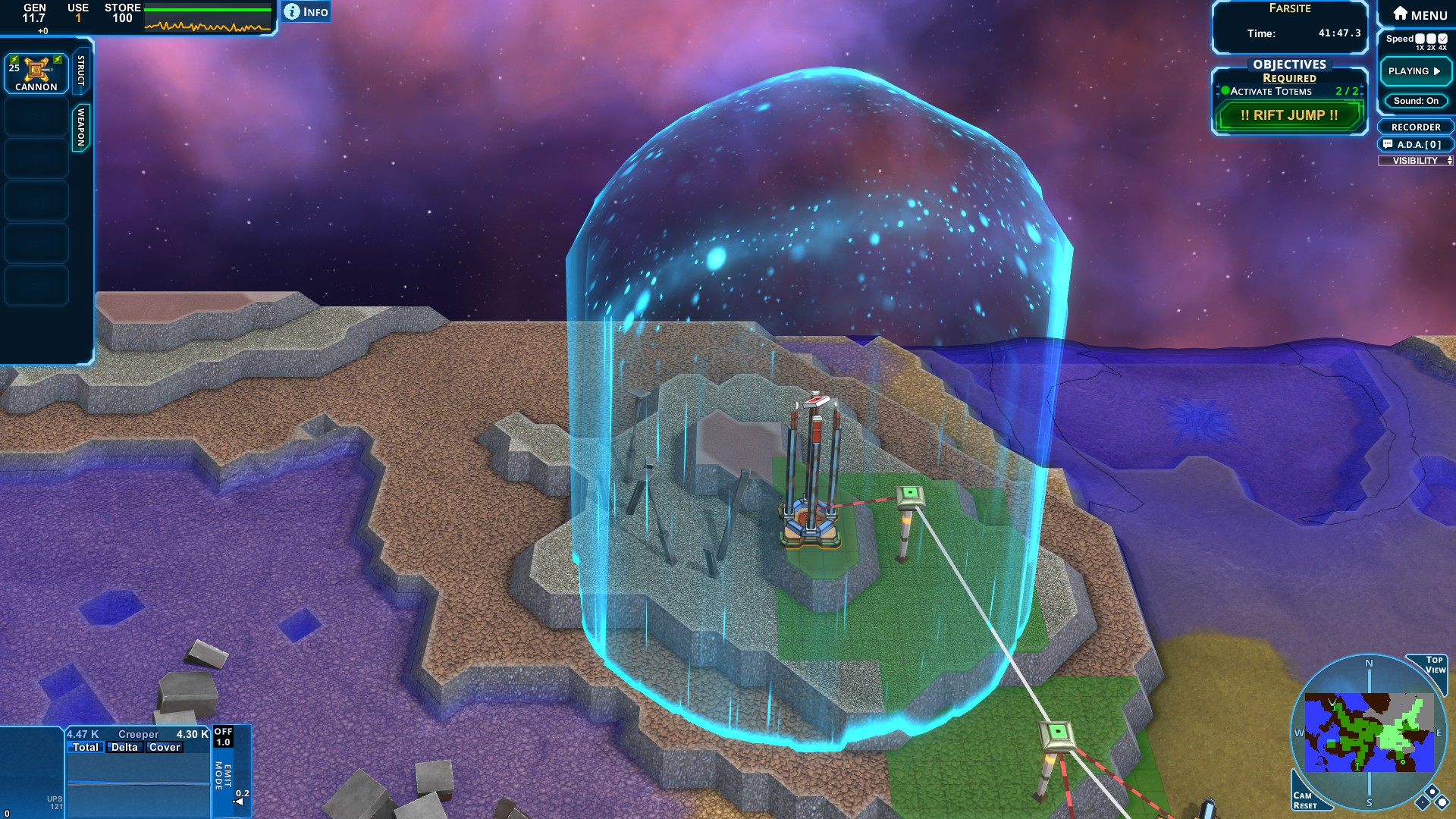 As I said, the game plays as a mix of RTS and TD.
You start with an “empty” map, with resources and enemies placed. You choose where to place your base (although, really, there is usually a single viable spot) and then start building your towers and the game progresses from there.

The game is largely a war of attrition. You set up your towers to gather and deliver power to your other units, and must be careful to avoid the creep, which destroys everything you try to build.
The basic enemy is an emitter, which creates creep in a fixed timer and amount, although there are other enemies which can send little bugs to attack specific buildings or spore missiles that create creep where they hit.

Although there are some different resources, different units and different enemies, the levels play more or less the same, on a high level. You want to set up your power grid and add enough offensive units to keep the creep “at bay”, without overwhelming your base. Once that’s done, once you have a stable setup, you will try to expand your frontiers, building more towers and slowly advancing your offensive units.
This is why the game is a “casual” strategy game. There aren’t many different problems to react to, during a level; once you have established your base without being obliterated, victory is just about guaranteed – the question is how long it takes.

While the game isn’t too wide in the number of its units and mechanics, it is wide enough for learning to be enjoyed and levels to have some variety. The most important units were the basic cannon and mortars, as well as missile launchers and sniper rifles. The former two are the basic offensive weapons, to keep creep at bay, while the latter two are defensive weapons, to destroy the bugs and spores before they can do any damage.
There are also three different resources to support different kinds of units – blue will support anti-creeper, which is your own fluid to neutralize creeper (thus acting as a buffer in your base, for example); red will support missiles, snipers and other advances weapons like bombers; green will support shields, platforms and so on.

The coolest aspect of this specific game is probably the terraforming! Some weapons get a height advantage, and you can redirect the creep, somewhat, by building embankments and so on. This is something that you couldn’t really to in a top-down game, at least to the same extent that you can here.

Moving on the structure. 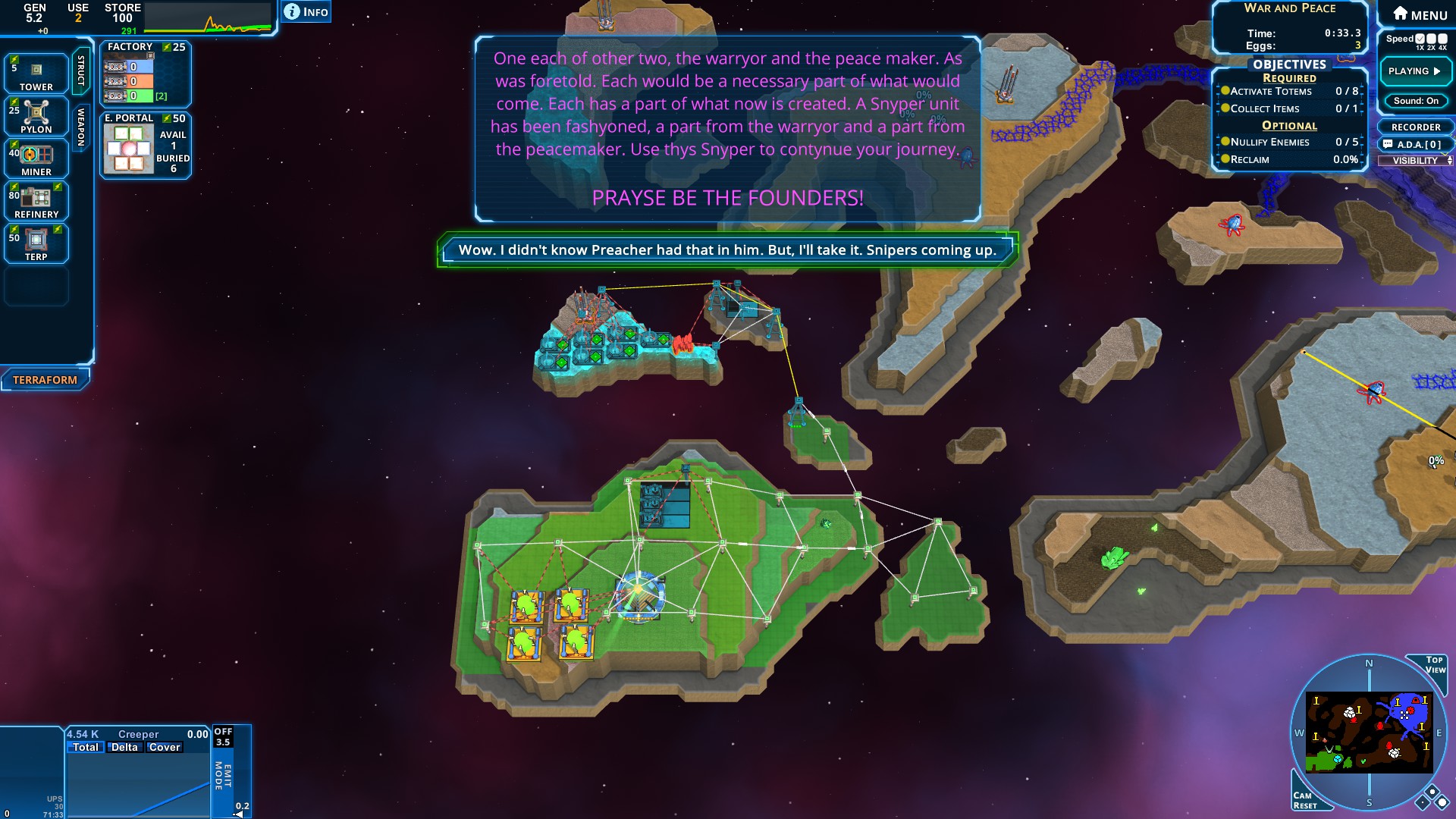 The main campaign is a collection of 20 maps. Each will likely introduce a new unit, or a new artifact on the map you can use, so these missions are, to an extent, a tutorial. Most of them are fine, some harder, some longer, but they are fairly good. Unfortunately, they don’t all do a very good job at introducing the unit of mechanic they are showcasing. Very early on, the mortars seemed completely useless on the level they were introduced; I beat the mission without any trouble and barely using them. A couple of missions later, the level seemed absolutely impossible to beat, because it relied on the mortars – a unit I wasn’t using because it didn’t seem at all useful.
This problem is even worse in some later levels, although the later units are less important overall. Long story short, many missions that are introducing a unit fail to force you to use them effectively, fail to actually teach you their purpose, and this can come to bite you later on.

Teaching aside, I enjoyed the campaign. It did a good job in providing a varied experience, as some units changed the game quite a lot. I do think there are some units that don’t serve much of a purpose, but they don’t bloat the game to a significant extent.

Most campaign missions are about getting to a certain artifact in the level, destroying a percentage of the creep, or neutralizing a specific enemy. Then, you also have secondary objectives that are more “exhaustive” – eliminate all the creep, activate all the shields, neutralize all the enemies, and so on.
All of these different aspects have a leaderboard entry (for time, mostly). These aren’t very interesting, most of the time, as will become apparent in the next section about pacing; but they can prevent rushing the objective and allow for a more complete “solution” to the level (as in knowing to how defeat the creep and not just take the flag and running).

The campaign took more around 15 hours, will all the objectives complete, though it can be considerably shorter if you know what you’re doing. It can also be considerably longer if you compete in the leaderboards! Overall, it seems the right length for the campaign; later on, I’ll write a bit more about the scope of the content.
First, though, let’s discuss pacing and difficulty. 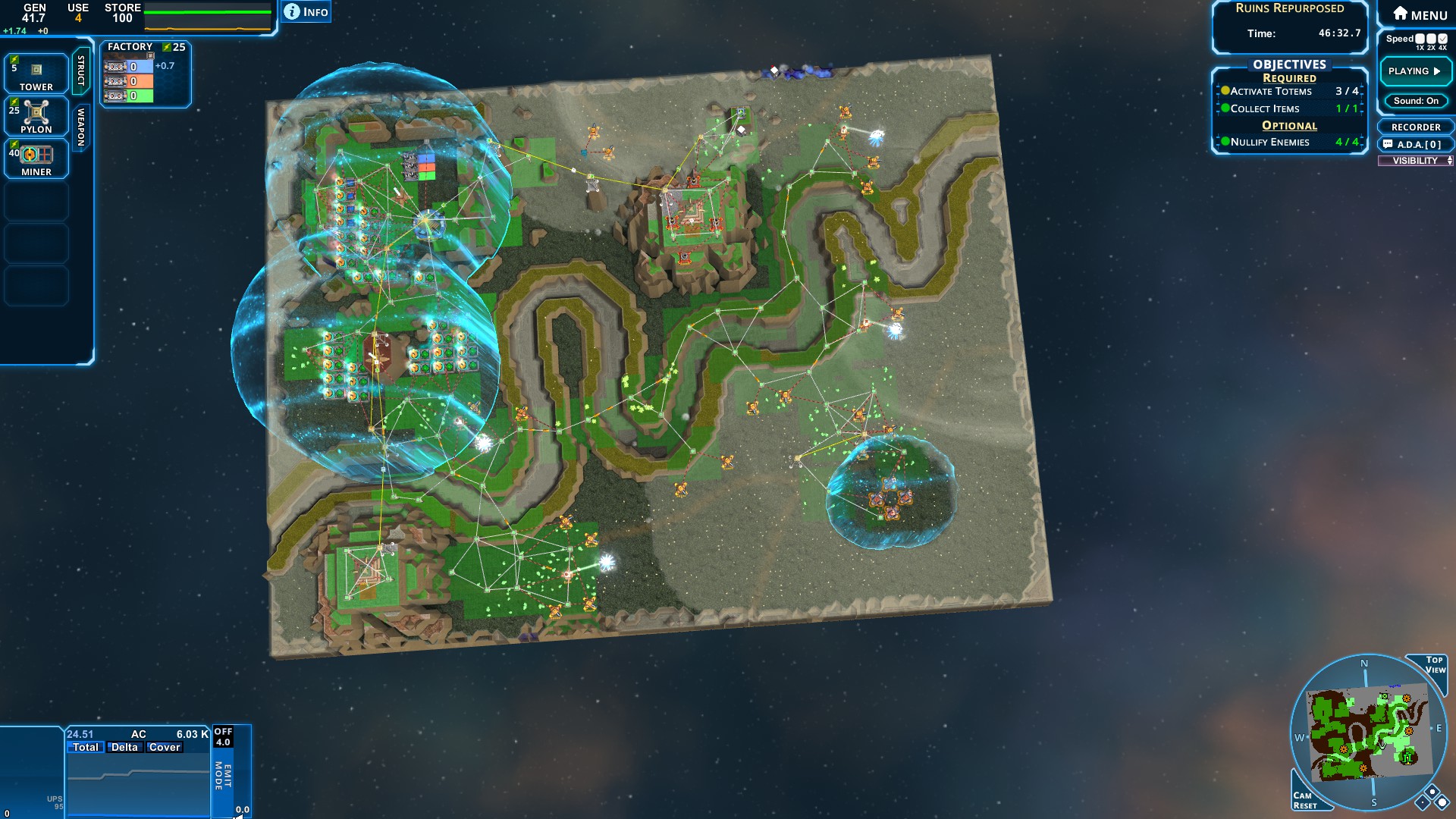 The game’s pacing is the biggest fundamental problem I have with it.

As I said, Creeper World is a “casual” strategy game. It isn’t “very” difficult, although it *can* be, and surely some future levels will be (more on that on the next section). But, at heart, it is fairly easy and straightforward.

The problem is that the difficulty is all up front, about the order and placement of your initial units. If you screw up the very beginning of the game, you will be overwhelmed by the creep and the deluge will force you to restart; if you don’t, then you’ll reach a stable equilibrium where, at the very least, the creep can’t destroy your building (but you will most likely have some room to add an additional cannon and thus gain just enough ground to set the ball rolling).
After this, it is just a question of time – you may have to choose which areas of the map to tackle first, and which units to deploy to do so, but it’s not a hard problem. You just throw more and more firepower on the creeper until you decimate it all.

This can make some levels a bit “tedious”, especially if you go for the secondary objectives. Since you’re in a stable state, it becomes merely a question of time to complete the level. A war of attrition. This is not ideal.
One can make the argument that, really, the game is about optimization – about beating the level as fast as possible, about figuring out how to beat the level without the whole attrition. While I agree with it in theory, I don’t think the game design reflects that.
The levels are never built in a way to rush you, and the leaderboards aren’t even sorted by time to make the leaderboard climb all that salient. The optional objectives, likewise, are not about time at all. In short, the game never actually encourages you to optimize time, and that’s where the problem lies, to me.

The mechanics are solid and original, but it has very awkward pacing (where the difficulty starts highest and decreases sharply) and the game’s design in terms of structure doesn’t address this at all. 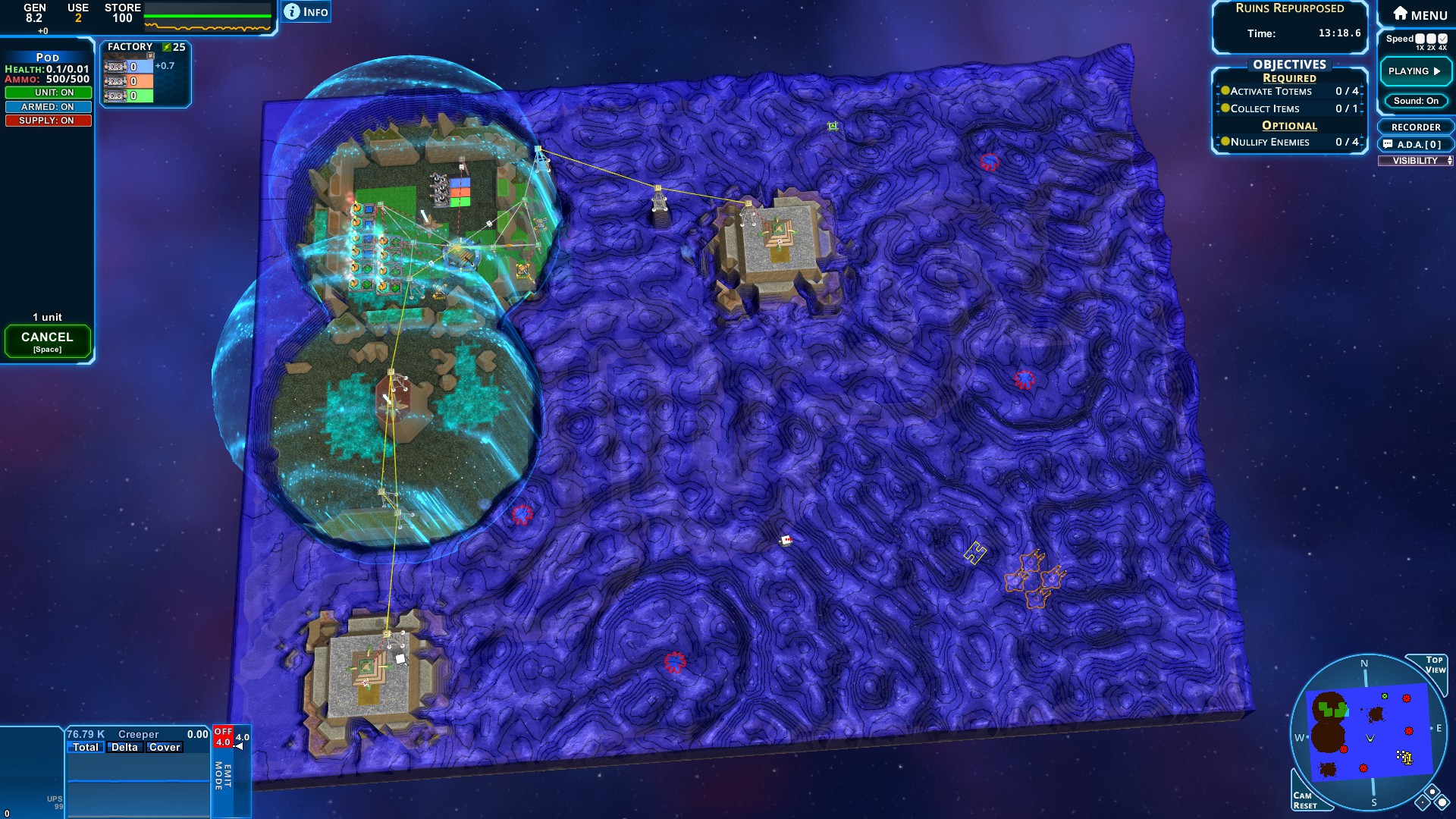 While a 15 hour campaign may seem short for a strategy game, don’t be fooled by this – like previous entries in the series, the game comes already equipped with daily missions, extra (20+) “experimental” missions (some quirky, some from previous games, generally less tested than the campaign), a procedural mission generator as well as a level editor.
So, if you enjoy the game, you can expect dozens or hundreds of levels in the near future.

If this follows the pattern of the series’ previous game (and there is no reason for it not to, since it isn’t worse enough or different enough), you can rest assured that the game won’t lack abundant content. 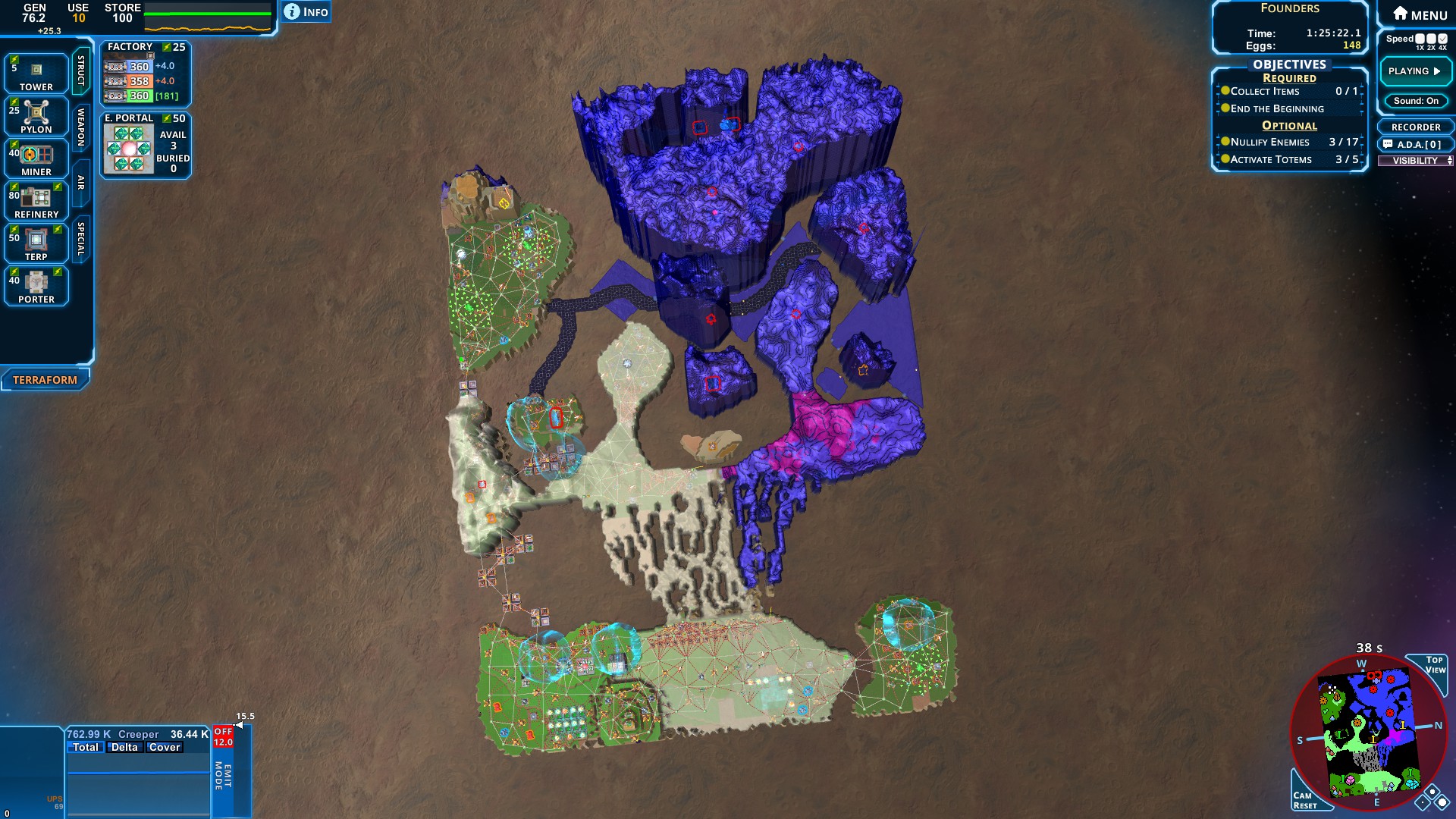 To close this review, I can say that Creeper World 4 is a very easy recommendation, for me. For newcomers to the series, I find the idea of fighting against a fluid to be very original and satisfying to see, so it’s a no-brainer recommendation if only for the novelty of it. It is also not a case of “good idea terrible execution” – the game is solid (heh)!
For fans of the series, you probably don’t need my recommendation at all, but you know what you’re gonna get.

The only “problem” is that I doubt it will change the mind of whoever wasn’t moved by the original game.

While I am not one to play around for too long with custom levels or leaderboard climbing, I really enjoyed the game for what is is – having played Creeper World 3 a few years ago.
Sure, the strategy isn’t too deep and the levels can be a bit tedious due to their awkward pacing – which is why I don’t give it an Autosave – but I still think it is very much worth playing for newcomers!