A slightly broken tactical action game with a dose of light RPG mechanics and a sprinkling of management and survival, newly expanded with drunken zombie mayhem.

Dirty Dozen, or better yet, Kelly’s Heroes vibes bring a lot of ambience and character to this alternate World War II history set-up following a small squad of eight British soldiers stuck behind enemy lines following a plane crash over neutral territory. It’s up to you to lead them through trials and tribulations of an unknown country, weird locals, interpersonal relationships, ramifications of your actions, mysterious lack of cover in heavily wooded and rocky terrains and occasional fails of the 8 second WeGo combat mechanic.

The game crash lands you in a WWII setting of an unknown Eastern European country and quickly throws this game’s antagonist your way. An army of red helmeted, gas masked crackpots utilizing Wehrmacht’s arsenal of toys to dampen your jovial British spirit. During the three tutorial missions, which do go a bit slow, but are an excellent tutorial, you quickly realize that not everything is right and some sci-fi tremblings start shaking the ground. My mind immediately went to Silent Storm, a remarkable strategy game by Nival Interactive from the early 00’s.

When you unite your entire squad, the between mission breathers at camping sites start warming and freezing your soldiers and your heart. You can trade your collected salvage with an eccentric local named Izkor, who apparently smuggles weapons, food and other assorted supplies in such quantities that you have to wonder why a revolution wasn’t funded. A campfire is also where your squad will form connections, break bonds, gain and lose composure and contemplate the horrors of war. All that is presented in a kind of a visual novel style or a text adventure, with speech bubbles appearing over your soldiers when they have something to say or when a conversation will play out. You do get to make decisions during those conversations with varying results that can influence likes/dislikes, composure and even gain you new traits and abilities. The choice may ultimately be slightly shallow for the overarching story, character development and a leaking bucket of your emotions that the game wants you to invest, but it does give some needed, albeit awkward, characterization of your Tommies. 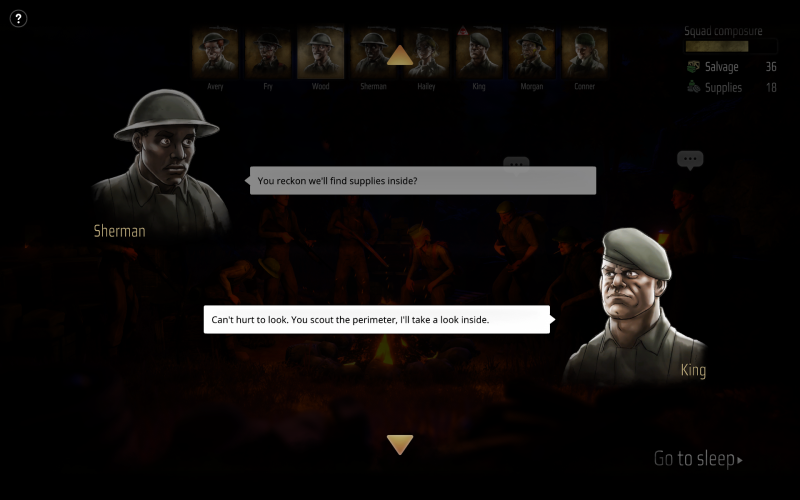 Each soldier has native traits inherent only to them and through playing you can acquire general abilities that can be assigned to any soldier, but are permanent when you do so. Not all of the traits are positive and as the struggles of war take their toll, your soldier’s minds don’t always handle them well. If they lose their composure completely, they are even liable to have some serious errors in judgement and may start seeing themselves as bullet or grenade proof and develop mindless scientific curiosity to test that in the dead of night.

You’ll have the Allies’ ordnance, British, American and even Russian, at your disposal for equipping your soldiers, and several different utilities such as grenades, heavy weapons, bandages and drugs. Each soldier can carry one weapon and two different utilities. Weapons can’t be upgraded directly, but all have different stats and you’ll find different models for purchase. All of these should help you with the game’s hectic and fluid 8 second, phase based small skirmish combat. In theory at least. 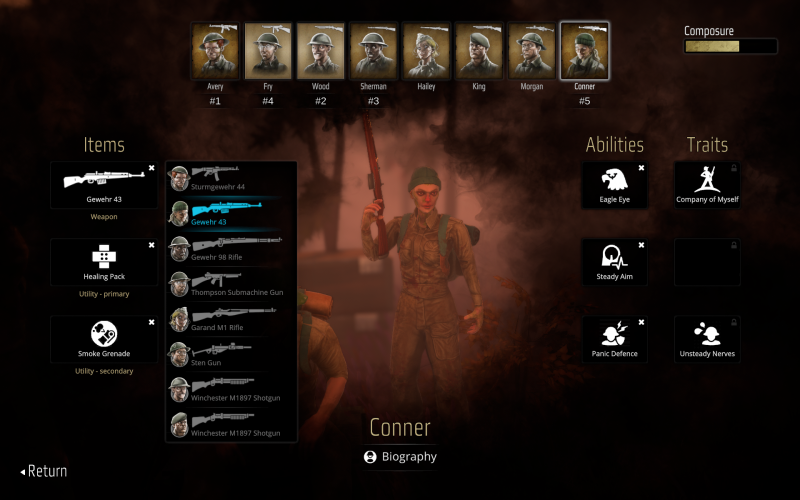 The combat works. It tries to be realistic, it’s not always fun and can lead to annoyances because of lack of fine control and some pathing issues, but it manages to simulate the chaos of war up to a point. Successfully syncing up your squad and their abilities, they auto target and fire when the enemies are within range, so their actions overlap without planting a bullet in the back of your squadmates’ skull and taking down an enemy squad does bring satisfaction and the emergent gameplay moments. But as enemies also move and the 8 second phases are not interruptible, this kind of creates a lot of downtime, mistimed and failed uses of abilities and ineffective commands. 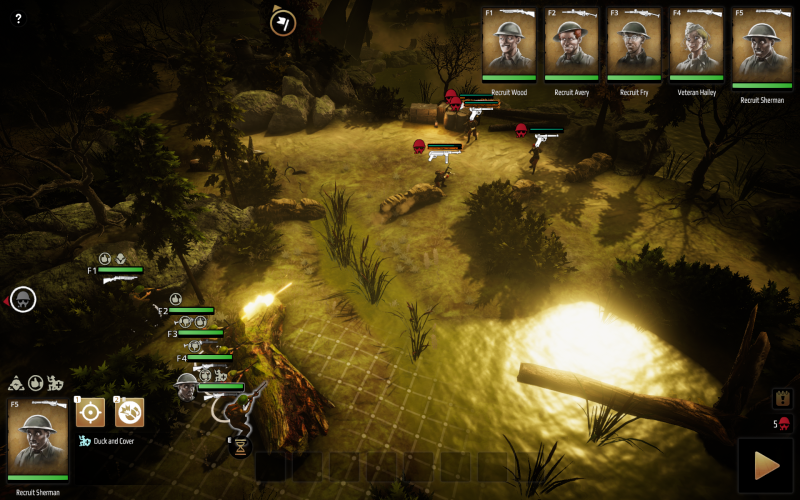 It gets slightly ridiculous sometimes, especially when your flunked order brings more enemies into contact which does seem to happen rather often and you lose control of one of your soldiers when the stress gets too much. Cue the chaos. There’s also a puzzling lack of cover mechanics overall. In fields and forests full of rocks and trees, you’re oftentimes forced to duke it out with the enemy standing in knee high bushes because there aren’t handy boxes or a friendly tree stump nearby your squad has taken a liking to. Smaller cover is destructible, walls and scenery are not. Another mind trip to Silent Storm where the environments were completely destructible allowing for some funky physics and truly spectacular entrances.

There are three difficulty modes and a generous custom mode available and the game does become a very strategic fiddling and micromanagement at the highest level. As much as the game allows it. You may find yourself becoming best drinking buds with a Retry and Reload Checkpoint buttons. That, combined with different mission choices, in-game decisions, multiple endings and a shorter, about 10 hours, romp through the campaign does bring some replayability to the war table.

The Dead and the Drunk

The game received a new campaign, The Dead and the Drunk, and the title pretty much says it all. It turns a game trying to be serious about “war is never really won by anyone” into a clichéd zombie romp caused by a misfired Slavic ritual to Babo Yutro and converting your soldiers into drunken, bloodthirsty monsters with a desire for violence. A giant booze keg is the life of the party here and if your soldiers get sober or lose bloodlust by slaking it on the blood of their enemies, they’ll wander off and desert in a sobriety induced stupor. Considering that the main campaign’s “war is chaos and personal hell” message sometimes falls flat with a silly story and poor soldier characterization, this might not be such a surprise addition. 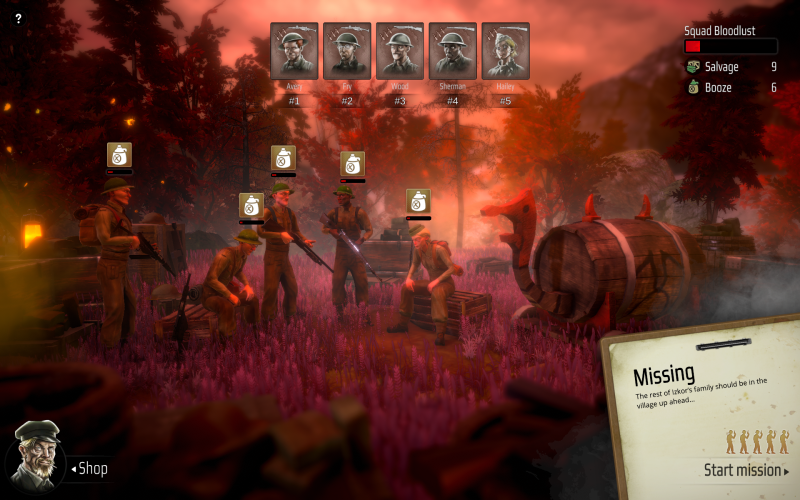 Mechanically and from a gameplay perspective, it’s more of the same, but with a few twists. You can choose one of the three starting squads and you’ve got three more to unlock by completing the campaign with the previous ones. Drunken bloodlust mechanic is new and replaces composure, everything else stays the same, including Izkor as the pimp smuggler for all your booze, weapons and new zombie deterrents. Mission mechanics don’t change much, except you always need to stay on the move when the zombies start shuffling or you’ll get swarmed in a blink. You can use zombie lures and baits to get a slight reprieve from rotten caresses and hugs, but you ultimately need to battle through the shambling hordes. Special zombies will start appearing the further you go. Red headed cooks are still present, just to give you one more thing to keep an eye on. It may be a fun and zany spin on the main campaign, but it feels slightly misplaced and out of touch with the message, feeling of loss and the terrors of war the game is trying to instill in you. 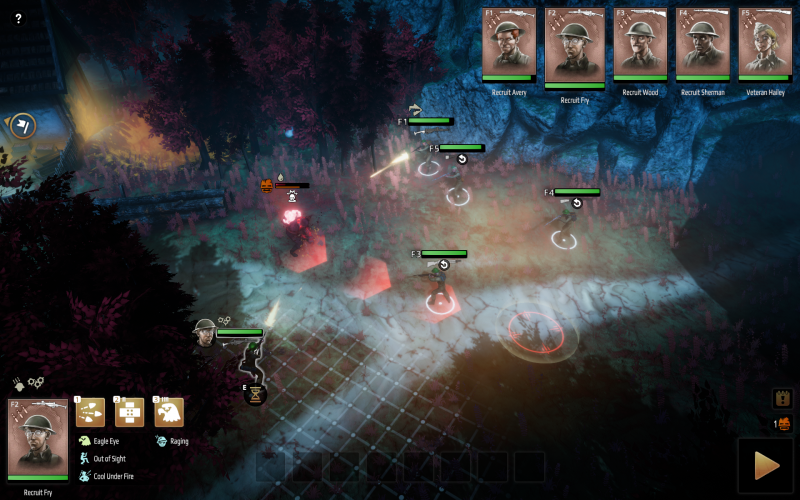 Even with all the caveats, Broken Lines’ story, characters and haphazardly stacked, but unique combination of gameplay elements does make it stand out from the usual turn based crowd and deserves your attention just for the inventivness and the guts of developers Porta Play to try something different. A commendable thing in today’s gaming industry. Although, all those foibles do make the game much more appealing on a sale.