Paradox Vector is a lovecraftian FPS metroidvania with vector-like graphics and impossible geometry. Paradoxically little of the latter, however…

Paradox is a self-style non-euclidean metroidvania with simple FPS gameplay harking back to the days of DOOM and Half-Life.

It’s a fairly simple and unassuming game, and can certainly provide a few hours (3-5) of entertainment, but it doesn’t take full advantage of its foundational ideas and has some conflicting stylistic choices.

You’re basically following the footsteps of your father, who took part in a South Pole expedition and discovered an ancient civilization. You build a time-traveling machine and go back to a very ancient past full of… machinery and tentacled monsters.

There isn’t much to say about the game; after going over its style, I’ll talk about the gameplay, divided into two parts, since there is a pretty sharp different between them in terms of level-design. 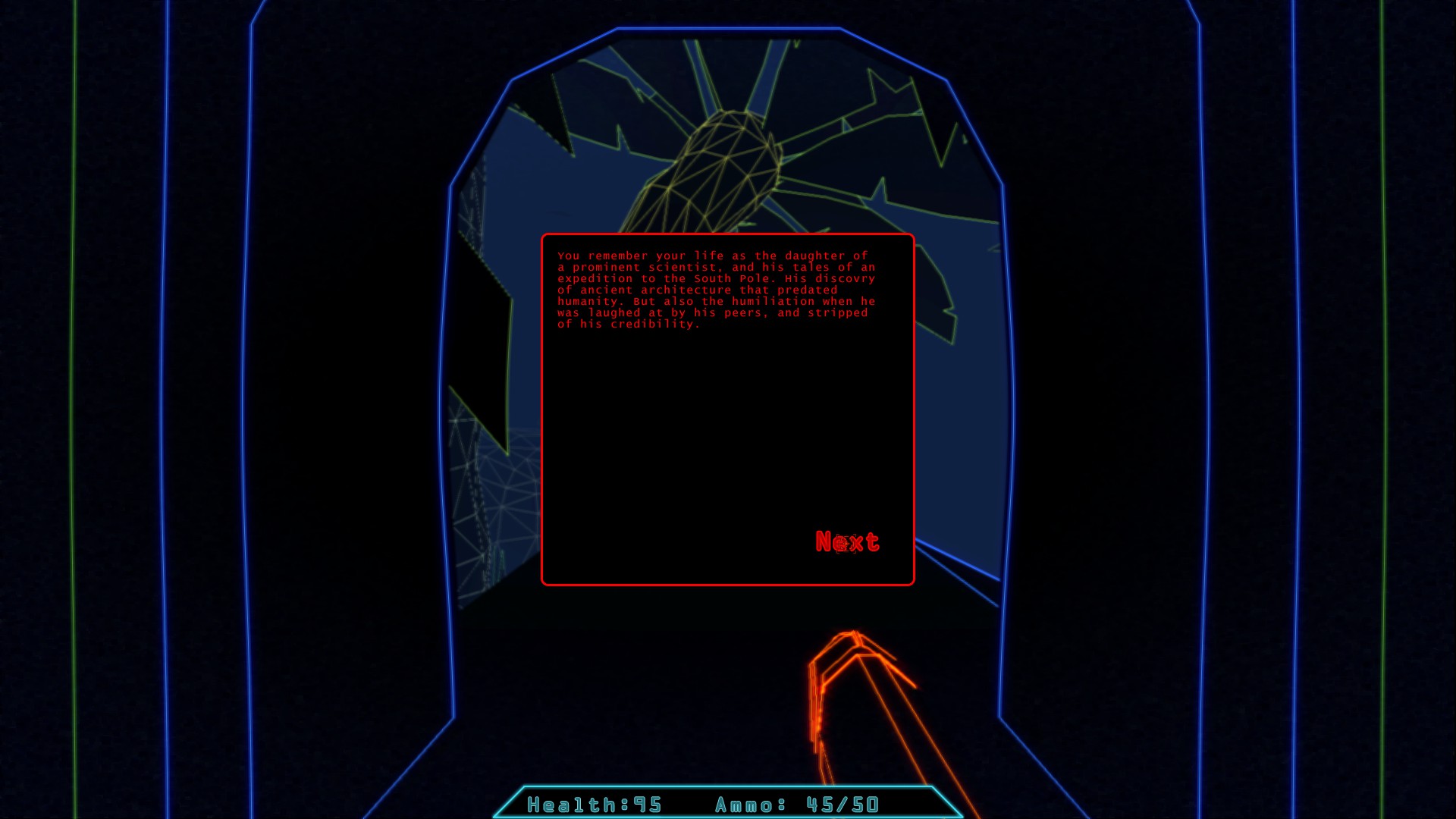 The most striking aspect about the game is probably the art style – the vector graphics in the like of pre-NES/Atari arcade games like Tempest and Battlezone.

Although Paradox Vector has a unique artstyle, it’s difficult to really call it “vector graphics” – especially since there is no overdraw at all. This removes some obvious but, I think, important constraints of the original vector style. These constraints weren’t merely a burden, but a source of beauty.
In here, you have the standard textured meshes – only the meshes are mostly black (with simple curves) and neon outlines.

I don’t want to be too harsh for the style’s fidelity to the older constraints! It does get points for originality, but it falls short of something… It fails to amaze or to do anything truly original with it.

Although it does look a bit samey, at times, it is mostly good, except for the transitional area (between the two gameplay sections I’ll discuss later), where there are organic (caves) and synthetic (architectural buildings) coming together. Here, the transitions look too sharp, incoherent and, honestly, a bit ugly.
Other than this, however, the game looks fine and it’s nice to see a different style. 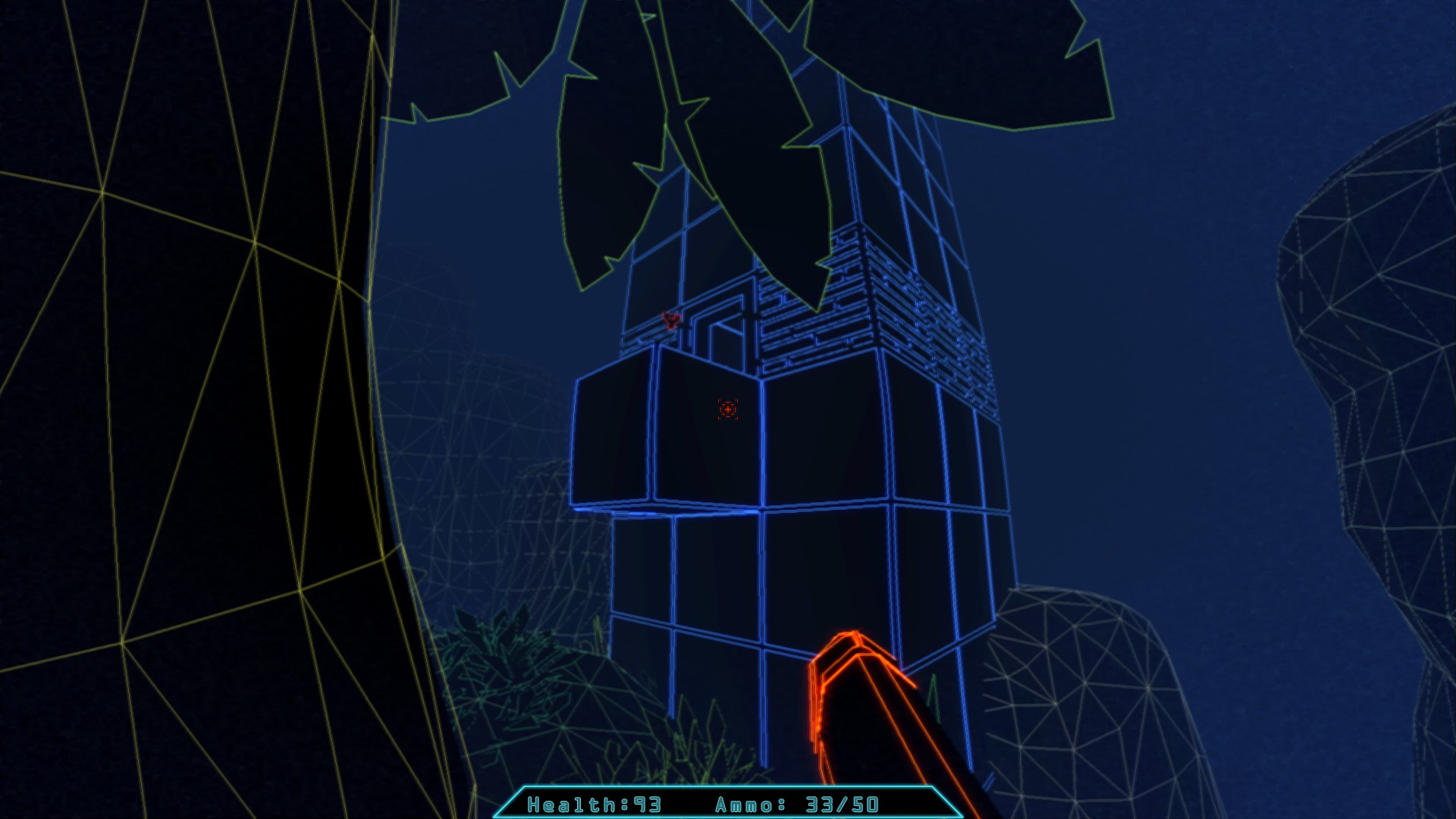 One thing I didn’t expect from the game, given the artstyle, was for it to be a Lovecraftian game. Well, it is.
From the very beginning, with the mention of your father going missing in a South Pole expedition, to the “cyclopean masonry” and the tentacled monsters… yeah, it’s Lovecraft, alright.

Aside from the tentacled monsters and the somewhat distorted lines (the square walls are just a bit off; perhaps also a hint of the Haunting of Hill House), however, all you get from Lovecraft is the short paragraphs a the start of dungeons.

Honestly, I’m not a big fan of this aspect of the game. First, there’s the art style, which, to me, isn’t conducive to horror at all. I mean, I don’t think you can get farther away from Lovecraft in terms of visuals! And, curiously enough, the developer has a tiny game on itch.io (Horror at the Museum) which has amazing style and would be much more appropriate. Oh well, I suppose you live and learn.
Another problem is that the writing itself isn’t very good. It’s quite stale, entirely lacking in Lovecraft’s poetry – which I find one of his best characteristics. Leakyfinger’s games are a better example of this kind of poetry.

The interpretation of “ancient” to be a retro-futuristic place with machines and tentacle monsters is also quite unsatisfying. Lovecraft’s ancient worlds were very “classic” – Greek, Egypt, and so on – with a highly developed culture (often imaginary). None of that is here, either.

Again, I don’t want to be too negative, but I feel like this is, by far, the worst aspect of the game. The lovecraftian theme is mostly referential (with little art in itself, even if derivative) and the artstyle is simply at odds with it.
Fortunately, this doesn’t affect the gameplay itself! 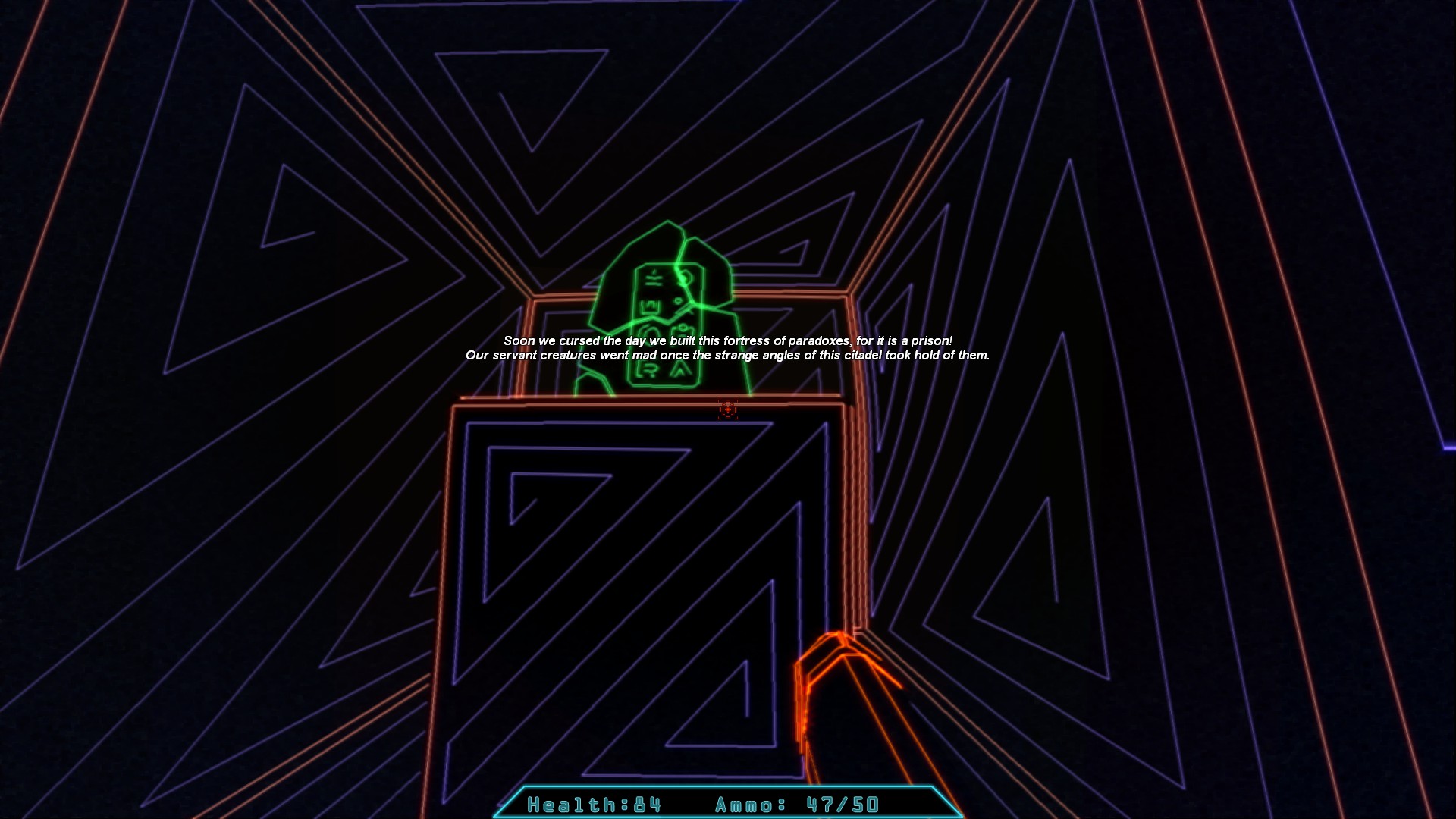 As I said, the game can be divided into two parts. In the first, you basically learn the ropes and find all the items and abilities needed to progress – all the while collecting 9 “keys”, one in each dungeon. Then, the “real” game begins, where go deep into enemy territory.
The first part of the game takes maybe 2.5 hours (with another hour if you go back to find the secrets), with the second taking around 1.5.

The first part is quite weak, for the most part. Most of the dungeons are rather bland, and there isn’t a very clear progression in difficulty (combat or exploration) or theme. They’re just “there”, I guess.
There are some exceptions, however! The second dungeon uses some clever tricks to change gravity and makes you traverse the same area in two very different a surprising ways – which was unfortunately never used again and even this first time was merely a fairly simple example.
The eighth dungeon was also quite good, with the best use of the “impossible geometry” ideas.

The rest of the level design varied wildly, though. Dungeons have secrets and maps. Sometimes the map itself is hidden, sometimes it is in the middle of the path. Sometimes you find tablets which are secrets, sometimes not. The same for vents.
It really lacks structure.

Most of the enemies are also very simple. There are shooting sentries (some fixed on the wall, one walking in a certain pattern), and then just chaser enemies. The chasers are very awkward, however, moving too quickly, often extruding from walls (and occasionally damaging you through walls, too).
You can find several different weapons (all of which have limited ammo, with more found throughout the levels or dropped by enemies), but none of them is particularly original. They’re okay, I guess. Pistol, machine gun, laser gun (continuous), and a rocket launcher.
The special abilities you gain are also simple and unoriginal – bombs, double jump, and a variety of “keys” to open doors, activate elevators, or portals. All of these abilities are “keys” – they let you access new areas, but don’t change the game too much otherwise. It lacks Metroid’s ice gun (or most other upgrades) which doubles are a weapon and a platforming ability that completely changes the way you see and interact with the world.

If the combat is awkward and too simple, where is the fun of the game?
Well, in the exploration!

This was quite fun, actually. Although it is fairly rare, the game features some corridors that warp back on themselves or teleport you elsewhere. There are also some hidden paths, vents, and so on, all of which demand you attention as you go through the levels. This was the most enjoyable aspect of the game.
While not something to write home about, it *is* fun, if you want a shorter distraction. 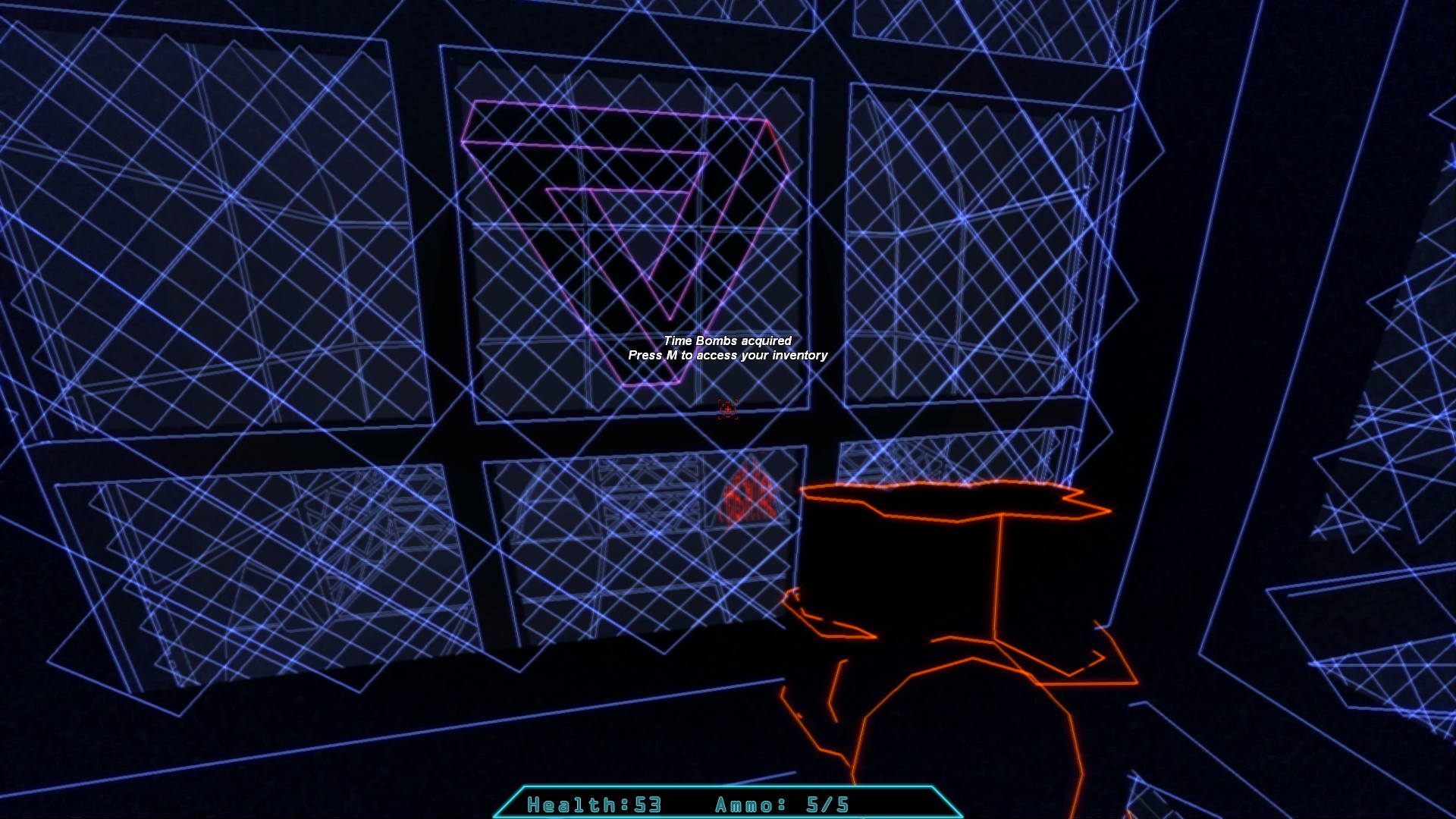 Gameplay II – into the Deep

The second part of the game comes after you get the 9 keys. Now you’ll get access to a second area.

While this area doesn’t do much to advance the themes or to use impossible geometry in all its splendour (with perhaps a room or two as exceptions), it does take the gameplay up a notch.

The are is quite large, with more difficult enemies, much more limited ammo and HP, and much more complex platforming.
I found it a bit bullshit at the beginning, but I soon got used to the change and actually started enjoying it.

You go through a series of 3 dungeons, though each is larger and more complex than the previous ones. The platforming had quite a lot of room for creativity and dexterity, too, which was fun – although I once found myself out of the level’s boundary trying to reaching what I thought was a secret!

The limited ammo and HP also made exploration a lot more important, occasionally crucial to your survival! 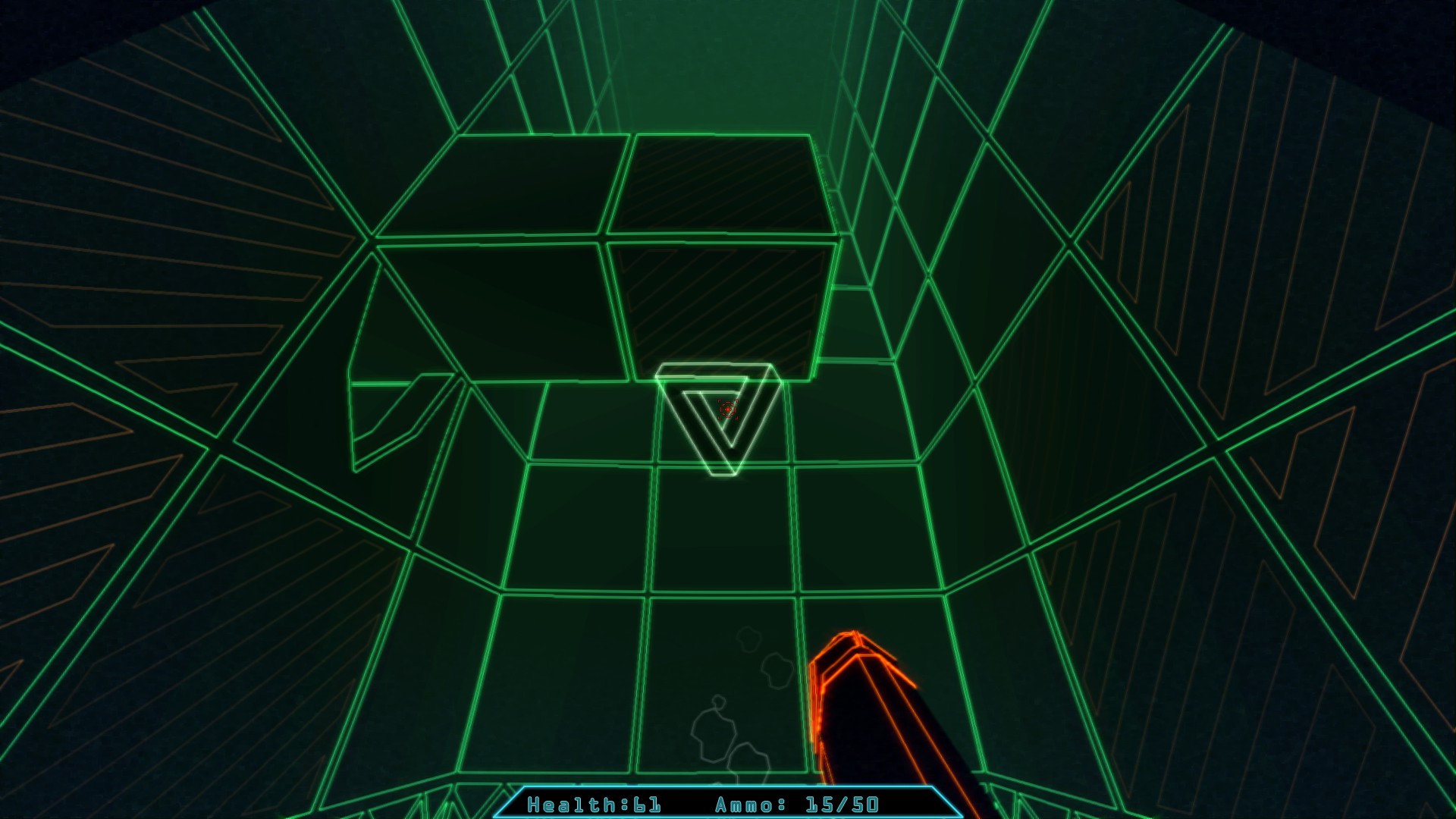 Ok, what is my verdict on Paradox Vector?
It’s mixed. I like the fact that it’s trying to do several original things (and some not so original), they are often not too refined and conflict with one another.

That said, the game is short, straightforward, and can be enjoyable if you want a short break from more complex games, or are looking for something more experimental (if less successful overall). I’ll leave it as a Save for Later.

While Paradox Vector didn’t quite strike my fancy, it did make me look into Schmidt Worskhops’ other projects – and there you can see the striving for something new, so the potential is there!
As I mentioned before, I’d heartily recommend trying Horror at the Museum. It’s barely a game, really, but I found it to have really beautiful atmosphere. For that alone, I’m glad Paradox Vector came my way, and looking forward to future games. 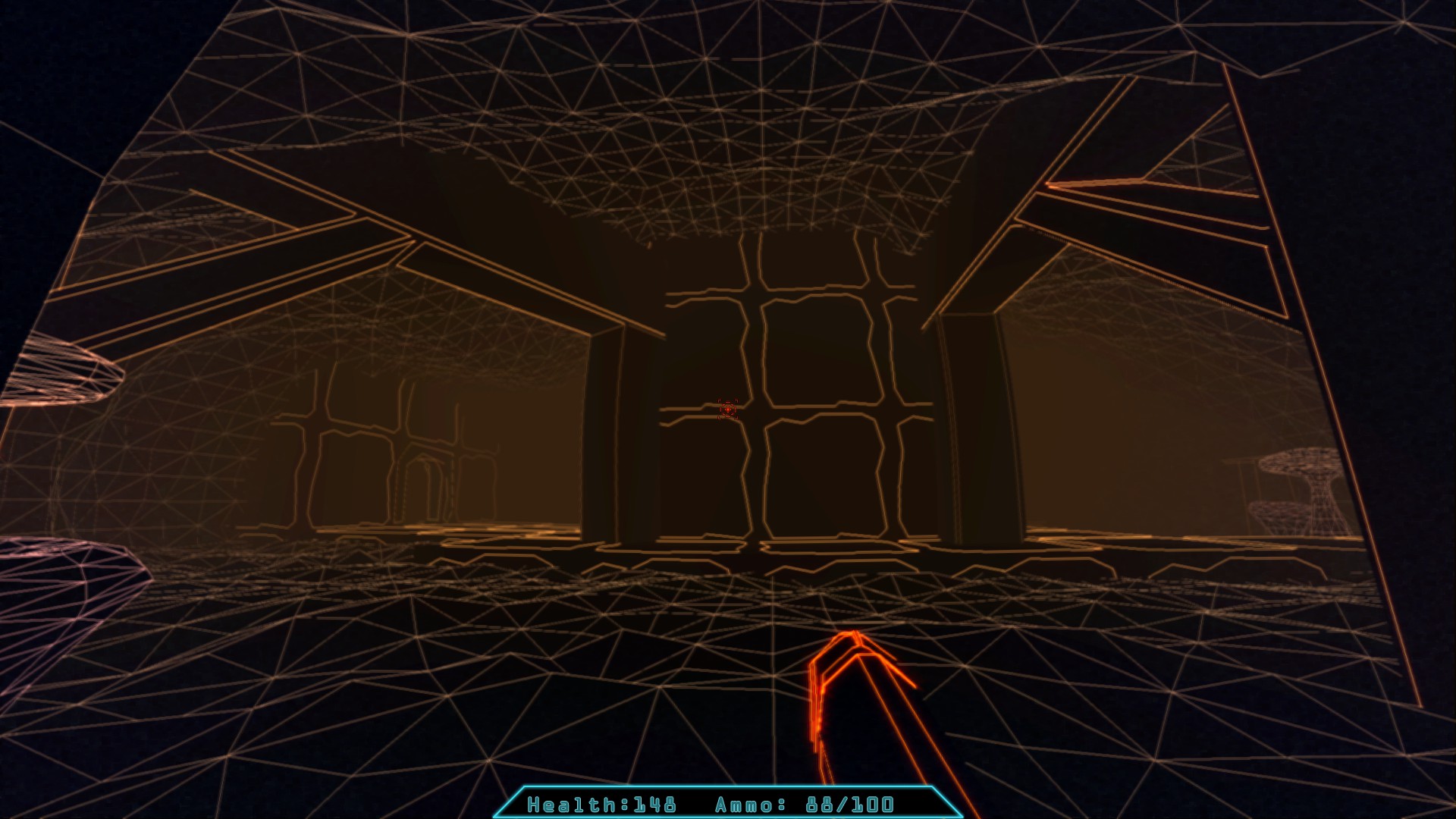