Strange Brigade nails the Indiana Jones inspired setting and delivers decent gameplay, though cringeworthy story and lack of content drag it down.

Strange Brigade (SB) is a single player and co-op third-person shooter set in the 1930s. The discovery of Seteki’s Tomb (ancient Goddess of the dead) by a British expedition threatens the entire world because of a curse. The Brigade, composed of the world’s finest adventurers, is called in to put an end to this threat – while recovering other powerful artifacts that may fall into the wrong hands. Not only brawn but as well brains will be essential to succeed.

Tales of guns, puzzles and secrets
While primarily a shooter, SB has a strong emphasis on secret hunting and puzzle-solving. Each stage has multiple primary and secondary enigmas to solve, mostly as combination doors of different types. On top of that, collectible Cats and Jars give additional rewards if all are found across a location. Adventurers will ideally spend an equal amount of time between fighting undead hordes and solving puzzles / finding secrets – this gives gameplay frequent pacing variations that prevent it from being too much one-sided.

Tools of the trade
Each of the four available adventurers has different passive and active skills, that suit them best for close or long-range combat – other than different applications. For instance, only one of them is able to open Glyph Doors found in levels. All the brigade members have the same guns, but also four unique active abilities each – unlocked with skill points gained by finding a certain number of Relics (secrets) in levels. These active skills are often very useful or powerful especially if combined with accessories or other members’ own skills. There is a decent variety of weapons and character skills to try.

Seteki’s finest
Enemy variety is solid across the board, with each stage introducing at least a few new foes. From simple reanimated cadavers to elusive assassins or devastating bomb-throwers – all the way to mighty mini-bosses such as the Champions of Seteki – combat never gets dull as far as variety goes. The presence of many traps in each level that can be used against the hordes, but also being a threat for one’s allies, further expands combat possibilities. Some enemies may also require a special approach in order to be defeated, when conventional means fail. 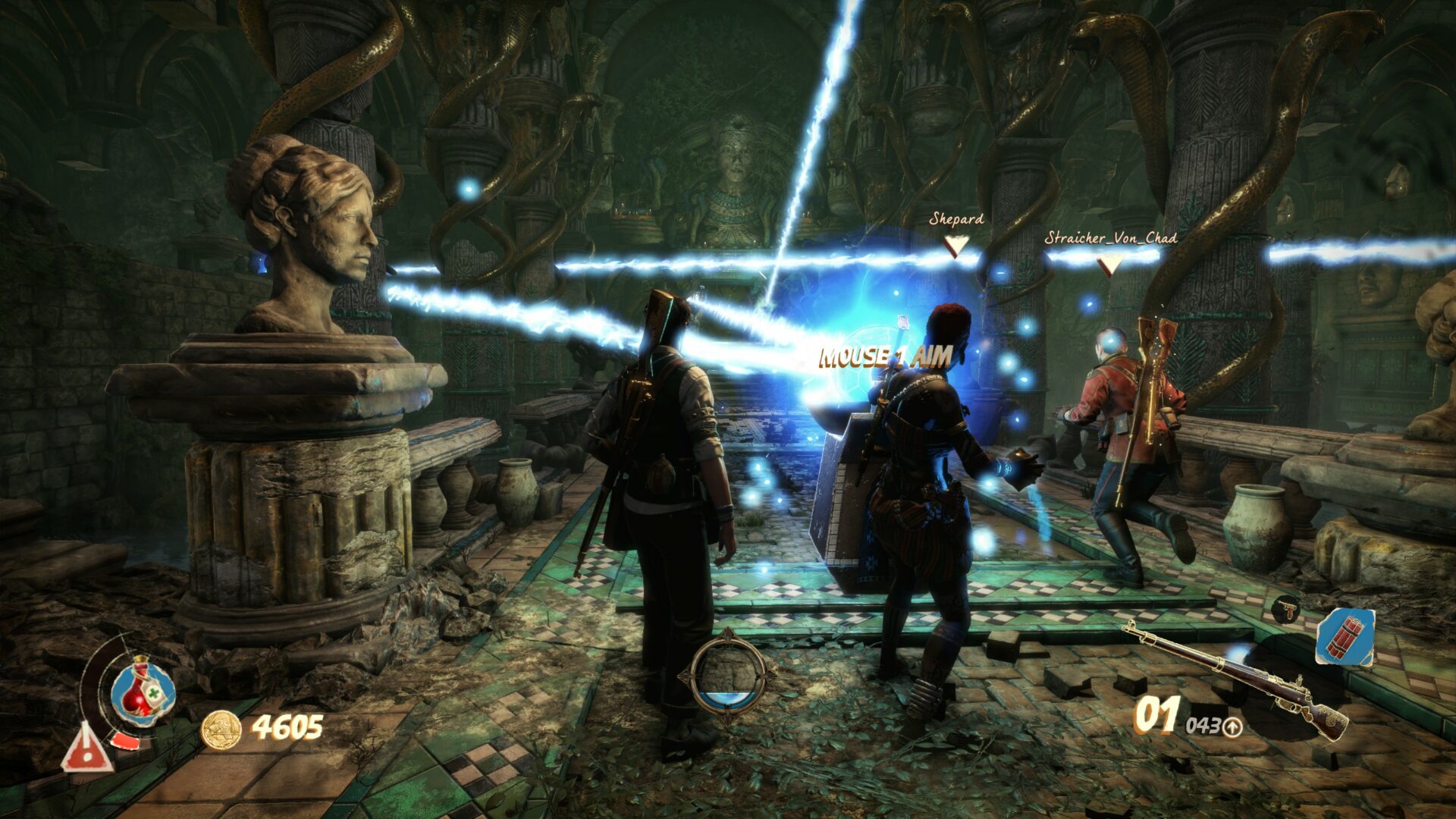 Now THIS is overpriced!
It takes around 6-7 hours to finish the game on Hard difficulty, this with taking time to find most collectibles and secrets as well. The additional modes such as Score Attack and Horde add no new content and are just a filler for achievement hunters, that most players won’t find worth doing. The title is sold at a blistering 50€ default price, delivering also not-so-stellar quality overall. Insanely overpriced for what it delivers.

Indiana Jones cringy wannabees
The story and characters are an absolute truckload of cringy catchphrases, embarrassing situations and unnecessarily over-the-top moments that fail to be amusing. Combined with the obnoxious narrator that always seems to be desperately trying to be fun in a forced way, the story becomes an annoyance very soon. Stereotypical in its developments, repetitive and just bland, the narrative of SB is a miserable affair at all times.

Balance, where art thou?
The game fails to properly diversify the various weapon classes and give them a distinct feeling based on their role on the field. The starting murder tools are borderline garbage no matter what – while among mid-tier weapons, only Sniper Rifles prove to be worth using as they adapt decently to all situations without downsides. Shotguns, pistols, SMGs are at all times mediocre. The last and most expensive weapon (Aubley Rifle) is the definitive one, combining SMG rate of fire with Sniper damage, making any other weapon obsolete. The same concept applies to character abilities, only few being really worth using. 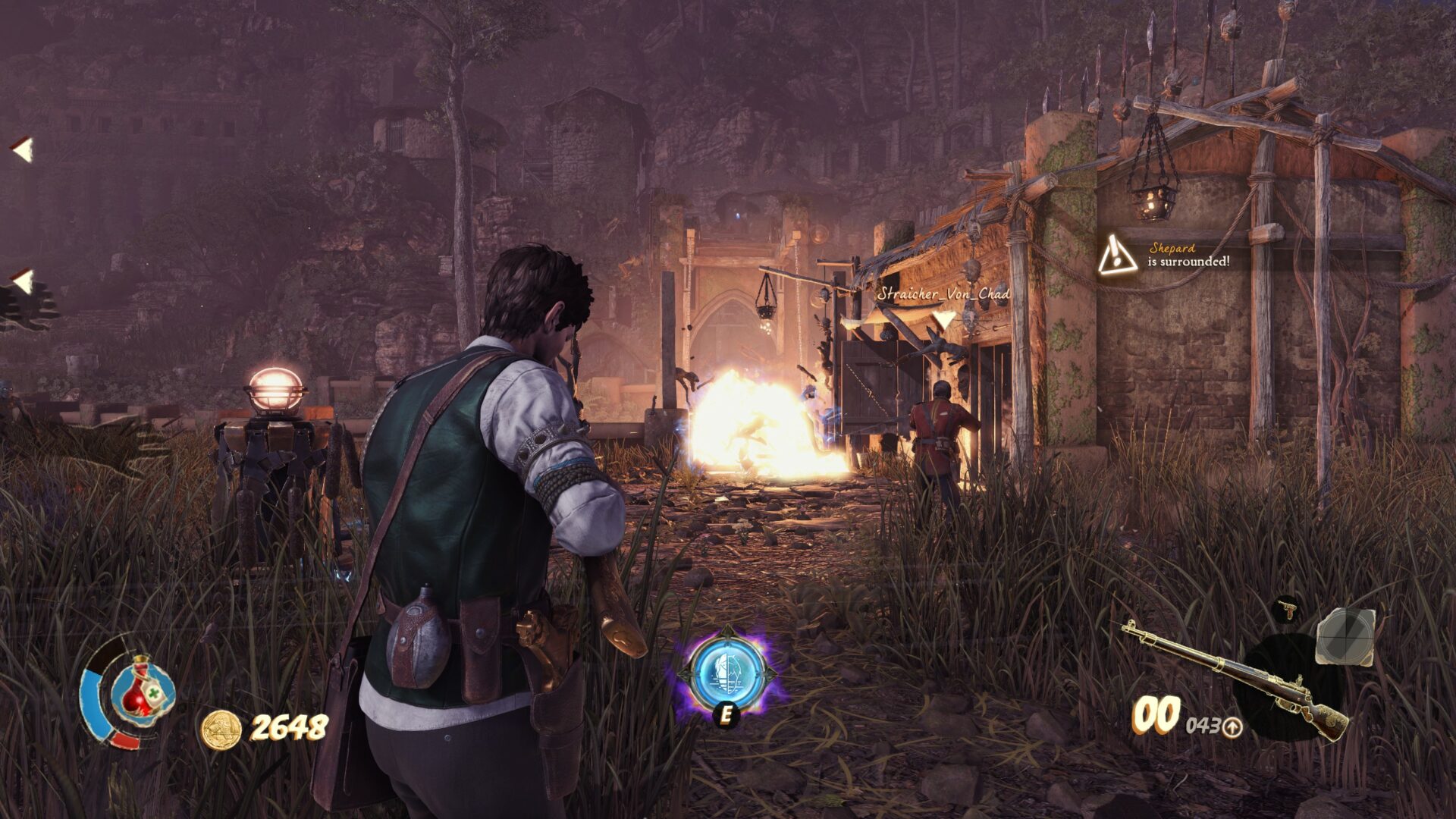 Exploration
Is performed on foot across reasonably vast locations ranging from abandoned dig sites to haunted caverns. While exploring, an abundance of breakable objects and small Gold piles are present to collect – while also ammo piles and potions are found fairly often to replenish resources. Keeping an eye out for Chests, Relics and Secrets is essential to collect large amounts of cash, skill points, weapon upgrades and lore items one may find in them. Many of such containers are locked behind puzzles or secret paths in each level.

There is no local map and levels often have one-way drops that prevent backtracking after them. Collectibles include Diaries filled with (unremarkable) lore, Cat Statues opening a door before the end of a stage if each is found, and Jars whose purpose remains a mystery, probably just collectibles.

Combat
Plays out like a third-person shooter with no ADS except for a single special weapon, not even for snipers. Enemies range from simple undead corpses to much more dangerous advanced and elite ones: most share the same weaknesses such as headshots inflicting severe damage, melee knocking them down ready for a finisher and traps instantly killing most of them on the spot. Using character abilities at the right moment is important to escape the most intense fights, while also activating traps and explosive barrels scattered around helps a lot against overwhelming numbers.

In case of death, players can be resurrected by a teammate at the nearest Sarcophagus – this can happen infinite times and is really cheesy, as a 4-player team even on Hard, will rarely be wiped out. In case of a team wipe, the level will restart from the nearest Checkpoint. Special weapons acquired from crates costing Gold are potent, but only have one magazine and cannot be replenished.

Puzzles
Are found in each map and mostly are about inputting the correct combination in a door, by finding clues lying around. Some other puzzles are more unique and often related to the main quest. Solving these enigmas grants access to Relics and other useful treasures, often in the form of Gold and Gems.

Character Setup
Can be done before a mission or at a Weapon Table in any level, the latter unable to purchase new weapons or swapping characters though. Each weapon has 1 to 4 Gem slots, using gems found in Chests to enhance that weapon with the relative buffs, such as armor penetration, better damage or elemental powers. Characters can freely choose their Amulet (special power) between four each, carry one Primary and one Secondary (worthless) weapon. New weapons are bought with Gold kept at the end of each mission, while Gems can only be found and Amulets use Skill Points from relic sets. 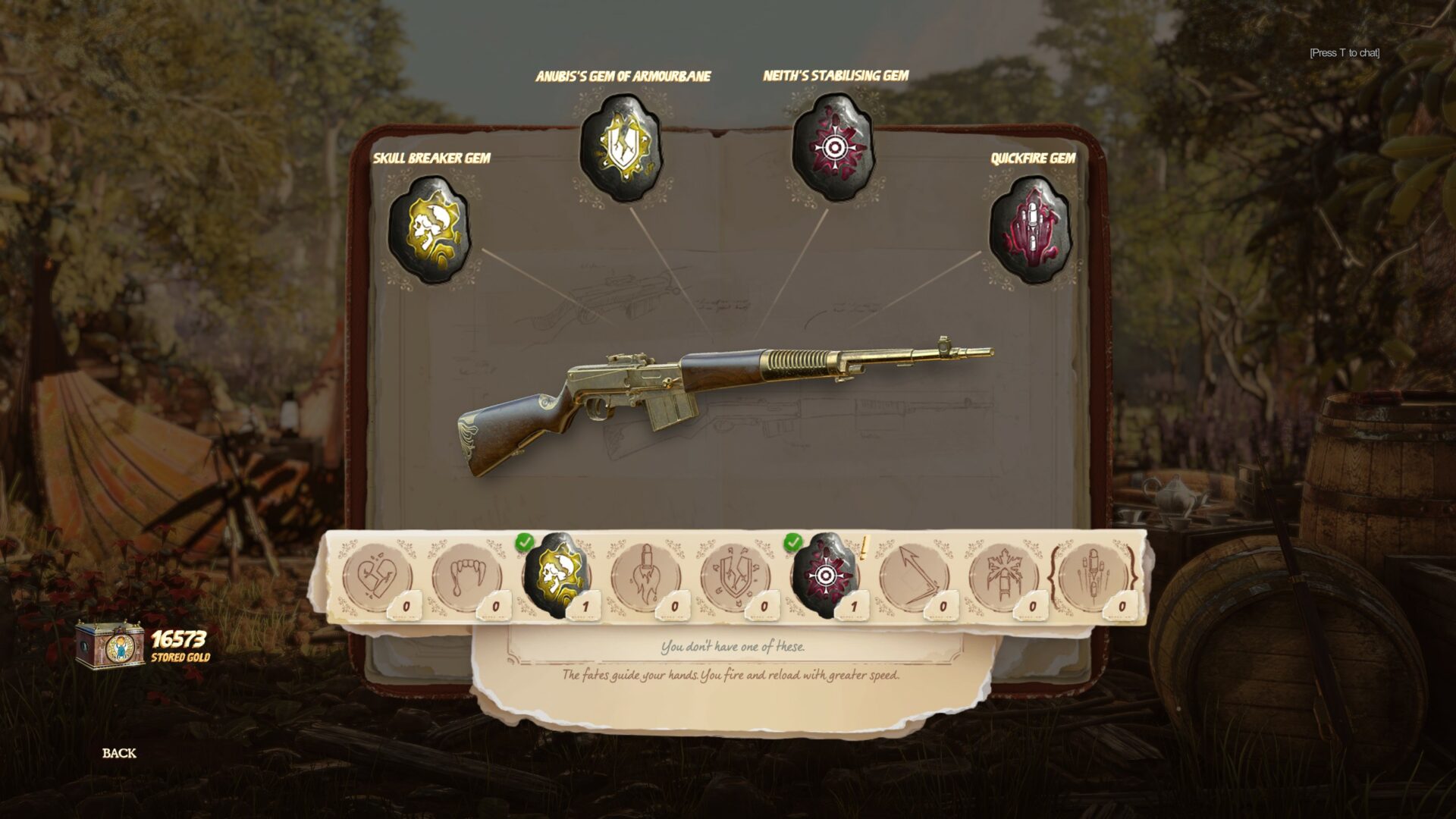 Strange Brigade is ultimately an enjoyable shooter, that delivers the best experience in co-op with at least one friend. The gameplay is varied enough and at times reasonably challenging, though in the end the overall content amount is nowhere near enough to justify a 50€ price tag. The unremarkable, embarrassing story and balance issues further penalize the game, which sets itself on only decent levels overall.