Silk Roads: Caravan Kings is a trading/travelling game set along the late 1200s Silk Road. It’s mechanically uninteresting, but it can provide an atmospheric distraction for a couple of hours.

In Silk Roads: Caravan Kings, you take command of a Venetian merchant tasked with bringing exotic goods to Venice. You can travel all the way to Xian, China, within a caravan of diverse merchants of various beliefs.

Unfortunately, it is nowhere near as good, mechanically, as two similar games: Caravan and Merchants of Kaidan (which are themselves not perfect at all). In fact, the trading is almost irrelevant. Instead, the setup is merely a vehicle to present the various random events during your trip.

Basic gameplay consists of three components: travelling (mostly about random events), trading, and events. I’ll be going over these, below. 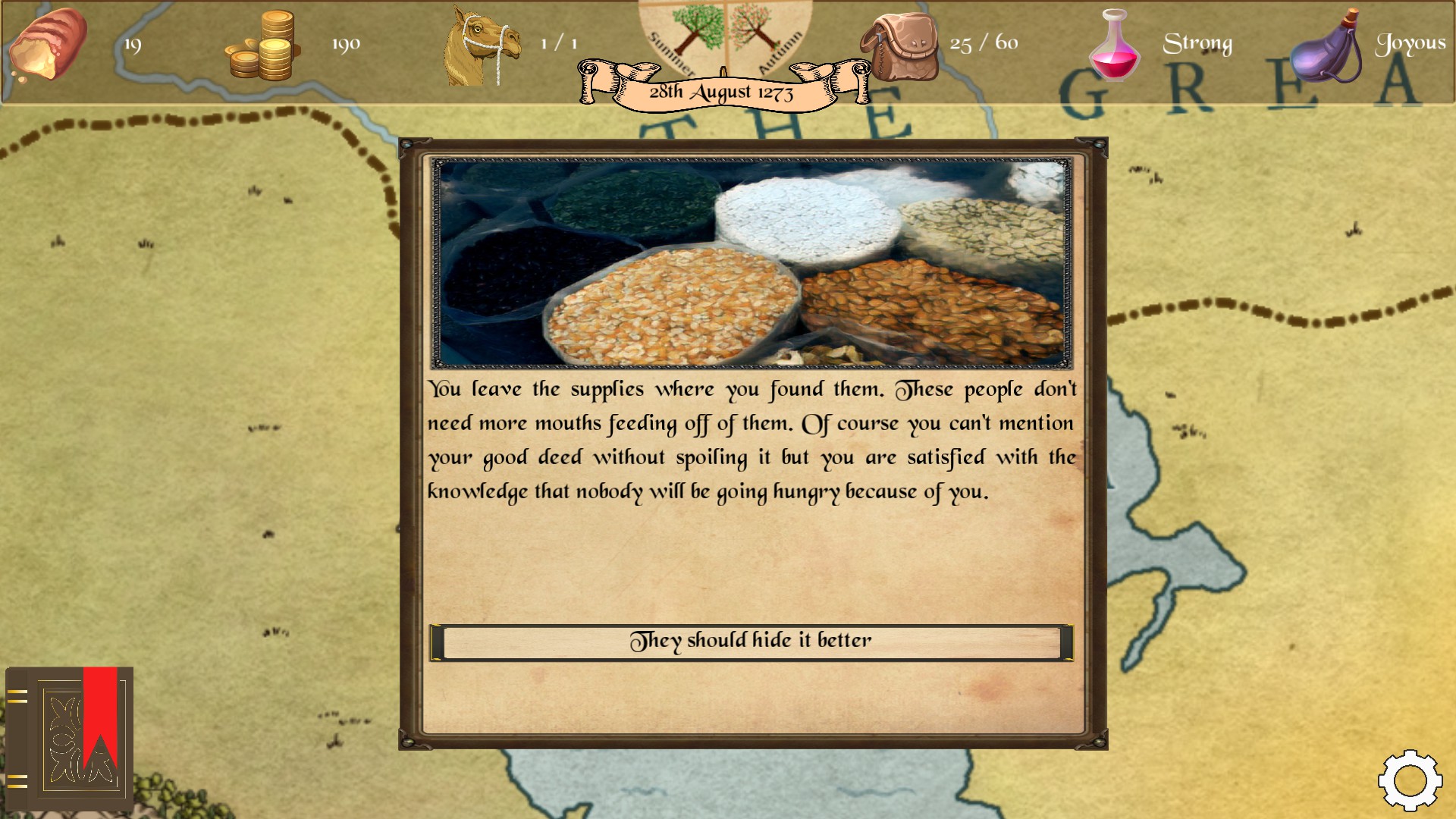 The game looks okay, if fairly simple. You’ll spend most of the time looking at the world map, which is alright, if somewhat low in resolution. Then you’ll see some stereotypical images of cities (Chinese architecture, Islamic rock cut , Indian temples, Mongol tents, and so on) or related events. These are clearly composite and fairly crude, but they’re thematic – if you don’t look too closely.

The music is a bunch of tracks that play similarly at random. This is a huge problem, for me. While the tracks themselves sound good (if, again, simple and few) it more or less destroys immersion when you get a christian orthodox chant in the middle of the Gobi Desert.
I am okay with games being simple and limited (especially when from a solo developer!) but the various elements should be carefully put together, which is not the case, here.
It was also lacking some styles – there was no Indian or Mongol music, really, at least that I’ve encountered.

Writing-wise, there are some typos here and there, but not too big of a problem. The events themselves are okay. Some are amusing, but I didn’t find anything too significant, to be honest, and got several repeats in a single playthrough. 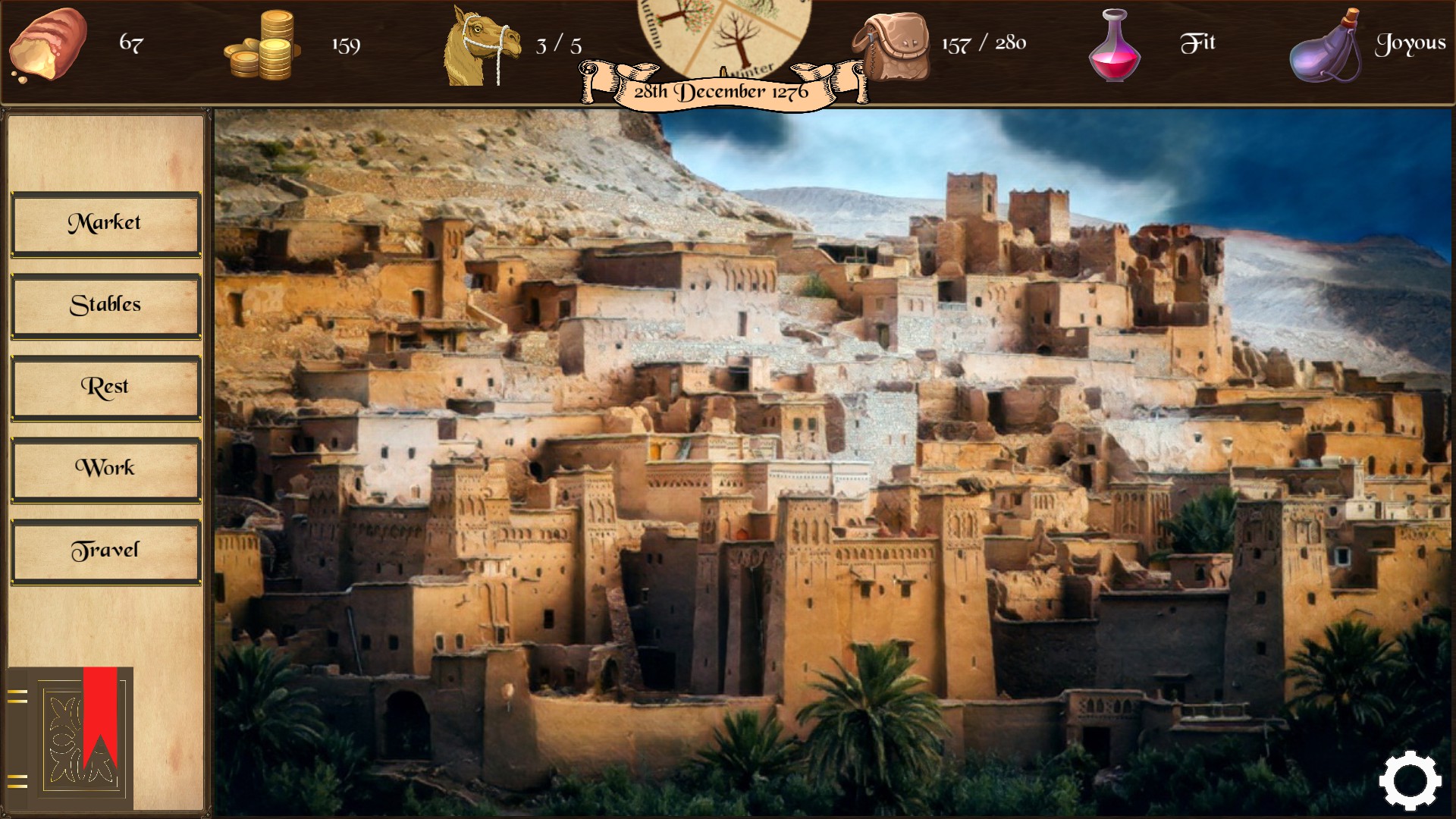 You don’t get many choices regarding where to travel. Most of the cities you visit have a single possible way forward, aside from turning back. Occasionally, you’ll get a choice between two paths: want to go north through the steppes, or south through India?
You’ll have to “manage” food, health and humour, but these are largely irrelevant. Food is cheap, so you can simply stock up whenever you reach town. You’ll also have the option to rest for a week (for free) to restore health and humour. As far as I know, these attributes only affect travel speed and perhaps some events, but they were not at all imposing on my playthrough.

While I must admit I was disappointed by the lack of choice (you never get to plan any path or choose specific cities), this makes some degree of sense. These cities are very far apart, and I suppose most merchants would have a fairly fixed trip. You go there and back. The aforementioned games, Caravan and Merchants of Kaidan, were far more interesting, mechanically, due to the high number of close cities, but here the trip is more of an excuse for the thematic events. 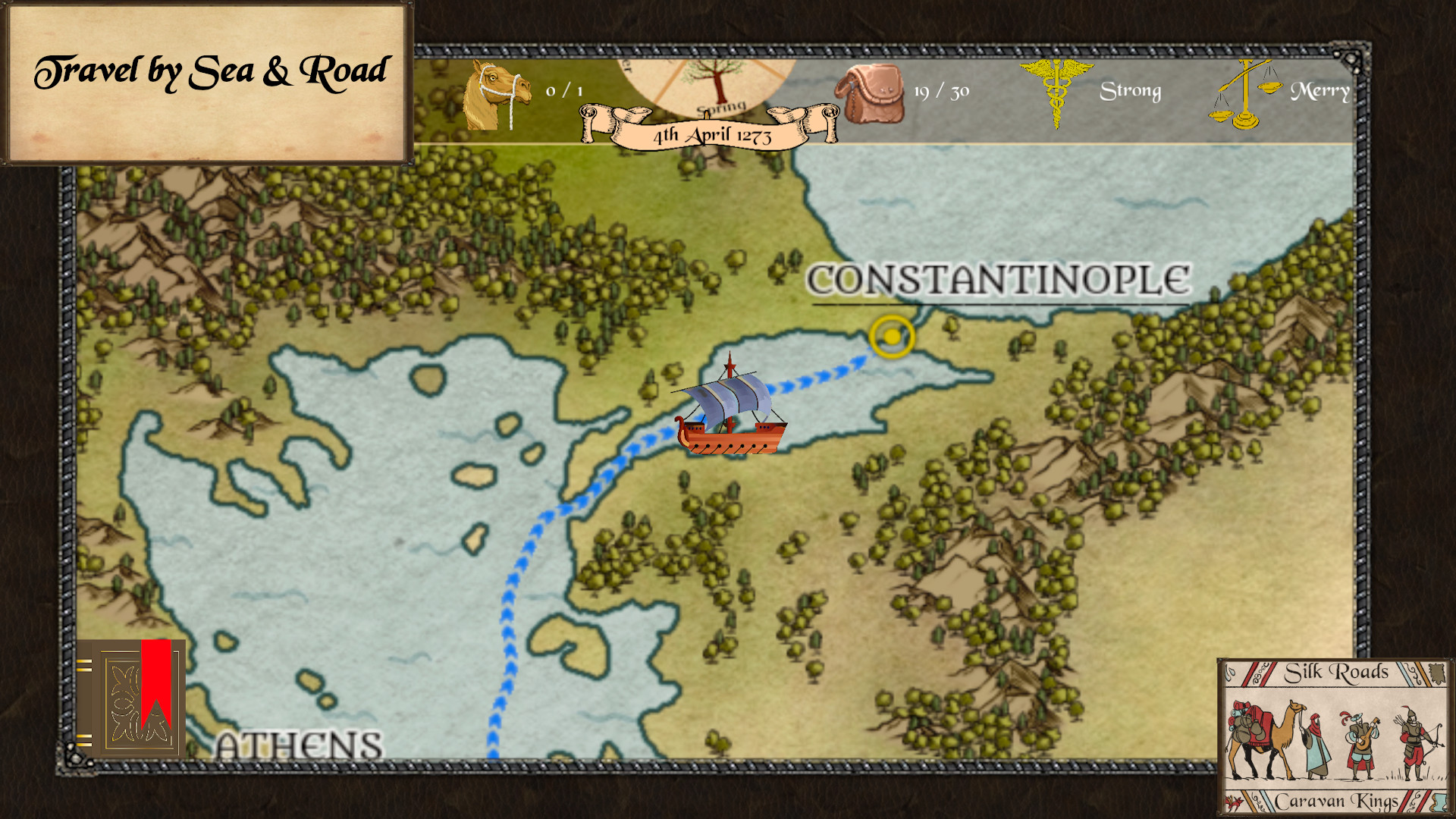 Trading is yet another disappointing aspect of the game, mostly for being so simplistic. There are only 5 different goods: Bread, Silk, Ivory, Fur and Spice. Each city has its own price, with small fluctuations (I noticed the fluctuations because they change every time you restart the game). Unfortunately, these are rather symbolic goods, more than anything. Silk will be dirt cheap in China, Spice dirt cheap in India, and so on.

As I said before, you don’t really revisit cities (on a single trip) or plan a complex path, so you never get the opportunity to buy low and sell high to any significant degree. This is the biggest mechanical problem, also because you can “work” for a month in cities. This will get you any money you need.
Sure, maybe you don’t want to waste time (as the main mission is timed), but this isn’t really a problem. For example, I completely ignored the time limit on my playthrough, went all the way to China, bought a bunch of Silk, and then sold them in Venice for an insanely high price – more than enough to cover the overtime expenses.

The bottom line is that trading is too easy, too simple. You never need to think about what you’re doing. As a trading game, Caravan and Merchants of Kaidan are far, far better (the former even sharing the general theme).
What is this about, then? 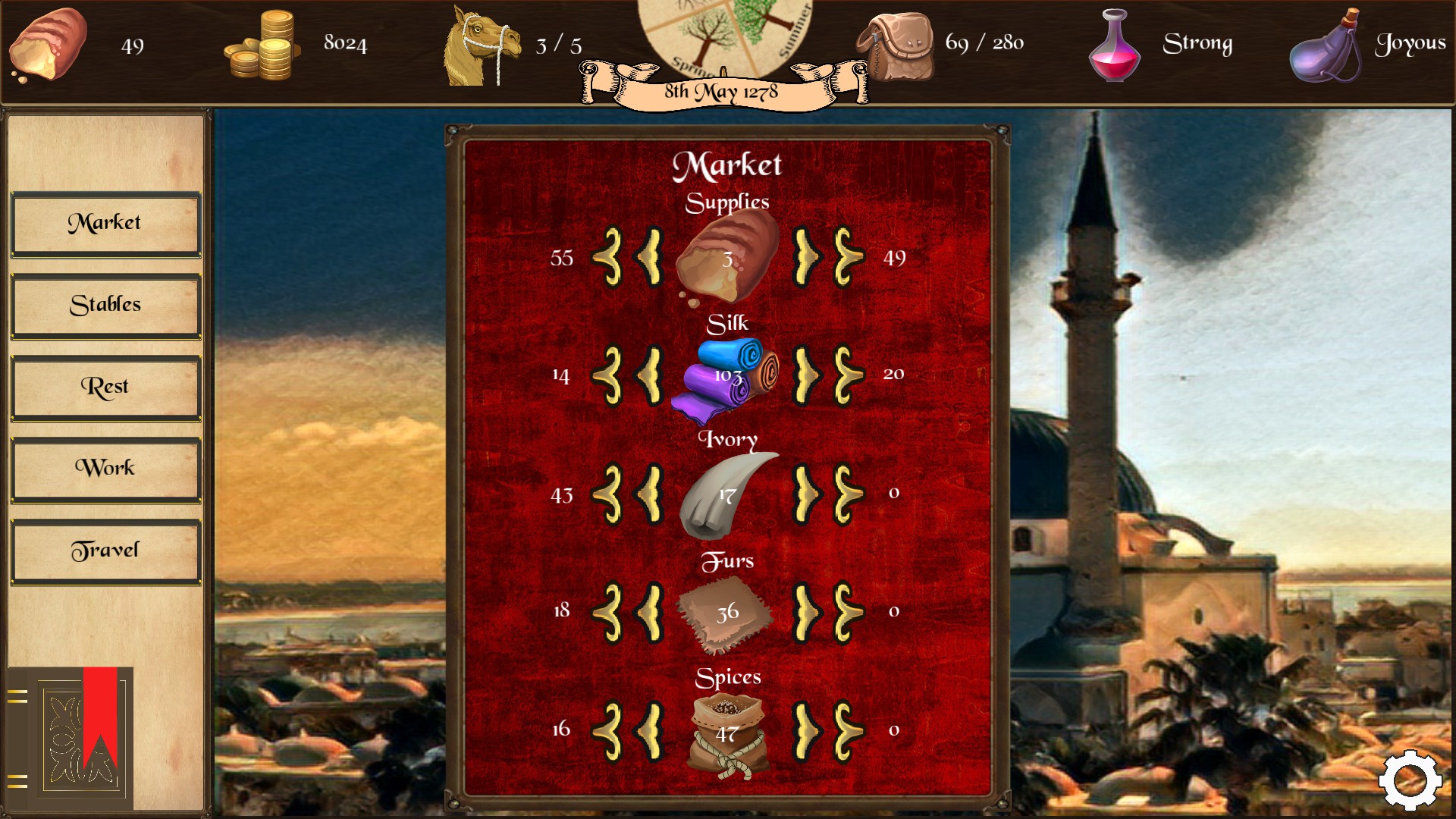 Well, as far as I can tell, this game is about the events. While travelling, you’ll get a variety of small events, like a text-adventure. These aren’t deep, for the most part, but short vignettes.

The game only represents some major world religions (Christianity (Catholic), Islam, Hinduism, Confucianism and Tengrism), these being mostly a symbol for the different “cultures” through which you travel. You maintain a relation with each, which is affected by some events. This relation stat affects prices, but that’s about it. It’s also very easy to keep them all very high.

Mechanically, once again, the events are disappointing. As far as I could tell, your choices are deterministic – the same outcome occurs given your choice. Some of them are pure flavor text, some of them also affect some stats I didn’t mention in the review (but which are really not important at all).
You rarely have to make any real choices, beyond which stat to increase. Most of them affect only one stat, or increase every stat.

Overall, I think the best description I can give for the events is “flavor vignette”. They’re mechanically irrelevant, for the most part, but they provide little glimpses into the stereotypical cultures that the game portrays.
Looking at the game as a vehicle for these vignettes, it’s okay. It’s not brilliant, but it’s okay. 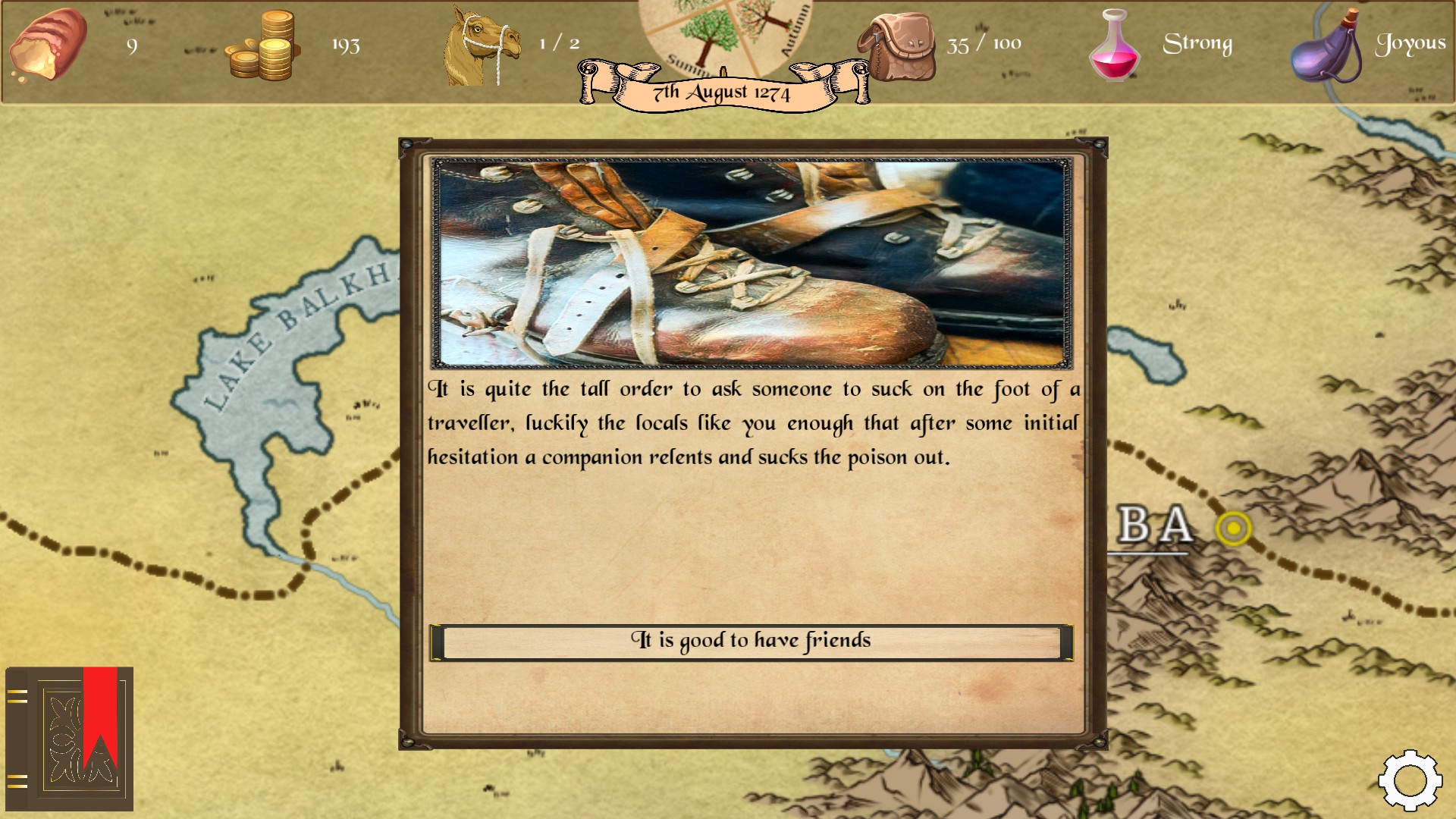 While the game is primitive in most respects, it is fairly well executed and can be immersive, at times. The biggest problem is not the game’s limited tools, but how even those are never used to their best extent.

For a game about travelling from Italy to China, through India, Iran and the Central Asian Steppes, the game has remarkably little local color. Coupled with its mechanic simplicity, it really doesn’t warrant more than a couple of hours for most players.

That said, it delivers the main idea in a couple of hours. Undemanding as it is, you can try it for an afternoon for a historical trip.