Rude, I freelanced in your restaurants and now you’re trying to run me off the road!?!

Before my love of cooking came along, it was my weakness to cooking simulators so when I came across Cook, Serve, Delicious four years ago when I was still fairly new to Steam and I was one of those sacrilegious people that didn’t know how to cook. It took me a while to warm up to it as I found out I incorporated advanced food in my menu way too soon causing it to be way too hectic too soon, but I soon found myself compelled to not just have a five star restaurant, but do every optional side stuff. So, of course I’ll pick up the sequels. The second installment suffered a bit from second book syndrome (or second game syndrome?) to me, but that doesn’t mean I’ll be turned off by visiting the most recent, third installment to see what changed this time. Luckily, Cook, Serve, Delicious 3 manages to come back better, and harder, than ever.

Cook Serve Delicious 3 opens up to a terrible note. After building up your restaurant again inside the Teragon Supertower, it gets utterly destroyed one day. It turns out that while you were trying to build up your restaurant and being hired to cook for others, a war has been going on. It just wasn’t until today that it really affected you. It was a miracle that you survived, but at the same time all of your hard work is down the drain again. You can’t possibly hit success a third time right? Well, I guess third times the charm as two visitors arrive. Two robots named Whisk and Cleaver (which totally surprised me by having voice acting behind them) happen upon the scene and decide to help you get back up on your feet by converting their boring ‘ole truck to a food truck. This marks the start of your adventure across the war-torn United States. 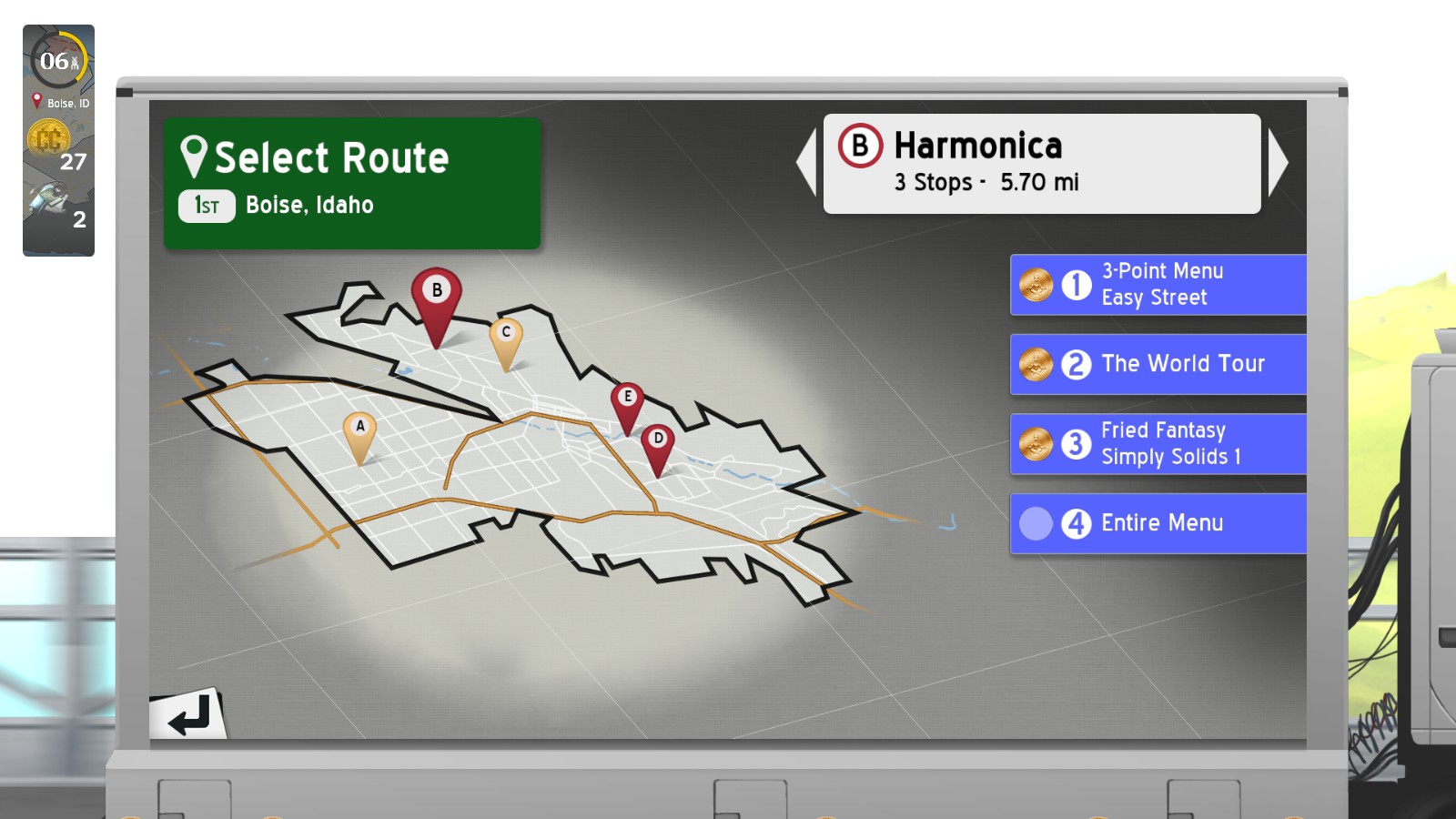 The gameplay of Cook Serve Delicious 3 will be familiar to those that have played any of the previous installments, with some changes to account for you serving out of a food truck. You, of course, won’t be staying in one place so you’ll be traveling through territories (which you can switch between once you unlock more) and within those routes where you’ll choose the day (or level) you want to do. Each day has a specific theme (like breakfast foods) that will affect what you can add to your menu and generally a point minimum you have to hit. You see, difficulty is now measured by points that are assigned to food with 0 being the absolute easiest to 5 being the most complicated recipe you could punish yourself with. The difficulty mostly comes from how it’s assembled and how many ingredients there are, thus more buttons to remember and press. Though of course, difficulty also depends on the player and how familiar the dish is to them. I may be slow with most sandwiches and burgers, but others might not. Either way, dishes are also separated by whether they’re Special Orders or will be made in your Holding Stations. 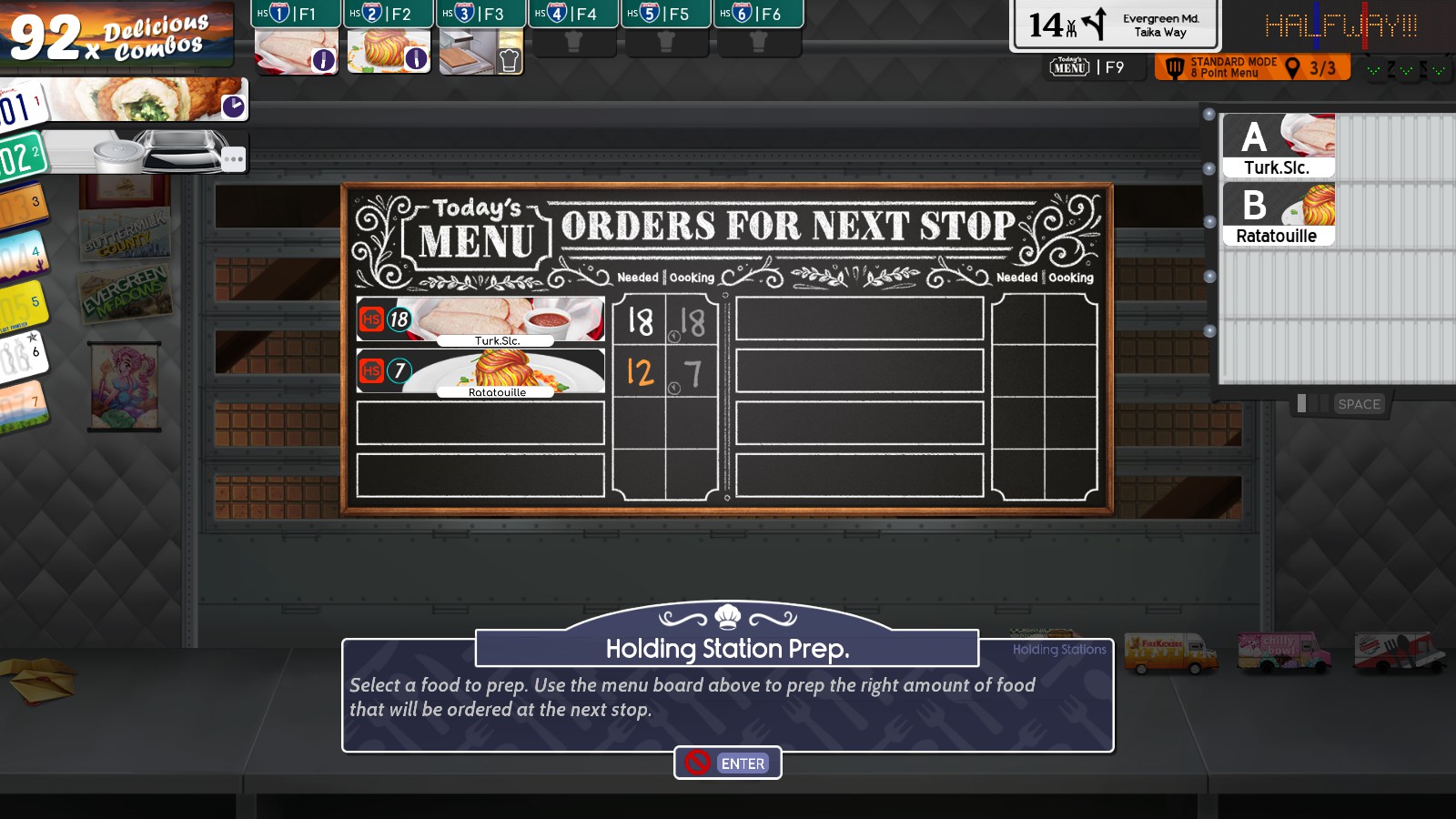 Once your menu is all ready to go, it’s time to head to your stops (the number depends between days). As we are now on the road, there are no more rush hours to worry over. Nope, just worrying over the whole day. Instead, the day is broken up between traveling and serving at a stop. As you’re traveling, you can prepare food in your Holding Stations that customers will be ordering at stops. Each dish will prepare a select number, some you do have to option to prepare one serving, and some will require additional ingredients to be added when serving. These do have a spoil timer, which is different depending on the food, so you have to look at how far you’re from the stop to prepare it so it won’t spoil right as you get there. Luckily, you’re given how much you exactly need beforehand so you’re not making too much or at least account for the dishes that is popular that day and happen to not make that many servings. Though, don’t think this is you’re moment of calm as you’ll be getting Special Orders to prepare in your Prep Stations. These won’t be served until you’re at the stop, but the customers that ordered them will not wait around if you didn’t start it yet even if the order came in right before you parked. If you’re taking too long, customers will get impatient and the order will slowly inch away. If it’s a holding station, you can fight it off with starting the cooking process, but it will only give you a couple seconds flickering yellow/red once finished before they leave in anger.

A very important addition added was auto-serve and I honestly don’t know how I survived without it. As the name suggests, one button press and all orders that are already ready are served. Considering that this installment is, or at least feels, faster it is a big help especially when you’re in the middle of assembling an order. This works into your strategy, along with holding stations being the bulk of orders, as you’ll of course want to have a menu that is mainly food that can be auto-served and not one that requires extra steps. This also calls into needing to balance your Special Order menu with the Holding Station food as well. You can have Special Orders be the high point foods, but it can get in the way if it causes you to take too long causing Holding Station food that requires an additional step when serving to lag behind. 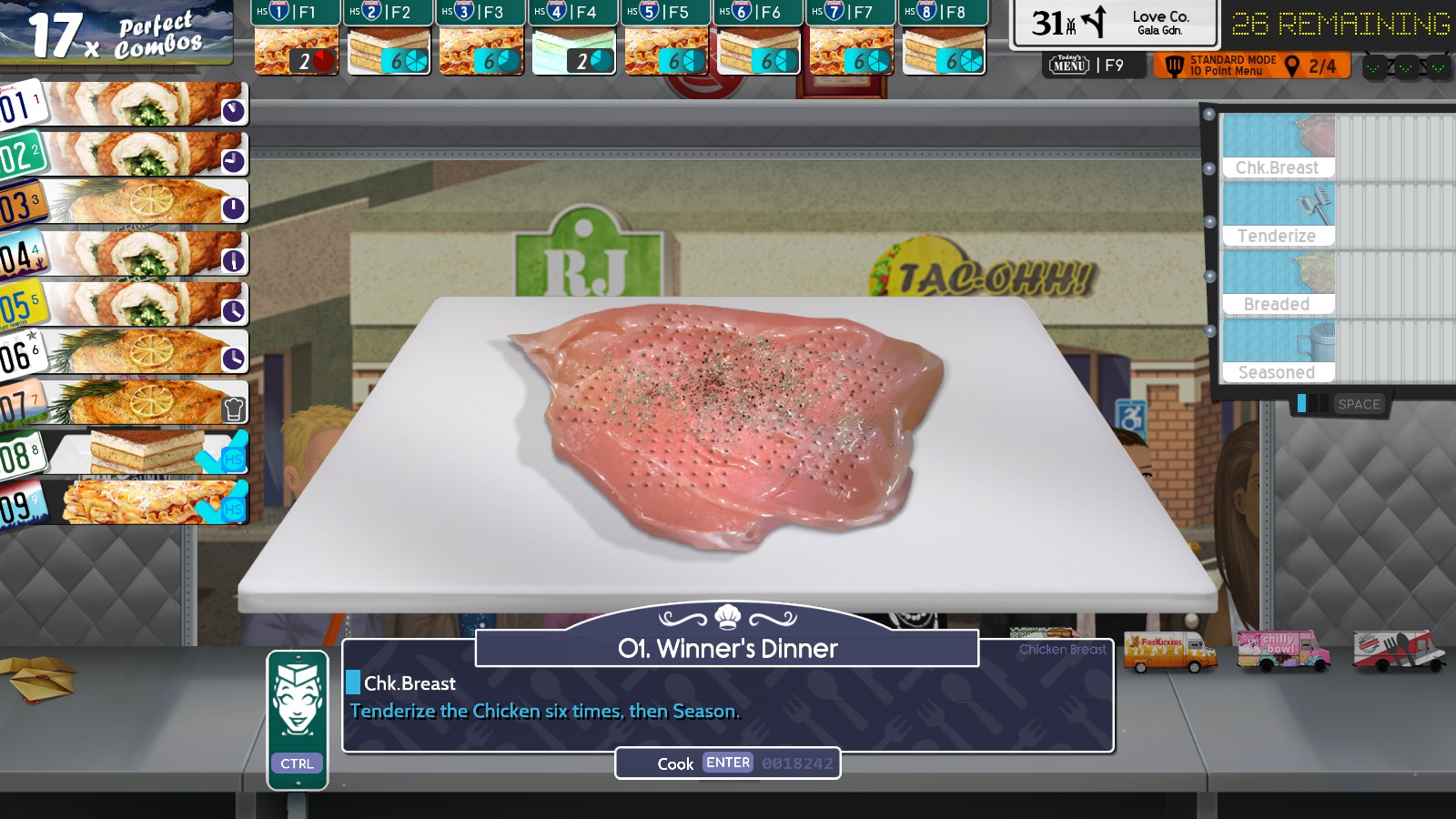 The day will eventually end once you reach the last stop and serve the last customer. Depending on how you did, you’ll gain a medal for your efforts, a couple coins to buy more food to pick when putting together your menu or buy decorations for your truck, and experience to level up your YUM level. Each YUM level gives you an upgrade part to upgrade your truck. This mainly goes into adding more Holding and Prep Stations, but also goes into other aspects like adding freshness or an additional serving for Holding Stations. More Holding Stations is obviously ideal, but Prep Stations that can make you more stressed as more orders will be out at the same time? Well, there is some incentive. If a level has too high of a point requirement for you, adding a Prep Station will lower it as you will be making it harder on yourself anyway. If you do this, you will have to adapt your menu to account for this. Maybe have food that prepares many servings in your Holding Stations or have most of your many be food that you know you can get done quickly. 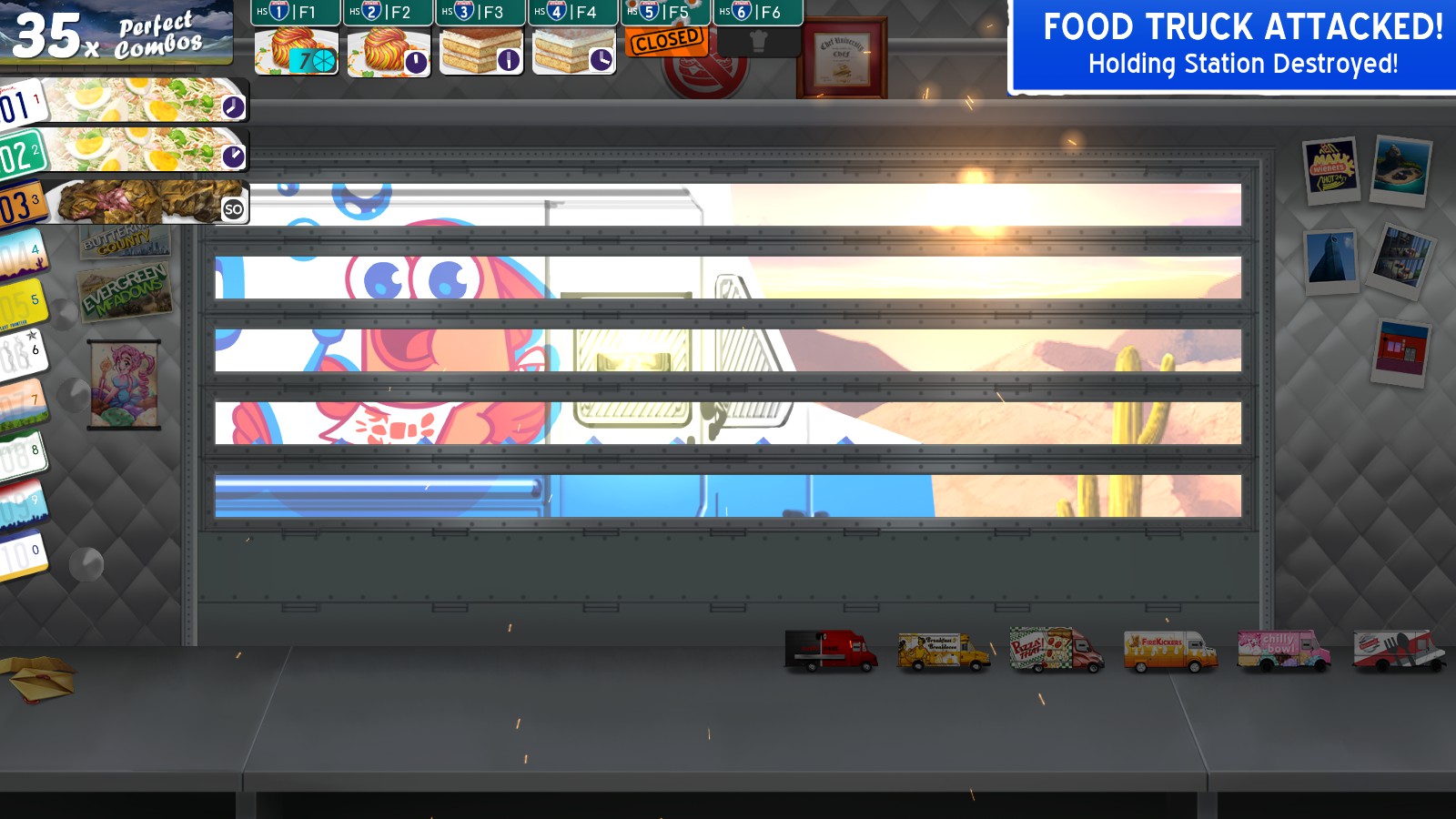 Once you get further into the game, it does get progressively harder. The minimum point requirements get higher, other food trucks will show up to rudely attack you (which will disable a holding station or mess with your orders), customers may be less patient than normal, multiple VIPs will order from the special order menu at stops, and even require you to have a minimum additional prep stations. Some you can adapt to, while others will probably force you to have a menu filled with food you’re too slow at assembling.

Luckily, if you just can’t keep up or just don’t want to deal with the stress this game brings on, you can activate Chill Mode. This mode gives customers unlimited patience and no food truck attacks. Food will still expire and burn, so you’re not off the hook for that, but it makes it easier to get through levels. The takeaway is only being able to achieve up to a silver medal which is a fair trade.

I know how tempting it is to just play every level on regular difficulty, aiming for the gold the first try on every level, but it gets tiring and you’ll burn yourself out. Especially when it’s a level that hits your weak points. Trust me, I had this mindset all the way until the third territory where I just had to tell myself to get on Chill Mode after spending an hour just on one level. Don’t hesitate on telling yourself the same. 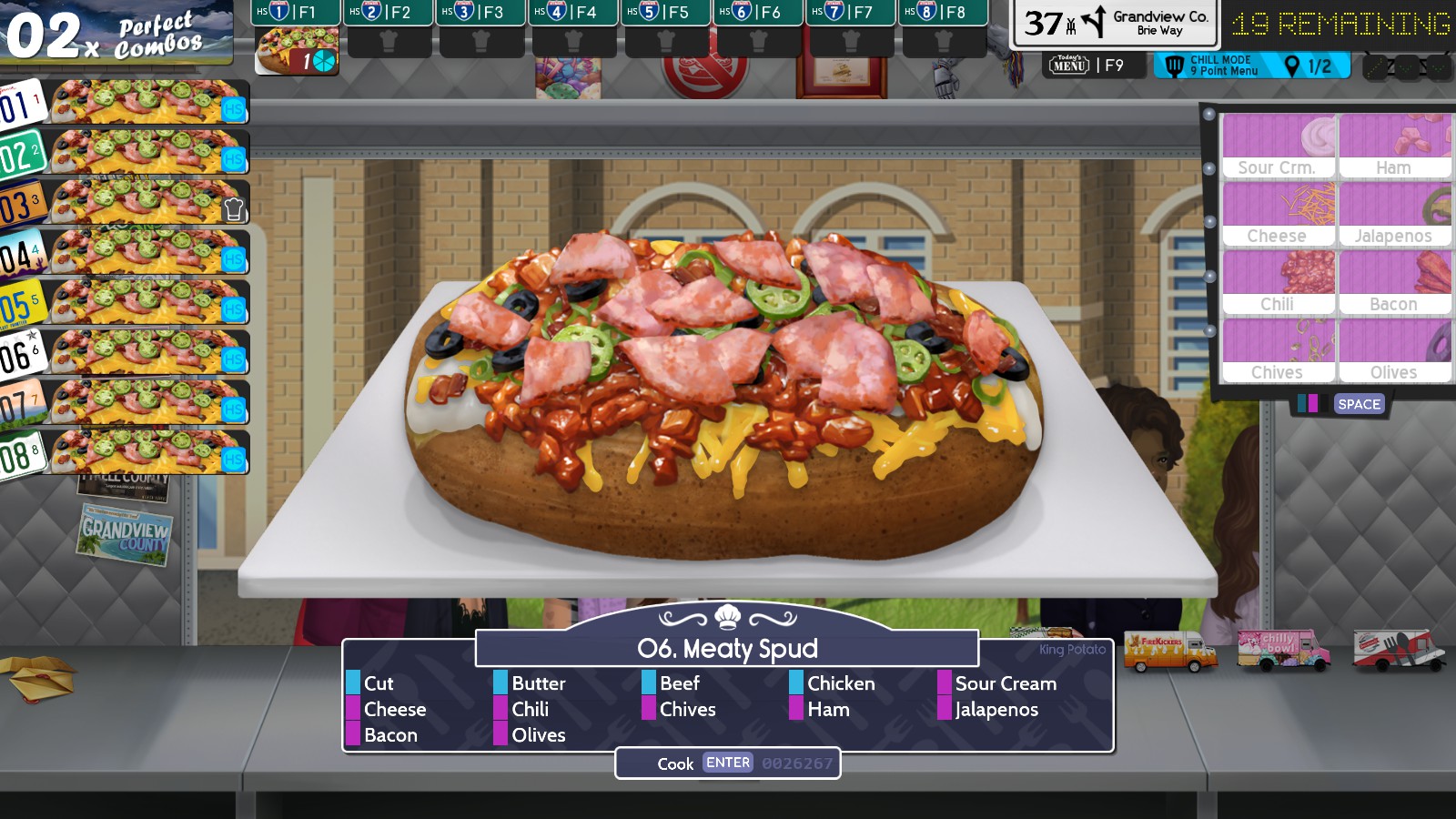 If you’re playing this on PC, you of course have the option to play with mouse and keyboard or with a controller of your choice. Either option is good, it all just depends on which control scheme you prefer. I mainly played with mouse and keyboard where you can either just press the keys, play with just a mouse, or combine the two. This does come with a downside of easily messing up if you forget that the button you need to press doesn’t match up to the first letter of the ingredient sometimes (like chicken is “K”) and the mouse does admittedly slow you down despite the easy “hold click to quickly load ingredients” strategy. With controller, you don’t have to remember so many buttons, just that you need to press a trigger button to be able to put down the ingredients and letting it go if you need to turn pages or get it cooking. Though, controller doesn’t come close to how fast a keyboard with be since it requires more button presses (especially for the stations where one press is multiple depending on what station you need to the relation of where you’re currently hovering over).

Also, if you’ll be playing on controller, make sure your controller type has configuration support enabled through Steam’s general controller settings or else the game won’t detect it. 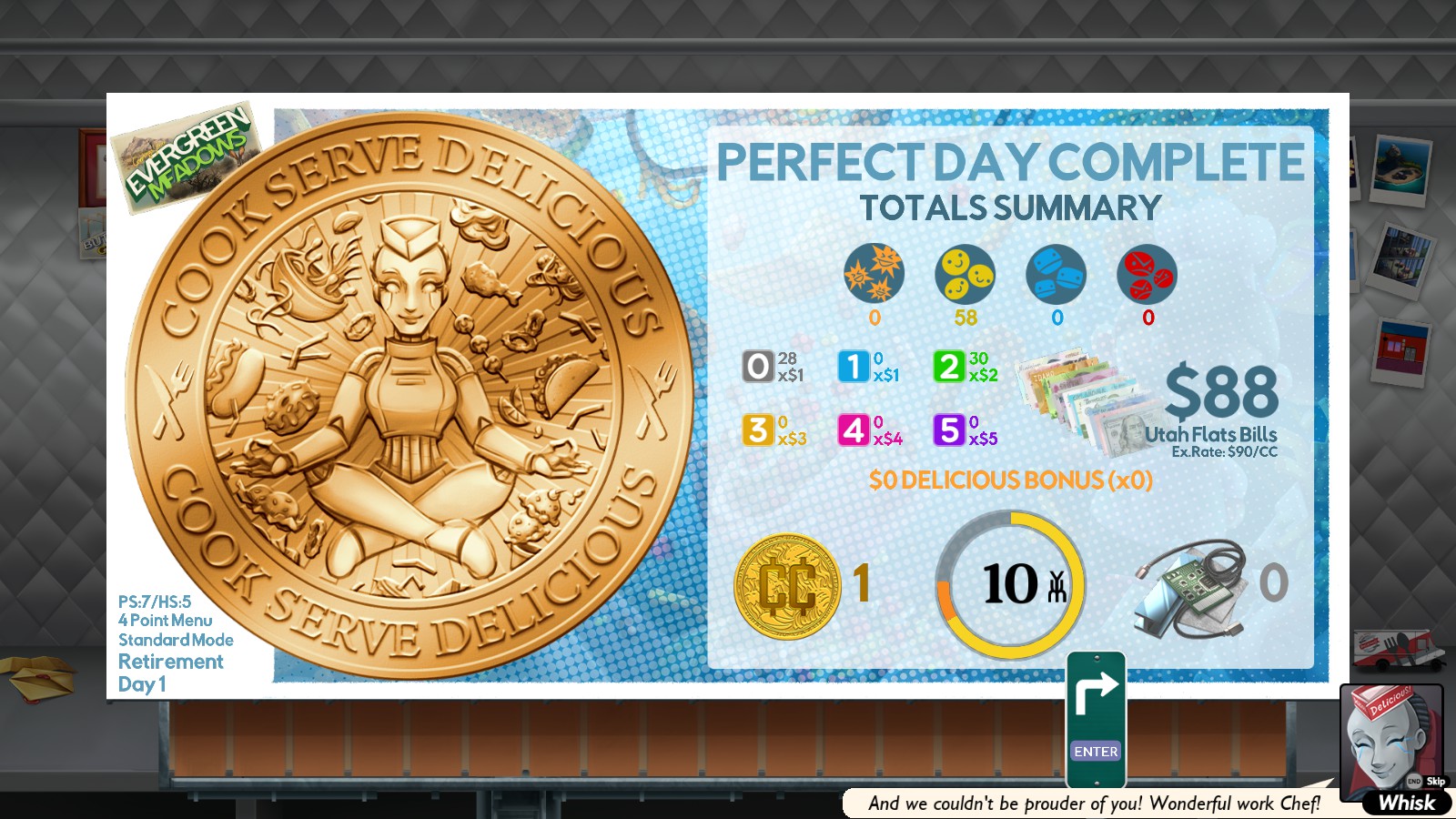 Cook, Serve, Delicious has come back better than ever to give you the stress of working in a restaurant (or food truck in this case) without actually working in one. The changes that were made were great and didn’t take away from the experience or the feeling of progressing. In fact, some additions even added to it like the auto-serve function. A part of me does miss the chores, but I do understand why as it would have messed with the pace. This also still has the same deliciously drawn food and an addicting “one more day” or “one more try” that before you know it will turn into a couple of hours.

If you’re looking for an addicting, fun game, one that will stay for quite some time, or just was disappointed over Cook, Serve, Delicious 2 and wondering if it’s worth picking up 3, I can safely say that yes, it’s worth picking this up. There are over 380 levels spread across 11 territories for you to enjoy and stress over. I’m barely past halfway through and I already poured 40 hours into this game. Just remember to not make it too hard on yourself right away and to eat before playing (or you’ll regret it once your stomach starts rumbling).