A rather unsatisfying and frustrating arcade racing game that doesn’t have any sense of progression to keep the player hooked, along with a dead online mode that’s practically worthless.

Hotshot Racing is an arcade-style racing game that honestly doesn’t have much to offer. Despite the controls simulating the feel of an arcade racing game accurately and the art style fitting the genre fairly well, there are some odd design choices that should’ve been revamped or at least looked into as the game would be releasing on Steam rather than on an actual arcade. 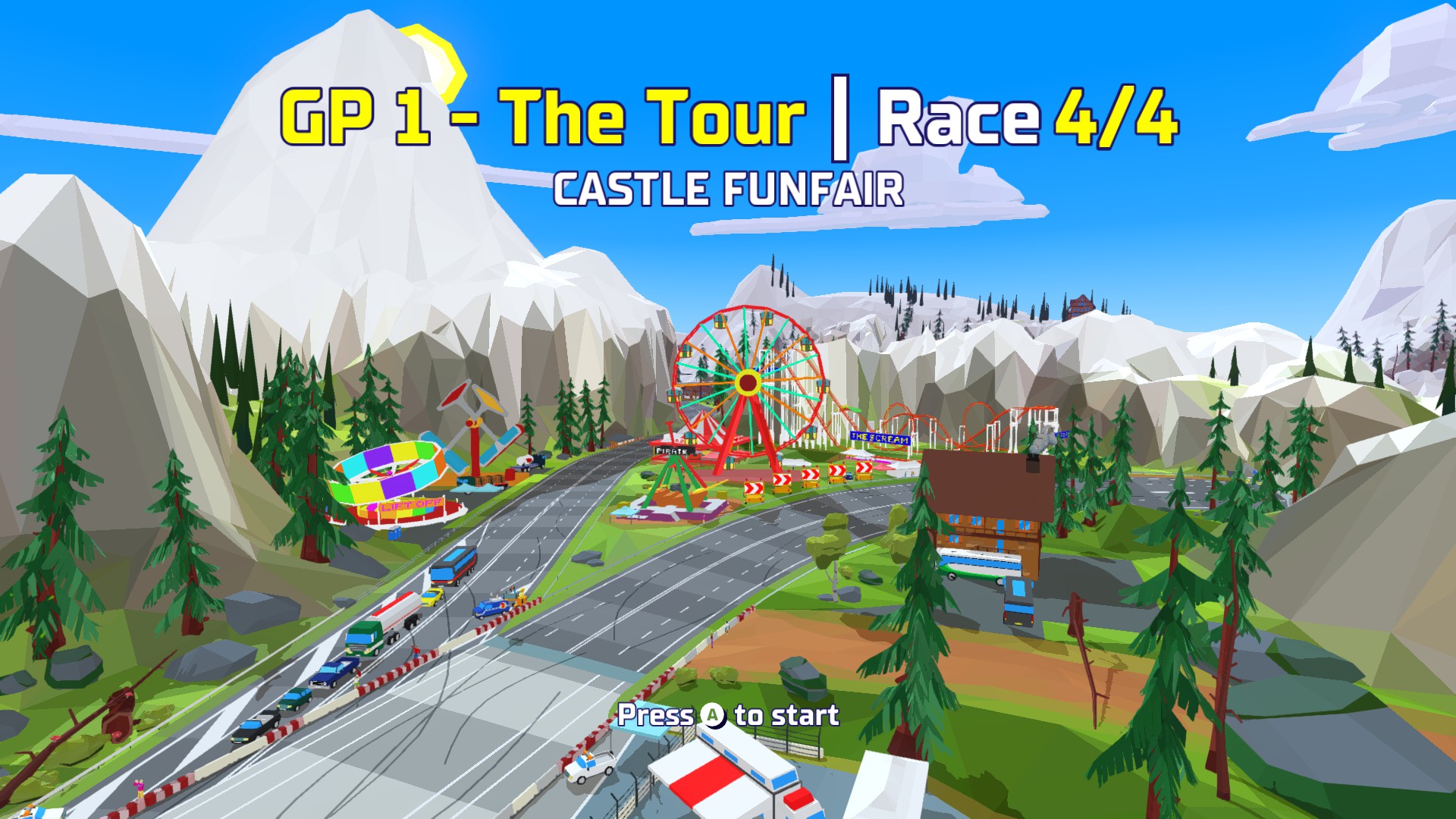 Put plain and simple, Hotshot Racing tries to simulate an arcade game and in that regard, it hits the nail on the head. The controls feel responsive as you race down the track at high speeds, drifting around corners whilst taking over cars and utilising your boost at just the right time to steal the victory at the end of the race. However, apart from this, there isn’t really much else to boast about for this game…

First off let’s discuss the tracks you’ll be racing on, you’ll be given 16 tracks in total all of which are only slightly different from one another and really aren’t interesting to race on whatsoever. It’s not like I was expecting Mario Kart styled tracks in this game, but something more than just a circle or oval with extra turns here and there would’ve made it more interesting. For some reason, I quite like the idea of tracks crossing over each other in one way or another so you can see other cars that are behind or in front of me, but Hotshot Racing doesn’t provide that at all. All the tracks are flat with only a couple of sharp turns that force you to drift hard to get around them smoothly.

It doesn’t feel like there was much thought creating these tracks either, there aren’t enough hard turns to warrant a drift every time but you’re basically forced to drift as much as you can because you need the boost. It also doesn’t help when the track has barely any turns that aren’t sharp enough and so you find yourself doing small drifts on long straights to fill up your boost. It’s not like boost isn’t necessary though, especially on the harder difficulties since all the other racers will be using boost as well and are practically always on your tail no matter how fast you go. 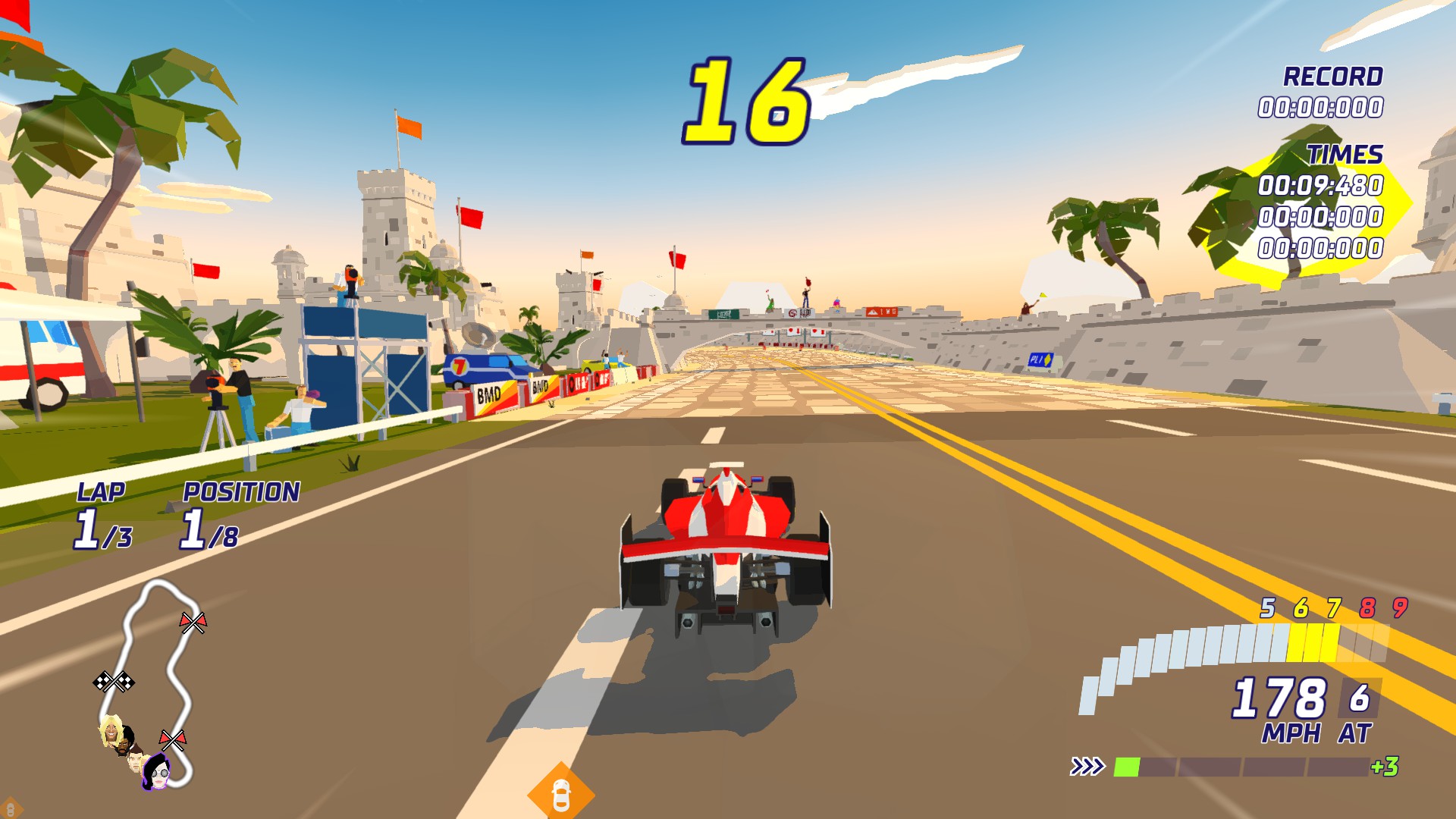 Winning these races aren’t that satisfying either, there’s no sense of progression since you win money and only use it to purchase cosmetic skins for your racer (who you barely ever see so what’s the point) or your cars. It would’ve been a better idea to at least upgrade your car with better stats or purchase new cars as that would encourage the player more to play through the Grand Prix on the harder difficulties and try to earn gold on them.

AI racers for some reason are extremely aggressive and love to bump into the back of you causing you to occasionally spin out of control. On the expert difficulty if you spin out of control and crash into the side of the track coming to a complete stop, then you’ve pretty much lost the race depending on how far into the track you are. I do remember that arcade-style racing games had aggressive AI with titles such as Burnout where you’d constantly be smashing into other cars and causing them to crash. But in Hotshot Racing, you’ll simply bump into them and they’ll lose a bit of speed before catching right back up to you. It’s practically impossible to secure first place during a track since, no matter how hard you try (even if you use all your boosts in one go), second and third place will be able to catch up with you and you’ll constantly be battling it out for first place.

Rubberbanding AI seems to be very aggressive also, even on the easiest difficulties you will find second and third place right behind you in seconds no matter how fast you go. It’s not much of a problem since you can easily steal the victory with a boost right before the finish line, however the rubberbanding on hard or expert is where it shows off the most and makes the game more unfair than challenging. Expert mode practically consists of being in the lead for a certain amount of time until the racer behind you bumps into your back and moves you forcibly to the left making you crash into the side rails, it’s not challenging it’s just unfair and frustrating. Sometimes you’ll be in the middle of 4 or 5 other racers all crashing into one another making it pretty difficult to escape from. You might consider that rubberbanding AI like this is part of the arcade experience and I would be all for that if I was playing this in an arcade, but I’m not. I’ve bought this game to play whenever I want to and don’t want to be frustrated with mechanics or something that tries to make me spend another £1 like an actual arcade machine. 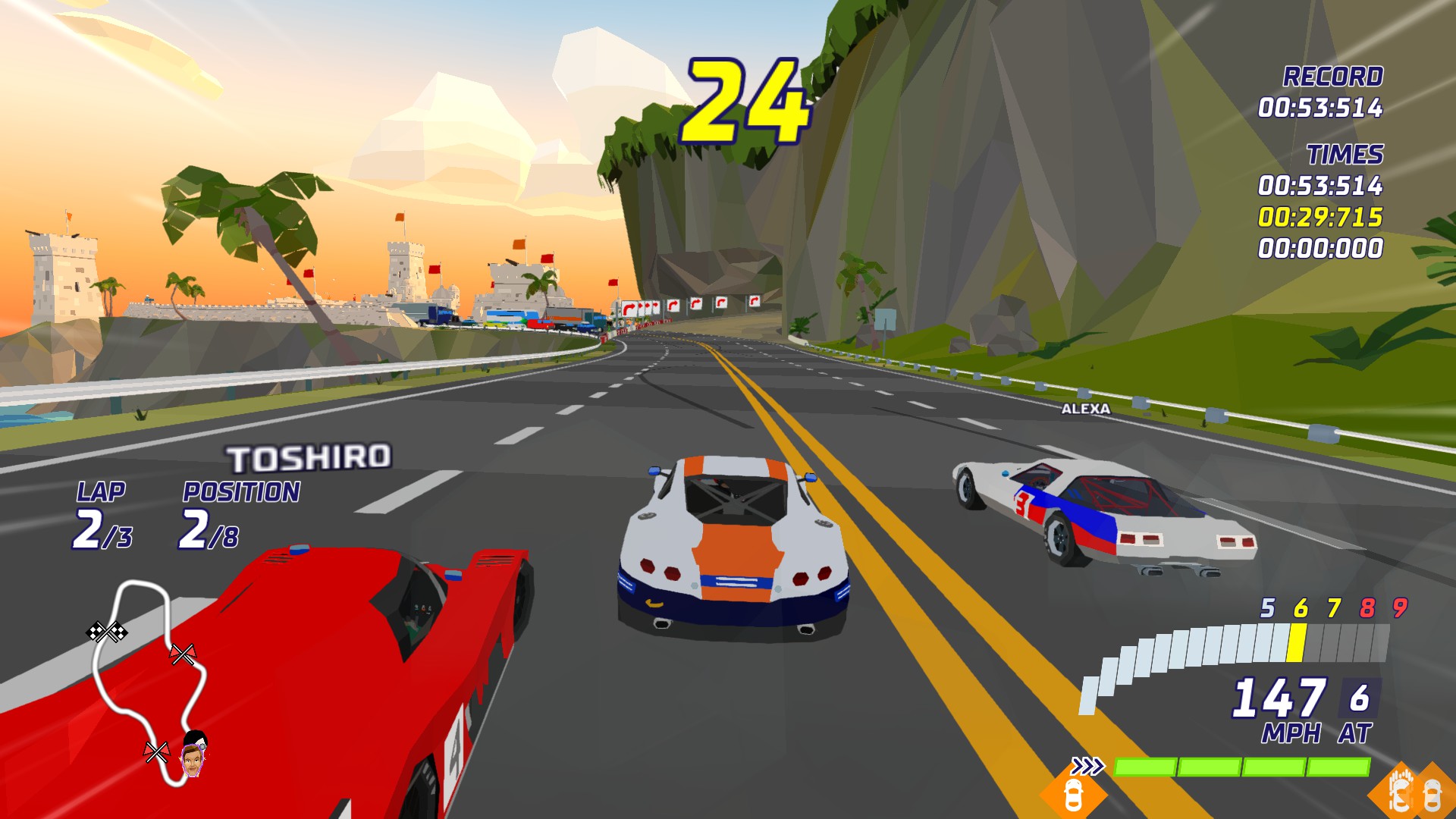 The one mode that could’ve brought this game out from the dirt was the online mode, however the online is dead in the water and as we all know, you can’t drive a car that’s submerged in water. I never really had much hope for finding anyone online even when I saw the trailer for this game since small games like this usually don’t have a community of online players, however there was still a small glimmer of hope that I held onto. It’s a shame because if there was an active community, then it would’ve gained at least some replay value as you raced against random people.

The fast soundtracks add to the intensity of each race, with the majority of each track having their own old school soundtrack. Similar to the graphics, the soundtrack has a distinctively nostalgic sound to it as does the announcer’s voice. However, their voice does get more annoying the longer that you play as you hear them talk every time you reach a checkpoint which is roughly every 20 – 30 seconds.

The polygon graphics fit the style of an old school arcade racing game very well, there is at least some variation in the places that you race and give off a slight sense of nostalgia. However, with such a shortlist of tracks, you would’ve thought that you wouldn’t see a repeat of structures you’ve seen before. Unfortunately, if you play through the 4 Grand Prixs then you’ll certainly see some familiar structures which could’ve been replaced with something different. 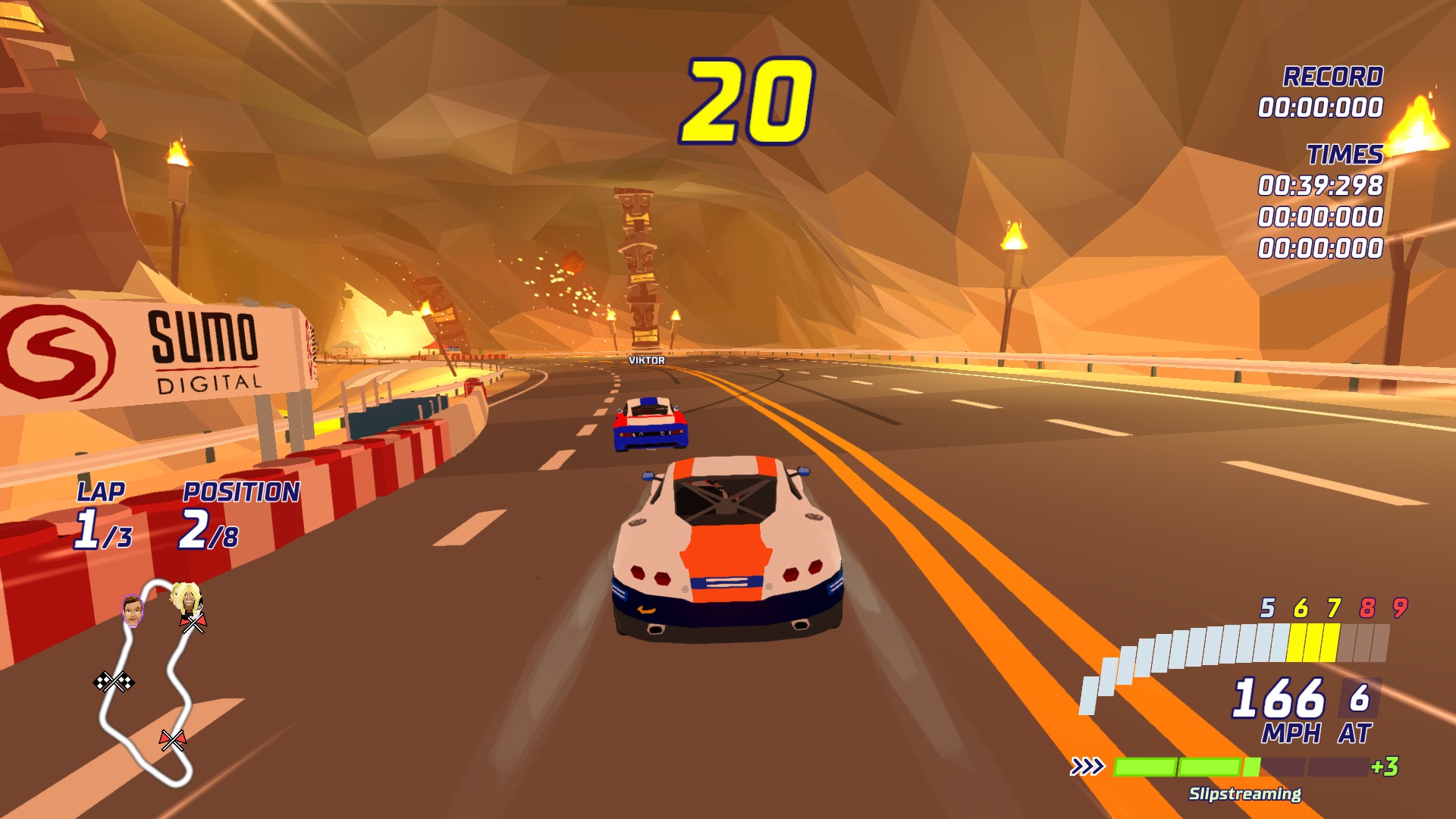 Hotshot Racing is nothing more than what it says on the packet, a simple arcade racing game. All the tracks are boring and dull with no creativity put into them, the AI is unnecessarily aggressive with extreme rubberbanding difficulty and you’ll be lucky to get 5 hours out of this game if you want to complete all 4 Grand Prixs on every difficulty. Overall, this game lacks content and for the asking price, you’d have to wait for a massive sale before even considering to purchase