Crown Trick is a turn-based rogue-lite that tries its hardest to be something different, but ultimately falls flat and gets repetitive very quickly due to simplistic combat that rarely changes how you play the game. Despite the appealing art style and the somewhat unique combat mechanics, as a rogue-lite it misses the mark in a lot of places and consequently suffers from low replay value that is vital in this genre.

Crown Trick uses turn-based combat on a grid where you take it in turns to move and attack enemies in the room. It’s rather simplistic and therefore lacks the strategy of what you might’ve expected from a grid turn-based combat system. The only unique mechanic Crown Trick has to offer is the ability to stun (known as breaking) enemies after attacking them a number of times depending on the enemy. You’ll constantly be breaking every enemy you encounter to render them stunned before spamming attacks to kill them, this makes each fight feel exactly the same and hinders the replay value of this game severely.

Despite this, there is some strategy involved in the combat using spells and items to attack as well as carefully planned movement to ensure you don’t take damage. Enemy attacks are portrayed on the ground informing you on how many turns before they attack, though on the rare occasion of specific bosses they won’t display this information and instantly attack. This is when teleporting (known as blinking) comes into play since you’ll certainly find yourself in a situation where you can’t avoid the damage by moving 1 tile away. You are however limited with how many times you can use blink as you are given 3 uses at the start of each room, though can earn more uses if you can keep up your combo by breaking enemies in a row.

As you progress you’ll find different types of weapons that have different ranges, from guns, gauntlets, axes, swords etc. Each type has a different amount of range and seemed to be more necessary than the damage of the weapon in the early stages. Axes can be swung around hitting enemies 9 tiles around you, guns to shoot from 3 tiles in front of you, swords can swing 3 tiles in front of you and so on. You can also use spells from defeating mini-bosses, these are more interesting than the weapons you’ll equip as these spells can do elemental damage and are usually highly damaging. 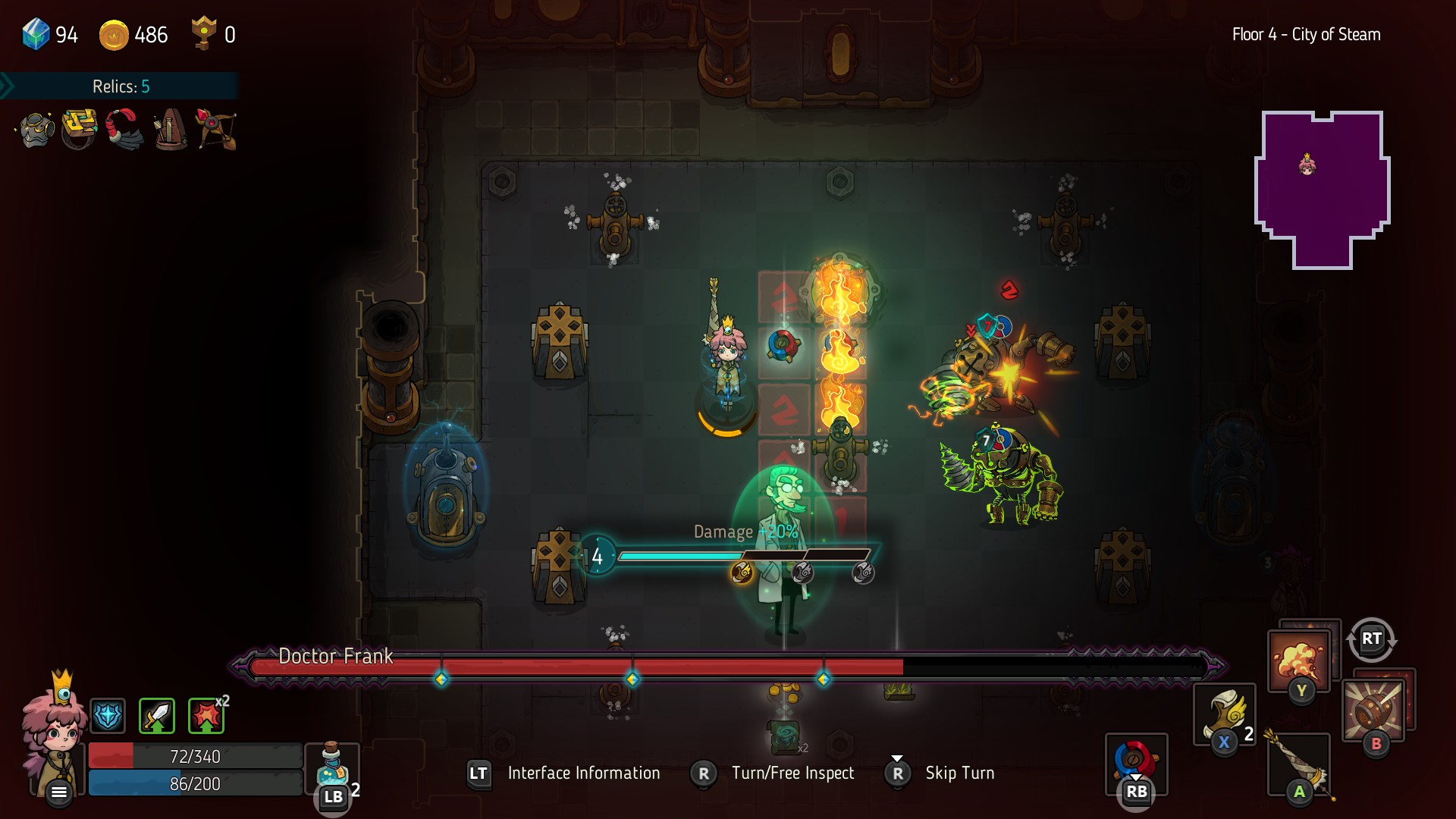 Bosses that you encounter at the end of every floor require at least a bit of strategy to defeat, using the spells that you’ve acquired are almost necessary in order to deal with them effectively. Some of the bosses feel unbalanced however, being able to teleport around the room and spawn in enemies really can drag out the battle to last way longer than it should. The variety of bosses is also lacking, so you’ll almost always fight the same boss over and over again when you go through multiple runs.

Arguably, you could say that Crown Trick relies too much on spells to defeat specific bosses that can heal themselves. It doesn’t feel balanced as your weapons are usually inferior to your spells in terms of damage and the fact you constantly run out of MP really does make it frustrating. To gain MP you need to lower the bosses health to a certain point, but if you’ve already run out of MP and are just using your regular weapon then you’ve pretty much already lost. I’ve only encountered one boss like this, but the fact that this boss is in the game makes it feel so unbalanced.

The varied gameplay in Crown Trick definitely boils down to the large arsenal of weapons and spells you equip. The rooms do seem to lack variety, despite going through the same 4 floors every time, you’ll come across familiar rooms rather quickly. The random nature of Crown Trick is clearly more focused on weapon variety rather than room variety which takes a toll on the replay value which is more than essential in any rogue-lite title.

Upgrades that you can purchase at the end of every run feel extremely underwhelming, uninteresting and only slightly helpful. From purchasing permanent stat upgrades to being able to hold more shards (the currency you use to purchase upgrades) at the start of every run, to holding more gold at the start of every run, have more uses for your potion, begin with a key at the start of your run etc. It also doesn’t help that these upgrades can be extremely expensive later down the upgrade tree and never feels like it isn’t worth the time. A lot more could’ve been done with the upgrades, just to be more interesting and encourage the player to purchase upgrades or save for interesting ones that would at least slightly change the way you fight. 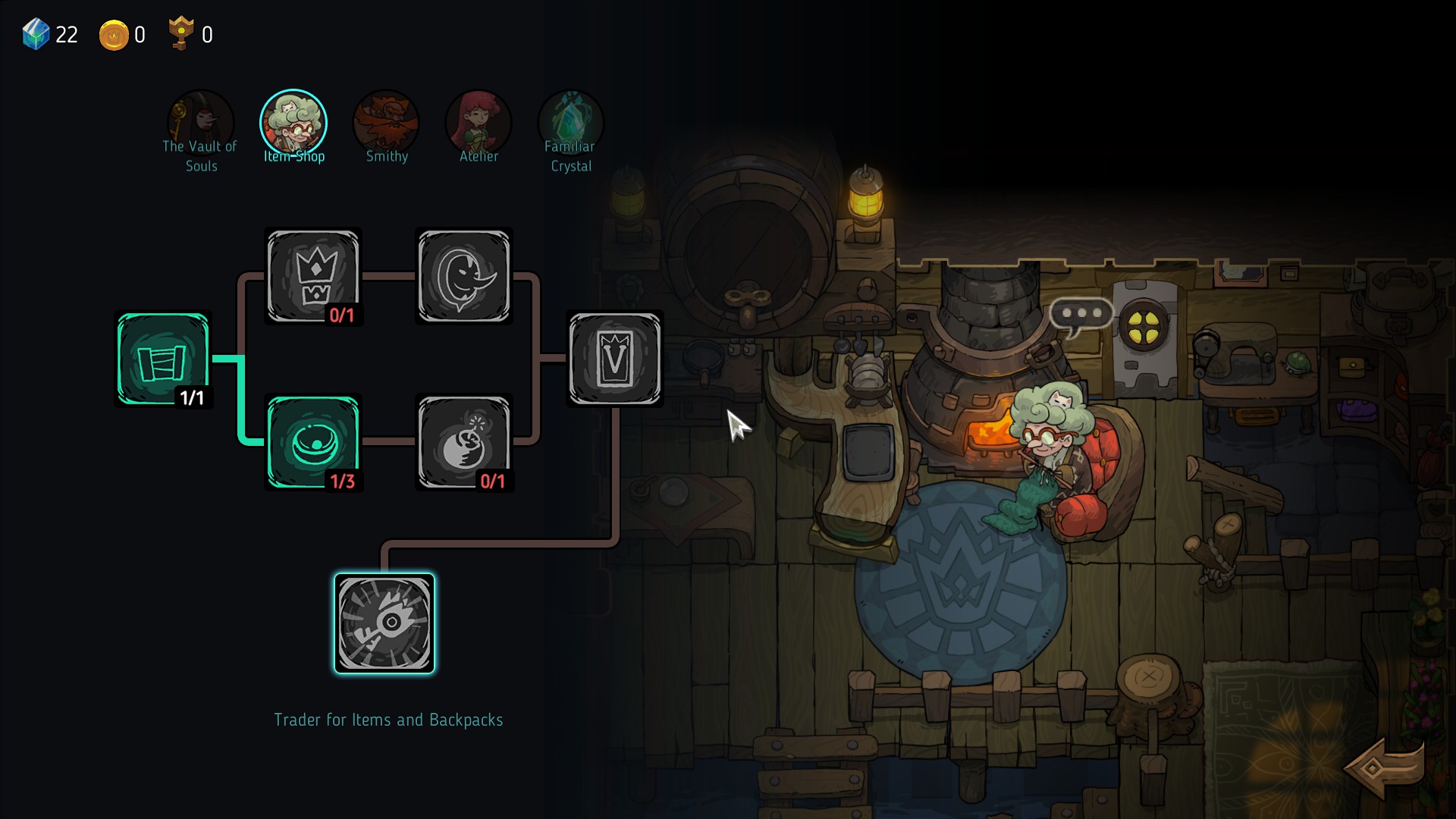 Unlocking new weapons and relics is as simple as finding blueprints whilst in dungeons and finishing the floor. Though I never really remembered what I had unlocked, it would’ve been nice to have the weapon to try out at the start of the next run or something just to test it out. Relics can be collected and bought in shops which give you additional benefits that will be somewhat game changing, however the majority of them rely too much on RNG to be useful, whilst others for some reason have negative effects that always seemed to outweigh the benefit.

The art style of Crown Trick is very appealing and eye catching with bright and vivid environments used in the different areas to make them feel distinctly different from one another. The enemies are appealing with associated colours making it easy to distinguish what elemental spells they’ll have to attack and fit in perfectly with the areas you explore. However, there does seem to be a clear lack of detail in the rooms that you explore with barely anything in the rooms besides a few barrels and crates scattered around the empty rooms. consequently this makes each of them feel practically the same with the walls just placed differently to create different looking rooms. This probably also equates with the lack of variety for the rooms since there isn’t much going on in each room and they all feel somewhat empty to explore. 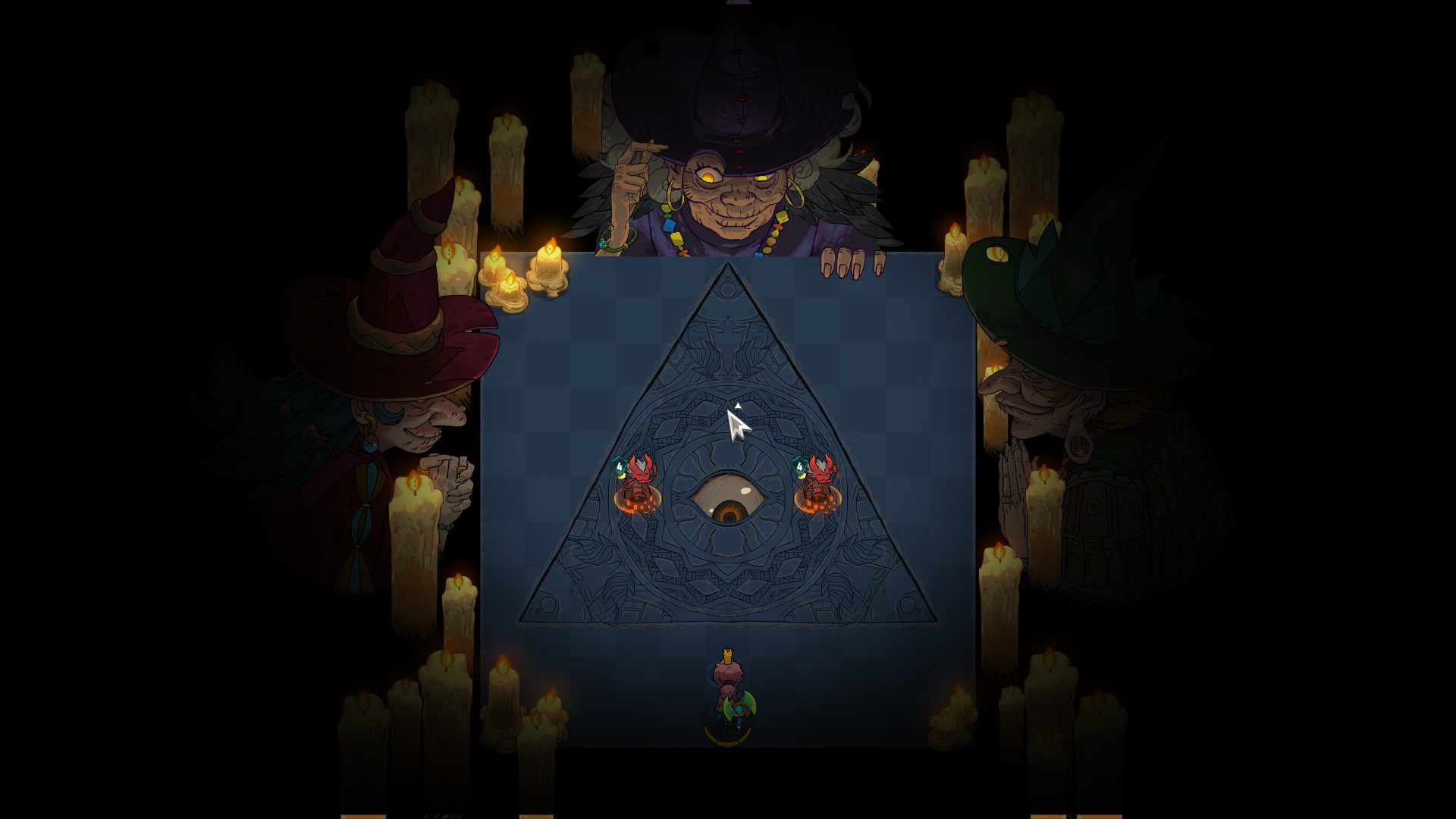 The soundtrack is very simplistic and never changes unless you’re going up against a mini boss or the final boss of the floor, there seems to be a lack of variety overall as there is only a single soundtrack for each floor. Just because the soundtrack is simple doesn’t necessarily make it bad, it’s fine for what it is, but there is very clearly a lack of atmosphere or tension as you arrive into new areas. The environments don’t set the atmosphere all that much from the lack of detail and the soundtrack doesn’t really try to set it up either, it isn’t a huge deal breaker but it was noticeable at times.

Crown Trick has some interesting concepts to run with but it’s poorly executed and feels like a lackluster rogue-lite. The art style is visually appealing but the combat suffers tremendously with its simplicity and limits you to the point of frustration sometimes. It becomes overly boring and repetitive when traversing the dungeons and is only slightly compelling when fighting some bosses but never feels truly satisfying. There are a lot of better Rogue-lites to choose from than Crown Trick that offer a more satisfying and enjoyable experience.