Snow, snow, snow, and yep more snow. Where the hell did I come from?

To be honest, I played The Long Dark over four years ago and was actually one of my first five purchases. I eventually stopped, of course, though that was before character models were put in and before the story mode. So what else than to start off spooky October by the fear of being all alone in the wilderness during winter with barely any hope of surviving and returning to see what the game now has to offer. For this, I’ll first go through survival as it will be during sandbox before going into story mode.

The main selling point to The Long Dark is its survival mode. This will basically set you somewhere in the world (you can choose which region if you want) with some supplies. The difficulty you’ll have will depend which Experience you choose out of four which will mess with spawns, resources, how hostile the world will be, the possible time/area you’ll start at, how fast item conditions decay, and how long it takes for your condition to regenerate. Or you can even play a custom game to tweak almost everything or put in a custom code someone shared online. 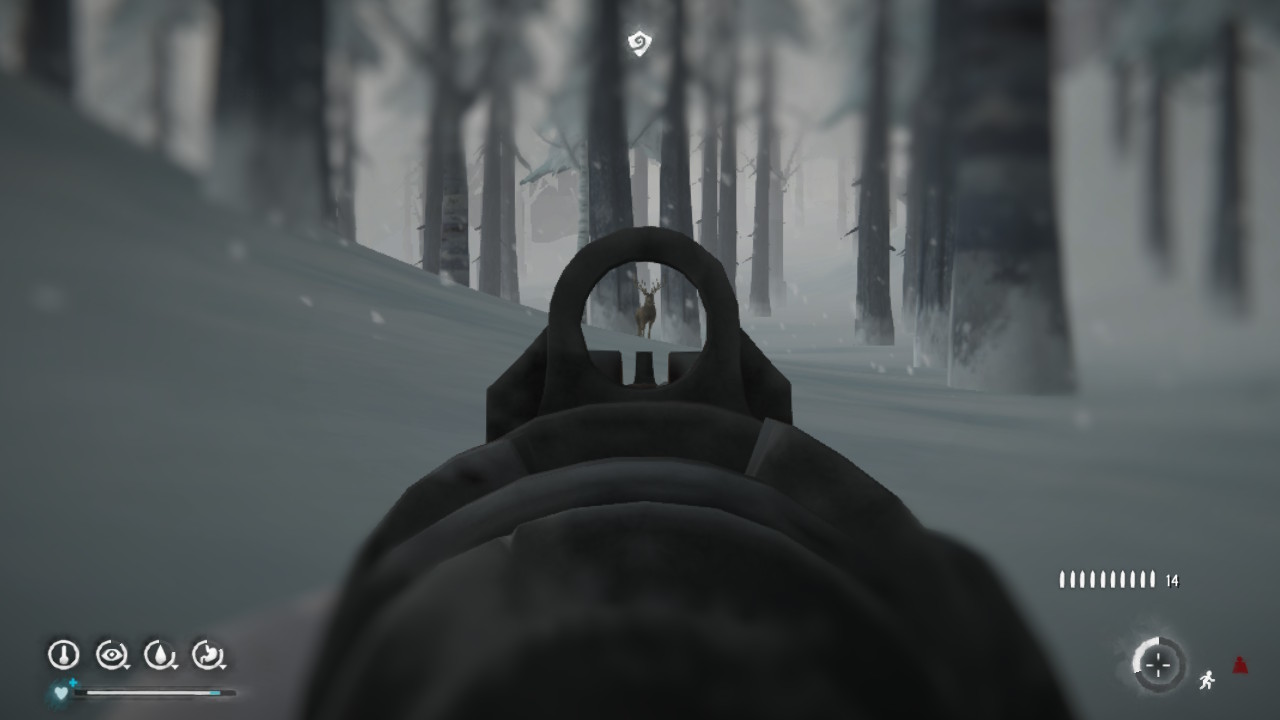 Once you get into it, you’ll be all alone. Tasked with just staying alive, and any goals you set out for yourself to accomplish, you’ll be able to travel anywhere and explore and building you come across to gather supplies, huddle for warmth, hope for a place to make a fire to cook/heat up food and melt snow, or just to take shelter so you’re safe if any weather or predators comes knocking. Also, it’s best to always manage your inventory as the vast majority of things you find weighs you down. Some not so much, but trust me it adds up quick and being over-encumbered will make you walk slower, not able to run, and at risk at spraining something.

On that note, if you do become injured, you’ll need to treat it. Injuries aren’t equal, so a sprain will just limit what you can do rather than constantly draining your health like food poisoning or bleeding. Luckily, you will find medical supplies, bandages are easy to make, and you can use a natural remedy. Survival has permadeath, so if you die for any reason you won’t be able to reload your save back up.

Survival also has a skill system for the repeatable actions you can do. Normally, you just have the base stats, but as you do more your characters skill at say making a fire will make it easier to start one during late-game and make it last longer. This extends to weapon handling, harvesting carcasses, fishing, other crafting, and repairing.

If you want a specified goal where failing means you need to start over and will give you an extra challenge, there are seven Challenges for you to choose from. There are seven challenges all varying in difficulty from just having to find specific locations and surviving in each for a couple days to starting out being mauled and continually stalked. 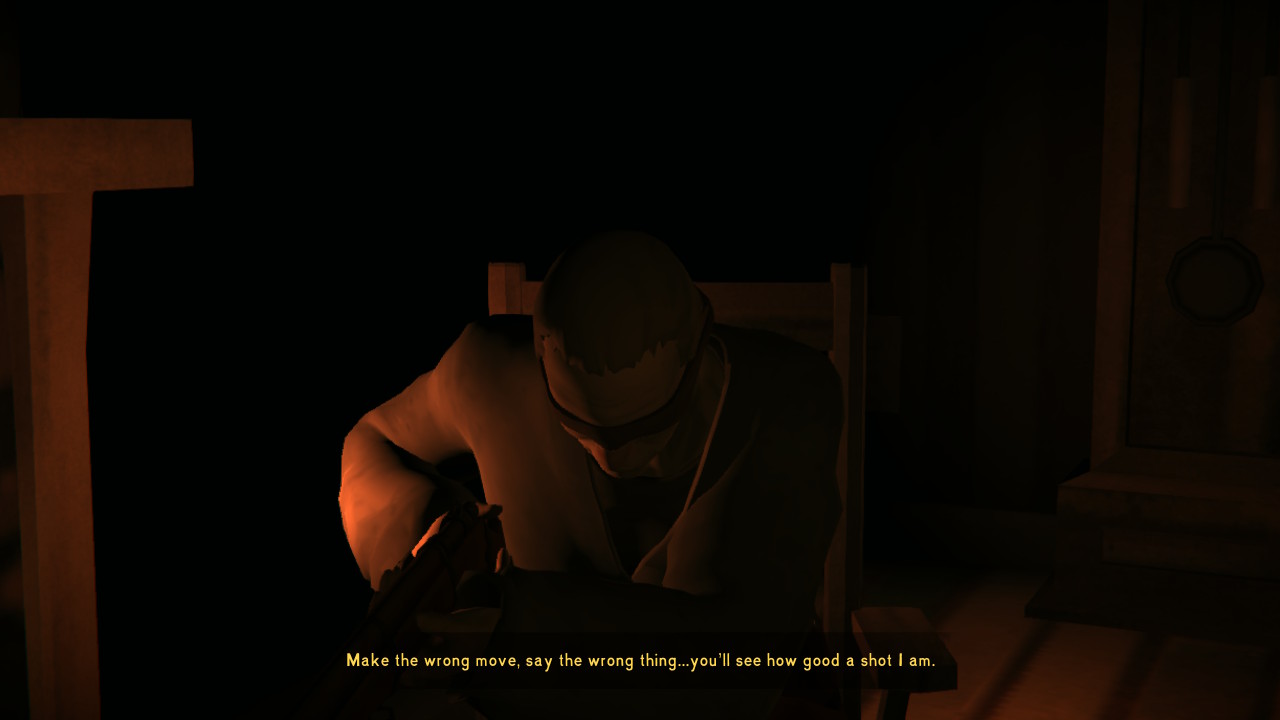 For those that are more interested in a survival game having a story, rather than just being a sandbox, The Long Dark has a story mode called Wintermute. Wintermute follows a pilot named Will Mackenzie who is approached by his ex-wife Dr Astrid Greenwood requesting him to fly her and her mysterious case to a remote location asap. He agrees despite the weather, but it turns out what they had to worry about was a mysterious geomagnetic event that causes them to crash. Both of them become separated, with Will having the case on his end, so they both will need to survive long enough to reunite. The first two episodes have you control Will right after the crash happens. You’ll be traveling to a mostly abandoned town named Milton, helping the old woman there and hear the stories she and other characters will tell, and figure out what happened to Astrid in the first episode. The second episode will have you say hello to an old friend, a bear nicknamed Old Bear. This is basically like The Hunted challenge but Old Bear attacks a trapper which you’ll need to help patch up and repair his radio. However, Old Bear catches on to what you’re doing and plans to hunt you for the time being. Episode 2 also introduces the aurora which if it’s in the sky will slightly power electronics and make predators more aggressive.

Going into Episode 3 will jump us into Astrid who has come into her own set of problems in Pleasant Valley as she’s rescued by a lone woman, travel to help those in town and survivors of a different plane crash, and basically do the Whiteout challenge by gathering enough supplies to last a blizzard. Episode 3 introduces timberwolves which I both love and hate. Timberwolves do require a different strategy from wolves or bears as they aren’t easily scared away and hunt in packs. Usually one will try to hold your attention while the others will rush to nip at you. The only way to stop them is to deplete their morale meter by shooting, killing, or throwing stuff at them. You can hide in a building or car, but they stick around for a couple hours waiting. That said, they’re still very aggressive on the easiest mode and are just very annoying especially when they attack when you need to carry survivors (which attributed to me becoming burnt out during Chapter 3). 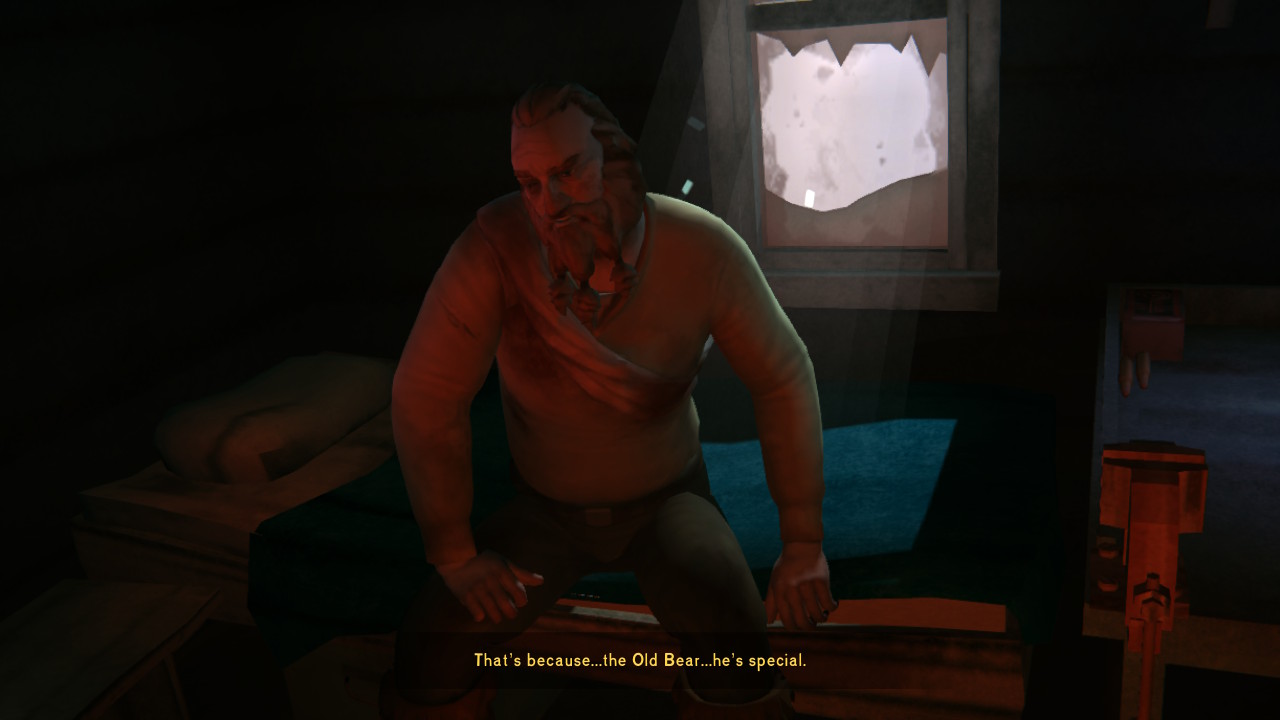 In Wintermute, you’ll be talking to the characters that inhabit the area, which will let you choose between dialogue options (expect in Episode 3 where you’re given a choice between choosing one choice) which will give you more information on what went on or just skip it all to get right into the main quest. To fill the world up more, there are also side-quests that are activated by finding notes/books as you’re scavenging for supplies.

Apart from obviously having a story, Wintermute also takes away the ability to level up skills, but you do get a map. Thank goodness as even if I did know the regions like the back of my hand, I’ll still get lost. The map will show where you need to go to progress the episode as well as where you need to go to complete the side quests. Though, you can’t exactly take a direct path there as the terrain will block your way.

I found Wintermute pretty enjoyable. Yah the writing could be better, it does rely on fetching items, and Episode 3 is a spike in difficulty, but I enjoyed it. I liked interacting with the characters, helping them out in their time of need, and learning just a little bit of who they are. I certainly did not want to leave them behind, especially Grey Mother from Episode 1, but I must. However, Wintermute isn’t complete yet. There are still two episodes left to be released. If you’re someone that picks up episodic games when every episode is out, this is going to be a long wait. Episode four has been delayed (understandably) and episode five will most likely come along a year later at the very least. 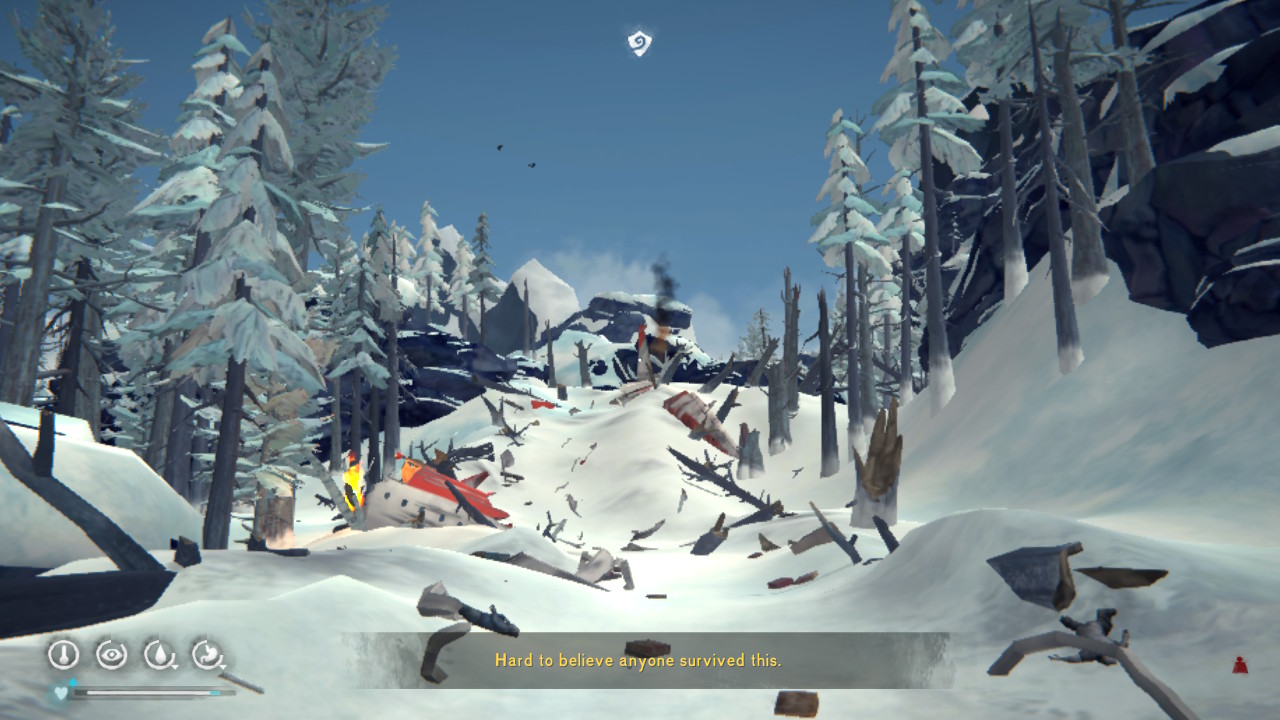 Now for the question that most are looking for: how does it perform on the Switch? Pretty well actually! Of course the graphics won’t live up to how they will be on PC, which honestly this should be expected, but it still telegraphs the information you need. Things will flicker when they’re a certain distance away and some words/letters are blurred, but it’s fine. The only other differences I could tell was that the cave that leads you from Episode 1 to 2 needs a loading screen and is harder to spot as it’s a little notch in the mountain side rather than a cave opening. Apart from when you open the game, the loading is also not that bad. In terms of performance, I didn’t notice any stuttering throughout and the only time it did was to autosave. I did run into two crashes, both during Episode 2’s Lake Gunshots side quest when talking to the Forest Talker after getting what he wanted, so watch out for that. I suspect this is due to the game signaling for an autosave without realizing that I wasn’t fully out of the conversation yet.

You really just have to get used to aiming so you can defend yourself and hunt. This port does feature gyro controls which are defaulted only when aiming, but you can decide to have it on all the time. Just make sure to mess with your movement sensitivity first. Though, if you’re playing on handheld with the joycons detached, I recommend disabling this as I was only able to aim up and down. In addition, this also comes with other accessibility options like only having to click rather than hold to search, an option to auto walk (hopefully you have no drift on the left stick), and only needing to hold during struggles rather than button mashing. 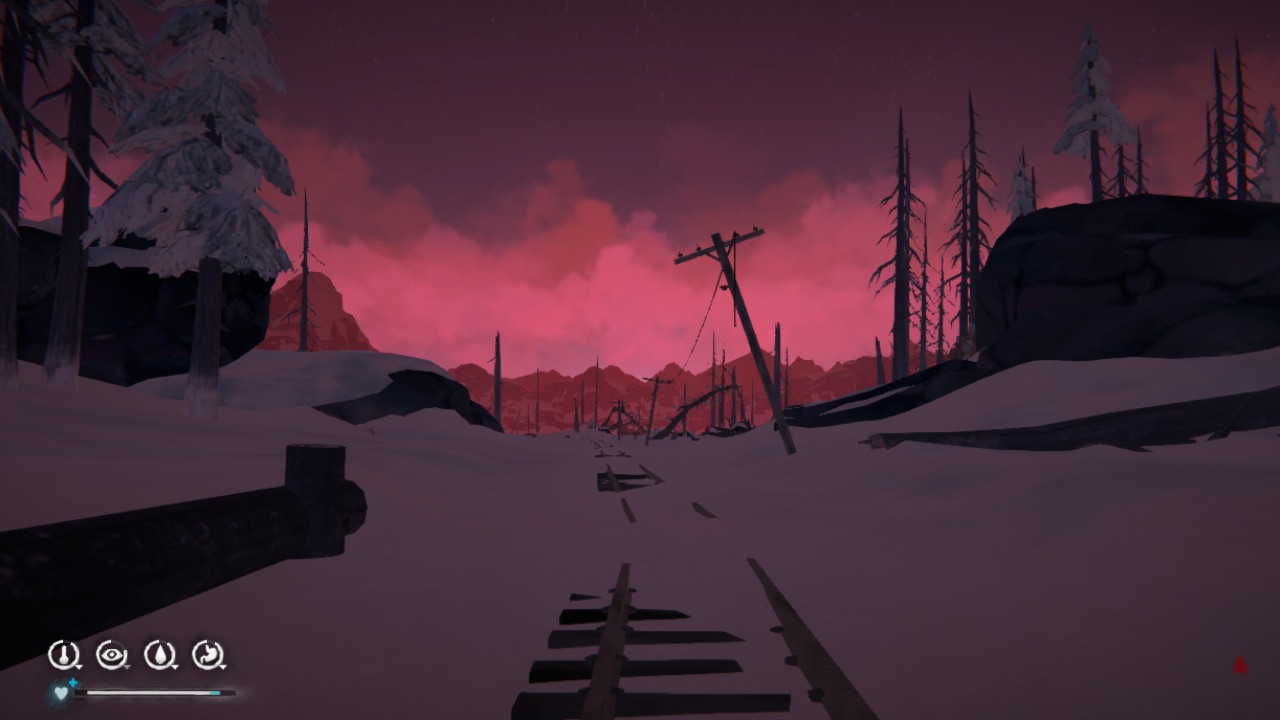 If you’ve been dying for a game that tasks you with surviving as long as you can in Canada’s frozen wilderness after a geomagnetic disaster and fine with silent moments, The Long Dark will satisfy that urge. Apart from the possibility of dying by wolves, bears, starvation, dehydration, hypothermia, and other illnesses this is pretty relaxing. If you’re also someone that would want this game on the go, whether you’re someone that already played on other platforms or not, this Switch port is pretty good. Whether or not you’re picking this up just for sandbox or just for the story mode, it’s worth picking this up either way and even more so for both aspects.

On a final note, kudos to the sound design. It even convinced my dog that the wolf in the game was real.