REVIEW: We Should Talk

The sentence everyone dreads

We Should Talk puts you in the shoes of an unnamed woman and takes place entirely in a bar that she seems to frequent regularly. There are four characters that you’ll talk to at least once during the 15-20 minute play time. You’ll first talk to Steph, the bartender and owner of the bar, to order your drink, talk about your girlfriend a bit, and maybe try to flirt. You’ll then be able to choose who you talk to first, someone you know and a stranger. That someone you knew (Dante) happens to be your ex who you’ll be able to see what he’s been doing, lightly touch on your past relationship, and maybe be flirty. While the stranger (Jimmy) go stood up and tried to pick you up instead, which you can reciprocate, see him as a total douche, or try to befriend him.

Between each conversation, you’ll get a text from Samantha, your girlfriend. It turns out that she’s at home and expected you to be home too, or at least on your way. However, you decided that going to a bar was a better option. Throughout the game, you’ll choose whether or not you’re someone that treats their significant other well, passive-aggressively, or terribly as Sam tries to not let her insecurities or anxiety about you leaving her consume her, talk about her troubles, and determine whether your relationship is actually worth continuing. 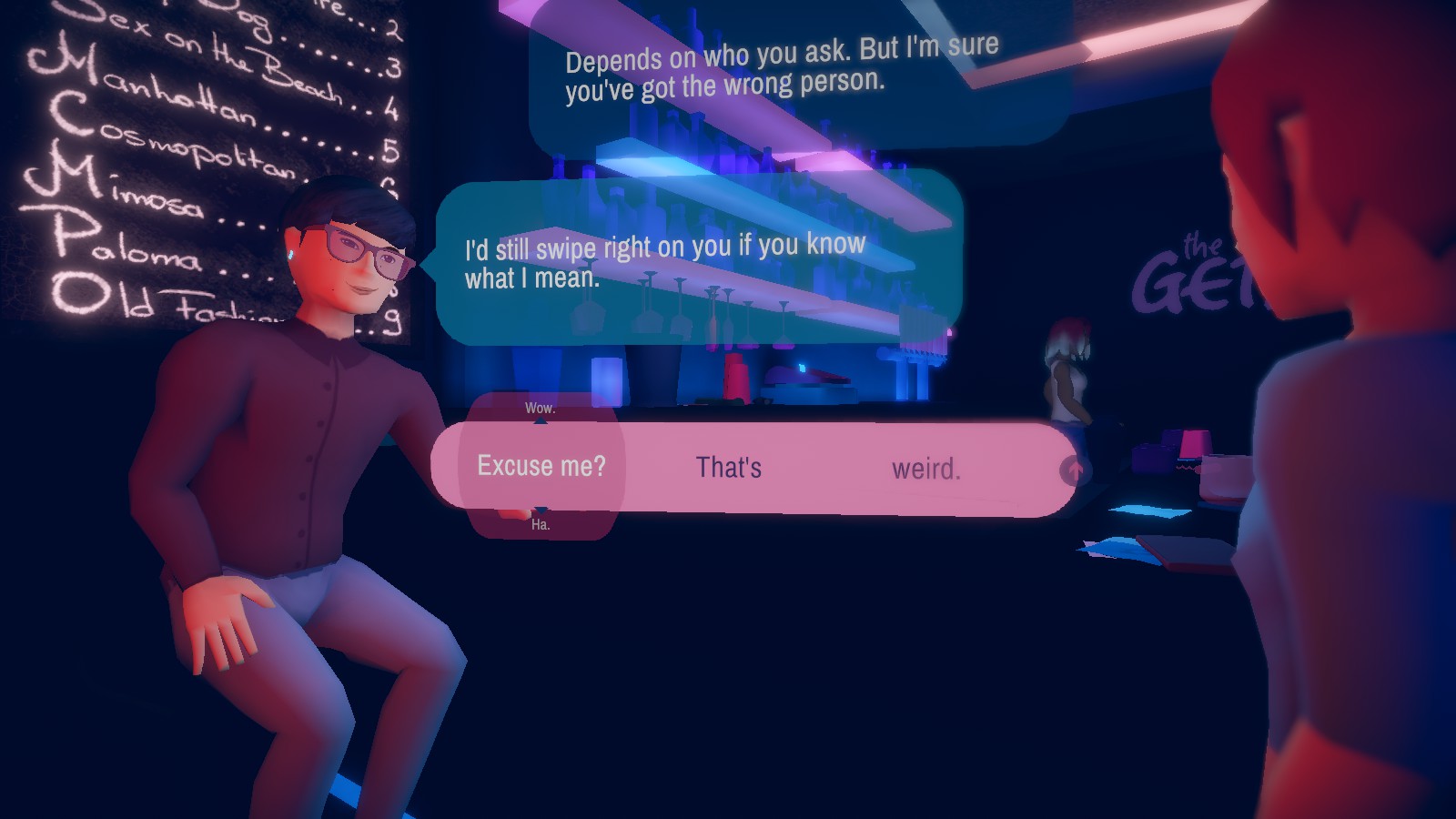 This does introduce a new way to choose your dialogue called the sentence spinner. Rather than having a system where you choose between different sentences, you instead construct what you’ll be saying. At least two parts of your dialogue will give you a choice to choose between multiple words or phrases. This definitely does let you be in control of how your sentence is taken, as you don’t have the problem of it actually be said in a different tone you interpreted it as. Though, I’m not really sure how well this system will be for future games, especially ones that would be significantly longer than 15 minutes. You really have to make sure each piece makes sense with the others (and from an AMA I found, was a challenge) as well as having other character’s dialogue in response to you make sense. In term of responses, there wasn’t really any difference if you changed your wording (even if it didn’t make sense contextually sometimes) unless you entered something specific to trigger a new response/dialogue path.

Though, I did have a pet peeve that the text messages didn’t have any capitalization. I expect spelling errors, as who hasn’t accidentally left out a letter or used the wrong form due to typing too fast, or shortened words,m but phones auto-capitalize letters for you.

While this does feature nine different endings, it just became too boring after a couple of tries. You’ll have to wait through all the dialogue again (even with the fasted text setting) and hope that you picked the right combination of words and the right sequence to unlock new dialogue (or the set of dialogue you need to get to) and hopefully a different ending. I got 4 different endings, with 6 more playthroughs trying to get different endings and achievements for getting to a new conversation topic before I stopped. 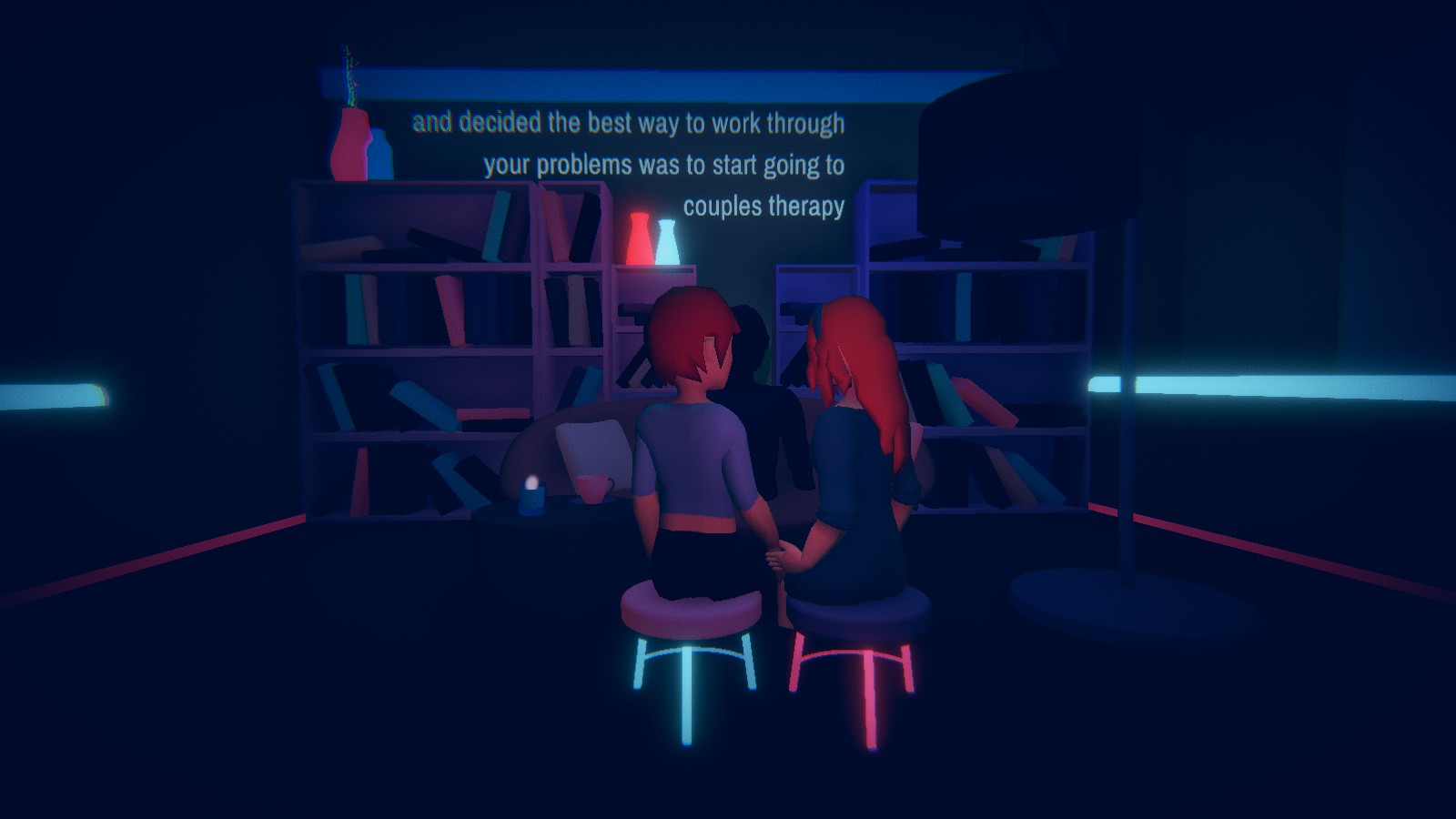 This may do to how the endings aren’t based on checking which route you took with each conversation, but the tone of your responses. I’m not sure this worked well though as you can get an ending where you befriended Jimmy even when you told him off and demanded him to leave you alone. I also find it weird that there wasn’t a different ending if you actively flirted with one or all of the characters you meet at the bar (whether it has Sam finding out what you were doing that night, or have you being a serial flirter/cheater that Sam finds out later on).

I will say though, that I did like the music, I didn’t mind the art style that was used, and it did ooze the awkwardness some conversations can be and making you feel bad for neglecting Sam (though I often do feel bad whenever I purposefully be a jerk to well-meaning characters). This also shows how your tone does dictate conversations and how first impressions go (especially with Jimmy). 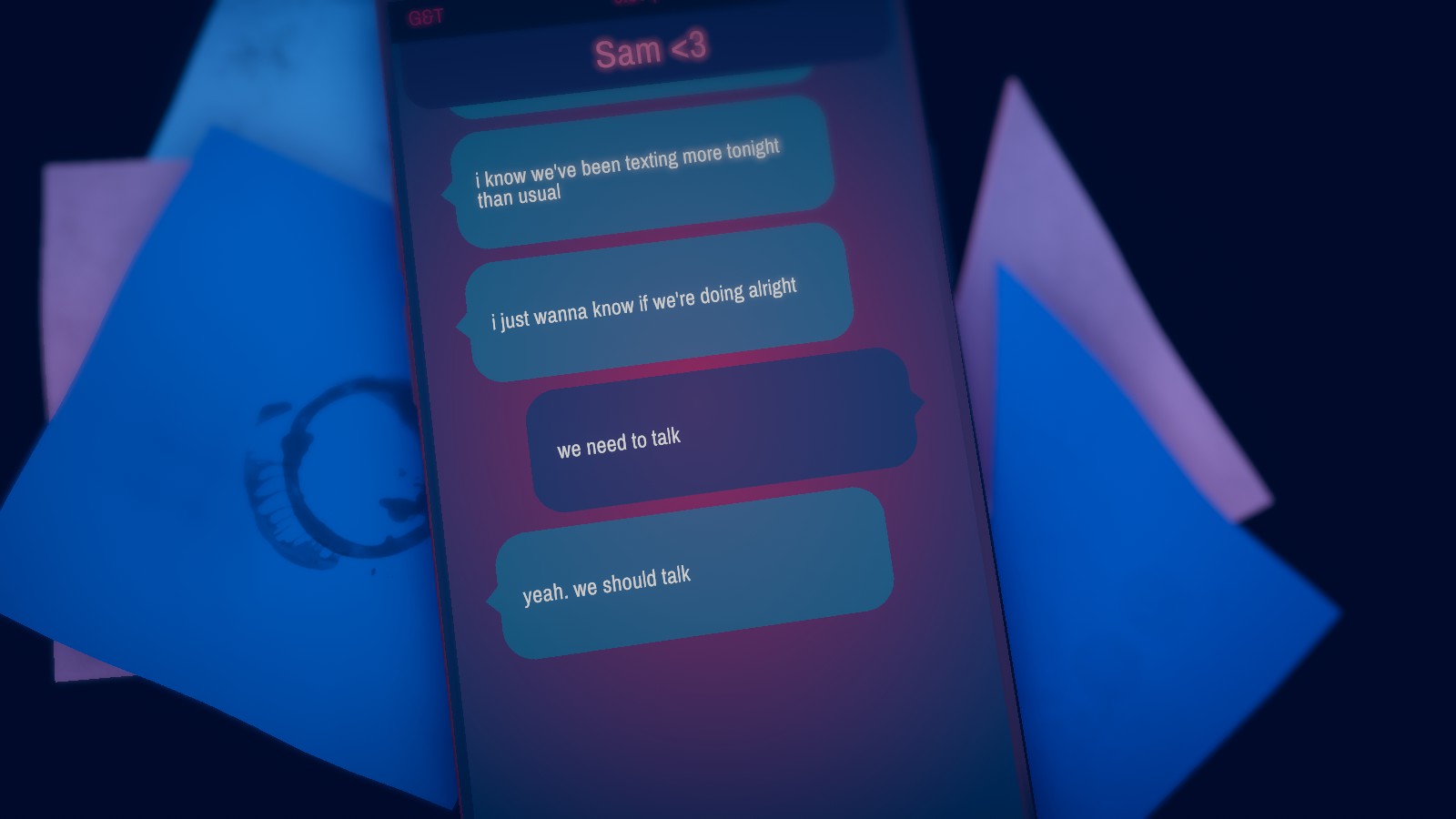 I honestly don’t know what to think about We Should Talk. It’s a unique idea to base a whole game on, rather than having it be an aspect of a game, but I don’t really think it lived up to it. Taking away the potential that the idea presents, it’s a subpar visual novel that aims to put you in awkward conversations. I guess I expected more out of it considering the potential it had and the different dialogue system it introduced as well as playing other games that hit this basic idea better (just without the sentence spinner dialogue system). I really don’t see it worth picking up unless you find the potential of it more important to you rather than how good it ended up being.