In a nightmarish purgatory that’s part Cormac McCarthy and part Mike Mignola, William Mason can’t seem to find any peace. He’s haunted by memories of a preacher, grisly murders, and all manner of sin. Luckily, guns still work really well in the afterlife. 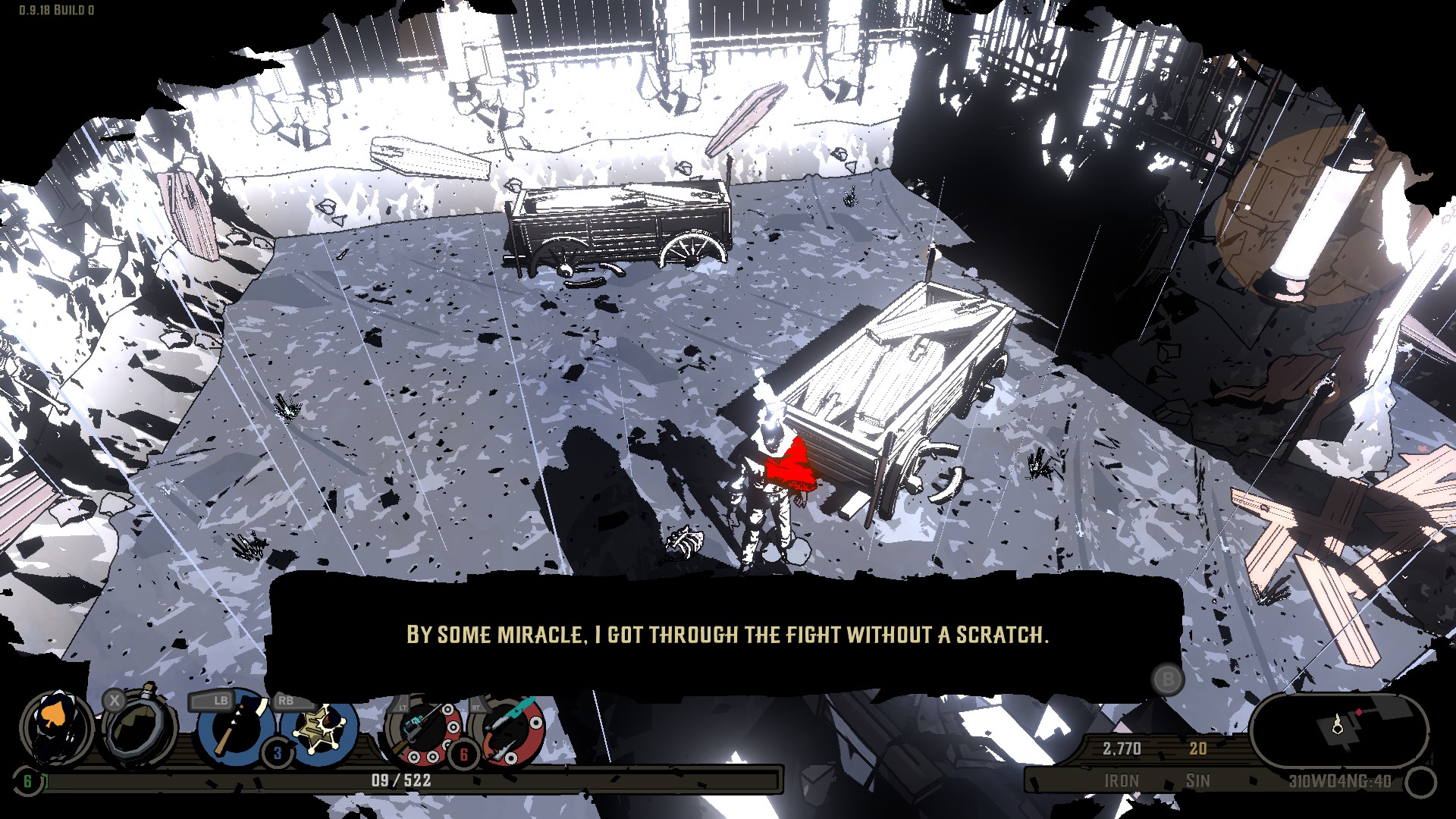 West of Dead is an intriguing mix of cover-based shooting and roguelite elements. Hot on the heels of Curse of the Dead Gods, I find myself once again exploring dark crypts with tense, weighted combat, where light is essential to defeating enemies. Instead of wielding a macuahuitl against some jaguars, I am instead mowing down wendigos and dead outlaws with my revolver and dynamite. 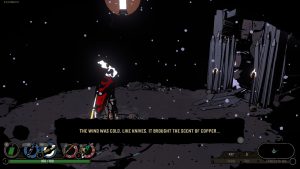 This is far from a frantic twinstick-shooter. Instead West of Dead takes a very careful and precise approach where players will find themselves rolling and diving for cover. Weapons automatically reload when the player isn’t shooting, but they reload faster when in cover, and cover also provides some safety against all manner of projectiles volleyed at the player. 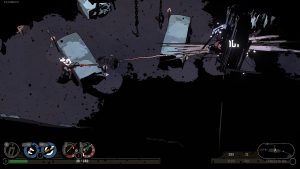 Cover can and will break. There is a bit of respite between battles, as fights only break out in rooms and not the various hallways that interconnect them. Players will often find themselves in tense shootouts where they have to time their weapon reloads carefully as they trade shots with enemies. Lighting a room will also stun enemies giving the player precious time to pick them off or find cover. Enemies in darkness can not be locked onto, so it’s possible to try to free aim against them, but it’s much easier to run out and light a lantern than to shoot blindly. Luckily there are more than just guns at the player’s disposal. 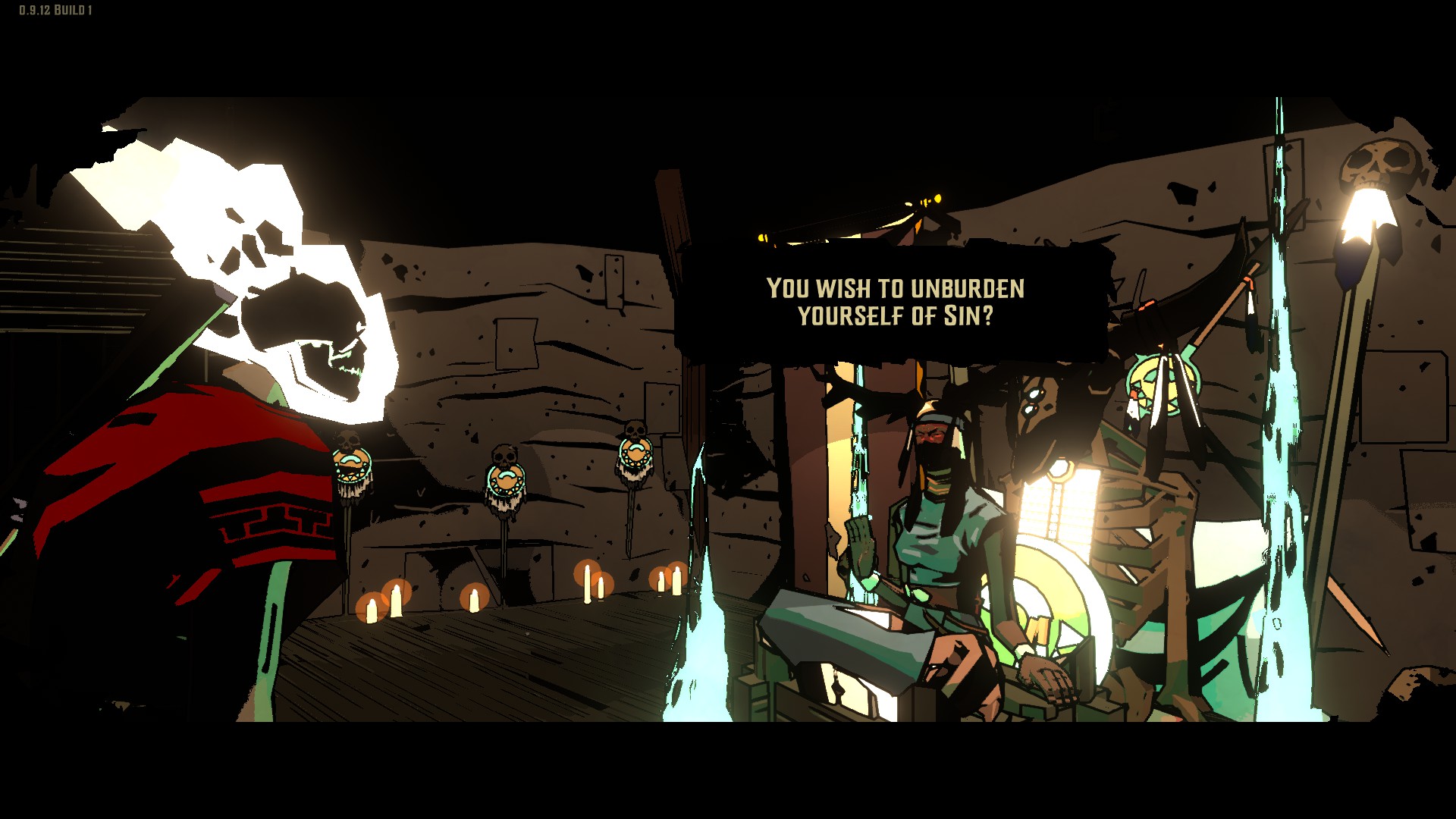 The supernatural setting of purgatory is more than just an excuse to have an edgy flaming skull protagonist. There is a dizzying amount of otherworldly trinkets to slay the various otherworldly creatures. Some weapons will have bullets that chase down enemies. Others will encourage certain playstyles, such as a shotgun that guarantees critical shots when fired from cover. Along with guns the player can also equip 1 charm and 2 abilities.

Choosing the right kit is essential. Some weapons, charms, and abilities will drop from chests or in between rooms, while others can be bought at the store. The abilities range from making the player invulnerable for a short time to throwing a set of knives at surrounding enemies. Most of the charms offer players a kind of health recovery or some reduction to reload time.

On top of this players will periodically come across rooms with shrines that allow the player to increase one of three things: their health and melee damage, their gun damage, or ability damage and cool down. Each level up gets reduced benefits for that stats, so the first increase will present a huge difference, but a few level-ups later and the benefits are negligible. Because of this plateau, the player is really encouraged to spread their level-ups rather evenly. 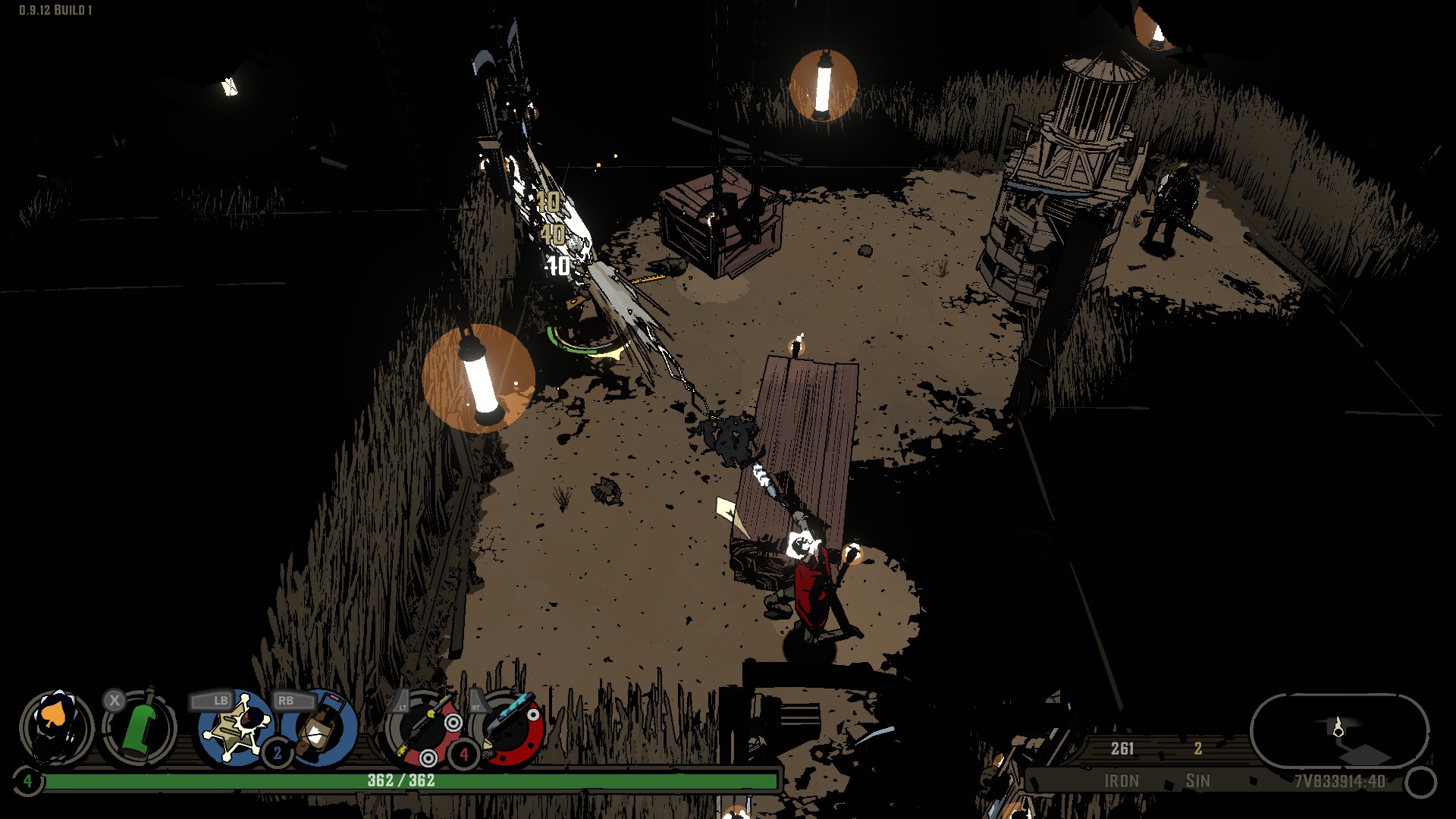 These Boots Are Getting Mighty Heavy

Levels get huge in West of Dead. Even in the early areas, you will have to wander around and backtrack a lot. Eventually, after defeating a certain boss, players will get the ability to fast travel between checkpoints of sin (more on that later). It felt downright cruel having to trudge through the sprawling maze-like levels without this fast travel. Even with fast travel, the level design is tiring to explore. 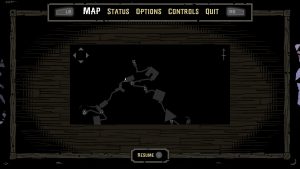 At times WoD feels slow rather than tactical. The careful, cover-based shooting has a healthy heft to it. It’s satisfying to find the slow rhythm of battle and come out of a rather difficult room unscathed. But certain design choices (like the levels) make the game feel too slow for its own good. Sin is gathered from killing enemies or periodically found around the different rooms of a level as shown by a circle of flame on the floor. Sin is taken to the witch after completing a level, and it is used to unlock new toys and permanent upgrades for the player. But, if the player dies during a level, all the sin they are carrying is lost. This makes every defeat that much more frustrating. Some more satisfying unlocks are priced extremely high. 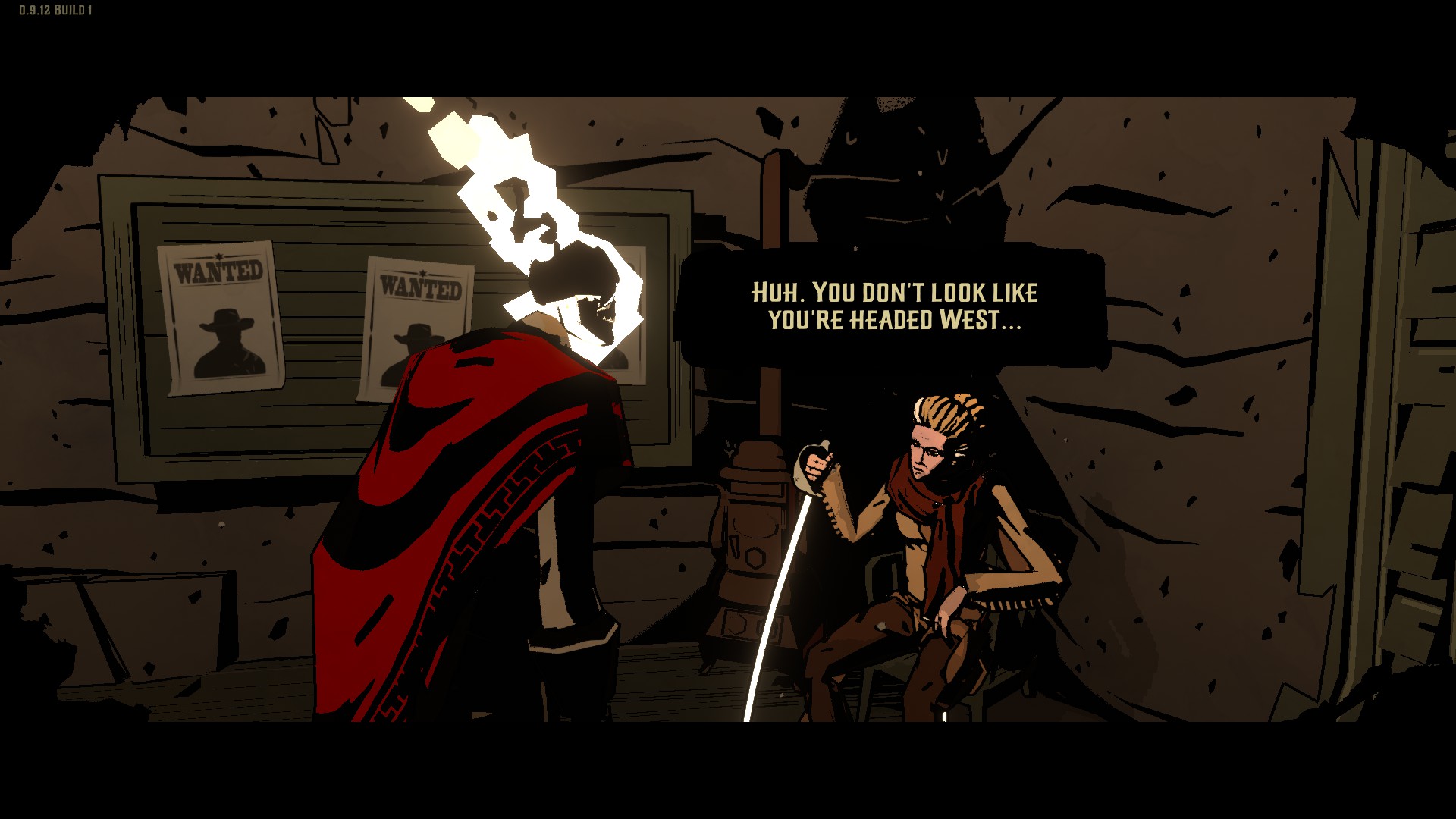 West of Dead is electric with style. The heavy contrast cel-shading combined with Ron Perlman’s voice acting immediately bring to mind comics like Hellboy, which is a welcome treat indeed. The enemies look ghastly and all of the effects and flare make battles feel explosive. There are enemies that strategically flank, slow-moving heavy hitters, or even some that teleport. Each encounter could be your last if you aren’t careful, and I love how that feeling stayed with me no matter how much I beefed up Mason. Swapping around between covers amidst ghostly plumes of smoke or cracks of bullets is a satisfying display of light and sound. 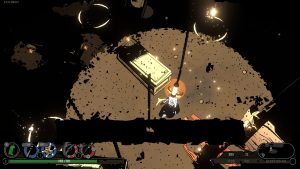 The lore and narrative are also shrouded nicely in mystery. Completing certain tasks, like defeating bosses or accepting the challenge of killing 6 enemies without getting hit once (lest you die) will unlock memories of Mason’s past. Defeating the final boss unlocks a new chapter with a new final boss, and this happens a few times. Unlocking a new bit of story or a new item to purchase with sin is thorough motivation to hop back into the saddle even after an avoidable defeat. 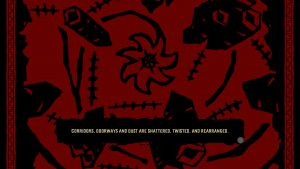 In my playthrough, there were some minor hiccups. The tooltip for the rifle would constantly pop up unwanted like a coworker sending a friend request. Likewise, the shopkeeper is surprisingly needy, commenting on your purchase, or lack thereof, and for some reason, the camera has to pan to him like a cutscene whenever he does this. Sometimes this sudden cutscene jump would make it impossible to advance levels and I would have quickly quit my game and reload to be able to proceed. 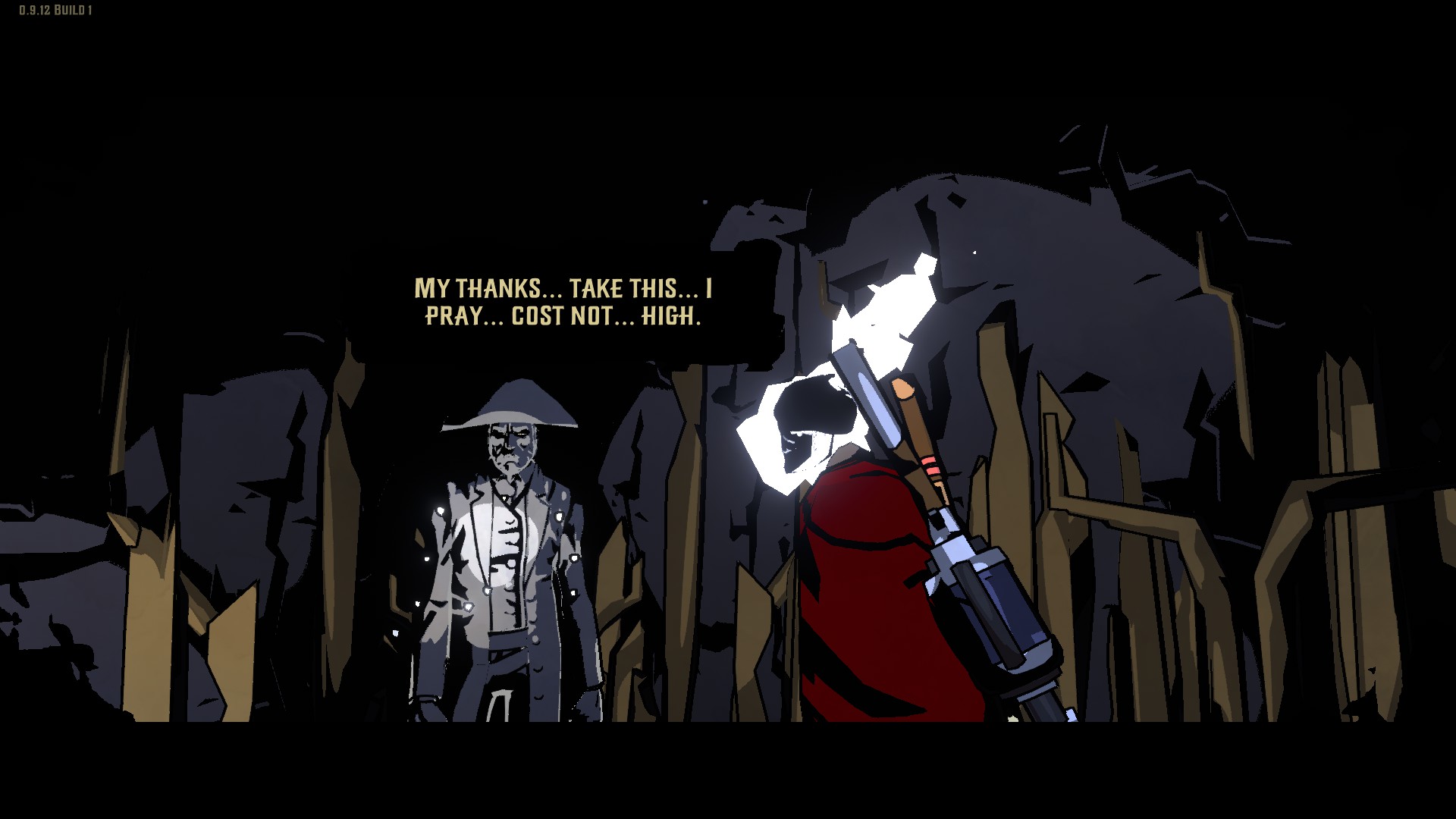 West of Dead is stylish and satisfying. Making cover an essential part of gameplay makes this roguelite standout on top of its already great presentation. It has a few shortcomings with pacing now and then, but overall West of Dead packs a punch.