PREVIEW: Curse of the Dead Gods

Maybe more of a blessing in disguise

The screech of a discordant violin announces each misstep. Spike traps, orbs of shadow, the swing of a giant hammer, the health bar slowly drops away and with each door through the maze the curses grow stronger. Soon, even trying to get gold burdens me. With a macuahuitl in hand, I know I won’t make it this run, but I am already planning a different approach for next time. 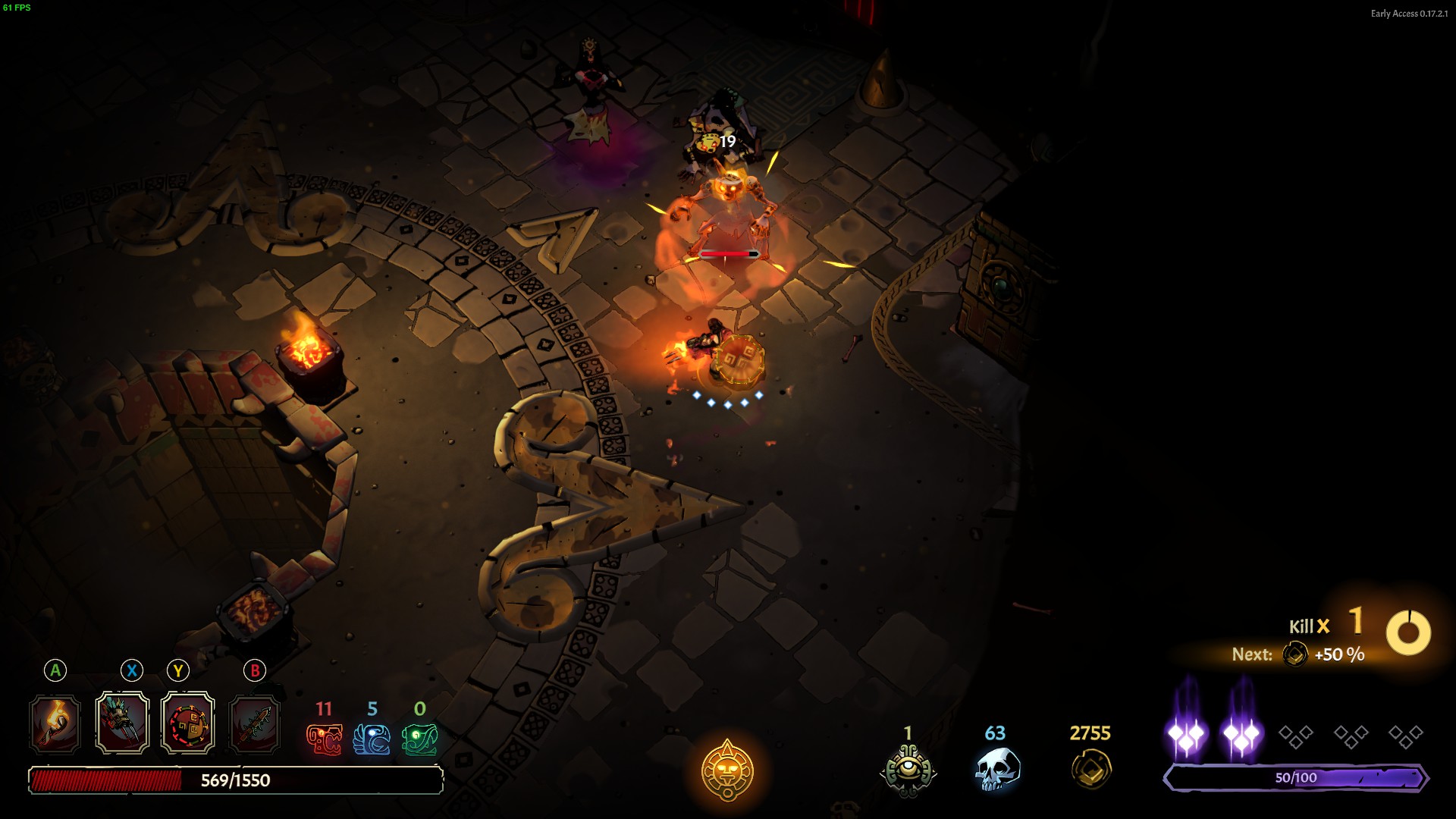 Donning an explorer’s duster with mutton chops and whiskers, you are probably playing as a conquistador that stumbles into the wrong temple. The Mesoamerican setting is eye-catching with stone and flames galore (think of Aztez). This top-down roguelite is heavy on action and timing. The starting equipment is a torch, a sword, and a gun. You can charge attacks and combo together your gun and sword to knockback, stun or unleash a stronger attack. The attacks feel fast and responsive. Chaining together different attacks is important for the flow of combat, but it also depends on what weapons you are wielding. 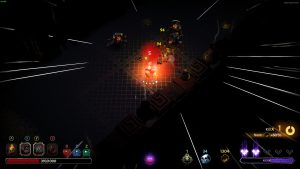 There are oodles of weapons of different kinds to pick up that each have their own specific attack patterns, bonuses, and stats. Eventually, you will come across massive spears, bows, claws, maces, and more that will have all kinds of neat randomized qualities: a spear that heals on kill and causes poison damage, or maybe a mace that will light up the dark and will do guaranteed critical attacks on charge attacks. 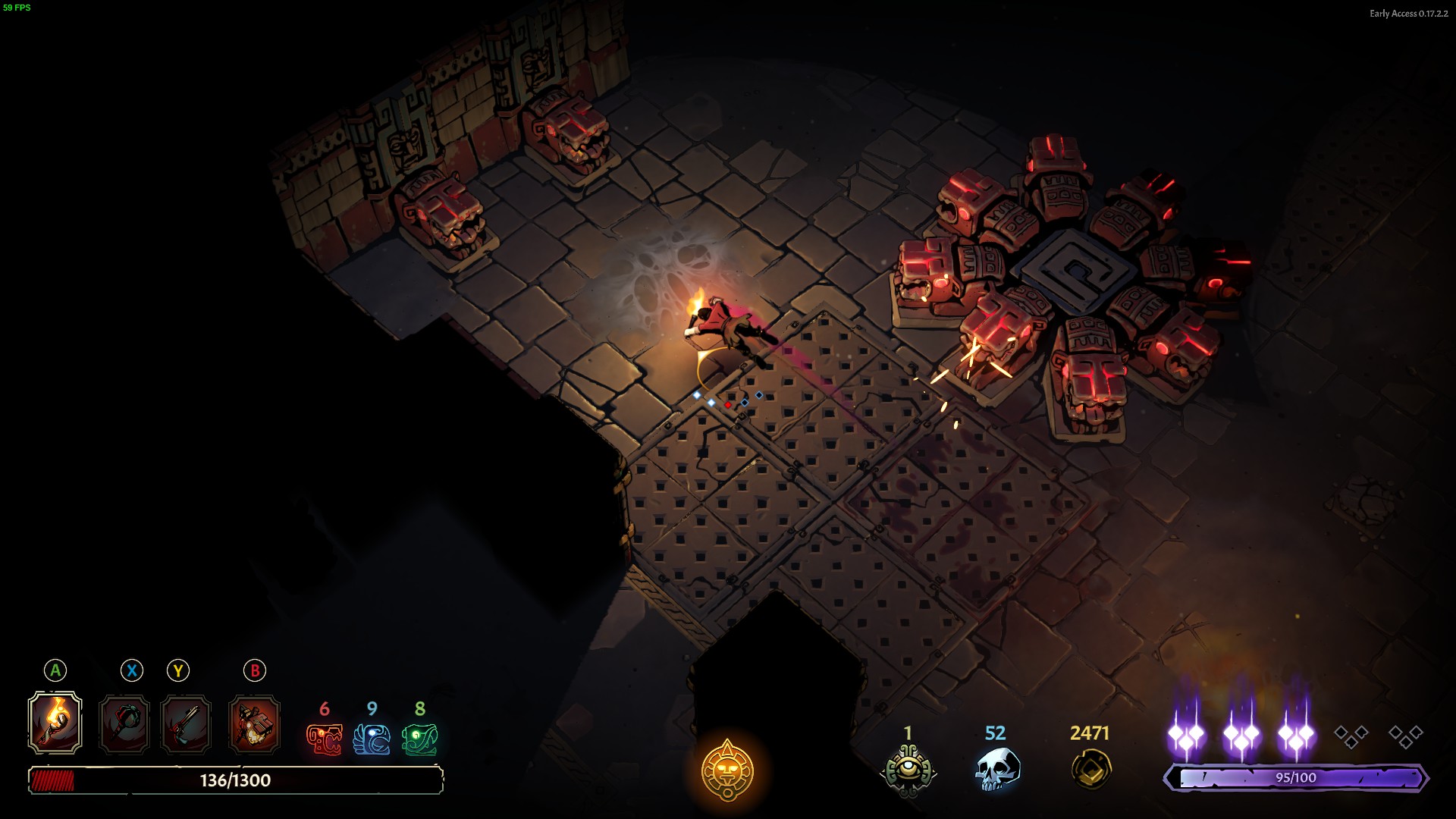 Blood for the Gods

Outside of the combos, another part of combat is your stamina. It is shown as 5 diamonds just below the character. Finishers for combos cost stamina, using your off-hand weapon costs stamina as do precious dodge rolls. They will regain slowly over time, or they can be earned back by doing a perfect parry (2 points regained) or a perfect roll (1 regained). In this case, perfect means dodging or parrying right as the attack connects. You can interrupt any of your attacks to parry or dodge roll, and most enemies telegraph their attacks, so most encounters should feel fair and satisfying. This gives the combat incredible weight and intensity. Make no mistake though, that doesn’t mean it’s easy. 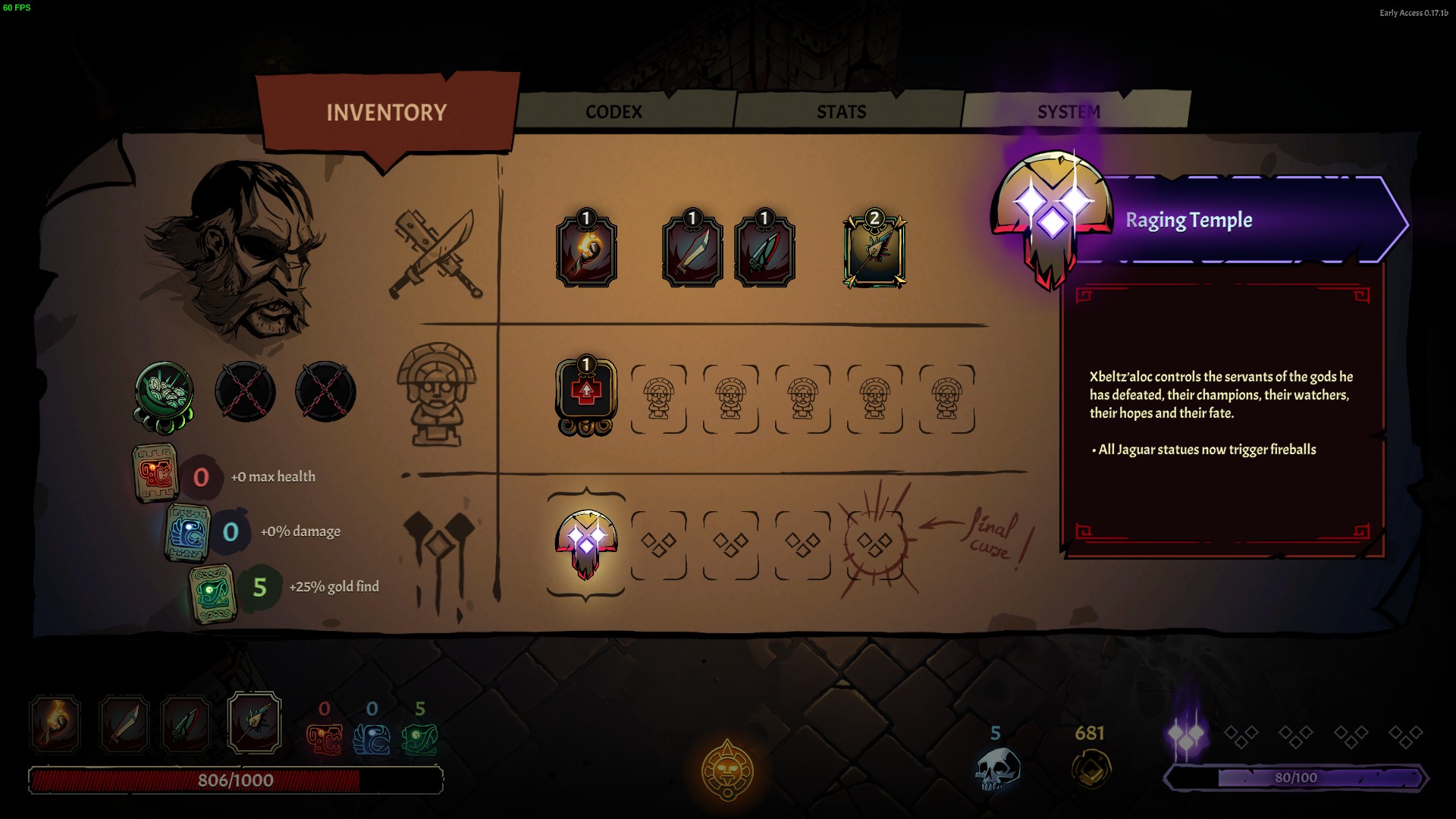 As tight as the combat is, there is a lot of working against you in this temple. In addition to managing health, players will need to watch their curse level because once it is full players will receive a curse that affects gameplay drastically. Some offer a bit of good and bad, while others are just bad for the player. For example, one curse will allow you to find blood randomly throughout urns in the temple which can heal them but will also cause the curse meter to grow.

Some enemy attacks cause the curse bar to increase as well, but your biggest enemy is actually just passing through the doors at the end of a level. This will always increase your curse level, but it will also show you which patch you can take next with a small icon for the reward promised for each level. This is a small, but neat feature to help players strategize their approach: maybe a new weapon would be good, but if your health is low you should seek a haven.

Throughout levels, players will want to light to be sure to keep things well lit. Torches, cobwebs, or enemies can all be set aflame to help reveal the many traps throughout the temple. Traps can punish the player and enemies alike. Exploring is necessary to find gold or randomly dropped weapons or relics, the latter being the equipment of the game to increase stats and add effects. At the end of the level, the player may encounter a shrine where they can pay with gold or blood: using your blood will incur a heavy curse fee. 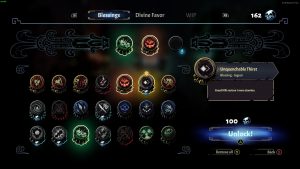 The last currency available is the crystal skulls. These are dropped sparingly but carry over each run. They are used mainly to unlock perks that the player equips before the start of a run. They can also be used to buy “favours” which let you use a shrine without spending money or blood. 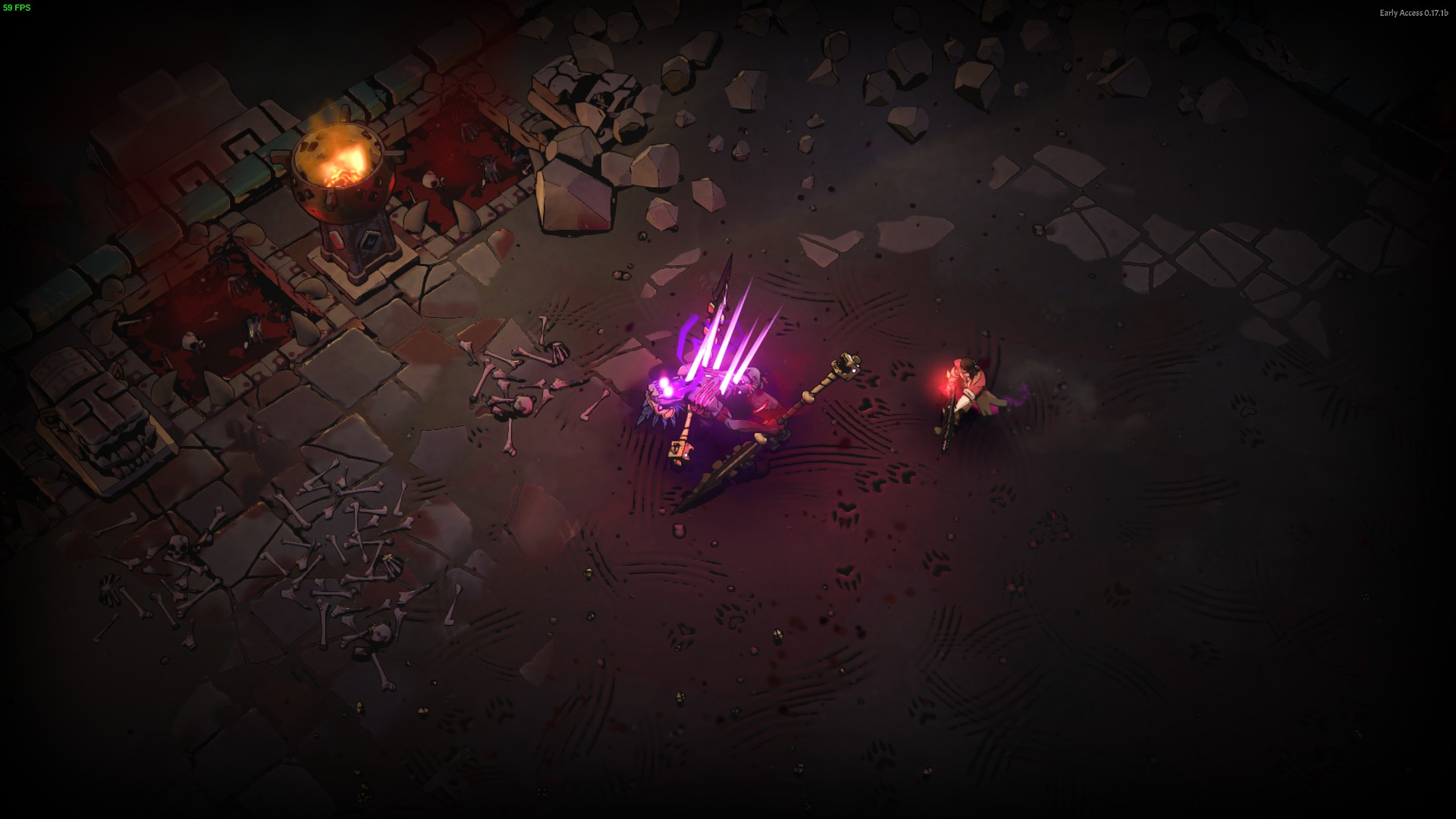 The Fall of Tenochtitlan

Currently, Curse of the Dead Gods is set at about 1/3 of its planned content. This amount already feels great. It took a few hours to beat the shortest mode, which is what you need to do to unlock more perks and the normal length run. At a total of 11 hours I finally beat the normal length run and it was a tough fight full of many failures. There is a longer mode that will probably take me even longer to beat, and I still have more perks to unlock and strategies to explore. 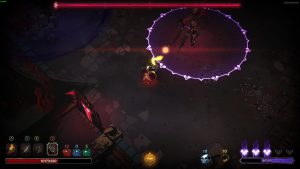 That is not to say that Curse of the Dead Gods is perfect. The balance does feel a little off: the enemies the cause curse are the most pain to deal with in general. The game is far from giving and I hope it stays that way, but the final curse the player receives is going to be loved by masochists only: your health slowly drains until it reaches one. The one feature that didn’t seem to work was the save option. You should be able to save at the beginning of a level and continue from there but it never quite worked for me. Though to be honest, I hardly ever wanted to end a run until I needed to sleep. 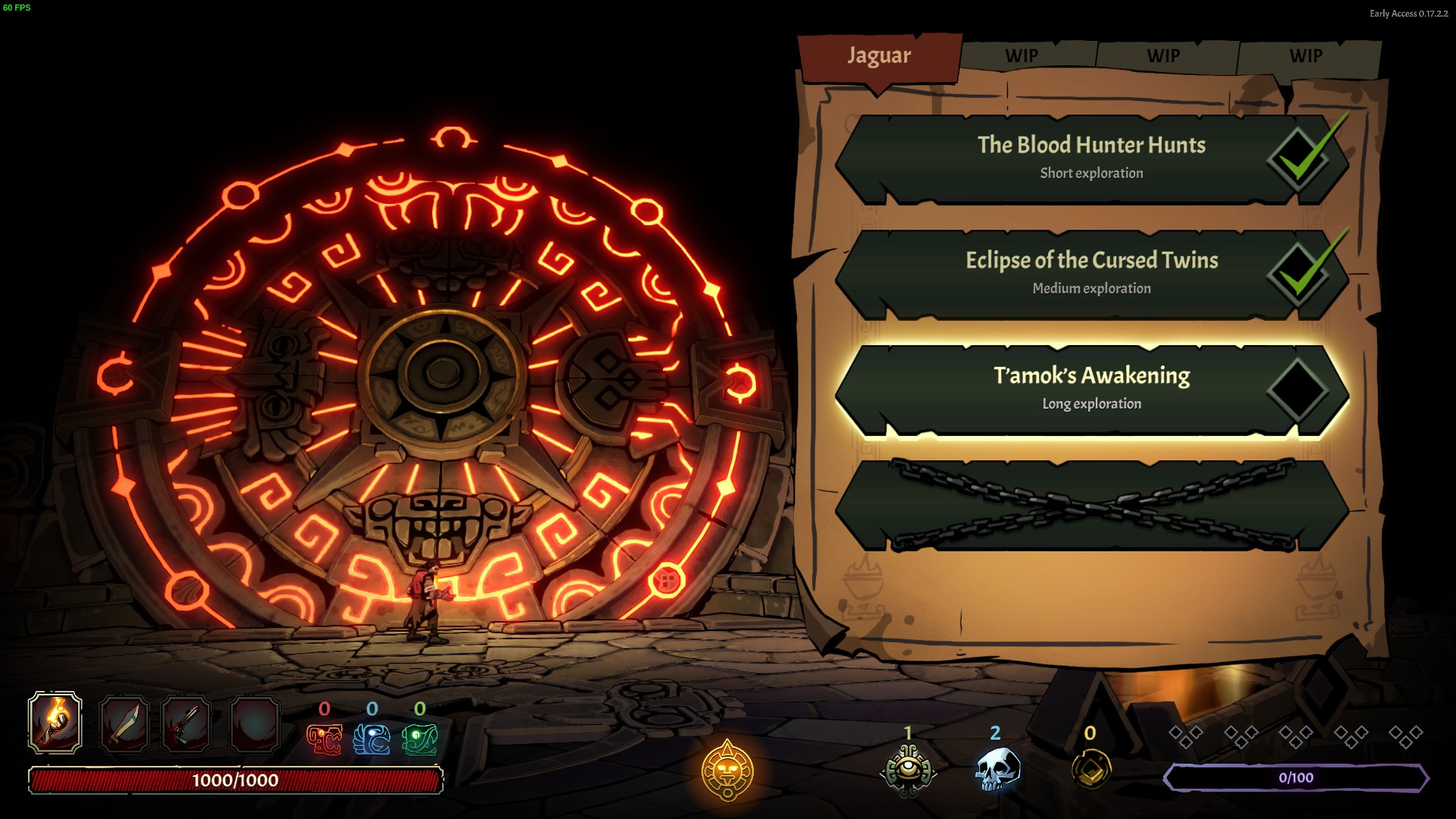 It’s always tough to recommend an Early Access title, but there is a lot to love here. The art style sits somewhere between Darkest Dungeon and Mike Mingola. The difficulty is heavy on skill and feels the right amount of frustrating. The Mesoamerican setting is severely overlooked in video games, and the combat is invigorating. Curse of the Dead Gods is on the right track to be a standout roguelite.