Great characters and frantic combat, but there’s just not enough to do.

Darksburg is a “co-op roguelite” (whatever that means) in Early Access on Steam. The “Going Rogue” update released a couple of weeks ago, with a new “premier” game mode: Outbreak.

For anyone who’s played before, the old game modes are still available, too, but to see them you have to enable “Legacy Mode” from the game options screen. Some comments in the Steam discussions suggest that the legacy modes may eventually return to the mainstream, but for the time being they’ve served their purpose and Outbreak is the development team’s focus for now.

Darksburg puts you and up to three friends (or randoms, or bots) trying to survive what essentially amounts to a mediaeval zombie apocalypse; your goal is to escape the undead-besieged city of Darksburg.

My colleague, Hotshot, previewed the game shortly after its initial appearance on Steam, and was disappointed at the lack of gameplay and level variety. This new mode promises to add more to the game in this regard, so how does it fare?

Darksburg is billed as a “co-op roguelite”, which is a term that I’d never apply to anything myself. I don’t even really understand what it means!

To me the game plays like a sort of hero-based RTS or MOBA, but with some Rogue-like elements like procedural generation and permadeath, and some sort-of ARPG-“lite” progression. It’s much less enthralling than I thought it would be, in any case, with a typical game involving killing hundreds of the same undead enemies over and over again as you run madly about each of the five levels, picking from one of three randomly chosen perks each time you level up, trying to collect as many curio shards as you can, and bemoaning the lack of any fun loot. (Yeah, okay, I was hoping for more ARPG influences than RTS or MOBA influences.) 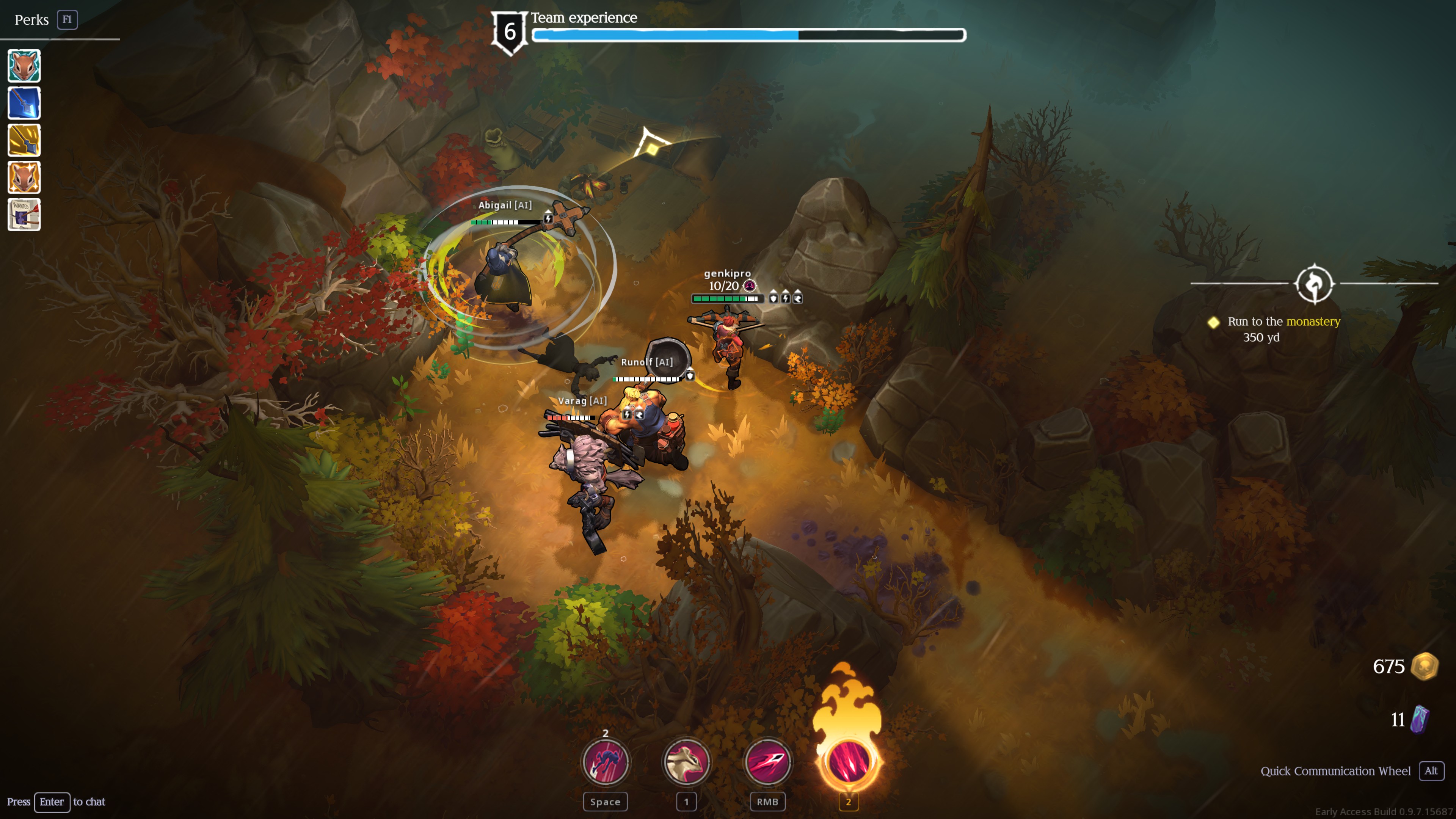 Permadeath works pretty well, though given the massive damage output of some enemies and the meta-progression relying entirely on finishing a level, it can be frustrating at times. The game would also be complete in around an hour without it, so there is that!

Procedural generation works less well, with each level looking extremely similar from run to run, and the distinct lack of loot and limited enemy and consumable variation making it feel even more like just more of the same. The random choice of available perks when levelling up doesn’t make enough of a difference to make any one run feel significantly different to another, either, and the short length (only five levels) hurts replayability as well.

You pick from one of five interesting characters — a cook, a nun, a werewolf, a quack, and an archer/thief — fill up the rest of your squad of up to four with AI-controlled bots or other human players, if you can find them, and then run around killing endlessly respawning undead enemies until you get out of Darksburg and confront the big boss. Kill him and it’s game over. Hooray, you win! 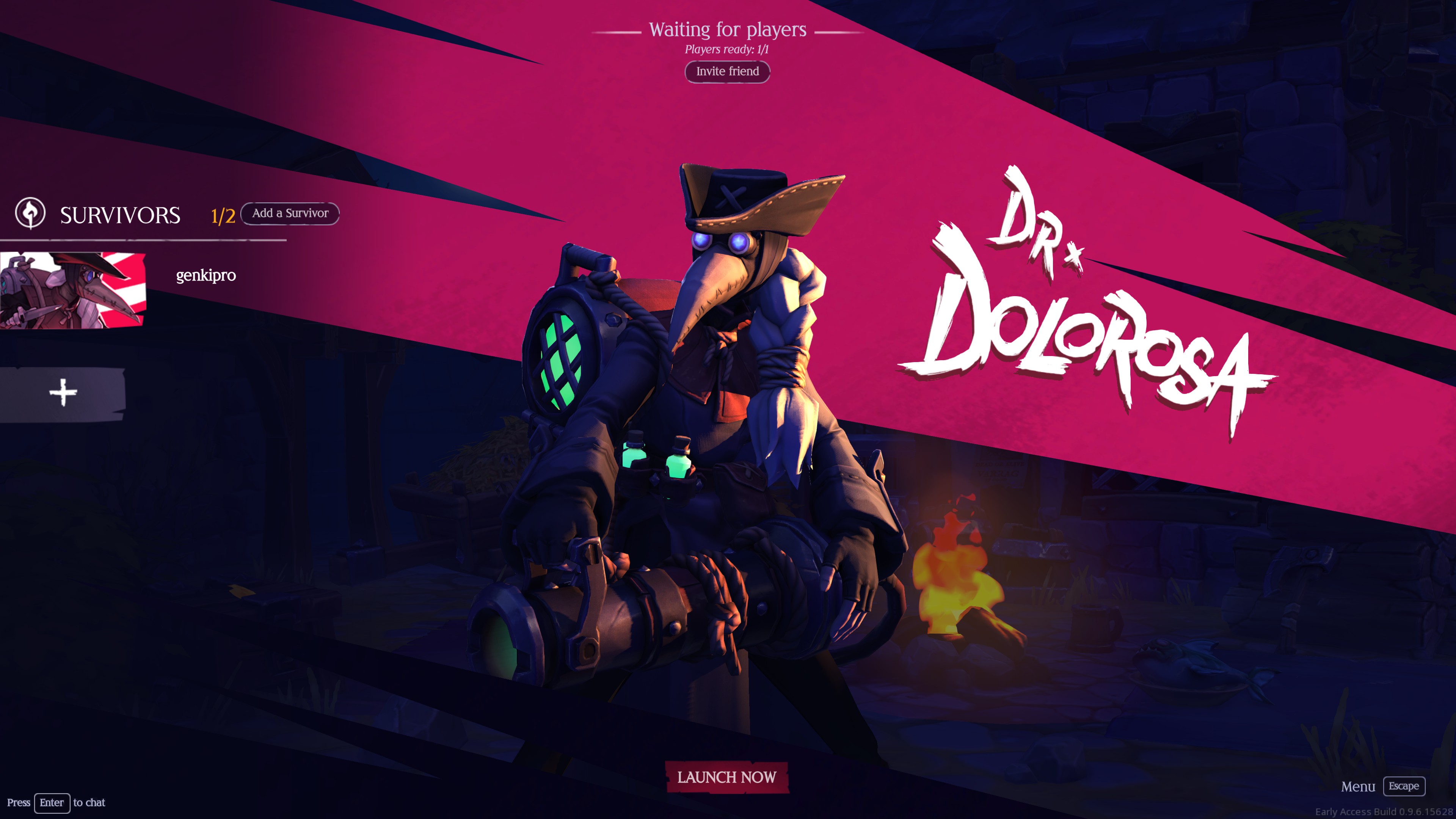 Each character has four unique abilities, though the first ability is extremely similar between the characters: a fast dodging action. Other abilities are much more interesting, at least, with the archer/thief (my favourite) gaining increased DPS through killing enemies without getting hit, and throwing her pet squirrel into the fray to lightly damage and distract groups of enemies; the nun planting a small bell tower in the ground that attracts enemies; and the cook cooking up a big cauldron of dinner that temporarily heals allies within range. Each of the active abilities works on a cooldown timer of some sort. 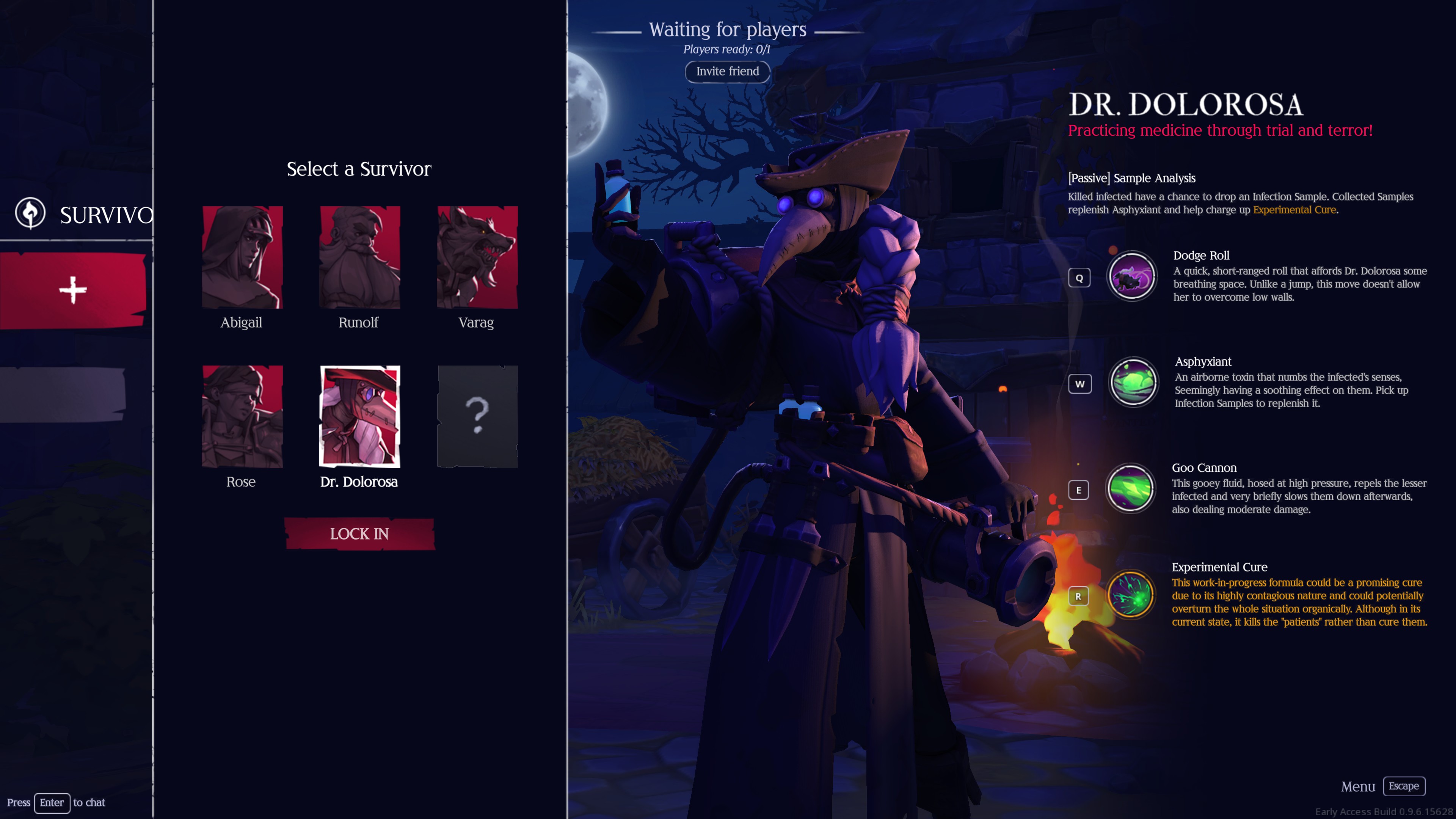 But progression for each character is limited to one of three randomly chosen perks each time he or she levels up, and many of those perks are simply incremental improvements. While these help you survive, certainly, most are much less interesting than the character abilities themselves. You’re also limited to a maximum level cap for each stage of the game, and enemies don’t ever drop loot of any kind, making killing them even less rewarding.

Crates and baskets strewn about drop gold and curio shards when opened, as well as — sometimes — one of four different healing items, a potion to fill your fourth ability gauge immediately, and a single offensive item: a bomb. It’s a very limited and uninteresting set. Gold is used to purchase potions at the vendor between each level, while curio shards may be dropped off at the curio chest at the beginning of each level in order to unlock permanent small upgrades — i.e. meta-progression. These are incredibly grindy to earn. 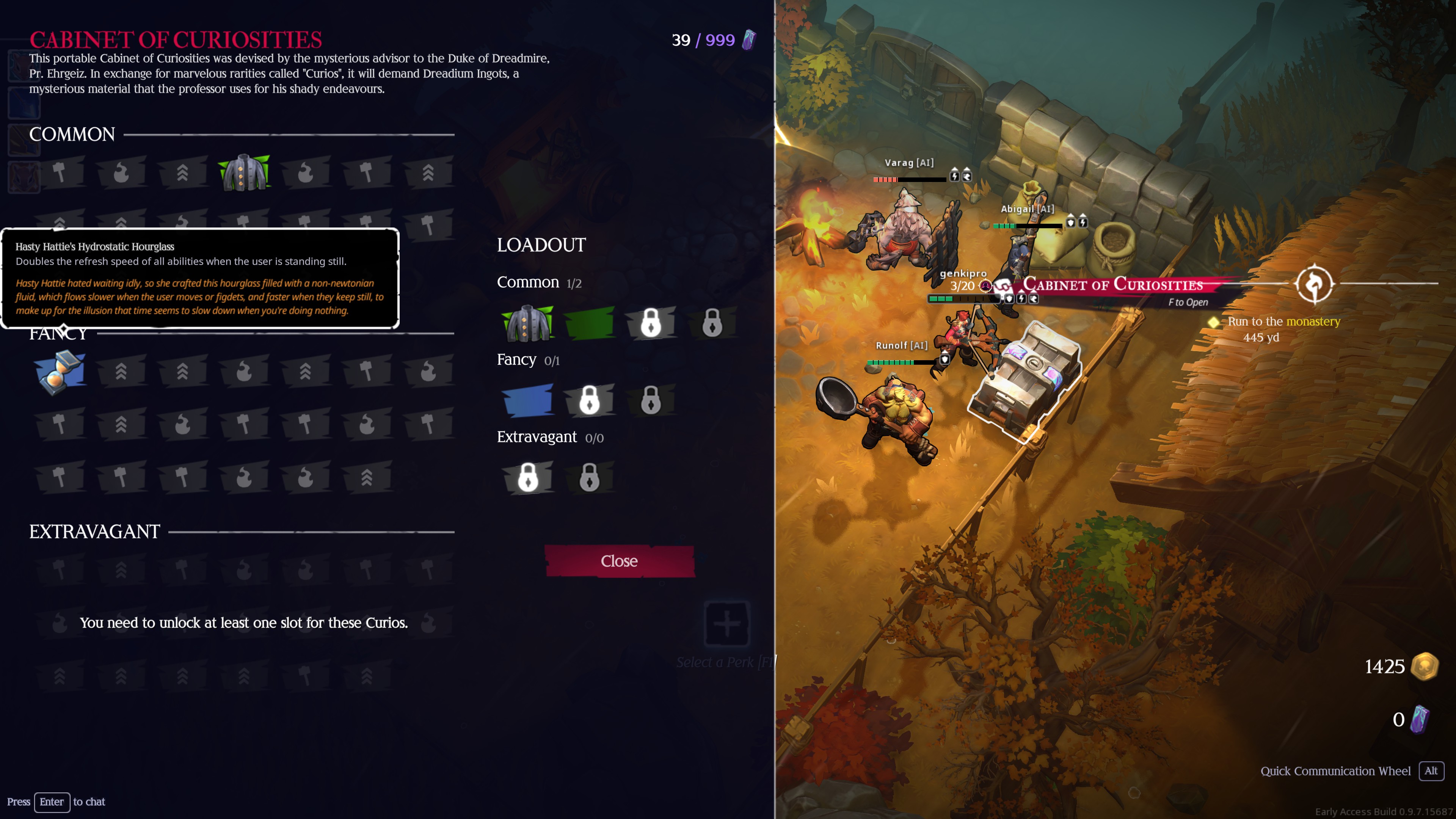 The enemies themselves are initially interesting, with infinite numbers of ‘cannon fodder’ troops occasionally interspersed with “revenants”: little mini-boss enemies that are like glass cannons with special attacks, doing huge damage and wielding potentially game-changing effects, but typically only taking a few well-placed hits to destroy. Unfortunately, though, after the first five minutes you’ll have seen almost all the game has to offer in this regard, as there’s only a handful of revenants and a very small number of normal troop types, all of which do more damage and soak up more damage with each stage you reach.

Darksburg builds upon the basic gameplay loop with a few design ideas that are a bit more interesting. 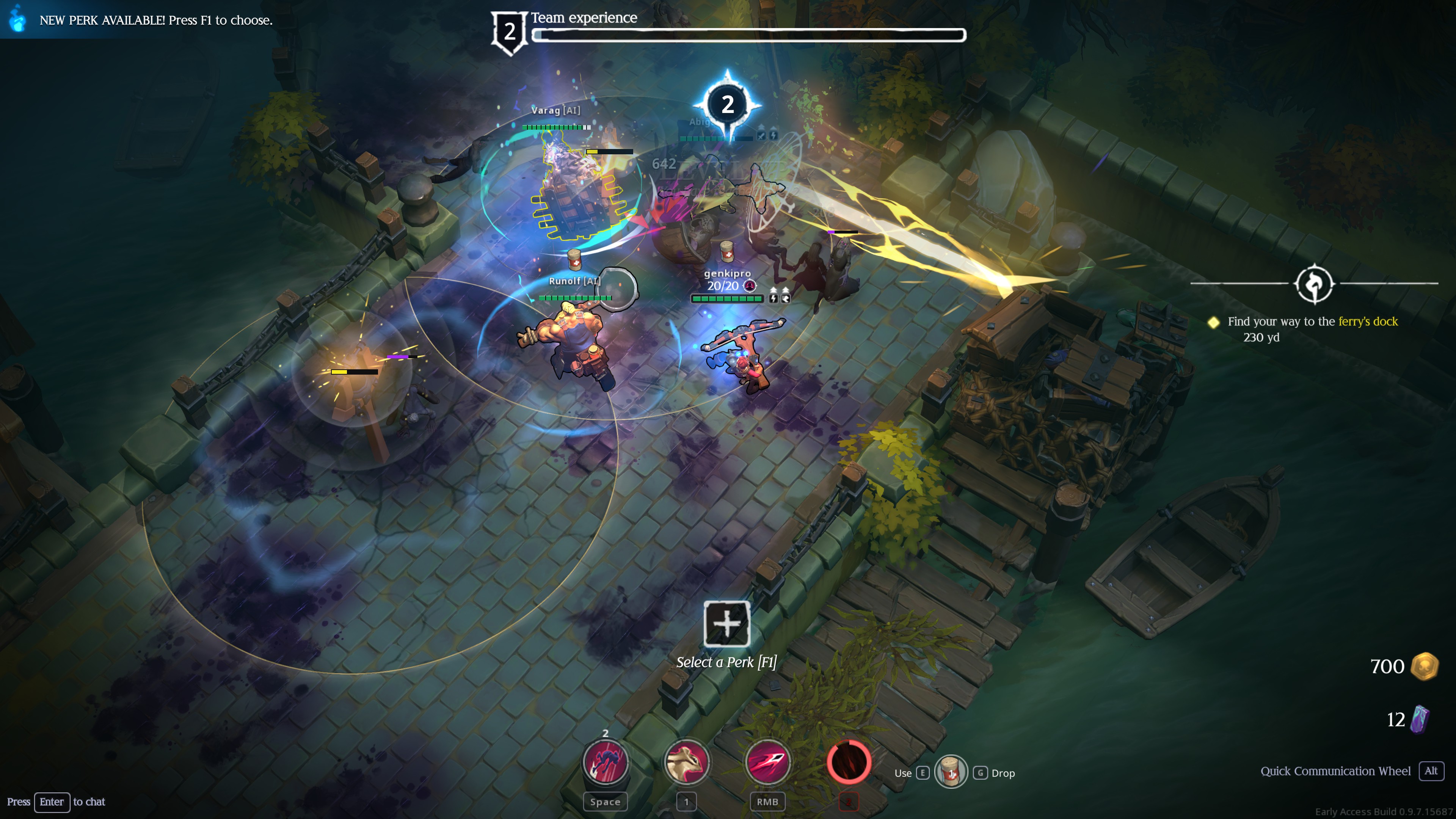 Completion of a stage typically requires completing one or more actions: repairing a door, guarding a church, knocking down a fence, and so on. These always happen within an arena-like environment, with a couple of hordes of zombies — and usually two or three revenants or stupidly powerful guards — making things difficult. These add a little more interest to the gameplay, but they typically amount to annoying “run here and pick up this big thing that makes you unable to move fast or attack” types of events, which aren’t actually much fun (especially in single player — the bots won’t pick up the items of their own accord).

The infinitely respawning enemies are both good and bad. It’s good that there are endless hordes to fight against, since that’s basically all you do in the game, but it’s also annoyingly frantic at times, often not even giving you a chance to choose a perk. The speed of the combat is also a little disappointing, I think; it often devolves into twitch-based gameplay rather than demanding any sort of tactical decisions. For melee combatants in particular, it feels a bit like a war of attrition: sheer zombie numbers vs your hit points.

Presentation and Quality of Life

Graphical presentation is mostly lovely, with Darksburg and its surrounds portrayed in a sort of cartoonish “2.5D” style. Characters and enemies look nice and special effects are great, but it’s often hard to work out exactly what’s going on with all of that action. Character portraits and descriptions are colourful and interesting. 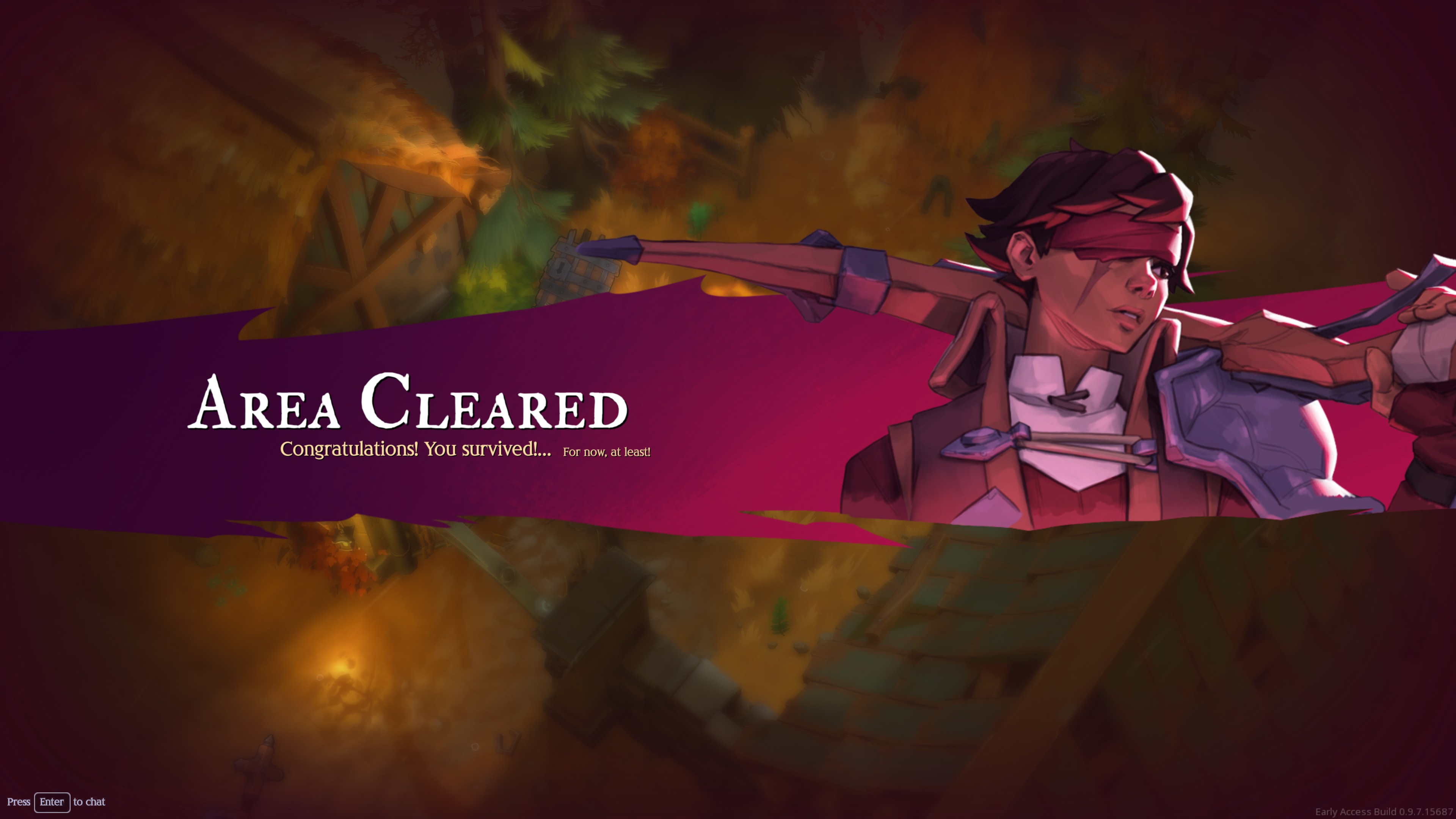 It’s a shame it’s not fully 3D with a zoomable and rotatable camera, as I’ve often found myself annoyed at how little of my surroundings I can see, or with my path or enemies hidden inside or behind buildings. The lack of controller support seems a fundamental problem, too, given the action-oriented nature of the game; it seems like it would be perfect to sit back and play on a controller. Speaking of controls, the default keyboard and mouse modes were completely unusable for me. Thankfully the controller customisation is relatively good and I ended up making a keyboard control layout that mostly worked well for me.

Sound effects are pretty good and I liked the professional-sounding voice work, though the script is relatively limited in this regard. Music is lacking; I only noticed a couple of tracks, but at least they didn’t feel out of place. The game seemed a bit too quiet at times, though.

There are a few grammatical errors and inconsistencies, but it’s not too bad.

Graphics options were plentiful, except completely lacking in any sort of resolution setting! You can either play full screen or in a window, but you’re given no choice of full-screen resolution or window size. I encountered severe, but infrequent, pauses/stuttering in both modes, but usually only once or twice per level. I had one crash to desktop, too.

While the focus is certainly on co-operative play, the developers have ensured that all game modes are playable with only a single player, with other roles being able to be filled by bots. While the bots do pretty well in offense, in some of the more tactical situations — such as when having to defend a location or collect special items to use to move further on a stage — they’re often next to useless. I’ve also found them reticent to revive me after falling in combat if there are any remaining enemies nearby — and given the infinitely respawning creatures, that’s most of the time!

This makes it particularly sad, then, that the times I’ve tried to join a multiplayer game I’ve not found a single one available! The Mainland China server had a single two-player game in progress with only one player one time when I checked, but apparently it was too far through the level for me to join.

If you’re buying Darksburg at the moment, then, you need to be prepared to play single player with bots, or bring some friends along for the ride. 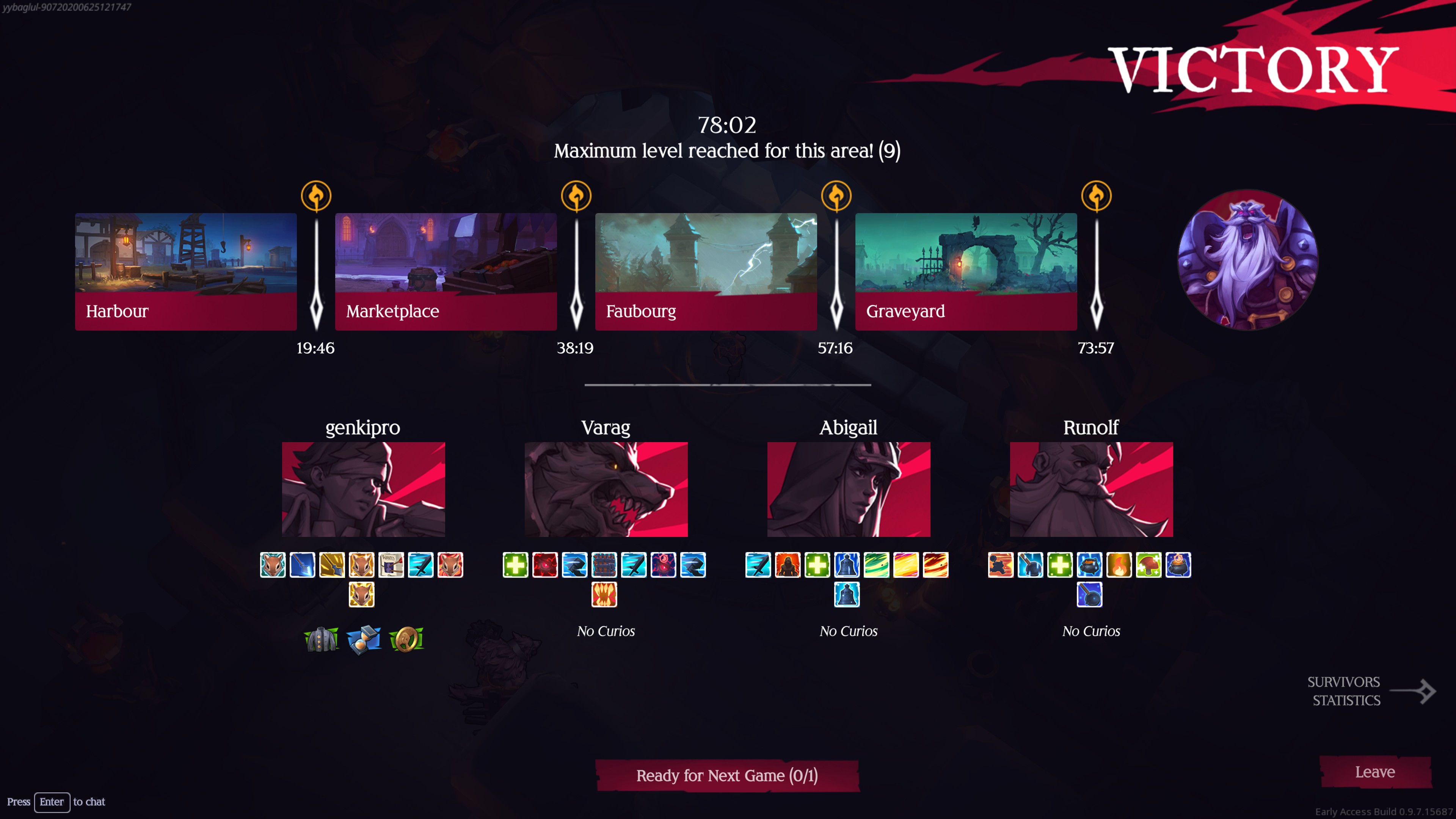 There’s a fair bit about Darksburg to like: interesting characters, nice cartoonish graphics, cool voices, Rogue-like elements, and some relatively large levels. But it’s too finicky for the speed at which it demands to be played, progression is too grindy, there are only a handful of levels and enemy types, and there’s too little difference between the five available characters. It just ends up being too frantic and repetitive to be much fun. Given the co-operative focus, there’s also a disappointingly small number of public games to join. Further, with the “lite” nature of the RPG-like aspects, it’s disappointing that there’s no controller support, and, while you can customise controls somewhat, the keyboard- and mouse- focussed options both feel out of place.

While it’s a bit of fun for a few hours, I can’t really see myself playing much more of it unless there’s a lot more content added in the future. It’s not really enjoyable or different enough to want to play through again after completing the short campaign. If it were significantly cheaper I’d recommend it for a quick blast, but at its current asking price it simply needs more content.