Shiro Games has an interesting pedigree when it comes to indie games – from the unique (and pretty good) Evoland games to the greatly appreciated Northgard so it was an understatement to say I was pretty hyped for their following game: Darksburg.

Alas it is here and while it is in Early Access, the game has great ideas and potential but in its current release state it’s a mediocre and overpriced title that suffers mainly from repetitive gameplay, which paired with little variety in modes and especially in maps, makes for a really fun time for the first couple of hours, after which you’ll probably still be able to refund should you grab it this early. A cautious recommendation – mainly directed at those willing to support and give feedback to the developers.

The core of Darksburg is the gameplay which centers around a class-based top-down ARPG, but much more linear and boring. Darksburg is what I’d describe as Bloodsports.TV meets Left 4 Dead – 4 characters are placed in a level that is relatively linear with a couple of routes to allow flanking and escape tactics and must kill zombies (with variants, thankfully, you won’t be fighting the same zombie type over and over) while completing objectives to progress until reaching the safe door.

It’s very Left 4 Dead-esque and I mean this in the best possible way, the levels are open enough to allow a team to be lost but also effectively strategize how to play the following sections. Zombie varieties, mini-bosses (here called Revenants) and Bosses are plentiful enough to keep you on your toes alongside your team.

The gameplay itself feels very MOBA like, thus my Bloodsports.TV claim – especially since it even has a survival horde mode and it felt like I was playing Bloodsports.TV all over again. The game functions as a class-based ARPG; in the current state, only 4 classes are available…

… in a 4-player co-op game. The class diversity in your lobbies will be literally null.

Controlling movement with the mouse, you attack by clicking on zombies and spamming Q, W, E and R as is typical for games of similar control schemes. It’s sad as I feel this game would fair much, MUCH better in a WASD control scheme, alas Victor Vran, which is still probably the best ARPG in terms of controls. Zombie variants are pretty fast (especially some that literally leap a good distance towards the players) and the EXTREMELY slow player movement by default paired with the mouse movement lends the game far clunkier than I feel it should be. A few tweaks to the control scheme and a more hack n’ slash approach to the basic attacks paired with a faster overall movement speed (same for the zombies) would increase the pace and the overall fun of the game, in my opinion. As is, the game feels too slow and sluggish, especially due to how many zombies are on screen at once – it can be pretty overwhelming, which is pretty intense, admittedly.

The game shines in the zombies as a whole: basic zombies barely pose a threat unless in big numbers as you’ll probably find out at the end of most levels. The zombie variants, Revenants and Bosses are well designed and help everyone keep themselves on their toes and communicating combat strategies, distributing buffs and AoE’s while someone completes the objective is a pretty rewarding experience, as is the Victory screen at the end, showing you gain XP and progress based on your performance. After levelling a character enough you get to pick perks which alter the effectiveness of their respective abilities – these perks are available at levels 5, 10 and 15.

Grinding levels is, sadly, not that fun due to the overall pacing of the game and the little variety overall as you have to play with the same character over and over again with your friends (or randoms) playing the same 3 other classes over and over. There is no loot or different weapons/outfits/shield/etc whatsoever to help mitigate the over-simplistic aspect of the classes in this state of the game. The fact that I had a difficult time finding a full 4 player lobby also didn’t help the overall fun aspect – the game seems to be on a limbo with some people such as myself waiting for new content (only 3 levels to top this off just makes the game a massive exercise in repetition and not much else) and those who really liked what they played and are sticking with it. I’ve seen level 15 players already which does take a few hours to reach, especially if you’re rotating characters until finding “the right one”. 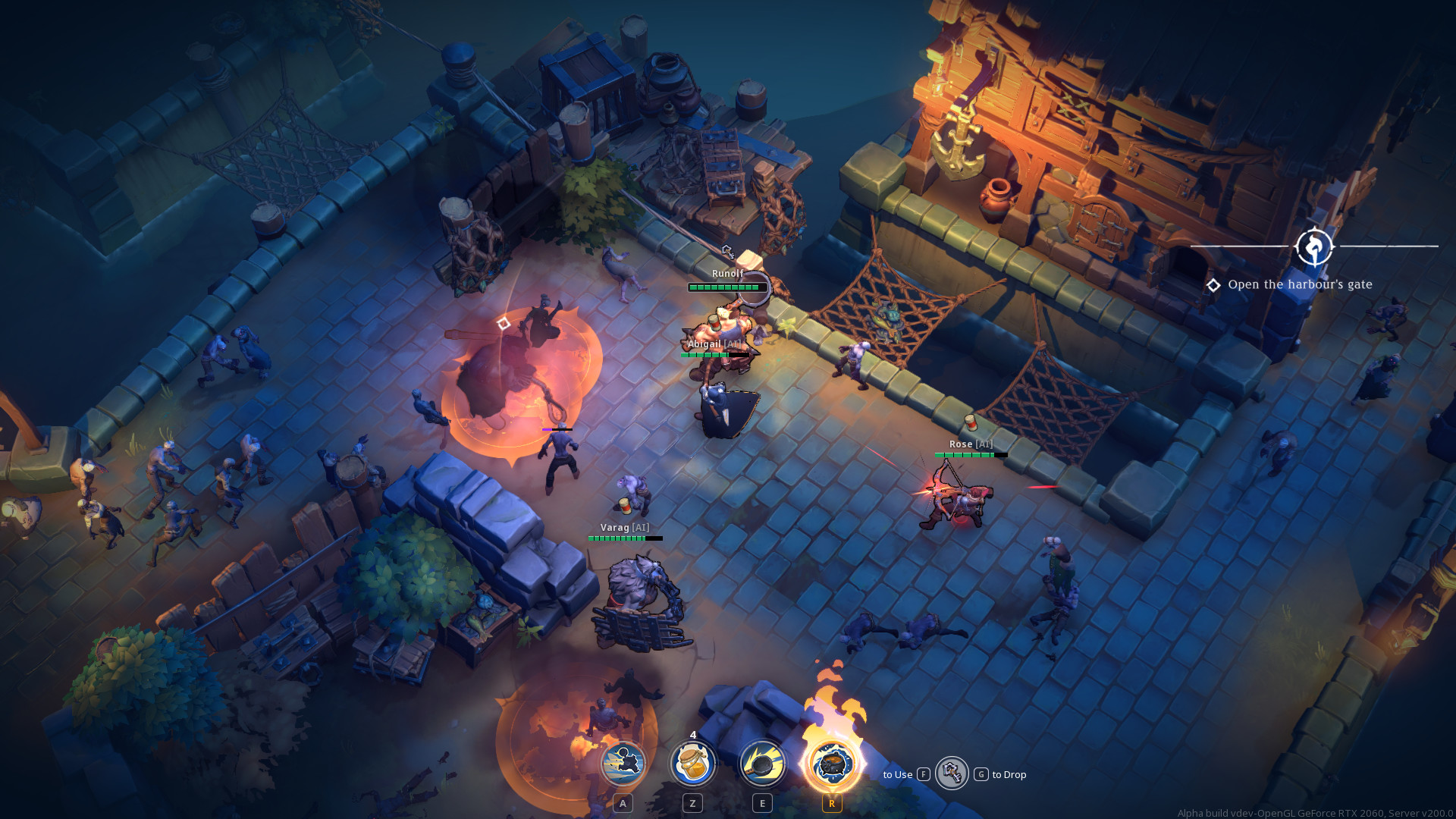 Overall, I think a refined control scheme would give the game a better charm, in my opinion. What I feel is a must for the game, in particular, is more levels and more classes to add a much-needed degree of variety.

It’s worth noting the game also has, much like L4D, a 4v4 versus mode, where 4 survivors play one of the 3 available levels while 4 other players play as the zombified Remnants, each with their own abilities and try to stop the survivors from completing the levels. I sadly did not play this mode due to a lack of a player base for the most part – co-op seems to be the preferred mode. With a group of friends, I can see versus being a fun mode but I’d wait for a sale or a free weekend to try the game out and convince friends to grab it – especially for a full lobby since the enemy AI is really weak and dumb.

Pretty spectacular overall. Shiro knows how to make great looking games and Darksburg is no exception with its cartoony, yet detailed environments, animations and character models.

The UI is very basic and there is nothing extraordinary worth mentioning. Even the in-game HUD is perfectly balanced in terms of size and positioning, giving all necessary information without any needless visual clutter.

Performance-wise, the game could use a little more work, sadly. The graphic customization has all necessary features but the performance seems weaker than it should – I was hitting an average of 50FPS on Medium/High (not Maxed) on my GTX 1060 and i7 with 16Gb of RAM, which exceeds the recommended settings BY FAR. However, I tweaked shadows down a bit and it seemed to bump the framerate to a stable 60 FPS – nothing an optimisation patch or 2 can’t fix during the Early Access phase, so overall performance isn’t bad but it could use some work. 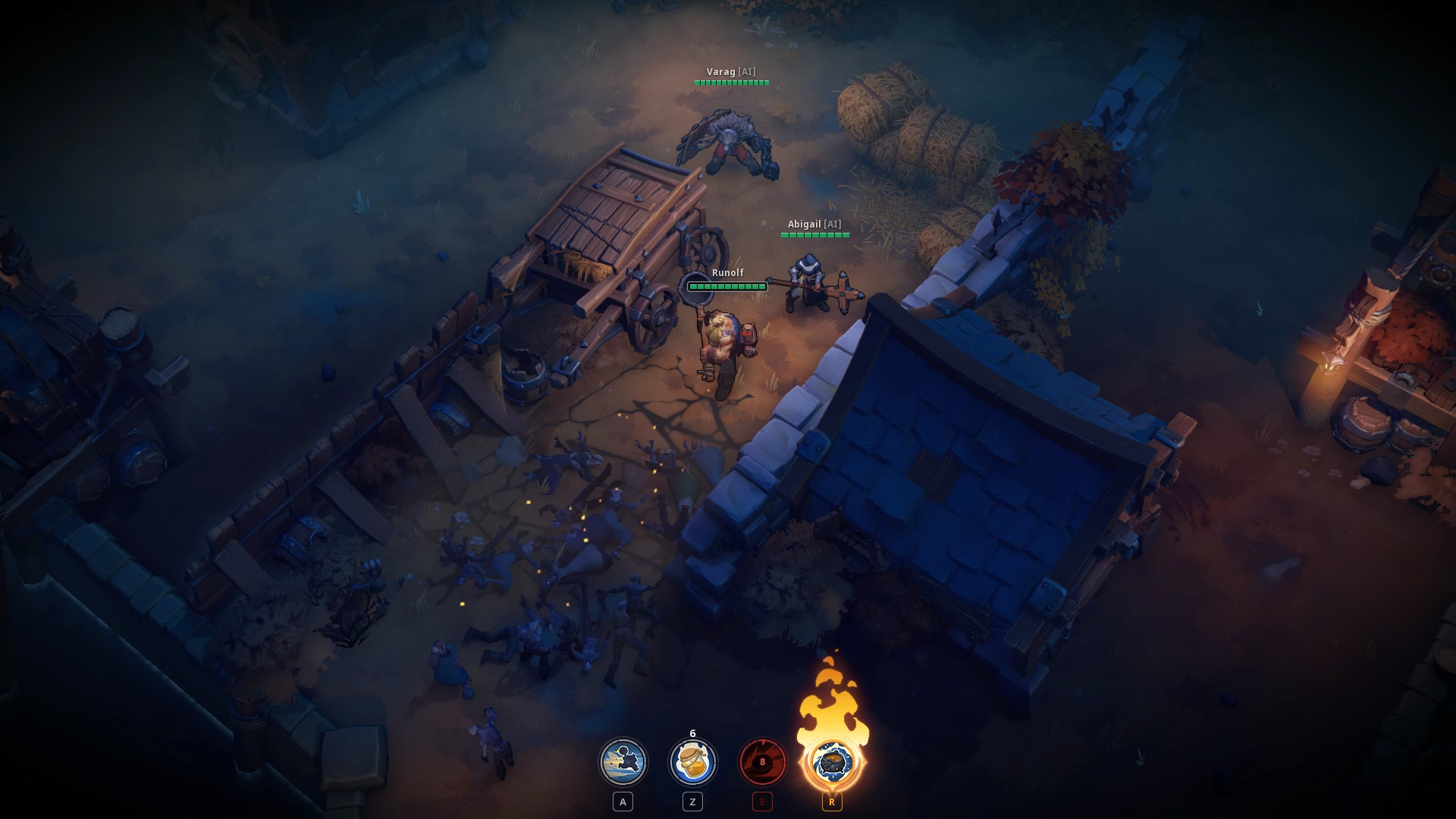 As far as audio is concerned, there is very little to discuss. The soundtrack is solid and the little there is fits both the combat and the more eerie moments when just walking through each of the levels in the Darksburg town. Voice acting is barely existent and is serviceable but what ends up disappointing a bit is the overall combat sounds as they sound too soft and have little impact. Ground smashes or even Varag’s bite attack (which deals a huge amount of damage) end up feeling far less powerful/impactful as it should, not only due to the sound effects being very bad but also the visual feedback being quite disappointing, minimizing the fun of using skills and feeling like a badass as you should.

Open the store page, “Follow” the game and wait for a sale and patch notes with content.

The game played well and is polished, as I did not encounter any bugs. The overall gameplay loop is too limited and provides little variety to the player, there is no group class variety and only 3 levels which you can beat in 20 minutes each isn’t a great start for the title.

Given Shiro Games’ history, however, I’m putting a great deal of trust Darksburg will release its v1.0 in a great state but right now, only the foundation is there – it’s a hard pass in its current, lackluster and repetitive state.