The origin story we’ve been waiting for.

The Heart’s Medicine series, specifically Heart’s Medicine – Time to Heal, was the game that got me into Gamehouse’s games and ever since I’ve played a good chunk of the PC releases since while I waited for the PC release for Doctor’s Oath. It’s been interesting seeing how the games progressed and being able to pinpoint when each game was developed. The games became more hectic, more items or more combination items, the chance to call in more customers rather than having to wait (along with getting a bonus if you finish the level early), some requiring you to play multiple times if you want to get everything, having daily challenges, and the most obvious being actually having animated scenes and the models being different. I do suspect the monetization implemented also changed for those that are playing these on mobile. I don’t really know how it is since PC versions have a one-and-done purchase, but I do know that Doctor’s Oath wasn’t making a great translation onto PC due to it and looking at some reviews does paint a picture for at least that game. For this one, we’re going back to the good ‘ole days with a new updated look on top. 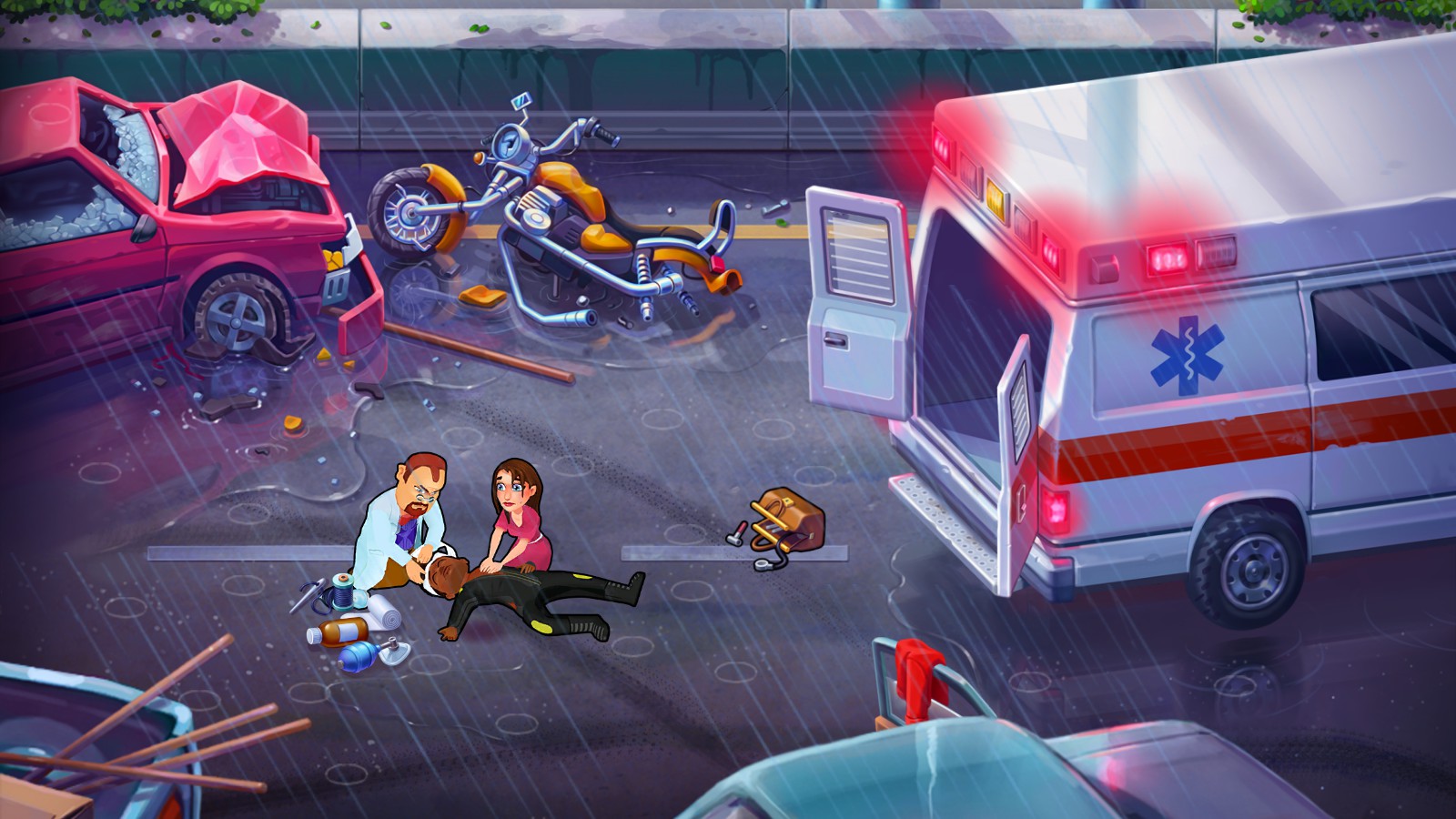 Heart’s Medicine – Season One Remastered takes us back to the beginnings of Allison Heart’s story. We open up to a tragic accident that occurred not too long ago when it was raining. One of the drivers is in critical condition with the doctor there, John, barely able to keep him alive long enough to take him to the hospital to get properly treated. Luckily, a young woman pulled over to help. This ends up being Allison Heart, our wonderful protagonist, and was the reason why she decided to become a doctor. Six years later, she’s taken residency at Little Creek Hospital, where John is the head of.

There are six chapters, with each having 10 levels and focusing on one specialty. You start in General Diagnosis assisting John, the Laboratory with Ruth, Pediatrics with Conner, Plastics with Robin, Prenatal with Chance, and ending back on Diagnosis acting as a first respond center with rotating supervisors. Each chapter also has a contained story with the overarching conflict being the needed change for the head of the hospital. Like the Pediatrics chapter includes a little girl getting inexplicable stomach cramps. 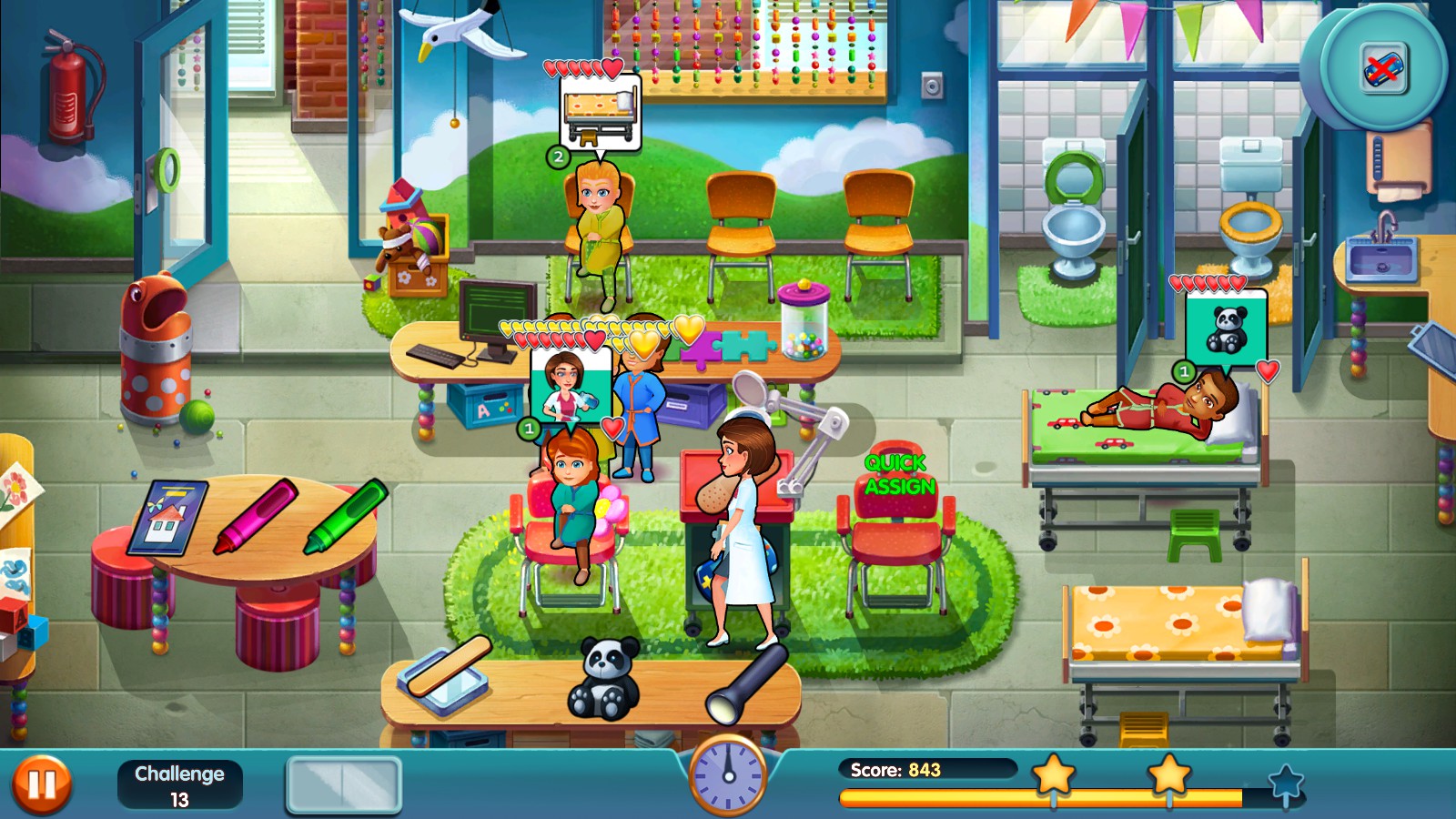 The gameplay Heart’s Medicine – Season One has is pretty easy to pick up, especially since it doesn’t really put that much emphasis on being fast. You’ll basically guide Allison to treat each patient that comes in during her shift. Once a patient comes in, you’ll know what station they need to be sent to and assign them to it if there’s a free spot. If not, you can send them to a station, in the first chapter it’s a water cooler, that stops their hearts from dropping. Once the patient makes it to the needed station, they’ll tell you what they need. There are different types of treatments and each require you to do something. Some will just require you to do a quick checkup and they’re done or require you to do an action like clicking or holding within the action circle. Others require you to pick up an item first (which some have infinite supply, some require you to restock them once in a while, and others requiring you to combine two or more items to make the needed one). Other patients will require you to do a minigame treatment. Each minigame is related to what specialty Allison is in. Like putting a Band-Aid on a little kid’s scratch or listening to a baby’s heartbeat. 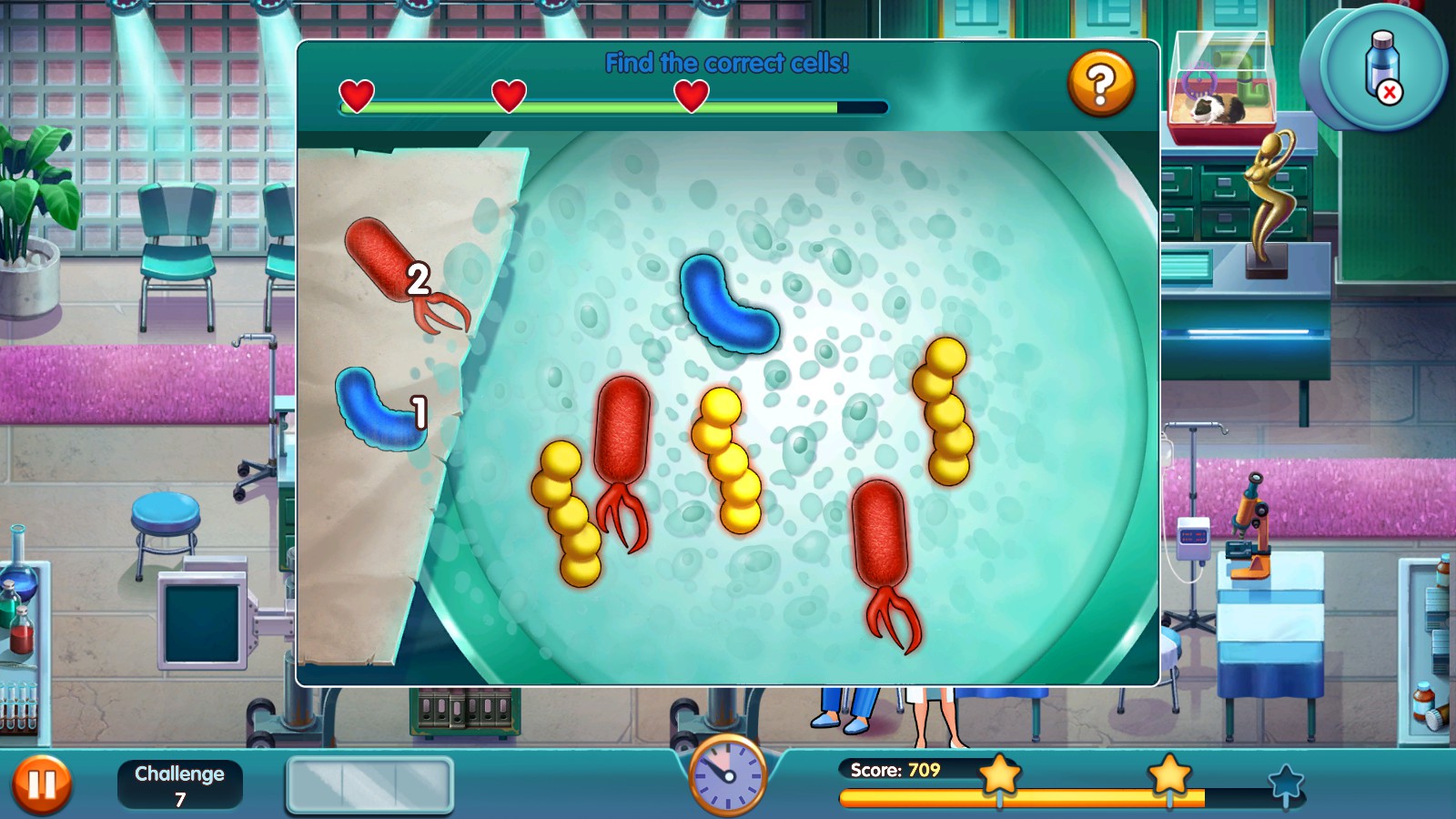 Once you finish up a patient’s treatment, they’ll go to checkout and wait till you check them out. This is where you’re score comes in. Each patient has hearts that not only tells you how many treatments they need (alongside a number telling you), but also translates to points. If you treat them quick enough on every step, they’ll arrive at the checkout counter with golden hearts. However, if you leave them be, their hearts will slowly deplete until they storm out. You do get points based on bonuses and combos as well. You get quick bonuses if you assign/treat patients quick enough, a bonus if you checkout multiple patients at one time, and a bonus when you find Oliver the guinea pig. 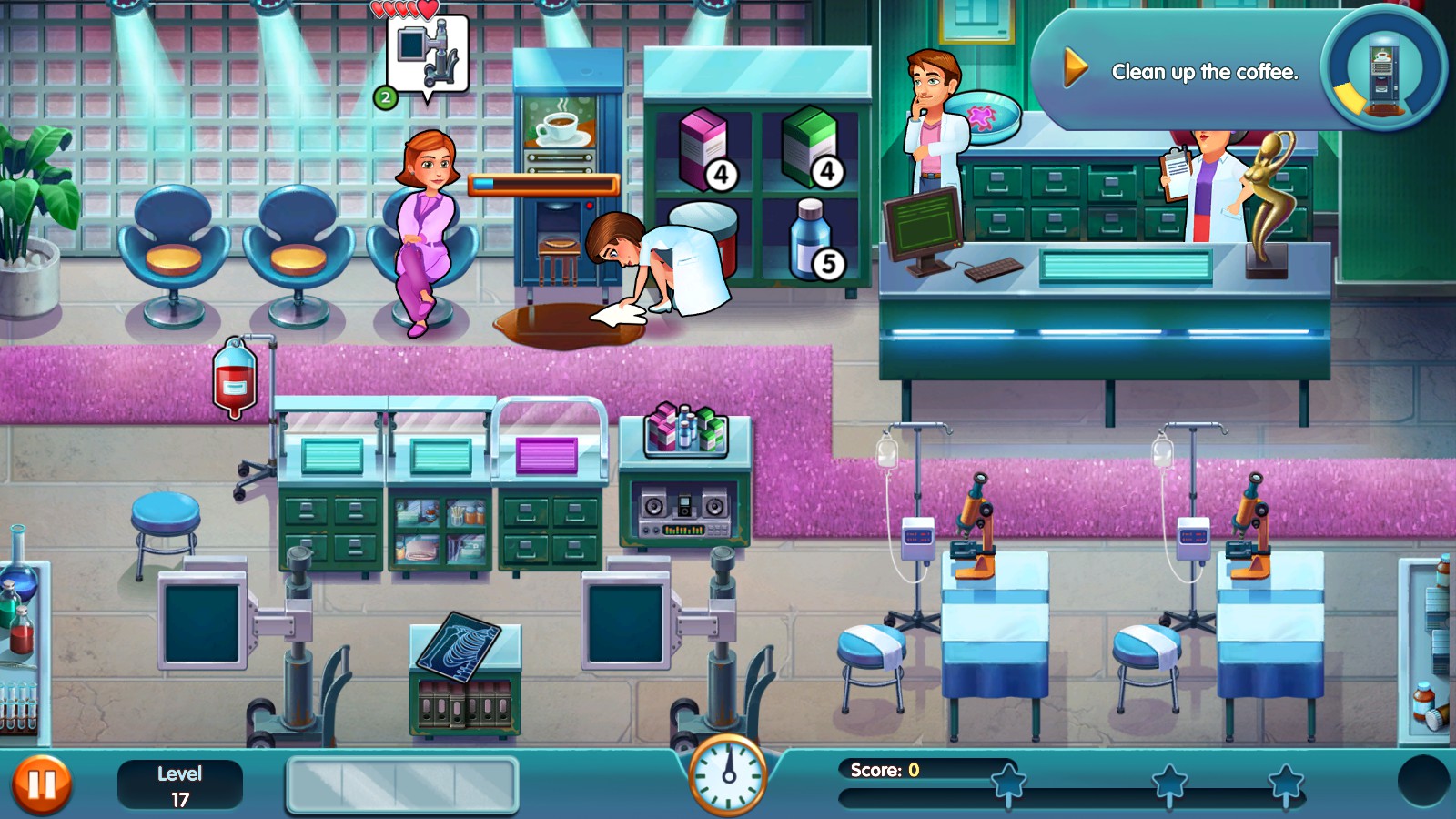 Each level also has a challenge attached. Challenges can be story based or just something random like not having more than one item in your inventory or not having anything run out of stock. In addition, there are dedicated challenge levels where you try to complete a level with a harder challenge. If you fail the challenge, you fail the level rather than being able to keep playing through it like with regular levels.

While you can’t unlock the next level without getting at least one star, why should you bother past that? Well achievements, but also it does help you out. Each star in story levels gives you coins that you can spend to upgrade a department so you can get another station or make it more comfortable for the patients. While challenges give you diamonds that you can use to buy decorations for Allison’s office.

It’s pretty much a given that if you like time management games, you’ll like Heart’s Medicine – Season One. It’s also a given that if you’re a fan of Gamehouse games, and specifically love the Heart’s Medicine series, you’ll definitely like this title. It’s going to be a bit weird if you’ve been playing the more recent ones, as most of the recent ones are more hectic than the old ones, but it’s still worth playing. I enjoyed my time with it and finally being able to play Allison’s first game since I do not have a gaming phone.