Bricks and molotovs fuel the change in this grim dystopian future. Against drones, cops, and all manner of wacky enemies nothing can withstand the onslaught of glass and stone from crowds of people who believe in the cause. It’s political, romantic… and you can use a chainsaw. 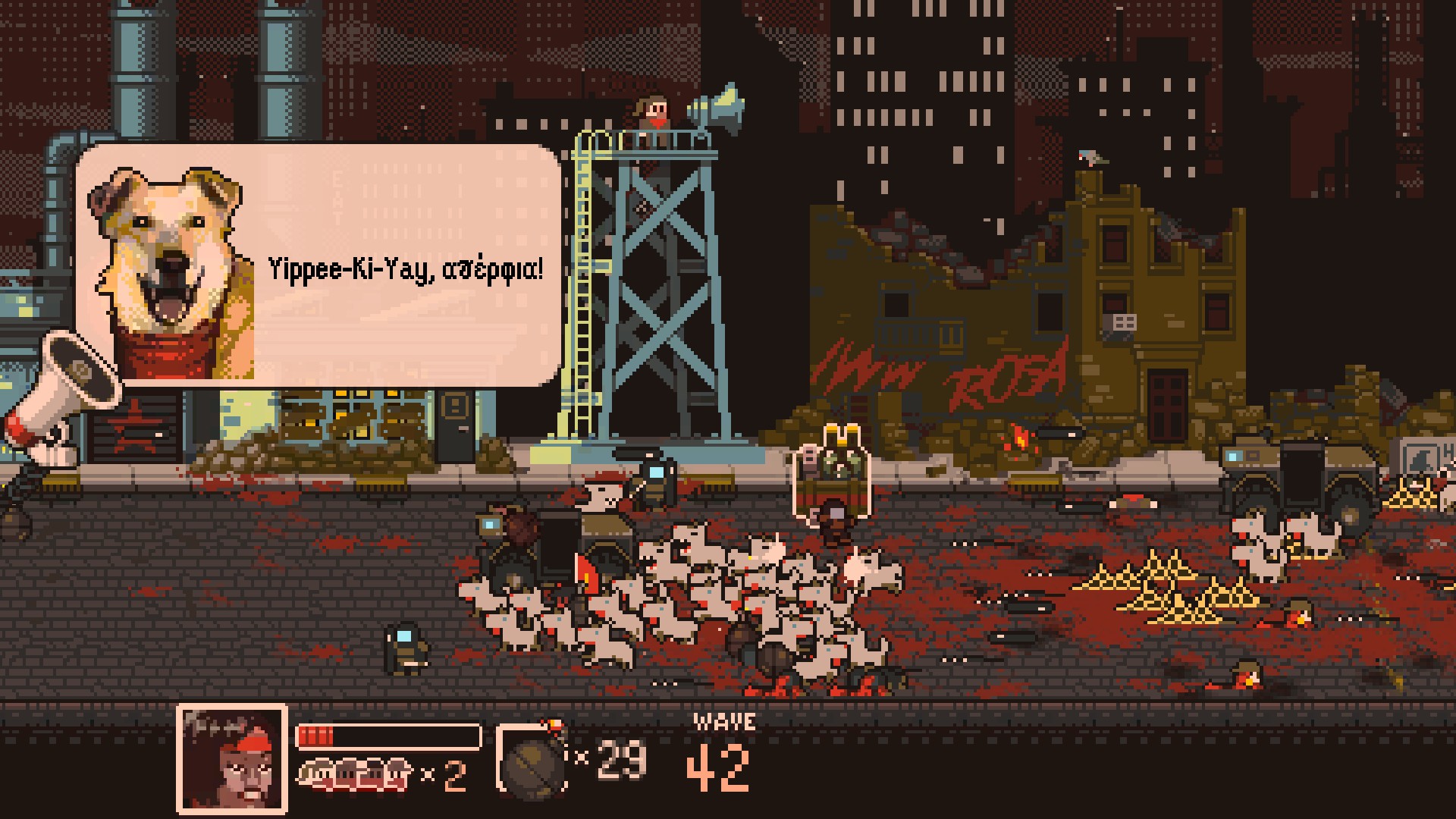 Who in Here Tryna Start a Riot?

Fighting shoulder to shoulder with your comrades is essential to overthrow the twisted capitalist rulers of the world. Brawling in Tonight we Riot consists of a single attack button, which can be melee or ranged depending on the weapon, and jumping. Despite this rather limited sounding combat system, it goes much deeper than that with the important feature of your crowd. 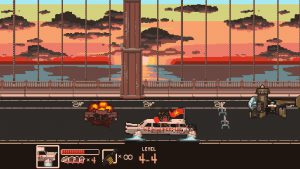 While you probably could beat every level in the game with a single revolutionary, that’s really not what this game is about. You begin each level with a tiny band of characters but you only directly control one. This leader has a health bar and can direct the other rioters to move or attack, and if the leader dies you automatically take control of another rioter. If you run out of people, it’s game over. 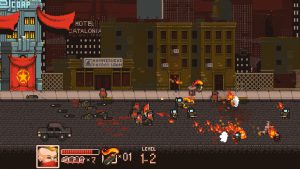 As you run through levels you can recruit more rioters. With the press of a button near a factory, you cause an uprising and get more people to join your party. Bolstering up your numbers can give you more backups in case your leader dies, but it’s also important for combat and unlocks. All thrown weapons are shared with the crowd, so if you pick up a pack of 20 bricks and have a party of 10, it only costs 1 brick for the whole party to send a storm of blocks hurtling towards your foes. You can guide your party to move to a certain area to avoid attacks, or direct the aim of the projectiles. 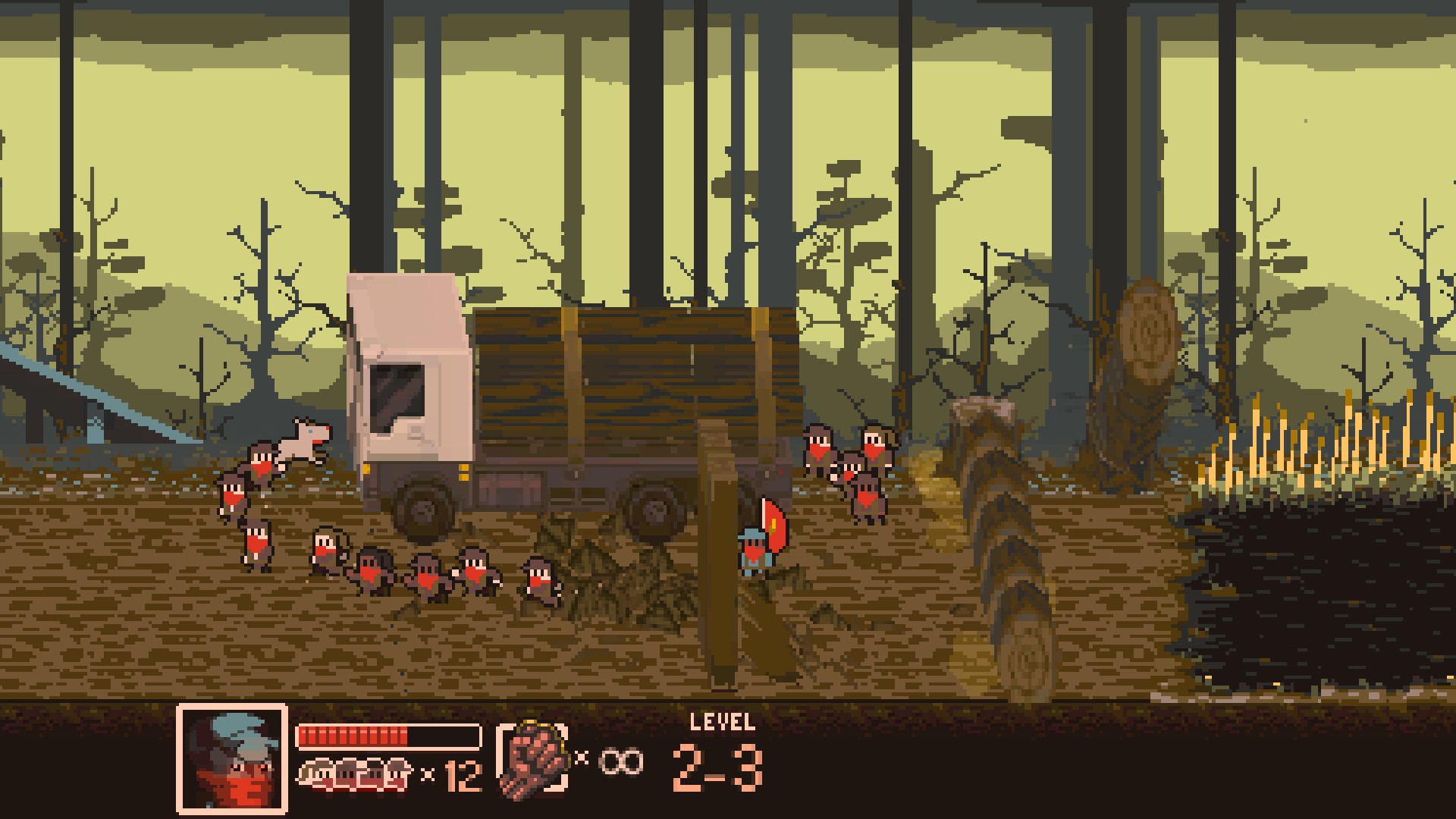 The Revolution Will Be Televised

Tonight We Riot is an interesting take on the arcade games that inspire it. It’s a bit different than more classic beat ‘em ups with no attacks to mix up or make combos, few pickups, no traditional scores, no grab moves and a heavy bit of politics. Instead, it almost feels like a strategy game: as lumberjacks cut down trees to decimate your numbers, spike traps litter the ground and bullets fly all around, it’s up to you as the leader to try to make sure the many survive.


In fact, if you want to experience the most that the game has to offer, you should be sure to keep as many revolutionaries alive as possible. Rather than chasing a score based on killing enemies, picking up food or the like, your ending score is based on how many rioters of yours survive the level. If the right amount survives you unlock weapons and upgrades for your leader and the crew. The melee weapons you unlock will only be wielded by the leader, but the various thrown weapons are shared and offer some utility like freezing or immobilizing enemies. Other unlocks include a bigger starting crew or increased defense. Part of the strategic element is figuring out the best way to dispose of foes. Often times just brute force won’t yield the best results.

This idea of trying to keep the many alive fits with the game’s message. Every level begins with a newspaper headline often describing something about the level and throwing in a political jab. There’s a lot of talk about the elite exploiting the working class and so on. Hazardous working conditions are highlighted in the portion of the dock of the world with shoddy construction and hazardous waste, and the newspaper caption for one of the levels states that everything is ok if they just don’t touch the red canisters. There is even one enemy type that you can convert to your side if you kill their leader, or rather you can liberate the many by beheading the greedy corporations that enslave them. 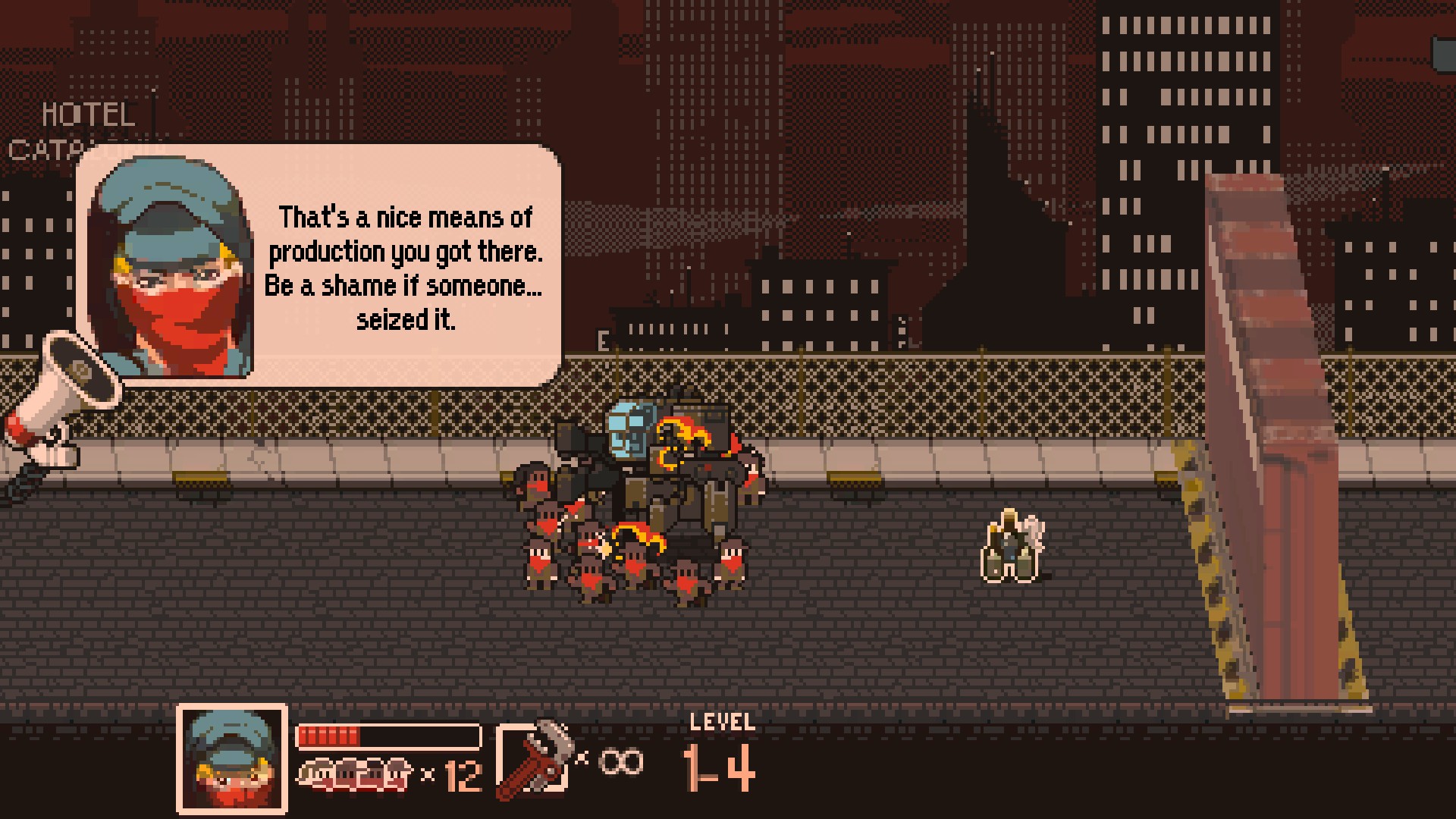 The most glaring thing missing from Tonight We Riot, is more of the same. The bulk of the game is fun: it’s satisfying on a strategic and action level. The boss and miniboss levels are a good challenge, and there are a few chase sequences to break up the game. Overall the pace is nice, but the game feels so short. I finished it in less than two hours, getting 3 stars on my first try for most levels. I went back to clean up and get 3 stars on the last few missions I needed to and then hit the endless mode, which isn’t really endless but a fun treat of developer commentary.

The tiniest complaint I can muster aside from the length is the weapon selection system. I often knew what weapon I wanted but I had to cycle through each tool in the middle of the action to get there, and then switch back and forth. This led to many of my squad dying as I tried to select the right tool for the job amidst the chaos. A weapon wheel might serve better. Or even just dividing weapons between thrown and melee, because a bulk of the melee weapons are not useful: once you get the chainsaw there is no reason to use fists or a wrench.

This is a bite-size strategy brawler mix, and I loved it. The humour, the cause, the gameplay. A lot of things about it fit. The soundtrack and art direction are well done, and the game as a whole is polished. But with all the neat tools and scenarios at your disposal, I wish there was more. It’s fun, but if we want to break the shackles of tyranny we need a sustained effort.