REVIEW: The Legend of Heroes: Trails of Cold Steel III

Become the foundation of the world yet again

When it comes to JRPGs on PC, or even just games being ported to it, there aren’t too many series more successful at it than Falcom’s The Legend of Heroes series, or more specifically the Trails subseries within it. There’s a staggering nine games in it so far, all apart of the same story, and as of this month six of them are available on the platform. The most recent, Trails of Cold Steel III, is the third game featuring the country of Erebonia and protagonist Rean Schwarzer. I covered the first game of these for Save or Quit and liked it a lot, while I was less happy about the second by the end. So, how is number three?

To start with I should say that this review will cover some spoilers for the first and second games. To that you may reply, “Well of course, it is the third game after all”, but I say that specifically because a claim with Cold Steel III is that it’s a game you can hop right into as a newcomer to the series. I can somewhat understand this, since the game does focus on several new characters and has a similar structure to Rean’s first game.

But in my opinion, I think anyone following this claim would be doing themselves a disservice. In theory you can catch up, but the way III lets you do this is via a database that summarizes every chapter from the first two games in a pretty sterile way that wouldn’t really be an adequate replacement. It also crucially only covers the games about Erebonia, with events taking place in other countries within the series being mentioned only in passing. Two characters from the Trails in the Sky games, for example, appear very early on, with Rean wondering who they are. If you haven’t played those games you won’t either, since they’re not in the database. So overall I would say if you are interested in these games to at least start with the first Trails of Cold Steel, which is also available on Steam and GoG. 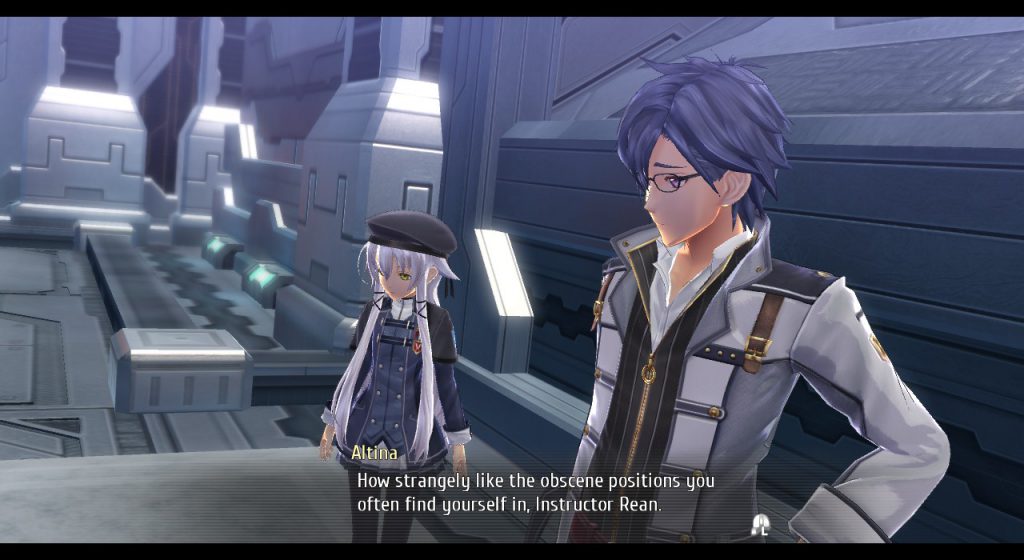 Anyway, Trails of Cold Steel III starts about a year and a half after the end of the second game. If you’ll remember at the end of that, Rean and the rest of Class VII put a stop to the civil war that had broken out around Erebonia between the country’s Nobles and the Reformist faction. Unfortunately just as this happened it was revealed that Chancellor Osborne, the leader of the latter, had faked being dead after his assassination at the end of last game, and now swooped in to reap the benefits of a scheme carried out by the Society of Ouroboros, the recurring antagonists of the whole Trails series. So while you did stop the war, you also let him get what he wanted, and a lot of this game is spent examining the ramifications of that.

You play as Rean who has graduated from Thors Military Academy and now takes on a position as an instructor at a branch academy with his own students. They’ll be serving as your new party members for the most part, since obviously all of Rean’s old classmates have gone their separate ways. This means that a lot of things from the first Trails of Cold Steel return – field missions that cap off chapters, being able to spend time with your party Persona-style to gain bonuses in battle, and a big dungeon on campus you make regular trips to. 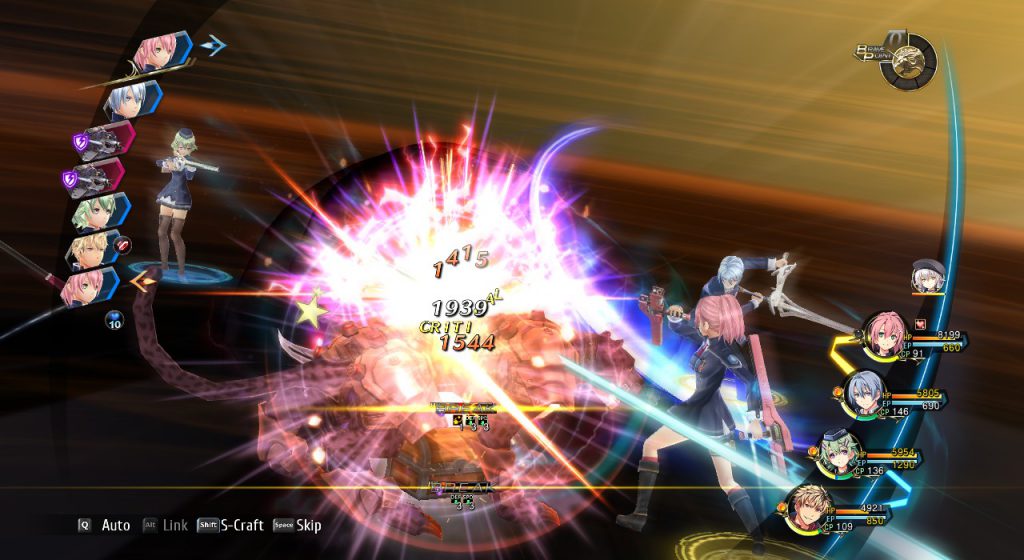 Gameplay-wise this game maintains the same formula as its predecessors – battles are turn-based with a set order, and movement is important for dodging attacks or repositioning yourself for buffs or healing. Like previous games, though, it does also build on that formula. One new addition is the Break bar, a meter every enemy, even bosses, has that gets chipped away along with their health. Get it to zero and that enemy is pushed back in the turn order, gets stunned for a turn, and is defenseless against your attacks. Certain attacks deal more damage to the bar than others, which can get interesting for boss fights, since pulling it off can really give you some breathing room.

Orders are also new: party-wide buffs that each party member has at least one of (Rean for me has three at the moment, MC privileges being what they are). They run off the same resource as your party’s co-op attacks and give bonuses like damage reduction, instantaneous casting of Orbal Arts, and so on. These can be used without giving up a turn and can be swapped for another at any time if you’ve got the resources, which does feel nice and convenient.

Now, one thing I should mention about this game is that it’s under new management. This is the first Trails game published by NISA after picking up the rights from Falcom, whereas the others had been handled by XSeed. You might remember that NISA also acquired the rights for the Ys franchise, Falcom’s other big name, and that their work on its latest game, well, didn’t exactly give them the best first impression, thanks to a spotty translation and a flawed port. These problems were ironed out with patches, but it still remained a sore spot for some. 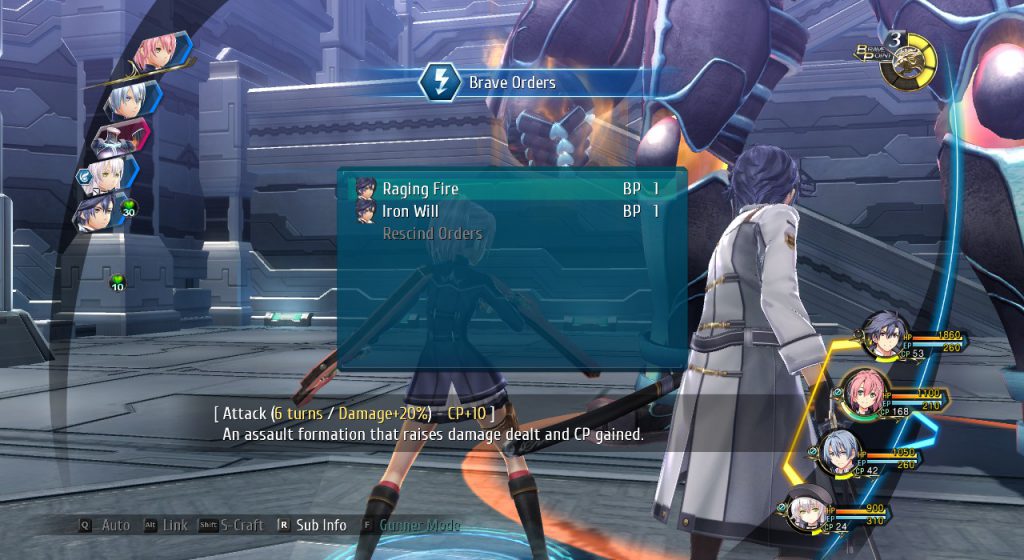 But whether because of this reaction or not, NISA did seem to realize the fanbase that had gathered thanks to the Trails games having very solid translations wouldn’t tolerate them coming in this late and putting out a half-hearted effort in that regard. Translators from XSeed who had worked on the games were contracted to keep III consistent with the others, and voice actors were brought back to reprise their roles. I was a bit apprehensive about it, but I think they did a good job living up to that standard.

As far as the port itself goes you’ll be pleased to know Durante was called back to work on this one as well, working his typical magic and producing a PC version with a host of options to accommodate a wide range of computers. This includes Turbo Mode, thankfully. Like with the translation I haven’t felt disappointed, and the one problem I did have was patched out.

Overall I’ve been quite pleased with this patch and the game, which is looking like it will address my issues with the second game. The only flaw I can point to is that it’s a bit of a slow burn at the start compared to the second game, since it needs to introduce new characters and re-establish the plot. But if you have much experience with the Trails games that probably won’t be much of an issue. I give it a happy Save.