A solid Act 1 to introduce this unique game. Here’s hoping the rest lives up to this introduction.

This build of Alder’s Blood only had a small chunk of the game (with a pretty wide range of mechanics and gameplay to show) so I can’t discuss the story, endgame content and overall progression with much clarity, however, I’m glad to say Alder’s Blood is most definitely worth an eye on for the next few months until its planned Q1 2020 release date.

The gameplay is quite unique overall, with a twist on a “traditional XCOM” turn-based combat formula, thanks to the addition of a strong stealth component. The story and lore (which should be plentiful – there’s even a codex!) are quite supernatural and have quite an interesting take on the traditional men vs. beasts world-building. 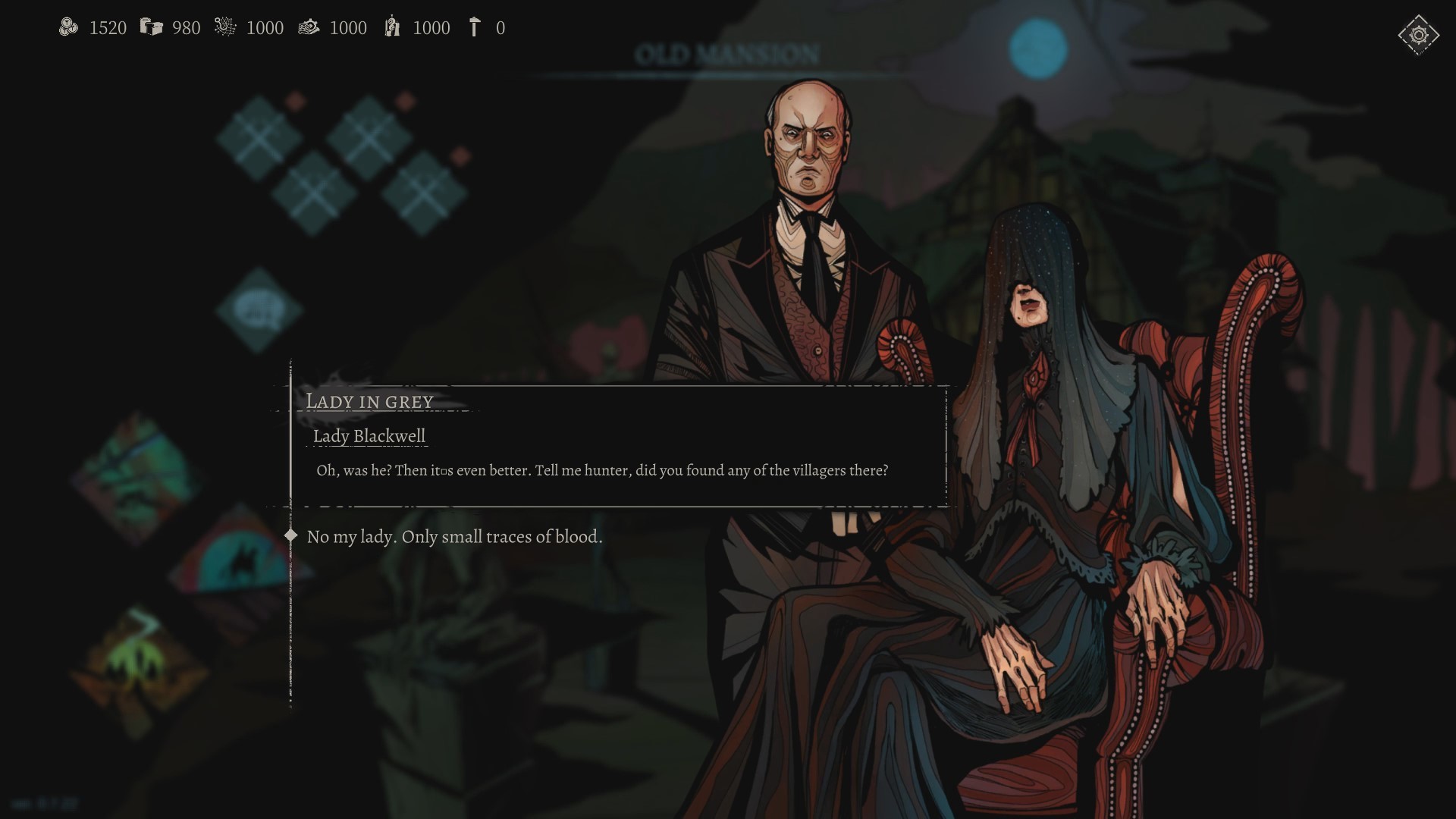 You’re a Hunter named Duke, the only character you’ll control in the tutorial, a section that introduces you to the game’s turn-based mechanics (where movement and actions depend on a stamina stat), with stealth elements useful to fight the beasts which are far stronger than you – avoiding group fights is very desirable and even some 1 on 1 or 2 on 1 fights should be avoided. Hiding in bushed will be the first recommended tactic and even that isn’t fully safe: moving to hiding spots can make you detected and even once you reach that spot you need to take the wind into account as your scent can be detected by the enemy thanks to the wind.

Yeah… scent matters. That’s honestly an awesome feature that makes the game feel more tense and original – you can be safe in a round and if the wind changes, you can be screwed if a Brawler picks up your scent, added a great deal of unpredictability that adds a new layer of depth to the encounters.

As Duke escapes the encounter with a plethora of beasts, the game cuts to the rest of his supposed party of Hunters, aware of his escape too late and unaware of his whereabouts…

And so your party and their quest to find Duke begins (with a lot of questing and world-saving throw in there for good measure). It’s quite an intriguing start that makes you keep going and fighting for a better world than the desperate and bleak one you’re introduced to.

The gameplay is, as I said, very XCOM based with a great deal of stealth mixed in to ensure your squad survives – outnumbered and underpowered, you need to hunt from the shadows instead of charging head-on (something that may change with progression and how you can build your Hunters). Managing your stamina is important as it’s a resource for every encounter action you make – from movement to slashing with your sword to shooting your shotgun, you must take stamina into account in order to avoid situations where you may need to escape or hide from a suspecting enemy.
Both hunters and enemies such as Shriekers or Brawlers have resistances, types of attacks (in case of hunters, types of attack depend on the action and the equipped weapon) and passive abilities that alter some of their combat abilities/actions (moving slower but having more item slots or more stamina, more health, etc.), adding a nice layer of depth to the combat encounters where you must take into account all these stats and abilities to maximize your damage to the enemy and resource consumption as well as minimize incoming damage and consequently, minimize Hunter deaths. 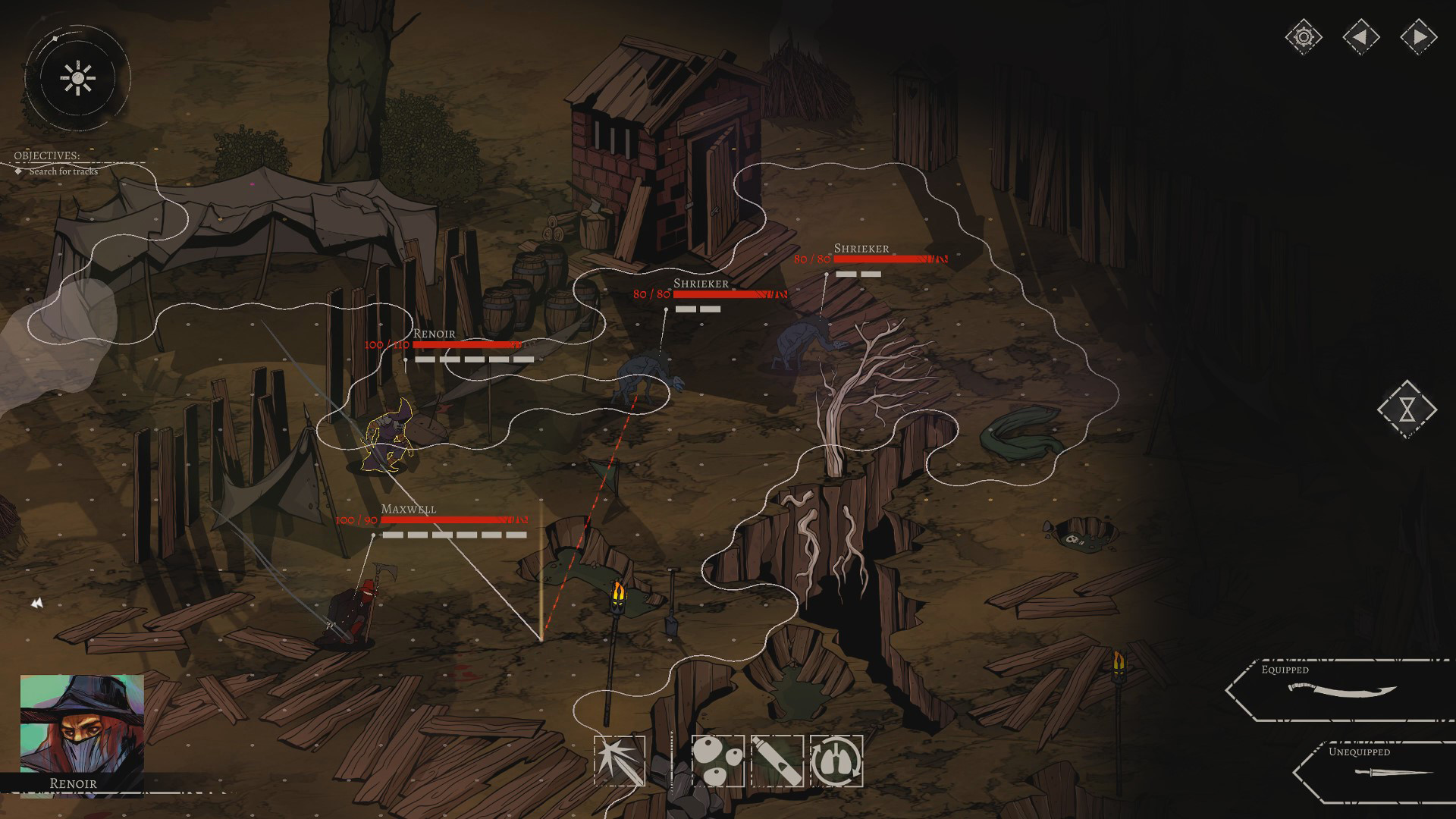 As far as issues go, pathfinding is far from perfect and some feedback on whether I can be spotted during a movement action would be great – as is, you need to check every node/hex you cross during that movement to check if you’re spotted mid-traversal or not.

But combat isn’t everything and Alder’s Blood has a grid-based, open-world map where every node is a place of interest where you can visit, shop and talk around (all done through an interactive background, you can’t actually move around those places, only between them and consuming resources such as food during those travels) as well as camp.
Setting camp allows you to manage your party – upgrade hunters thus adding more abilities, crafting new and better weapons, resting to restore health, sacrificing (basically killing) a hunter for the betterment of another hunter and managing the camp overall – all these activities require hunters to be assigned to each (crafting, resting, etc.) so adding a hunter or two to watch the camp during the night is a good idea to avoid ambushes. 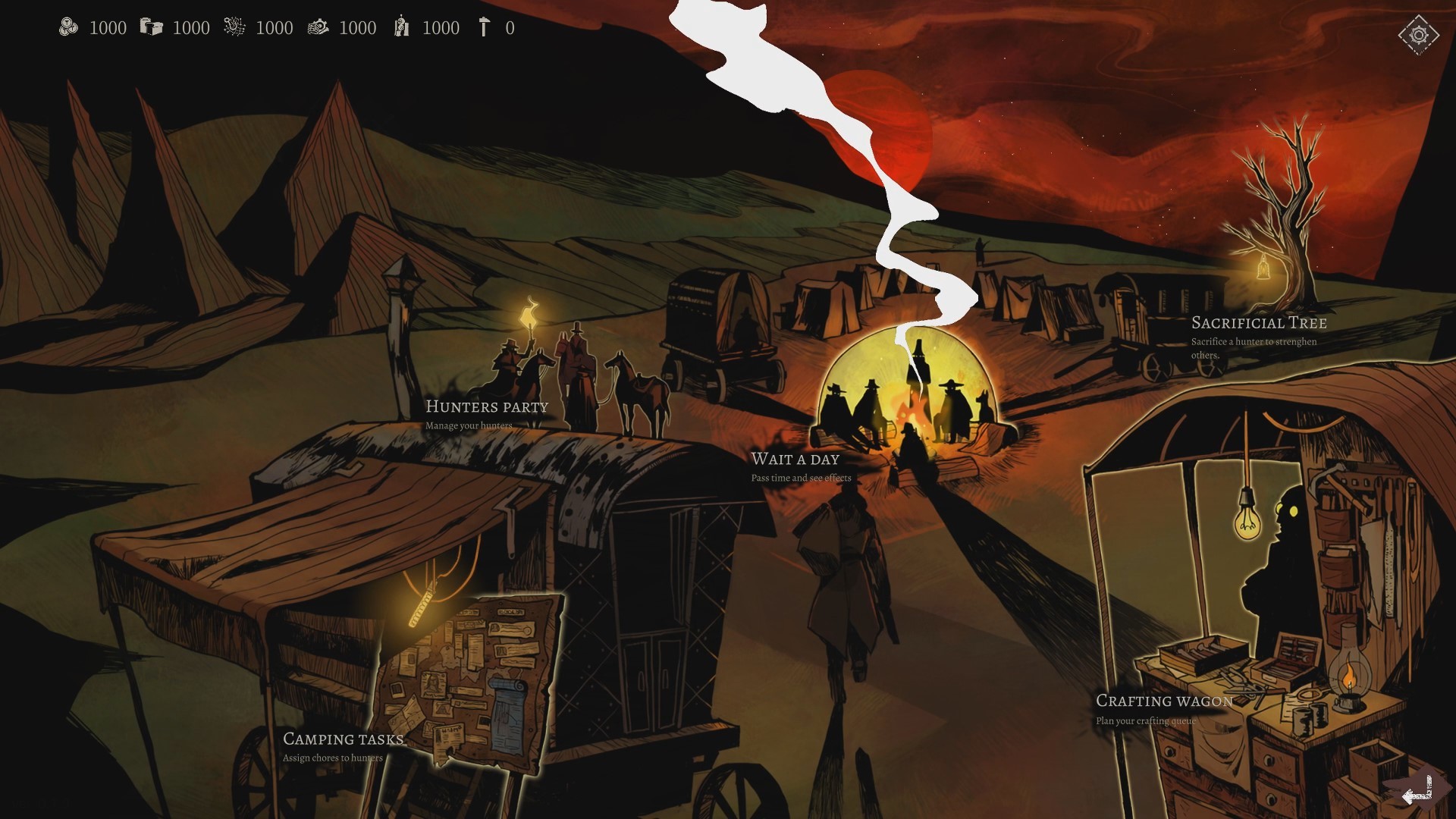 There’s a great deal of management involved outside of combat as you can see, making the game feel like an adventure (this is also enhanced through its interesting lore and plot) and not a sequence of combat encounters you must finish to reach the ending (which is absent as only the Act 1 was avaliable in this build of the game).

Made on the unity engine, with a highly stylized aesthetic, Alder’s Blood is a joy to look at, with a brown and bleak color palette mixed with a comic-book-like character design and overall presentation. The performance is as great as it looks and makes the combat and conversation play great with little to no technical issues worth mentioning. The UI could use some work as some of the mouse interactivity seems a bit off, especially during melee attacks – you must select the attack button, then the enemy and then the position around him you want to attack from and even in situations where your character in near the enemy, picking your Hunter to stay in his position and attack seemed very unresponsive and ended up moving an unnecessary hex to attack, possibly screwing my stealth attack. It’s a small yet noticeable gripe I must point out.
Some UI prompts also aren’t clear, the return button is a bit too small and hidden, some camp prompts could be clearer and the overhead map could make the Travel Confirmation button a bit clearer (possibly centered on the screen). The combat UI is pretty great, though, which is much appreciated. 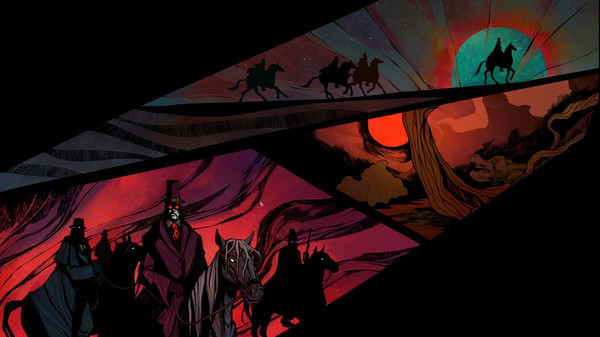 Music is quite minimal but gets the job done, I wish there were more tracks and not just ambient sound during some combat encounters to enhance both the tense feel of the stealth sections and the heart-pounding action of the combat.

Alder’s Blood is an easy recommendation to keep an eye on as I previously said. The combat seems solid and the overall presentation is slick which paired with solid writing and good progression makes for Act 1 a fantastic introduction to this indie game. The only fear I have is some sort of punishingly bad progression design for your Hunters, an overly linear story or worse yet, repetitive gameplay – Act 1 was solid but not all of it can play exactly like it. Introducing new cities to explore, more enemies and weapons will surely help minimize any future repetition it may has but as it stands, Alder’s Blood gave me a great introduction to it and I look forward to see more of it in the future.