It’s the Mortal Kombat of nudity!

Stripper Anya 2: X-MiGuFighters (or X-MiGuFighters: Stripper Anya, as it’s called in my library) is basically what I’d imagine Mortal Kombat (the first one) would have been over 25 years ago had the developers then decided to try to shock the world with nudity instead of over-the-top gore and violence.

The second game featuring the titular (titular, haha!) character from indie developers, X-MiGuPlay, LLC, X-MiGuFighters drops the Double-Dragon-esque beat-’em-up style of Stripper Anya: Demon Slayer for the traditional one-on-one, side-on fighter setup used by Mortal Kombat, Street Fighter, and countless other stage-based fighters. And it does so with its tongue rather firmly in its cheek. 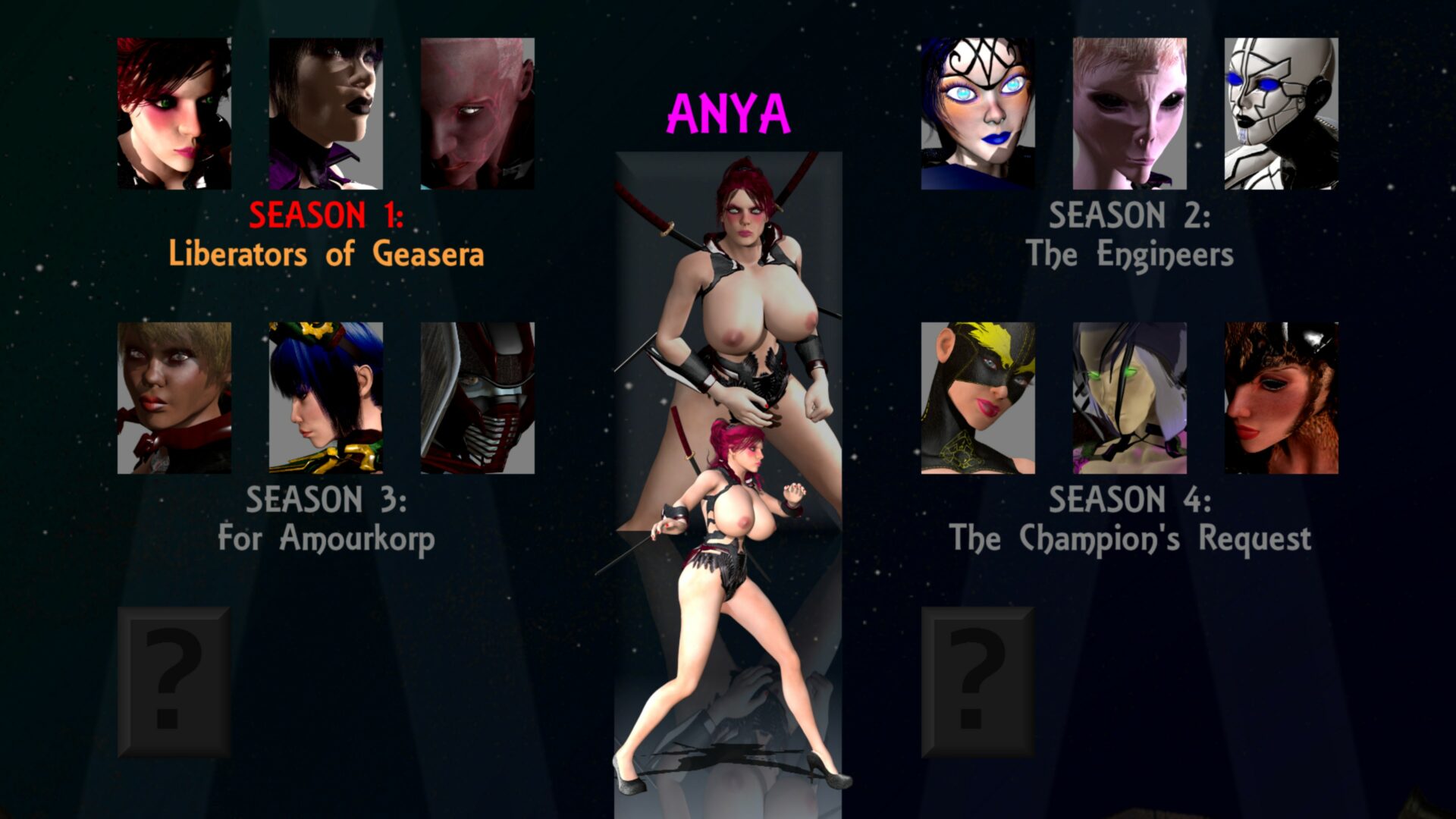 You see, this game plays more like Mortal Kombat than any other game I’ve played. There’s the obvious shock factor — in MK’s case it was violence and fatalities, whereas here it’s ginormous jiggling breasts — but as well as that the characters just seem to move almost exactly as they did in the first Mortal Kombat: fast, slightly wonky animations, as if there aren’t quite enough frames or they’re played at a slightly incorrect speed. Even the look of the characters themselves is similar to me: high-res models superimposed over not-quite-similar-looking backgrounds. Sure, the characters here are 3D rendered and not digitised-video-based characters, but the effect on the overall look and feel of the game is the same as it was with Liu Kang or Raiden in 1992. And the ability to win a battle by spamming one attack is here, too! 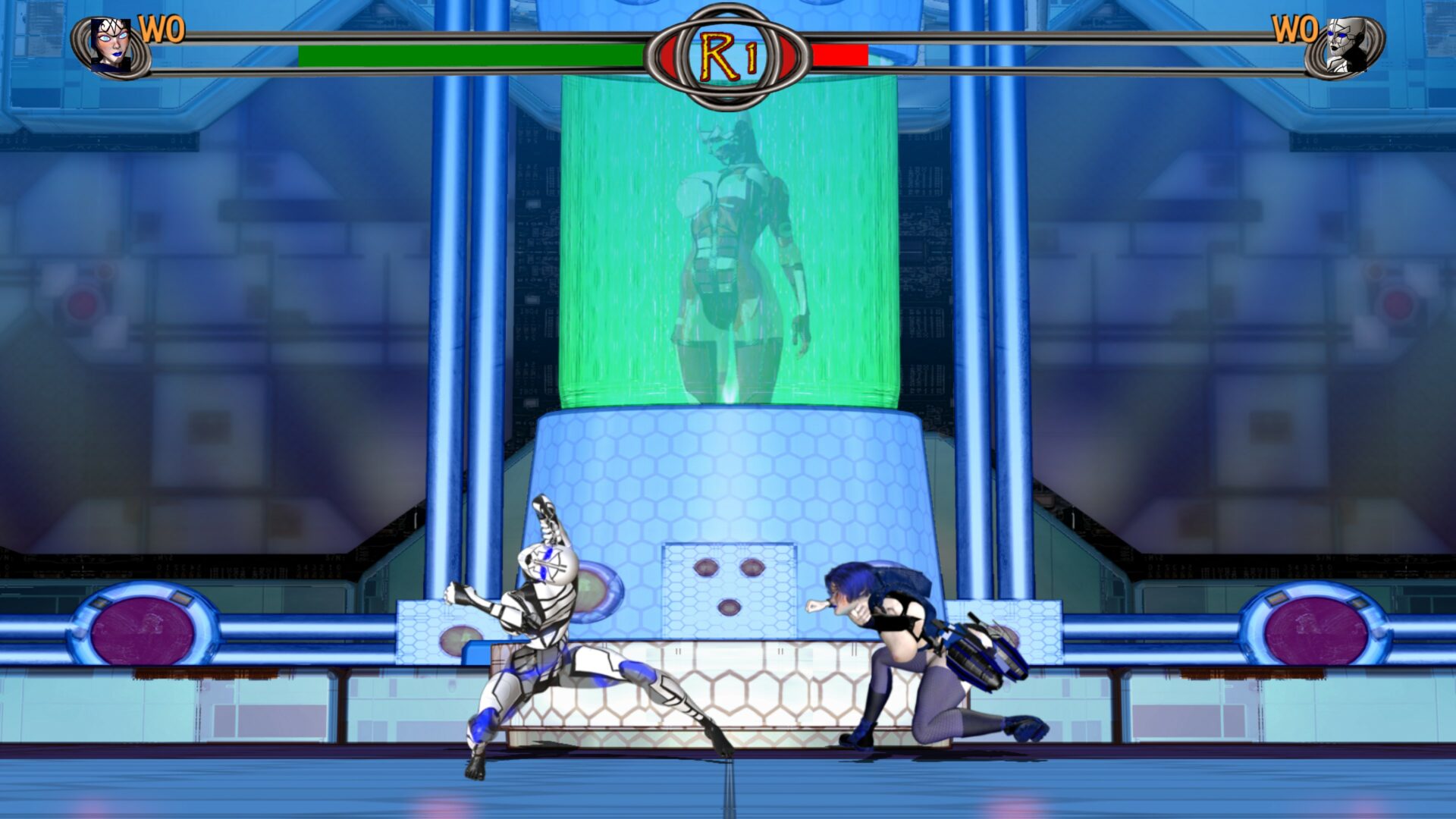 Though I haven’t actually asked the developer this, if I were a betting man I’d be willing to put money on this being deliberate. The developer has said publicly that the game deliberately tries to capture the feeling and appeal of retro fighters, and I think the original MK would have to have featured heavily in his mind during development.

Unfortunately, though, in a gameplay comparison of the two games X-MiGuFighters would have to come out on the bottom; the variation in fighting styles and special moves is just too good a benefit to ignore in Mortal Kombat, and the fatalities will always hold a special place in any early ’90s arcade gamer’s heart. But for an independent developer writing a fighter using Game Maker, X-MiGuPlay has done a good job of emulating the feel of one of the kings of the genre.

Hmm, come to think of it, it’s a shame X-MiGuFighters doesn’t have clothing fatalities or something like that. Maybe in the sequel … .

As with all fighters from the 90s, the story is basically an excuse for the violence (and in this case, nudity). It’s some crazy stuff, though, and basically continues on from Stripper Anya: Demon Slayer, though the game is a different genre. It provides a very good excuse for showing lots of flesh, in any case. 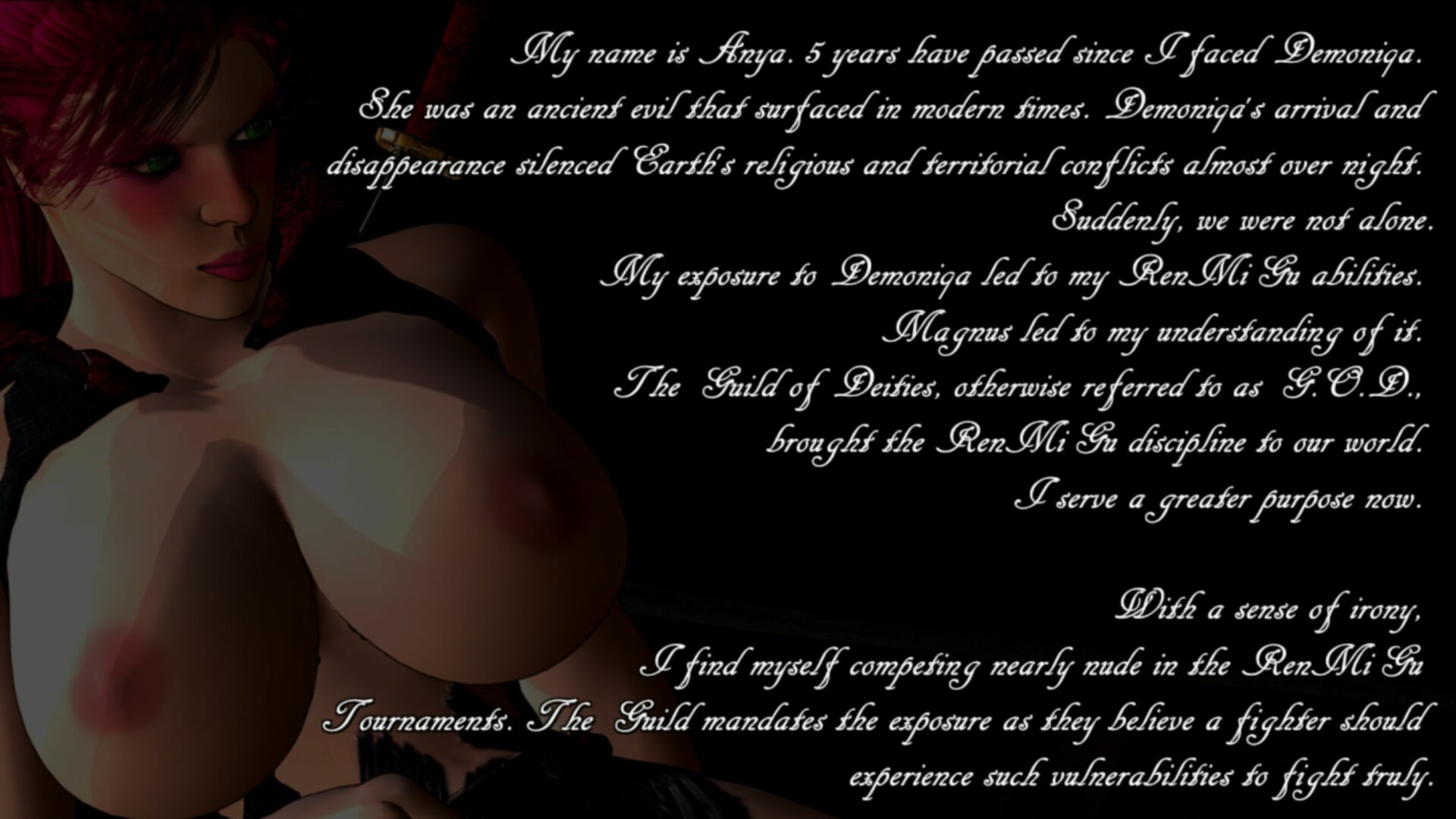 And so, each season of Story Mode (there are six in total) features a little visual-novel rendered introduction (complete with animated boobies, where appropriate) and then a sequence of up to just over 10 one-on-one battles against other Ren Mi Gu practitioners, with each of the female characters featuring very limited clothing that leaves the breasts free to move about distractingly and the male characters happy to have their tackle flopping about in the breeze. These are interspersed with static gloat and fighter image screens, showing portraits of the combatants, before the final visual-novel-style rendered sequence plays. The script is hilarious. 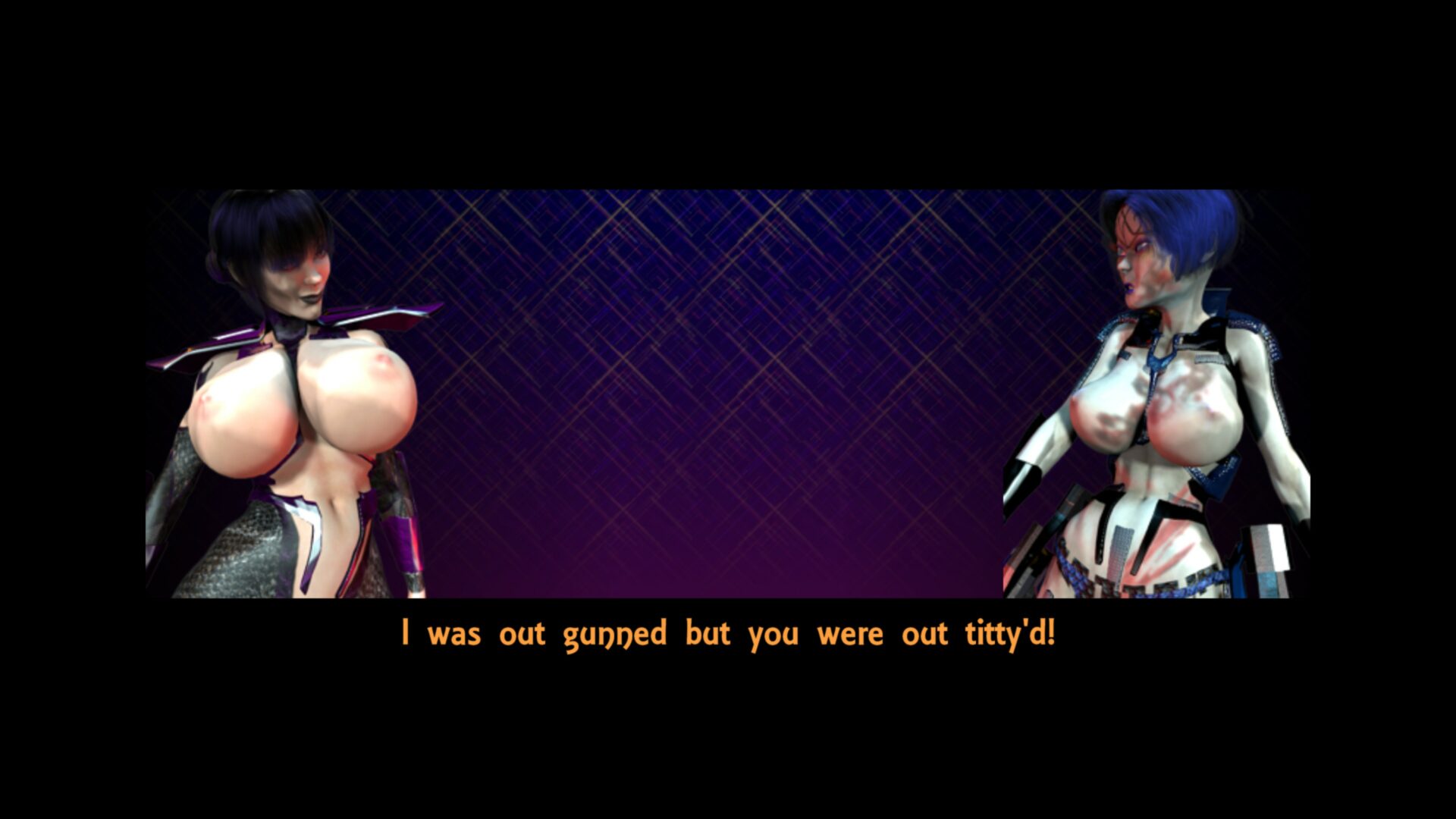 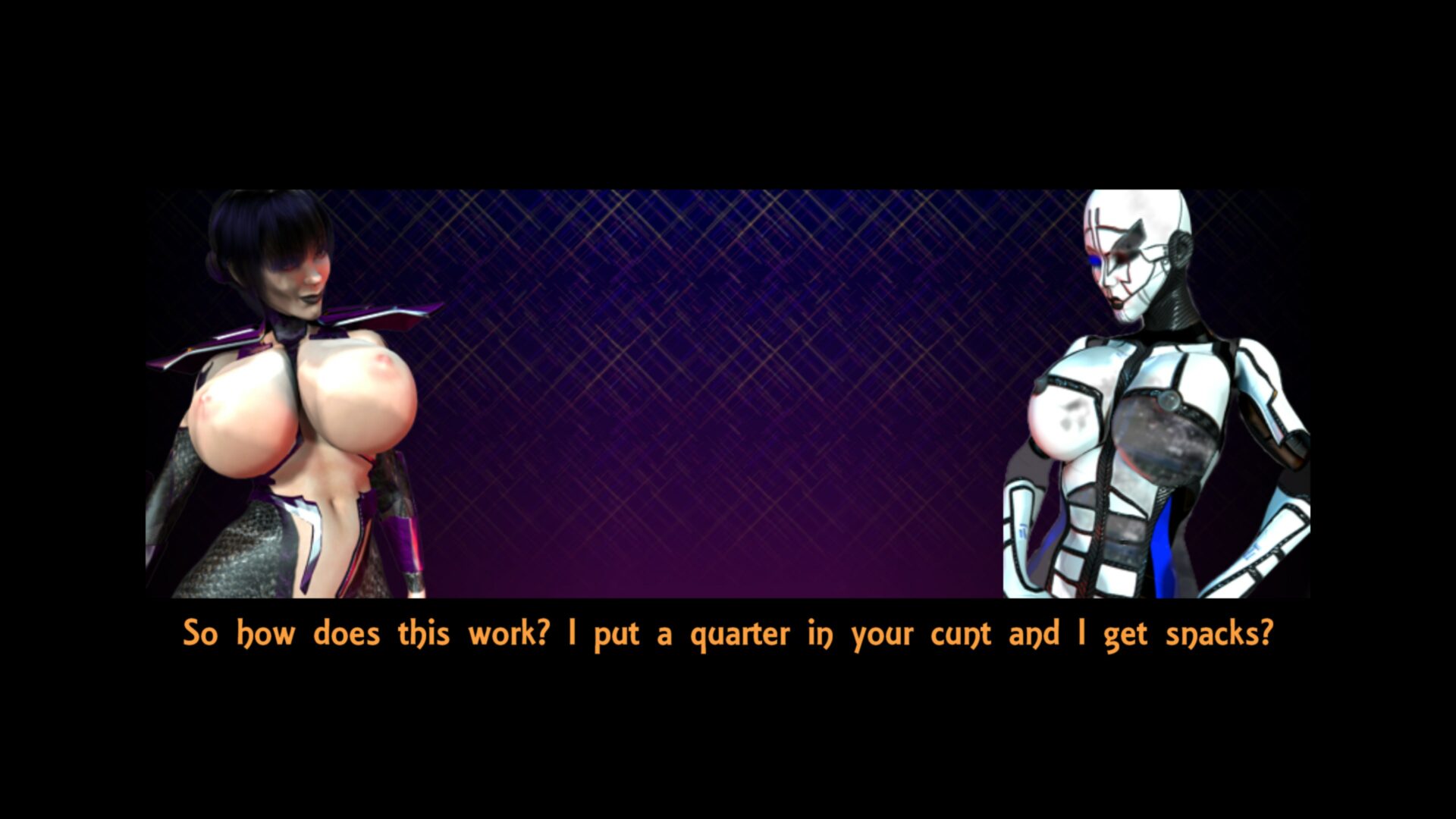 Other game modes include one- and two-player (local) versus modes, which simply let you battle between any two unlocked characters on a stage of your choosing, and a very basic tutorial mode. There are 14 playable characters, with three available from the beginning and others unlocked gradually as you complete each season of Story Mode.

The core gameplay — the fighting itself — is actually not bad. It feels a bit clunky at times, but so does the source material. Full controller support is included and it’s fairly generous with button timing and animation frames, and while the graphics occasionally look a bit iffy as far as determining hits visually is concerned, the movement and hit detection are actually really solid underneath; I haven’t found myself cursing the game in that regard at all. 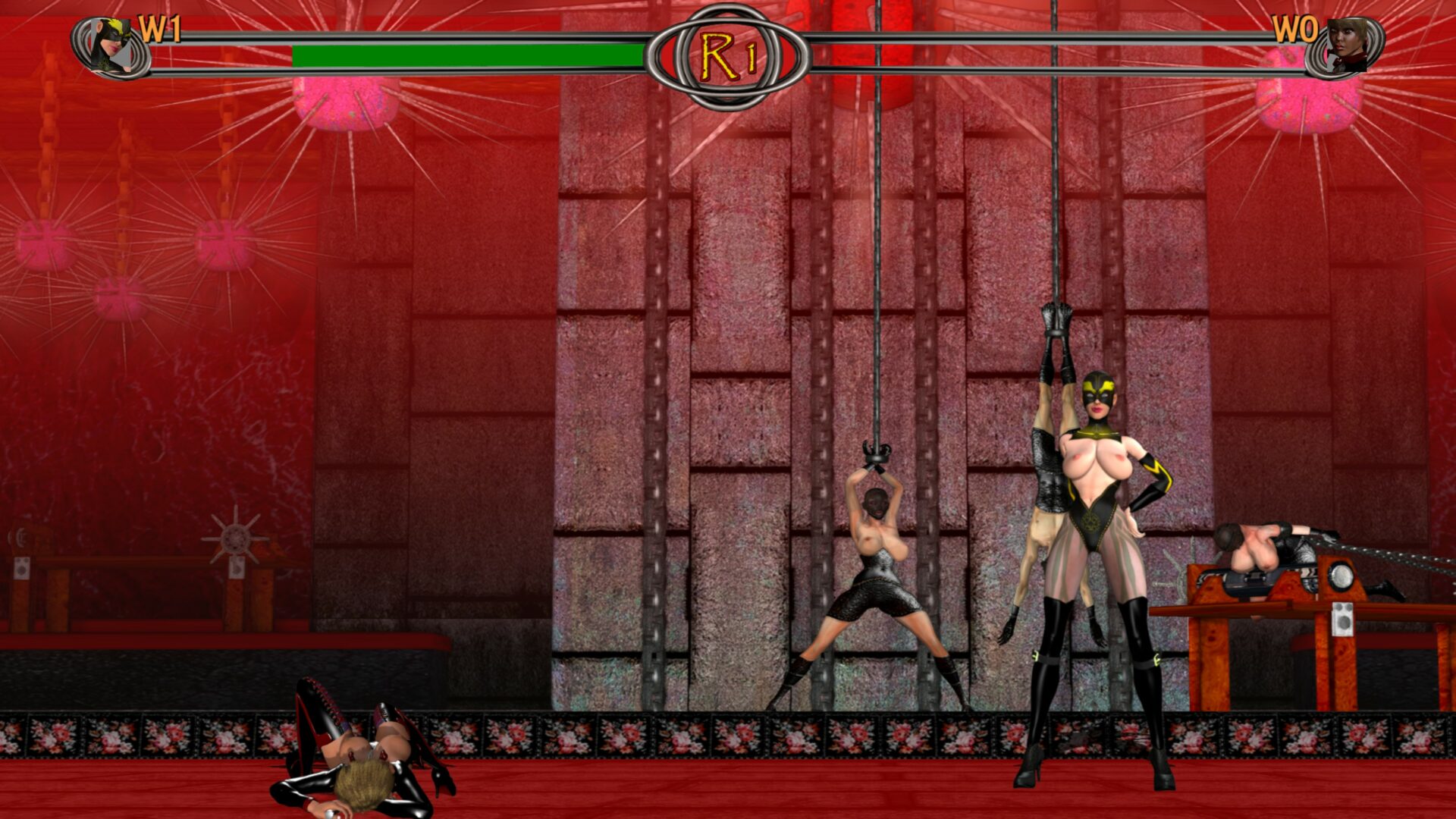 As I alluded to earlier, it’s easy to win Story Mode by spamming one attack. For me it was down-forward-quarter-circle (the fireball attack), but I noticed some other reviews mentioning that they used a simple punch or kick. In some ways, though, that’s actually okay. I mean, you don’t _have_ to play like that, but the option’s there if you just want to get through a fight quickly, the same way you could jump-punch your way through Mortal Kombat if you knew the timing.

The lack of variation in character moves is a big negative in this regard, though, as every battle does end up feeling a lot like every other one. Different characters can have vastly different speed, damage, and reach, and the differences in height add a little bit of variation, but it’s just not quite enough to make the characters feel truly different. If I had a local friend who I could play with I’d get a bit more out of it, but for single player, after I’ve played through Story Mode with each of the characters, I think I’ll probably go back to DoA 5 (with outfit mods, of course). 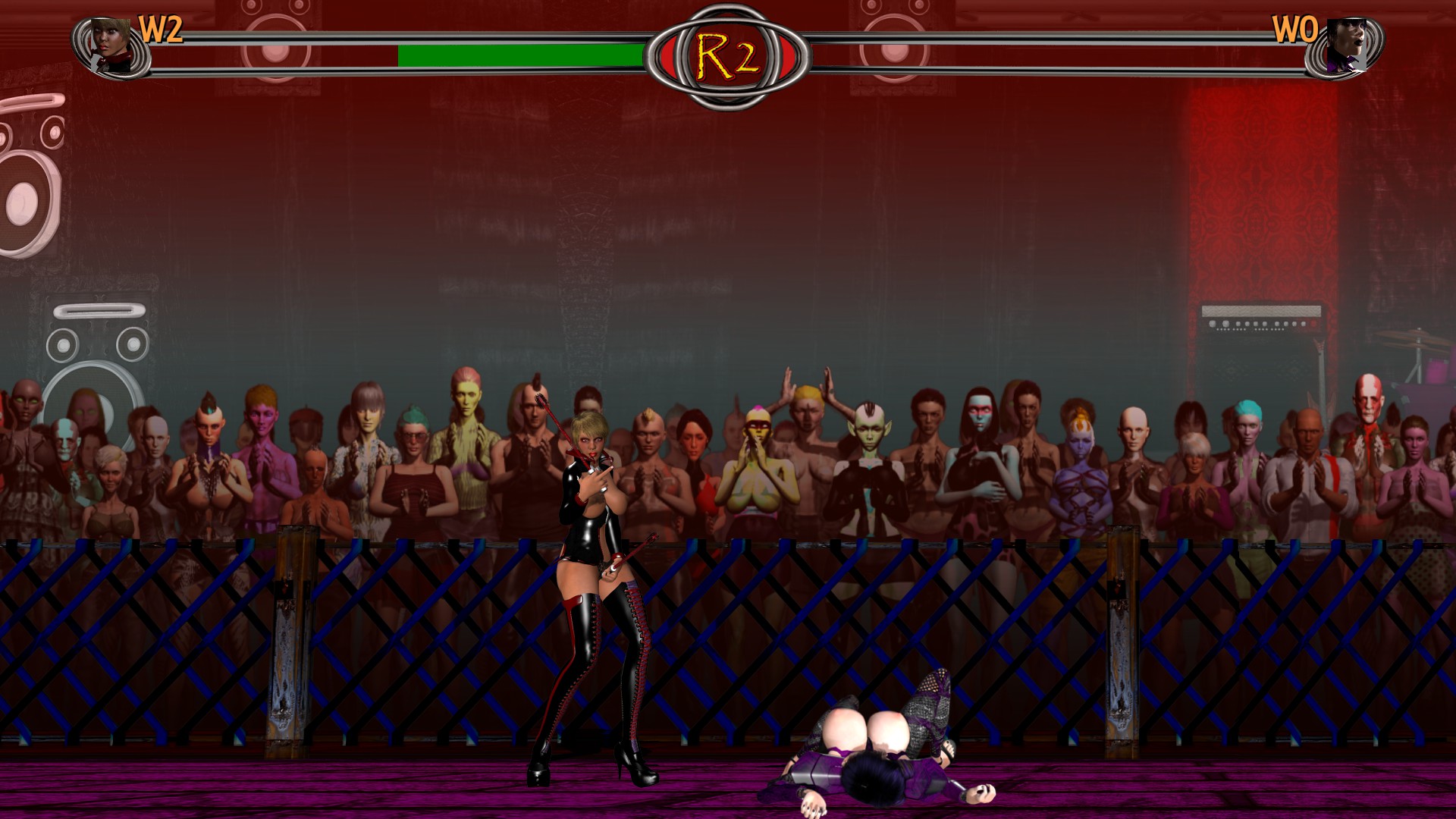 In traditional side-on fighter style, each stage is made up of a couple of background layers — when you play with high detail enabled, one of them is sometimes animated with moving spectators or other points of interest — with the two fighters involved in the battle fighting in front of all the background layers. There’s no interaction with the scenery or anything fancy like that, and the backgrounds vary greatly in appearance, interest, and image quality. Each character has a “home level”, where you’ll always end up fighting against them, and I think the only variation you’ll see for any given level are the differences between low and high detail.

The characters themselves appear to be large 2D sprites created from 3D models, or at least that’s my guess. They move a bit weirdly at times — the retro animation effect, I’d assume — but are mostly animated quite well within that context. There’s a pretty crazy range of characters, from Anya, the huge-breasted Human stripper of the title, through an android, two freakish male characters, a scarily tall grasshopper-like woman, and more. The game also features what I think is the most hideously ugly topless woman I’ve ever seen anywhere: Mordvivana. *shudder* 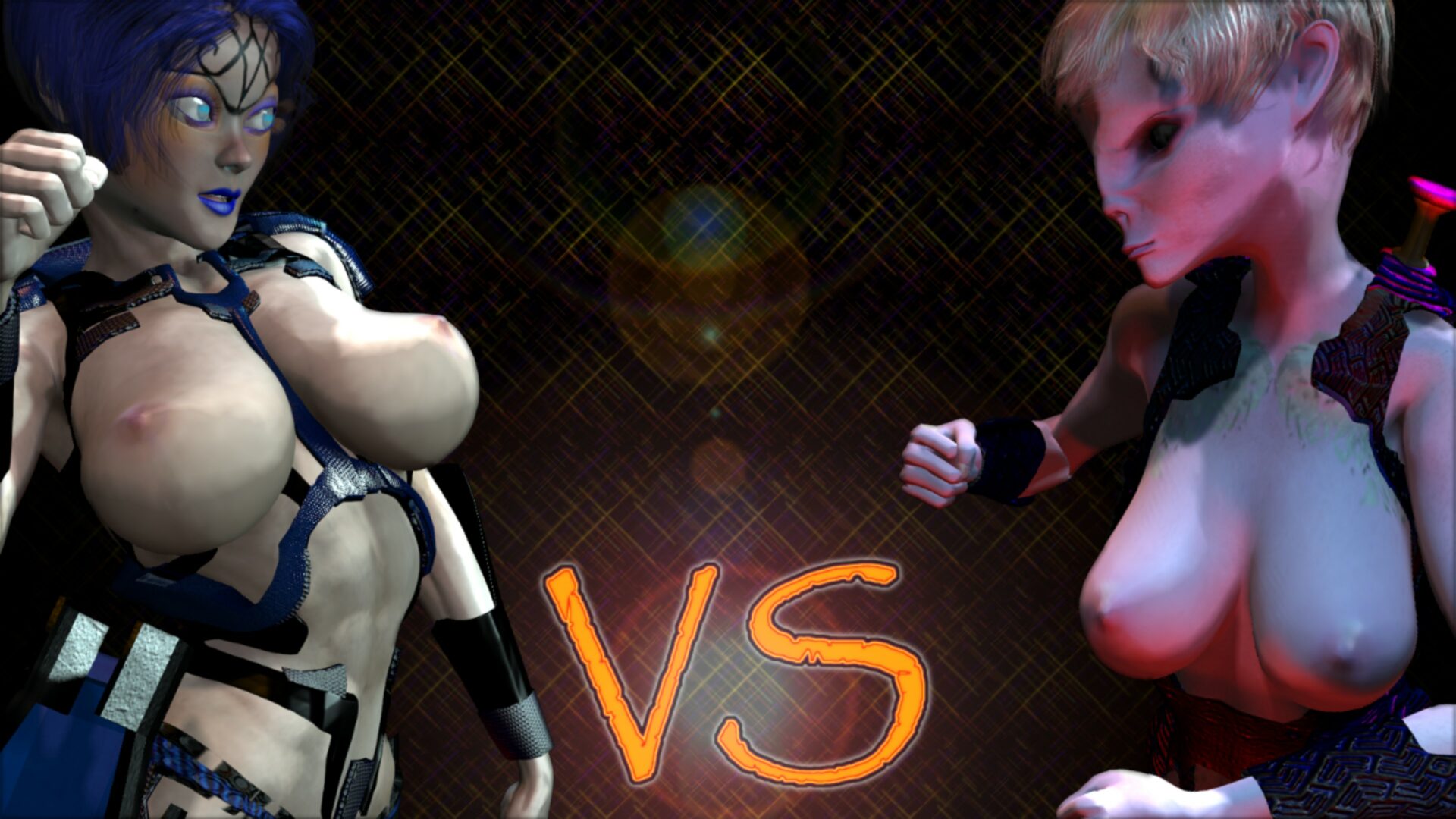 Special effects are large and freakish, with fireballs turning the whole screen crazy colours at times, and some attacks leaving rather large blood splatters. Once again, it reminds me of nothing more than the original Mortal Kombat in this regard. Jiggle is much more prevalent than anything I ever saw in traditional fighting games from the ’90s, but that’s okay with me! (Let’s just call it poetic license.) 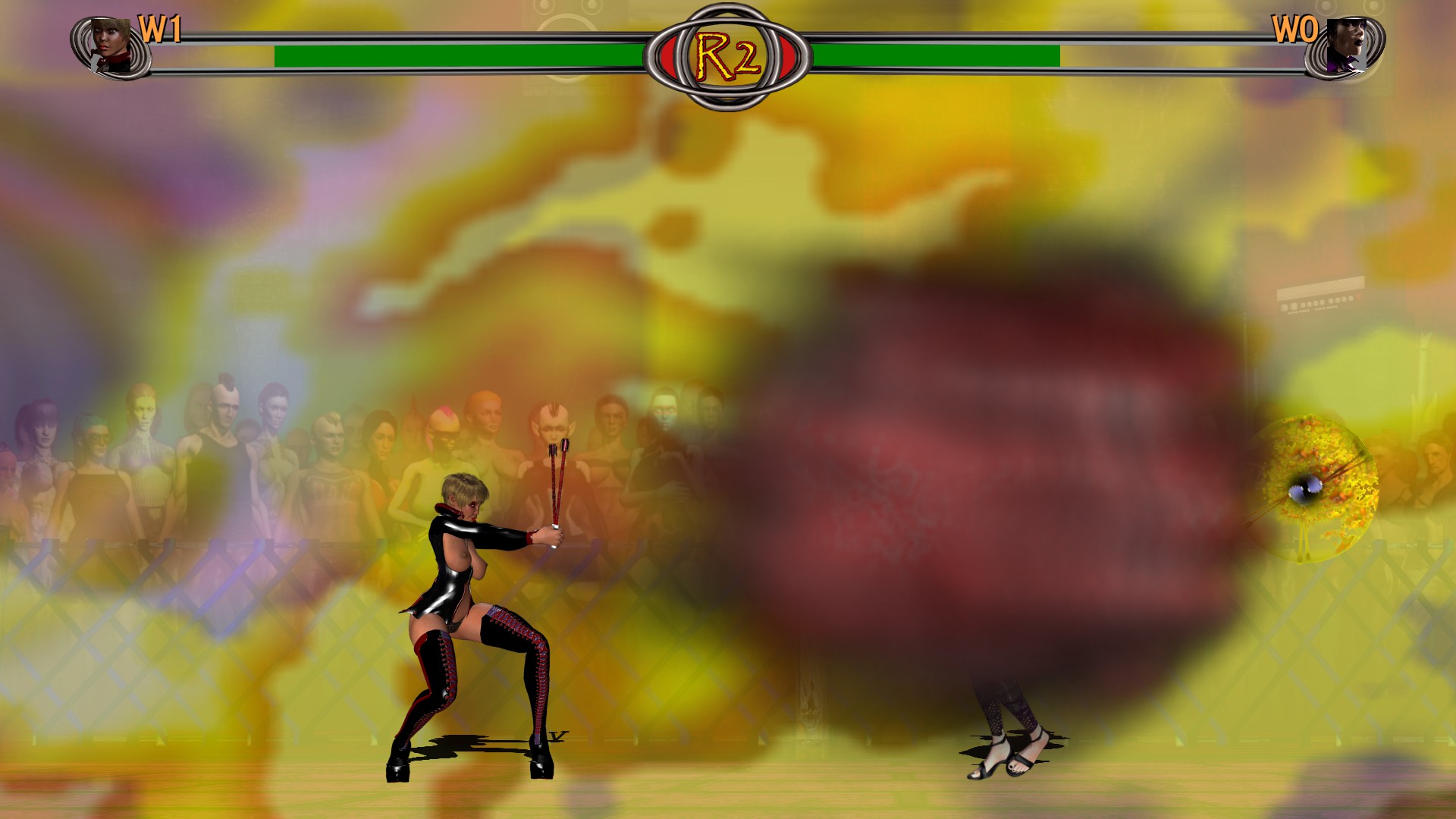 Music is generally a bit loud and ear-grating to me, though again it fits the genre, and it’s not bad. Sound effects are okay and fit the era and genre the developer was going for quite well as well, though some do seem to be reused between some characters. There’s a bit of voice work for Anya, which is adequately done and a bit distorted, sounding like something you’d hear in an early ’90s arcade.

The interface is very simple, with the combat screen showing a simple health bar and number of rounds won so far by each character; it doesn’t even show the characters’ names! Unfortunately there’s no pause menu move list or anything like that, either, so if there are any other special moves not shown in the tutorial then I haven’t found them. 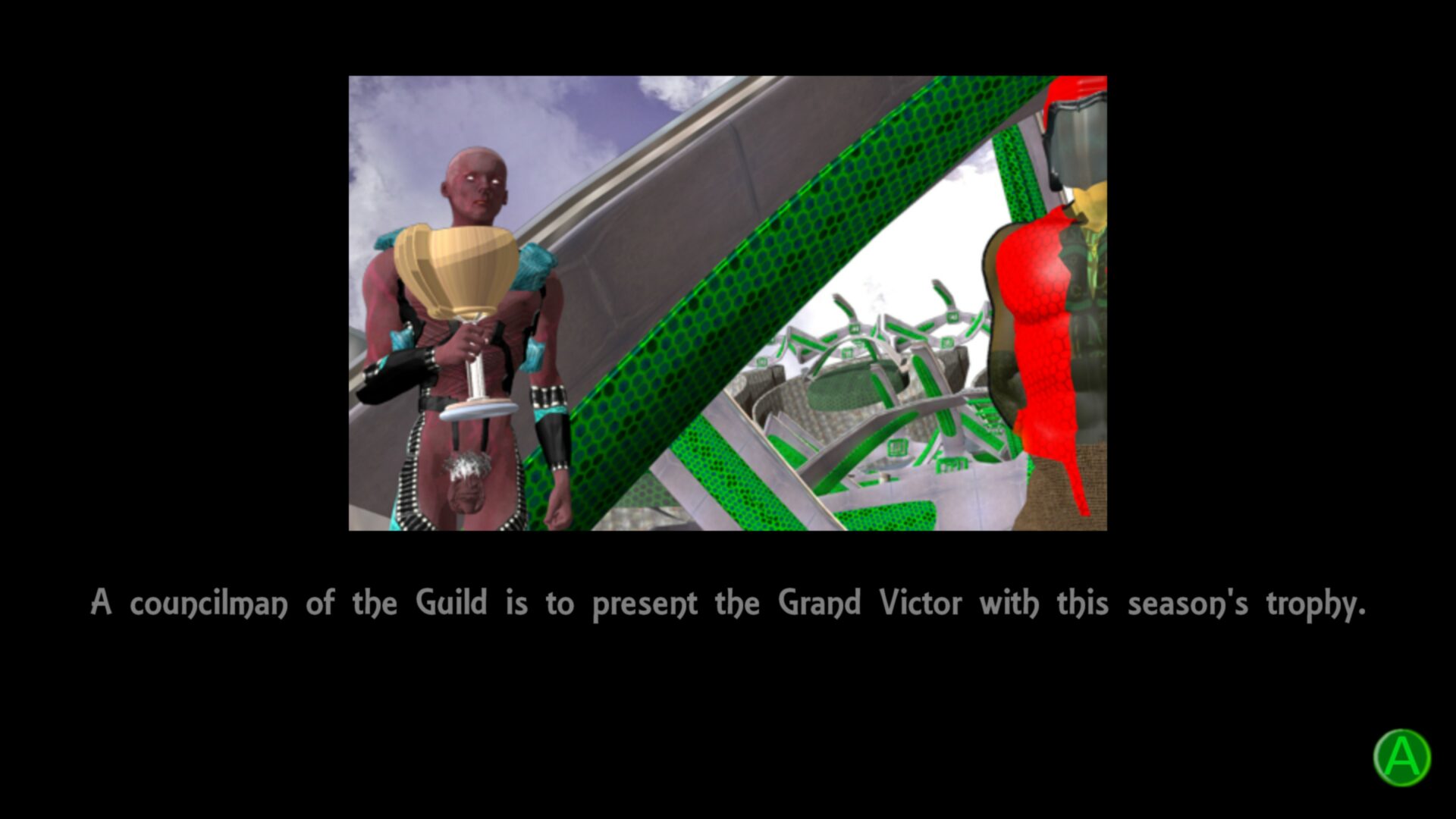 A Note about Radeon 5700-Series Cards

Having contacted the very friendly and eager-to-help developer regarding the game crashing silently at start up on my new Radeon RX5700 video card, once I had it working I promised I’d add a note to this review regarding what I did.

In my case it was a matter of installing the Adrenaline 19.10.1 drivers released on October 17th, 2019 (_not_ the October 7th release) in order to stop the consistent and immediate crash at startup. After that I encountered some more crashes the more I played, but they were significantly reduced either by playing in low-detail mode, or playing in high-detail mode with “CreateTexturesOnDemand=0” set in the options.ini file in the game folder. Either of these configurations allowed me to complete all six seasons of the game’s Story Mode.

AMD really need to improve their driver support for these cards! 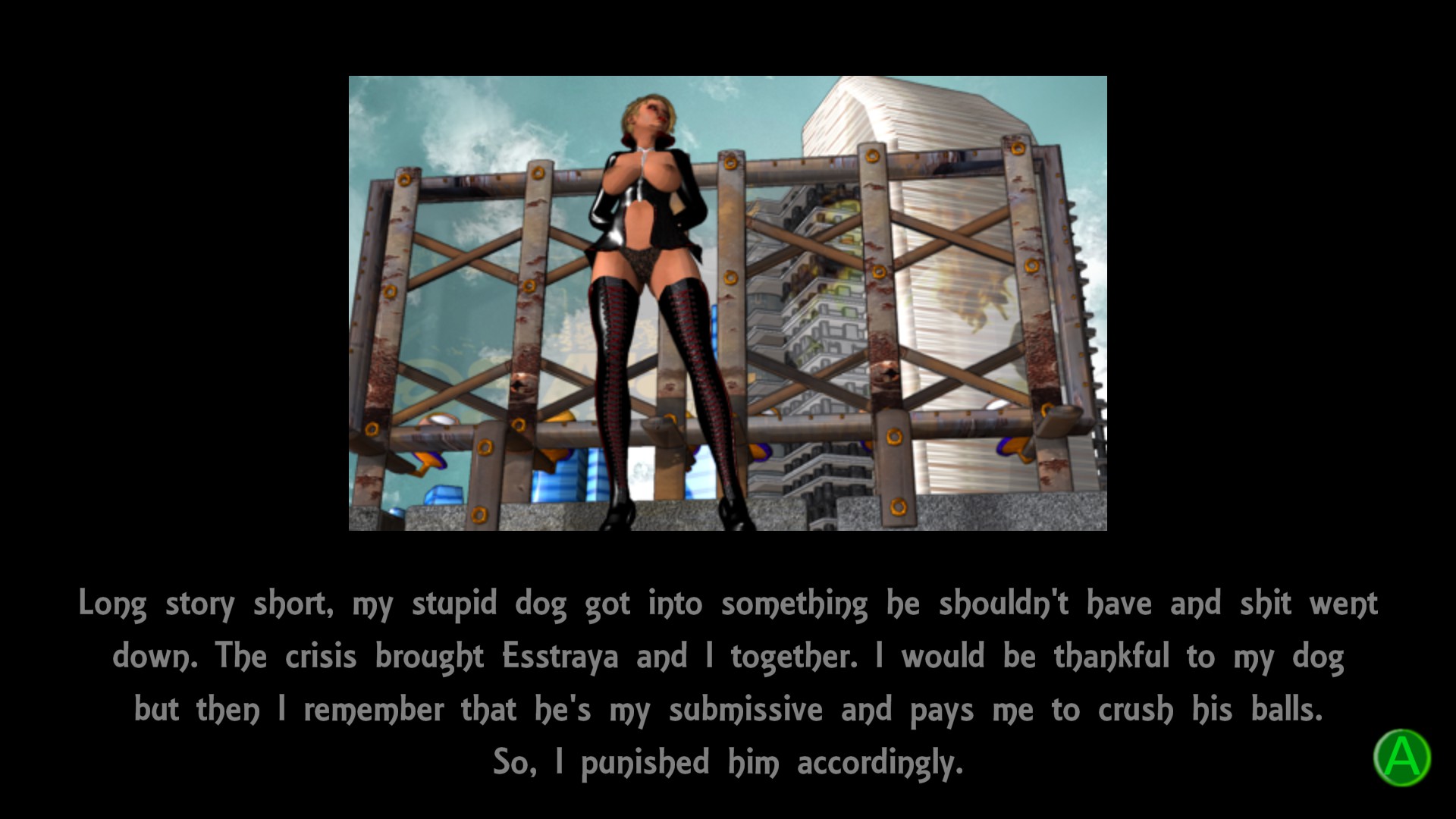 X-MiguFighters isn’t the best 2D fighter I’ve played, but it’s definitely not the worst either. Apart from the obvious boobie appeal, the combat is surprisingly tight and the controls more responsive than I expected. The rather brash script helps to increase the humorous appeal of the game, too. If it had more variation in moves across the different characters I’d be more inclined to play it more often, but it’s worth the low price of admission even if only to experience what it has to offer once.