Hell is a popular setting There is no shortage of roguelites out there and they mix all kinds of scenarios and genres. Action platforming is a popular mix. Rising Hell enters the fray with players having to climb up through hell bashing demons along the way. Its vertical focus pushes players to act quickly to avoid traps and tear apart the denizens of hell to get to the exit while watching their combo meter grow higher. 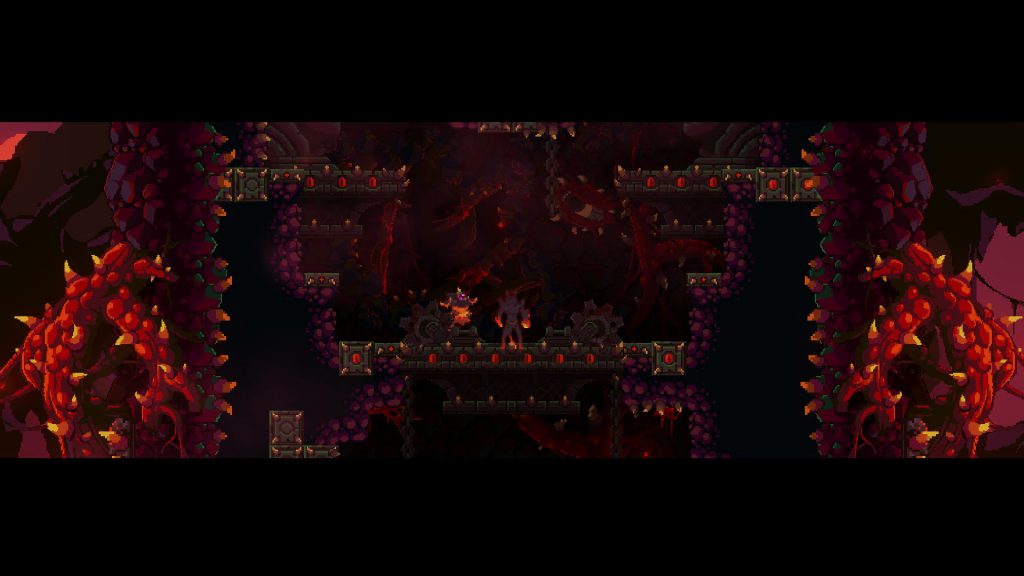 It feels natural jumping into Rising Hell. There’s a button to jump, attack, and interact. With just these few buttons the escape from hell feels fast, responsive, and engaging. Ground attacks help to boost your combo, pouncing on enemies brings the real pain and can help players out of bad situations. Jumping at enemies performs a Hellbreak, which is a sort of heavy damage grapple that boosts the player up a bit higher. 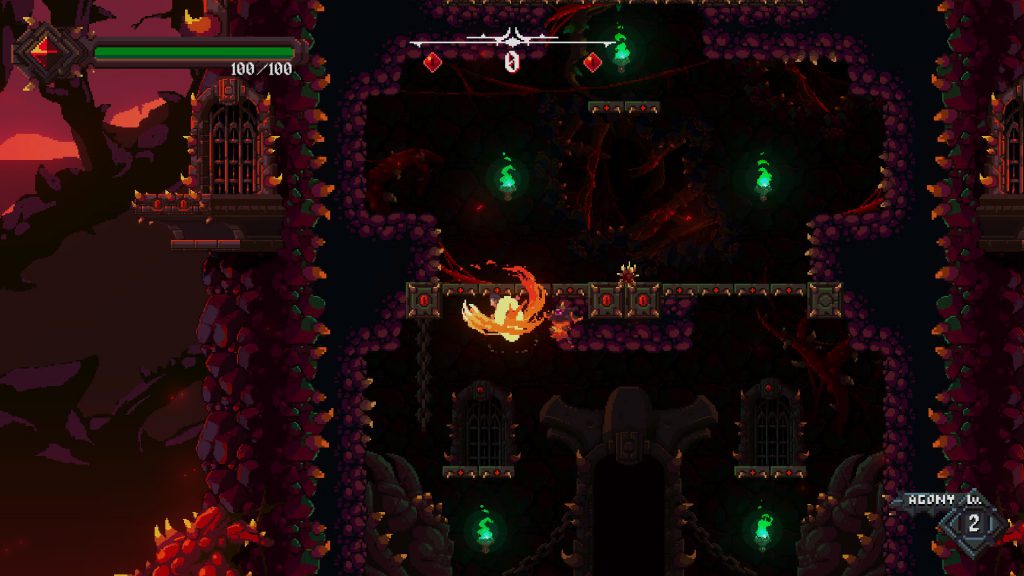 The combat is easy to pick up, though temporary weapons called relics help to add variety: some relics add chain lightning or lasers to the mix. The overall action is fast and fluid, and the combo tier is quite forgiving in terms of time, but taking any damage ends the combo. Players are encouraged to get these crimson globes in order to buy new talents at the end of a level or at shops. Many of the talents are typical boosts to damage, health or your temporary weapons, but some few more useful than others. It would be nice to see a bit more variety in the talents, but the ones that can be unlocked later feel like a step in the right direction.

It should be noted how committed Rising Hell is to staying vertical: there is no going down past platforms. That means once a player has jumped across a threshold they cannot go back to get pickups or kill more enemies. So sometimes choosing the right path is essential: spotting an enemy with a special pick up could be more valuable than going for the path with a secret area, or if you have health and confidence to spare you should choose the area littered with foes even if there are spike traps everywhere. On some levels you are forced by some environmental hazard to climb up quickly, be it saws or hellfire.

The foes that fill out the halls of hell feel well thought out. Some enemies act more like traps, preferring to explode or release damage in a patterned manner rather than engage with the player directly. Others are easy to miss until they take a chunk of health, and then there are larger enemies that take a traditional approach to combat. Battling bosses and minibosses feels rewarding. Some are straight forward and look like tougher versions of regular enemies, while others have nasty tricks up their sleeves. The bosses have patterns that change up as their health drains which make for a proper challenge: one, in particular, managed to surprise me multiple times, ending two good runs. Outside of the mechanics, the boss and enemy designs are vivid in general.

The layered animations of the menu fall into place as guitar squeals, and the announcer booms through a voice modifier, and with that the stage is set for a fast-paced arcade experience. Given how popular hell is as a game setting (roguelite heavyweight Binding of Isaac is steeped in biblical imagery) The aesthetics seem to partially inspired by classic arcade titles as well as the Devil May Cry series with the red orbs, eyes, Devil Bringer like arm, and the focus on score with the combo multiplier.


The variety in tilesets is also impressive given how easy it would be to just make hell red and yellow: instead players are treated to purples, greens and yellow invoking nausea,and psychedelics in addition to the traditional brimstone. The enemy design is also unafraid to take on non-humanoid characters which leads to creative encounters. Along with that the traps also stood out: they start with traditional spikes on the floor, but they get more creative and demented as the climb continues. 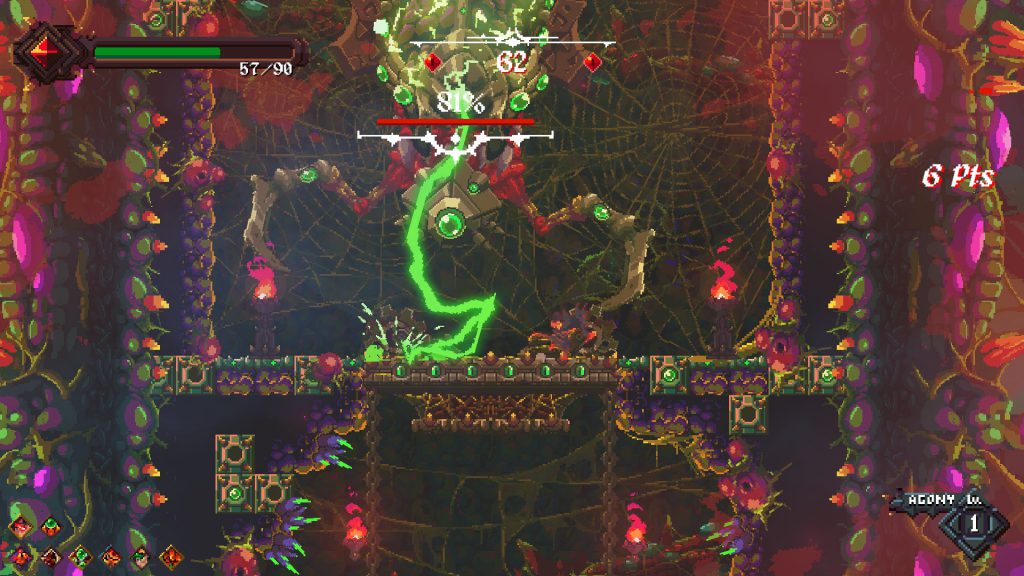 How many circles of hell are there again? 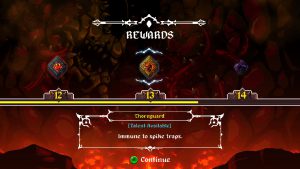 Content is key when it comes to roguelites. This early access title has enough to get off the ground for a good dozen or so hours, and if it sticks to its current development plan there will be plenty to enjoy. In its current state there are only 2 playable characters: one with melee and one with a ranged weapon. The two characters feel very distinct and the relic weapons change to fit either characters’ styles quite well. There are 7 unlockable starter weapons in the beginning with more to unlock. Each time you play counts towards a progress bar that unlocks more relics, talents, etc. (right now this level is capped at 30). There are only 2 worlds currently, each with a few different branches, levels, mini-bosses and bosses. Challenge mode is based on progress and completing x number of a certain action. Playing the game feels good and so does filling out the collection of unlockables. Right now beating the current final boss (world 2) unlocks a new level of Agony, which ups the challenge for players. Its a fair amount of content for now, but I am more excited to see what comes next. 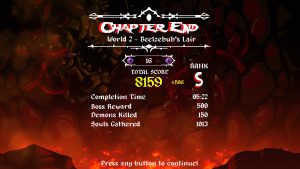 Rising Hell is a fun roguelite in terms of mechanics. The visual design, both in the levels and the enemies, is surprisingly fresh while keeping the audio more in line with retro classics. Everything feels smooth and ready with hardly a bug in sight. The different forms of progress between blight and progression levels are quite forgiving, which might be appealing for some more than others. The next step will be watching the content get fleshed out more, and with that players will be able to look forward to a fiendish action platformer