The world is full of maladies and it’s up to you to create a hospital capable of treating them.

I must admit that as open-minded as I try to be when it comes to business management simulations, the hospital theme isn’t my first choice. The said Project Hospital caught my eye with the initial impression that it gave me of its depth and impressively large list of options for designing the medical center of your dreams. That impression has been proven to be true after spending some time running a couple of my own hospitals while a number of unexpected strengths and flaws revealed themselves as well.

What Kind Of Place Are You Running?

Project Hospital isn’t short on options when you are deciding what kind of medical center you want to administrate. There is a campaign available that kicks off with a trio of tutorial missions that show you the ropes not only on the basics but also the mechanics more unique to this title. Alternatively, you can choose to play in sandbox mode where you can either build a hospital from the foundations up or select a pre-built structure to use if you’d prefer to stick primarily to management. 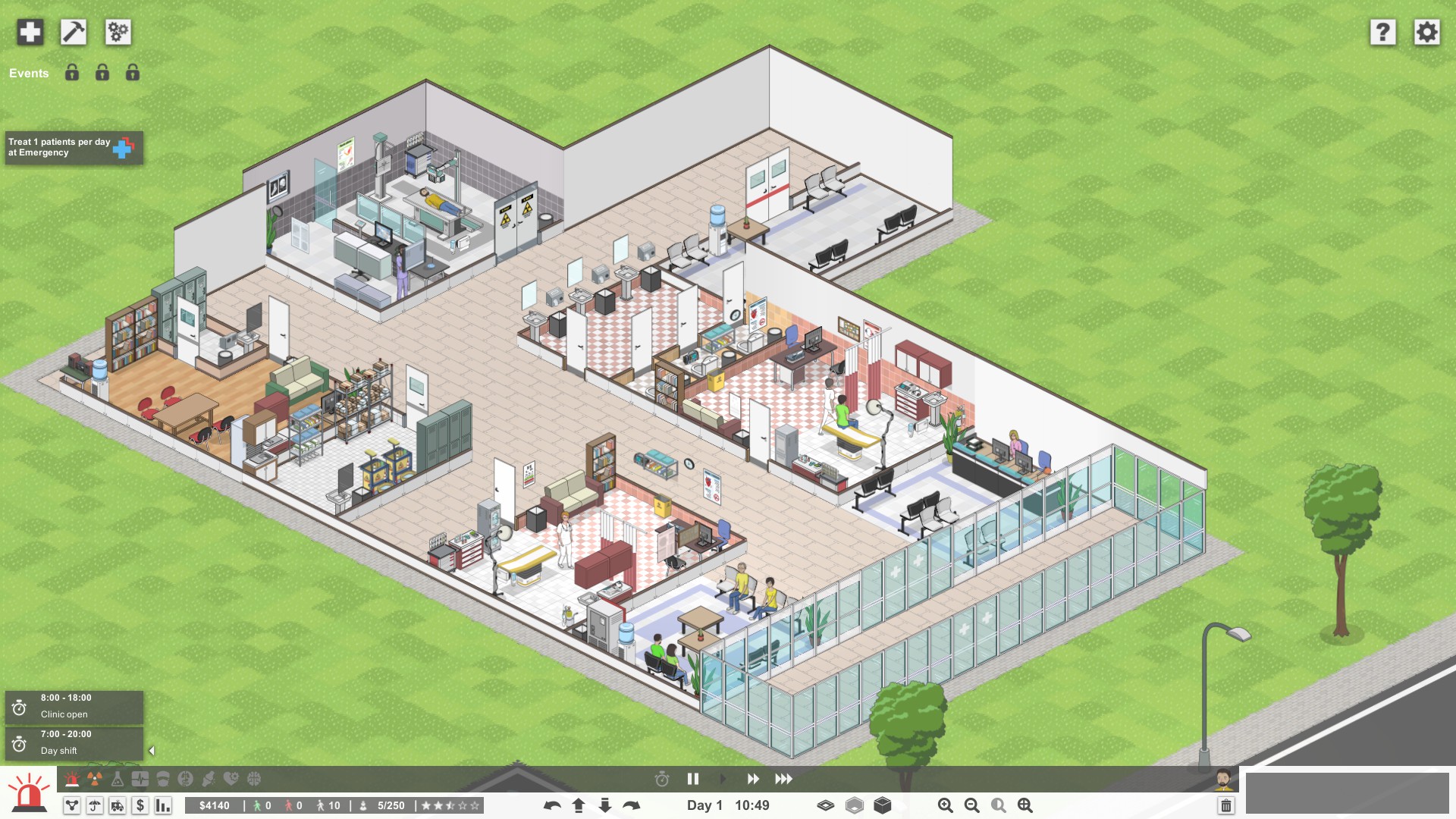 When building your own hospital, you get to make every choice along the way. Anything from a small-town office to a sprawling medical center is possible and the long list of decorations, structures, and painting options will allow you to truly make your facility your own. As I was mostly playing in the campaign mode, I didn’t engage in the building side of the game as much as someone else may have, but I did build a small clinic from the ground up on the side and I enjoyed seeing it transform from a field into a fairly busy and successful, three doctor office.

Managing your hospital is a fairly casual and low-stress endeavor once you have a grasp on the inner workings of your building and staff and you’ve got everything in order. This isn’t to say it’s simple as there are plenty of moving parts, but the systems provided allow you to manage your medical facility as opposed to micromanaging it which is a flaw that this genre finds itself falling prey too frequently. Most of your time will be spent planning and implementing ways to improve and expand your hospital as opposed to making sure that your staff are doing their jobs.

The business side is about what you would expect: budgeting, staff management, and making sure that patients have a positive view of the services that they have been provided is paramount to your success. The reports that are available are detailed and useful as they frequently highlight any issues that are developing. Your dealings with insurance companies also stand out as an interesting feature as you can choose which ones are accepted by your facility and they not only bring more patients to your facility but offer objectives that can be completed for significant rewards. 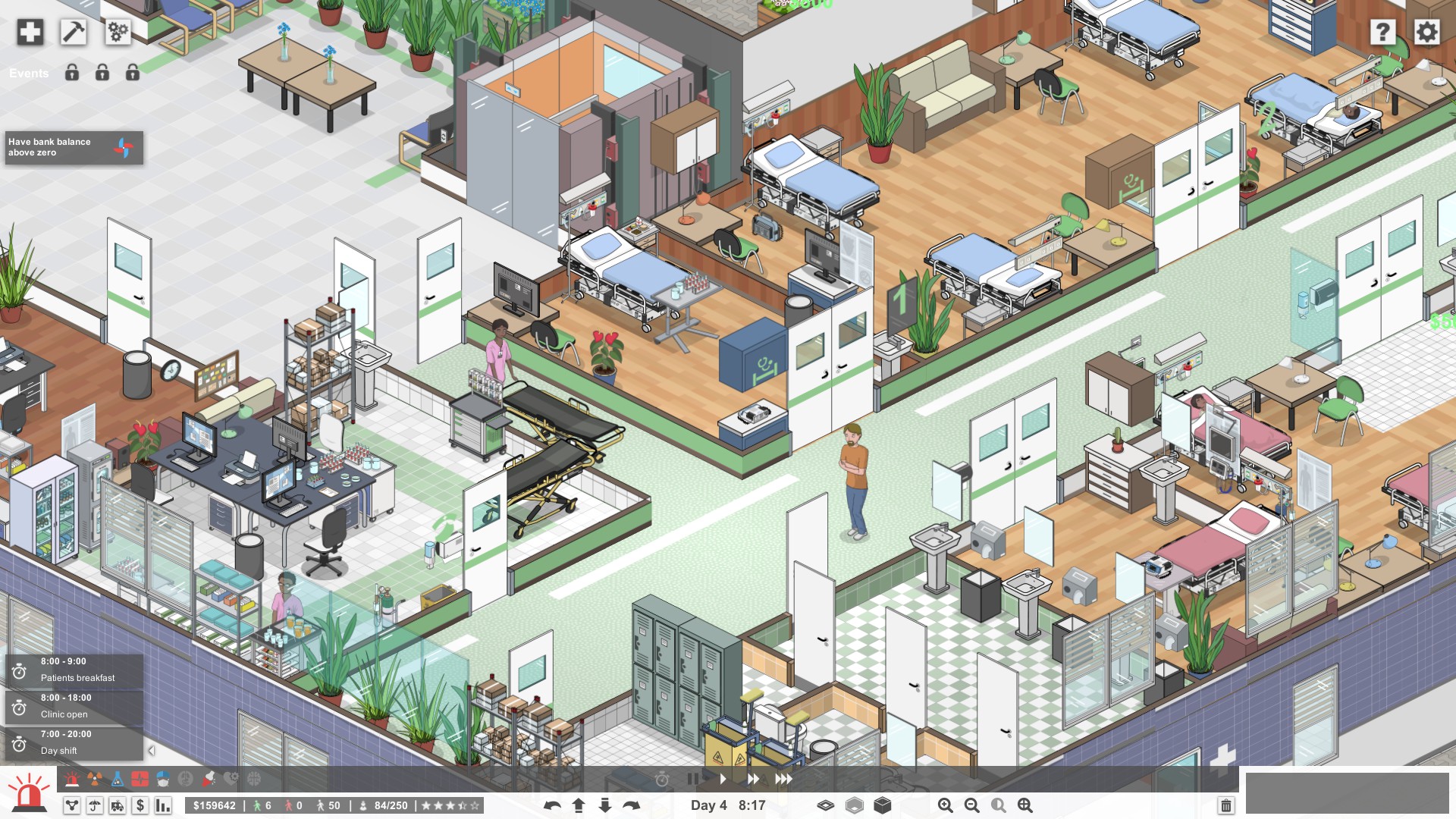 The biggest surprise of Project Hospital came in the detail given to the staff and patients. I’d been expecting the individual people within the game to serve their purpose but provide little more than that; I had assumed doctors would have a stat that determined how talented they were at being a doctor while patients would be defined solely by their illnesses. You know what they say about assumptions.

Your staff is composed of employees from four categories: doctors, nurses, technologists, and janitors. Each of these employees has a rank in their profession that is determined by these skills and they tend to include a basic talent that all in the profession have, such as every janitor having a cleaning skill. However, staff members can have up to four skills and at least two of these tend to be chosen from a fairly sizable pool such as a talent for microbiology or surgery. These skills improve with use and often their related actions are not available to those who do not have at least a basic understanding of it. There will be times when you are not only looking to hire a doctor with a desired rank and proficiency, but one that is specialized for a specific role that you’re trying to fill. If this weren’t enough to get a nod of approval from me, the addition of the trait system would certainly convince me. Every character that you see, whether a member of your staff or a patient, has a number of traits that alter their behavior in some way. If one of your staff has a hard-working trait, they won’t take as many breaks, though you might want to reconsider hiring them if you see that they also have a long commute which means that they may be late to work often. 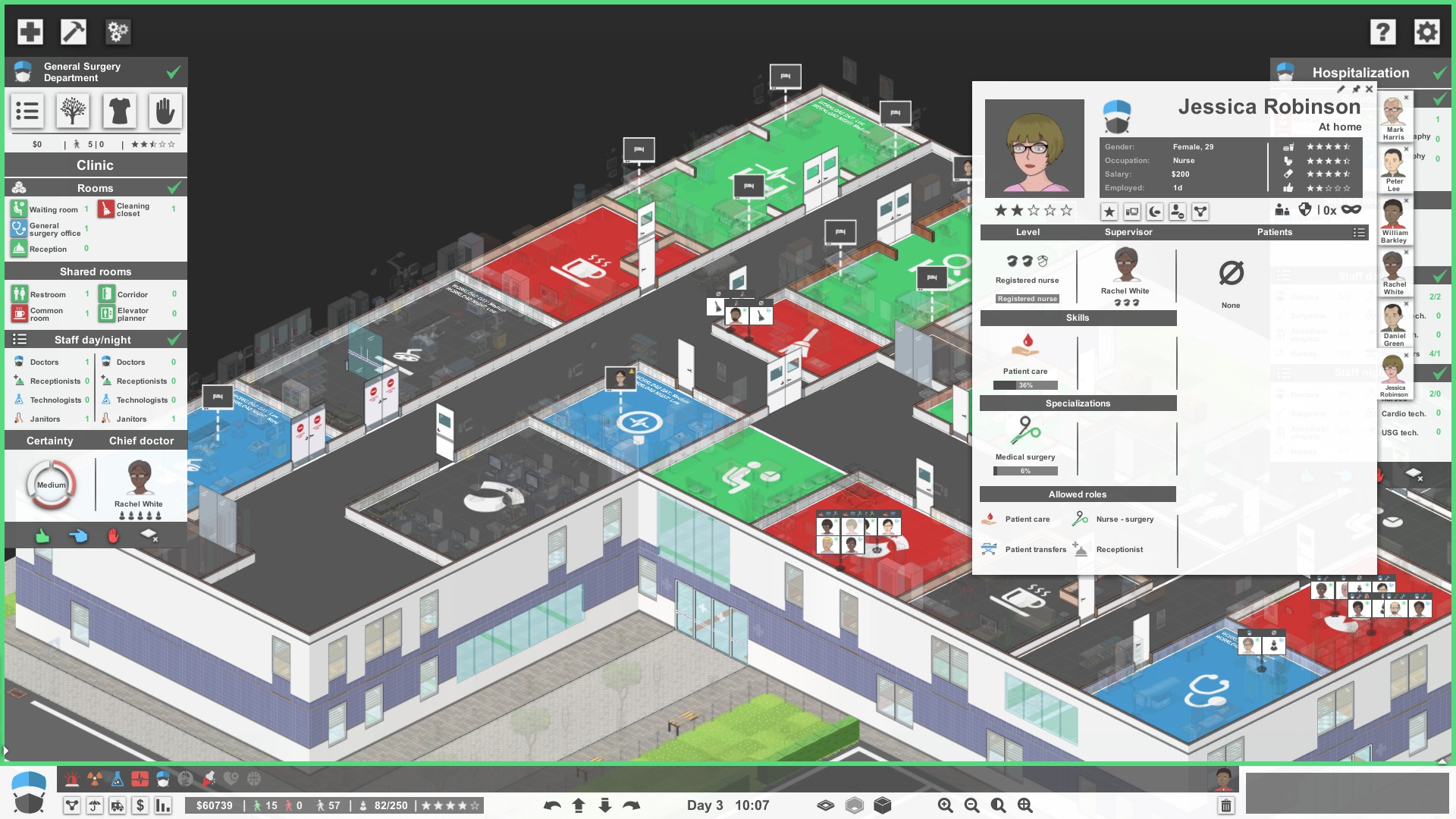 As you might assume, patients operate much differently than your staff members do. They arrive at your hospital with a list of possible diagnoses generated by the symptoms that you are aware of. You’ll also be informed of a number of symptoms that have not been discovered as of yet and your staff will need to perform examinations selected from those available based on the department that they are in and the capabilities of your facility. Once enough of these symptoms have been identified, a diagnosis will be discovered and treatments can be performed not only to treat the diagnosis but also to treat the discomfort caused by the symptoms themselves. To make matters even more interesting, if you want to take a more hands-on approach, you can assign patients to yourself and determine which exams and treatments that you want to provide. You’d be surprised how entertaining it is and it added a casual puzzle element to the game that I enjoyed far more than I would have thought that I would. 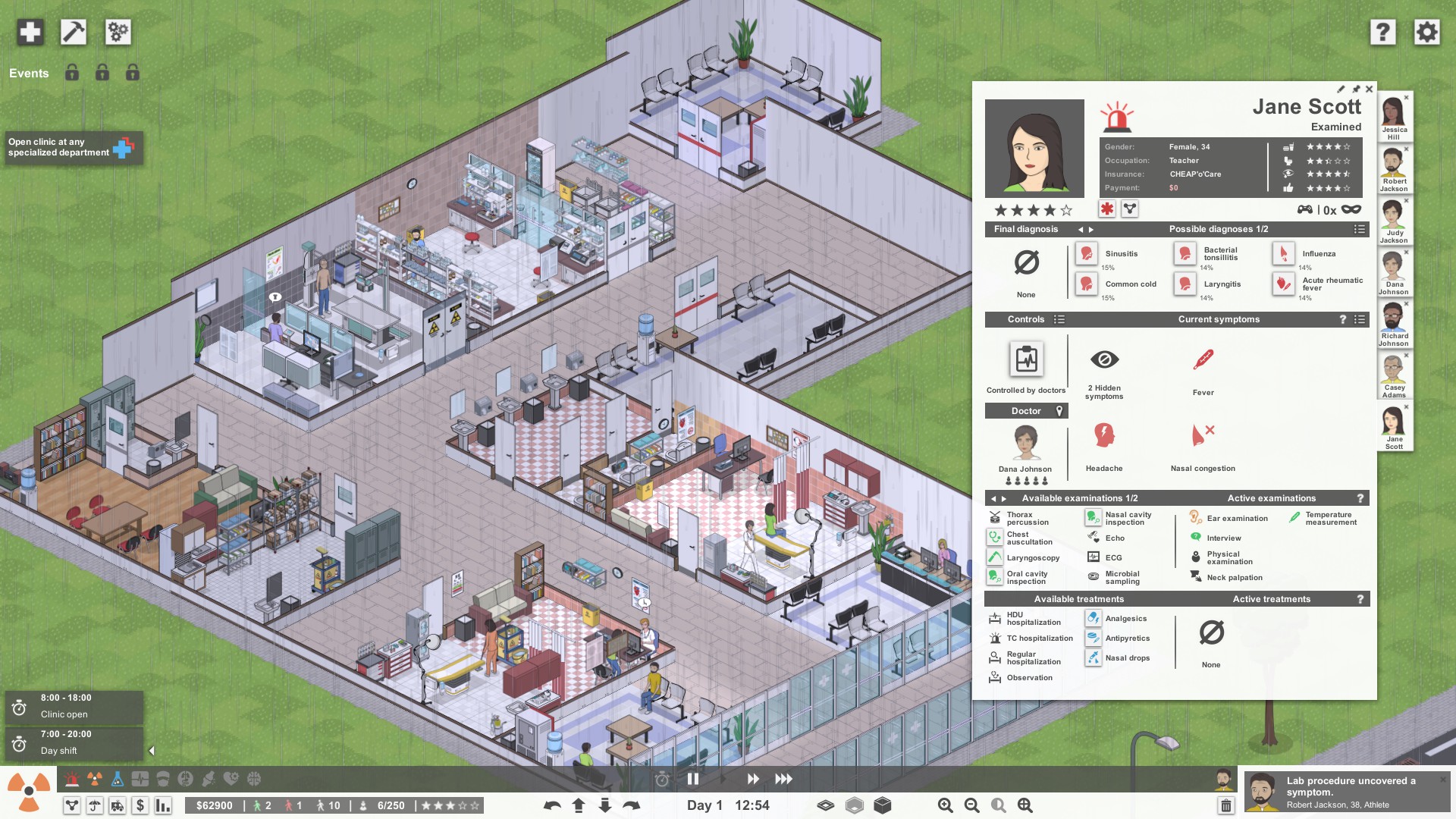 Although Project Hospital has a great deal to offer, particularly to those who are fans of the genre, it is not without its flaws. There are still a few relatively common bugs floating around that can not only break your immersion but frustrate you if you’re attempting to run the perfect operation. I ran into one in particular that completely broke my surgery line and prevented any further surgeries to happen for the length of the time that I was trying to figure out what was going on. It wasn’t until I finally gave up and transferred that offending patient to another hospital that the entire line immediately picked back up and everything was functioning as if there had never been an issue. Everything, of course, outside of that day’s prestige as the lack of procedures taking place displeased not only patients, but caused a decrease in reputation overall due to the reduction in efficiency.

Project Hospital easily met my expectations for a game falling into this theme and genre. There are a few bugs and some minor issues with the game but overall I enjoyed my time playing it. I can easily see revisiting this title every once in a while as it’s a solid game but I can’t say that I was necessarily hooked by it. However, there is certainly time for me to be converted to a more devoted fan as this game has a couple of things going for it that have me optimistic. For one, it has already developed a healthy workshop with a number of mods that add some interesting elements to the game, and two, a DLC has been announced by Oxymoron Games that suggests that there will be a mode to make diagnosing patients much more challenging as well as the option to directly assume control of one of the doctors in your employ.

If hospital simulation is a theme that excites you, you can’t go wrong Project Hospital, particularly if you enjoy constructing and designing your own buildings. If you’re looking for a game that is a significant challenge and offers a lot of new concepts to the industry, I would look around a little more before deciding on purchasing this one at its current price. 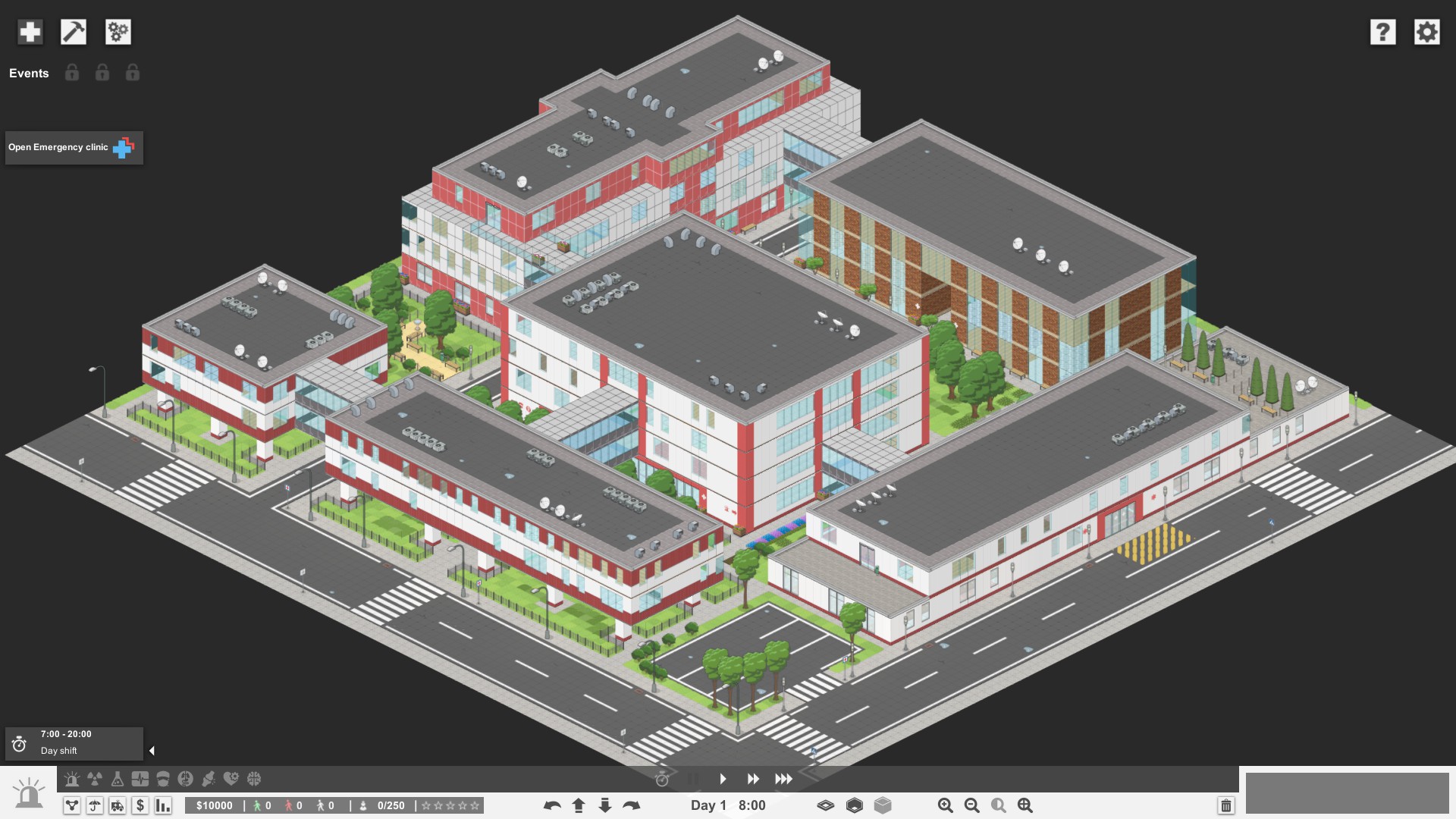