A catgirl, a police officer, a schoolgirl, and a zashiki-warashi walk into a bar … .

The game tells the story of Kagami Makato, a college student with an extraordinary background and the previously unrealised ability to see demons, ghosts, and other supernatural creatures and phenomena.

Makato’s grandfather dies shortly before the game begins and Makato inherits his grandfather’s house and its resident zashiki-warashi — a friendly, if rather irreverent house spirit by the name of Iyo — as well as his legacy: the responsibility to use his unusual perceptive abilities to serve the town’s by helping its recently deceased to move on.

Since I’d rather not give away too much of the story in this review I’ll just say that the plot is like an intertwined detective and love story, which includes adult themes: horror, blood, violence, obscured nudity, and sexual innuendo. The plot itself is interesting enough to keep the player reading, but to me the focus was on the characters and their interactions. At times it’s emotional and heartfelt, and at too many other times it focuses rather intensely on food, which I found a little distracting and rather boring at times. I mean, I’m not really that interested in what the characters had for every meal in the month or so in which the game’s story takes place. 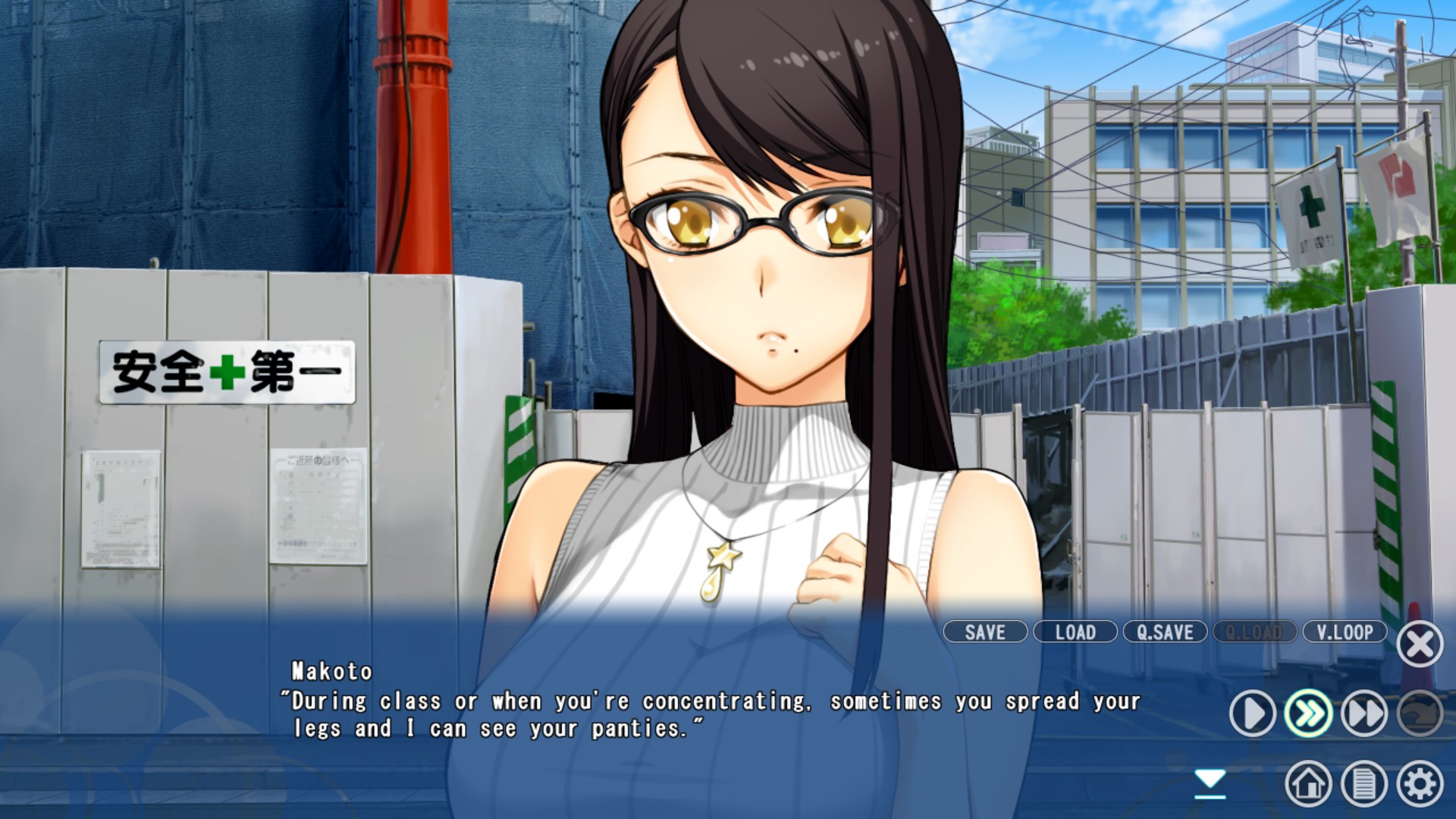 The writing quality is excellent, as I’ve come to expect from anything published by Sekai Project. The translation is top notch and I only noticed a few small grammatical errors. Early on I felt some of the dialog was a bit “wooden”, but bearing in mind the setting and the expectations of etiquette and societal norms, and the backgrounds of some of the characters, I think it was simply my misunderstanding.

The characters themselves are quite fun, though rather stereotypical at times. Sure, the abilities of the demons and the situations in which they find themselves are a little unusual at times, but besides that each character falls quite neatly into a stereotype.

There’s the protagonist: a sort of default-nice pushover guy with a fairly bland personality and unexplainable sexual allure. There’s Iyo: a shut-in gamer girl who likes to play practical jokes. There’s Kotori: the schoolgirl wearing the ubiquitous seifuku. And there are Iris and Aoi: a loli in typical anime lolita fashion, and an unrestrained catgirl. None of the characters are bad, and indeed it’s actually fun to follow them through the story, but it just all seemed a bit predictable. 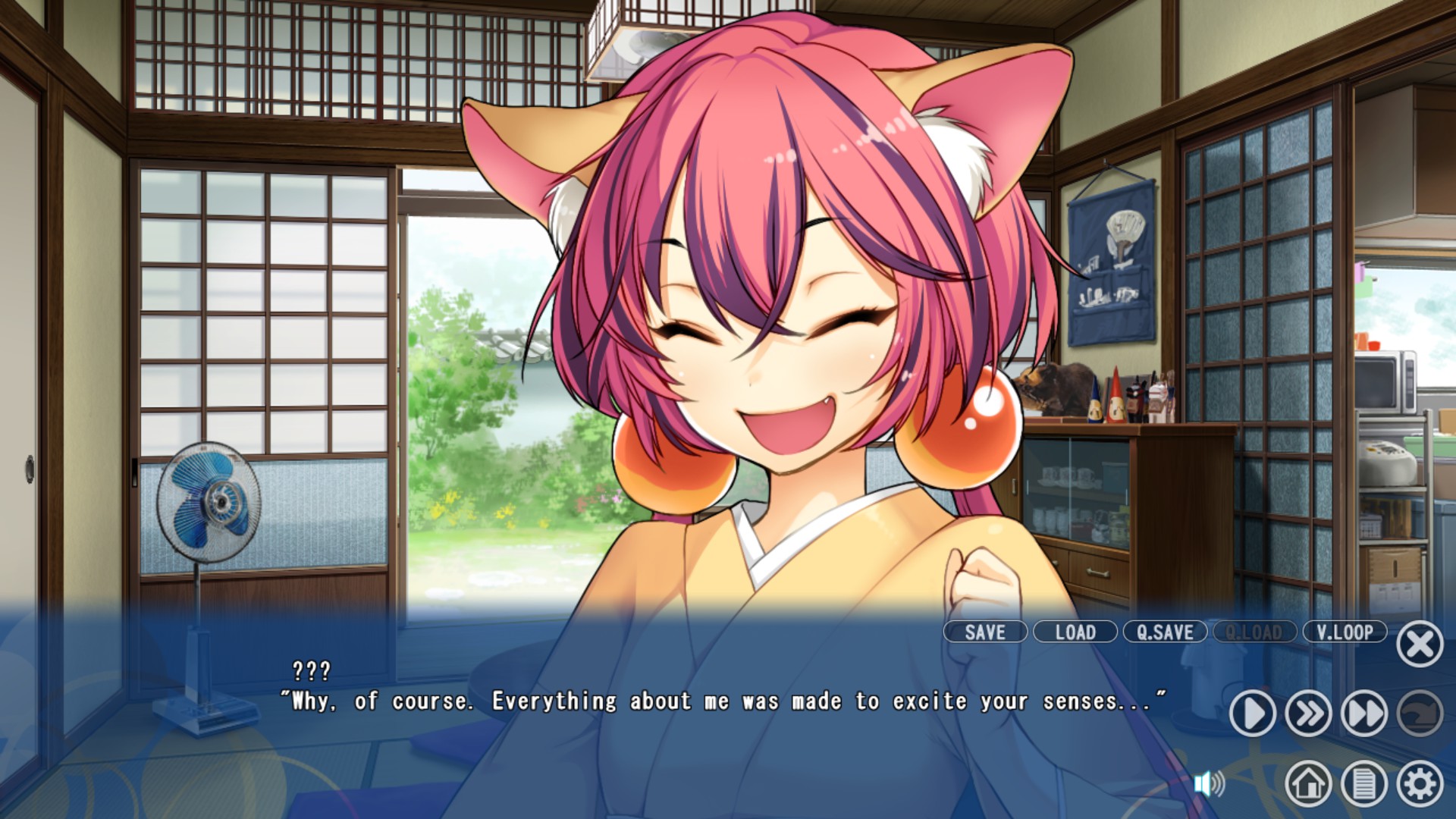 The game is presented in the standard visual novel style, with a semi-transparent text box in which the main story is read superimposed over 2D paper-doll style sprites for characters and static backgrounds.

The backgrounds are very nicely drawn with detail in all the right places while not going overboard, though there doesn’t seem to be very many of them; many places are revisited during the story. As is very common in VNs, characters unimportant to the story are not drawn at all, so places described as crowded in the text look rather empty in the images. 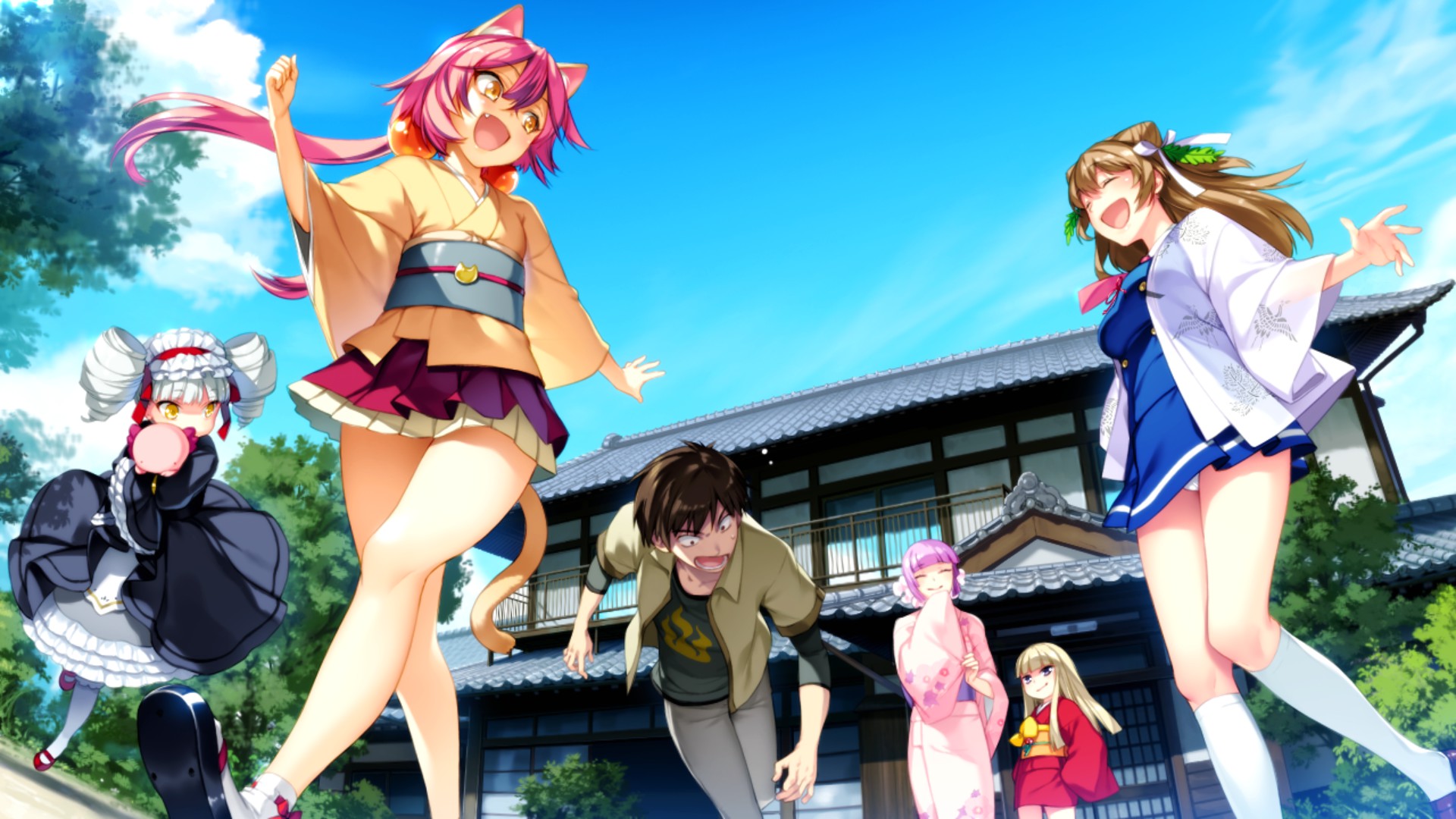 Characters are beautifully drawn with a distinctive and consistent style. Each character only has a small number of poses, with no full-body animations and only limited movement about the screen, but facial expressions are used continually throughout the game and work very well. Full-screen CG images are in a slightly different style to the sprites, but are really great, too. The interface is full featured and easy to use, with helpful tooltips.

The game’s characters are fully spoken in Japanese by professional voice actors, except for Makato, whose text remains unspoken as is typical for the genre. There’s a good selection of music with what seems like quite a large number of tracks in different styles. Sound effects are used relatively sparingly, but always fit the mood of the story well.

So, what about boobies?

If you’ve followed my other reviews you’ll know that I’m a fan of visual novels: both “sexy”, which I tend to call “boobie games”, and “non-sexy” in nature. So which is Nanairo Reincarnation? 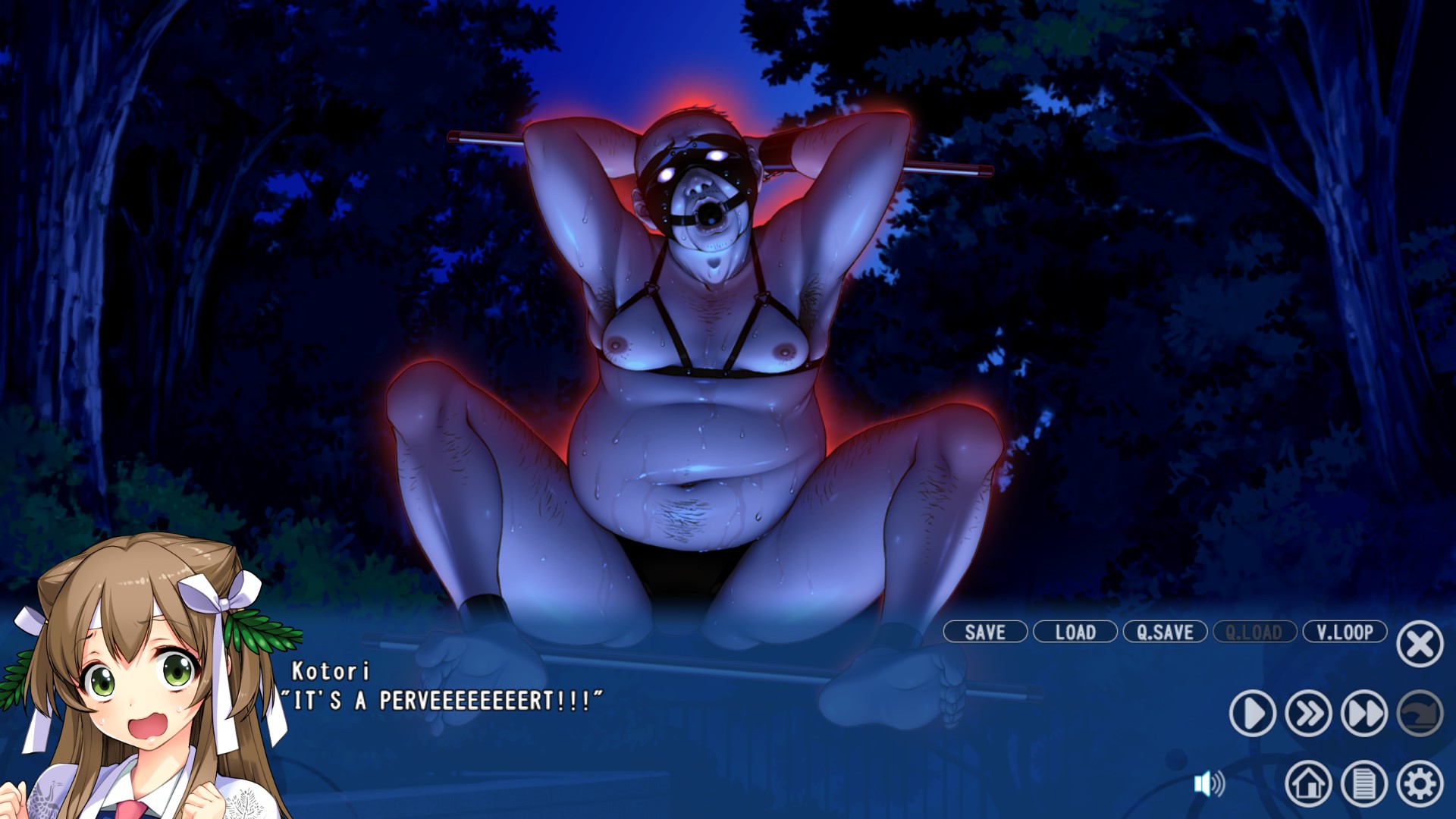 Well, from the Steam store page for the game you’d be forgiven for thinking it’s a boobie game: it’s had Sexual Content and Nudity as tags right from the start. The Steam version, however, has only obscured nudity (Kotori in the bath), with sexual content limited to innuendo and some very tame images showing cleavage or underwear. It’s definitely not a boobie game.

There is, however, free official R18+ DLC available from a third-party site, which adds a lot of sex scenes and full nudity, turning it into a boobie game after all! While I’m ever-so-slightly disappointed that the DLC is not available on Steam, it’s only a very minor inconvenience. I commend Sekai Project and Silky’s Plus for making it available for free at all.

While the plot is the same with the DLC installed, the feel of the game changes from a sort of sweet romance story to something a lot more sexually charged, and this is mainly through the change in Makato from a sort-of shy and bumbling inexperienced guy who’s barely kissed anyone before into a bit of a sex maniac. I think it’s great that the DLC is optional; the game is certainly worthwhile playing without the DLC for anyone not interested in the sexy stuff — and personally I think the story is better without it — but the DLC is a great addition for anyone wanting something more explicit. 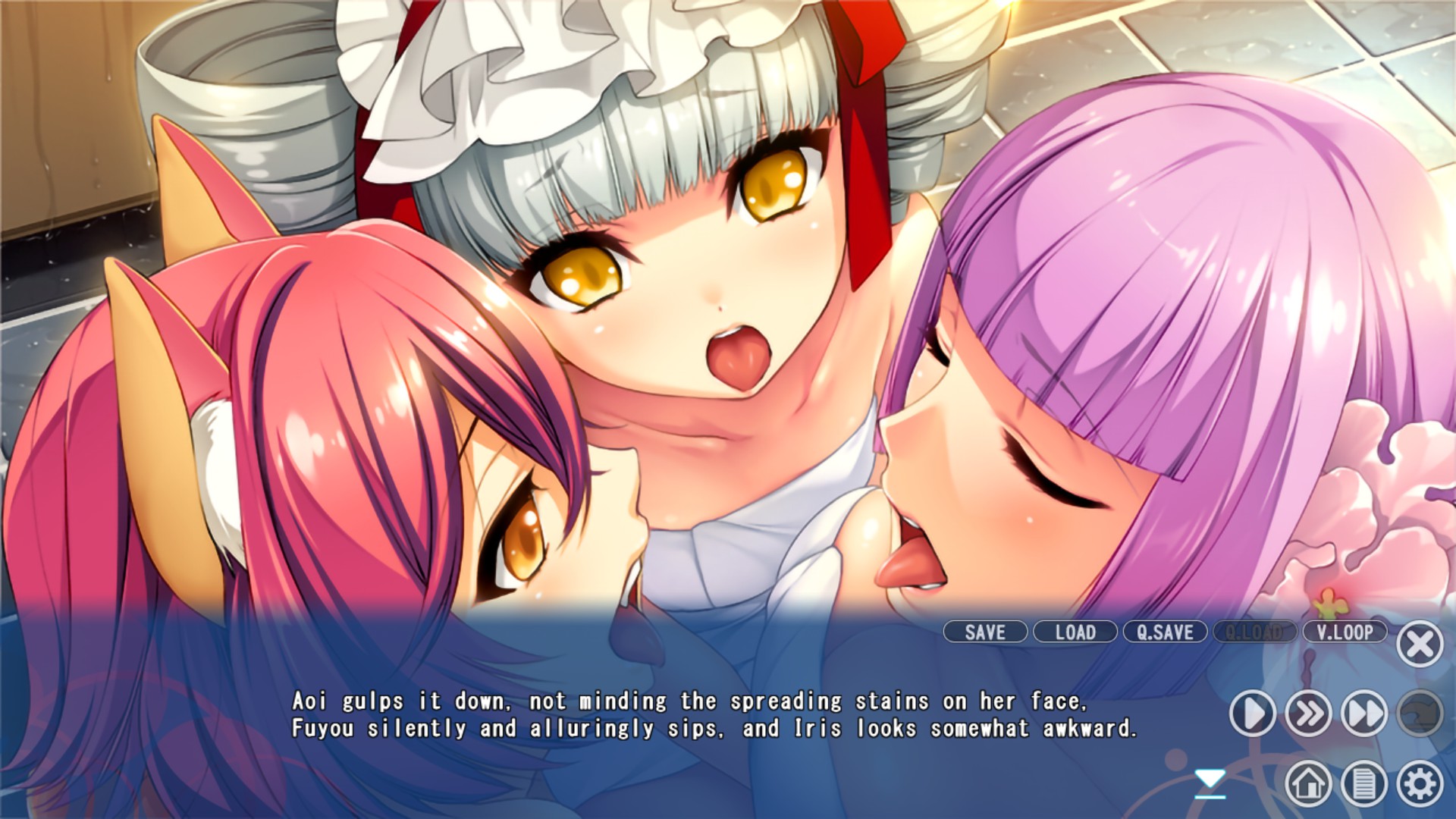 The story features a significant number of choice points: I’d guess something like 15-20 of them in total, though most of them seem to only cause minor branches to the story. Combinations of choices lead to five different endings, each with the same overriding plot, but with major changes to about the last quarter to third of the story in order to focus on one of the five characters. I did notice a few lines here and there that didn’t seem to quite fit with the branch I was on, but generally it was consistent.

My first play through took approximately 10 hours, though I did skip some of the voice work in some of the food-related scenes, moving on as soon as I’d finished reading the text. I’ve now spent over double that reaching the other four endings. I think it’s a bit long winded in places, but feels like it’s about the right length for the story that’s told. There seem to be a few sections of repeated, or at least very similar, text, making the skip features a little unwieldy at times, but generally it’s easy to go back to each decision point and only read the new stuff.

I believe the original PS Vita version included trophies for each of the endings, as well as for seeing each scene or reading each line of text. One would naturally expect these to be replicated in Steam as Achievements, but unfortunately the developers didn’t feel the need to do this. The included galleries (CG, scene, and music) can be used to confirm that you’ve seen everything the game has to offer, but the lack of Achievements is still a bit disappointing. 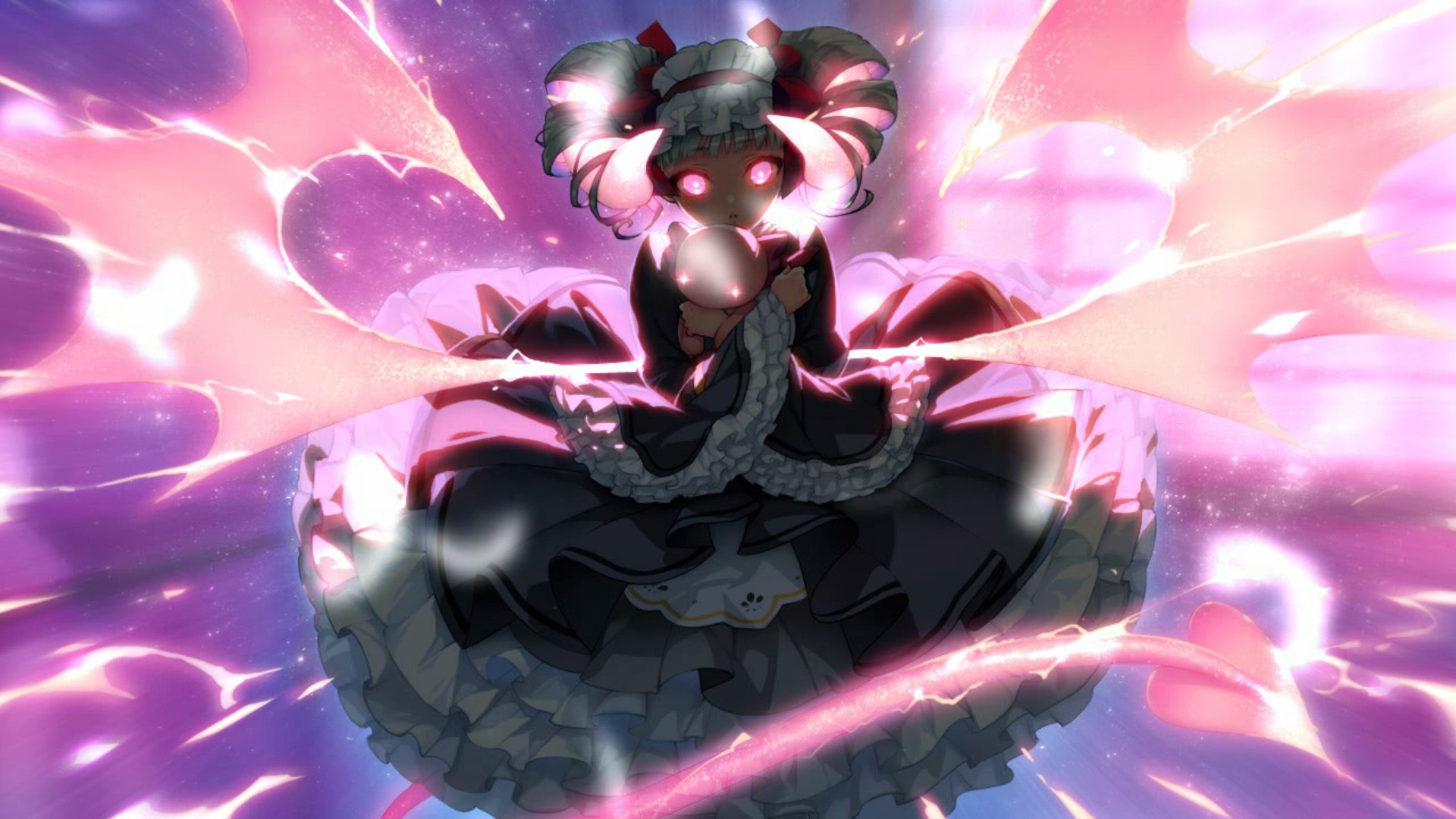 Nanairo Reincarnation is a solid visual novel that should appeal to people wanting a nice anime-style romance and mystery story, and with the free DLC should include those wanting a more hard-core experience. Great writing, fun characters, and beautiful art make it a game that’s easy to recommend.