Probably the closest thing to a good and proper Western FPS in years – a fantastic multiplayer experience overall.

It’s worth mentioning that I have never touched Hunt: Showdown prior to the 1.0 Release version which has changed the game massively – I’ll mention some of the more obvious changes throughout the review. I say this because any comparisons between the Early Access and the Release version will be sorely lacking in the review and won’t be a focus. This is about the current, 1.0 Release version.

“Have you ever played The Division’s Dark Zone but wanted a much better version of it?”

After about half an hour thinking of how I’d describe you Hunt: Showdown in as few words as I could, this is what I came up with.

Hunt: Showdown takes ideas from a lot of different genres and game modes. The open-world with players hunting each other for better loot takes obvious ideas from the Battle Royale games, while the PvE mode also takes cues from a regular open-world Co-Op experience we’re all so fond of. With a surprising amount of depth and lore tied to the universe of Hunt, it’s one of the freshest experiences you’ll play of recent memory, though the lack of modes will cause it to be a bit too repetitive to be a full recommendation to all audiences, including fans of FPS games.

The absolute core of Hunt is the gameplay, with a lot of quirks and rather unseen ideas tied into it that makes it quite fresh. The game presents immediately with two gameplay stances: Hunter and Gunslinger.

While gunslinger is easily summarized as “how every other FPS functions”, Hunter is quite different: keeping your weapon holstered, you need to draw it with a button and another button will make you aim down sights. This is not that great of a choice from my experience as Gunslinger ends up being superior in every way when in combat scenarios. Mind you, these are conclusions drawn from playing and personal experience.

After this, you’re presented with a rather well done tutorial: putting you in the open world, it nicely guides you through the essential mechanics of bounty hunting and the overall objective of Hunt: Showdown – you must search clues that will narrow the map further and further until you can pinpoint the location of a boss, with its own mechanics, weaknesses and strengths. After killing and looting it, your bounty can be extracted so you can win credits and XP – always beware upon extraction, other players can be after you to kill you and steal your bounty, creating this very tense (and unique) cat and mouse game to determine who ends up being the best Hunter. Sprinting to the objective can work only so much as the extraction can become more difficult since you focused on getting the bounty fast, rather than eliminating the enemy hunters and playing more carefully, which would increase your survival odds for the extraction phase. 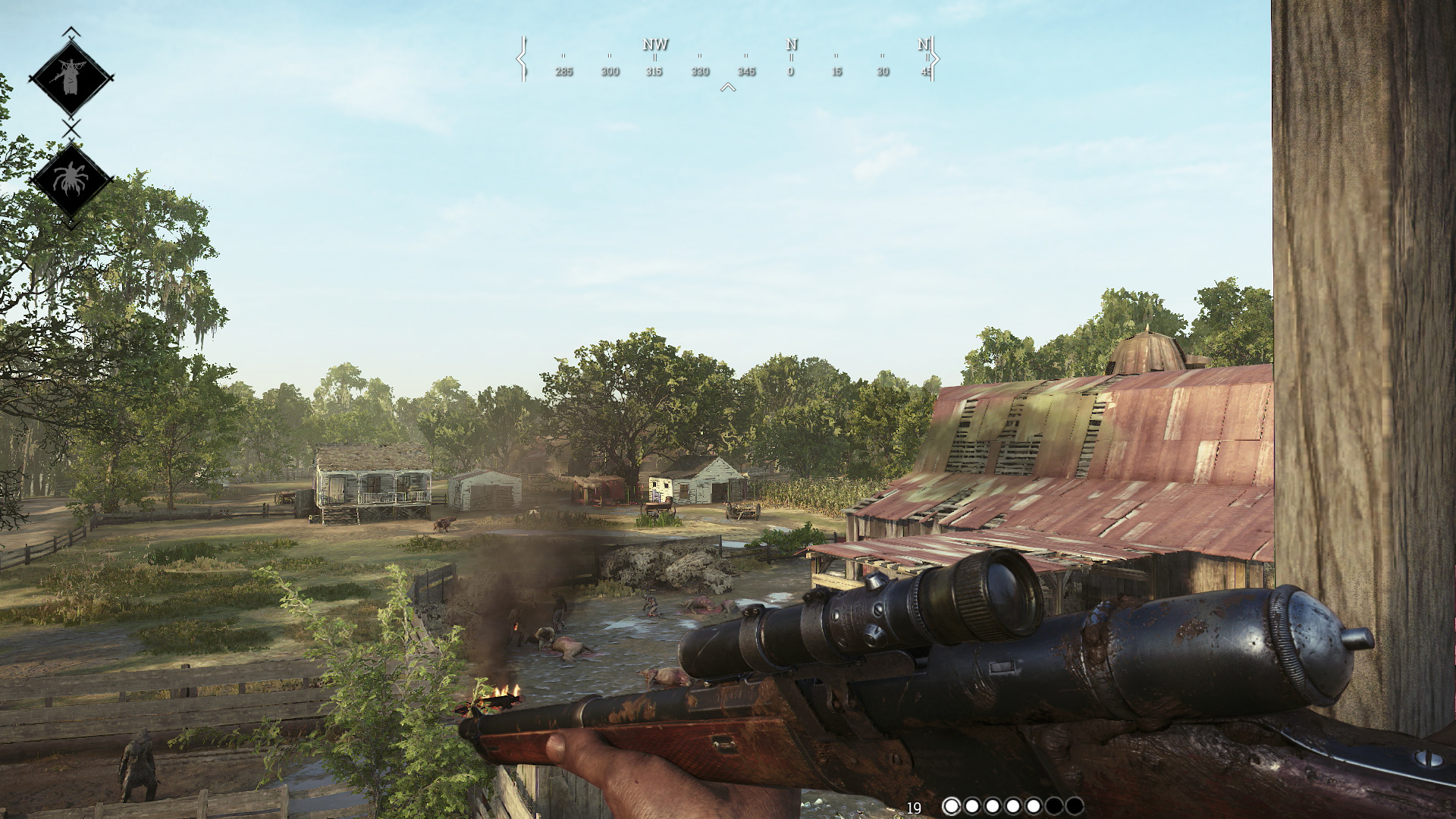 There is some obvious strategy in how you pace yourself in the game and stealth is also a big part of it – by sneaking and avoiding animals (which can make noise if Hunters are nearby) and hostile creatures (such as the regular zombies that plague the map very frequently, alongside other more rare enemies that also give larger rewards once killed when the game’s over), you can increase odds of using enemy hunters as bait for the boss or the extraction instead of just going in guns blazing (which you can, it has worked for me quite well too actually).

Level design is great, with lots of locations with loot and places to hide and investigate. The map is great to explore… if you don’t get a bullet through your skull in the middle of your stroll down that old western swamp.

Yes. You read “western” right. With an old school, western vibe, Hunt: Showdown manages to innovate even in its setting. Revolvers, old 1800’s machine guns, repeater rifles and so on will constitute most of the available arsenal, with the occasional oil lamp you can throw to start a nice fire near that pesky camper! The gameplay is slower due to this, with most of the weapon requiring slow, single shell reloads and requiring a lever/bolt action after every shot (this doesn’t apply to machine guns and such but those aren’t that great so there’s no point in using them – not all guns have great balance or an ideal role, sadly).

Multiplayer sessions can be played in solos, duos or trios, or you can play Quickplay mode, which gives you a temporary hunter and matches take a much shorter time to finish (averaging 15 minutes instead of the regular Bounty Hunt’s 40 minutes) and are a great way to play a quick match, learn and improve your combat ability (which is quite punishing for beginners) before entering the main Bounty Hunt mode.

Speaking of temporary hunters above, I should mention the whole metagame behind Hunt which is pretty interesting. You have characters associated with your profile/account, which are called “Hunters” – they have a name, a certain look and a loadout. You can recruit more hunters to your profile party by buying them with coins that you gain at a pretty good rate after each match. These hunters have perk cards you can slot to the loadout (and if unlocked, you can slot consumables and change their weapon loadouts too). The hunter becomes increasingly more powerful as you play Bounty Hunt and level him/her up, unlocking more card slots and thus, making the hunter more powerful; however, and this is where the most interesting part is revealed, if your hunter dies in a Bounty Hunt match, you will lose that hunter forever.
This makes each game be incredibly tense to not only try to escape with some loot but also rationalize how you escape – do you get greedy and loot/farm a lot, risking your hunter’s life? Or do attempt a sprint through a boss or a bounty-holding hunter and escape quickly, but reducing rewards for your hunter in the after match report? It’s a frankly brilliant idea, making people take the game seriously and giving it a competitive edge I didn’t expect to find here, it adds a much-needed amount of tension as you find yourself playing to win, but also to protect your very own Hunter, with whom you may have spent hours playing and surviving together. 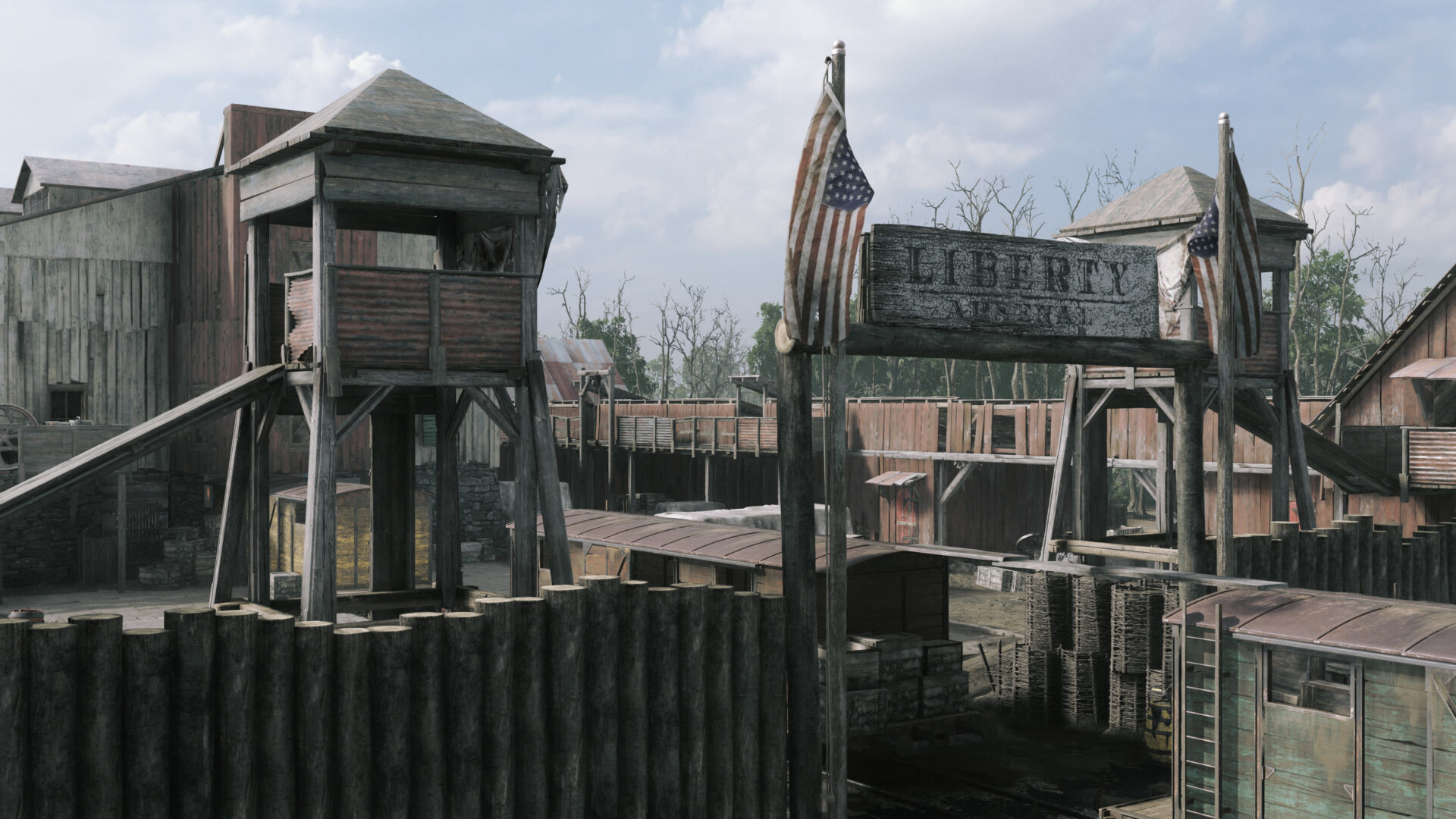 Another component of this metagame is the store/loadouts. There is a premium currency you can use to buy Legendary Gear, which is nothing but skins for existing weapons as far as I’m aware. There was even a free Legendary Revolver available and it had no better stats compared to the original revolver. However, to unlock the regular stuff, be it health syringes and other consumables or offensive gear such as weapons, you need to usually complete challenges to unlock them, and then you can buy them with the in-game coins so you can have that gear available to slot in your Hunter’s loadout. If the hunter dies like I mentioned above… there goes all the guns and consumables you bought and equipped that hunter with, you’ll have to buy them all over again.

This is a fantastic albeit slightly too grindy (thankfully, the developers are listening to feedback and in a recent patch, tweaked and made a few of the challenges easier to complete) idea and makes absolutely EVERYTHING in this game matter! The loop of getting coins and XP to level up and get a better Hunter and be able to buy him better gear, all while playing to win and not die so as to not lose all the XP and gear you worked hard for makes for one of the most intense experiences of the year and every system and mechanic in this game matter and don’t feel like an afterthought, as is traditional for most Multiplayer games currently being played. Hunt deserves nothing but praise for such a neat and unique idea that manages to not only be fun and meaningful, but also be balanced as to not make the player feel like the game is nothing but a grind fest.

Being a Crytek game, Hunt looks really good as expected, thanks to the Cryengine. The overall art style is different from anything the studio has made before. Seeing a western horror theme in the Cryengine is something I never expected to say in my life but here we are… and it looks as glorious as you’d expect. From the draw distance to the attention to detail in the guns, animations and overall design and look of the enemies, animals and buildings, Hunt manages to give the player a great world not only to explore and adventure in, but also to look at and admire. I honestly would like to see a Single-Player campaign in this setting, the uniqueness of it is that great! 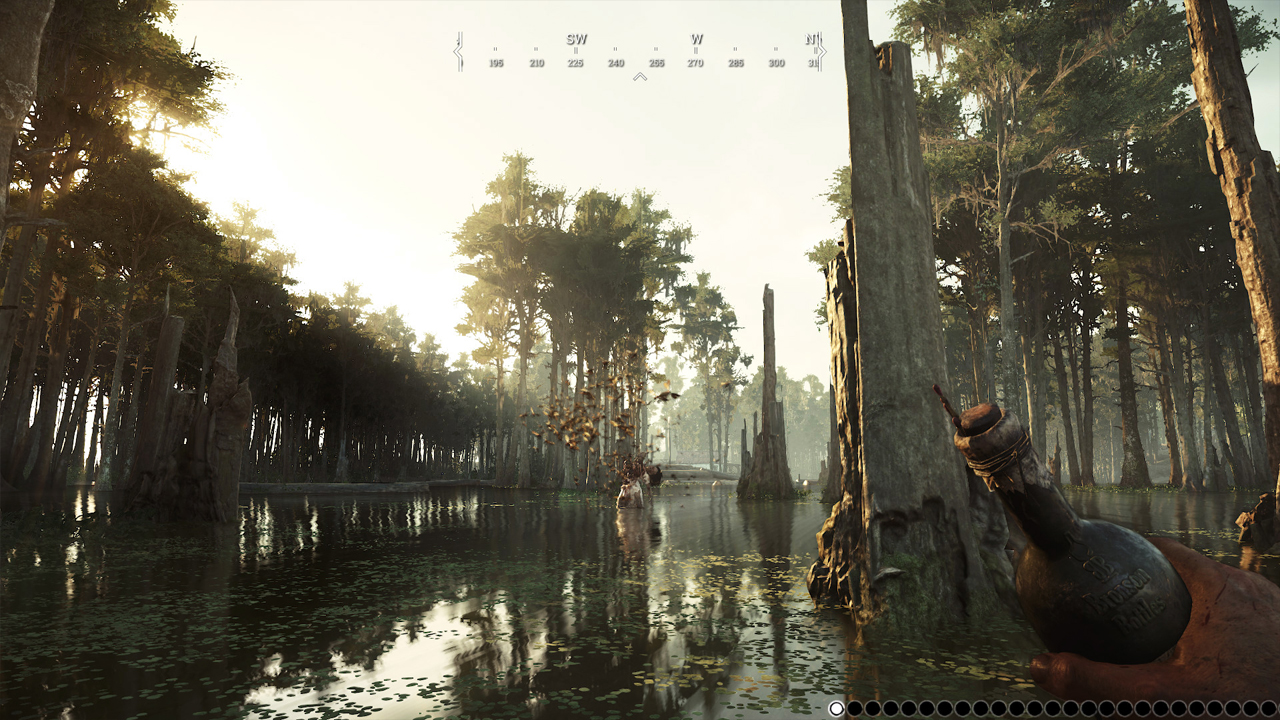 There are also a plethora of graphics options to change for lower systems to enjoy the game, and the game can run well on lower-end systems, though I still was met with some frame drops that shouldn’t have happened, from regular 60 to the 30’s which is unacceptable, especially when not that much is happening on the screen aside from a fire and some shooting, each match is not populated with 100+ players like The Division or a Battle Royale game so the performance dips make little to no sense.

On the audio department, stellar. Absolutely phenomenal. From the little music there is (which is fantastic), to the gun sounds, ambient sounds and all matter of effects – they are crisp and impactful making combat feel even more of a treat. Surround sound with a good pair of headphones makes Hunt feel like a great experience overall, not just to look at but also to immerse yourself with the great audio quality the Crytek engine is paired with.

There isn’t a lot wrong with Hunt in all honesty. While it could use some more variety, maybe a darker map to enhance the horror vibes the game transmits or a new game mode, the gameplay is solid enough for those wanting a nice multiplayer experience, with battle royale and looting elements. The PvE sets it apart and the whole metagame surrounding losing your character and gear adds a great deal of tension not many Multiplayer shooters manage to pull off. The repetition may hurt it even for multiplayer-focused gamers and the performance drops can be a big annoyance in more tense moments, where you should have the framerate at your side, but that isn’t keeping me from recommending it, especially with friends.