Not only a great adaptation of the Blair Witch IP, but also a great entry to gaming’s horror genre.

Ever since 1999’s The Blair Witch Project, multiple iterations of this IP have been made – from the terrible Book of Shadows sequel (which only had the ending credits song going for it, honestly) to the multiple video games, books and inspired movies such as Paranormal Activity franchise.

And after all this, all these 20 years of mostly garbage, Bloober Team’s Blair Witch is not only the studio’s best game to date, but also pretty much nails what a Blair Witch game should be and becomes the best thing since the 1999 original classic – hurt by some poor gameplay choices, the game doesn’t reach as high as it could, but a solid narrative and a terrific setting with fresh mechanics help it be one of the best horror experiences I’ve had since 2014’s Alien Isolation.

An opening cutscene and little tutorial will introduce you to the game’s premise – you are Ellis, a man with a troubled past who is accompanied by Bullet, a loyal dog which will be central to the gameplay (which I’ll talk more about later). A kid named Peter is known to be missing in the iconic Black Hills Forest and you set out to help the search parties find Peter, alongside your trusting dog. 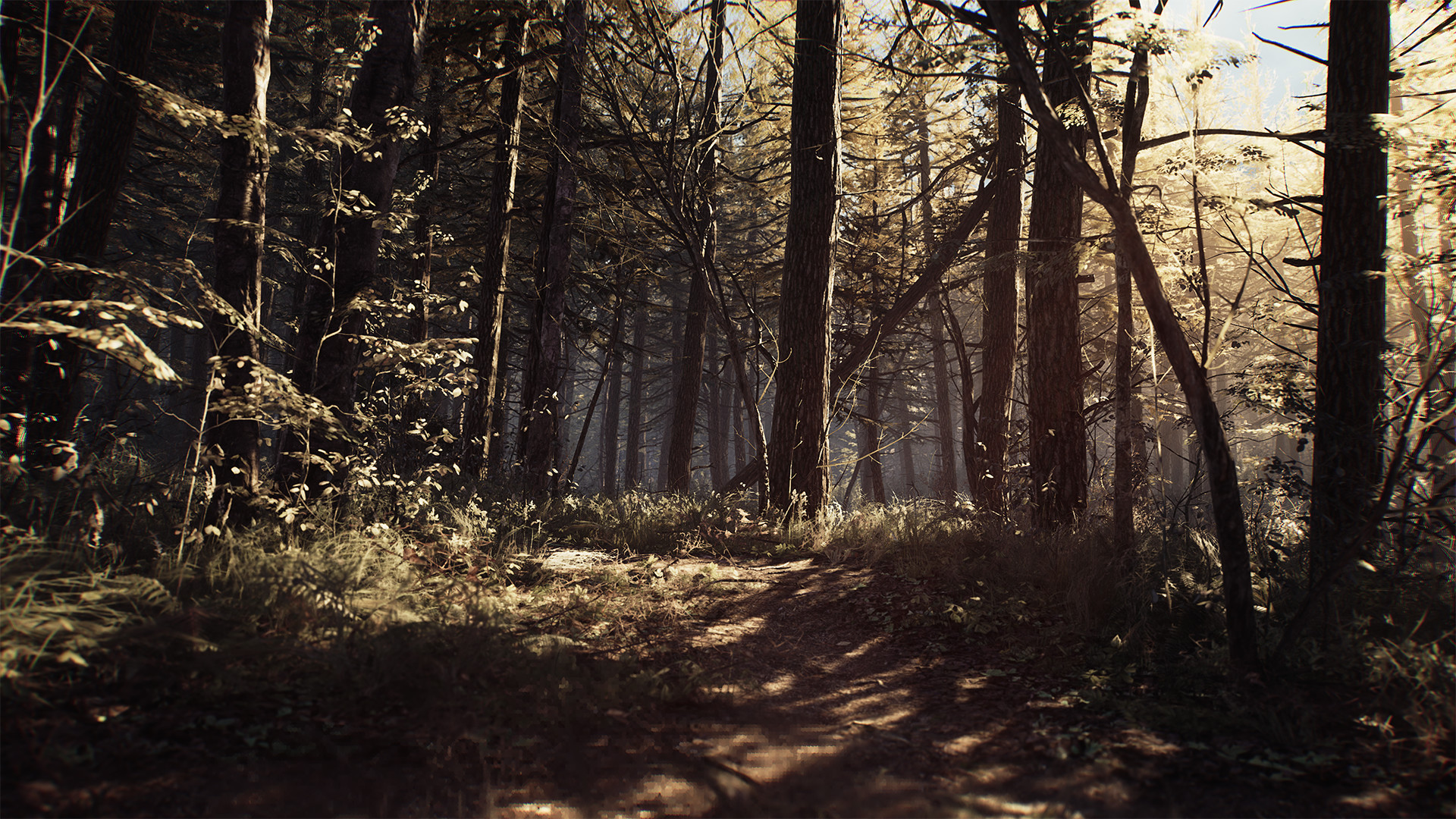 The rest of how the plot develops (and in particular, how it ends) is surprisingly presented according to your actions (which are defined in a very low-key manner to the point you are never locked behind a choice screen like most games). Multiple endings are present – there is a central end to the story with little variations of each, depending on how you acted towards other characters. This massively encourages replayability due to the game’s short length and the multiple endings that differ from each other and are not easy to obtain, so working towards those endings and finding the ways to unlock them are a great mechanic to add value to this arguably short game (it took me only 5 hours to beat).

The gameplay ties well to the story but also has some big misses that could’ve been designed far better.

Starting with the good, I must absolutely scream out of my lungs that the dog mechanic is brilliant – easily one of the best AI companions of all time, up there with Elizabeth from Bioshock Infinite or Ellie from The Last of Us. The AI is pretty much rock solid – Bullet will act loyal and follow orders as an AI should but have some unpredictable actions fitting of how dog companion would behave, all while never making you feel like you’re losing control of him or he’s ignoring your commands. You can command Bullet to come to you in case he goes too far from you, seek any important items near your area, stay close to you (just like he backs you up, you should back him up whenever danger approaches), pet him (yes, pet him!) and so on…

The dog doesn’t get in the way of the story and with such a solid AI and a great sense of control over your canine partner, you end up creating a strong bond with him and this is probably the best part of the game. And yes, I’m a dog kind of guy.

Moving on, the forest environment is great. The atmosphere oozes this eeriness that the original movie also portrayed really well and it’s also a semi open world (albeit quite short) as after certain events, the forest will lock some of its areas as the story progresses and you’ll end up losing on potential collectibles (and endings too). Explore while you can and try to draw a mental map as you explore the Black Hills Forest as losing yourself is quite easy (and while it can be annoying, it makes sense in the scope of something as a Blair Witch game), even I found myself lost once or twice when my mental drawings ended up screwing me.

And finally, the puzzles. While extremely simplistic, the puzzles are fun and interesting thanks to a mechanic the game introduces in the early-mid game. Sadly, the puzzles are all about using that same mechanic and after doing one or two, you’ll just know how to do every single other puzzle the game presents you and as such, I won’t spoil what its about as it’s far more fun to figure out yourself the first time around.
It worth noting however, one particular puzzle went against every logic of the mechanic presented in order to stretch the gameplay a bit and give you a bit more combat so if you feel stuck, don’t worry and explore around with Bullet.

And as I just mentioned, there is combat, and it’s not very good.

Entering the negative parts here, the combat is an excellent opener – similar to Alan Wake, you’ll be facing monsters (it’s just one monster type the entire game) that you need to point your flashlight to in order to “burn them out”. The monsters are really agile, pretty much invisible (though I managed to spot a few very far in between), and will attack you. How can you find them?

Bullet will bark and growl while pointing at the location of the forest monsters, so you need to stick close to bullet and pay attention to his movements in order to protect him, while he points at the monsters so you can clear them out with your flashlight, enhancing this bond of protection between you and the dog and the giving the game some much needed tension. The problem with the combat, despite all the great ideas behind it, is the fact that you soon figure out it’s SCRIPTED and occurs about 6 lousy times the entire game. By the point you reach the midgame, you’ll notice how meaningless the combat is – it’s as scripted as a puzzle section and takes away any tension you may have when exploring.

It doesn’t matter, you’re not getting jumped by any forest monsters or imminent danger unless the game’s script tells you are. Thus, Blair Witch ends up being a psychological walking simulator rather than a typical survival horror experience.

It doesn’t help that the combat happens very little and is scripted, but the fact that it’s also TOO EASY (I died once in the entire game due to stressing over having multiple monsters around me, so the combat can be tense if you’re still figuring it out, too bad that it should happen more often and unpredictably), completely takes away any remaining tension you have after the second fight or so when you’ve mastered it – Bullet points, you aim the flashlight, done.
The game could’ve used some enemy variation, or even better – no enemies and skip the combat, adding some other paranormal elements instead. The Blair Witch is all about being scared about what you can’t see, making it way worse than anything visible a game (or movie) can throw at you. And I agree with this statement: the presence of monsters in this game is a bit of a miss in the gameplay department in my eyes. By the end, you’ll find monsters you can’t look at and must traverse around them while not looking and it’s such a more tense and enjoyable experience that the first half failed to capture.

Ultimately, the combat happens so little it doesn’t ruin the game much and ends up being nothing but a minor issue for me.

In a horror game, a great blend of immersive UI/graphics and atmospheric sound design is vital for a great experience and Blair Witch succeeds with flying colors. The graphics are great – the Unreal Engine 4 is very well used here. A lot of customizable options are available and the various effects you encounter during the game (you’ll have a lot of day/night cycle changes, flashbacks to other places, etc.) are expertly made, from fire to fog, from trees to houses (broken or intact). The texture quality is solid and the animations are really good, Bullet in particular looks and acts very realistically which adds a ton to the immersion factor since you’ll be with him pretty much all the time.

Sound is very immersive, it also helps you identify the location of enemies (and Bullet in case he strays off) and just hearing leaves roll or birds chip adds a ton to the overall immersion factor of the game. From footsteps to Bullet’s barking, all sounds are crisp and enhance an already visually stunning experience.

My only gripe with the technical side of the game is that sadly, while the Unreal Engine 4 is well used for the overall presentation, the performance is near abysmal.
I’ve struggled to even hit 40FPS at 1080p Lowest settings on my GTX 1060 + i7 7700K. Blair Witch looks really good, but it should not be pushing my PC to its absolute limit when some arguably better looking games can run far better than this.
The assets are repeated often due to the forest environment so there isn’t an abuse of details around the game to explain such poor performance. Despite a couple technical patches being released, none addressed performance so be on the lookout for a performance patch before purchasing this game if your GPU and CPU are lower than mine as you’ll probably have to run at 720p in order to get an acceptable framerate.

A solid horror experience overall. The combat has poor design in its simplicity and lack of variation, which is worsened by the fact it’s scripted and the performance is really bad; despite these two problems, the good story and characters (Bullet in particular is a masterpiece of a companion and mechanic at the same time), the great non-linear design of the game itself and the overall replayability are enough pros to outweigh the cons and I have no trouble at all in recommending Blair Witch for the asking price of 29,99€.

One of my favorite horror games of the past few years by far, definitely replaying it a few times to hunt the various endings and gather all collectibles.