Forget the mystery, go hang out with your new friends!

With Worldend Syndrome you jump into the shoes of a high school boy who’s currently moving to a new city to escape from a recent tragedy. In an effort to run from his past, he turned to the quiet seaside life of Mihate Town where no one knows him. It also helps that our protagonist has somewhere to stay here in the form of his uncle’s mansion. Well, if he thinks that his stranger status will stay intact throughout, he has another thing coming.

You don’t even arrive at Mihate Town before meeting someone who’s visiting the town. Trying to sleep off the train ride, you’re woken by another passenger, Yukino, who’s visiting Mihate Town for research in an upcoming magazine article. That mansion you thought you had all to yourself? Well, it turns out that your uncle forgot to say that your cousin, Maimi, will be keeping you company. Your range of possible friends also grows when you finally arrive at your new school. Being as lucky (or unlucky) as you are, you sit by Kensuke who is particularly obsessed with cute girls and joining the club your teacher, Kaori, runs. Of course, he can’t just let you not try and get in (while riding on your invitation to join as well). There you also become acquainted with your soft-spoken classmate Miu, a rich freshman known as Saya, a shy girl named Hanako, as well as Maimi and Yukino (who’s more of an honorary member). 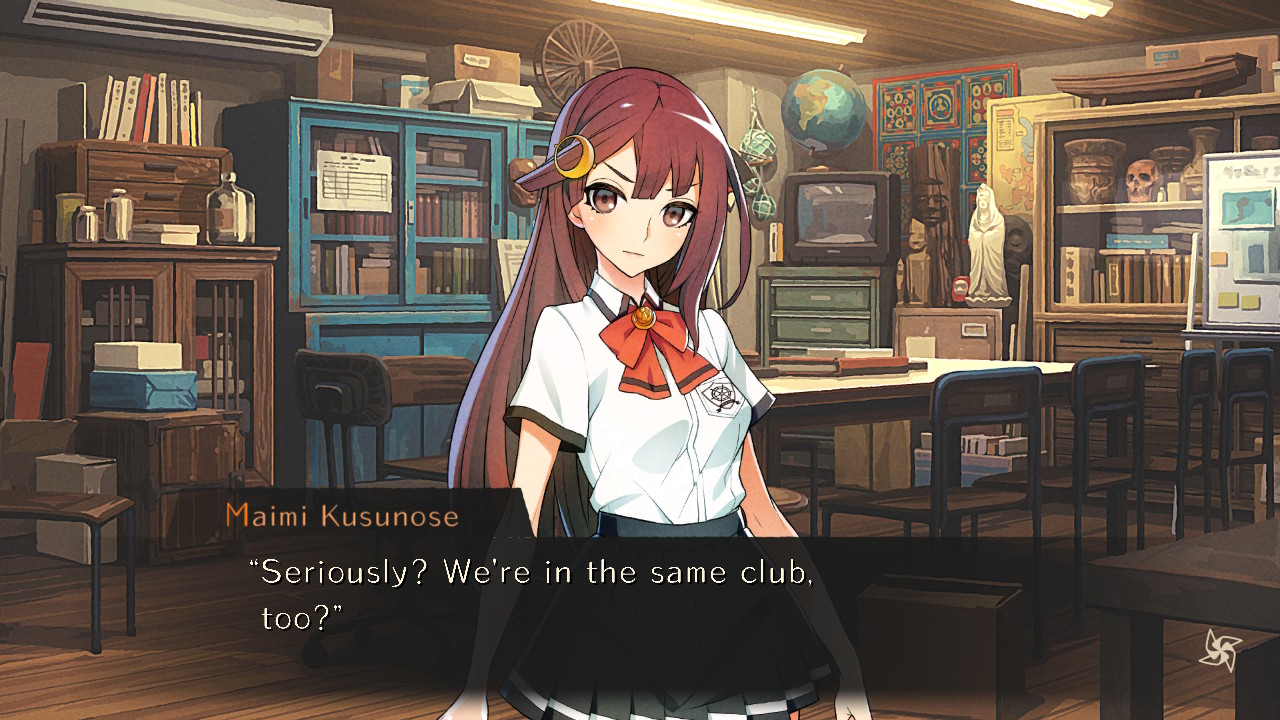 Kaori’s Mystery Club (or Tribal Studies Research Club) is a tight-knit club that is currently focused on the Yomibito legend that surrounds Mihate Town. The Yomibito legend comes from a belief that every 100 years at least one dead person is temporarily revived. This resurrected person is called a Yomibito and it’s a sign of upcoming misfortune. As summer comes closer to ending, the Yomibito loses their sanity and murders the living in the hope to be alive once again. The only way to prevent it is to somehow figure out who it is and destroy it. However, it’s not easy and not even the Yomibito knows that they died. If they did, I would hope they wouldn’t ride it out till they murdered everybody. 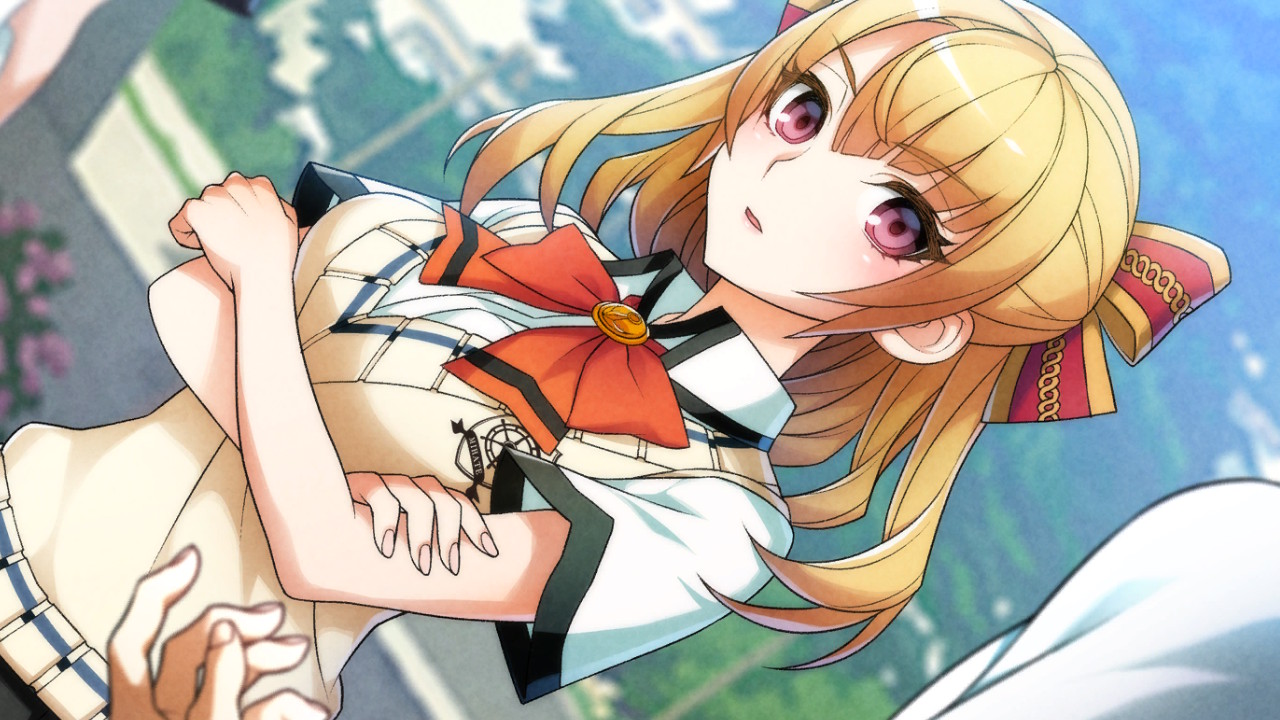 Well, it turns out that the very year the protagonist moves to Mihate town is the 100th year since the last one showed up. The Yomibito legend is just a legend right? The recently missing student must be someone riding the legend to get away with their crimes. Well… a shocking event towards the end of the summer says otherwise and you have reached an ending.

Or more accurately, you just ran into the worst ending and it’s a look into what could happen. If you pick up Worldend Syndrome, whether buying the whole game or playing the demo (though you won’t get past this part), this is actually intentional. Once you reload, or restart if you didn’t save, you’ll notice that there’s a new option that will send you past the prologue and finally to the meat of this visual novel. 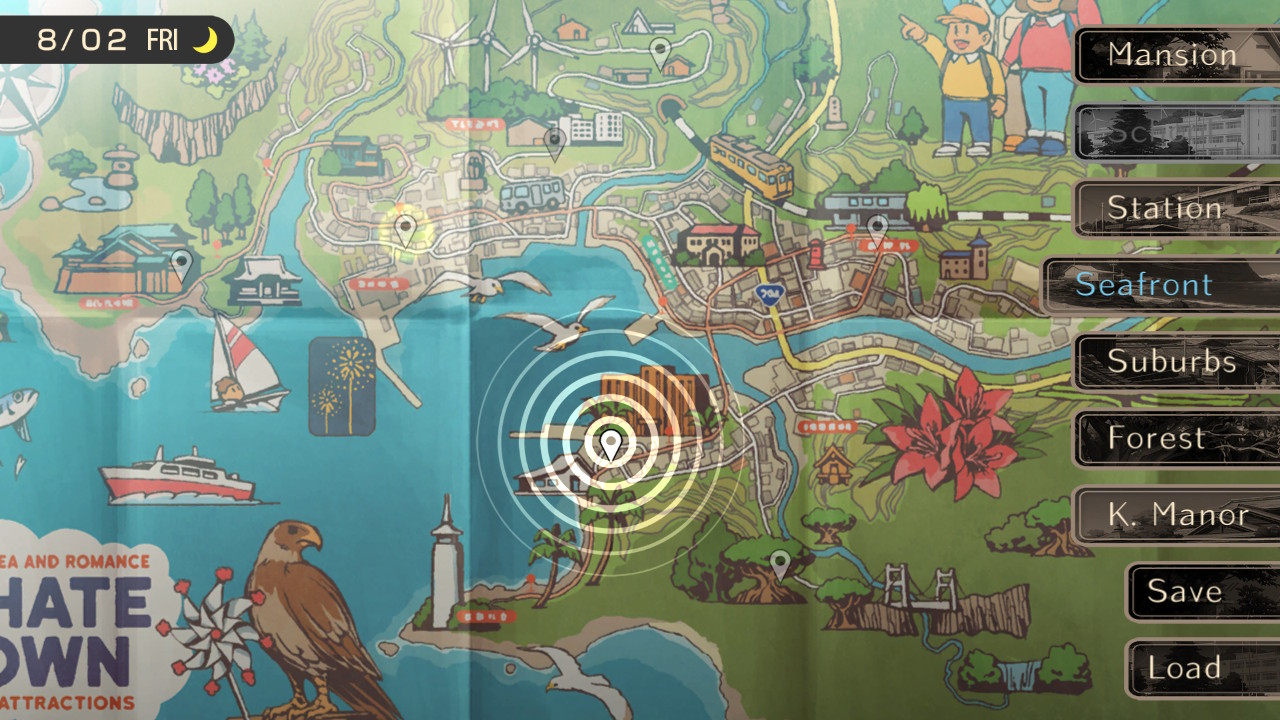 The vast majority of Worldend Syndrome happens during August and here you’re really just visiting the various places Mihate Town has as days pass. Each day, you’ll be greeted with the town map and choose three locations that you want to visit at three different times (morning, afternoon, night) with the exception of events like the Mystery Club meetings. Each location also has sub-areas that you can visit as well. Depending on where you visit and at what time, you can run into one of the characters. If you run into anyone from the Mystery Club, which mostly happen to be possible romance options, you’ll notice that a color will flash around them towards the end of the encounter. This happens whether it’s a short hello, a quick glance, or actually having a meaningful conversation. The reason this happens isn’t told to you until you’re close to the endgame, but I’ll tell you now. What you’re seeing are the character’s auras and this is mainly used towards character events. The more face time you put in, the closer you get to their character event (and from what I understand leads you to their romance route and ending). 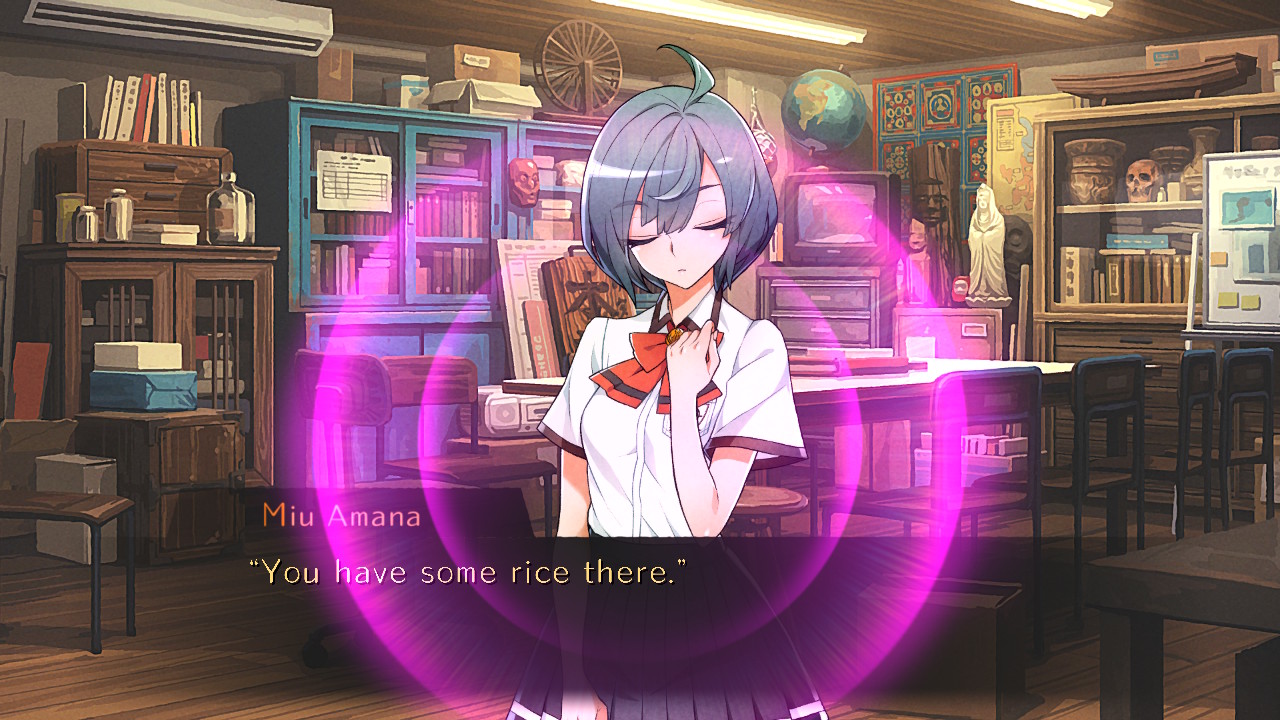 With the map not telling you where everyone is unless you have visited it before, this does mean that you’re going to have to brute force it. There are a few times when you get some areas sending out a signal, but that’s usually for specific events. Luckily for us, walkthrough guides exists! If you’d rather not go through the tediousness of reloading, I do recommend looking up a guide. Apart from my first playthrough, I just used a guide to help me through the rest

In addition to increasing aura points with each of the girls, you can also find items and accept missions. Both are optional, but most missions do award useful items. Brochures, which let you access the tips after the fact, and a handbook that tracks your aura progress are rewarded by missions. If you’re having a hard time figuring out where you’re supposed to go for a mission or want to find the collectible items without any fuss, there is a guide that you can check out. 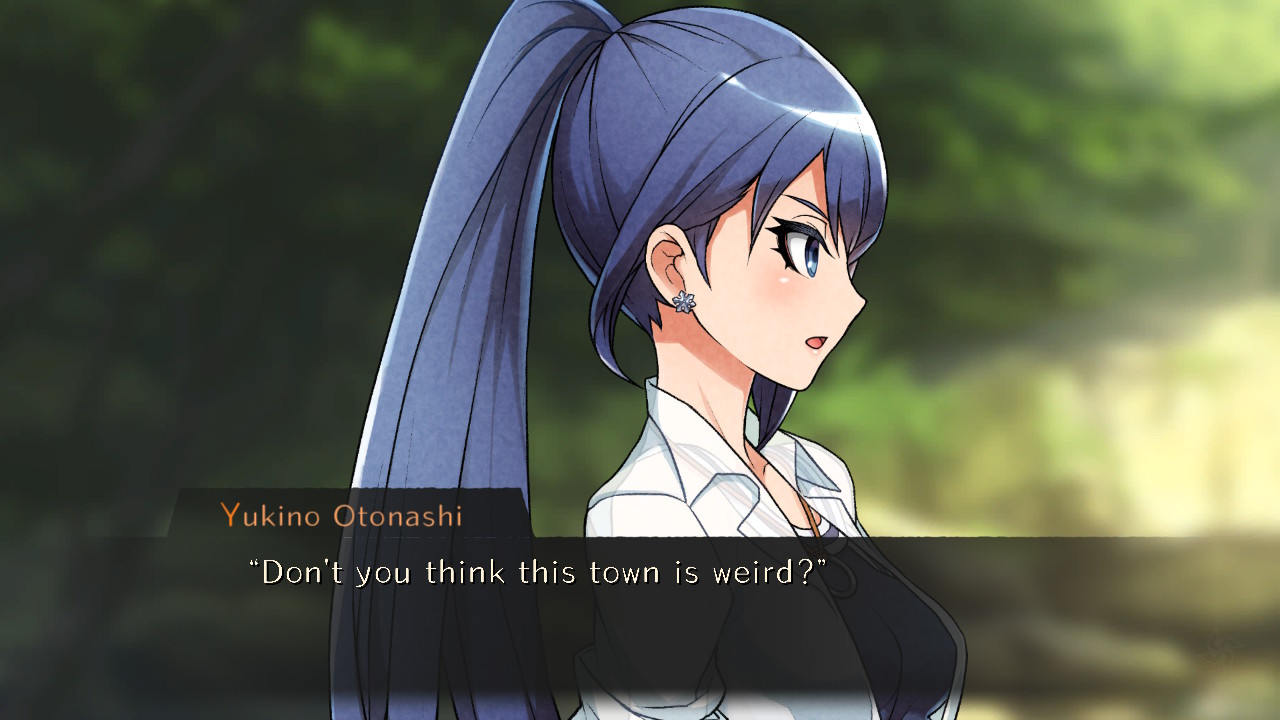 Worldend Syndrome’s save system is a weird one. You can’t exactly save the game at any point or load a previous save file. This isn’t a big problem, since you get a lot of opportunities to save with each scene change or on the map screen (the prologue itself asks like 20 times). However, you can only load on the map screen so any other time you’ll have to go to the title screen. In addition, the game will also save what you did no matter if you manually saved or not. So the missions, items, locations you visited, and routes you completed (which also has a small downside) will be saved when you replay or reload. 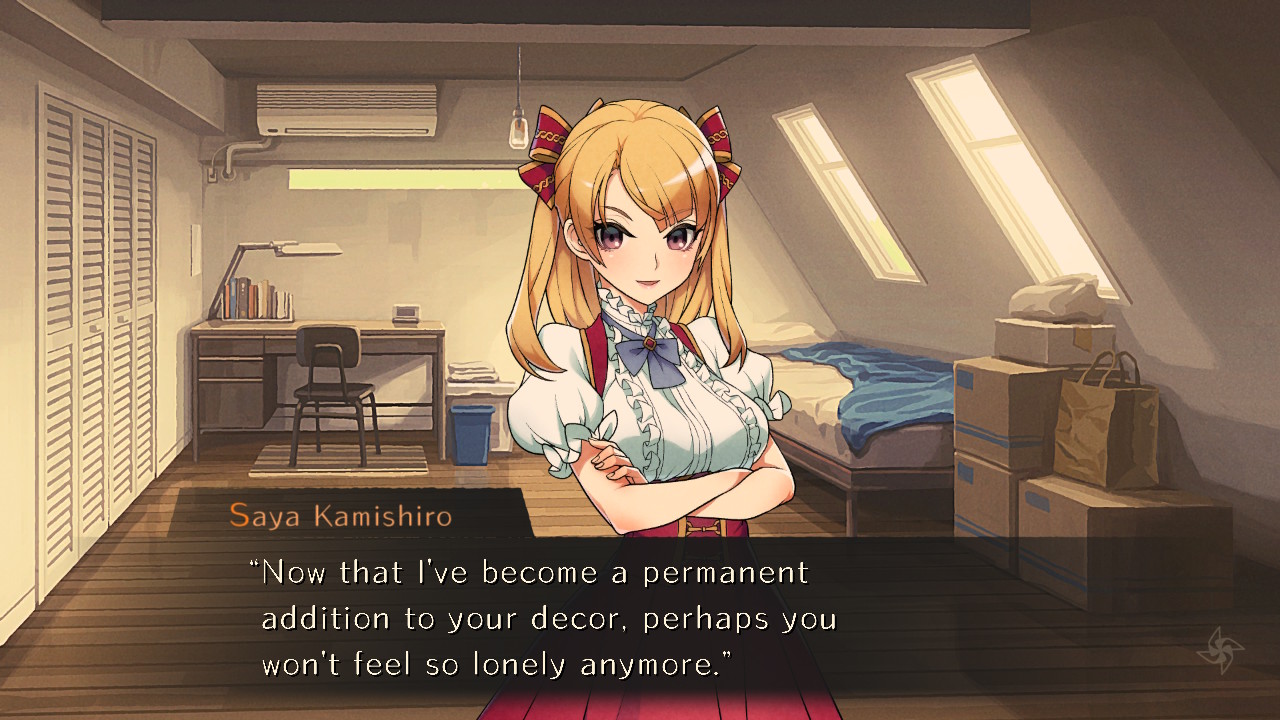 This is going to be a bit spoilery, but not all the routes are available right away. One route only opens after getting enough aura points and two open after you complete the other routes (which are forced routes). The downside to this is that you can’t replay the previous routes due to this. Also if you’ve been wondering where the Yomibito mystery went, and trust me I was wondering too, it’s because Worldend Syndrome puts focus on the slice of life aspect. You get little hints of it with the first three routes, but it comes more into play with the last two (with the last route honestly being the best one).

While on this, I also recommend pressing New Game when starting a new route rather than reloading a save before the prologue’s end. You won’t be directed to the prologue, but instead asked if you want to change your name and if you want to start at the prologue or after (which is labeled as Chapter). There’s a short video that is slowly revealed with each completed route which I thought was cool. 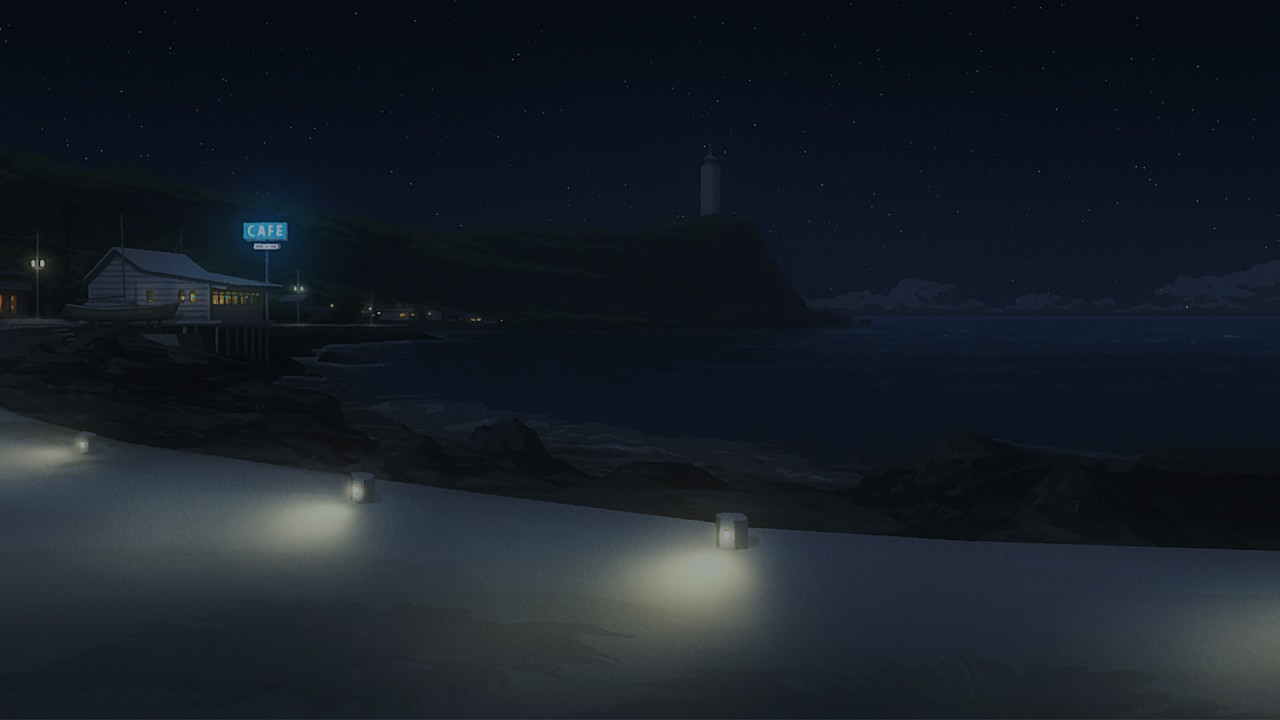 As Worldend Syndrome seems to focus on being a slice of life for most of the runtime, you’ll at least be looking at some beautiful backgrounds and character art. The background art, in particular, will be slightly animated as you can notice water flowing or the wind blowing through pinwheels. In addition, most of Worldend Syndrome is nicely voice acted in Japanese with the translation having a few errors and one section that isn’t translated. 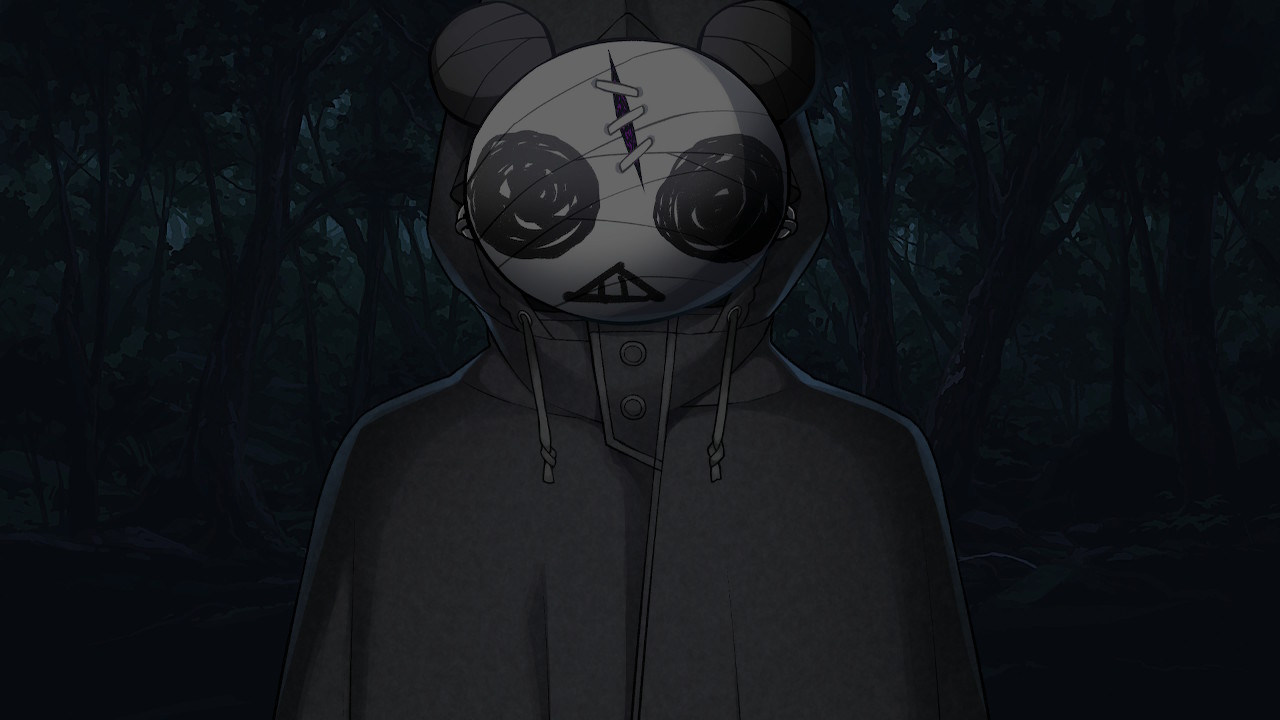 If you’re looking for a visual novel that focuses more on the horror mystery aspect, I wouldn’t pick up Worldend Syndrome. Instead, play Worldend Syndrome for the slice of life aspect with a sprinkle of mystery around the edges. I was a little disappointed with this visual novel since I was expecting more on the horror mystery front (which being freshly done with Death Mark when I first heard about this game may have attributed to), I didn’t mind and liked the slice of life aspect that you have to play through before getting to the great true route/ending.