REVIEW: Kotodama: The 7 Mysteries of Fujisawa

The truth will strip you free. Uncover the truth behind the 7 Mysteries.

PQube’s first foray into their own IP

Fighting Games, Visual Novels and Indie Games are what the UK Publisher is known for. So it kind of makes sense that their first game is a Visual Novel but with a twist. Make no mistake. Kotodama: The 7 Mysteries of Fujisawa is developed by the Japanese developer Art. Co. in tandem with PQube. Even though PQube has a hand in it, it is a Japanese game through and through, including the voice acting.

It’s not a magnum epos like Our World Is Ended or a light VN like Tokyo School Life. It sits comfortably smack dab in the middle of them.
Ok, we know they have a proven history with publishing Visual Novels (good ones at that). Now the question is… Are their senses as good as they are when they are publishing? 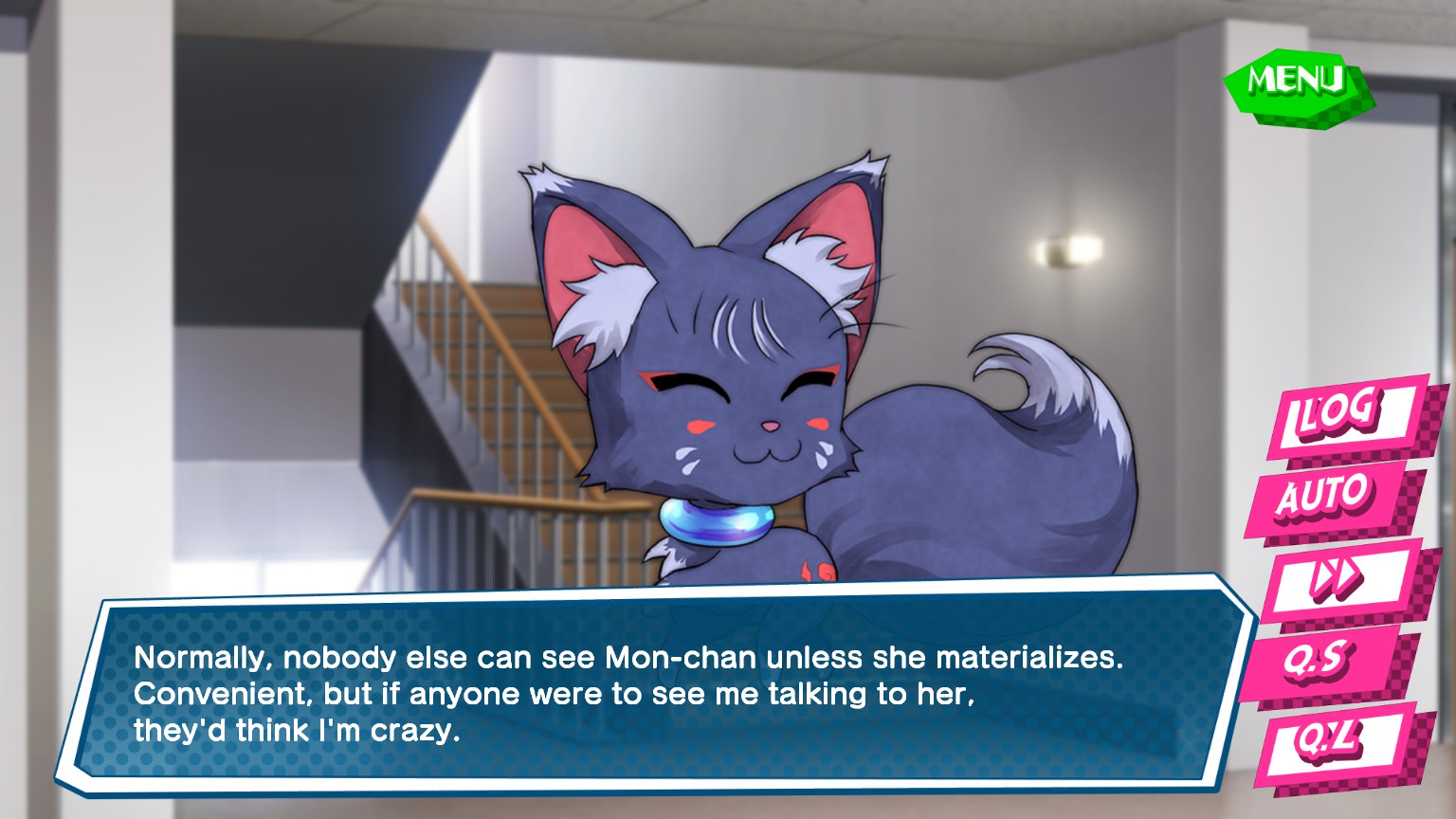 Your name is , , , Shiori Kannagi (default name) or any name of your liking. A new student (Male or Female) at Fujisawa Academy who comes in with a little secret, you have a contract with a demon called Mon-chan. A cute blue fox that bestows him/her a special ability. More about it later.

After walking around the campus to find your way around the place, a girl asks you about “The Curse of Mikoto”. She’s Nanami Kagura your trusty sidekick at Fujisawa Academy. Initially not interested you’re sucked into the Occult Research Club also known as ORC. You could say you are finding yourself in a storm in a teacup… Or are you?

Eventually you meet the White Wolf, a Gentleman at Night who answers all of your questions over a friendly tea break and has the power to make you smarter with just a touch. With that you begin to inquire about the unknown Fujisawa Academy Principal. That and many more are the 7 Mysteries of Fujisawa. The question is… What is the truth behind them? Aside from the usual talks with characters, there’s also an extra social media app called Quacker. The Quacker app provides direct access to the pulse of the academy and its students to help you unravel the mysteries.

This is where you come in. By contracting the demon Mon-chan you are given the supernatural ability to suck your opponent’s minds into your domain. In there you peel off their secrets gradually like an onion or a Matroska. Here’s the catch… For them. Your pervy mind visualizes their minds defense as clothing on the avatars (Nobody gets stripped in the real world). Peel them all off and they will spill their guts to you. Maybe.

The story is vaguely linear. You trot along the same kind of path but there might be things you have missed the first time around that can flip the case upside down. Be prepared for at least an alternate second round. The game focuses squarely on a character with each mystery, delivering a deeper dive into their circumstances. Not everyone is who they seem to be, for better or worse.

It seems straightforward and short in the beginning until you notice it’s only scratching the surface. Despite the relative no-frills exposition each character gets, it still makes you invested enough to want to peel the truth out of them. There are times where some of the twists caught me off-guard (not the subverting expectations way). So, mission accomplished in that regard. The Story and Characters were gripping enough to make me want to resolve the mysteries. 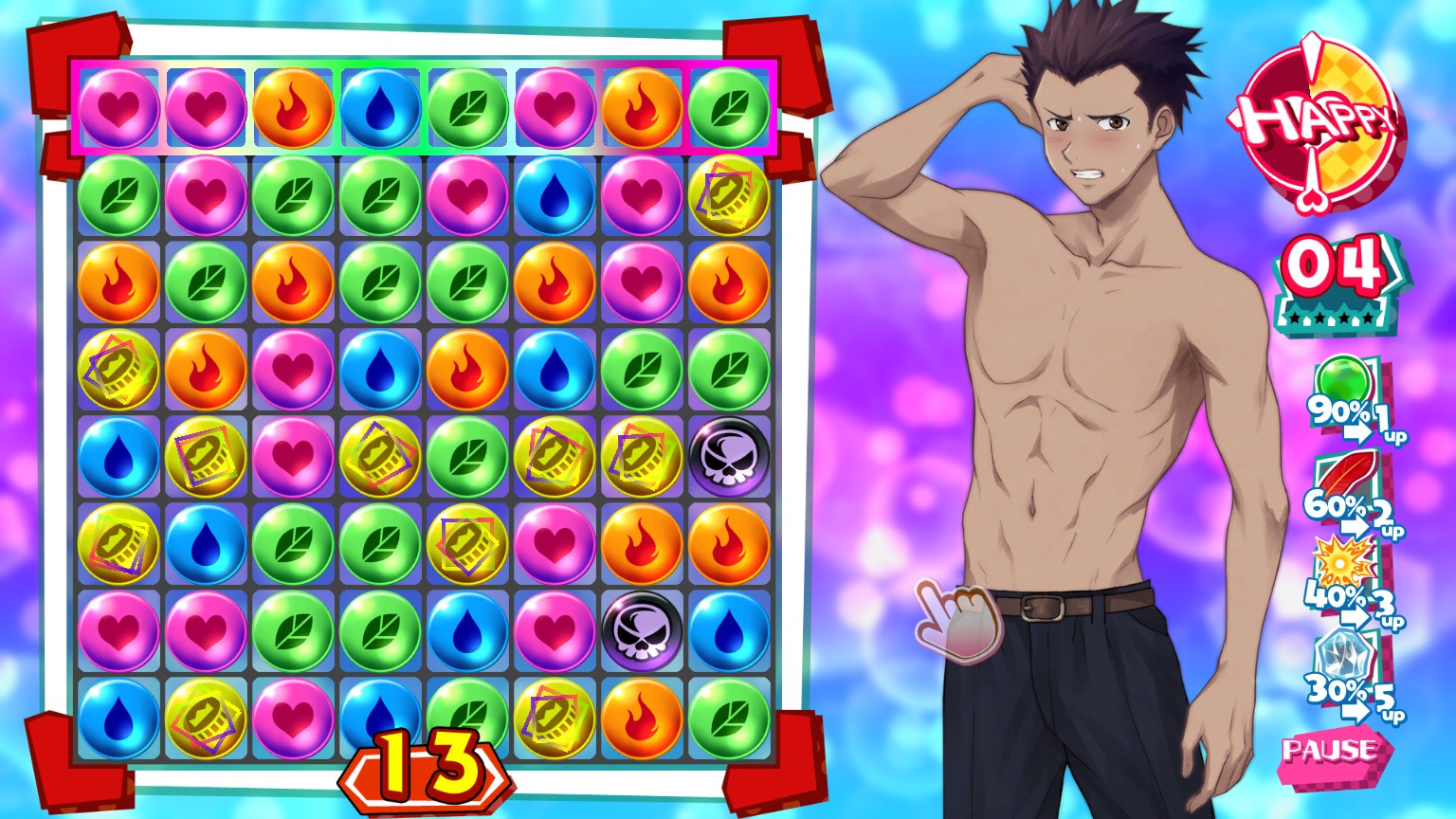 There are two things we have to talk about. The Puzzles and the VN part. The puzzle segments start the moment the main character unleashes his ability. At first, it looks like your generic “match 3” genre. That is not the case. It runs on a quite different rule set. You have 20 turns and you get 10 extra for every layer you peel off. You can only switch out the gems at the top or move a gem to the top. The latter makes the upper part shift downwards. It might not sound like much but it is because it requires a complete relearning of strategies to fit this new system.

The VN part is tied to the puzzle part by a level up system called the Word Book. Finding crucial information increases EXP of different gems and they can be leveled up to level three. On top of that, each character has a weak point that unlocks a special kind of gem that does massive damage, making its puzzle segments much easier. Not only are they important for the puzzle part, but they are also important towards the ending(s).

People who are having trouble with puzzles don’t have to worry. There are multiple fail-safes that either increase your margin of error or help you recognize potential options for your next move. What do they look like? Let’s start with the latter one first. When you are not moving around in the arena for a set amount of time, potential “match 3” moves are highlighted by moving gems. Take a look at them and make your strategic move.

The fail-safes are what you get by clearing up the field. After a certain amount, you get extra points to try and get extra turns. You can get up to five points but the higher the stakes the lower the chance of it being successful. Worse, there’s a chance where things can get dire. Managing the risks is certainly part of the strategy.

Neither a fail-safe nor a helper are the bonuses that you get for busting some nifty combos. Instead, they are things that reward strategy, increasing the depth. Those create special items on the field that can help you out, from an extra three turns to clearing away some of the gems.

If you like the Puzzles, you can access them freely in an extra menu where you can even choose the unlocked fashion items. The Puzzles are an interesting addition as a break up to the usual VN gameplay. It’s well thought out to the point where I could even see a VS mode being something people might want to see. 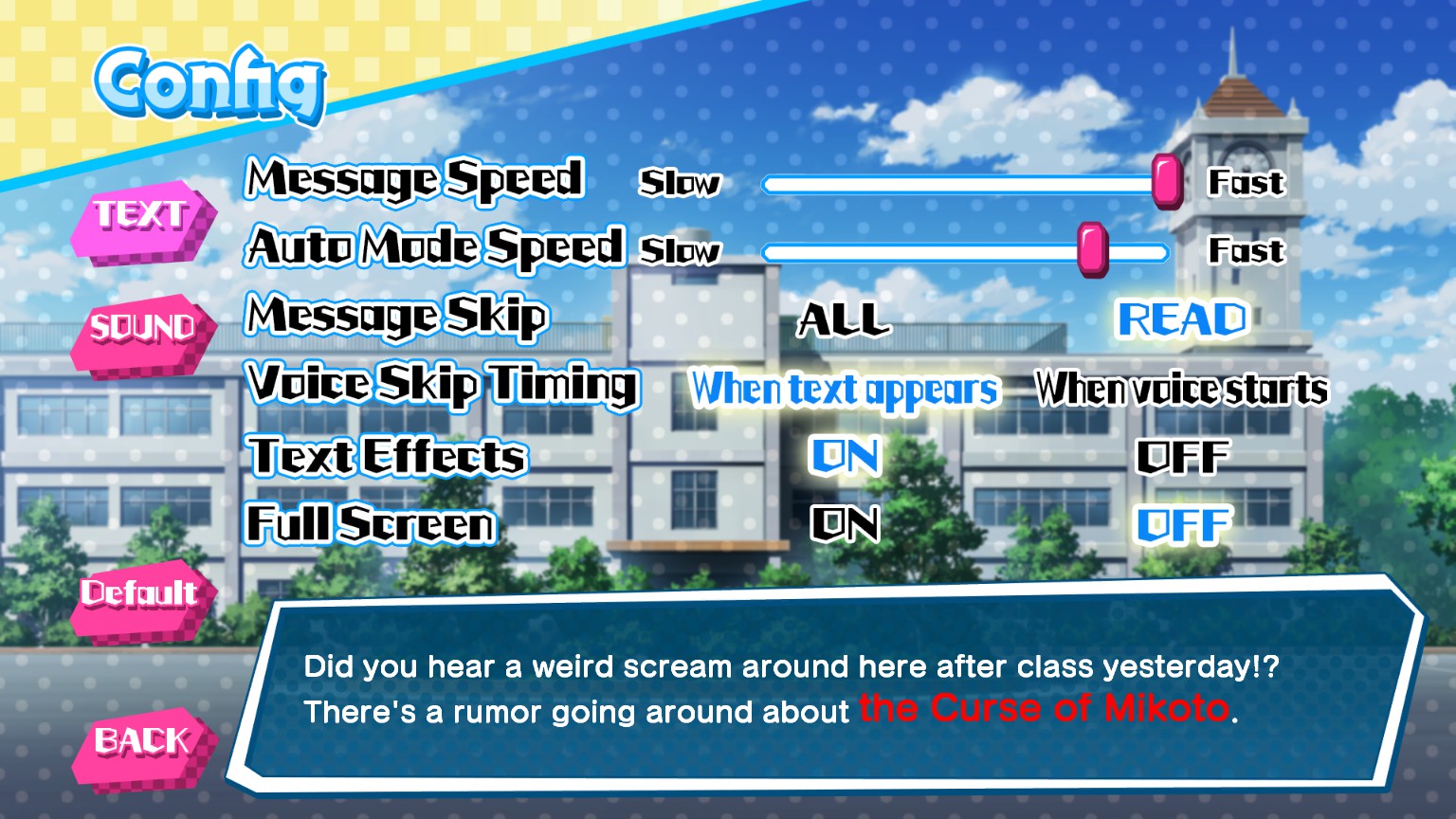 Unfortunately, this is where Kotodama: The 7 Mysteries of Fujisawa starts to falter a little bit. It comes with all the standard options as you can see in this screenshot of its options menu. Occasionally, you can decide where to go next. Sometimes it does make a difference where you decide to go first. 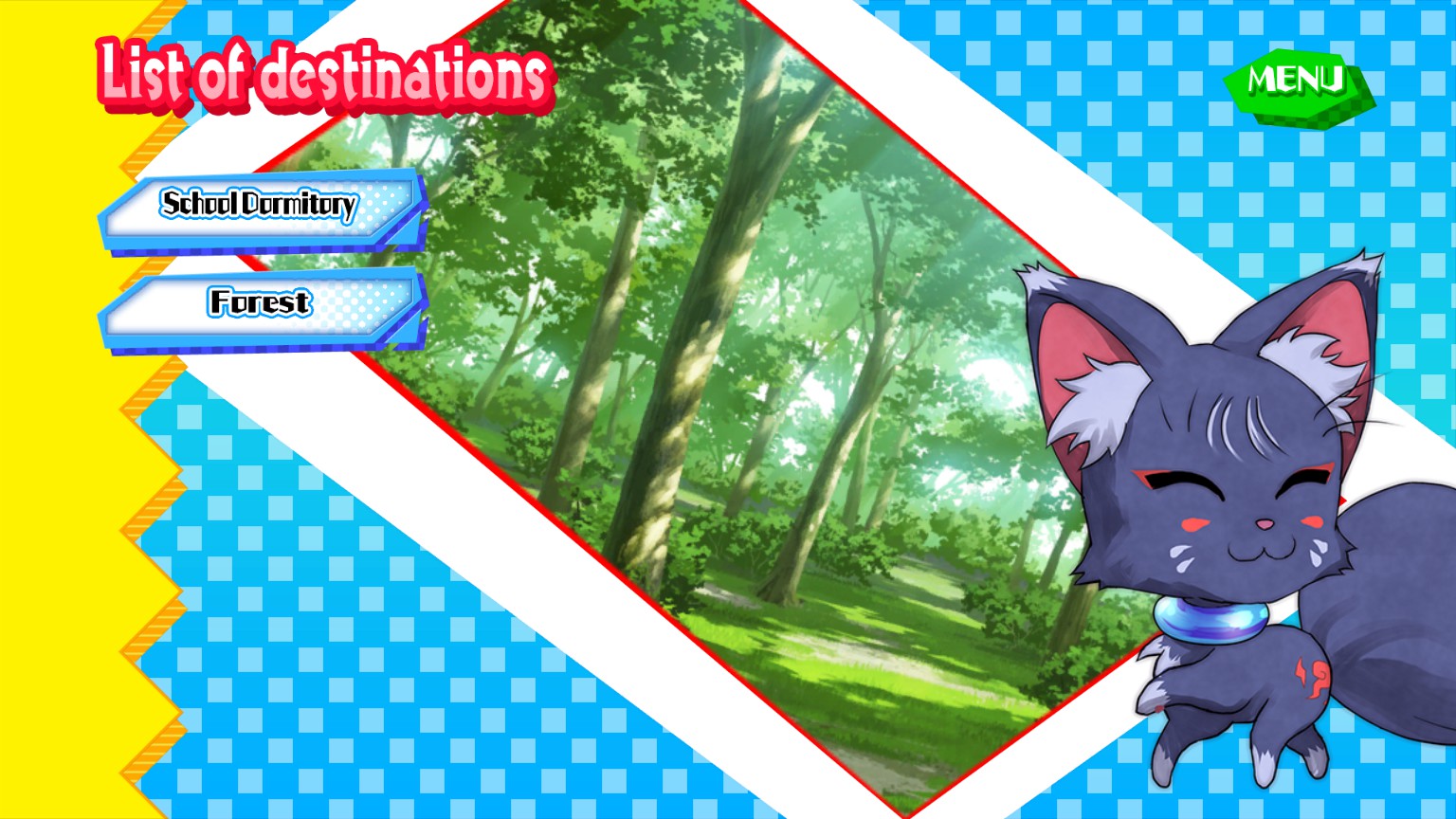 Let’s talk about what the game does right. Subsequent playthroughs have marked decisions. Unlike other VNs, it assists you by marking them with different colors. Red means good and Blue means bad. The skip function also skips animations and transitions which improves the repeat experience in case you’re going for other endings. The Tips section is another neat thing that summarizes your findings.

Here’s what can be a source of frustration. The entire story is sequential and you can’t choose your repeat point. This means you have to go through the full story to find the missing parts. Even with the skip function, it becomes a major time waster. Another big one are the puzzles that clash with the VN story part. They seriously break up the pace, pausing the story until you make it through them. It’s not seldom to spend at least 2 minutes or more on them. Now imagine your 3rd, 4th, etc. playthrough. A puzzle skip would be appreciated.

Although I don’t want to sound nitpicky, the mentioned negatives did sour my experience a little bit. The good news is, it’s the only thing that fell on a bad light. 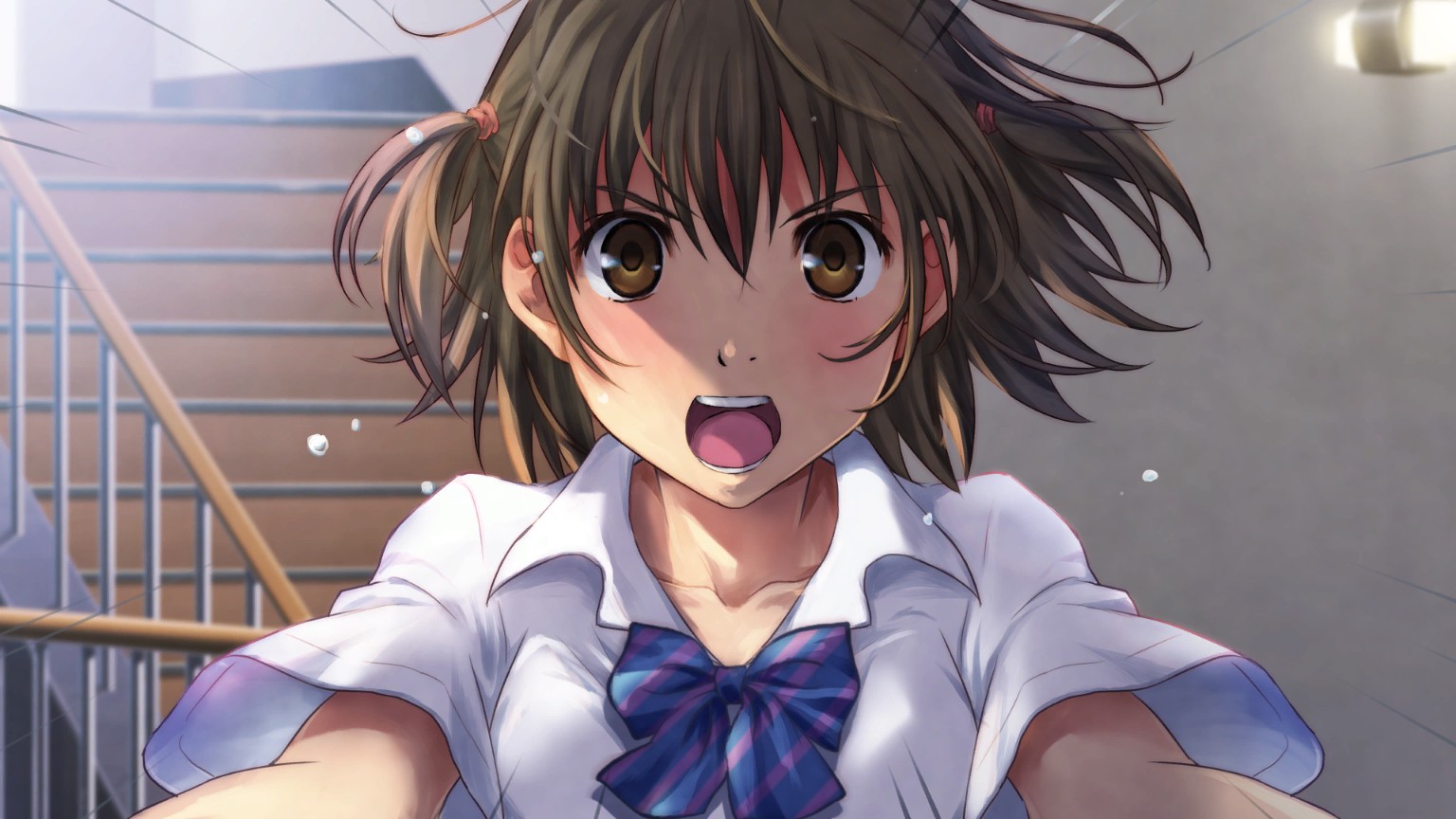 From what I can see it’s hand-drawn and the menus are specially designed to show off its individuality. There are over 10 CGs to collect in the game. As to whether it looks good or not… that’s rather a subjective thing. On a personal note, I liked what I saw.

The music does its job. Outside of the Opening song and ending theme it’s mainly BGM that accompanies the game’s story.

Kotodama: The 7 Mysteries of Fujisawa is a neat first step for PQube. Combine this with the sensible on point pricing and you get a pretty good price/performance. It nails the Story, Characters and even the Puzzle Gameplay is not overly causal.

The only thing that made it miss the mark of an Autosave are the mentioned negatives that create a slight clash in genres. Visual Novel and maybe Match 3 Puzzle Fans might want to keep an eye on it. Congratulations are in order for PQube as it is a fine first product. Hopefully, there is more to come.