More than just a VN. Gaining while playing.

What? Japan-Smart? Gaining while playing? Yes, you read that right. Tokyo School Life isn’t just a simple VN with a story to tell. Nope, it offers you a lot of information about the country and its culture straight from the source! Indeed, a bonafide Japanese developer. It wouldn’t even be surprising if you were start to feel the itch to travel there once you’re finished. It’s also an interesting read for you to train Japanese. As to what Tokyo School Life’s story is about and how they are doing it… Go on, read further.

Story: An exciting homestay because…! A crash course in Nippon.

One day, your school decided to award a travel prize for ranking first, a school exchange with a sister school in Japan! Our Hero, John Smith, (default name) or “you” came out on top from the fierce competition. You heard a lot about the (in)famous land of the rising sun from a weirdo relative who loves to travel. Studied in the art of Anime, Manga, the Japanese Language you head to the place of dreams, or so you thought…

You arrive at the airport and are ready for your first day of school, making sure to arrive in time by taking an early bus ride. Reality and expectations are sadly two different things. Who would’ve have thought of getting stuck in traffic? It’s getting late. Run for your life!

*Bump*!*. The “bump-into-girl-in-a-hurry” event is now activated. That’s how you meet the first of the three main characters: Karin Yayoi. After a little bit of a kerfuffle and misunderstanding, you manage to escape her clutches. Things look good! There’s still time. Once entering the school, you meet the petite, cheerful and bright Sakura Minatsugi in another self-aware “bumping/dodge into an overloaded girl” scenario where you spill your juice on her because you clenched your hand with a box of juice in it. Here are the juicy tidbits… or not. We wouldn’t want to spoil everything right?
Our third heroine, Aoi Hazuki, arrives in with an impact by contrast. She appears as gentle, calm and bright but also fragile because of chronic health issues. As fate dictates, you will live together with all three of them at the Tomoe Dormitory… 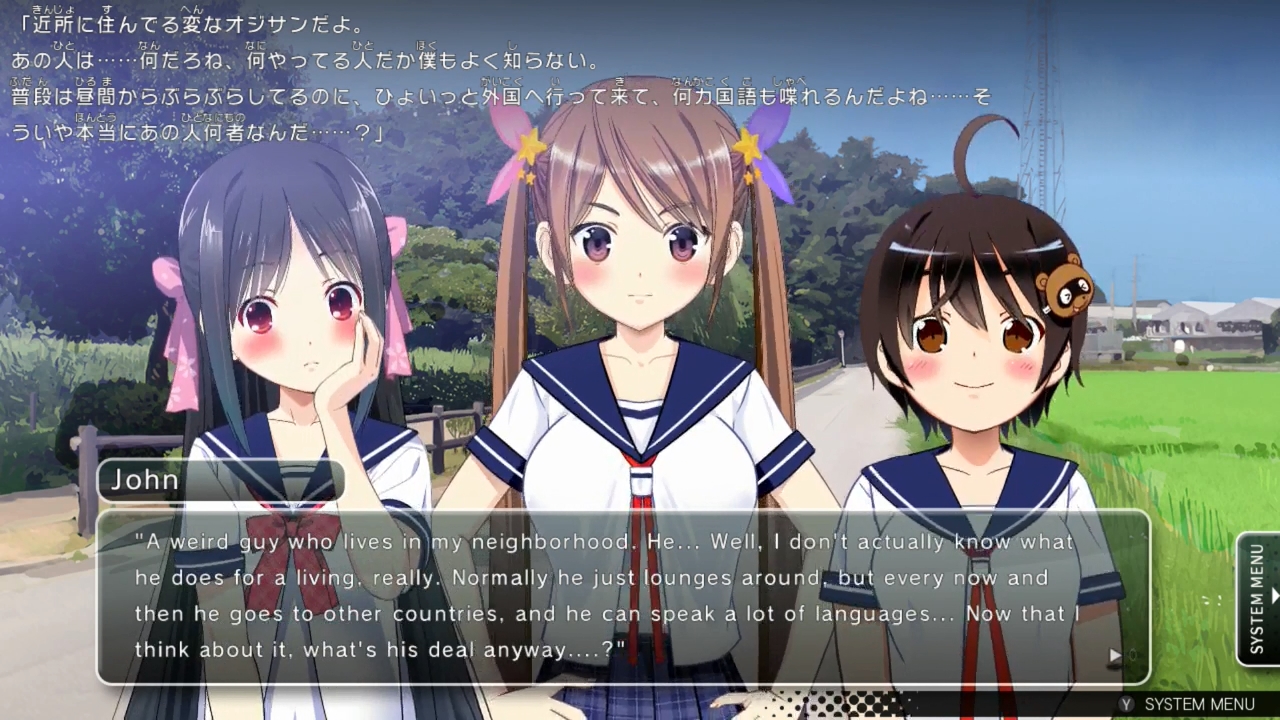 Veterans of the VN genre will recognize that the game has two phases. The first half is what you can call the Main Route. You make the decisions that unlock the three Characters Routes. The second half starts with an obvious route choice and locks you into it. That’s where the drama ramps up. 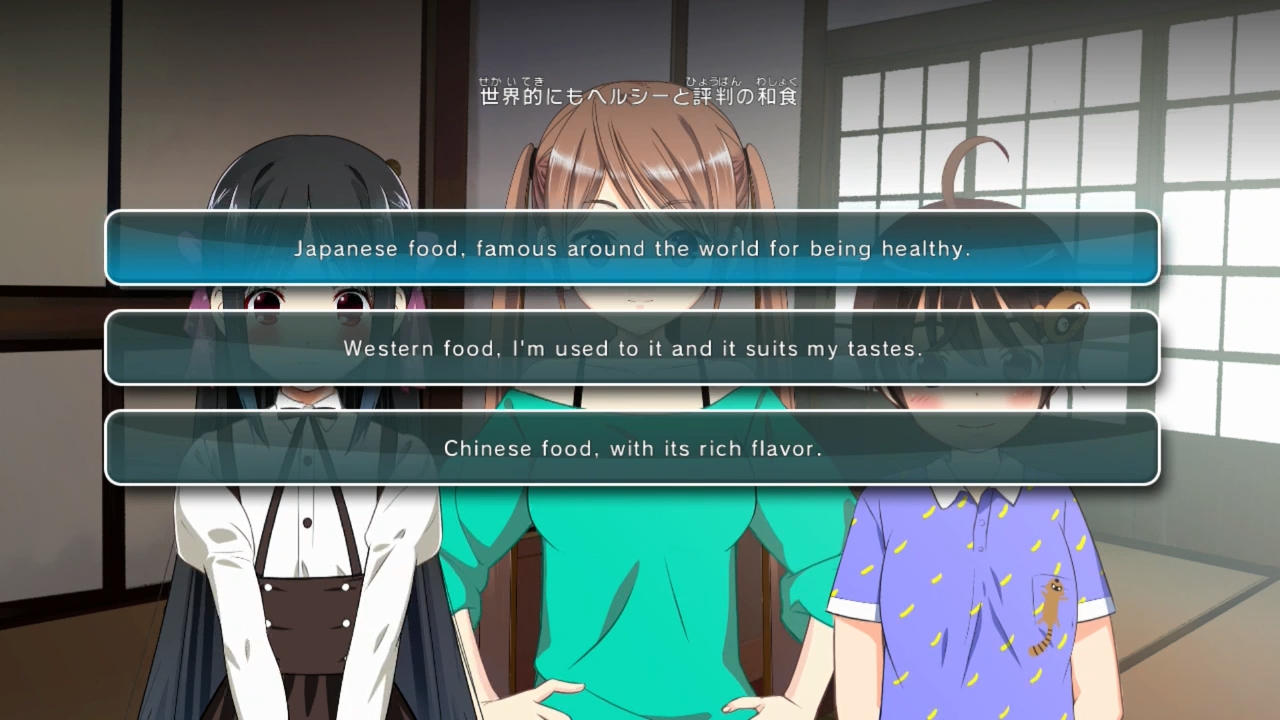 Aside from the Story. Tokyo School Life interweaves information about Japan akin to a tour guide. You will be lead to popular locations where your date gives you some sweet details. It covers a wide range of topics such as food, locations, festivities, etc. helping you paint a lively picture.
It is an interesting approach and works well as it entertains and explains things at the same time. 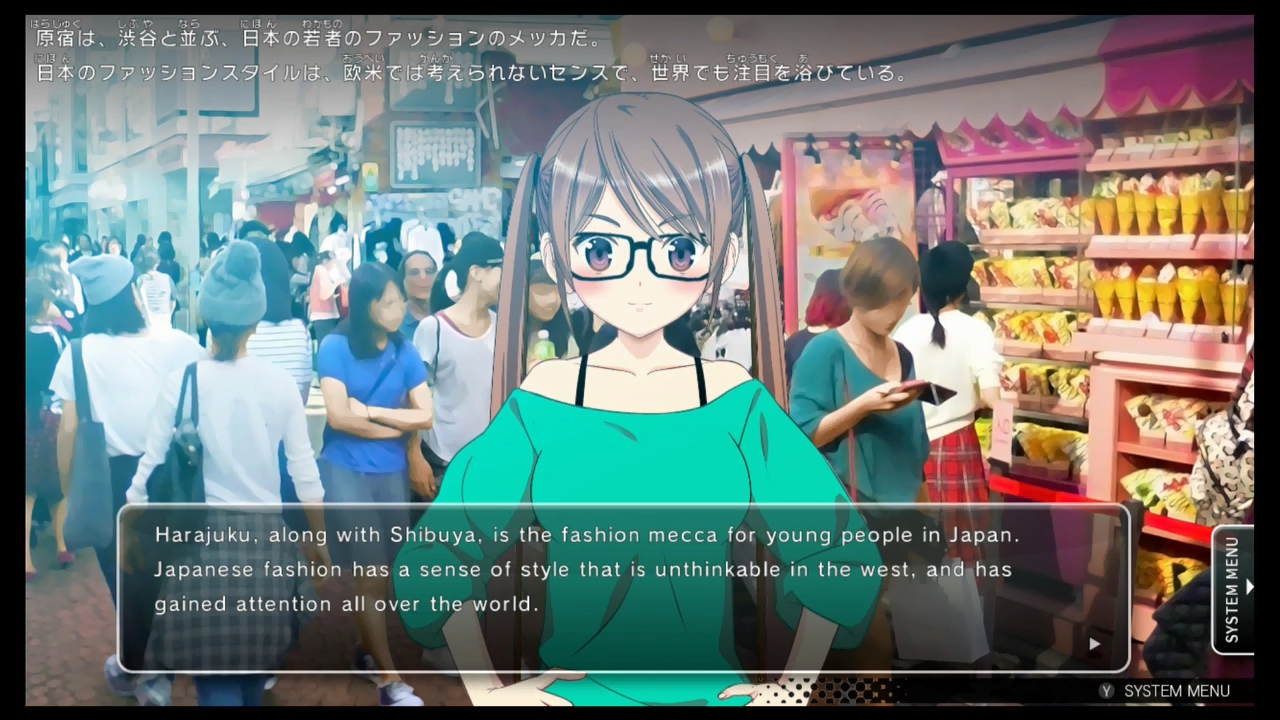 As to why it makes a good read for learning Japanese. That’s part of the gameplay and presentation.

The gameplay is pretty standard fare with you going through different routes by making decisions with one exception, there are two text displays. One is presented like in Senran Kagura Burst Re:Newal VN Story. The other one is in a textbox just like in Punch Line or other VN games. Why are there two textboxes?

It shows English and Japanese at the same time! I don’t want to burst any bubbles here. You won’t get a lot from playing it purely with zero Japanese knowledge. Basic knowledge like Hiragana and Katakana are necessary to make use of it. The good thing is all Kanji have Furigana to help you reading and learning them. Everything the three main heroines say is voiced, so you get a reference on how spoken Japanese sounds. That’s all Tokyo High School Life does though. So if you want to use it as a learning material, make sure you have a Notebook and a Dictionary ready. It’s most certainly not a from zero to language hero game but it certainly offers a unique supporting role.

Now, there is a little thing I’d like to talk about. Options. Yes, in terms of gameplay there aren’t that many differences between VNs. But there are some QoL things I see in Tokyo School Life. Here’s are the screens for the options. 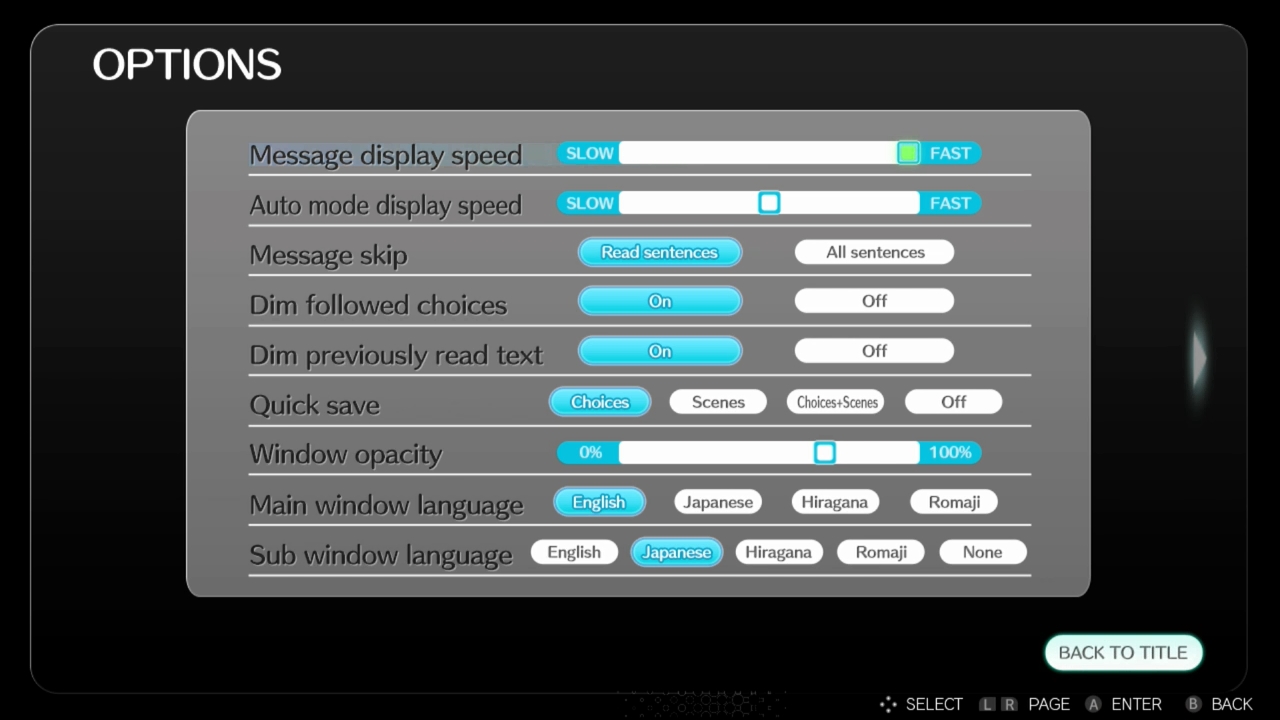 Most of it is pretty standard. Message skip, Message Speed, etc. just what you would expect. There are some special ones that I’d like to point out and some you may have noticed. For an easier time when replaying, there are options to dim out the text you have already read and another one for the choices you’ve already made. It might sound like nothing but once you experienced it, it becomes a feature you don’t want to miss.

Exclusive to Tokyo School Life there are the Text Window languages. There’s English, Japanese, Hiragana, and Romanji. If you want the standard VN experience you can even turn off the sub-window. I have no idea why Hiragana and Romanji are available as options but it’s nice to have them anyway.

Another Tokyo School Life exclusive is the ability to sync the text and voice. This helps you to match the words visually and auditory, maximizing the effect. There’s even an option to turn down the BGM so you can hear the voices better.

The graphics deviate from the VN formula by having the characters animated. You can see them doing body gestures, changing expressions, breathing, and even a little bit of moving. For people who put value in realistic physics…there are bouncy physics. There are some unique artworks, just don’t expect many. 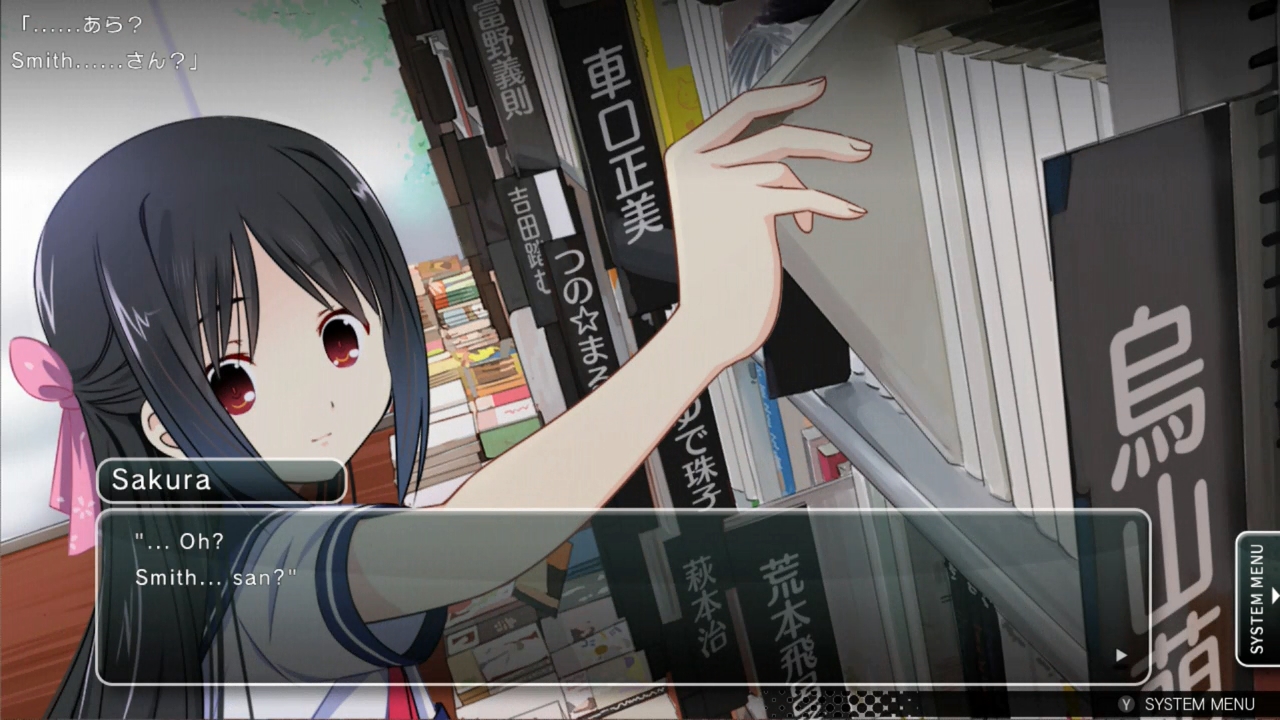 The sound is pretty good and is quite upbeat, moody or tense when it needs to be. Each of the three main heroines also has their own theme. It also gets another special mention for subtitling the main theme song. With the game featuring voice acting for all heroines, it meets the VN standard that you’d expect.

Tokyo School Life does a great job in what it sets out to do. Wising you up with Japan Facts and delivering a fun time while at it. I was expecting some easy-going entertainment with Tokyo School Life and it has done exactly that. While I could nitpick it for not giving players enough tools to learn the language itself, that would be nothing short of excessive nagging because it’s already budget priced and more of a personal nitpick. If you want an entry point for VNs, learn about Japan, something to accompany your Japanese studies, etc. then it’s for sure something you don’t want to miss. I can only warmly recommend it to everyone since there’s something to gain for everybody.