Iron Marines drops ship onto Planet PC. Do they have what it takes to survive on this high level system? read on to find out

From the creators of the award winner, Kingdom Rush trilogy comes the most extraordinary space odyssey.

A real-time, dynamic and deep strategy game that will transport you to amazing and unknown planets. Immersive, engaging gameplay, ridiculously appealing art, and a touch of silly humour. Brave soldiers, mighty mechas and powerful aliens await your command to face the greatest challenges.

Recruit and train the greatest heroes in the galaxy, lead them into dangerous missions against near-impossible odds and unleash their mighty powers and abilities. Adapt your strategy by changing the role of your troops even in the thick of the combat, from ranger to sniper, from flamethrowers to missile launchers. Turn the tide of battle with bomb strikes, intelligent mines, support troops, turrets and a wide range of special weapons.

I reviewed the original Android release of Iron Marines back in September 2017. Ironhide studios now bring their RTS(real time strategy) game to the PC via the Steam store. All the updates from the mobile release are included, plus a host of new features that are tailored for the unique requirements and expectations that this premium gaming platform warrants.

The main campaign stretches out over 21 missions. These are played out on 3 different planets. The opening skirmishes take place on Sagan-1, an alien planet full of creepy otherworldly lifeforms. Each mission plays out in a different manner. Some are basic land grabs with node camp points, which have to be conquered in order to progress. Others comprise of rescuing captured colonists and scientists. Later more involved schemes require hacking of terminals to bring down an alien supercomputer. There’s a decent mix of scenarios to keep the main campaign fresh and interesting.

Along with the main story, there are 21 Special Operations which add some side content. These are unlocked as you progress through the campaign. These can be replayed time and time again to reap coins and experience points. Each operation has its own set rules and layout. I particularly like one of the early missions which play out like a horde mode. This is great at trying out the various heroes in a simple test of their unique skills. Even if you fail the test, your character still gains experience points. So it’s a fantastic way to ramp up their abilities in a stress-free way outside of the demanding core crusade. 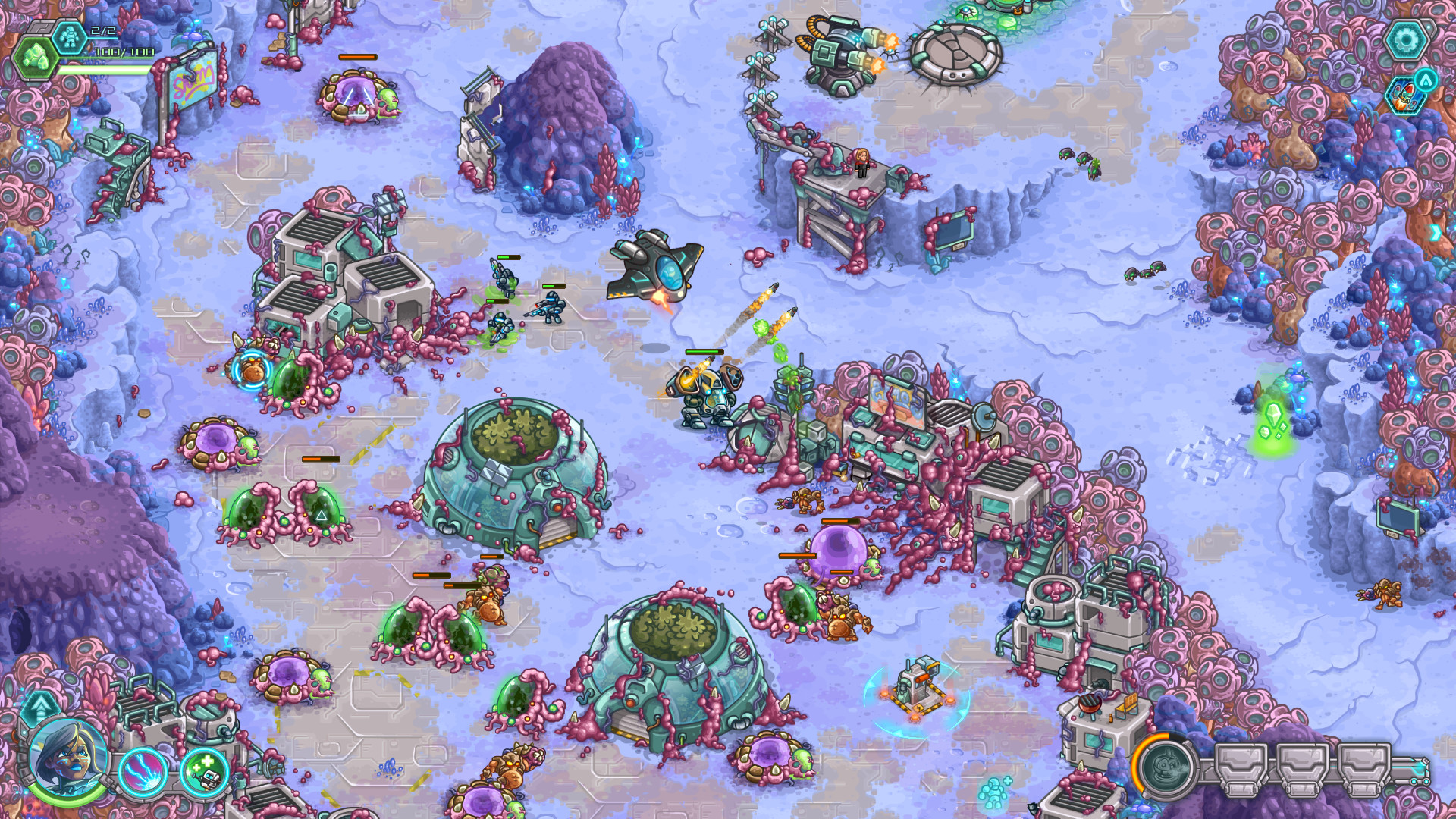 The PC release comes with the full roster of hero units. These can be unlocked by progressing through the story. Initially, you can choose from Taggins, Kara and Paragon. Taggins is a typical shouty marine, all oorah and bluster. A great starting unit with decent defence and a fearsome uranium ammo power up. Kara is a blonde version of Ellen Ripley in all but name. Encased inside her exoskeleton she packs a punch with heat-seeking missiles that can take out alien structures with ease. Paragon is an intriguing Wrath-like character. He combines melee attacks with his glowing sabre along with spirit powers which stun nearby enemies.

The base units that accompany your heroes come in three flavours. Marines, Psychics and Mechs. Marines are the usual grunts, they are split into a further three specialists; rangers, snipers and engineers. The same applies to the Psychics who include guardians, diplomats and channellers. Massive Mechs round out the roster. These are made of Flamewalker, Shellstorm and Brawlers types. Call me unoriginal but I really dig the bog standard rangers. These are highly effective units which act as a great spear point to any of your forays in the arena. Equipped with automatic machine guns they can take out both ground and airborne foes. Not as strong as the slow lumbering mechs but superb as shock troops. Later on, you can add to their powerful arsenal with grenades which are very potent against heavy armoured aliens.

As with most tactics games, every soldier class has its strengths and weaknesses. Only by playing the game will you find the right balance of the squad. The devs have a cunning knack of throwing enemy waves that will always test you battle competence. Send out a squad lacking in any kind of air support and they will be cut to ribbons. The mission variety means that you will be constantly readjusting and tweaking your party loadouts. Sometimes brute force will not cut it. I’ve found that some of the weaker (on paper) units can make a hell of a difference in some scenarios. A case in point are the Diplomats. These telepaths have no armour. They are useless as front line troops. Keeping them in the back ranks is the key to special abilities. They have a passive area of effect which is vital in later encounters. They cast a shroud of protective shields to all troops in their vicinity. This talent is crucial if you want to complete the later missions, even on the first planet, Sagan-1. 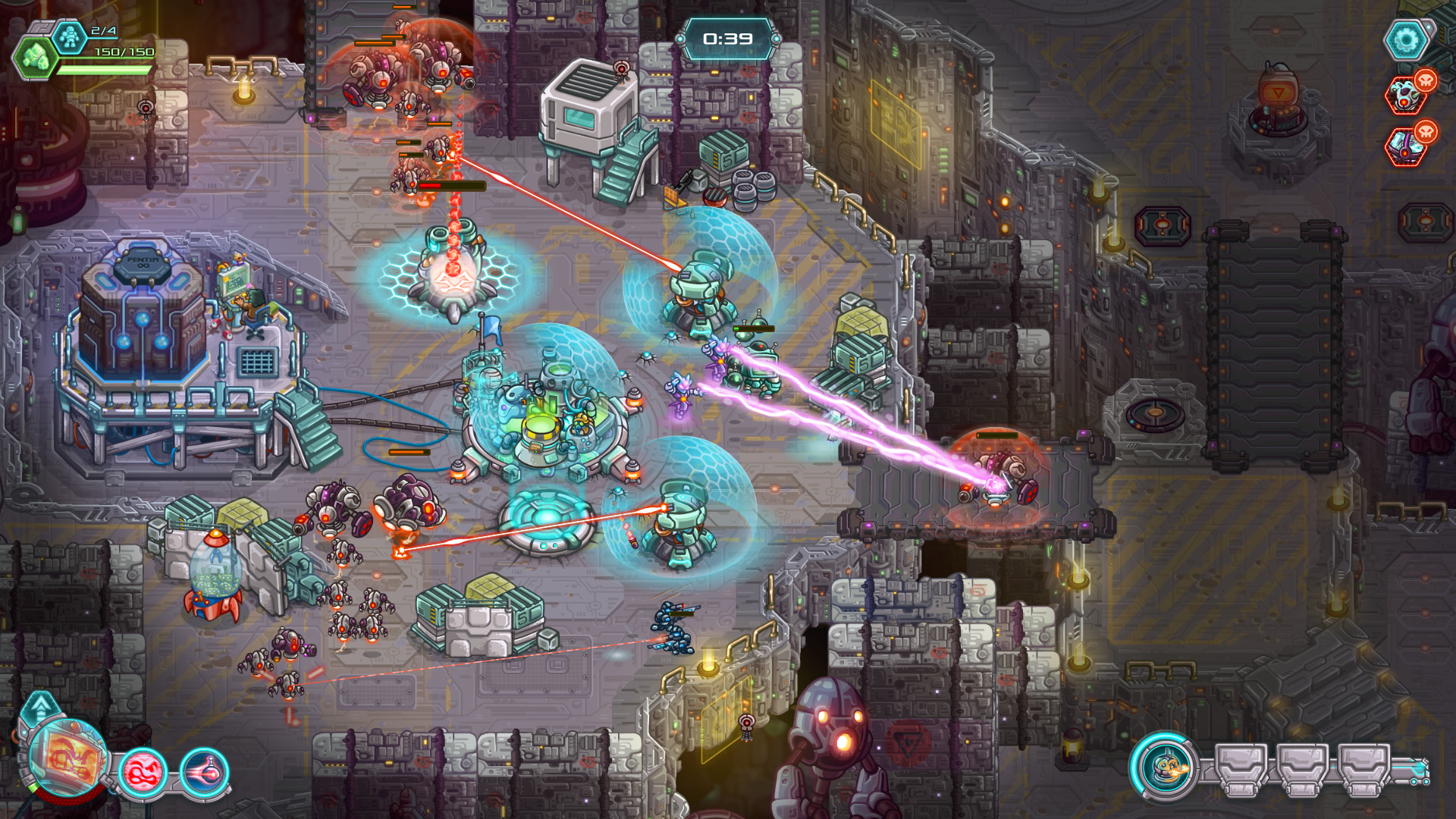 By completing missions you gain experience points. These can be spent on unlocking new abilities in the unit skill tree. These start off rather formulaic. You can put points into defensive improvement and respawn cooldowns. After the first initial fork, new powers become available. These high-level capabilities add an extra flavour to your troops initial loadouts. The shockbot patrol drone options are one of my favourite new toys to unleash on the battlefield. It is a great buffer between the alien hordes and your shellstorm combat mech.

To bolster your chances in the combat zone, you can purchase your hard-fought credits with additional support weapons and buffs. These can be equipped before you roll out into the field. Players can choose from the following inventive ordnance; replicating mines, electrocuting bollards, bouncing bombs, frostbite warheads and drop in mortar teams. All these extra military options can be the difference between success and failure on tricky missions. I have used the “bouncers” in many tight spots. They are great at softening up heavy armoured mobs and taking out pesky alien insect swarms. 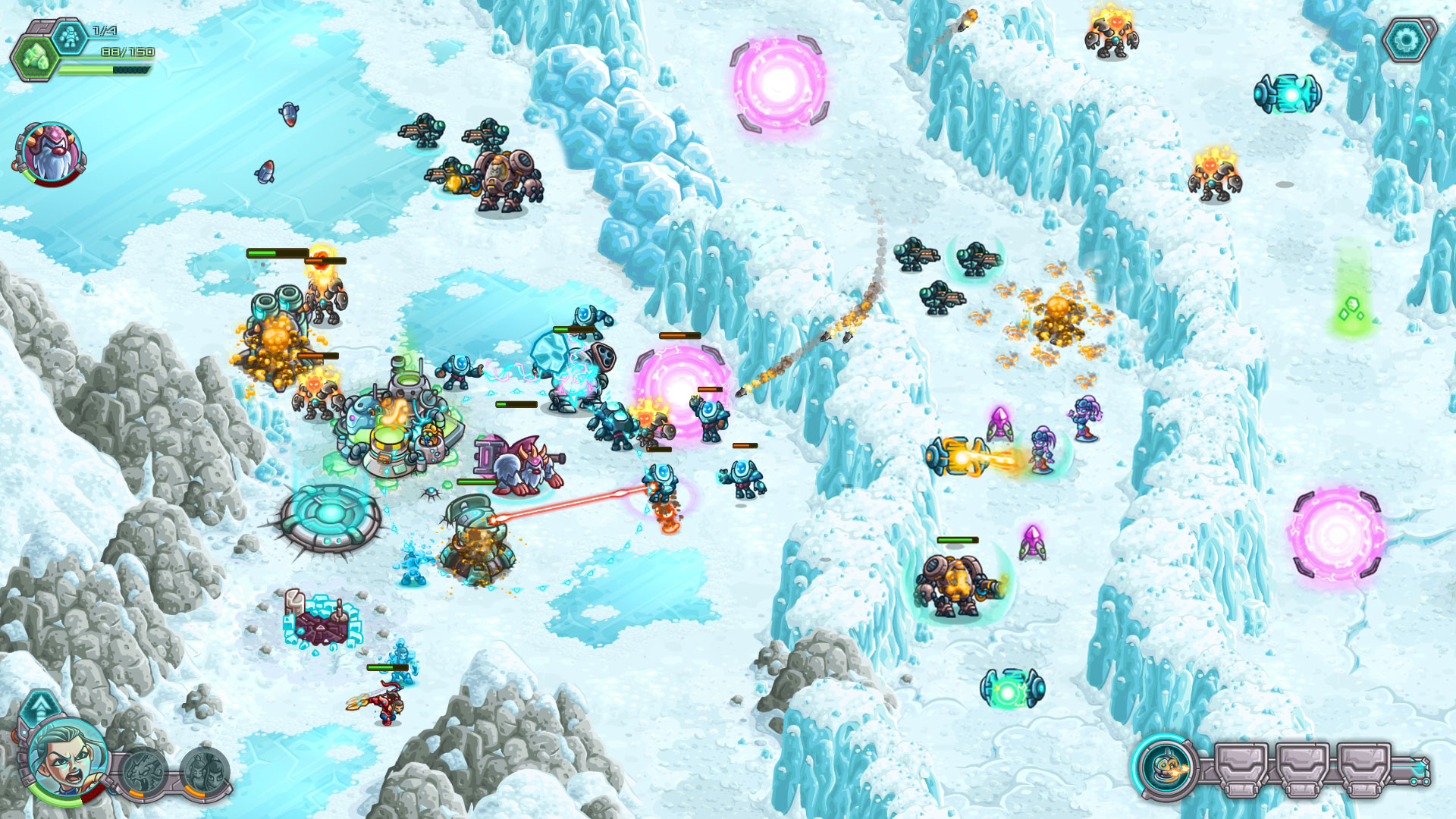 Ironhide studios signature visual style looks great on the big screen. The vibrant colourful aesthetic really pops in high definition. I’m not fond of the current trend of gritty realism that some games like to portray. I’m all for escapism, especially into a cartoon world with bags of character and charm. Iron Marines has this in spades. The little details that might get missed on the mobile incarnations of the title, can easily be enjoyed on your massive living room TV. They add whimsy and cheery nature to the whole proceedings. As usual, given the developer’s past titles, the game is chock full of modern cultural references and interactive easter eggs. Scattered around the various mission levels are tiny “star trek” figures. Clicking on them, they do the famous salute and then dematerialize in a haze of charged particles. I’ve also found a Doctor Who Tardis on one level replete with the iconic sound FX. I’m sure I have missed many other little icons and animations during my campaign run. That’s the beauty of these games, They reward replaying missions with delightful small nuggets of whimsy, hidden around the landscapes. 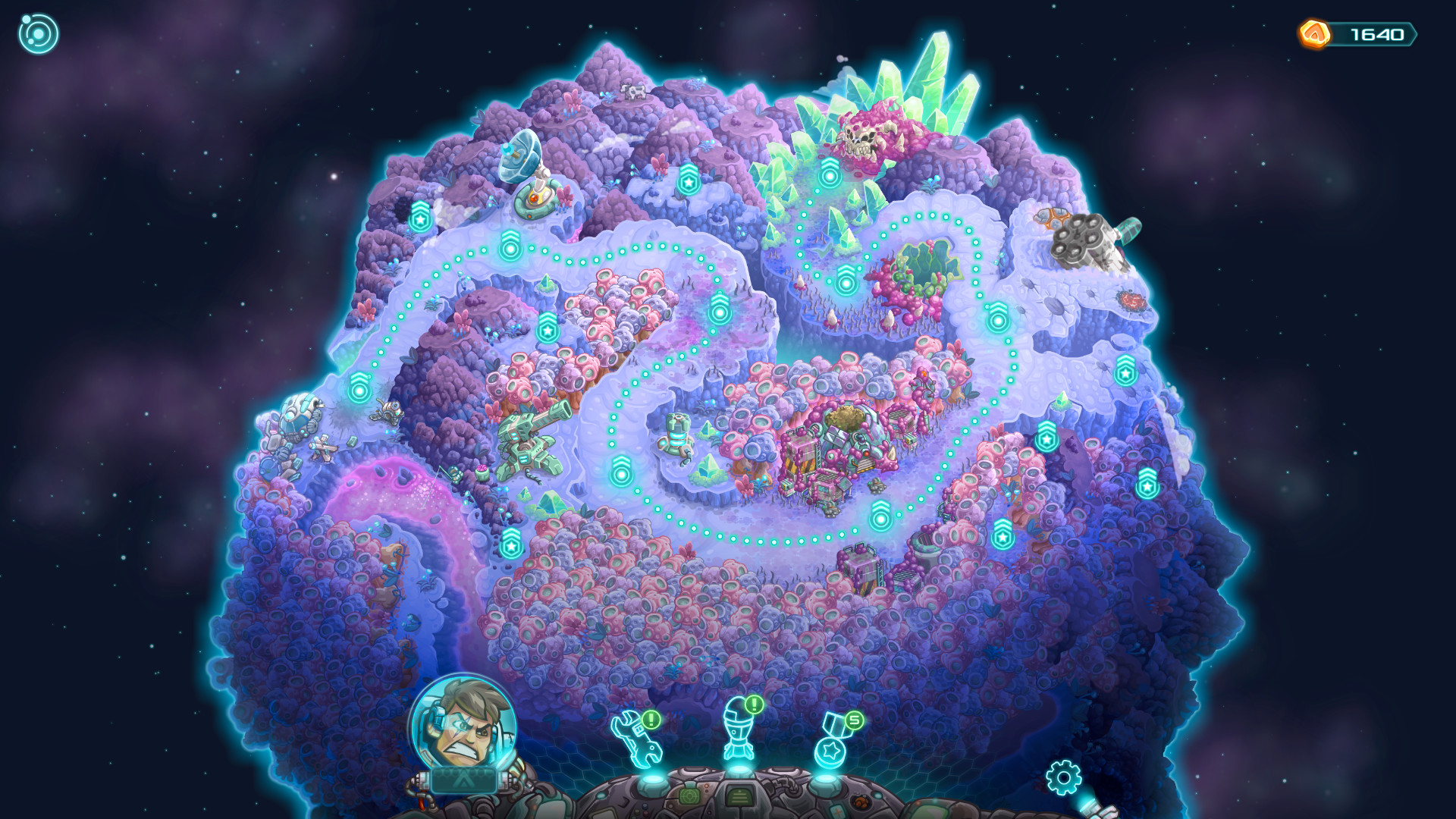 The PC port has been created using the Unity engine. This is a departure as the last couple of Ironhide releases have used the Love2d environment. This brings extra functionality but at the cost of increased load times compared to the former development system. Even on my SSD equipped gaming rig, the loading of missions is noticeable. It’s not a deal breaker, maybe 5 seconds at most, just a bit of minor annoyance. The game scales nicely from my laptop screen to 1080p on my main PC. All the keyboard hotkeys can be a rebound from the pause menu. This is a change for a Unity joint. Lazy devs sometimes omit this feature and rely on the default start pop up box.

A small pet peeve is the omission of any kind of unit / alien Wikipedia or database. All the previous Kingdom Rush titles have a handy dandy guide for all the units, enemy types and upgrades. This is not to say the units are introduced blindly to the player, as new troops are unveiled during gameplay a pop-up box is displayed giving all the information regarding strengths and weaknesses. It would be cool if these details could be browsed in a leisurely manner outside of the battlefield. Taking all these factors into account, the port is workmanlike and functional. I encountered no glitches or game stopping bugs during my review process. 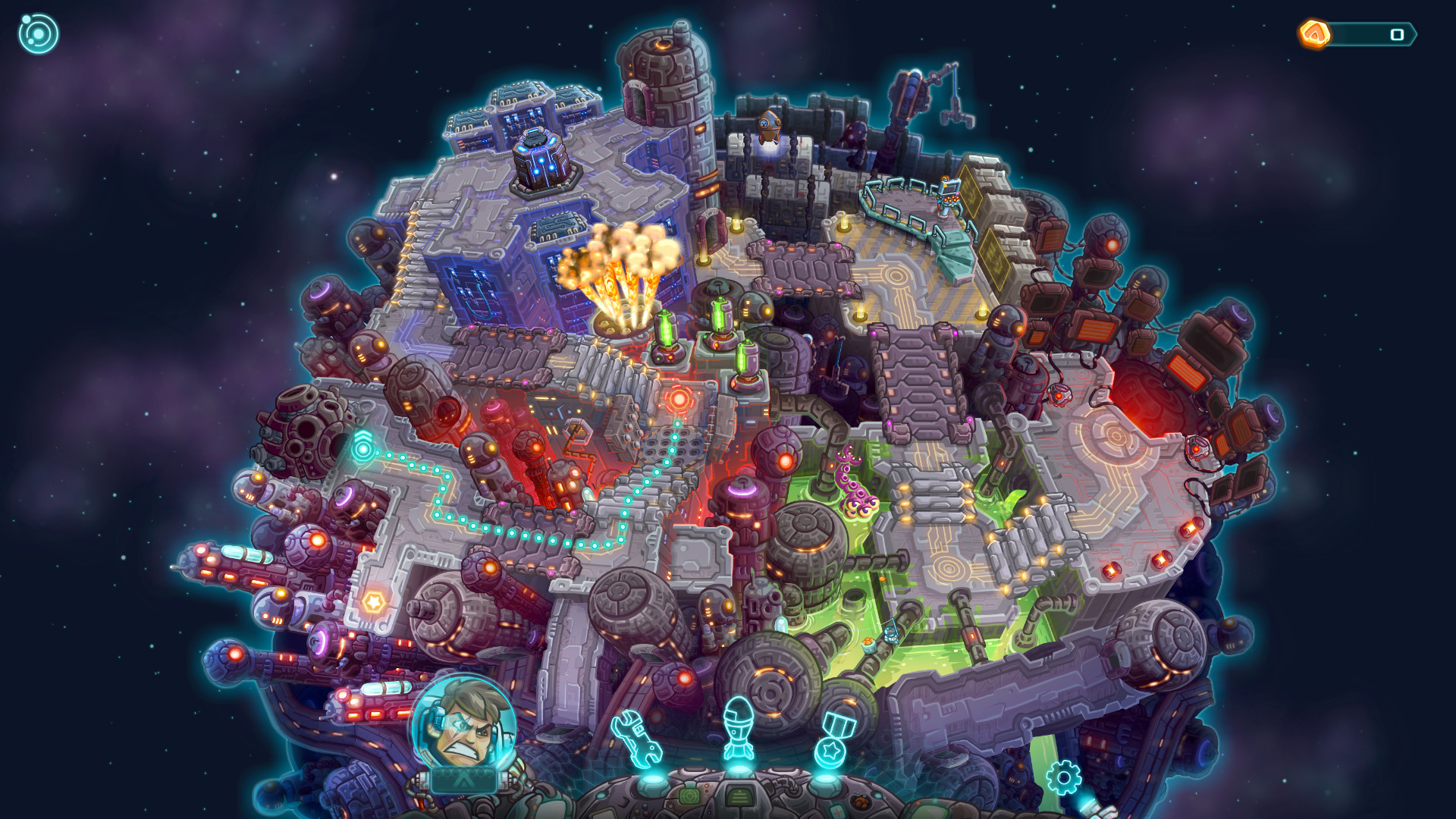 Iron Marines isn’t a traditional RTS. There are none of the features found in games such as Supreme Commander or Grey Goo. Waypoints, build queues and group hotkeys are missing. The strategy element comes from troop blends and skirmish tactics. All the usual busy work found in the old school classics has been jettisoned. To some, this might be taken as a casual experience. I’d wager that these views come from folk who have not played any of Ironhide’s previous games. They are the masters of engaging and challenging mission design. This is a tricky skill to pull off. Finding the sweet spot in terms of a difficulty curve is a rare ability. They have the canny knack of fine-tuning combat to make it both rewarding and stimulating.

On the surface, Iron Marines may look like a shallow mobile game port. This is not the case. The appealing presentation is combined with a gripping and engaging gameplay style. Beneath the cutesy graphics lies the beating heart of a tactical fiend. This title will test your aptitude as a battlefield commander. The difficulty scales exponentially, the veteran mode is a true measure of any hardcore gamers metal. For jaded real-time strategy fans looking for a different spin on the genre, I’d highly recommend Iron Marines.