Train Valley 2 is the sequel to 2015’s well-received Train Valley, by a trio of developers and published by Flazm.

The original Train Valley was a casual puzzle game in which the goal of each level was to route a certain number of trains between different coloured stations, while maintaining a positive bank balance and, optionally, meeting a number of secondary goals.

While Train Valley 2 retains the level-based approach of its parent, this sequel changes the formula significantly. Each level now requires the player to route a small fleet of trains between various stations in order to create production goods required in the target cities, blurring the line between the casual puzzle style of the original and a sort of light tycoon strategy game.

Train Valley excelled in its presentation. Graphics were crisp and colourful with plenty of life, and expanded with little animations and flourishes. Music was cool and casual, more jazz than elevator music, and a joy to listen to. Unfortunately the sequel seems to have gone backwards. 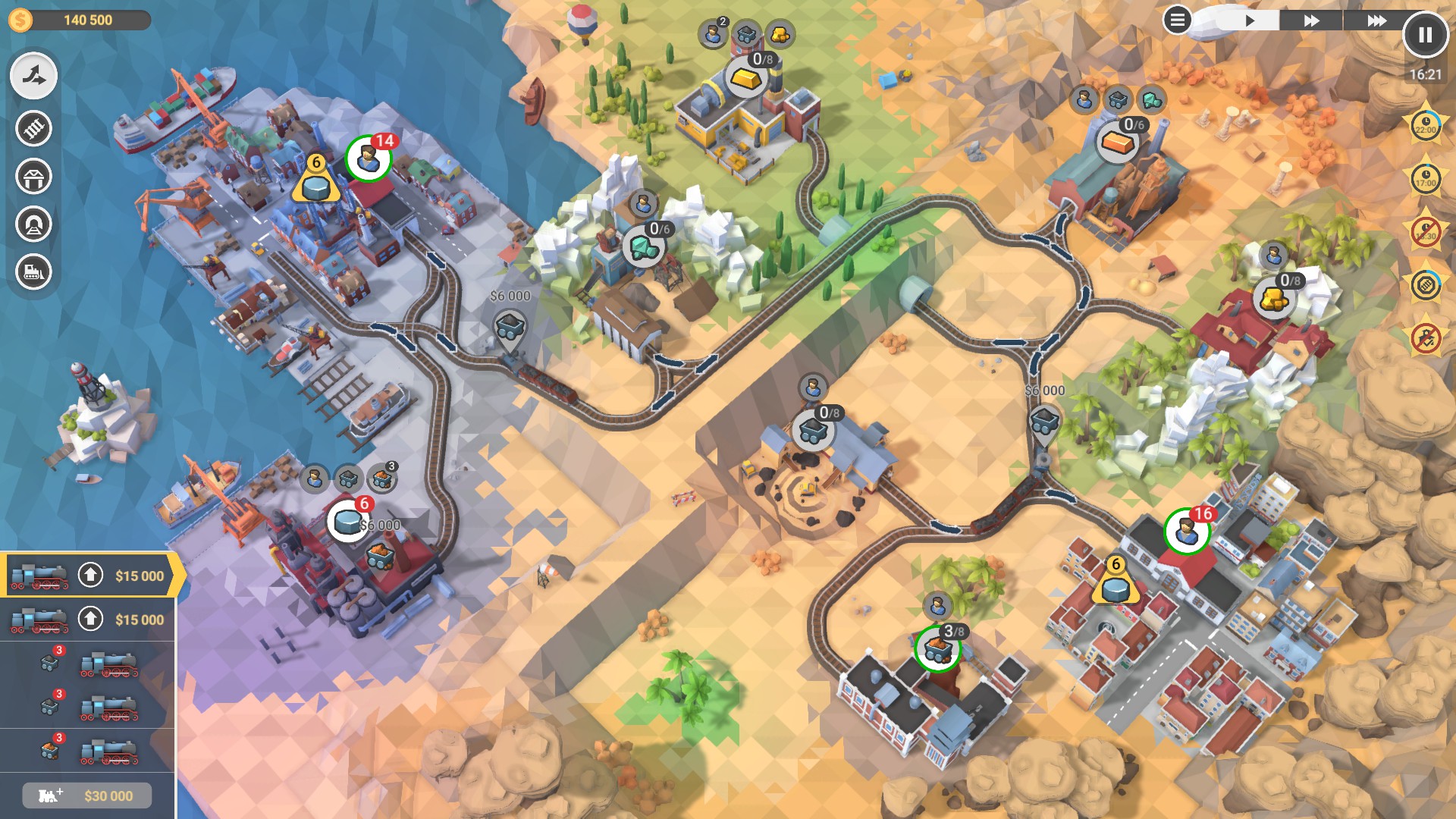 Graphics have been updated to full 3D, but the developers have taken a deliberately minimalist, low-poly approach. While they’re clean and nothing to complain about on their own, when compared with the earlier game they just seem lacking in character. Each train and production station is nicely animated and looks good, and there are some nice extra touches again like birds flying about, but it seems to lack the life of the first game; the vibrancy and personality is just … gone. It’s a bit like eating cheese made from Pasteurised milk: it works, but it’s lacking in flavour. There’s also no way to rotate the camera so it’s still possible to get signals/switches behind other objects, making them hard to use or even see. 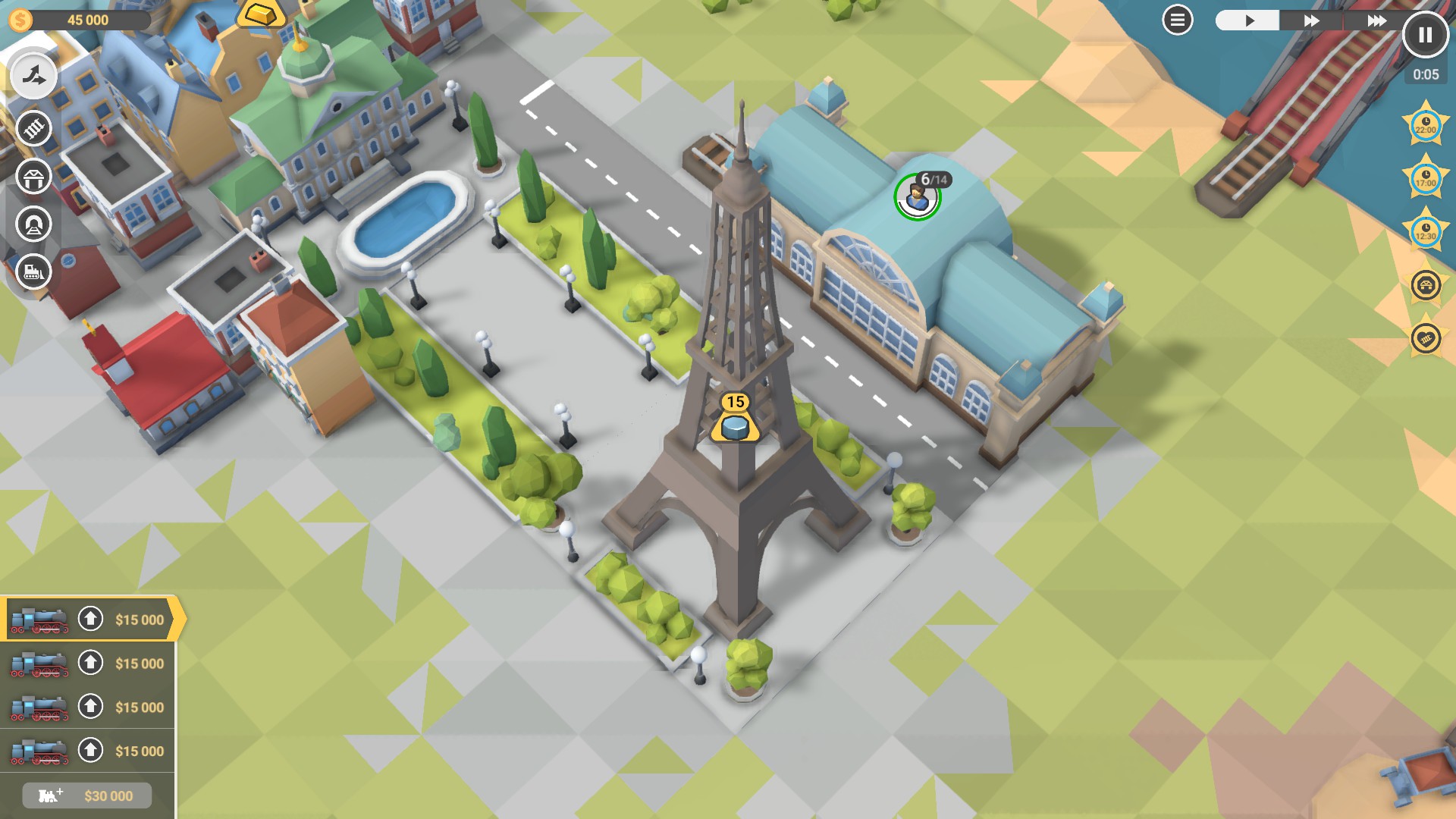 Music is well produced and nice, but it’s not as lively and enjoyable; the first game’s soundtrack seemed more varied and great to listen to, but this feels a bit like being stuck in an elevator, the endless musak playing eternally in the background. Once again, it’s not bad, just bland. Sound effects are fine. I never felt they were a highlight before and they’re not here either, but they do the job.

The interface is minimal and clean but some button clicks appear to be ignored. I encountered this in the first game, too: needing to click two or three times on the speed controls, for example, to get one to register. I don’t know if it’s a bug in the interface or maybe the hitboxes aren’t quite right, but in either case it can be a bit frustrating when things start to go wrong.

Performance is mostly good on my GTX1070-based gaming laptop, but a couple of times a level the game freezes for a second or two for no obvious reason. 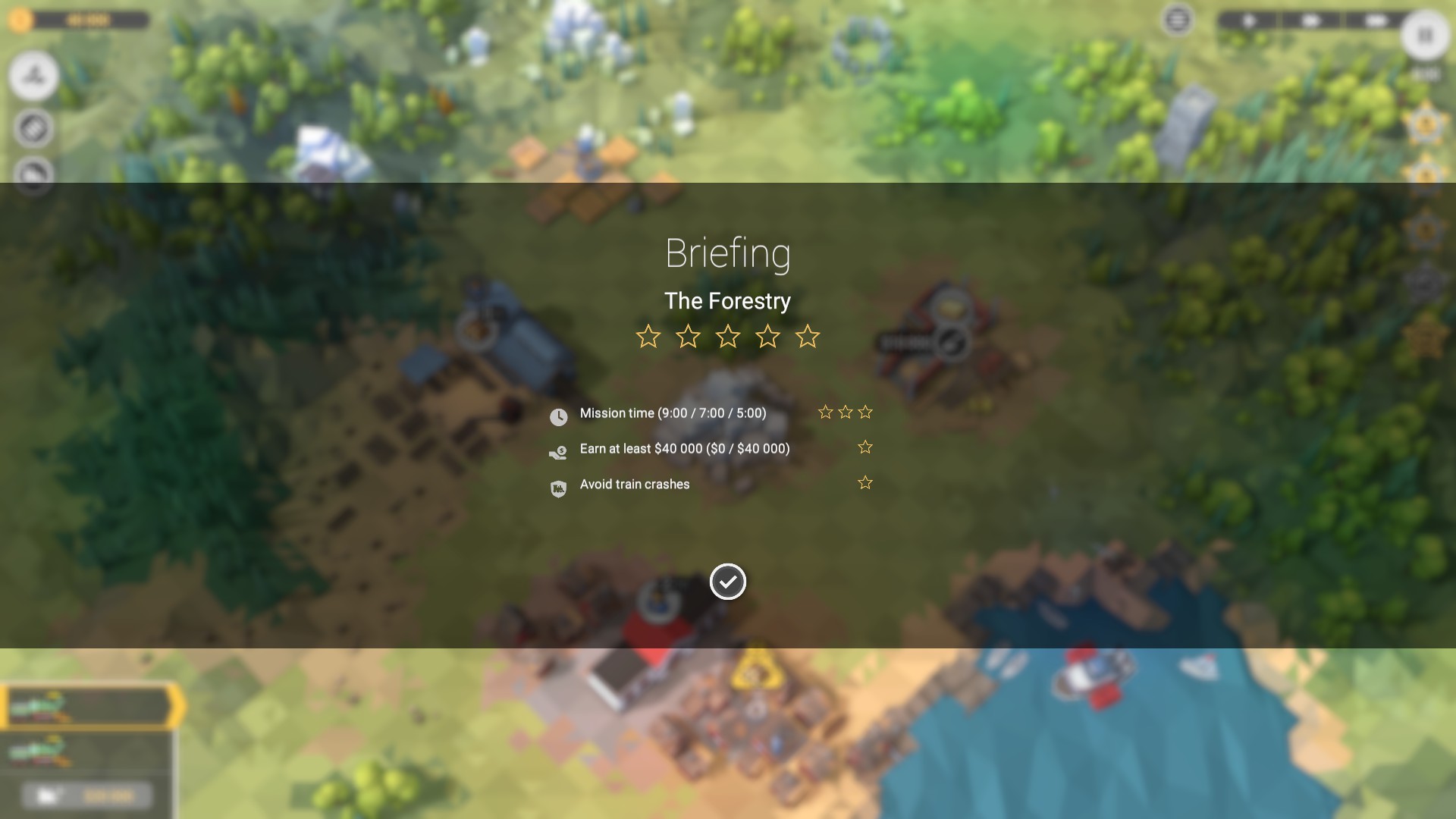 While the player’s interactions in Train Valley 2 remain basically the same as in its predecessor — build tracks between stations, click on stations to send out trains, and click on switches at track intersections to direct trains on desired paths — the core gameplay and goals have actually changed significantly.

Gone are the bankruptcy, coloured stations, extra train button, and train pressure gauge, replaced by a small train fleet, production-line manufacturing, and time limits, the last of which form three of the five stars that can now be earned for each level (the other two stars are optional goals similar to the first game). There’s also building of bridges and tunnels, which is a welcome addition, but limited in scope. 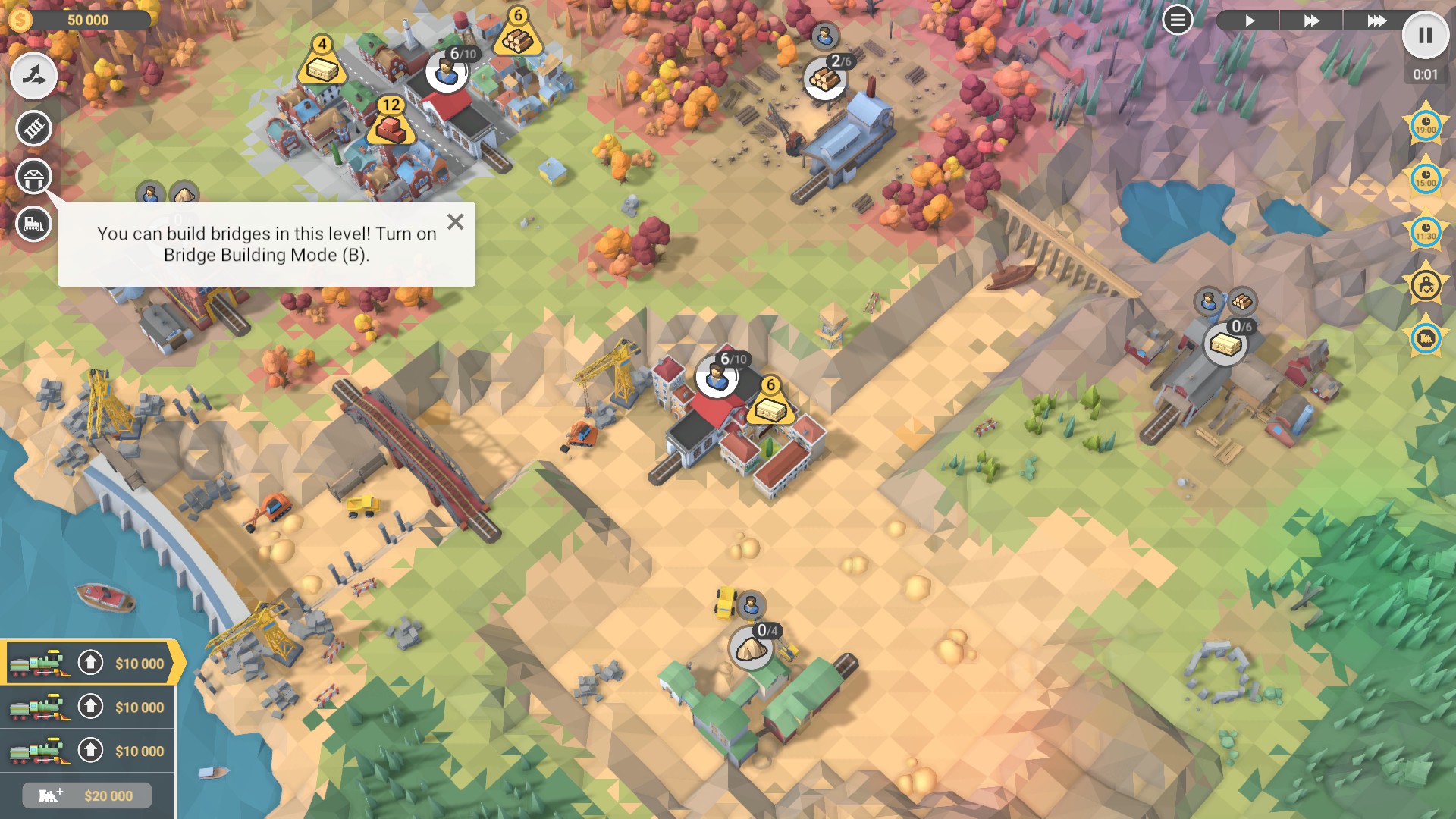 The goal of each level is to satisfy the production requirements for each city on the map. You begin with a smallish cash pool and one or more cities requiring goods: six units of furniture and five of jewellery might be required in one city, while 12 cows and 8 wooden boards might be needed in another. Placed around the rest of the map you’ll then see production stations of the various tiers, to which you need to send trains full of workers from the cities to begin production. Once you have the basics going, cash becomes much less important, and you can always send extra worker trains about to earn cash.

Higher tiers require lower-tier goods as well as workers. So producing the five units of jewellery might require gold ore and coal to make gold bars; as well as sand and coal to make glass. The gold bars and glass would then have to be transported to the jewellery factory to produce the jewellery. Each of those steps requires five workers, so all up you might need 35 workers. Some of these requirements change as you progress through the levels, but the basic idea is the same each time.

The game begins with a series of tutorial pop-ups explaining the very basics of game play. As you play more and unlock features, some of these are explained with extra pop-ups, too, but not all. For example, the questions of how you appropriate funds, why trains turn around in some stations, whether train upgrades and fleet increases carry over between levels, or whether the unlocked locomotives do anything differently are not answered anywhere. That’s not a critical failing, but since the popup functionality exists, a more complete description of these game elements would have been great. Even having played the original Train Valley very recently, it still took me a while to work out just what was going on in some of these situations.

Do well enough and you’ll unlock upgrades to your locomotives, but I think these are only aesthetic. Upgraded train fleets aren’t carried over between levels, so there’s no real feel of progression either: less a campaign than a series of discrete levels, much like the first game, but with the feeling there should be more. 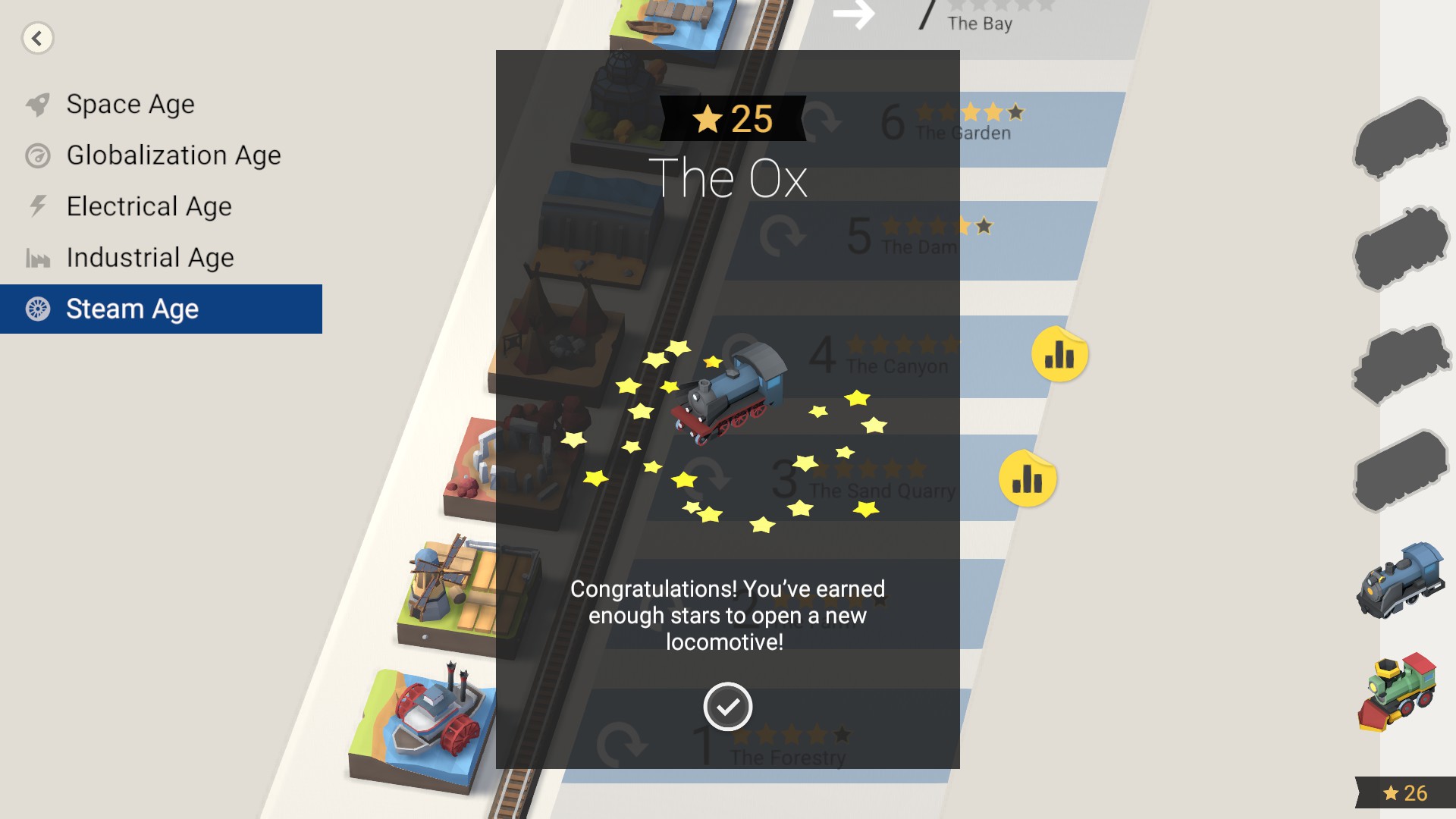 The conversion of workers into components at each station seems exceptionally silly to me. Why does a train full of workers turn into coal, wood, or grain? What happens to the workers? Do they quit, or is workplace safety so lacking that they end up in the goods?
Is my jewellery made of compressed worker? Are the cows actually eating the workers!? And why do produced resources need to be transported, but the trains themselves can be anywhere at the click of a button?

Also silly, but a holdover from the previous game, is the way in which trains can stop on tracks and turn on the spot. I would have liked to have seen this removed from the sequel.

All of these things reduce the appeal as a tycoon game. It seems to me like more than the casual puzzle game of its predecessor, but not quite enough to be an enjoyable simulation game; it’s a sort of “tycoon-lite”. Add the time constraints and the 50 levels that, at least from the half or so that I’ve seen, all feel basically the same, and it seems like a game that doesn’t quite know what it wants to be.

The original Train Valley was fun. The level times suited the amount of free time I typically have for gaming and the gradual build up of difficulty worked well. The great music and little graphical touches were the icing on the cake; it looked and sounded great.

Train Valley 2 feels like a step sideways, if not backwards. I’m only about half way through it and it feels like a chore. Though the production-line style is quite well done, each level feels the same as the last. The time-limits are also a definite turn-off for me. And it seems easier than its predecessor — I haven’t lost a level yet, since there’s no bankruptcy — while also being much longer-winded. The graphics and music aren’t as personable as the earlier game’s, either, making the experience even less engaging.

It’s not a bad game and I can see why others might enjoy it more than its predecessor, but I just don’t find it as fun to play.