Beacon is one of the most satisfying top-down shooters to look at, and even though it doesn’t necessarily bring much new to the table, it is still a competent and fun game.

It feels like it was just yesterday that I first watched the reveal trailer for Beacon, but, in fact, almost threee years have passed since then. However, as time went on, Beacon eventually faded away from my memory, only resurfaced recently, when news of its impending Steam Early Access release started to surface.

Beacon is, for better and for worse, not one of a kind. It’s a top-down shooter with a strong emphasis on character loadout customization and persistent progression. This is something which has already been done before, in one way or another, and from what I’ve read and seen so far, a lot of people seem to share these concerns regarding Beacon, the idea that it doesn’t really bring anything new to the table. While I agree with this notion, I’d argue that if a game is just as enjoyable as others that have come before it, and if it brings a unique setting that manages to captivate the player’s attention, then that game should be worth your time and money, at least in theory. 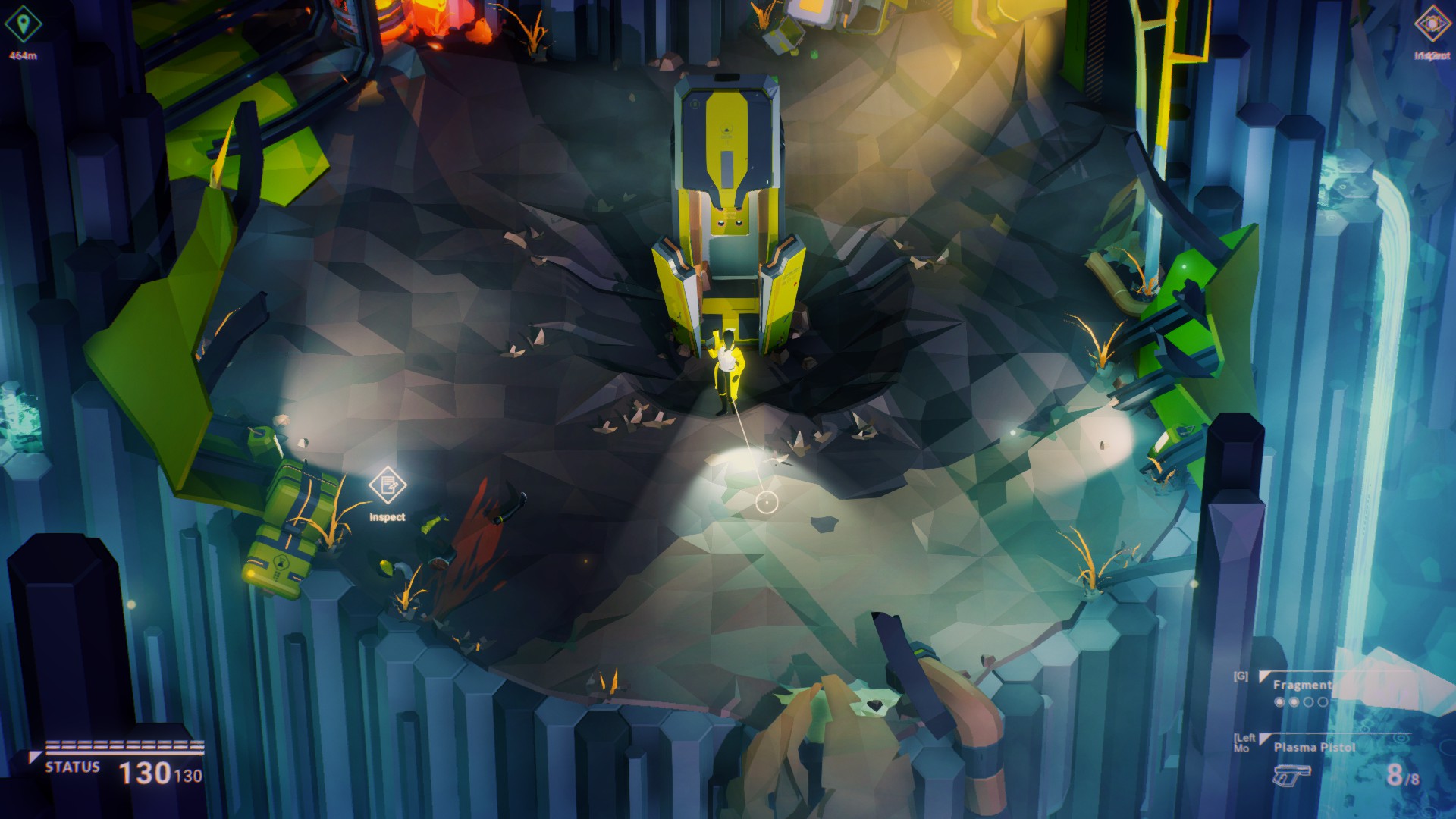 The game puts you on the shoes of Freja Akiyama, someone whose ship has crash landed on an alien plane, and who is now trying to get her hands on her ship’s distress beacon in order to get rescued. However, Freja has seemingly died many times, and you’ll also die numerous times (I’m assuming). Whenever you die, you get to customize your own DNA genome with the DNA of enemies that you’ve killed during your previous run. This essentially means that you’re altering your own clone in order to increase its chances of survival.

During your adventure, you’ll find text logs where a past version of yourself recounts the events that led up to that moment, which sets the tone and lays the groundwork for some indirect and environmental storytelling. With that said, one kind of starts to wonder how long you’ve been stuck on this planet, since you have no memory of what your previous clones have gone through. There is certainly a bit of mystery going on on Beacon, and I’m curious to see where and when things will start to unravel regarding the centerpiece of the plot. As of right now, the vast majority of the worldbuilding in the game is either visual or comes from the numerous codex entries that you acquire every time you pick up a new item, as these not only describe the item’s functions, but also provide some background information in regards to their origins. 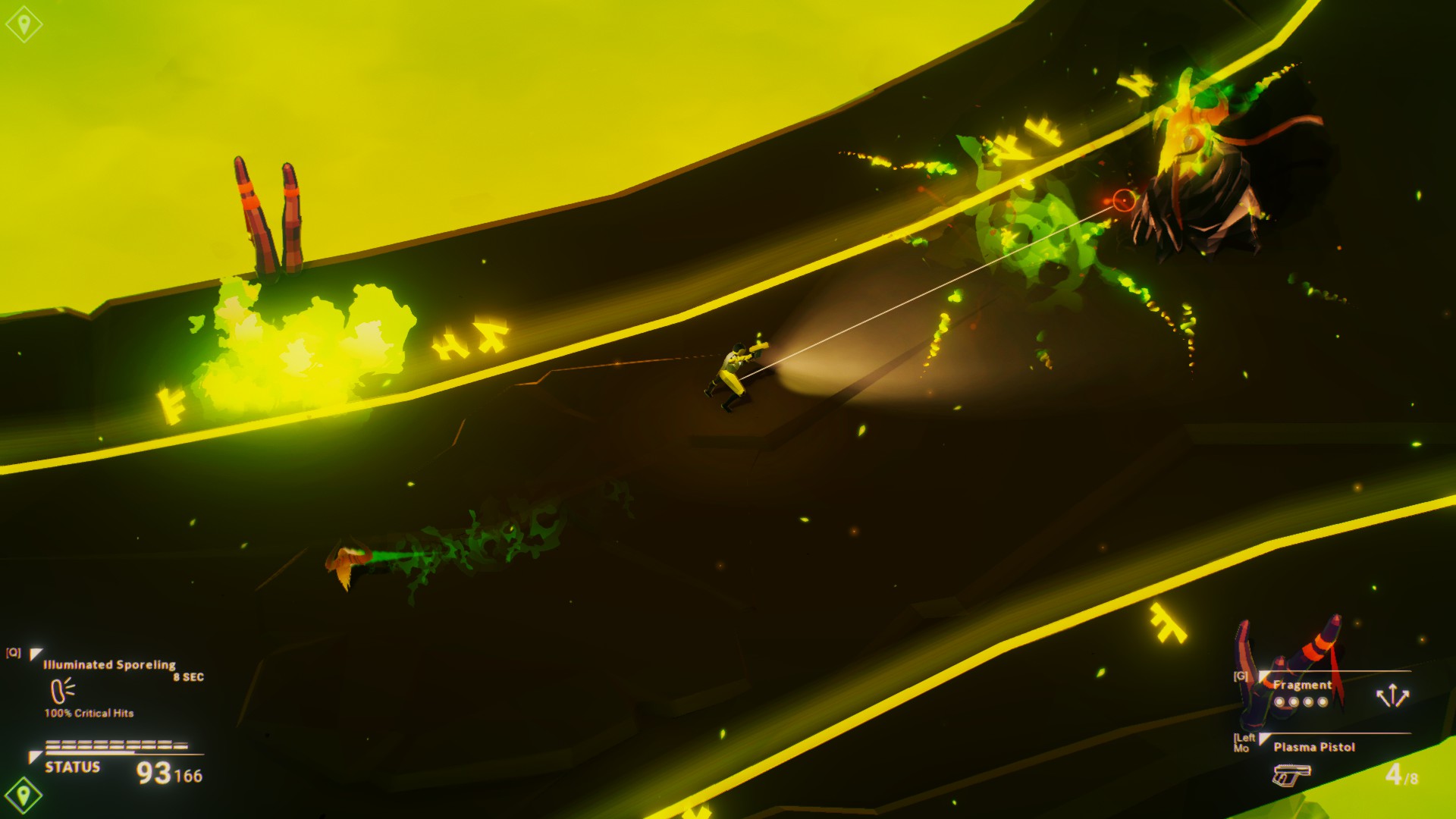 In terms of gameplay, Beacon is a pretty straightforward top-down shooter, with really basic shooting and dodging mechanics. For the most part, you can always carry two weapons with you, some kind of grenade device, and a single use booster/drone. Weapons range from simple pistols and revolvers, to a sonic gatling gun, to a pyro SMG. There are also a few elemental effects that affect both you and the enemy, such as acid, fire, and shock. Other than that, gunplay is as simple as it gets, with weapons having unlimited ammunition (but still requiring you to reload), with the only thing that keeps it from being monotonous being the weapon variety in and of itself.

One of the biggest appeals of Beacon is, in fact, its permanent progression system. As you play the game, enemies will drop pieces of DNA, which, when you die, you can choose if you want to incorporate them into your own DNA sequence. Each DNA piece grants you specific stats buffs, but it can also come along with some debuffs. However, you’re not forced to stuff every sequence into your DNA, and even if you wanted you couldn’t as there’s a maximum of 5 slots, but the game actually compensates you for the DNA that ends up being thrown away. After compiling your DNA sequence, the genomes that you didn’t use are automatically converted into experience that unlocks new items for you to find in future playthroughs, thus increasing the game’s replayability.

Also worth noting, is the fact that, over time, your DNA can mutate, which adds a temporary effect for a few lives, until it eventually goes away. These can be both positive and negative effects, like being restricted to one-handed weapons or gaining more speed as you lose health. Nonetheless, some enemies can drop mods that let you remove these undesired mutations, which helps in mitigating whatever negative mutation that you might find yourself stuck with. 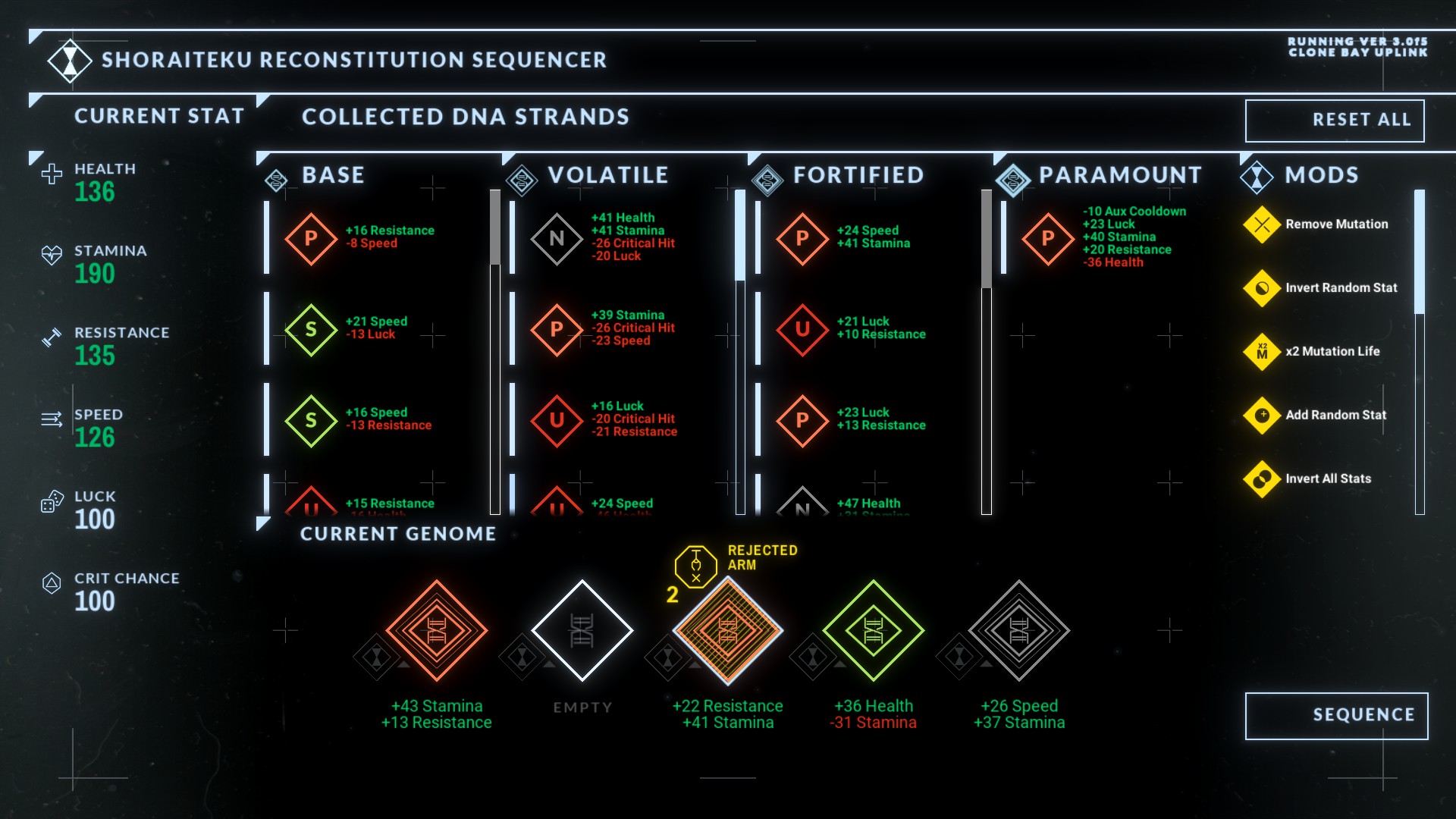 If there’s one thing that really captivated my interest in Beacon when I first saw it, it was without a shadow of a doubt the game’s graphics and soundtrack. The game sounds and looks fantastic, and it features a rather nice color palette, favoring the predominance of yellows and oranges. Along with this stylized design, the game’s varied environments, which include military fortifications, a jungle area infested by alien bugs, and even a prison housing various species, create some interesting level design which is coupled with some platforming sections.

It’s worth pointing out that levels are actually randomly generated, but from my experience, they feel pretty fluid, thanks to the way that different sections are connected. Essentially, levels are divided into different “platforms”, or areas of the map which are located at a certain elevation, and in order to transition from one to another, you either have to drop down ledges or be propelled by geysers or plants that swallow you and spit you out towards the air. It creates a rather unique flow, but also one that you must be careful with, as you can easily fall off the map and lose a portion of your health. On top of that, some levels also have secret areas, collapsing bits of the floor, and random events, like storms that obscure your peripheral vision, which just add something little extra to the whole experience. 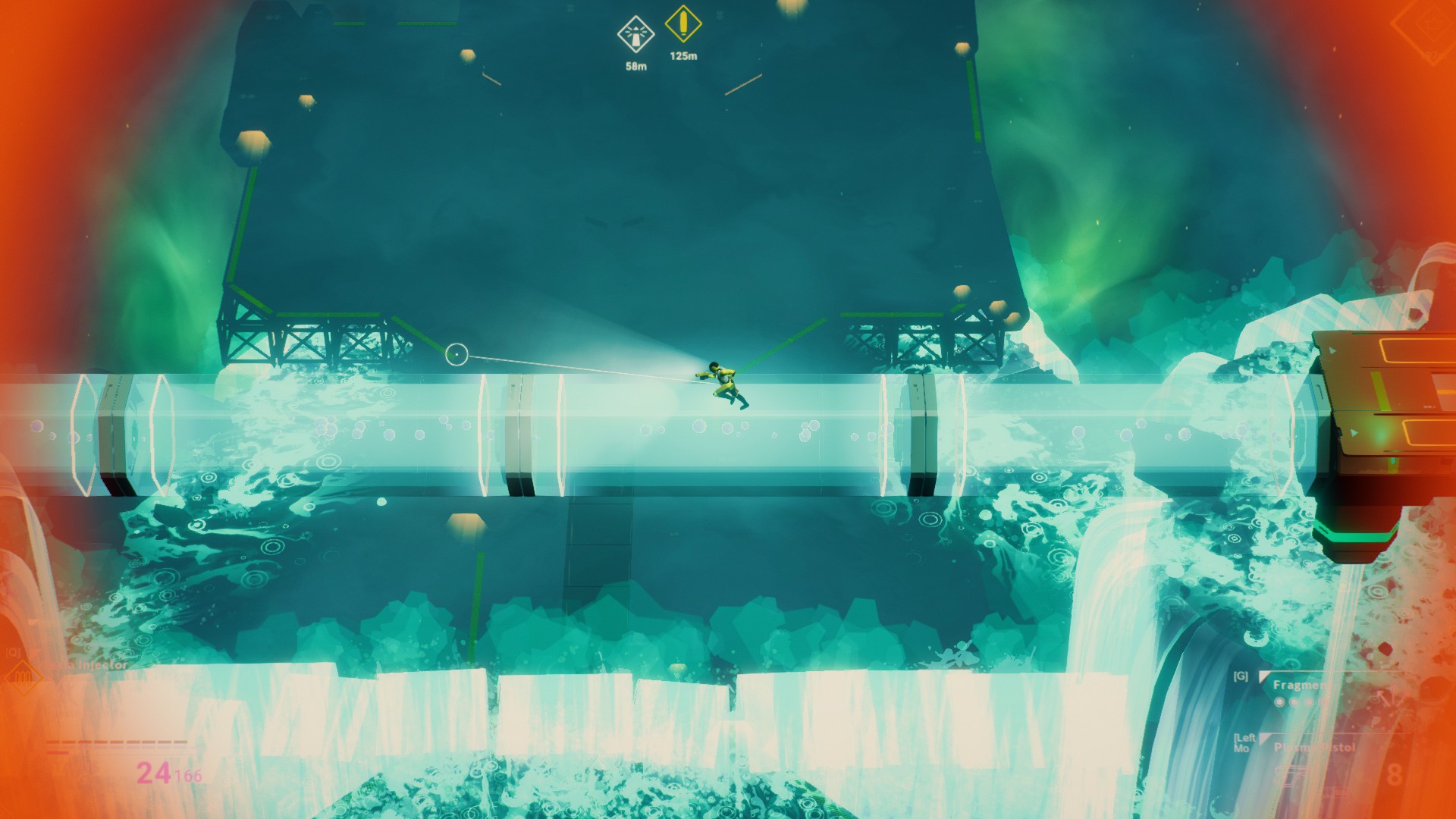 Now, while I’ve been enjoying Beacon quite a lot, the game still has its problems, and some of them were actually pretty frustrating to deal with at first. During my first few hours, I was still unsure if I should be playing this with a controller or mouse and keyboard, but eventually, I ended up settling with mouse and keyboard, mainly due to being more precise in terms of shooting. Another issue that I ran into while playing Beacon, and even though it was not present throughout my entire time with the game it still is quite bothersome, is associated with the game’s camera angle, which in a few occasions completely hides enemies behind cover and makes it hard to navigate narrow passageways.

As far as technical issues go, I have to say that the game is quite the resource hog. It brings my system to its knees, and I can barely get above 60 frames per second consistently, even if I lower the graphics settings. I’m pretty sure there is still work to be done as far as optimization goes, as the game runs a lot worse for me, than other much more demanding games do. And finally, sometimes, myself and a few others seem to run into some issues when trying to load the game, as the game will just get stuck on the loading screen, thus forcing me to close the game by force and hoping that it would just work the next time I run it. 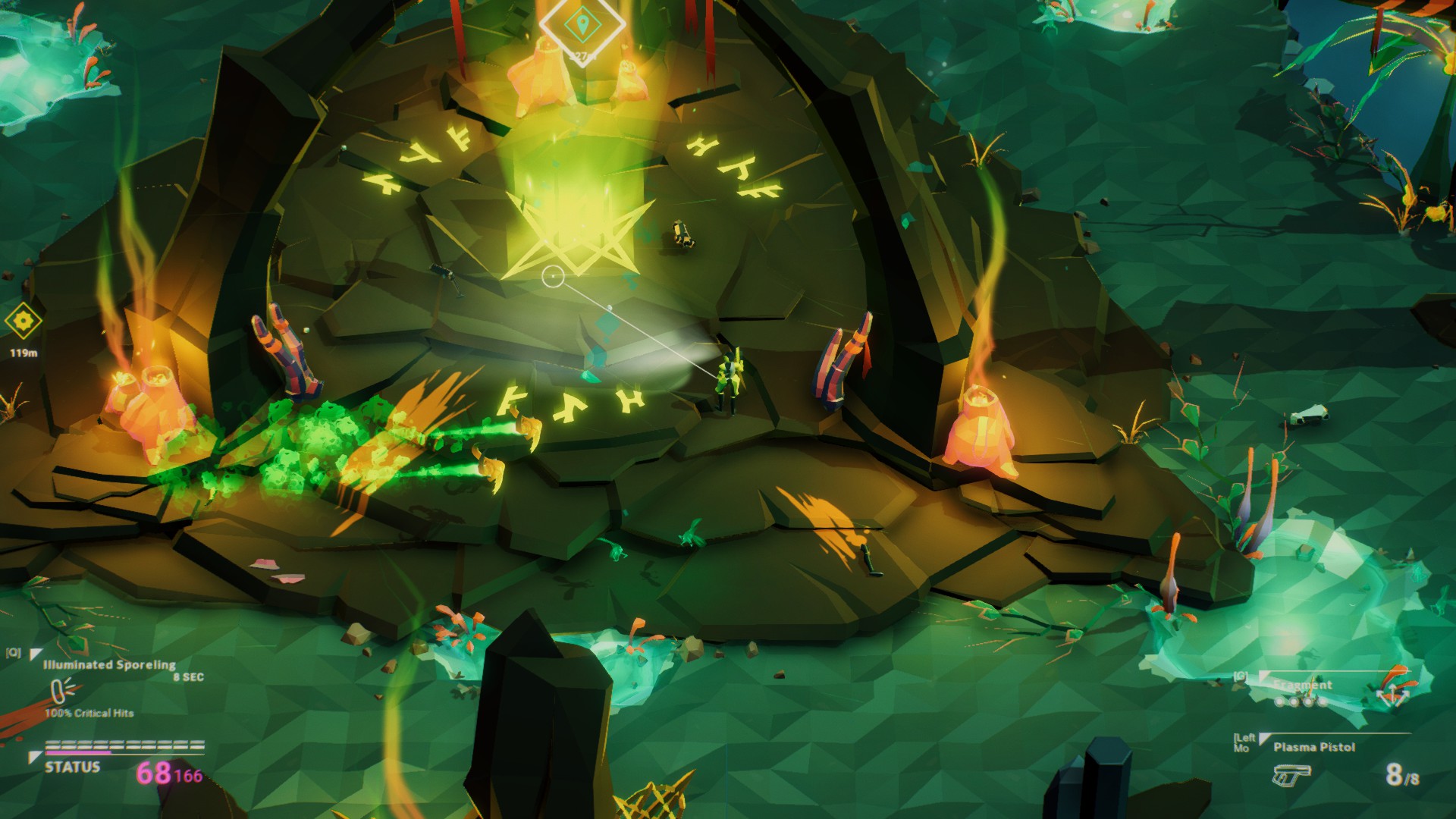 Beacon’s current Early Access version includes 5 levels of Act 1, 3 boss fights, multiple enemies from three different factions, and more items, weapons, DNAs, and mutations that I can count. Overall, I’ve really enjoyed what Beacon currently has to offer, and I’m eager to get my hands on the next levels as they get released. Initially, it might take a while before you get used to the controls, but if you can withstand its technical hurdles, once you get the hang of how the game plays, the sci-fi setting, the environments, the weapon and item variety, everything just comes together and makes this a really enjoying top-down shooter.