Return to the beginning of SENRAN KAGURA in beautiful, smooth, soft, and very bouncy 3D. Now available on Steam for PC!

SENRAN KAGURA Burst Re:Newal (Burst Re:Newal for short) is the latest release from Tamsoft, published by the gods of anime goodness, Marvelous and XSEED. It’s a “renewal” of the first SK game, available on PC after many years. Woot!

Burst Re:Newal introduces us to the “buxom shinobi” of SK in the best possible way: through slick and frantic combat, silly stories, and, of course, more jiggle than you can shake a boo- I mean, stick at! The game tells the story of the five elite students of good shinobi school, Hanzo Academy, and their first encounter with the five elite shinobi students of bad shinobi school, Hebijo Clandestine Girls’ Academy.

No one can fault the SK games for presentation; they have AAA production values and near-perfect execution. Menus are attractive, consistent, and easy to navigate. The UI is straightforward and clear. There are no glaring omissions or grammatical goofs, and everything just works.

Character graphics are the visual focus of any SK game and Burst Re:Newal doesn’t disappoint. Each girl is beautifully modelled and animated. I don’t know how much work was done updating the characters for PC, but they look better than in Bon Appetit and even Peach Beach Splash. There are some occasional minor clipping issues, but they don’t really detract from the game. And oh, the jiggle! You have to see a shinobi transformation in all its sexy, over-the-top glory to truly appreciate it. It brought tears to my eyes! 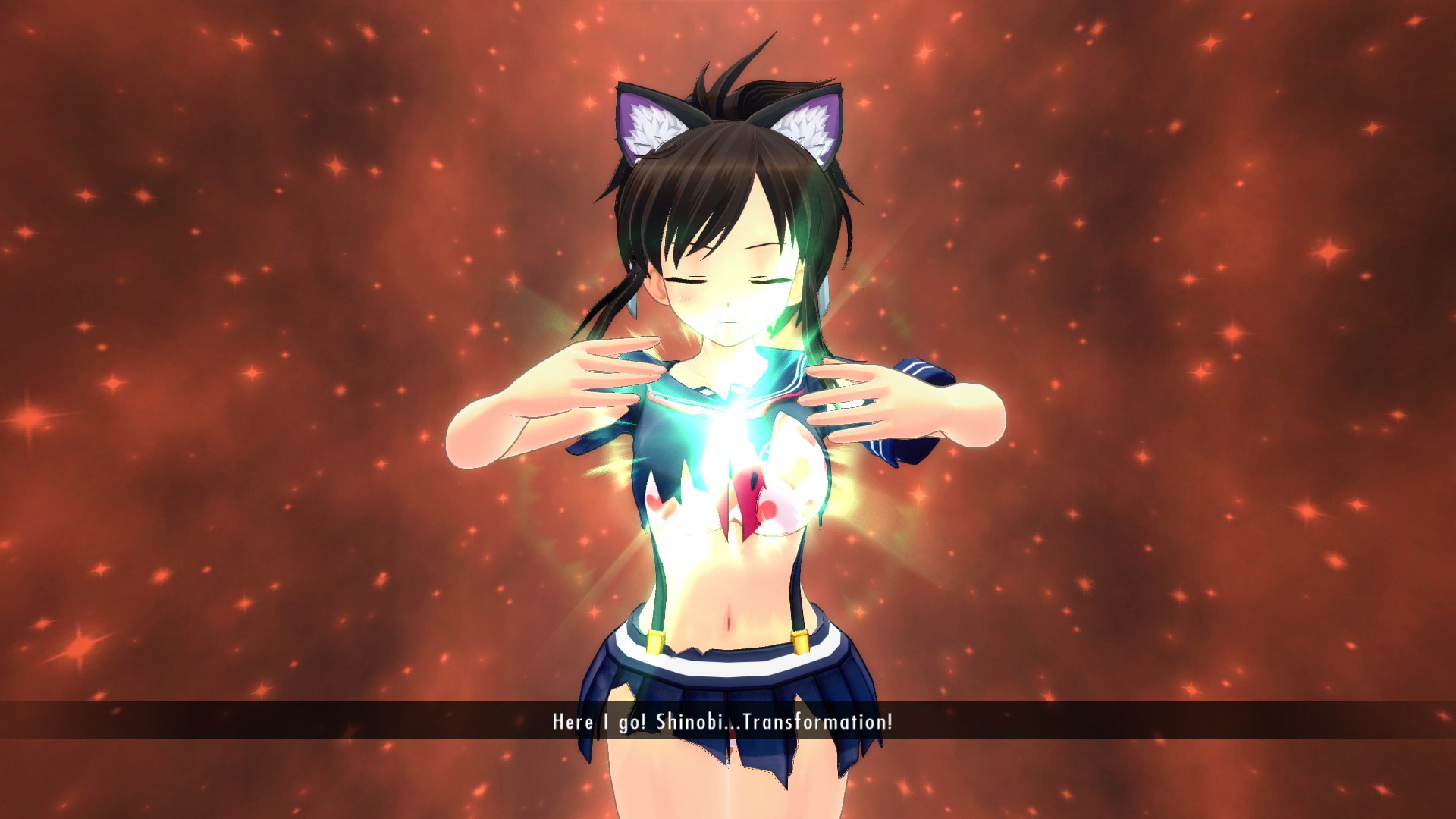 The Ninja Room deserves special mention. This forms the main game hub, where you select your next mission; visit the dressing room (complete with diorama and intimacy modes, of course!), shop, or library; alter game settings; etc. But the whole thing is a full 3D scene of your school’s elite ninja rec room, with the relevant girls sitting around doing their thing. Each menu option moves the camera to focus on a different character, and the girls’ expressions and actions change slightly depending on the mood of the story. It is exceptionally well done, but the girls are only ever shown in their default costumes; using selected outfits would have made it so much better! 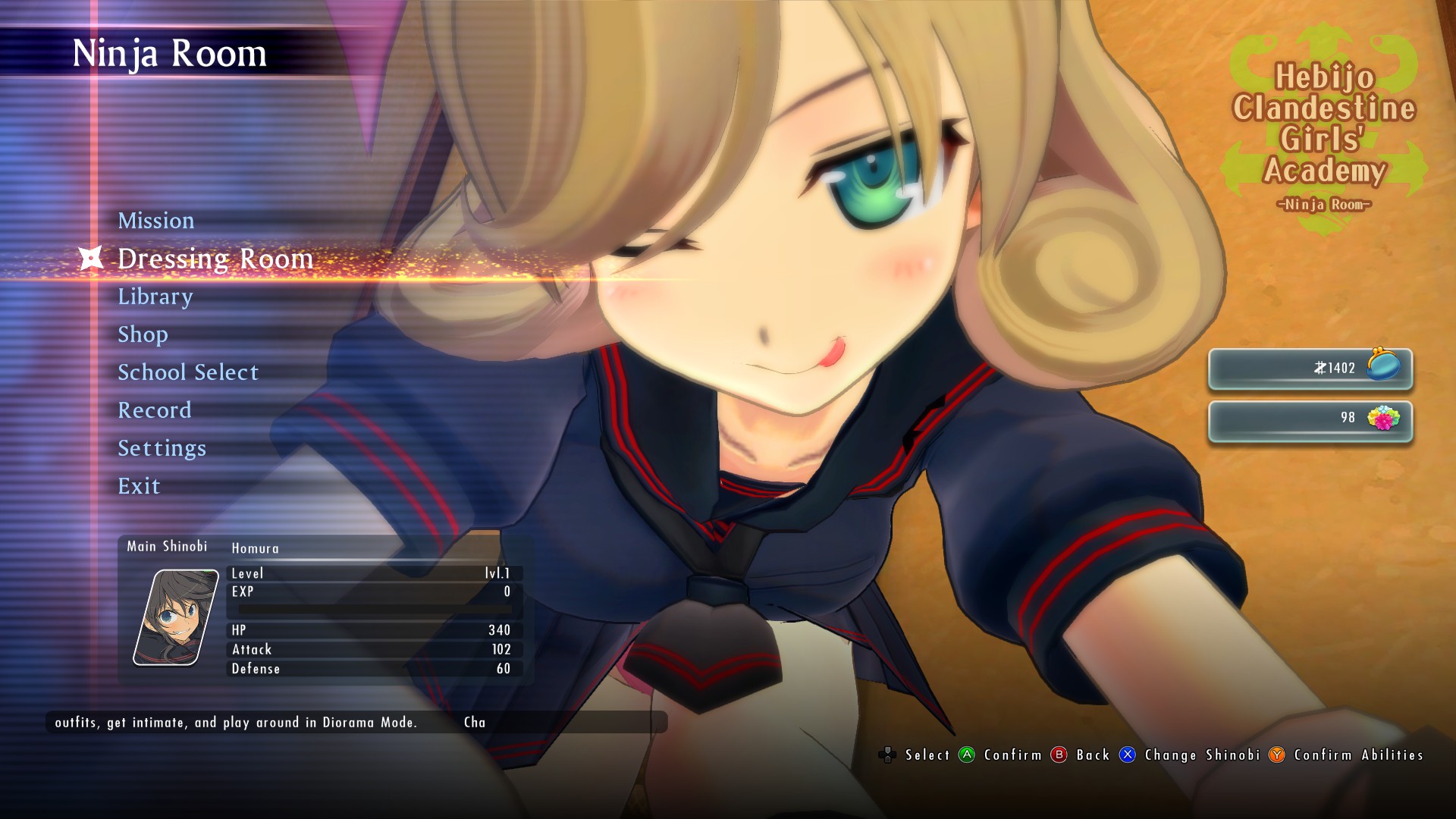 World and secondary character graphics aren’t as impressive as the shinobi girl graphics, but they’re interesting enough. There’s a good range of levels, though you’ll see most of them multiple times, but more variation in basic enemy types would have been nice. 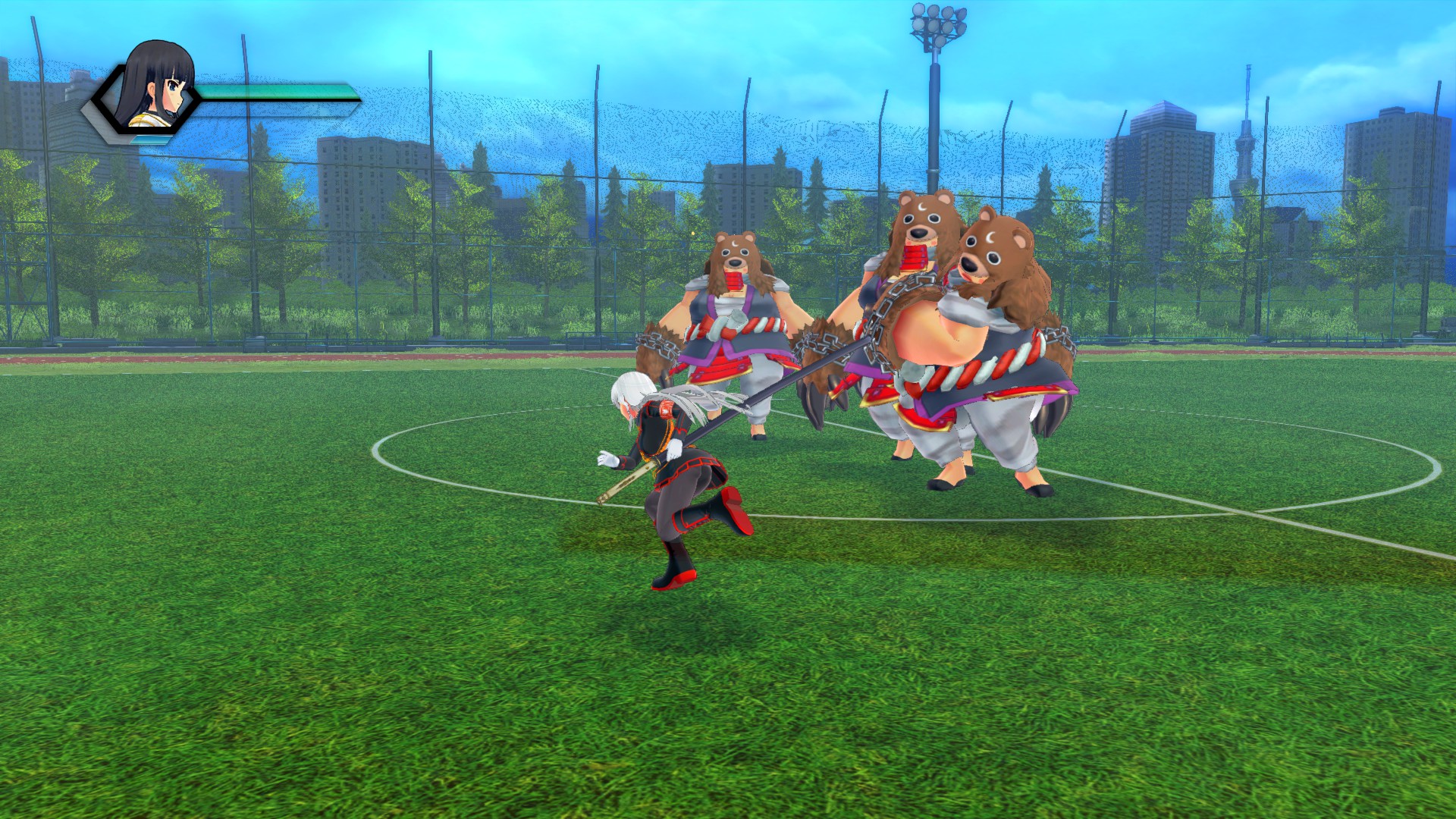 All main characters are fully and professionally voiced. They all sound good, though I have no idea how closely the spoken Japanese matches the English script, which is error free. Katsuragi sounded a bit rougher than I remembered her from the other two games I’ve played, but that could be me. Music is typical of the genre and helps to keep the adrenaline pumping while you’re beating the clothes off other shinobi — as if any help were needed! Sound effects are great and fit the game perfectly; the aerial rave *ding* is especially helpful.

Performance is flawless on a GTX1070-based laptop at 1920×1080 with everything on maximum. 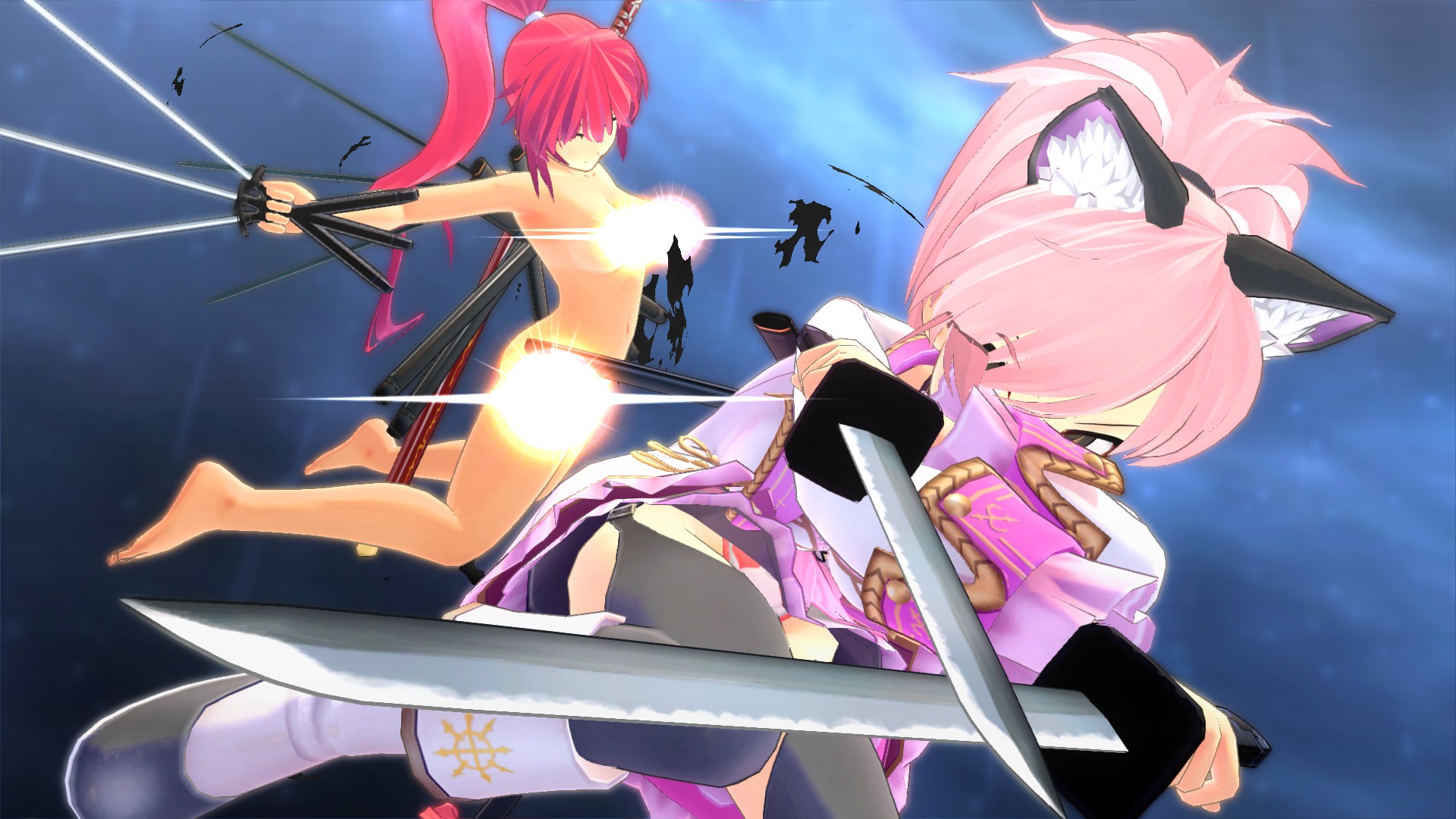 Burst Re:Newal is a mission-based third-person beat ’em up. Each mission you select one of the shinobi and fight your way through either waves of cannon-fodder-like plebs, enemy elite shinobi (the other SK girls), or both. Most of the missions are played out in fairly small and quite bland levels around the town and shinobi schools in which the game is set, keeping the focus more on the girls than the setting.

The action is very fast, with huge combos and juggles. Controls are spot on; I played with a XBox360 controller and it worked brilliantly. Though initially I found remembering some of the buttons a bit tricky, after playing for a bit the most commonly used ones were second nature, and I could focus on starting to use the others to better effect. Each girl plays very differently to the others, too, forcing you to mix up your strategy; you can probably tell who quickly became my favourite. 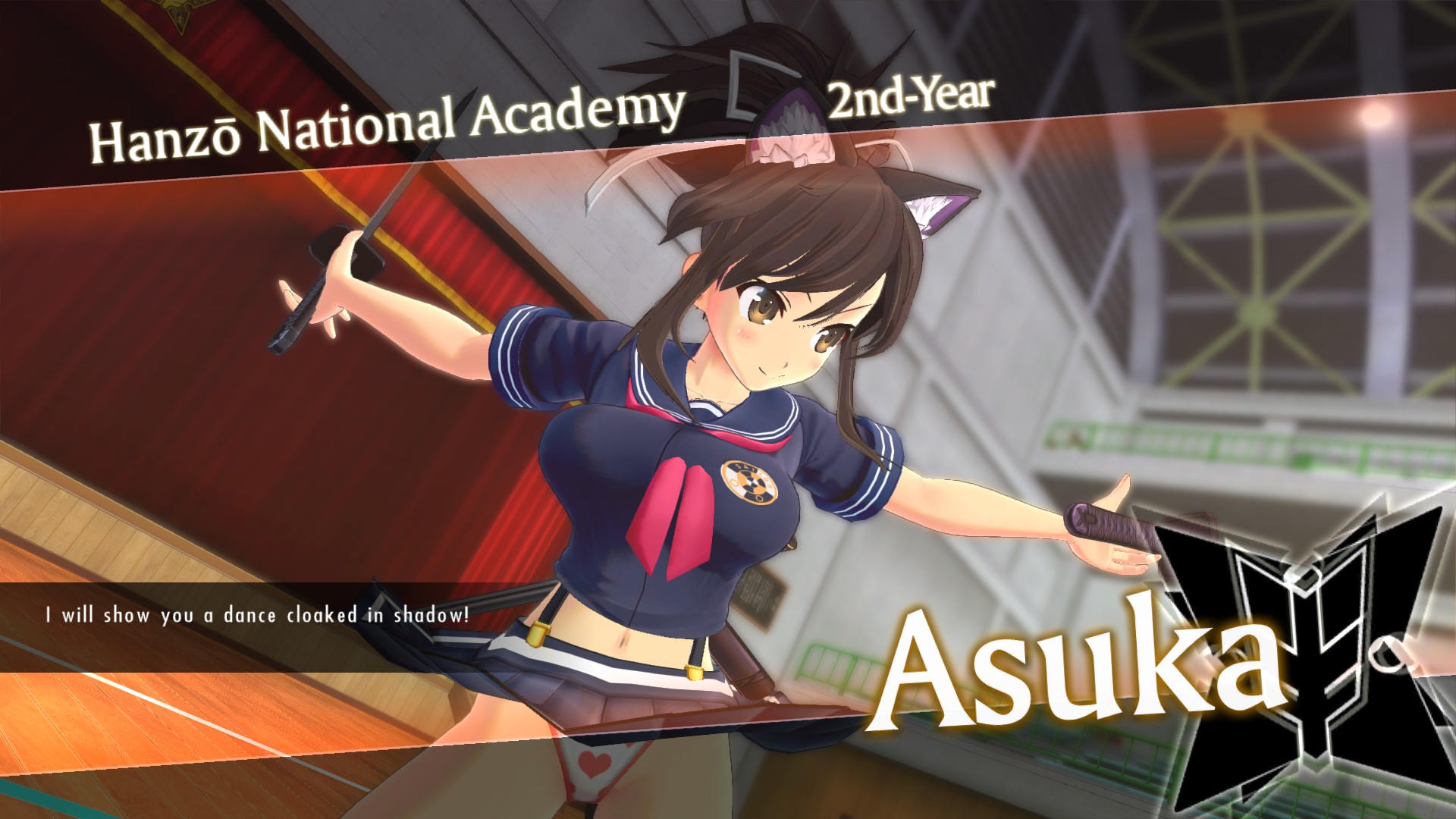 Most missions can be played normally or in Yin/Frantic mode. In normal mode your character wears the first of her assigned outfits, selectable from the ninja dressing room, and both deals and takes a reasonable amount of damage, too much of which can tear her clothes. After fighting for a time you’ll fill up your ninja power gauge, at which point you can perform a shinobi transformation to enter Yang mode. A rather distracting animation plays in which your girl’s clothes disintegrate and are replaced with her second chosen costume; her health gauge is completely refilled, her attacks become more powerful and unlock a different set of combos, and two special ninja power moves become available.

In Yin mode your shinobi starts the battle by tearing off her clothes, leaving her in her underwear! For some reason this makes her take increased damage from hits, but also unlocks new combos and powers up her attacks, allowing her to dish out unrivalled damage. (Depending on the underwear you’ve chosen, it also provides some great screenshot opportunities!) Modes are selected separately for each battle, but both Yin and Yang mode have separate experience point gauges and unlock different skills, so you’ll develop both modes as you play. 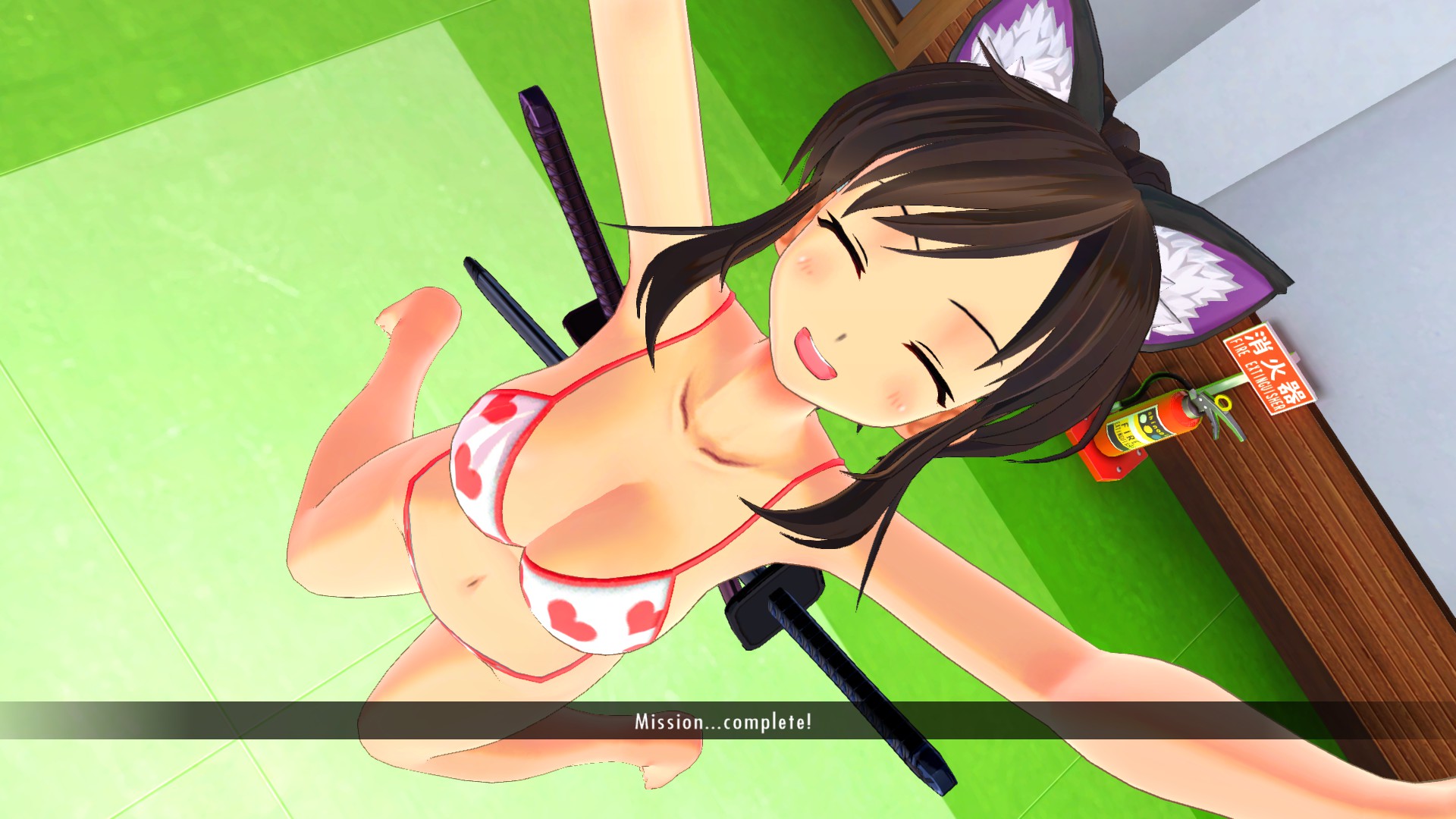 Missions come in three types: story, free, or training grounds. Story missions are the main draw and there are a lot of them: 41 each for the two schools. The story is typically silly, but mostly enjoyable, told through a mix of text-over background interludes (with auto-advance, which sometimes causes you to miss the last few words) and in game-engine cut scenes — complete with your chosen outfits for the shinobi! Story missions are first locked to certain characters as dictated by the plot, but you can go back and revisit them later to play with different characters.

Free missions are outside the main story, but are unlocked by completing parts of it. These aren’t central to the plot, but most seem as related as many of the story missions, so to me they’re interchangeable. I unlocked 15 free missions on my first play through; I’m not quite finished my second yet, but I expect there will be 30 in total. Each story and free mission you complete rewards you with coins to spend at the shop, as well as experience points in your chosen mode, and sometimes other unlockables. 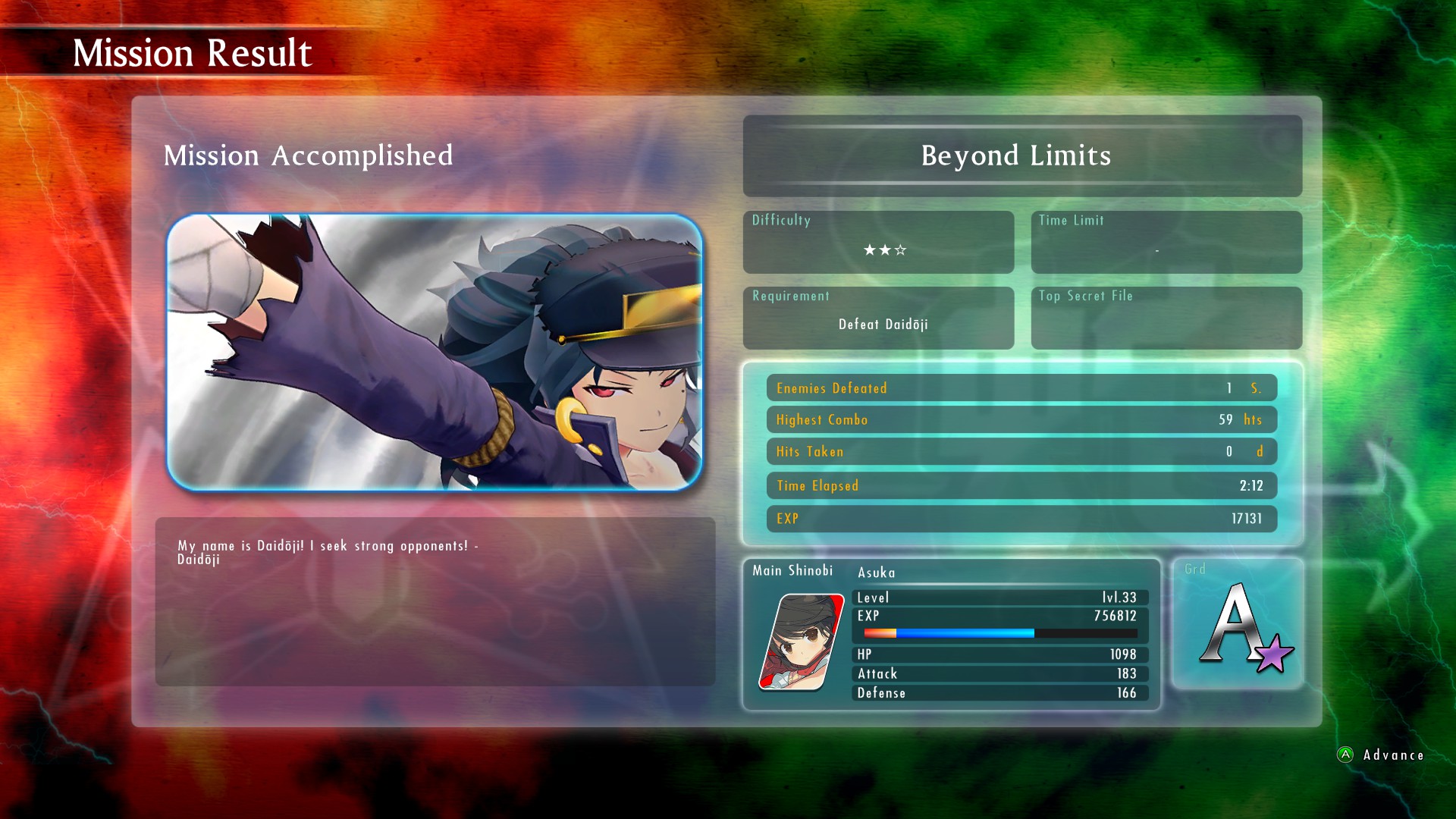 The training grounds let you choose one of the different stages and a character to play, then summon any of the normal enemies to battle, allowing you to practice your moves against them. There are no rewards and I couldn’t see a way of summoning other elite shinobi. It would have been great to square off against a whole elite squad at once.

There’s no multiplayer, but plenty of replayability to unlock everything, and there’s a host of Steam achievements for bragging rights. There are fewer costumes than some of the newer games and they seem to be less adjustable, but there’s still plenty to keep you occupied for many hours. If you’re quick with F12 you can snap some lovely screenshots for your profile, too! 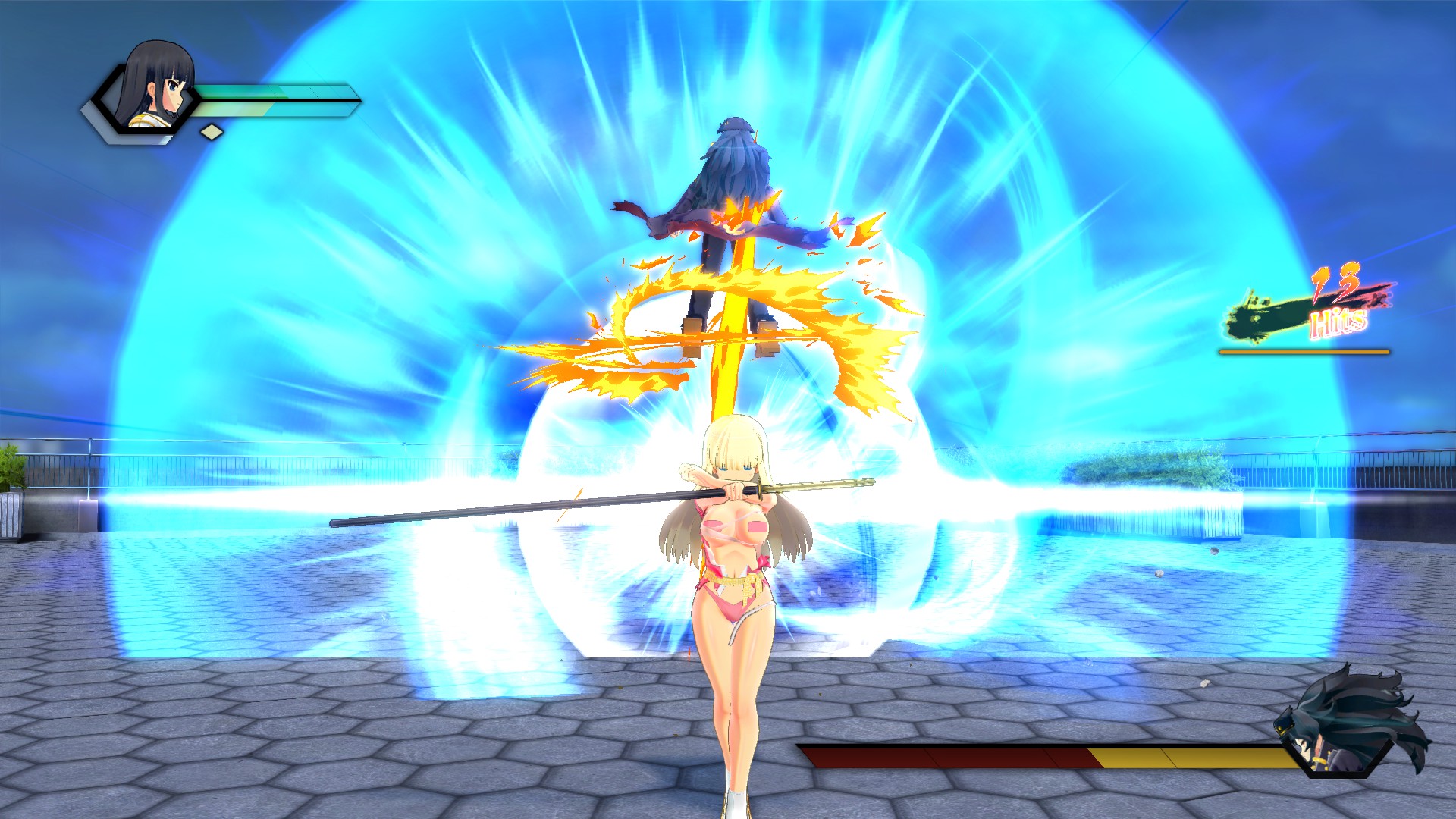 If you’re a fan of any of the newer SK games and you haven’t played Burst then it’s a no-brainer: get Re:Newal and ignore any judgments from your Steam friends. Real friends wouldn’t judge you for playing with buxom shinobi!

I love this series more with every game. 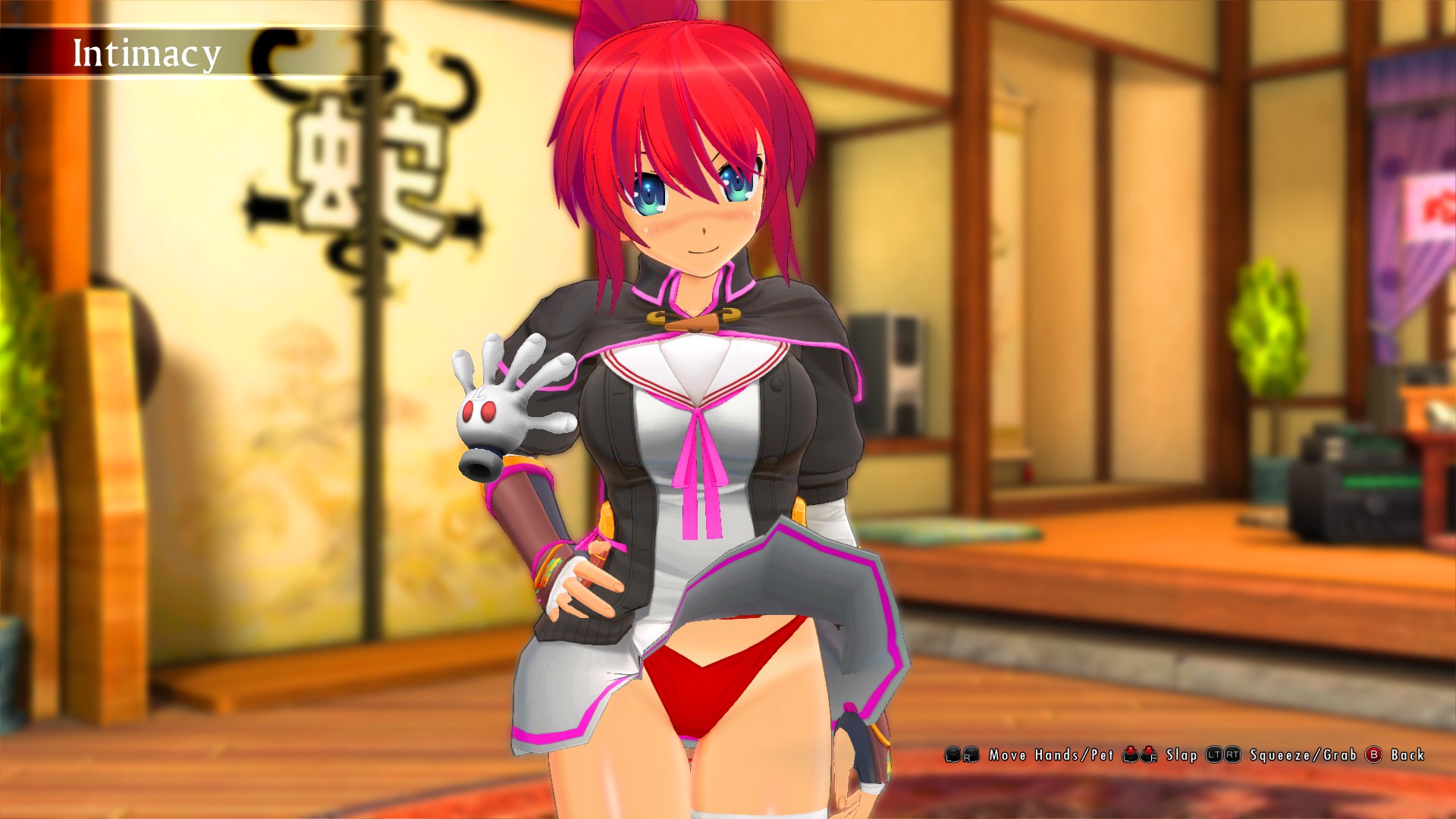