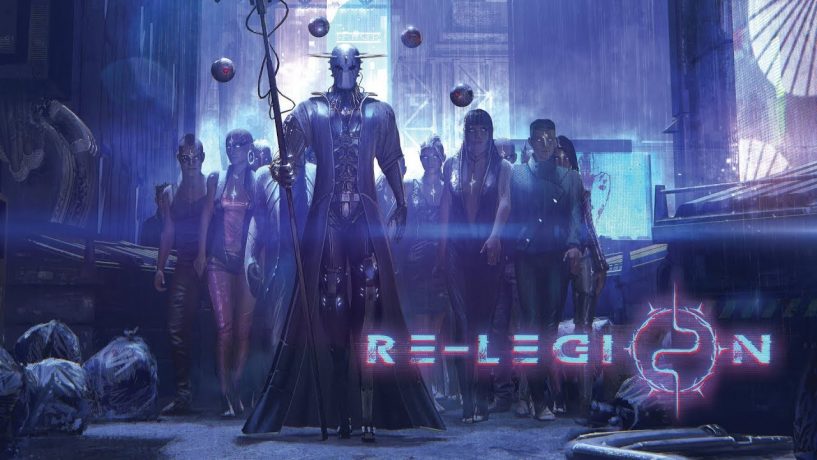 Cyberpunk RTS in which you convert your fellow citizens to your cult, which seems to be mostly about sending them out to die.

Re-Legion takes us to a cyberpunk world, along with its futuristic city brightly lit by neons in the night. The aim: fomenting a revolt against the corporations that control the lives of everyone. The means: a cyber-cult around a playable prophet. The result is a real-time strategy game in which you convert loitering citizen to fill the ranks of your ever-growing army of followers.

Newcomer in the cyberpunk brood

Cyberpunk art has a very peculiar atmosphere. This particular genre of a future noir in which humans are crushed by technology in neon cityscapes was popularized by Neuromancer, Blade Runner, and Ghost in the Shell, and it has been a strong source of fascination since then. However, cyberpunk RTS games with pretty graphics are not common. The closest we have had were Syndicate and Satellite Reign, controlling small squads of enhanced soldiers. On the other end of the spectrum, Neon Chrome and Jydge were the action counterparts with a single character to direct. 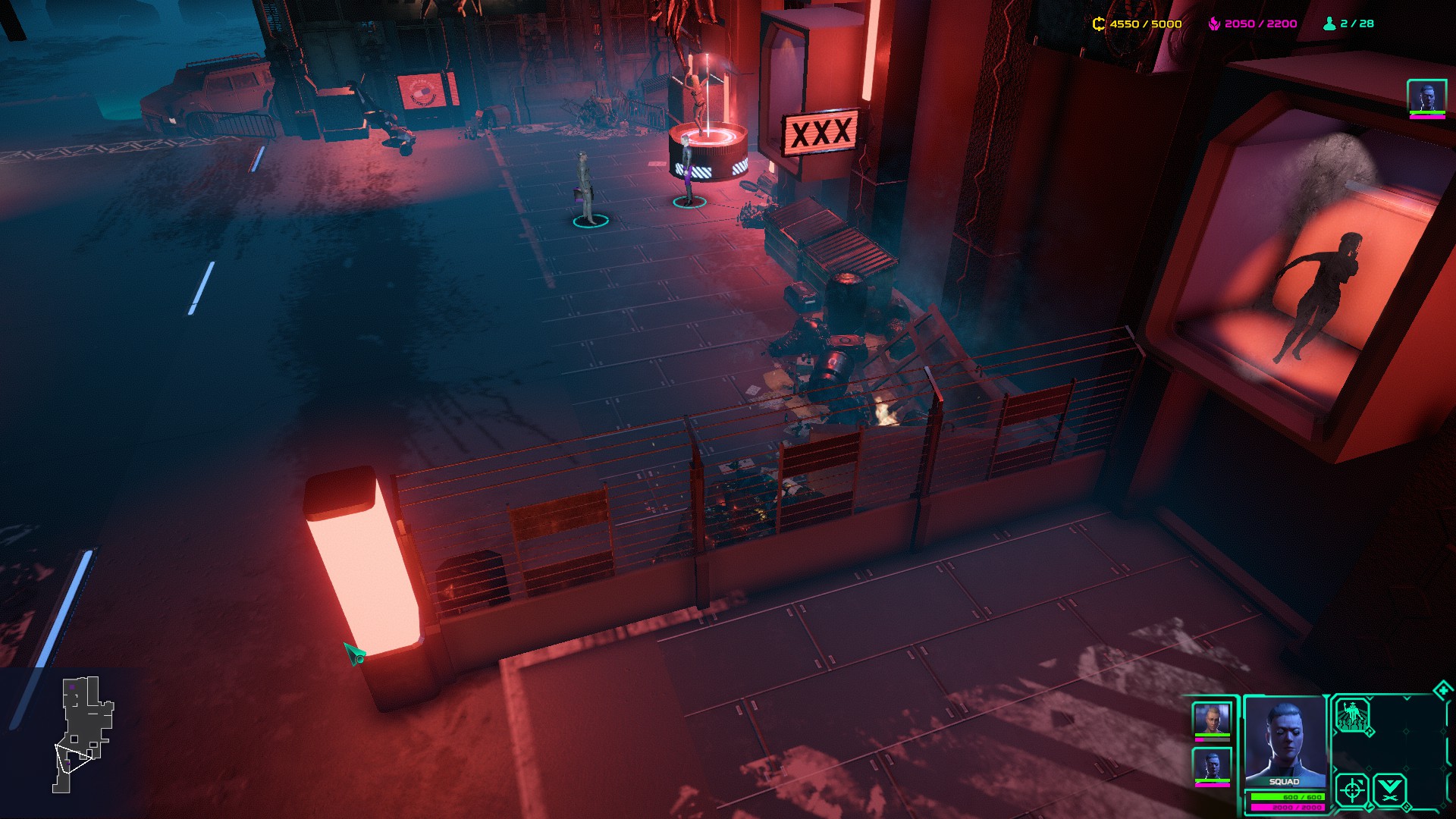 The first character that we meet and control in Re-Legion is our prophet. At first, he is a regular human, but once he meets up with a few key characters, they are convinced that he can turn the tide against the current manipulative society. Everyone seems very pleased to switch to a manipulative religion and prop up our hero as a leader they would die for. Who wouldn’t blame them when he looks like Pinhead in Hellraiser? There is a little bit of narration from mission to mission, especially at the start of the adventure, and it’s enough to get immersed in this world. 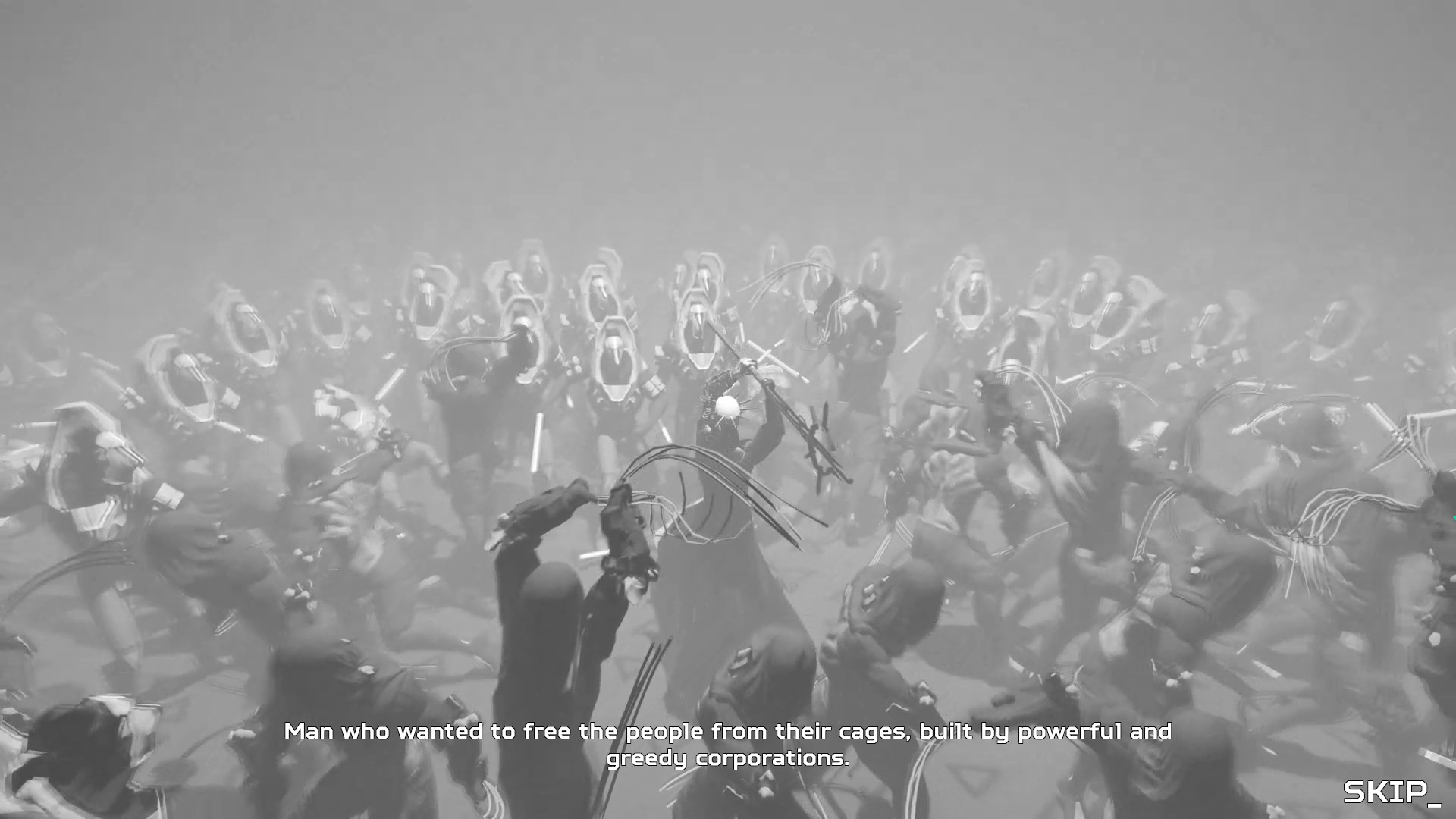 Pretty but not technically sound

And what a world! There are tons of nice little details, like neon signs of the walls, pretty statues, beautiful temples, and lasers tearing people apart. There is fitting music to enhance the experience, and I was quickly hooked. Well, that is until the first large-scale battles occurred and my framerate tanked so much that I had to set the graphics to low and suffer the never-ending saves, or the occasional crashes when loading a save. And the bloody awful AI. But let’s not get ahead of ourselves… 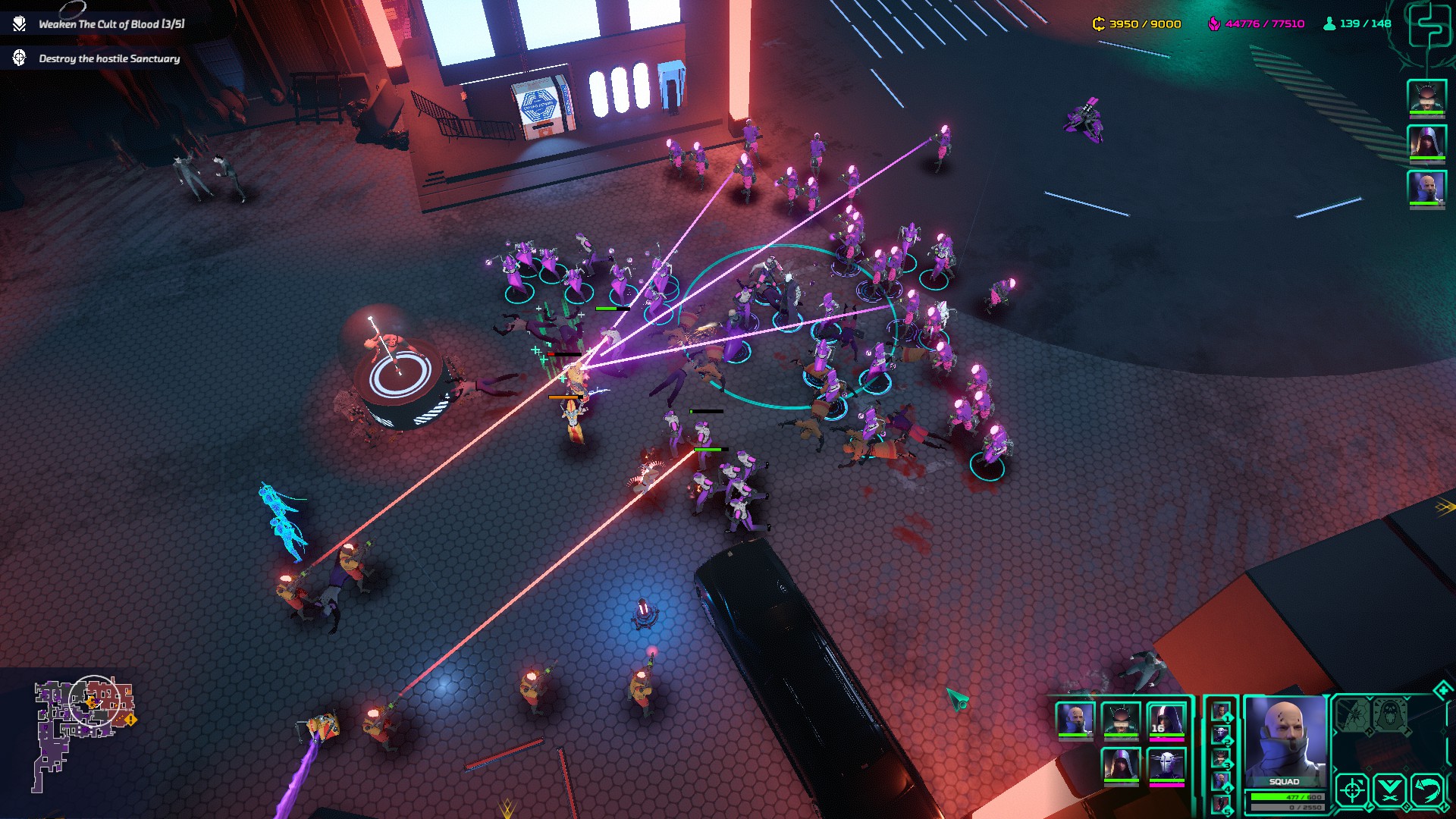 Let’s go back to basics and talk RTS mechanics. Our prophet can directly bring a new flock to his church, or preachers roaming the streets can also convert new citizens. Idle followers gather at the sanctuary, which is very practical in order to quickly get a hold of them. Any basic follower can be converted to a specialized unit, such as hackers that collect resources at crypto banks. There are also assault troops, several types of melee troops, cloaked assassins and healers that can also pray at temples to collect faith. Faith and crypto money are consumed when converting to a specialized unit, or when buying special abilities. The concept of using humans as a third resource to gather and train straight on the battlefield is used really well here, while it makes the city feel alive. 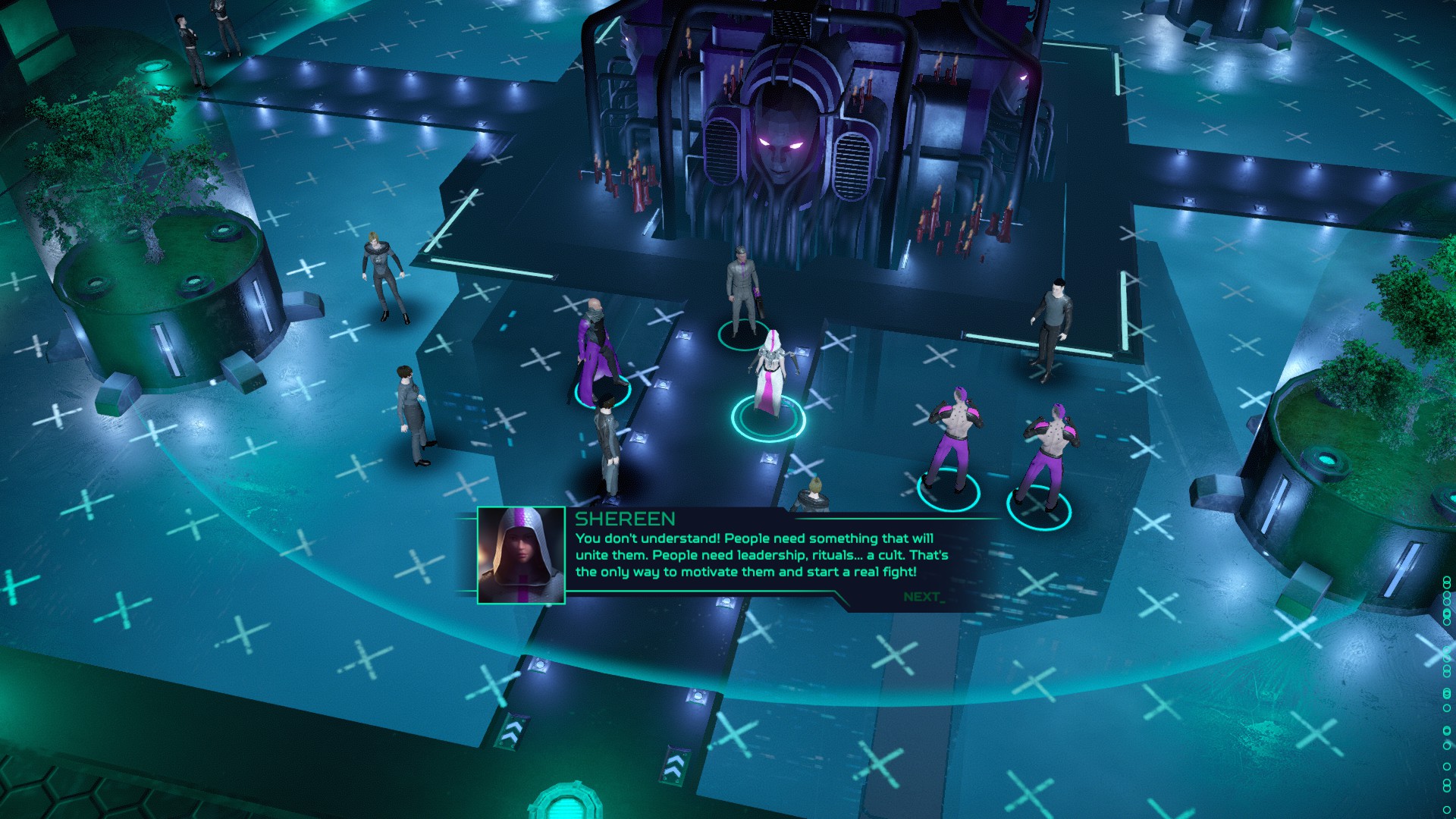 There is no base building. Instead, you capture a building or a statue and then the entire district is yours. The more districts you have, the more total followers you can sustain. In terms of game flow, it’s very different from classic RTS games with base warfare and resources to gather on the map. Here, it feels much more intimate or guerrilla-like, conquering districts one at a time until the whole map is under control. It would be almost be relaxing if… if controlling units was not such a pain. 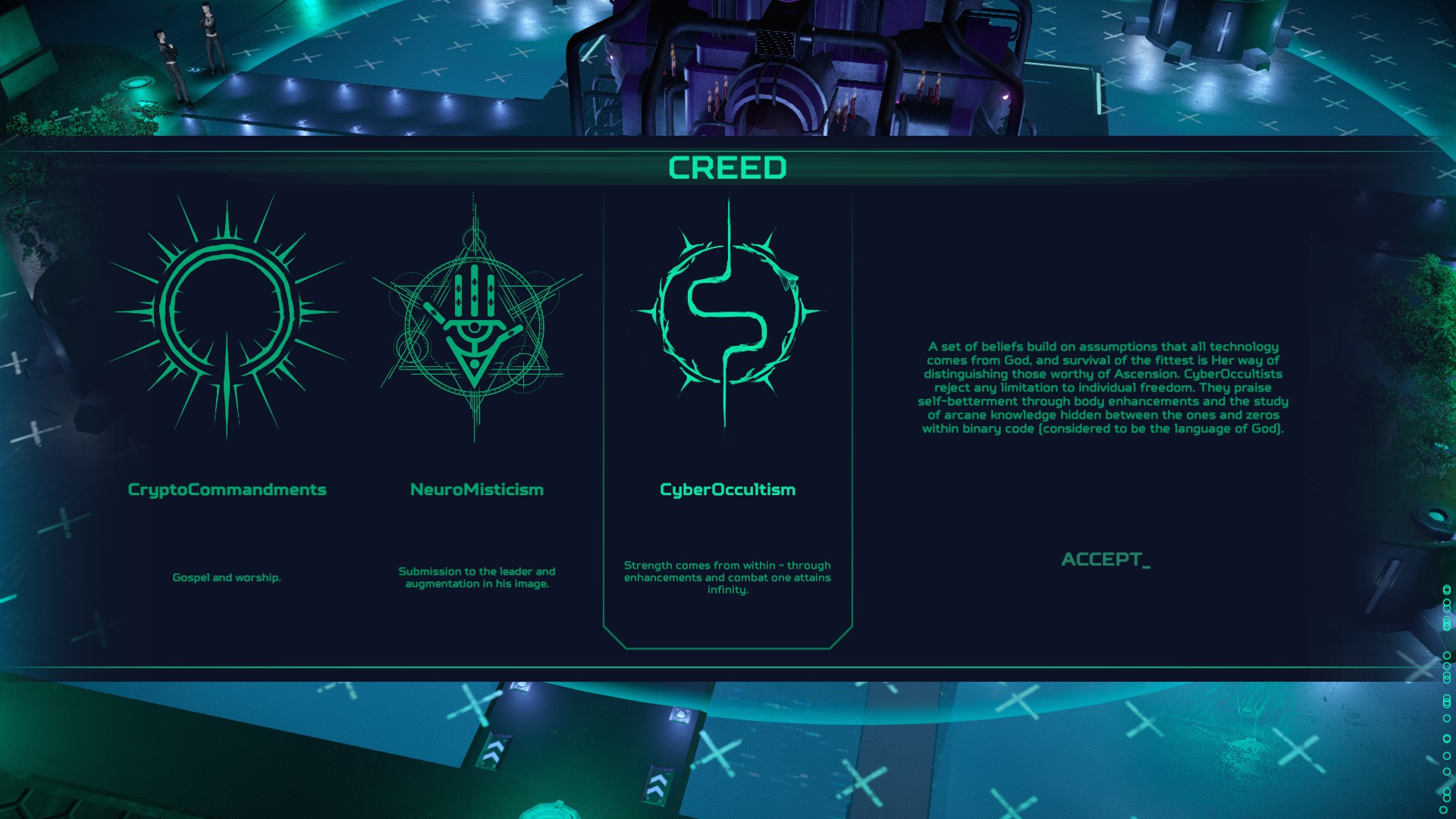 It’s all wrong, and I will attempt to convey why. First and foremost, you have several heroes to control but they don’t react to F1 F2 F3 F4 as in WarCraft III, they have to be assigned to groups with CTRL + 1 2 3 4 and so on. With several types of heroes and many types of troops, our 1 2 3 4 quickly become crowded. It would be ok if the units did not need so much micro-managing, but they do, and it’s awful. Each unit has specific abilities, such as a shield or a headshot, and it’s a pain to control all of this in the midst of the action. The small UI far in the corner doesn’t help, but the main problem is that the action happens very quickly, units die in a second, and they are constantly out of position. It’s a pain to control the positions of everyone (more on that soon) while attempting to use their abilities, and that’s when it’s on a single screen. But the maps are not a straight line, there are lots of paths to protect or attack, all the while having to send new followers to the front. It’s a nightmare, and you hear that coming from someone who was playing WarCraft III competitively. 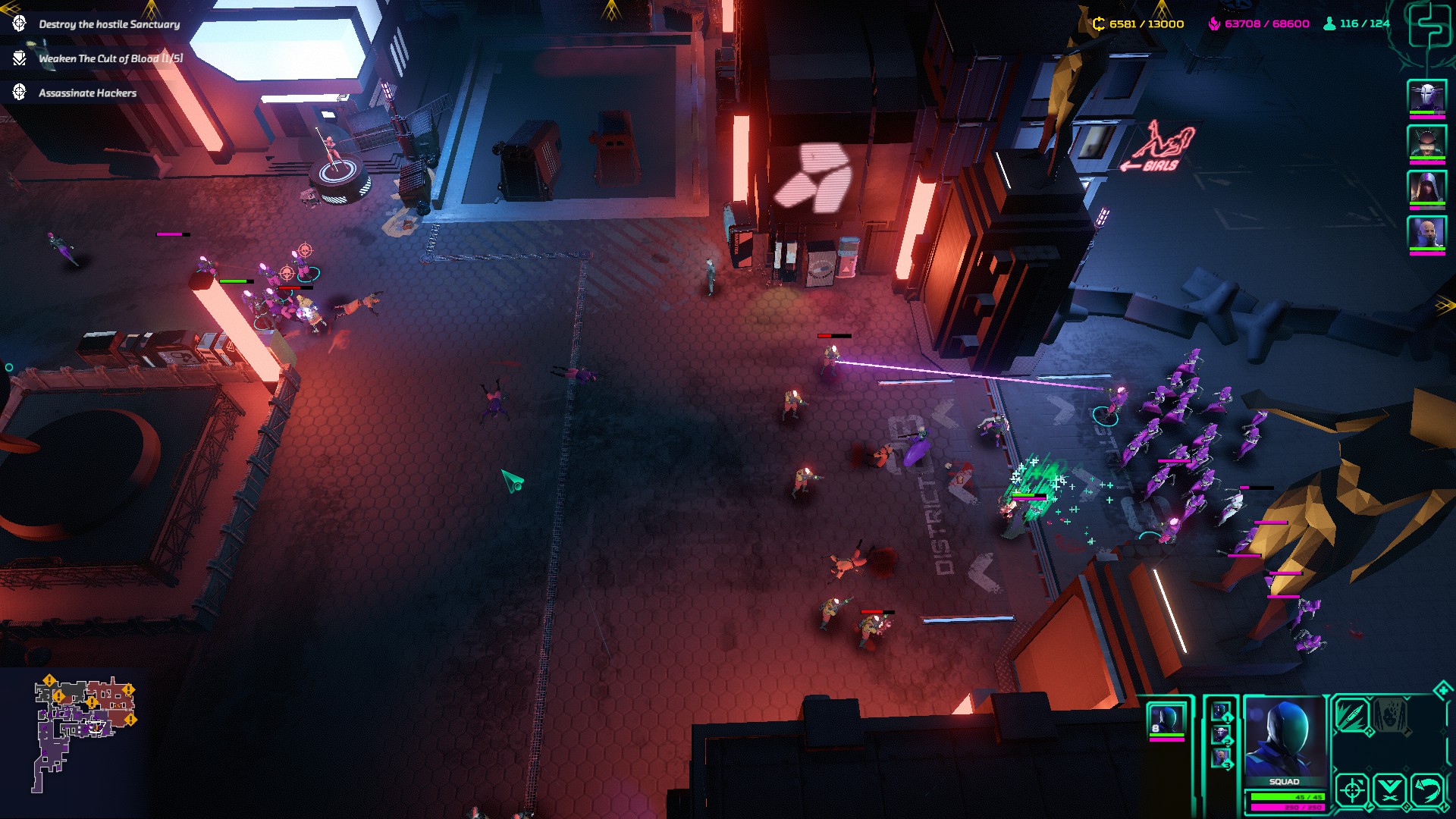 I mentioned units constantly out of position, and well, there is a lot to say about that. When you are leaving troops to defend a position while you are yourself busy somewhere else, here is the deal: either you ask units to stand in place and they won’t lift a single finger when their neighbors get slaughtered one by one, or you don’t lock them in place and they will move half the screen when they see an enemy and get slaughtered in an enemy district far from your healers. Or the healers sometimes offer themselves up as meatshields; when attacking, they are also suicidal, as the other troops will engage from their normal distance while healers try to sit on the point that you attack with your group, and they get killed first. That’s why it’s mandatory to keep them in a separate control group. Even when you take control, the AI of a melee unit can just decide to move past attackers rather than engage in combat, and then they stand there, doing nothing. The passive AI can be a problem too, when newly converted followers take an unsafe route back to the temple and get slaughtered on the way, forcing you to dispatch troops to a tiny street just to facilitate the stream of the flock. Or when an enemy preacher slipped past your chokepoints and is converting citizens inside your own territories, forcing you to micro-manage yet another small task in the sprawling city, and with enough firepower to prevent your own troops to succumb to temptation. 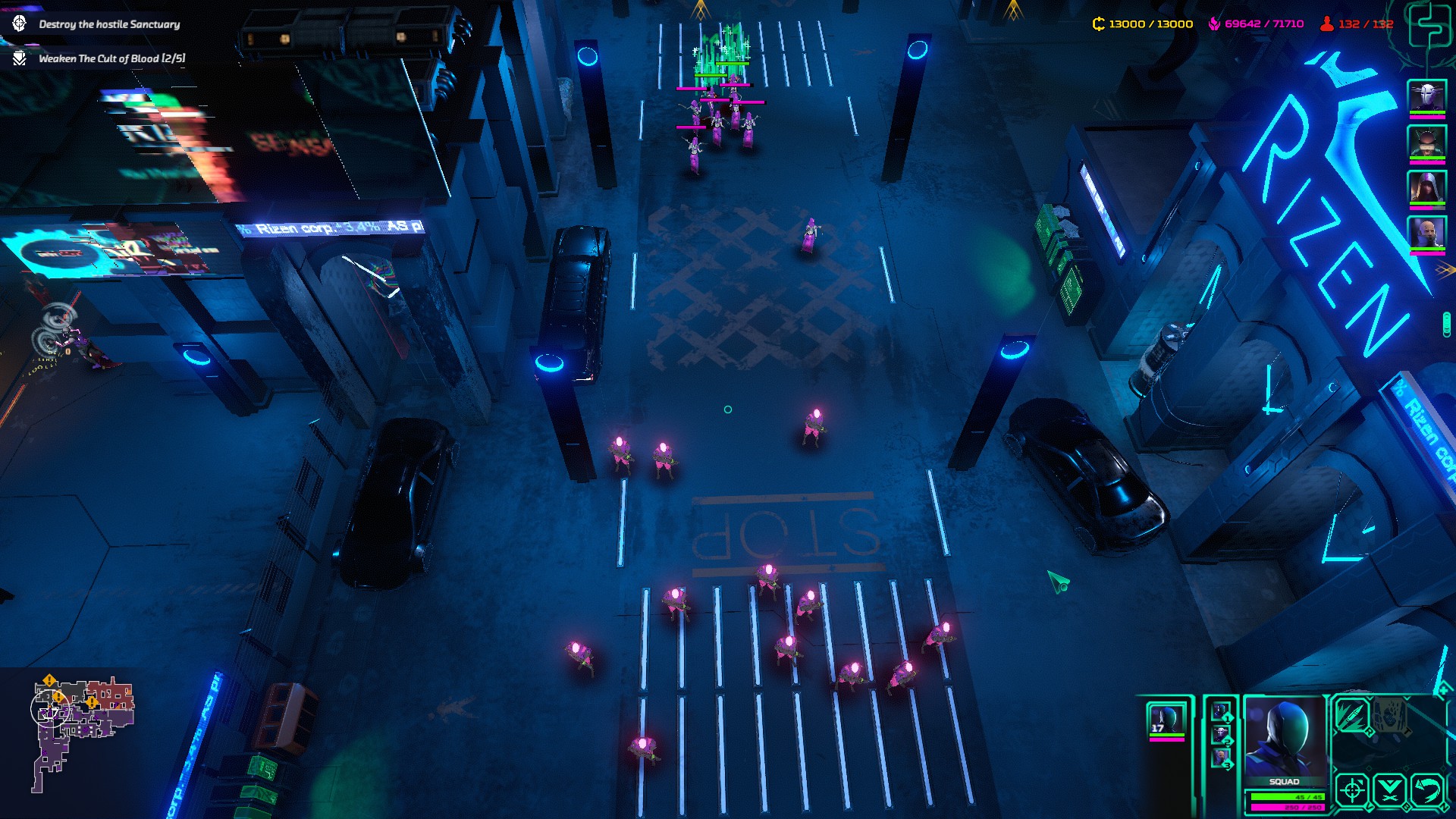 The result of these micro-issues is that this game is particularly heavy on micro-management without helping you to manage your troops correctly. For instance, the SHIFT key does not queue orders. No queue order in 2019, it’s astonishing. So, when you want to get new troops to an important location, first you have to locate citizens, then you give them a specialization. But it takes a few seconds to become effective, and it stops them in their tracks, so you have to wait before finally giving them a move order to where they are needed. And as units die quickly, those few seconds doing something basic and futile are not spent controlling troops getting slaughtered somewhere else because they decided to move out of position when attacked by an enemy wave. 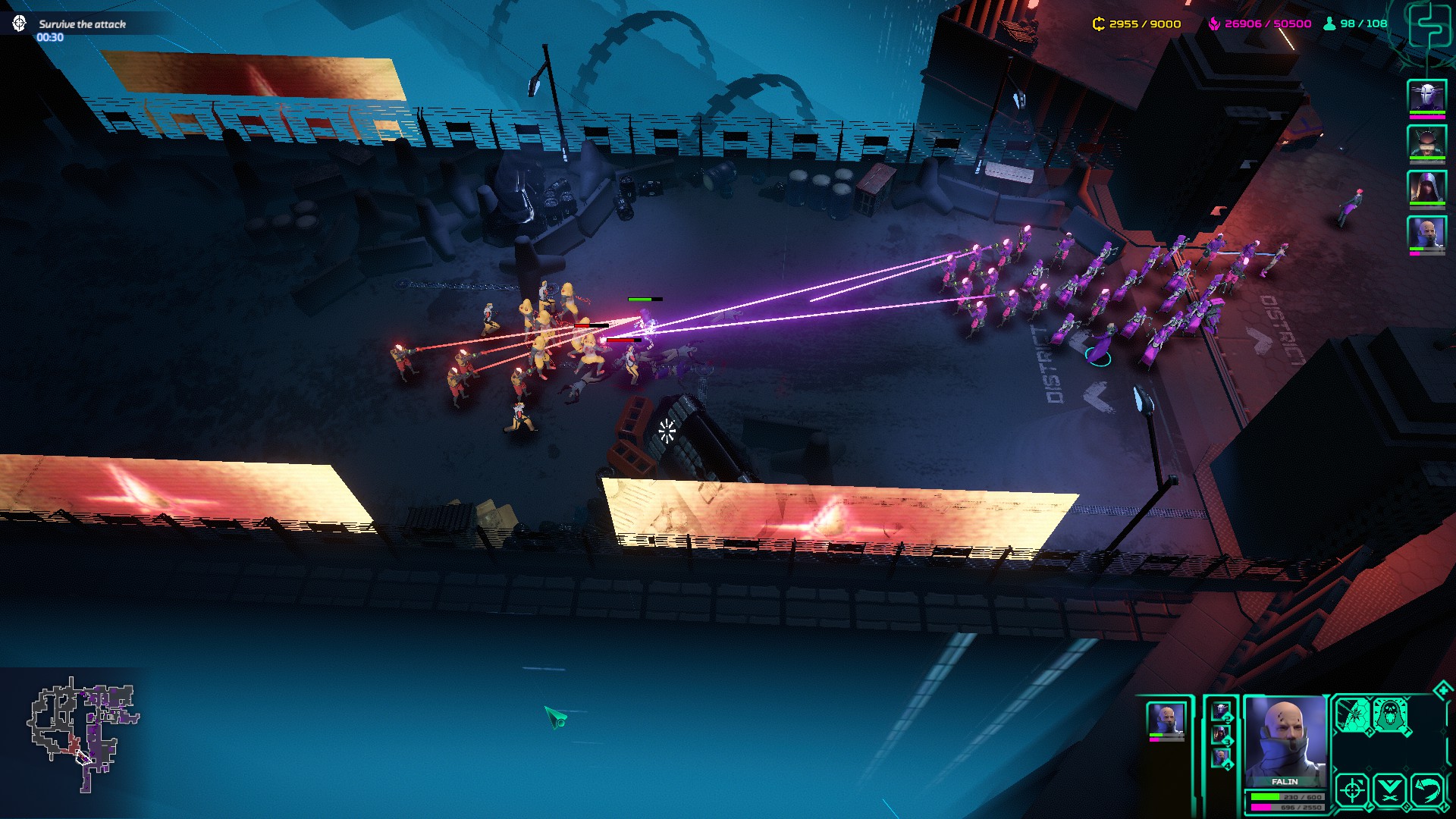 I managed to bear the awful controls until I came across a defense mission in which I had to protect two bridges against a constant flow of heavy enemy attacks. After saving and reloading several times, I succeeded, then I was tasked to attack the enemy. But those waves kept coming, and since it’s not possible to build more than one defensive turret, I was tearing my brain and burning my mouse by attending to all these troops in several locations at the same time. That’s when I decided that I had enough, and would not inflict more of this game onto myself. Enough cybertorment, I left cyberhell.

By the way, don’t get lured in by the easy first missions: it gets harder over time, always remember to save your progress. There is only the story campaign to play, there is no multiplayer, no skirmish mode. 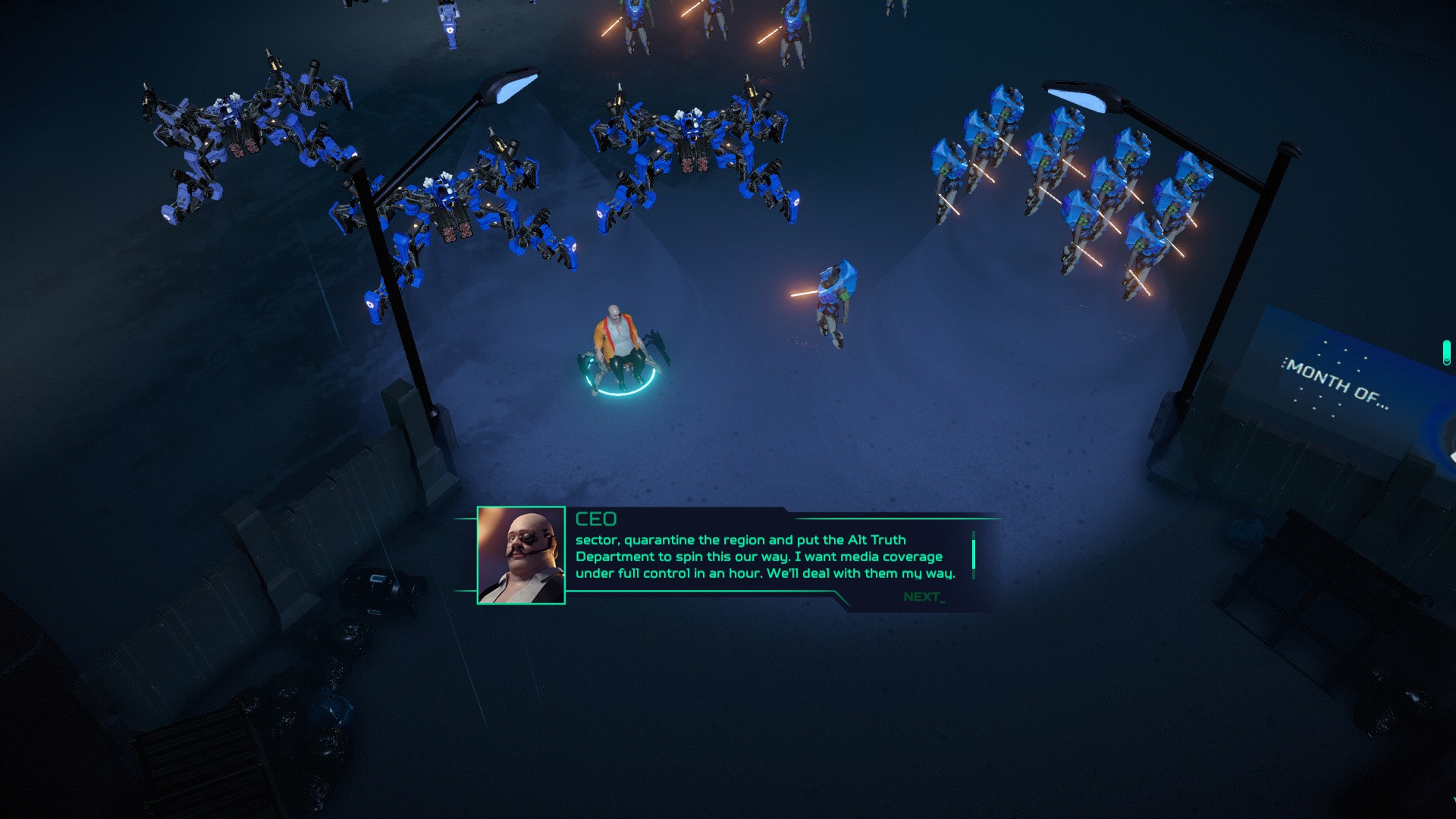 Re-Legion builds up a great atmosphere and I got immersed in its first missions, converting my fellow citizens to an army of dangerous followers. However, it quickly became an unpleasant RTS, demanding a lot of micro-management while not giving the proper tools, and sometimes even sabotaging the player by constantly throwing units in harm’s way.