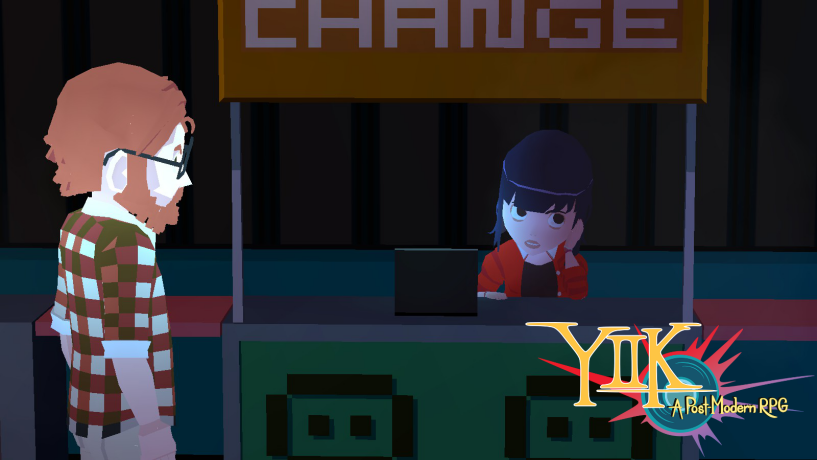 Is it weird that I’m still stuck on the fact that Alex never got the dang groceries? Especially when he complains about the fridge being empty?

It’s the year 1999 and our main character, Alex, has finally graduated from college and decides to return to his hometown, Frankton. Everything seems like how it once was, up until he finds himself chasing a lonely cat into an abandoned factory. After fighting through some enemies, he comes across Sammy (or Semi) who supposedly lives there with her cat, specifically the cat you were chasing. However, this little meeting isn’t all sunshine and rainbows. Soon after meeting up and fighting together, Sammy is abducted by some strange beings. Alex can’t get Sammy’s abduction out of his mind, and with it being posted on an online conspiracy forum called ONISM1999 he won’t be the only one haunted by what he saw. 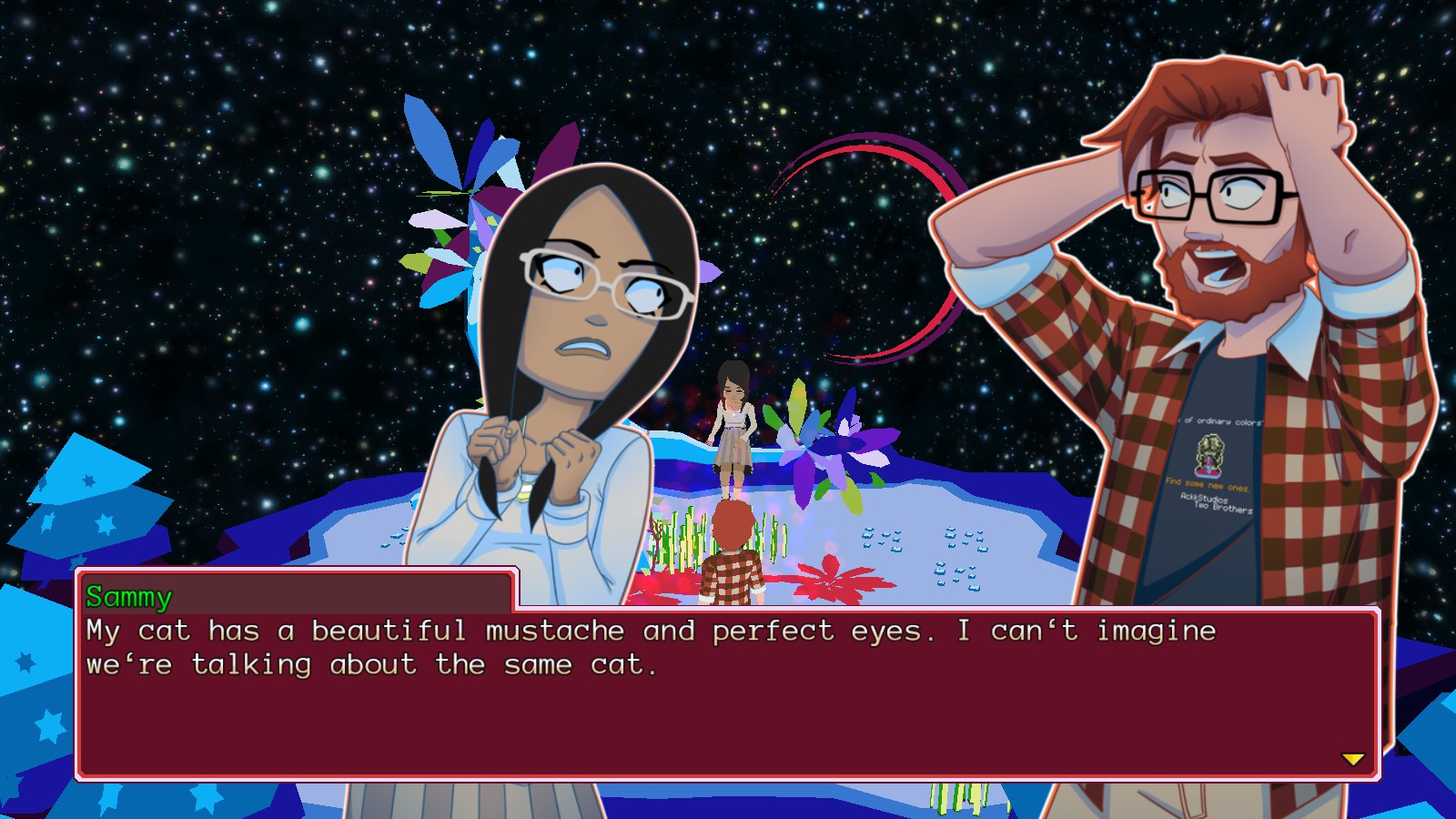 In the process of finding out what exactly is going on, he meets others willing to help: Michael, a childhood friend interested in photography; Rory, a pacifist currently grieving over the loss of his sister; Vella, a musician that doesn’t hesitate to stand up for herself or anyone in need (and who I grew attached to); and lastly the enthusiastic anime nerd Claudio with his hula hoopist sister Chondra, who are still holding out hope for their little brother still being out there. Together, they’ll travel and fight their way to find out what happened to Sammy and whatever Y2K has in store for them. 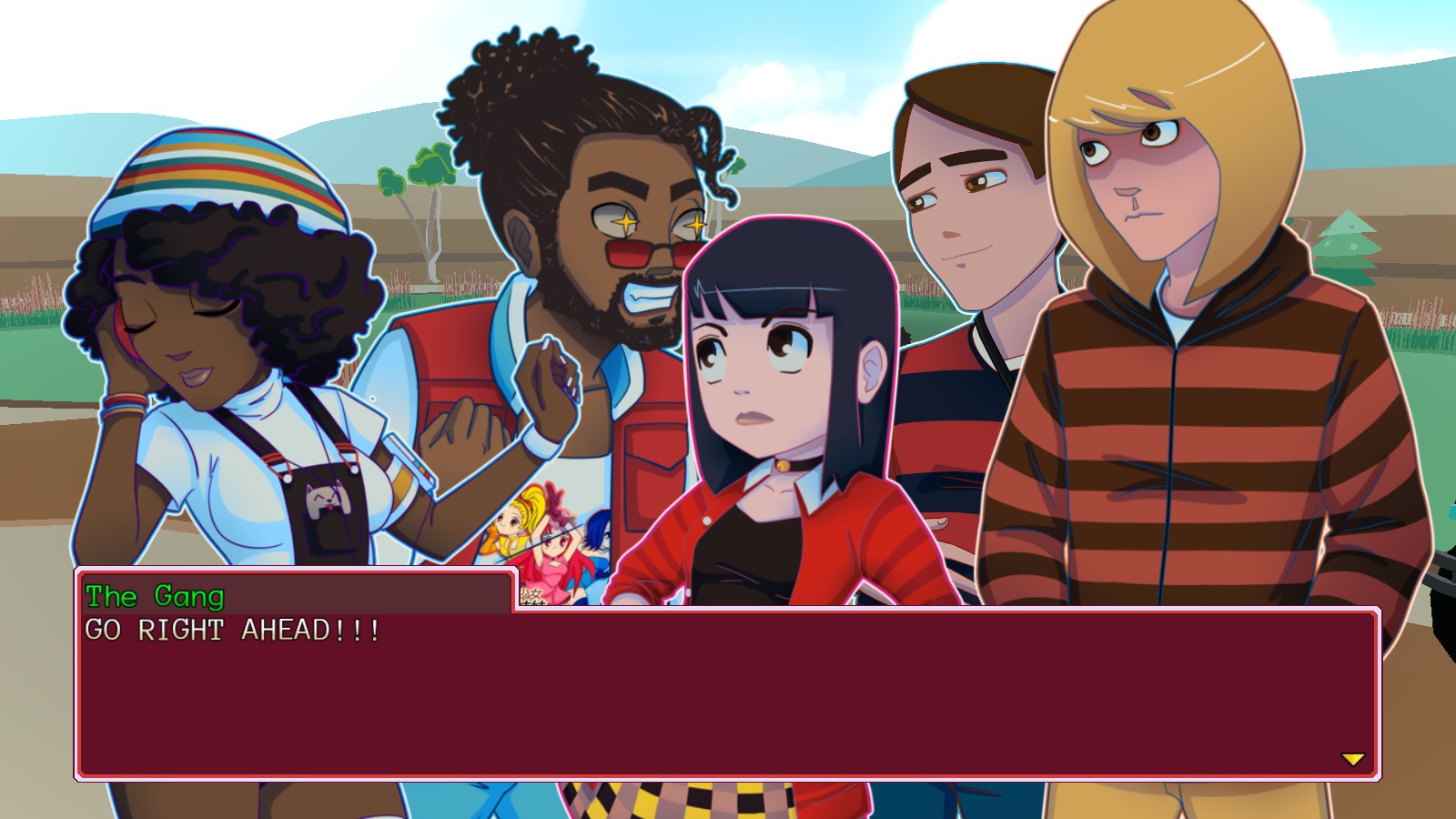 As I was playing YIIK, I really grew to hate Alex by the end on Chapter Two. I didn’t even want to play as him, though I did still continue on. Even after he gets a hint of being redeemed, I didn’t buy it and still continued to hate him despite the intention. His mother loses her job right after Alex realizes he should stop being an ass, but he doesn’t even take a job that Rory says he can get him (even though his mom paid for his college tuition). Mind you, it’s months before his mom says she found a job so I can only imagine how stressed she was. Everything he said made him come out as a douche that thinks he knows everything, which his character art and voice delivery doesn’t help nor does his constant monologue (which makes sense later on). The monologues in particular were a bit annoying (especially when it just restated what already happened) and wasn’t needed as much as it was used. I also don’t even know why his friends kept hanging out with him, I know I wouldn’t. I’m going to spoil this, but there’s even an option to kiss three different characters and I just couldn’t because they deserved better, there was no chemistry anyway and it was when two of them were vulnerable (aka the worst possible time to kiss someone).

Anyway, once you’re able to travel around the overworld map and the various locations, you’ll get to the turn based combat. Everyone’s attack, whether it be a normal attack or an ability, is a mini-game. Each character has their own mini-game, which goes down to how you time your button presses, to build up a combo. It can go down to pressing a button in a colored area (Alex), holding down a button until a certain time (Vella and Claudio), or pressing specific buttons at the right time (Michael and Chondra). Most of their special abilities follows with having a minigame as well, but I do wish there was a way to practice them, especially the ones that cost a lot of PP. Though, if you get a 0 combo, you do no damage and the game acts like the enemy dodged. Dodging also follows along as you have to get our recticle in the yellow to up your defense or in the red to dodge it completely. There are three different dodges that vary in both difficulty and the defense it gives (one gives you either, another gives you only a chance to dodge, and another only gives a chance to up defense). 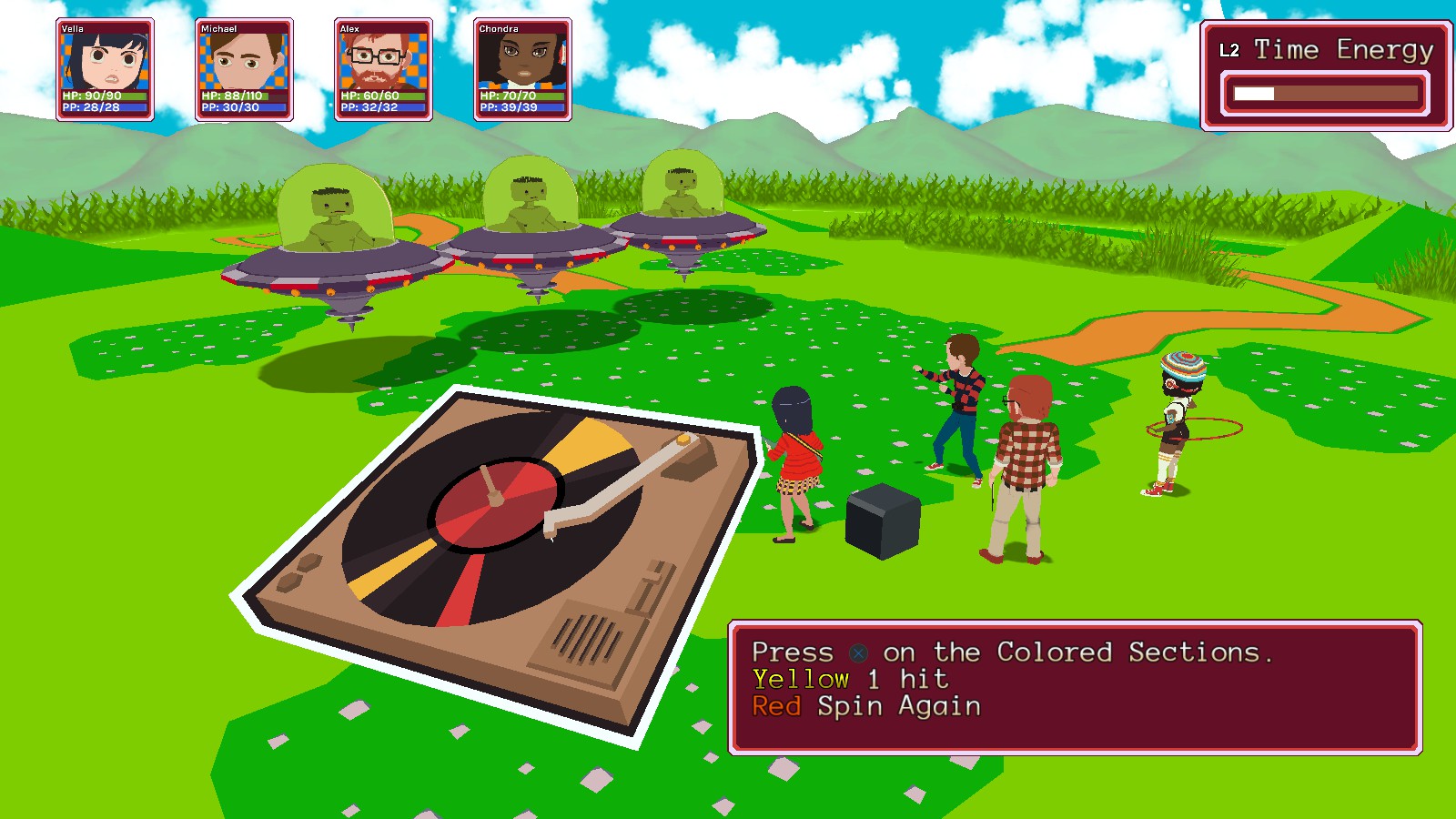 There is an assist mode to make combat easier. It utilizes an existing mechanic called Time Energy, which slows down time so you can hit the attack nodes or get the recticle in the dodge section easier. However, Time Energy depletes quickly, so you need to have great timing to make use of it. The only way to replenish it is to take damage from enemies. If you turn on assist mode, this will grant you unlimited Time Energy (just ignore the depleting bar) and you can use it all the time or only with attacks/dodges that you have trouble with. I do suggest turning it on if you’re still having trouble with a certain attack, or dodge, despite all the battles you were in. I personally used it for Alex’s attack, which I was only able to get 1 combo (2 if I was lucky) per attack. This can be abused of course, and I honestly did with the last character that joins you (and man she overpowered if you do) to make battles go faster.

I did enjoy the combat (except for Alex’s in the time I didn’t have assist mode on), but it does have a problem. The battles quickly become long, even for the basic enemies you run into. Most of it is the imbalance between the character and the enemies, the enemy’s health kept increasing but your team’s attack values barely increase (still doing 10-15 damage attacks to enemies with health in the hundreds). Despite how much the characters leveled up, they always seemed to do the same amount of damage to enemies (even to low leveled ones). It’s really obvious with Chondra as she can change her stance to increase her attack power with the consequence of losing health and/or PP, but it ended up doing the same amount of damage as if she was just using her standard stance. This is also the problem with defense as you don’t seem to be able to take less damage the higher your defense was or if you chose to defend on your turn. The good thing is, this is fixable as it just seemed like something messed up here. The amount of transitions for each action you go through (ex. Running an animation after successfully doing the minigame or telling you that Rory or the Panda Barrier is defending someone) also takes up time and you can speed it up, but I would rather have the choice to opt into not seeing them.

As you get experience from battles, this of course leads to leveling up! Instead of leveling up automatically, you have to go into the Mind Dungeon by phone (same as if you’re saving your game). Each level represents a floor in the Mind Dungeon, which contains four doors each. These doors either have a value that indicates how much a stat you selected will increase or a book that shows a new ability will unlock for one of your teammates. This leads to my favorite character (other than Vella), Marlene the crow. I love Marlene, the voice actor did a fantastic job bringing Marlene to life. Marlene is the one that guides you through leveling up, making sure you have 100 EXP and if you want, assign stats for you. Not only that, but there is a sort of story going on that Marlene leads, with a secret on the last floor. Hey, more Marlene sounds good to me.

I would make a small change if possible, instead of making you select the stat you want to increase, and then having you select again that you want to go inside the door, it’s preferrable to have you go in automatically once you select a stat. It does get tedious after a while, especially if you’re leveling up a couple times every time you enter. 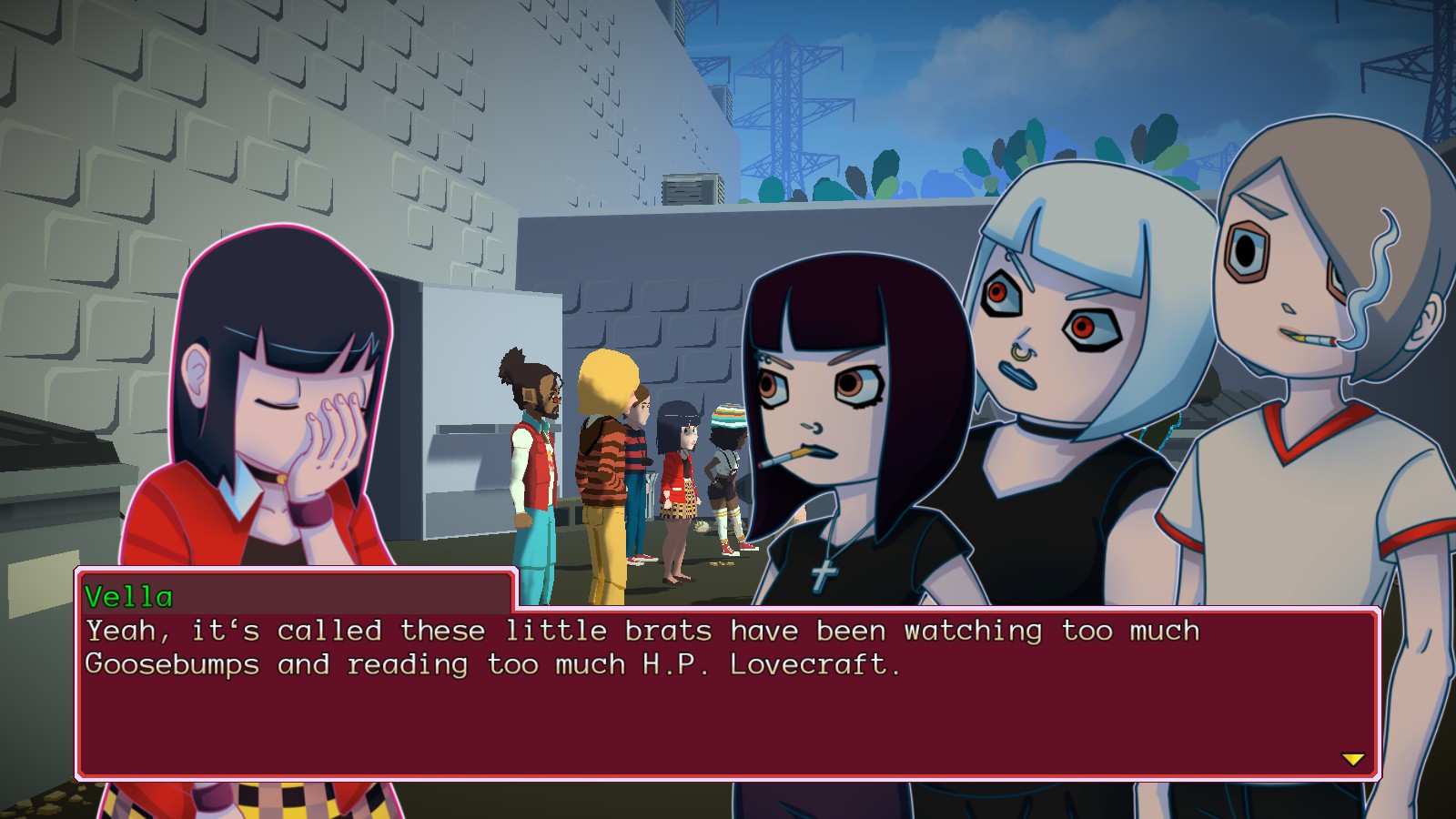 There are a couple other problems, or rather weird choices, that YIIK has. The first probably only bothers me, but there is a problem with representing the passage of time. I won’t go into much detail, but the most eye raising part is when it was around Halloween, you return from a (really cool) dungeon and learn that you were missing for 5 days. However, it turns out that a couple scenes later that it’s the day before Thanksgiving. It felt like the story really should have started later in the year rather than in April. Next, I found it weird that bosses didn’t have unique battle lines. There’s a one-off enemy that has her own unique battle dialogue, but the bosses have generic lines? I also found it weird that Vella is given a healing ability (and some other high costing abilities), but her PP was never (or barely) increased. I would have also liked an exact value on healing items rather than percentages (i.e. heals 10 health/PP instead of heals 10%).

Lastly, this one is a late game feature that feels like it could have been reworked. A month before Y2K, you’re told to train up. This brings a calendar and starts only letting you either enter the Mind Dungeon, hang out with friends, or explore outside like normal. If you explore outside, you can only do one side quest before it sends you to the next day but you can fight regular monster encounters till they stop appearing. It felt strange that this was suddenly a thing and could have been done as a “point of no return” type deal, reworking it so side quests appear periodically, rather than having three and then suddenly getting ten. The interactions you have when choosing to hang out with friends is a little trickier though. 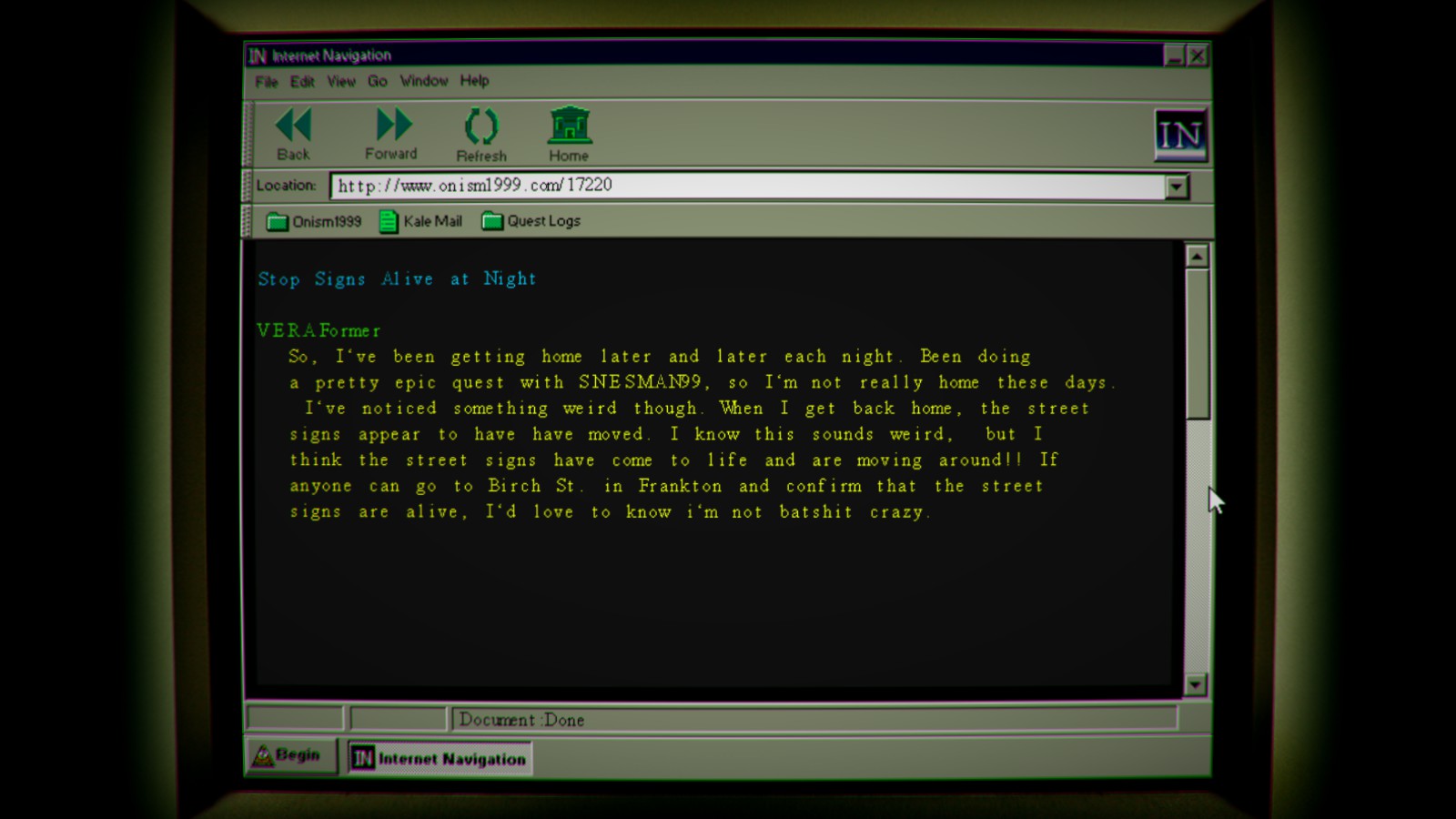 Before I forget, the side quests could have been displayed better. You get them on ONISM1999 when you’re reading posts and they’re labeled with a fire icon. The thing is, it’s not obvious that the fire icons meant that it was a side quest and I only found out after accidentally completing one. I also found myself wishing that there was a log for the side quests so you won’t have to keep logging into the computer. There was also a (late game) side quest that involves hanging posters around, but it won’t register as complete if you don’t do it the same day you got it.

YIIK: A Postmodern RPG is a hard one. It has great music (and made a really good decision to swap out battle songs), good voice acting, nice art, had an interesting story (that honestly kept me playing), and great dungeons that get better as you go on, but it has a lot of rough edges. Like Rory’s and some of Alex’s voice lines seeming muffled (or a touch echoey? Not sure how to describe it), stats that doesn’t seem to do anything, an insufferable main character (and monologues that got a touch annoying), along with cringy lines of dialogue. The combat system felt like was could be good or bad depending on your gaming preference as one person could enjoy doing mini-games while someone else would find it annoying.

Despite my complaints, I was able to look past them and did enjoy playing YIIK as it soon became one of those games where I started playing in the afternoon and suddenly it’s 3am the next morning. However, I only recommend it to people who don’t mind the mini-games, slow combat, and are able to look past the insufferable main character that is Alex. 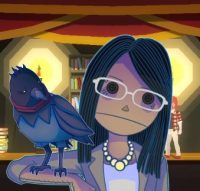