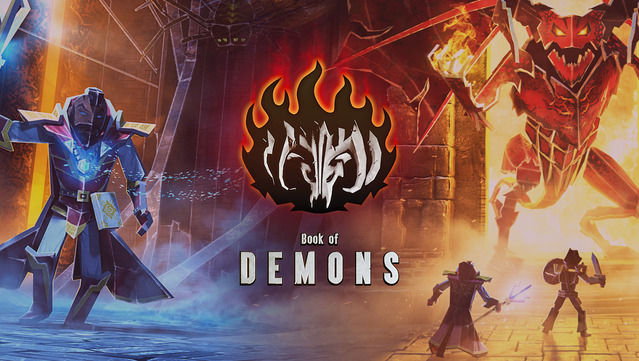 Deck building meets roguelite dungeon crawler, what’s not to like?

Book of Demons is a special experience. It tries to mix several different systems to add some freshness to the formula of similar games.  This group of systems work quite well together and allow for a relatively unique experience, but I must admit I don’t really want to relive/replay them. This isn’t to say the game is bad… in fact, I will give it a good rating because of how everything just mixes together quite well and thus allows for a great playthrough. Sadly, it has a few issues (in the all-important gameplay department) that prevent me from saying it’s extremely replayable like some other games of the same genre.

One thing to also add is that the game has a few features that make it fantastic for those looking for a quick casual experience and want to play a bit before getting back to work or while they have their lunch cooking.

The story is very plain and is by far the least important aspect of the game. You are an *insert class here* (which I’ll address later) that returns to his old village, which has been overrun by magical creatures: giants, shamans, skeletons, zombies, gargoyles, hell scorpions and many more. Your task is to free it from the archdemon, which is below the town in the depths of hell.

There’s no plot to speak of except for this premise which works as some sort of motivation, while the rest is driven by the gameplay. It’s also worth noting that you’ll find a few characters (I guess you can call them survivors) that will help you in your quest.  These serve as gameplay enhancers (basically your upgrades). Townsfolk (and later an Angel) will accompany you and also Gossip a bit, telling you a bit of backstory which I felt was cliché and generic. It makes the game feel like it just took a class in Generic Fantasy Lore 101 and called it a day.

The gameplay is the biggest component of the game and it is both its strongest and weakest point. The positives involve the depth as the game has a TON of mechanics and combos to look out for, so many that I honestly can’t even remember them all. Elements like poison, fire, and freeze/ice will affect you with various debuffs, and the same goes for the enemies that you attack with elemental modifiers.  Enemies will possess different modifiers like blowing in a poison cloud or ice element enemies taking more damage from fire abilities while others will have armor which needs to be interacted with to remove and only then can you attack them. There’s a lot more of these little systems and mechanics that urge you to pay attention to everything happening on your screen.

The armor system I described above is one of the most interesting features of the gameplay actually, alongside other UI/interactive systems that are needed to get past the combat. In more detail, enemies with armor with have a big shield icon on them which needs to be repeatedly clicked in order to be destroyed before the said enemy can start taking damage. You can also cancel enemy abilities (or the ones that need to be channeled, should I say) by clicking on the ability’s channel icon above the caster’s head in order to cancel it. Other systems involve you needing to click fountains, chests, bookshelves, etc. to regain your health or simply to get loot. Another curious mechanic is the stun: when stunned, your screen gets darker and a few stars will start dancing around your screen quite fast.  You will need to catch them all with your mouse in order to remove the stun.

… I never thought osu! would come back to haunt me.

Anyway, all this serves to describe some unique ideas the game has to keep it fresh (there are at least a couple more) and these allow the gameplay to move forward without feeling boring. The dungeons are also replayable for harder versions of themselves for increased rewards and loot, which always motivates further playthroughs.

Which… still happens, sadly. This is the game’s biggest problem: the combat itself. The fact that the whole of the combat is based on pure clicking and holding on an enemy until he’s dead already sounds rather annoying after a few hours… but this problem extends further when the game works as a sort of tabletop game in the sense that you cannot freely move around its procedurally generated dungeons (which do look beautiful). What the game has is the dungeon and inside of it is a single road/pathway which you can move forward or backward in (and in case the dungeon extends to a certain side, you can turn that way and repeat the procedure) and nothing more. You can circle around a certain area and you have nearly zero freedom in the movement, which makes the game feel extremely limited in its exploration aspect and completely kills off any interest or motivation to complete each dungeon 100%, by collecting all the chest items and killing every enemy.

This is my feeling with the gameplay. Some people will surely enjoy how it works and, to the game’s credit, it does feel very unique and complete in general. The feedback you have from every single interaction is absolutely remarkable: from the interactive mechanics I described above to the fact that if a certain pathway in the dungeon is completed, that pathway is lit up with golden footsteps to illustrate that there’s nothing else to explore there.  The map is excellent with its rather linear design and how it shows you where you’re allowed to move. 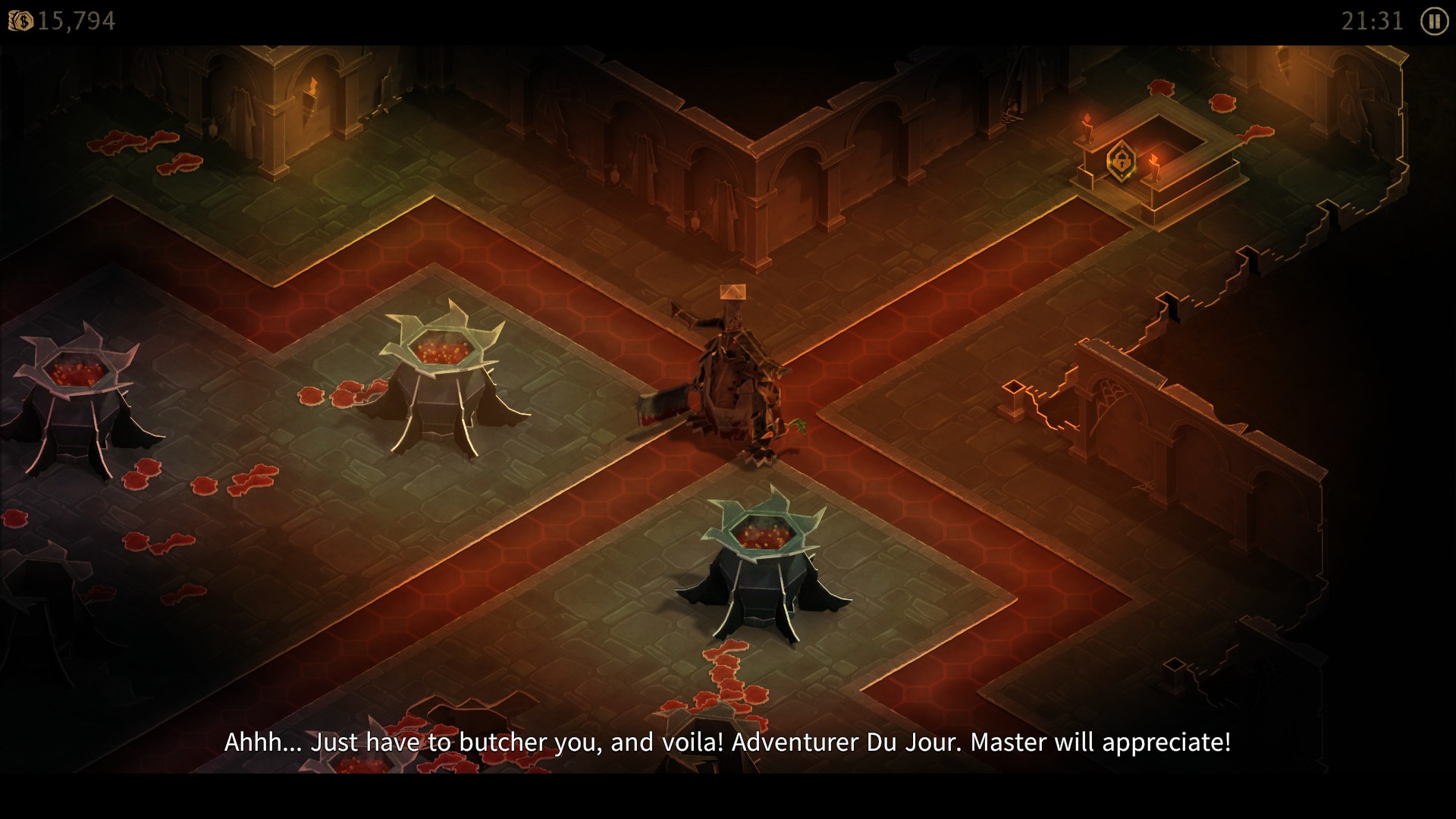 And here you can witness a good homage to the Butcher from Diablo.

Book of Demons also has a deck building system as it proudly mentions, and it does it quite well for the style of game. The cards work as a sort of perks/skills. You’ll have your sustained skills (passives that take a percentage of your max mana until you remove them), examples of which would be stuff like “ranged attacks have a 70% chance of missing” (this one is quite mid-endgame and obviously costs a lot of mana), others involve health and mana regeneration, an extra attack is randomly cast of a nearby enemy, etc.
Activatable cards are present and work like your typical skills: they cost mana and usually have an animation attached that returns a debuff or damage to the enemy. Stuff like a whirlwind slash that damages all nearby enemies, a massive stuff AoE, etc.

All these are really fun to collect, upgrade (which can be done in the town) and do builds with (I did by the end a 50/50 with enhanced armor/missed attack chances and some health regen cards and I was virtually unstoppable as I regained most of my health when taking damage), which really motivate its replayability…

…if you can get past the problems I stated with the gameplay.

It’s also worth noting is the presence of 3 different classes in the game; besides the starting warrior (fighting in hell below), you also have the choice of the Ranger/Rogue class and a Mage, both of which can be unlocked once your Warrior reaches level 5 (which is roughly an hour of play). 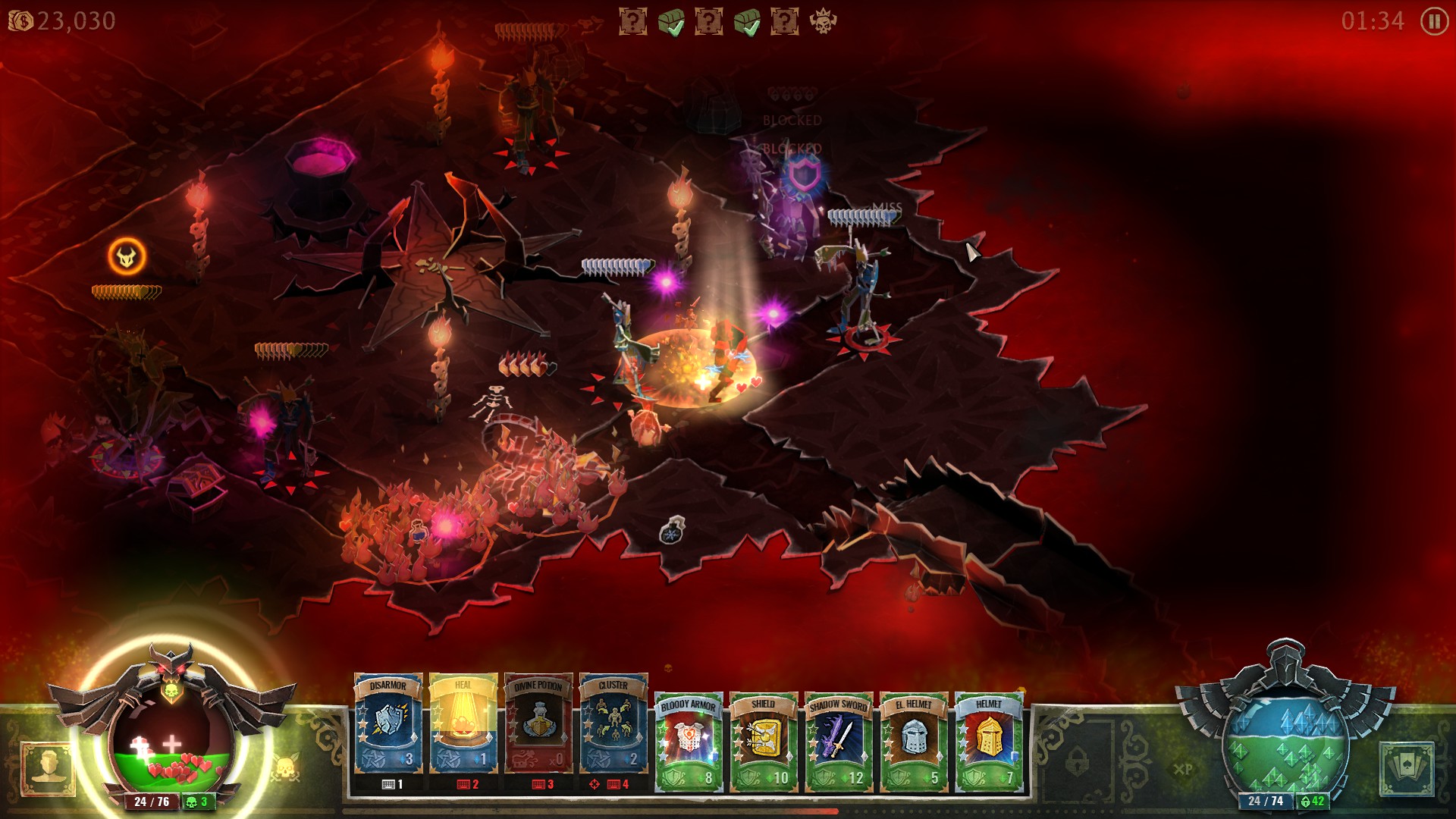 To conclude, I’ll expound on my claim about the game’s appeal to casuals. The game is structured like a vertical overall map that represents your progress. The deeper you go, the more areas, enemies, and bosses are unlocked until you go to hell at the bottom (and final) stage. Think of Spelunky or Steamworld Dig, where you need to delve deeper and deeper, except here it doesn’t do it in real time, it does so in phases, i.e when you complete a dungeon you get further down (and you basically progress through the campaign). With this, you have subsections that represent a “level” which have various dungeons you need to clear. These levels have a length according to the time you allow them to have! It’s not dynamic like you might think, it uses a system called Flexiscope that gives you various “length options” that you can give your level. This allows for you, in a rush, to pick a 7-minute flexiscope size for the level, giving you a medium and a small dungeon, which the game randomly generates and balances before presenting it for you to play. About seven minutes later, you’re done and can go to work without being late and getting your ass yelled at.

The greatest charm of the game is the aesthetic and the art style: it’s very nice. The game uses a papercut style for just about everything. Your character, enemies, etc. all jump around like the paper cut-out characters they are, it almost feels like a tabletop game but plastic was too expensive. It has unbelievably high levels of charm to it. It looks really, really good and not cheap…

…yes, a game about paper cut-outs hurting each other that doesn’t look cheap. Oh, the irony.

Jokes aside, I really like the art style and overall look of the game, I really cannot praise it enough. Another great part of the game is the UI, which is extremely clean and enjoyable to use/navigate around, with no glaring issues worth noting. You can see below the character tab and a conversation with one of the townsfolks that I engaged on purpose at the same time to show the most of the UI. 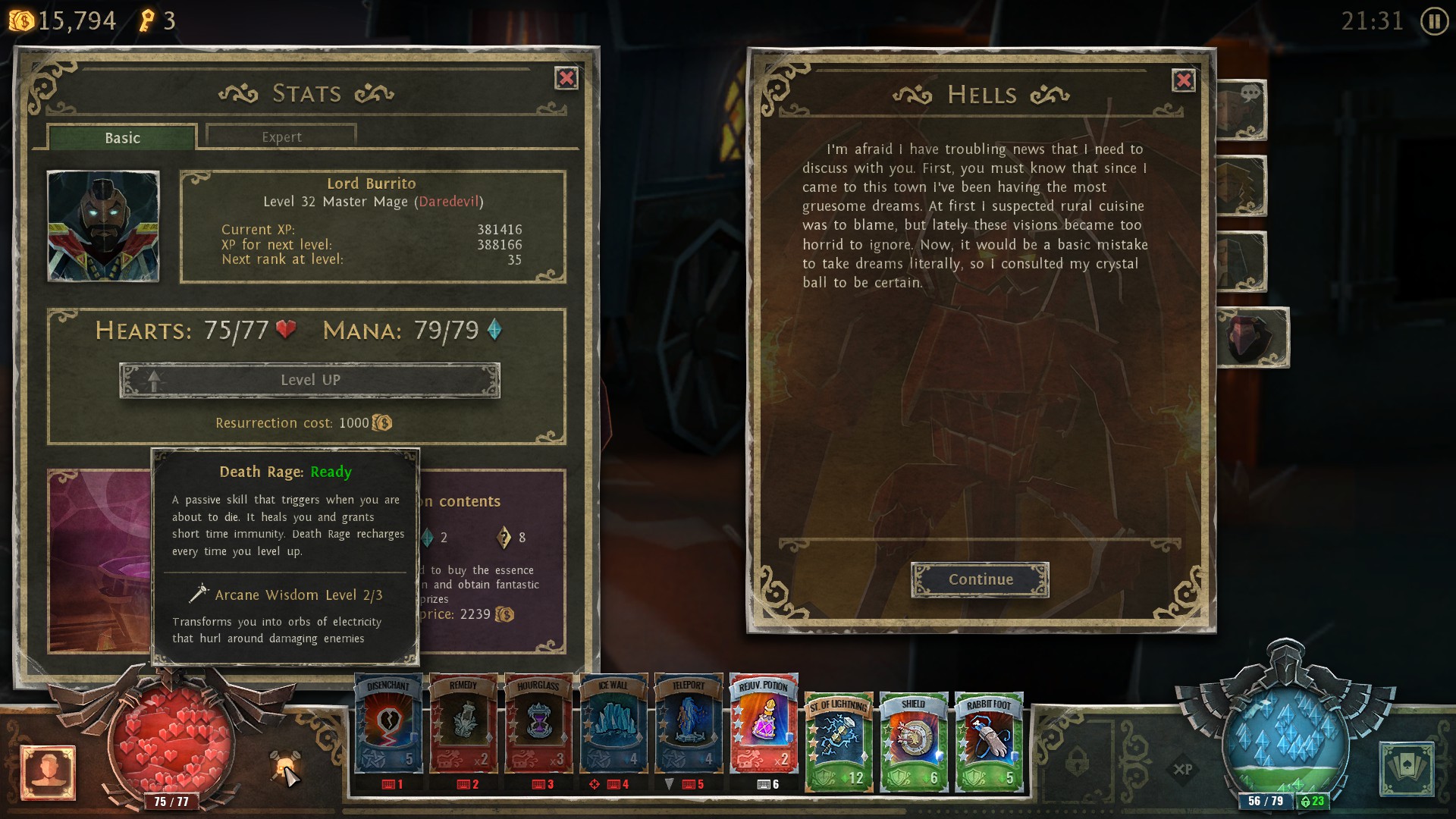 As for the audio, it’s worth mentioning the surprising presence of dialogue, AND IT’S ACTUALLY GREAT! Seriously, many indie games would benefit from not having any voice acting instead of adding it at the last minute, but the voice acting here is so good that my jaw literally dropped. Book of Demons‘ voice acting is absolutely enjoyable to listen to.

Another thing worth mentioning is that the music and ambient score set the theme just right. It feels sort of medieval mixed with a hint of exploring the unknown and it sounds really appropriate for the game. The combat could use some more powerful music, but aside from that, the OST is definitely something that stands out well.

Book of Demons is a good game and it has extraordinary attention to detail that I never expected to encounter. Its mechanics make it feel rather deep in the gameplay department and it absolutely oozes charm from every pixel it renders with its great art style and good (albeit cliché) writing. It’s definitely something I will say most fans of roguelite games and dungeon crawlers will enjoy.  Heck, even people wishing for a twist in their Card Collecting/Deck Building games should give it a shot.

It has more than enough content to satisfy the asking price, it’s just a matter of enjoying the gameplay as it can be quite repetitive sometimes to the point that I honestly couldn’t get motivated enough to replay it. That’s a really big deal, personally, for games like this and because of that I’ll have to give it a bit of a lower score than you might expect.