A New Challenger enters the ring! A small team from Chile is bringing their fighting game based around horror monsters such as vampires, werewolves and more to the PS4.

A battle between monsters, angels and other creatures of mythology

In Omen of Sorrow, you can fight with characters that resemble well-known monsters such as Dracula or Frankenstein, although they are represented here under alternative names. Other choices are Gargoyles, Nephilims, Angels, Quasimodo (yes, THAT Quasimodo) and several others that allow you duke it out monster to monster. The game is most likely inspired by other fighting games such as King of Fighters XIII, where the mechanics, in particular, are quite similar. Visually it reminds one of NRS games such as Mortal Kombat. Though make no mistake, the developers do bring their own spin to it and it does feel like its own thing.

Due to circumstances, my fellow SoQ colleague Hovermask did the testing for the online portion and did a write-up immediately after. 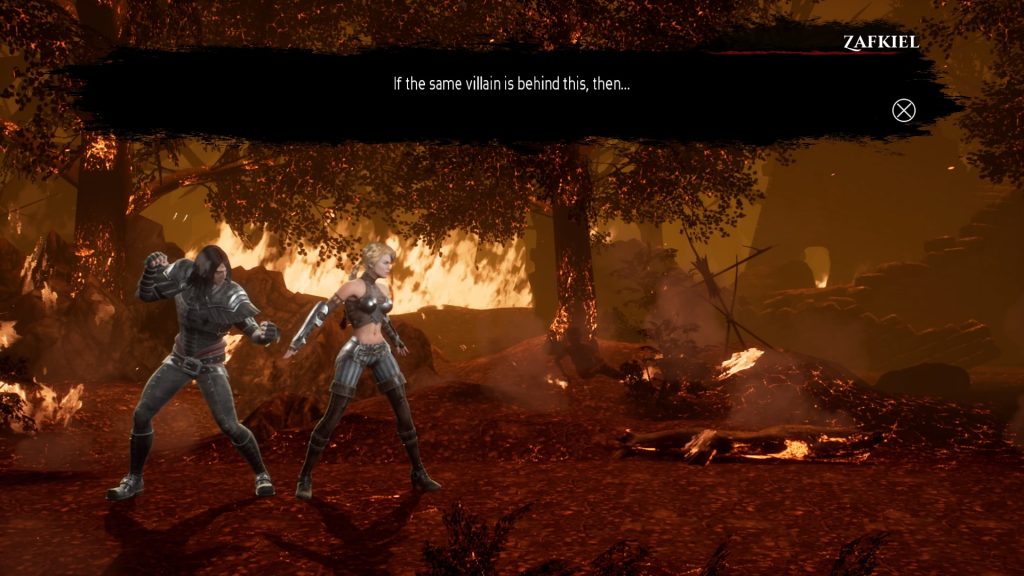 The story is split into three parts, though you need to finish the first one before getting access to the two other. The main story is about characters trying to prevent the end of the world which originates from a dangerous book. The additional two storylines tend to be more or less prologue stories before the main plotline which adds more information to the side characters. The story is completely told with an in-game 2D view, which are short parts with narration and fighting.

It sounds simple, but I’m a little perplexed about it being so disjointed. The pieces with narration feel out of place and more of a mood maker. It doesn’t help that those parts are just a camera going through different angles of all kinds of things. The story flow itself is kind of weird because there are sudden jumps in time without notice, making it hard to follow. A majority of the characters lack information, making it hard to keep up with their lore. I have no doubt that the developers tried their best, but unfortunately, most of the execution of the story has missed its mark. I’m also unsure if it was just me, but the load times felt quite long when going from one scene to another. Nevertheless, it should offer a few hours of content.

– Story
Split into three parts, each having a set of characters and fixed story.

– Versus
Play against other players locally 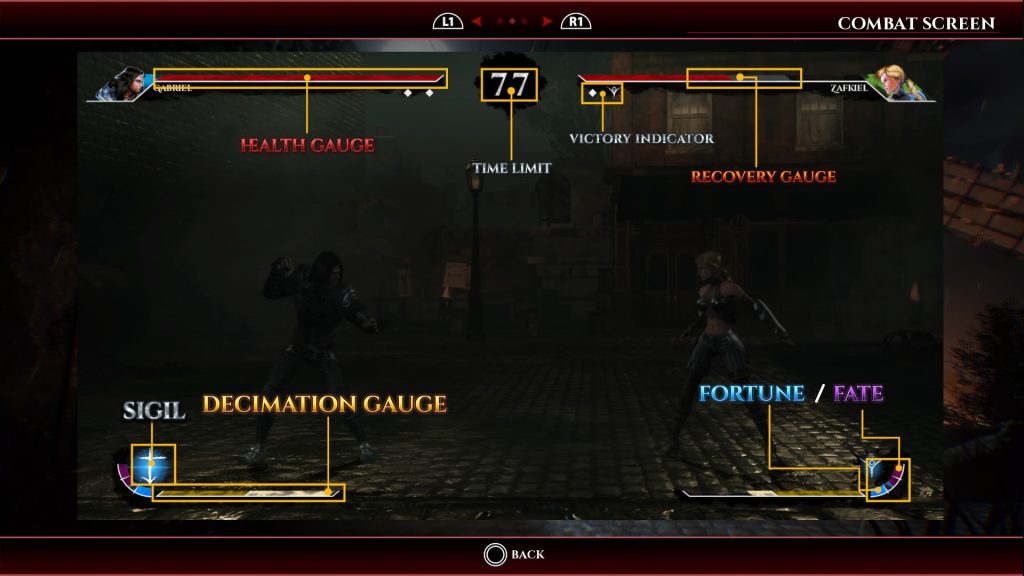 A short tutorial provided in pictures with descriptions about the games system mechanics.

Training
Typical training mode. Unfortunately, it lacks quite a few options such as choosing stages, recording actions and replay, Sigil options and the restart function is frankly speaking too slow. 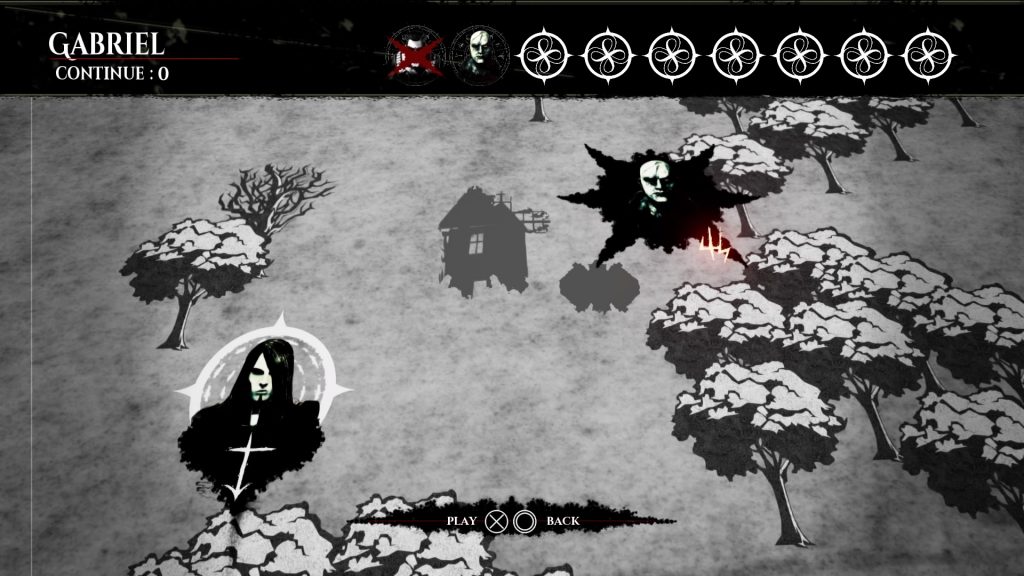 Fight through eight opponents and, under certain circumstances, you can even unlock two additional characters. Fight till you run out of life

Before delving into my experience with actual online matches, let’s take a moment to look into the matchmaking process. For both quick matches and ranked matches, there is no network filter setting of any kind to found. This is a bit surprising since the ability to set up constraints for a better online experience is usually standard protocol for the majority of modern fighting games. Selecting one of the modes will take the player straight to the matchmaking system in where you will either be matched with an opposing player or no one. You are unable to see your opponent’s connection strength as the network indicator does not exist, and matches cannot be declined. Unfortunately, I cannot ascertain if the lobby works the same way due to the fact that I was not able to find any player lobbies during any of the sessions.

The online component of Omen of Sorrow is a tough one to give a verdict on. It is hard to form a solid opinion when you were not able to find as many matches as you would like because the matchmaking was unable to find me more. The experience was mostly split. The first half had a lot of frame skips resulting in a teleport effect which made it extremely difficult to block, even more so against fast characters with air mobility like Radegonda. Performing anti-airs for these matches was an impossibility. With my second session, the overall performance was decent but by the time I had an opportunity to revisit the game, about a week after release, the populace seemed to have died down. I attempted approximately 30 searches and was only able to get 5 matches which ran just fine with no issues. However, do keep in mind that the sample size, the total number of matches, is rather small so these few good matches that I had may not represent the actual current online state. Then there is also a question of the population health to consider.

Gallery
As you play the game, gallery arwork gets unlocked. 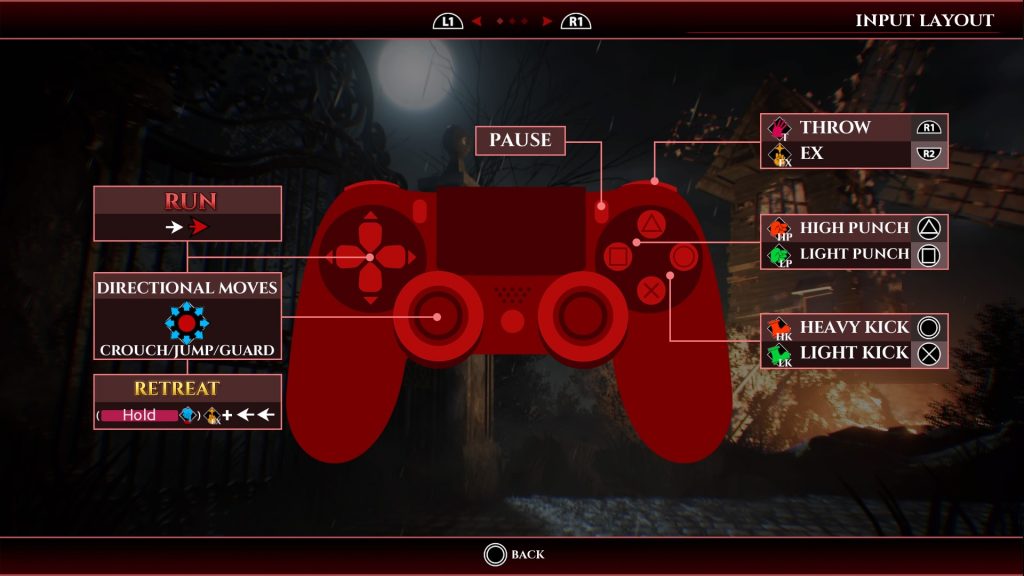 When I mentioned King of Fighters, in the beginning, it was no coincidence. The game uses a 4-button attack layout like KoF with 2 strengths of punches and 2 strengths of kicks. Plus a button for throw and EX/Special button.
Blocking is done by holding back. Dashing is double tap direction like the established standard. There is also a run mechanic you can activate by holding the direction after the second tap after the dash. Runs do not stop immediately and require a little bit of time for recovery. In addition to that, it functions more like a stance and does different attacks compared to standing.

This is where fighting games and Omen of Sorrow shine. There are quite a few System Mechanics to go through in order to give an overview of the general gameplay.

Unlike other standard fighting games, the Life Gauge has recoverable life. You start the regeneration process by attacking. 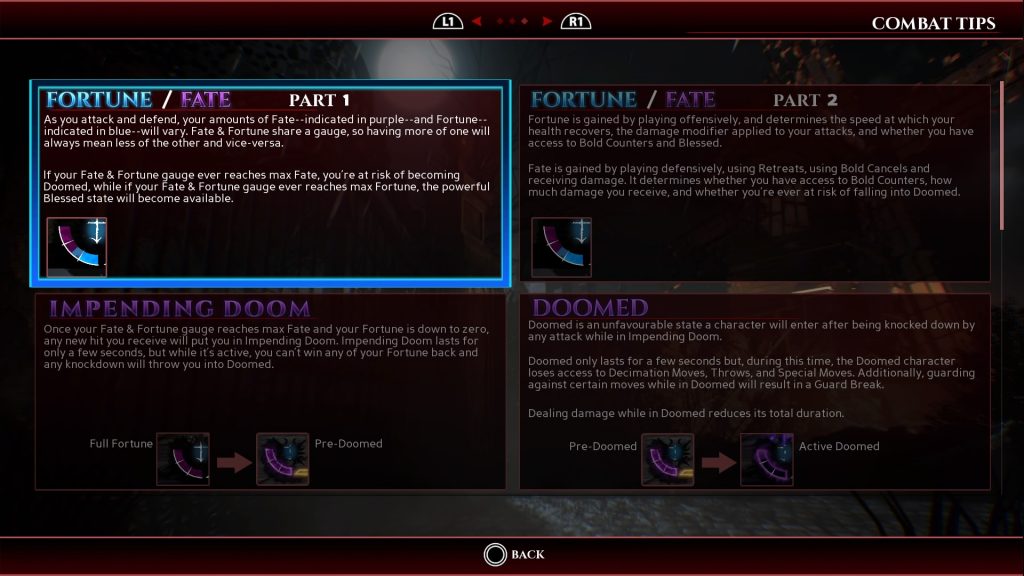 The gauge consists of three parts and moves in either direction depending on whether your actions are offense or defense based. When it reaches fortune you can activate the blessing state. On the other hand, if you reach fate, you’re running into the danger of the Doom state after the next knockdown. It also increases your damage the more Fortune you accumulate.

– Doomed
This is a dangerous state that weakens your block by making certain moves crushing your block and leaving you open for further attacks. Some attacks become virtually unblockable as long as you are in Doom state.

– Blessed (Activated by pushing EX twice)
Blessed puts your character into a timed buffed state, where Bold Cancels cost only a fraction of what they normally cost until it runs out.

– Bold Cancel (Depletes 2 Fortune)
Cancel a move into a special move or run that usually cannot be canceled. Useful for either continued pressure, making things safe or increasing damage by adding another attack.

– Bold Counter (Depletes 2 Fortune and recovers 1 by successful hit)
Free yourself with an invincible attack while blocking.

– Retreat (Depletes 1 Fortune)
Move backward with invincibility, but beware once you’re at the end of your move you will be open to attacks.

A multi-purpose resource that fills up while fighting. Can be used to escape Doom state, activate Blessing at below 3 Fortune or to use any of the decimation attacks.

– EX Attacks (Depletion of Decimation varies)
By using the EX button you can activate a stronger version of special moves. 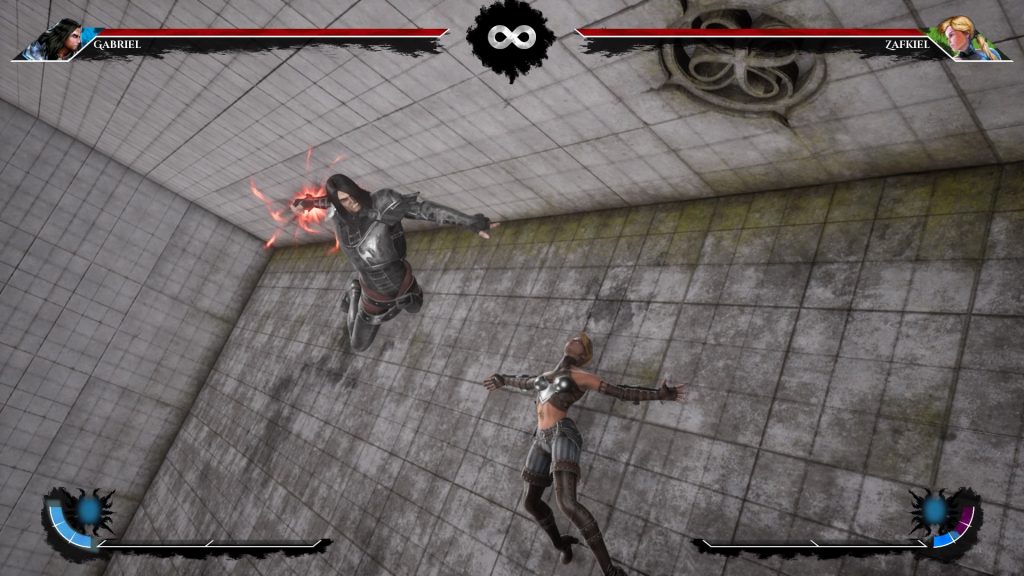 – Lvl. 1
Strong attacks or attacks that have special properties.

– Lvl. 2
Cinematic attacks that deal a huge amount of damage. When put into a combo, can take away easily 50% life or more.

Despite its inspirations, the game has its own feel of gameplay. The Fortune/Fate-Gauge encourages a more offense-heavy play by rewarding offense with Fortune and punishing defense with Fate. Once the latter runs full, your defensive capabilities are heavily reduced and even blocking is no longer a real option. The mechanics tied to the Fortune/Fate-Gauge increases the need for resource management, making it a challenge of timing on when and what to use. The Decimation gauge also has multiple purposes left for the player to juggle, EX-Attacks can help under certain circumstances, lvl. 1 Decimation Attacks can have all kinds of purposes and lvl 2 offers a humungous amount of damage. On top of those two resources, the Sigil is like a joker resource and most likely even the strongest resource within the game, purely because it’s close to being an all-purpose resource.

Movement can feel a little weird at the beginning due to the dash/run mechanic and jumps are quite fast too. Combos are mostly kept quite short and heavily damaging for the most part outside of Blessing. I’m not too sure if the latter applies to all character, because there are also a few quirky ones that need more time to optimize their play. So far, the gameplay seems solid and has its charms. Though as with every other fighting game it will take time before people are able to flesh out the details.

Omen of Sorrow is nothing spectacular in terms of graphics or sound. The backgrounds, character design, and music fit well together within the monster theme. The cinematic lvl. 2 Decimation Attacks are the best-looking part of the game. Overall, it looks like a less polished NRS game. The emphasis is on looks.

According to the developers, they are planning to keep supporting the game. It’s unknown how the support will look like outside of hotfixes.

Omen of Sorrow is a solid game. The story mode is well meant but falls a little bit flat in execution. The lack of playable tutorials and combo challenges also hurt the game a little bit, leaving casual players to their own devices. The gameplay seems solid and frankly speaking it is more of a subjective thing, but it’s also where they succeeded the most. The most likely biggest hurdle for the game is its price of 50$/€. As it is a very competitive market, it just can’t stack up to the other games of its ilk in its price class. It’s a new and small team and fighting games are not cheap to make so I can understand its pricing. Unfortunately, I can’t review it in a vacuum and can only recommend people to take a good look at the game and with luck, it might be the game you are looking for. Otherwise, those who are unsure should wait for a sale before jumping in.