Big Day is an isometric shooter with a focus on loot where you play as Pancho, just another random guy caught in the middle of yet another zombie outbreak whose only goal is to be reunited with his daughter.

The story isn’t typically the main focus of shooters like this, and Big Day is no exception. Still, there’s a reasonable enough effort to try and provide some sort of plot to sustain and make sense of all the zombie killing going on. As usual, zombies don’t come out of nowhere, and soon enough you start to grasp some sort of conspiracy across the globe. There is a surprising amount of dialogue for a game like this, but the English translation does leave quite a lot to be desired, even if I still understood perfectly what the game was trying to tell me.

The game is pretty simple through and through, and if you’re into top-down/twin-stick shooters this will not feel strange to you at all, even if the game does attempt to bring a breath of fresh air into the genre. Each mission boils down to the very same thing, get in, kill everything on your way to the exit, leave, rinse and repeat. When killed, enemies can drop these briefcases that can contain money or, upon completing the level, will reveal pieces of equipment inside them. These cannot only be all sorts of weapons, like assault rifles, semi-automatic rifles, shotguns, heavy machine guns, etc.), but they can also be backpacks, shoes, gloves, and vests, all of which alter the stats of your character on one way or another. With that said, apart from the weapons themselves, the other items don’t alter the way your character looks, which is somewhat of a downer. 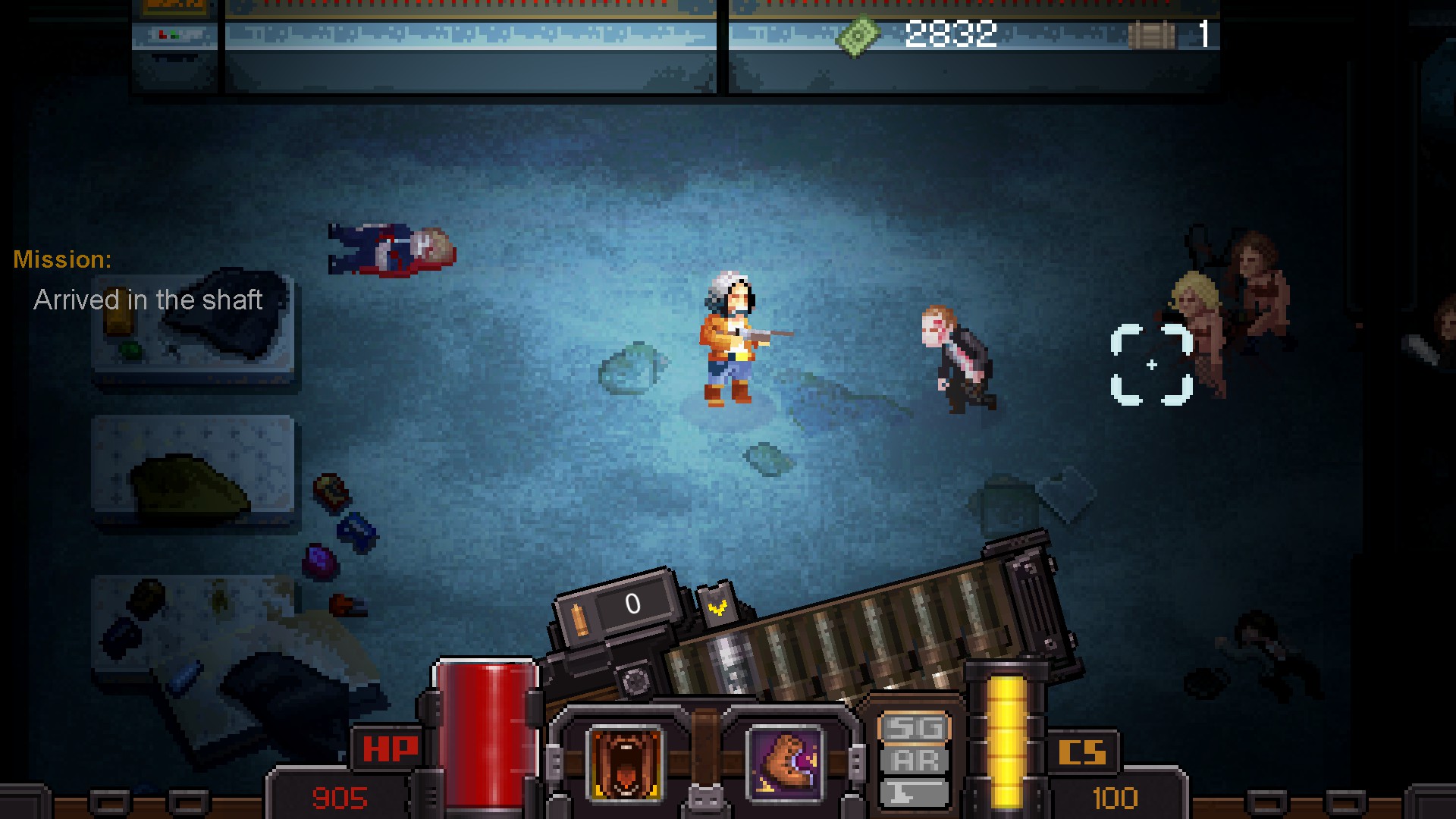 Upon completing each mission, you’ll be transported to the world map, where you can drive around and go to other locations. However exciting that might have sounded, this really serves no real purpose other than selecting where you want to go next, unless the developers have something else planned for this section further down the line. From the world map you can also set up camp, which allows you to equip other weapons and pieces of gear, but you can also sell those that you no longer want. Besides that, once you reach level 10, you can also progress through the skill tree by acquiring passive upgrades, like increased critical hit chance, more health points, etc., nothing particularly fancy or exciting.

As of right now, I think there is only one ability in the game that Pancho can use (besides performing a dodge roll), which is some sort of war cry that seems to damage enemies around you. This consumes power, which can only be restored if you manage to pick the little bullets that enemies drop. However, power is also consumed everytime you reload by simply pressing the reload button. There is, however, a way to execute a “perfect reload”, which is by mastering and perfectly executing this reload mini-game. This is essentially a timing based button press that you must perform in order to successfully reload. If you fail to hit the reload button at the right time you have to try again. I’m not really sure how I feel about this whole “perfect reload” thing, because even if it does make combat a little more hectic and challenging, there are a few occasions where you’re trying to avoid projectiles in a bullet-hell fashion that doing both things at the same time can be almost impossible. 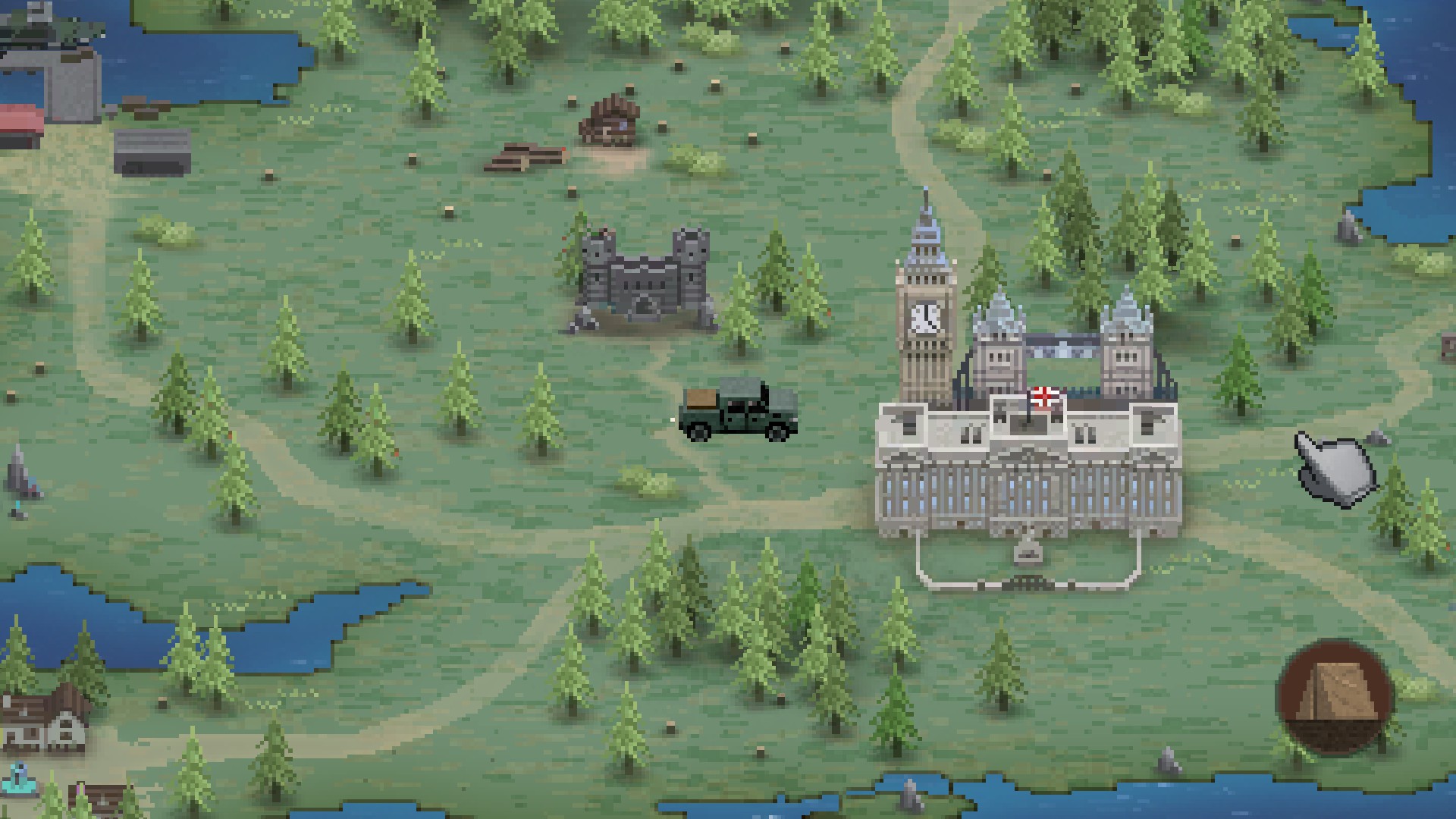 Each area of the game presents you with a new world map region for you to explore, and they come with some extra locations. The first zone showcases a place where you can augment and customize your weapons, while the second one allows you to fight in an arena that keeps changing every round, attempting to survive for as many rounds as you can in order to rack up some rewards and compete for a place on the leaderboards. Other than that, levels are pretty linear, you go in, you get out, simple. It’s worth pointing out that there are no checkpoints, if you die you have to start the level all over again and you lose everything that you had picked up until then, but thankfully each level is relatively short (about 15 minutes or so). However, whenever there’s a boss fight, I must admit that it is rather infuriating having to run through the level all over again if you happen to die during the fight.

With that in mind, one of the biggest issues that I have with this game is having to fire at enemies when they’re not showing up on the screen, either because they’re off the screen borders or because they’re behind some a building or wall texture that the game doesn’t make transparent. On top of that, a lot of fast-moving enemies also tend to prove difficult to deal with in tight spots, because one second they’re not showing up on the screen, and on the next second they’re already on top of you, and this is mainly due to the small area in your field of view. The boss fights also suffer a great deal thanks to this, because the bosses tend to be able to attack you while being outside your viewing range, which not only makes them quite difficult to hit but also to dodge. 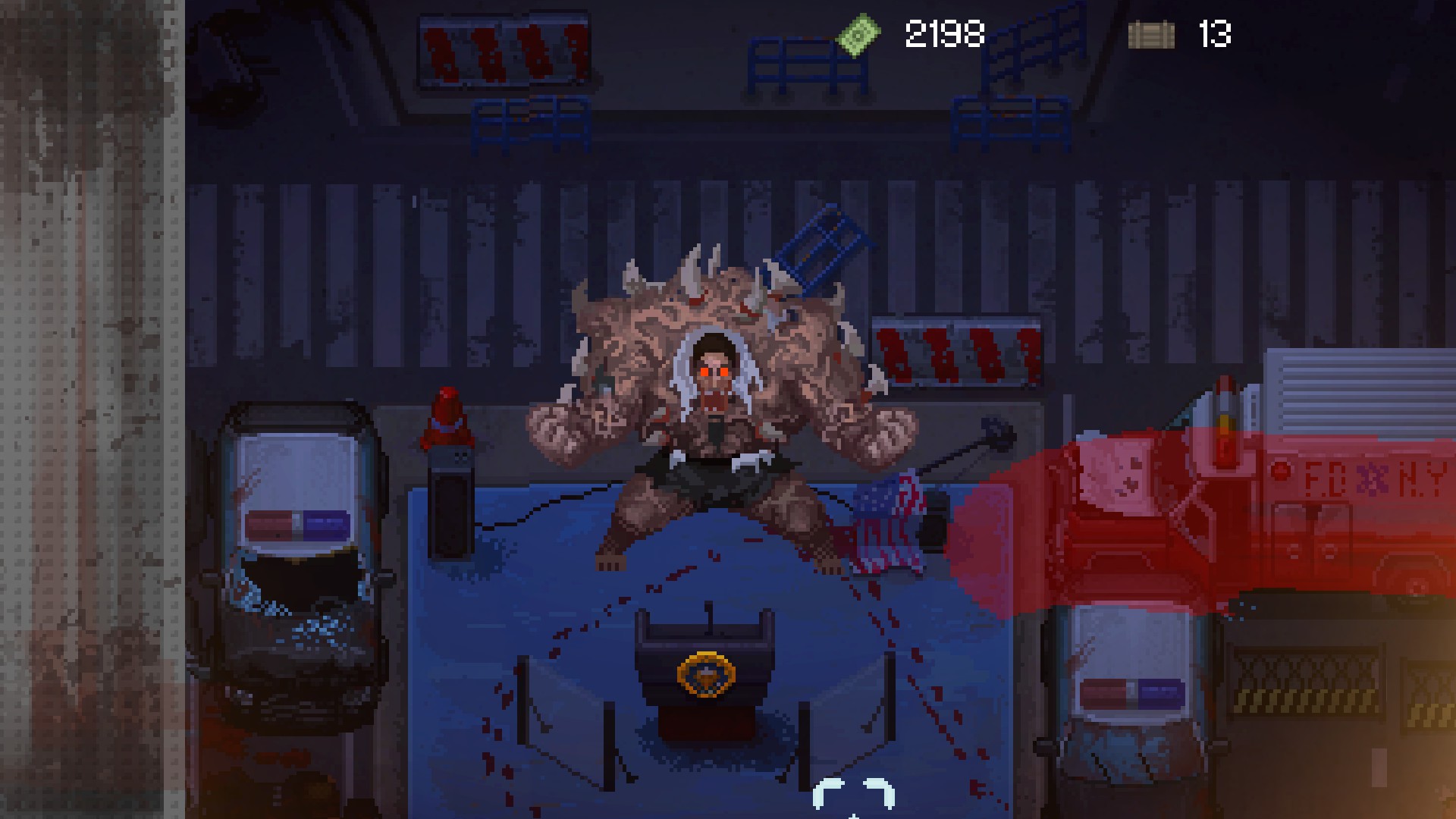 On a more technical side of things, there’s a whole other issue entirely. The need for a constant internet connection in a single-player game. If you were looking for something lightweight to play on your laptop when you’re not connected to the internet or something along those lines, I’m afraid you’ll have to look elsewhere. Honestly I have no idea why the game needs to be played online, but I’ve had times where I was trying to upgrade weapons or sell some and I’d just get an error saying that “The survivor base is a little busy”, which I assume is a wordplay on server connection issues, thus rendering the whole inventory and weapon management completely useless. When this happened, I would get stuck on the weapons screen and couldn’t exit the game properly, as the only way to exit and save your game is by going into your camp, opening the settings menu, and then choose the option to “Logout”.

While I feel like we’ve had more than our due share of pixel art over the last few years, I’m always excited to see when some games manage to stand out from the crowd, and I certainly feel like that is the case here. Even though some parts of the game can look rather bleak, and with some rather muted colors, for the most part, different locations stand out on their own, and different enemy types are easy to distinguish in the midst of the zombie swarms that are always going after you. With that in mind, I think that this is mostly due to how well the pixel art is done and implemented, because while you can still identify different pixels on the screen, there is still a lot of detail in each frame, as pieces of clothing and other tiny particularities were carefully animated. 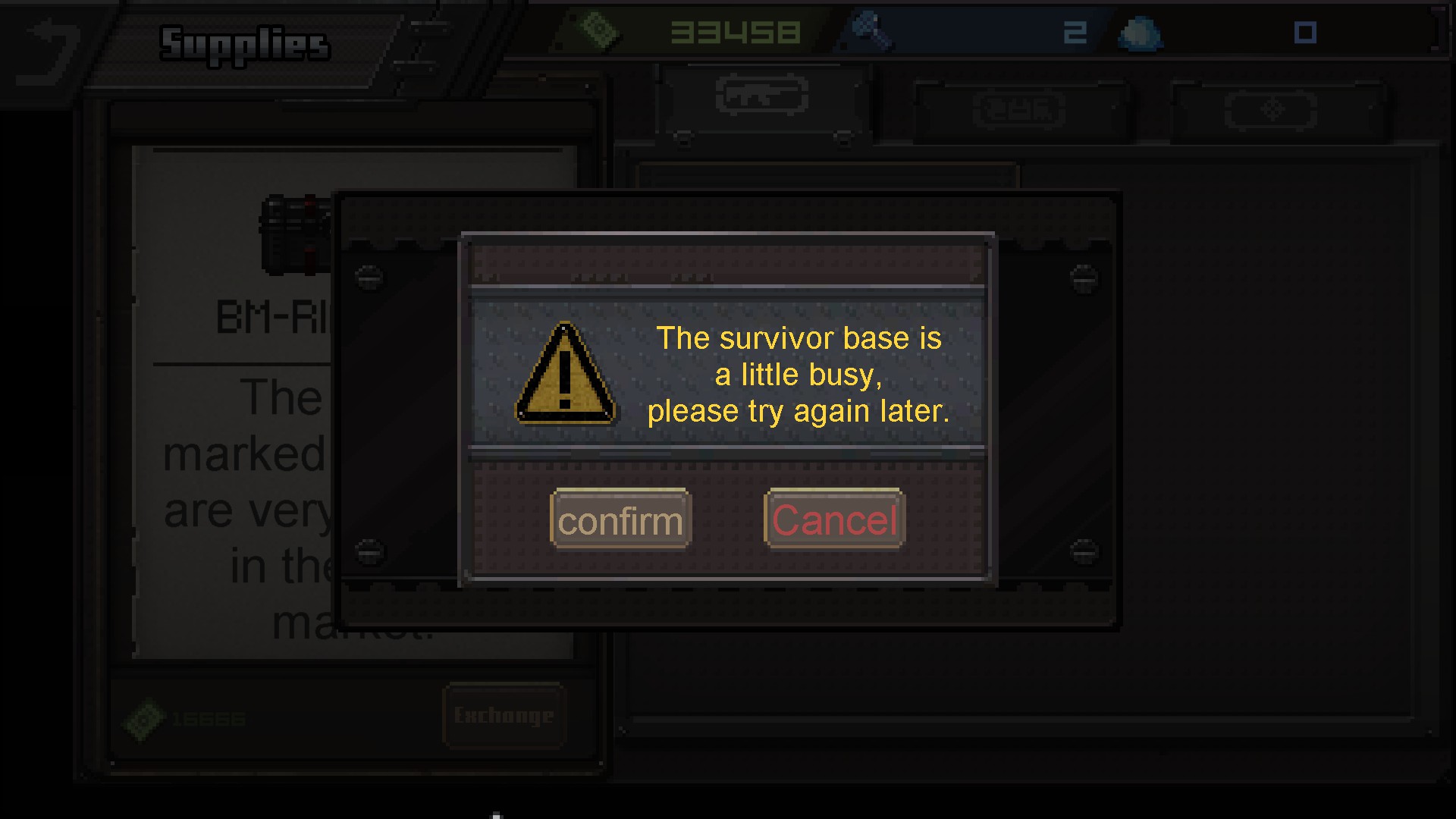 At the end of the day, for a game that’s pretty much all about the shooting and the loot, it fails to really stand out in both of those aspects. While shooting might not be the worst out there, and while the different weapons still sound quite nice, ultimately, there’s nothing particularly unique or satisfying about the whole package. As for enemy variety, it’s decent enough, but it’s often obfuscated by how quick you can kill enemies.

The server-side issues were actually what made me stop playing the last time I booted the game, as I just got fed up with that because I had lost yet another hour or so of progress. Nonetheless, Big Day it’s a decent game for what it is, but I personally wouldn’t recommend it because there are other games in the genre that provide a much better experience, even if they might be a tiny bit more expensive.