The long-awaited sequel to 60 Seconds! is finally here, and now you get to play as survivors of a nuclear holocaust in space.

60 Parsecs! is the long-awaited sequel to 60 Seconds!, which was released back in 2015 by Robot Gentleman. The sequel shares a lot of similarities with its predecessor in terms of gameplay mechanics, and those that are familiar with the previous game might even say that this is just a reskin. In truth, it feels like, while the core of the game is still very much the same, the derivative setting and the narrative elements should still provide a nice change of pace for those that are just looking for more of the same. 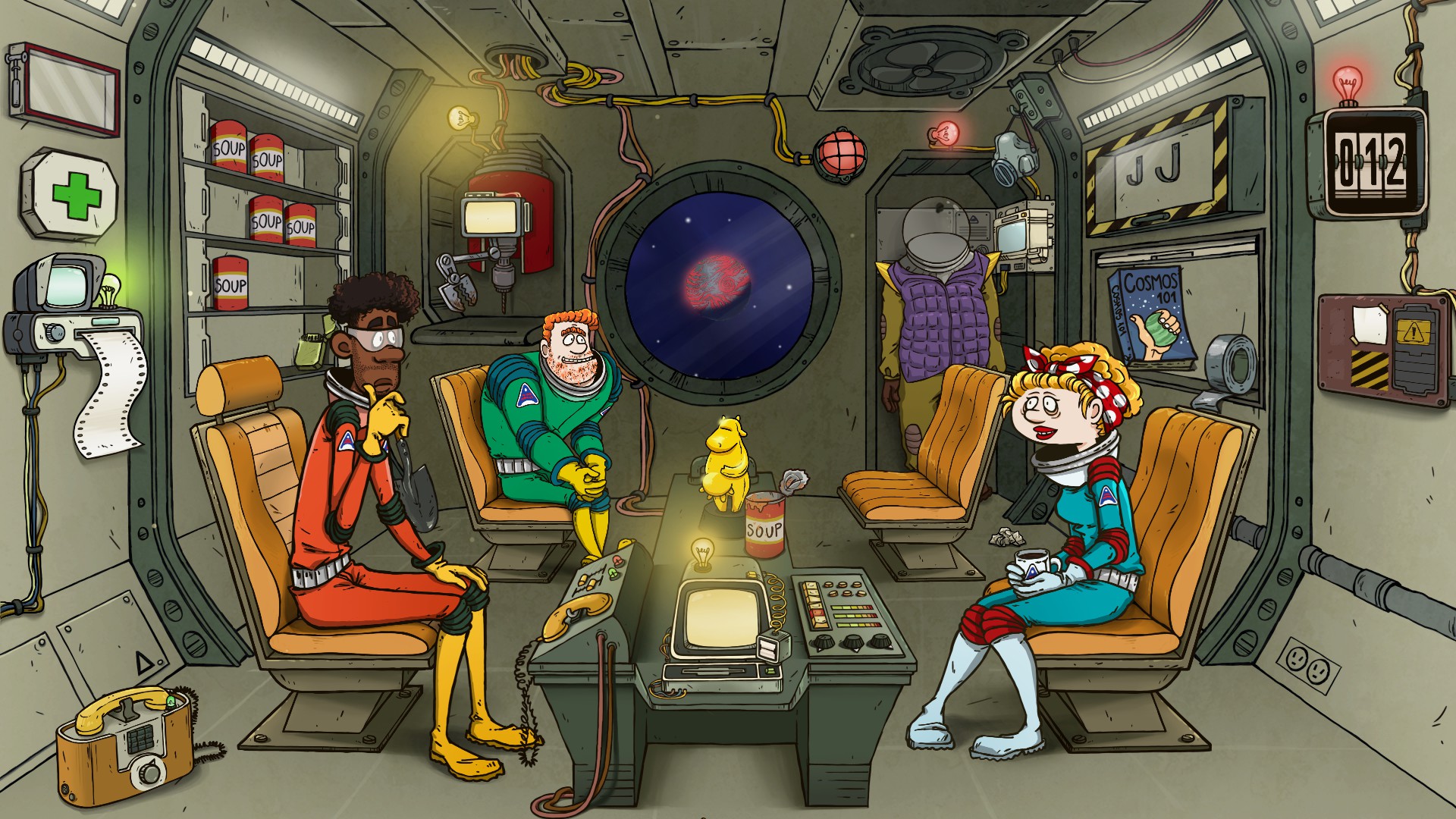 You are one of the lucky few that have been selected to be a part of the Astrocitizen Program. However, just as you’re going on about your carefree life aboard a space station orbiting Earth, nuclear war breaks on the planetside. Unfortunately for you, someone didn’t forget about those in orbit and a missile is on its way. These are the events that lead up to the game, where you play aboard an escape shuttle as you attempt to survive after being stranded in the endless void that is space.

The game is divided into two different phases, but the first one only takes a little over 60 seconds of your time. As soon as the game starts, you’re aboard the space station and you’re given a few seconds to scout the area, and after that, a 60-second countdown will begin, which serves as a warning for an incoming nuclear missile. During this time you can gather as many supplies and crew members as you can and toss them into your escape shuttle. Nonetheless, you can only carry so much at the same time, and different things weigh in differently, so prior knowledge of how much each item weighs (including crew members) can make your initial phase a lot more efficient and allow you to take more supplies with you. 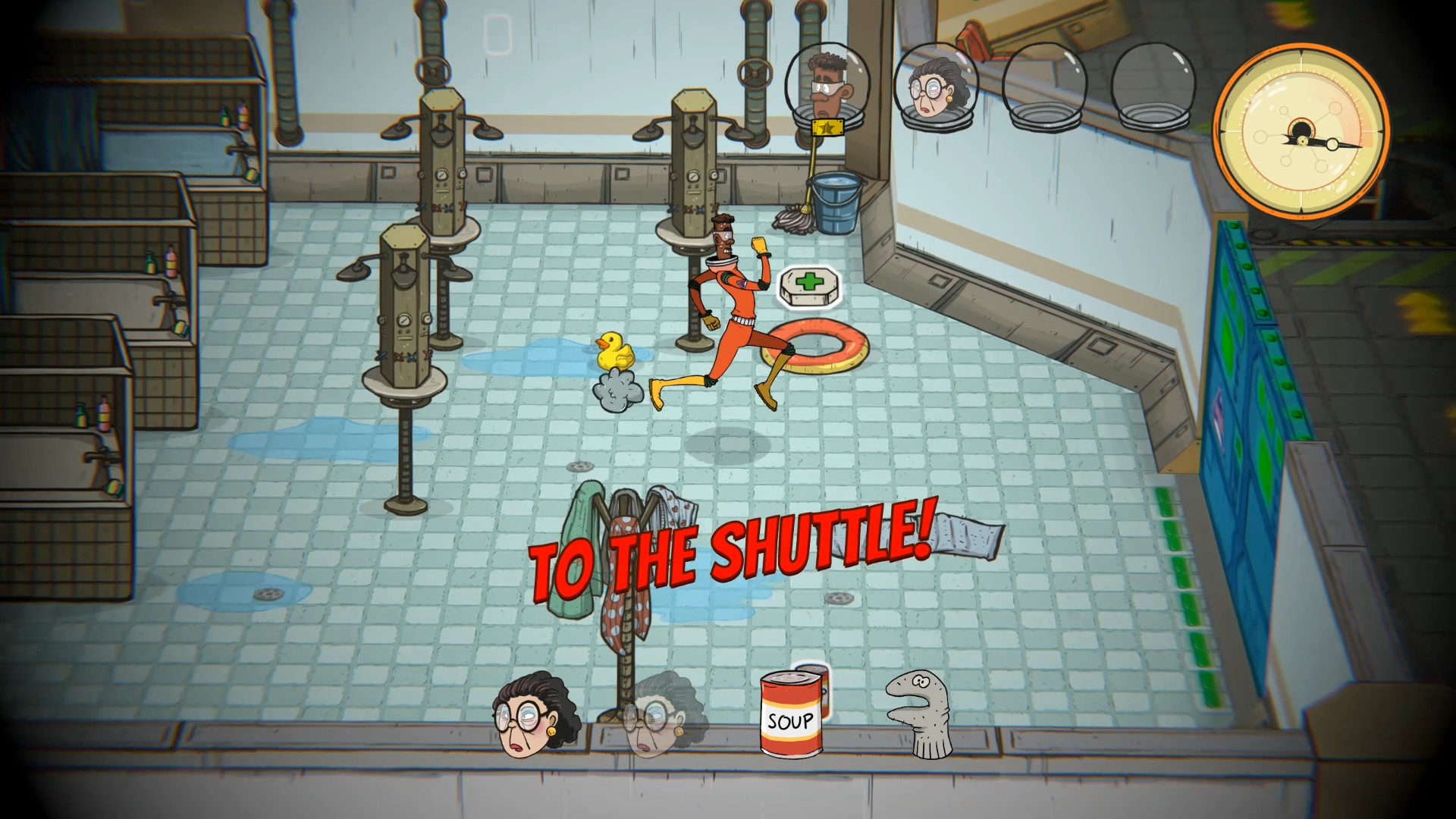 Regarding this phase, it’s worth pointing out that, this time around, the developers have changed the perspective from which the initial phase of the game – where you gather resources before escaping – plays out. You control your character, as you run around the space station, via an isometric-ish perspective, and it’s very easy to get stuck on the environment, and when you only have 60 seconds to gather whatever you can to make your journey easier, every second counts. I wouldn’t really say that it’s the controls fault here, but rather the fact that it is hard to discern if you’re going to hit an object when you’re passing really close to it, as the space station is filled with junk.

Once you’re out of the space station, that’s when the real fun begins. The entire game takes place inside your tiny shuttle, where you and your crew (should you decide to take anyone with you) face a series of random challenges, on top of starvation and a dwindling food supplies. Resource management is a key gameplay element here, as not only you will have to carefully manage your supply of tomato soup (the developers food of election), but there are also minerals, chemicals, and power which can be used to craft first aid kits, insanity curing socks, cans of soup, as well as a series of tools that you can use when you’re faced with certain random events. 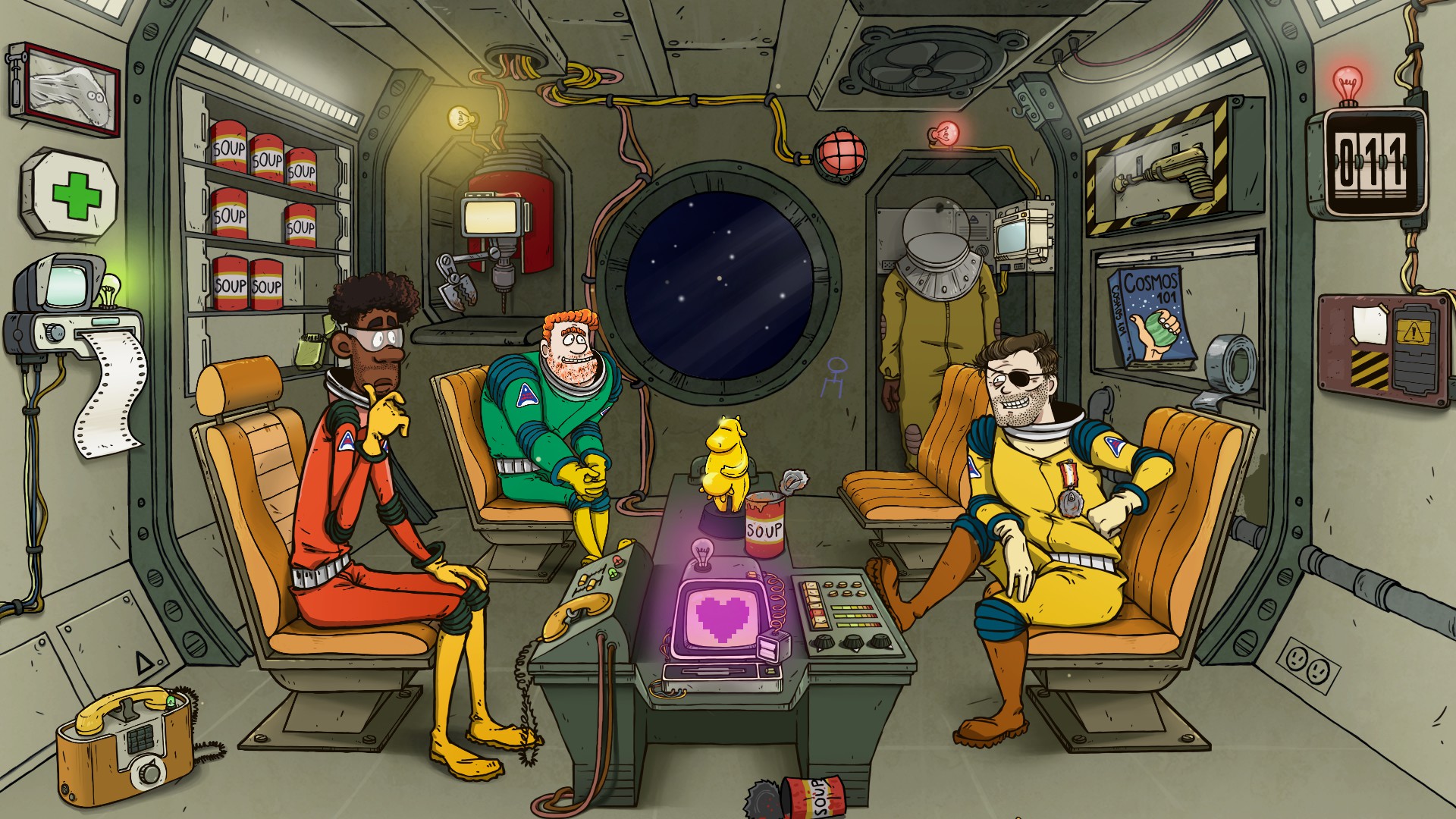 The action takes place one day at a time, and every day you can decide if you want to heal or feed your crew, as well as make a decision based upon what is the best course of action to deal with each situation that you have to go up against every single day. Whether you’re or not successful, depends on factors such as, the state and which tools you use, the health and morale of your crew, and a good bunch of luck, as ultimately every event relies on a random chance.

I’ve seen quite a few people complain that the game is very RNG, meaning that you can fail due to the game’s random chance whenever you’re facing events. With that in mind, while I do understand where these complaints are coming from, I honestly think that this only adds to the experience. This isn’t a game where you want to beat on your first try, or just beat it once and be done with it. Theoretically, part of the fun should come from running into unfortunate event outcomes, as some of them are quite silly and they only strengthen the game’s jolly sense of humor. Nonetheless, I have to say that it is common for you to run into events that you’ve already experienced on previous runs, which only makes the game dull. 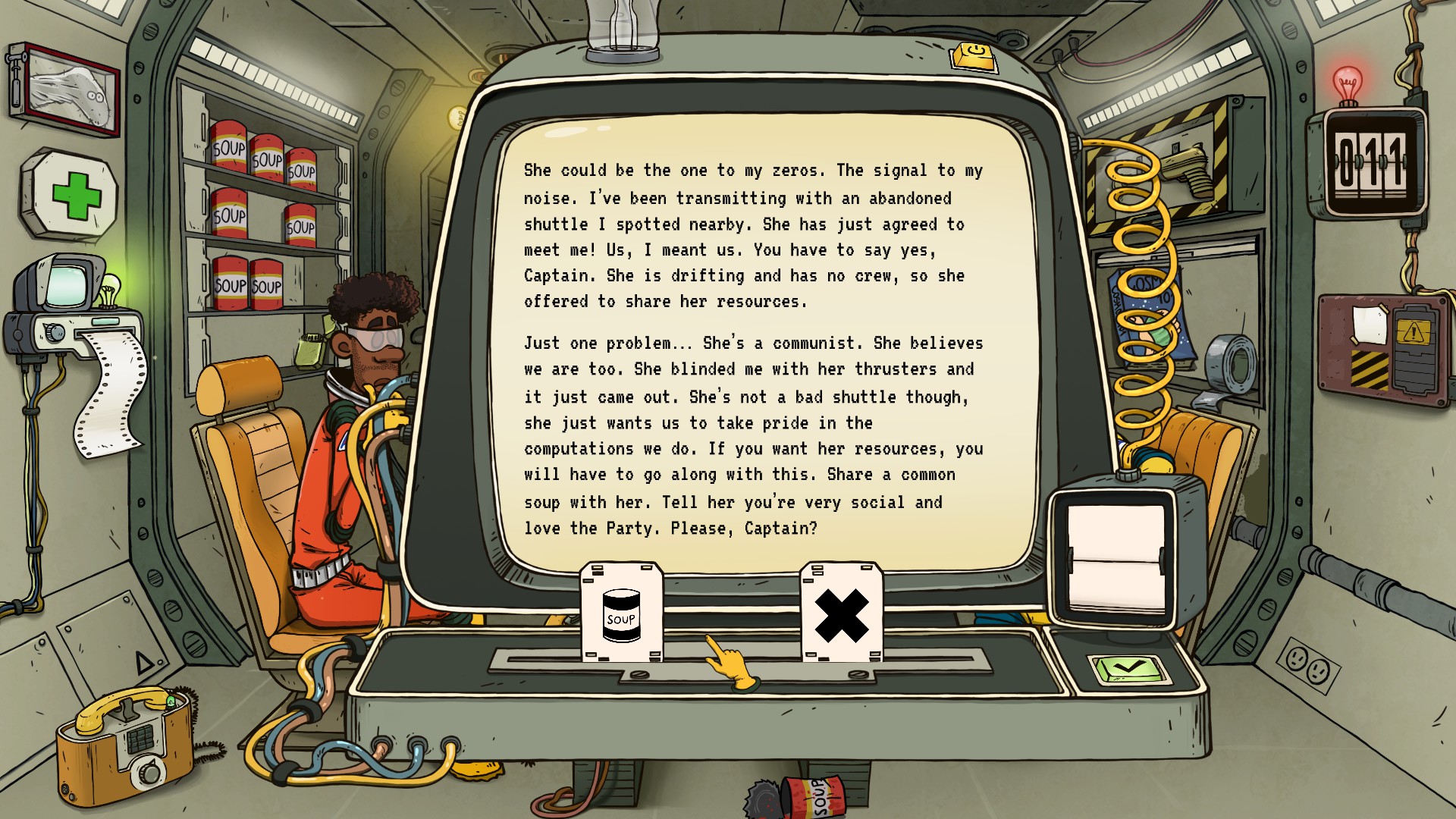 Some of the events that the game throws at you can be categorized into strength, intelligence, and agility tasks. These involve using your crew to perform certain actions, and there are some which are better than others at performing certain tasks, so you must learn your way around and assign everyone to what they do best if you really want to survive in the deep cold space. With that said, even if you assign someone who is a genius to a task that requires a lot of intelligence, the ultimate result is still based on chance. Again, this means that higher stats only assure that you have a higher chance of succeeding, they don’t actually guarantee that you will triumph.

If you are wondering about what sort of events the game puts you in, you can expect boring things such as performing routine maintenance, to deciphering encrypted transmissions, to fighting off death squads of robots, to all sorts of other shenanigans which I won’t spoil here, because they are some of the best that the game has to offer. Still, while the vast majority of the game revolves around random events, there are still multiple endings (which I have yet to see) and there’s always a specific objective that you must do your best to complete, with the first one being to find a planet to land. After which, you can even send expeditions to look for supplies. 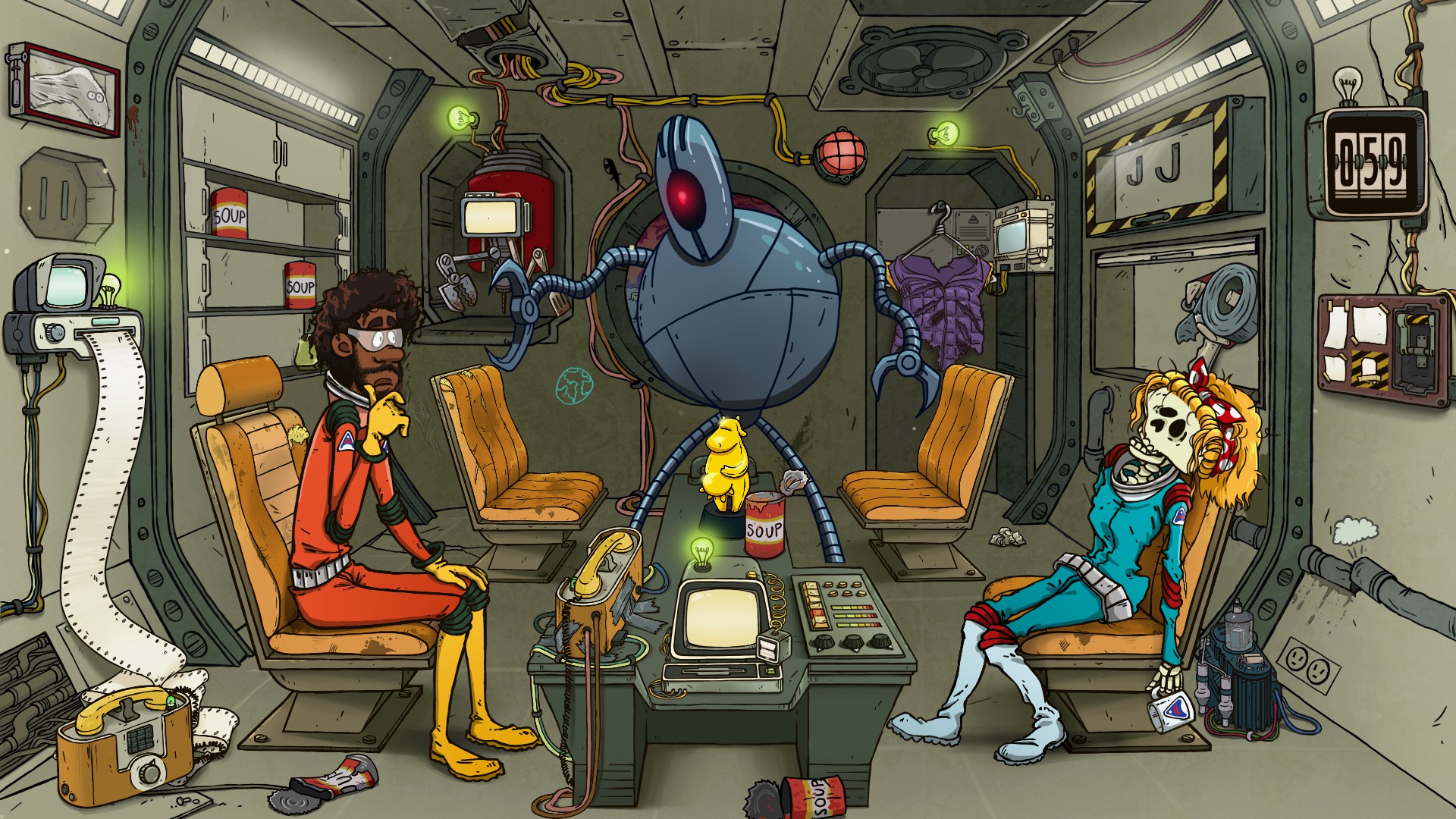 Overall, 60 Parsecs! is a good game to play in short bursts, as you each day can be done in less than a minute, and the game saves every day, so the chances of you losing your progress are extremely scarce. If you’re familiar with the first game, you can expect more of the same, as this is pretty much 60 Seconds! in space. As long as you don’t mind losing thanks to some bad luck here and there, and as long as you’re not expecting something groundbreaking over its predecessor, 60 Parsecs! is bound to provide with some hours of good fun and dark humor.