HEVN is an extremely hard nut to crack, not because it’s convoluted, but because it seems to deliberately make your time with it as cumbersome as possible.

I remember that when I first saw the initial teasers for the game, they were enough to immediately add this one to my wishlist and keep an eye out for any news regarding its development. This was around February of last year, and later in the summer of that very same year, the game was reportedly delayed and a rough estimate release date was not provided. It was going to be ready when it would be ready.

Now, fast-forward to early this month, when the game was finally going to be released, and it ends up getting delayed another 2 weeks. This usually tends to indicate that something with the game is clearly not right, and having played the game prior to release, I’m glad that most people will not have to play through the bug-filled build that I have, or I honestly think a lot of people would go insane. With that said, pretty much every bug that I was initially experiencing has been fixed, but the game still retains some major problems that are inherent to how the game was designed and intended to play.

HEVN is a first-person exploration game at heart, but it desperately tries to be more than that. There are gameplay elements that give this feeling that this could’ve been a survival game with a strong narrative drive, but it ultimately falls short of that goal. 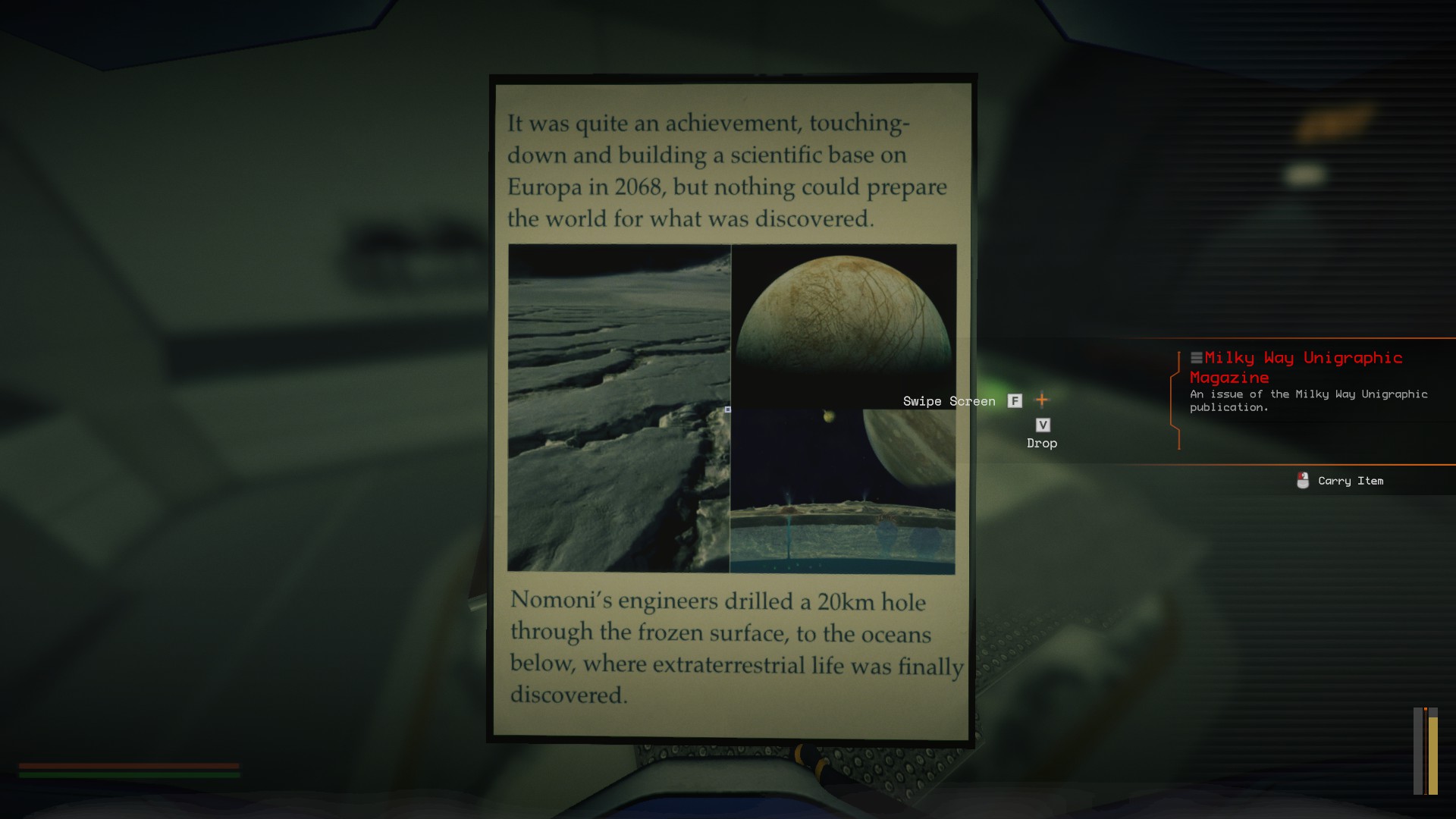 The game features fully voice-acted dialogue sections, but most of the world building exposition is done by reading these tables that you find lying around. These fill in some of the gaps that are left by the main story in regards as to what is going on in the solar system, what is troubling Humanity, and what political and social struggles are taking place.

Taking place hundreds of years in the future, HEVN delivers a puzzling setting where corporations are seeking out to mine distant planetoids in order to get the upper hand in a new resource race. The player plays as Sebastian Mars, who is on a mining mission on Naic, a planetoid where the Nomoni corporation has been extracting a newly found and a groundbreaking mineral called soviten. After waking up from cryogenic sleep, you find yourself seemingly alone in this mining facility, surrounded by strange life forms that have appeared out of nowhere, until you’re eventually contacted by one colleague of yours. This sets in motion the core goal of the game, which is to find a series of data packets scattered throughout the facilities so that you can then leave Naic and expose what is really going on with your employer’s activities. 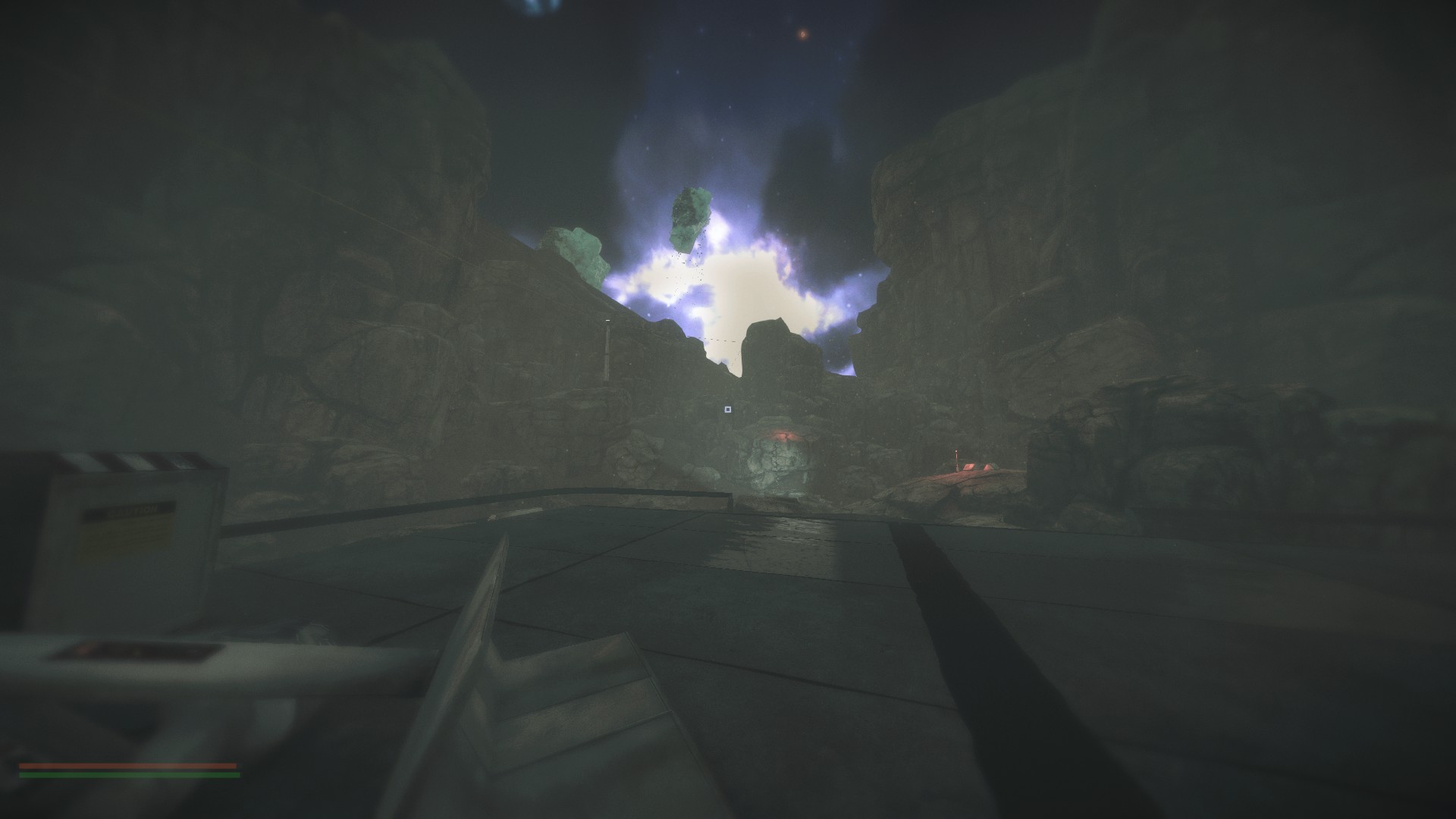 I’ve said that HEVN is an exploration game, and while it might not like it at first, you will quickly realize what the game is all about. While there is certainly combat, looting, and resource management in the game, the vast majority of your time in HEVN will be spent walking around, trying to figure out what to do next or where to go. While not entirely, the game feels like it’s an actual open-world game. Once you’re on the surface, you can pretty much go anywhere you see on your sensors, assuming you find the correct path to get there. There isn’t a particular order of objectives that you have to follow, as the game pretty much throws you into the world and leaves you to fend off for yourself and figure out what exactly do you need to do in order to succeed. This also clearly isn’t a game that rewards players for progressing.

There are a series of indicators that you need to keep an eye out if you want to survive the harsh conditions of this forsaken planet. For instance, you have to keep an eye out on your nutrition, oxygen, radiation levels, sanity, and health, including different limbs conditions. However, I honestly couldn’t figure out why the game actually has some of these. Despite the abundance of food, nutrition is not really a problem, and it just seems to be in the game so that you reserve one or two slots on your inventory for food and drinks. Likewise, oxygen is not really an issue, because by the time you step foot outside, you should already have a mask and you can pretty much explore as much as you want without running out of oxygen. Finally, I can’t really tell what sanity is all about, as it tends to decrease when you get exposed to soviten but it can easily be treated with medicine and the consequences of it dropping are not really apparent. 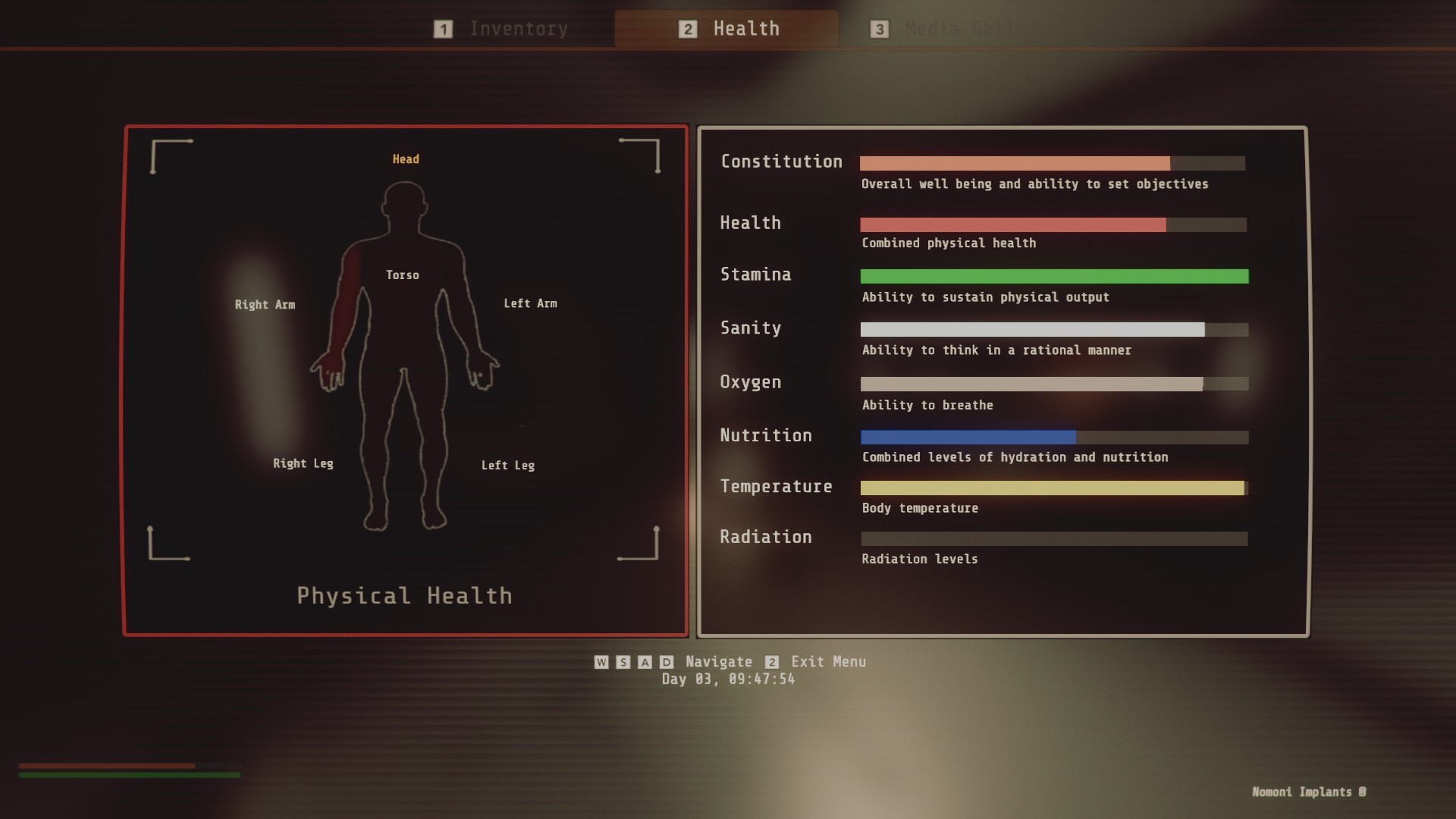 I’ve mentioned that the game has combat, but it really is just a minor annoyance that you have to deal with. There are very few enemies, and they really don’t pose any threat to you if you have your weapons charged. With that said, weapons feel boring, even if they can pretty much melt enemies’ health in a few seconds. On top of that, I’ve seen enemies going through walls, never to be seen again, and other enemies standing motionless as I killed them.

One of the biggest issues that I have with HEVN, is how inconvenient its movement system feels. Walking, running, and jumping around feel extremely wonky, almost as if there’s a slight delay, and jumping, in particular, feels floaty and you can often get stuck on what looks like flat terrain. Traversing what looks like a pretty ordinary path, might usually end up trickier than you’d think, as with each jump you might feel as if you hit a slight bump when in reality there seems to be nothing beneath your feet. Sure, it works, but in a game where you’ll spend most of your time walking, this can get pretty annoying. 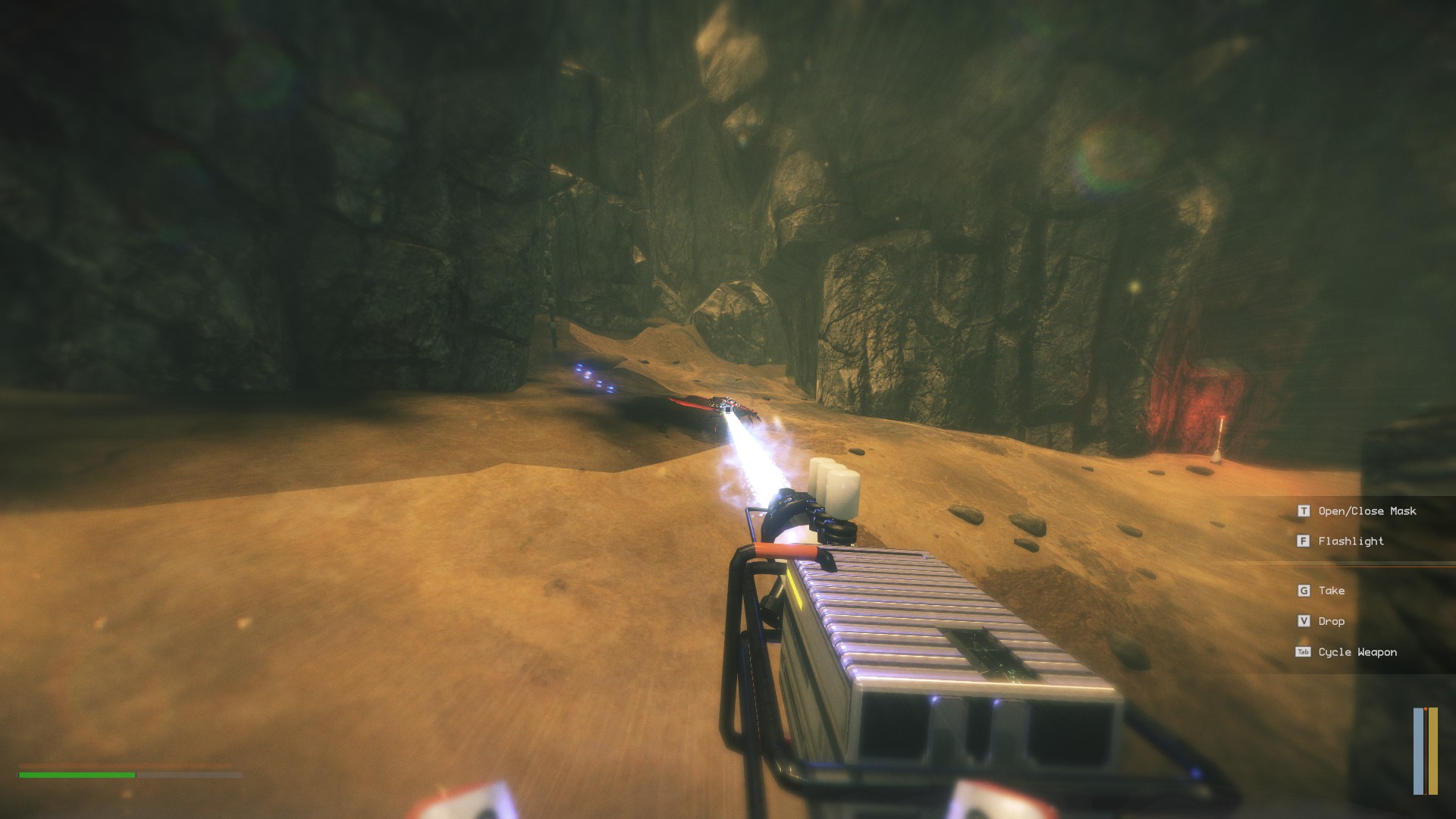 There is another issue that I have with the game, and it’s regrettably one that is quite prevalent in this day and age, and that is the fact that you can only save your progress at specific points in the game. There are these consoles, kind of like the typewriters in Resident Evil, where you save your progress. Unfortunately, the game also doesn’t seem to have a pause function, because when I open the menu I can still move my camera around, so if you suddenly have to do something while you’re playing, you’re out of luck.

Visually the game looks rather dated, and while usually that doesn’t really detract me from the ambiance that games manage to create, I have to say that clipping issues, blocky terrain, and weird animations, were a bit too much to bear here. It’s also worth saying that, despite meeting the recommended specs, the game runs pretty poorly considering its graphical fidelity. 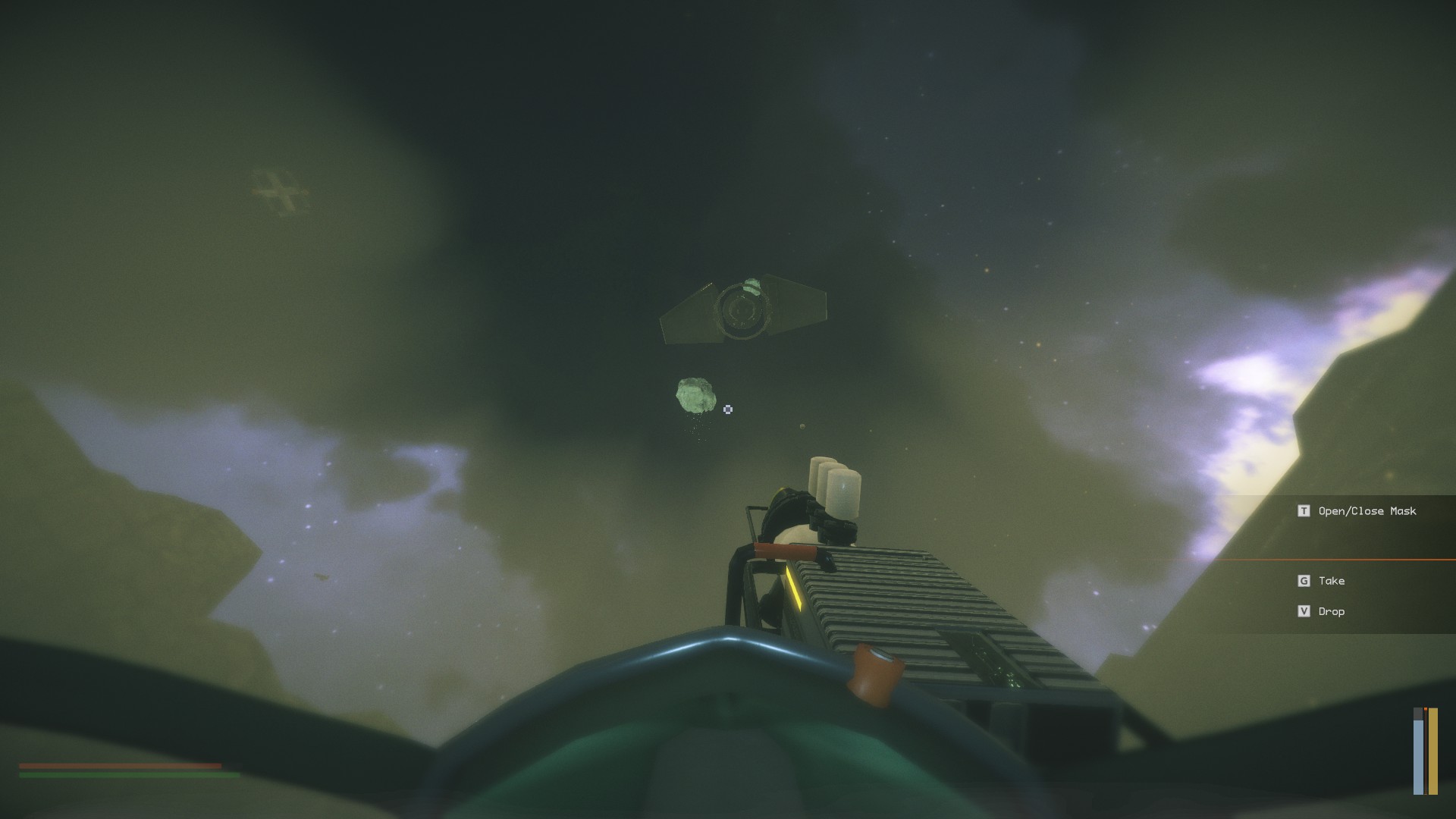 I think that HEVN shows that sometimes you might want to aim lower and deliver a more focused product instead of trying to be multiple things at the same time. Once you get to experience enough of it, it starts to make sense why the game got delayed twice.

While the world building is pretty compelling and intriguing, the gameplay is clunky and annoying, and the main story doesn’t really get anywhere relevant enough to make me feel like the journey was worth it. The best things in HEVN sadly are quite scarce when compared to the rest of the game, and unfortunately this leads to a rather underwhelming game.