“Thou shalt be the winner and not the chicken dinner.” The long-awaited sequel to the 2013 indie-hit is finally here.

Guacamelee! 2 brings back Juan, the most famous luchador in all of Mexiverse, as he embarks on an all-new epic quest to save the world. The game doesn’t waste any time with presentations, and you start off right where the first game ended, and it even puts you through the final boss fight, albeit this time around, things are much easier.

The sequel brings along with it pretty much all the mechanics that were present in the first game, while also expanding on some of them. Guacamelee! presents a stellar mix of the iconic Metroidvania tropes, the combat of a brawler, as well as quite a surprising amount of hardcore platforming, plus support for up to 4 players thanks to local drop-in/out co-op. 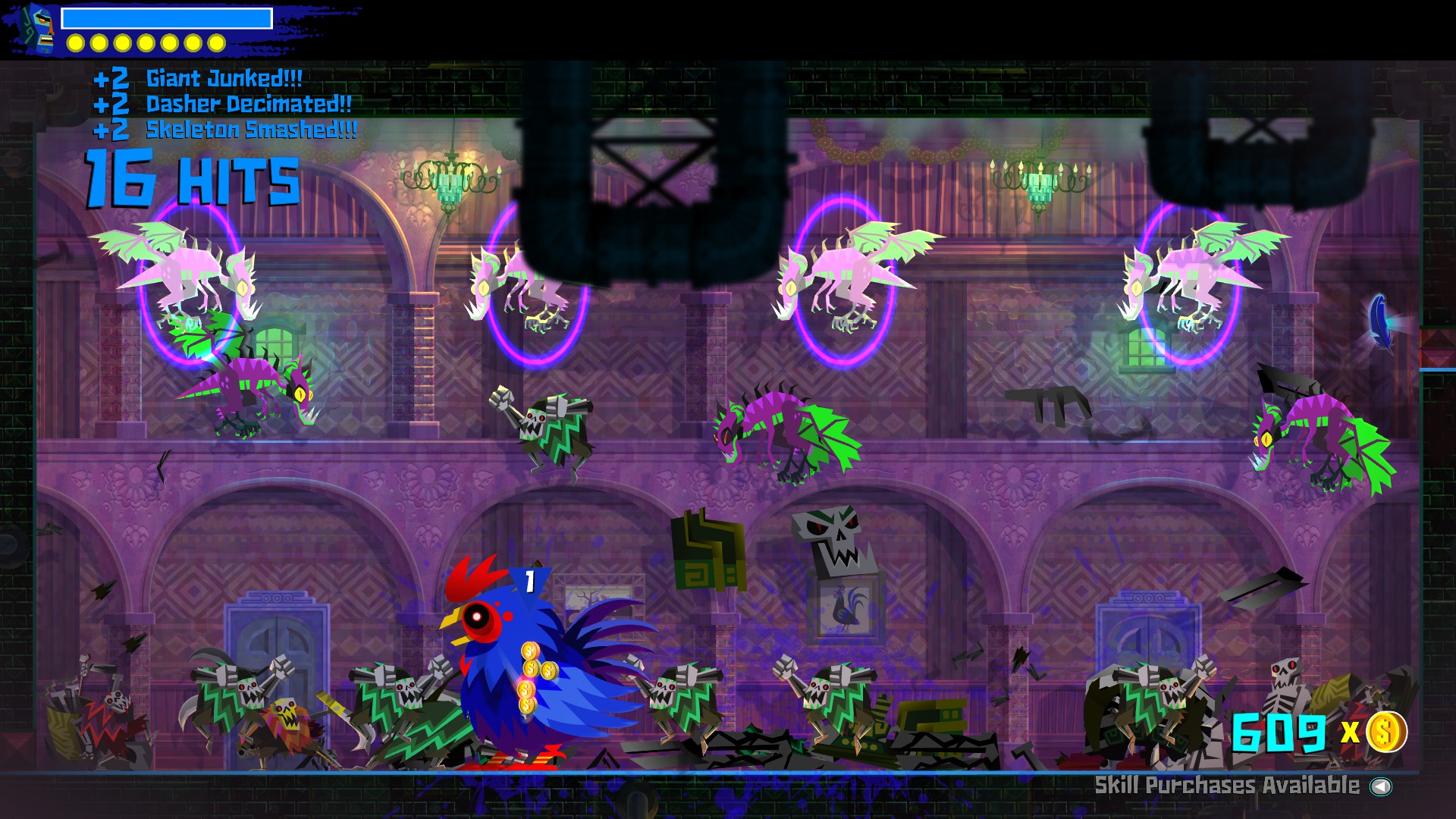 Like every single title in this genre, exploration occurs seamlessly, as you explore various areas and unlock abilities and new moves that allow you to access previously inaccessible areas. In spite of that, backtracking is not something that you will be doing, unless you want to explore previously visited areas to see if you missed any treasure because you couldn’t access a specific zone due to not possessing the required move or ability to reach it. In that aspect, the game’s map does a tremendous job in conveying vital information in regards to locked and unlock zones, pathways, and chests that you may have missed. There are plenty of chests containing health and stamina upgrades, as well as gold, tucked away in corners of the game, but you are not required to get these in order to progress through the main storyline. There are also trainers that allow you to purchase special moves improvements as well as passive upgrades.

While you’ll run into enemies while traversing the levels, there are also those times where you find yourself locked in these arenas, some of which are really tight, where you have to beat multiple waves of enemies in order to be set free or unlock some kind of reward. Most often than not, the treasures that I’ve previously mentioned are also barred by these challenge rooms, which present you with a series of obstacles. These get progressively harder the further you’re into the game, as the game gradually introduces you to new moves and new ways to manipulate your environment. 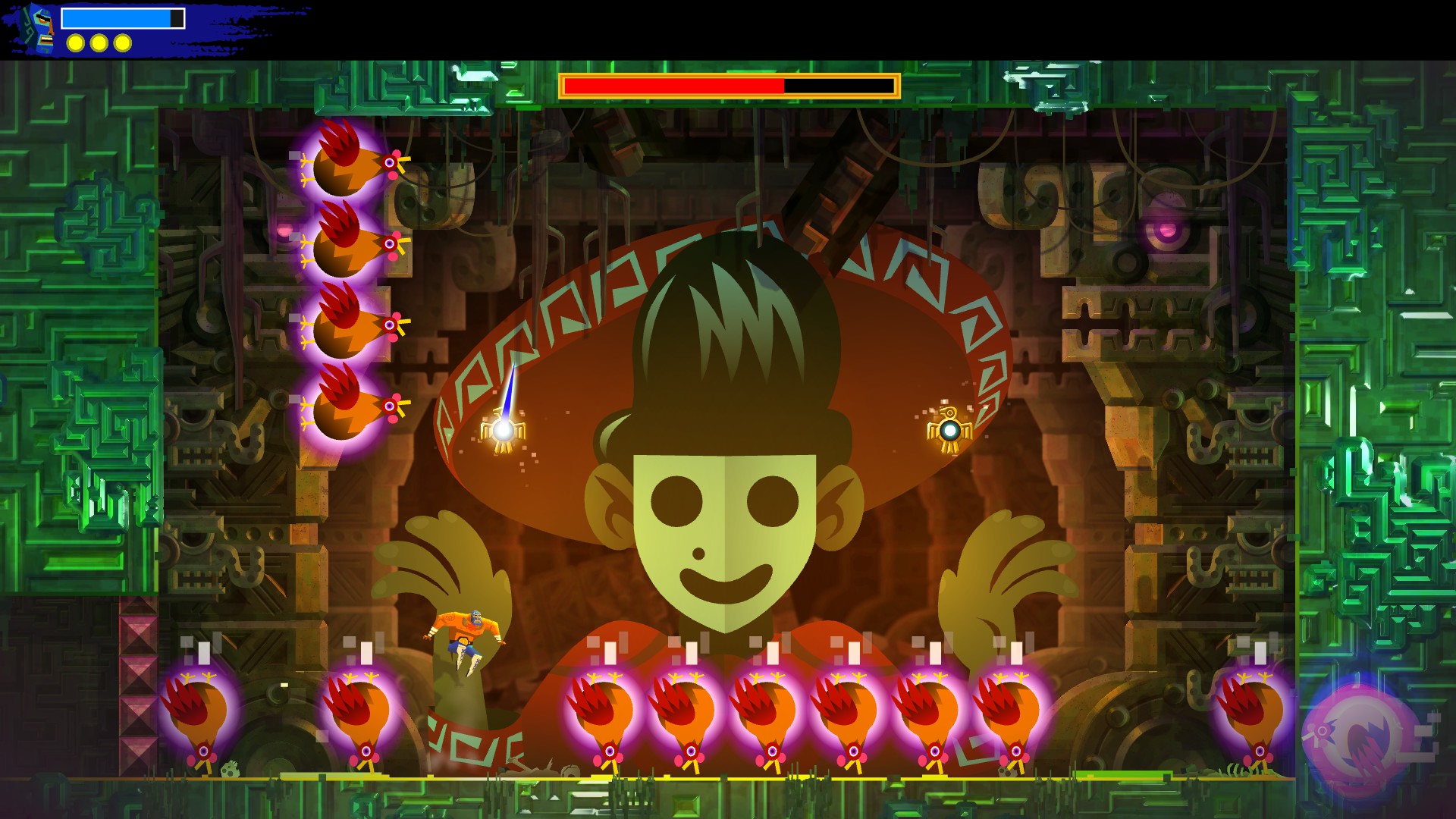 A big part of Guacamelee! 2 is the constant manipulation of dimensions, in this case being the world of the living and the world of the dead. A couple of hours into the game you unlock the ability to swap between these two by simply pressing a button, and from here forward, the game constantly puts you in situations where either enemies or certain walls, platforms, or other things, are only interactable if you’re in the dimension where they actually exist. It might not sound too complicated, but later sections in the game can be quite hectic, as managing a quick change of dimensions and combining different special moves in order to get to hard to reach spots can prove quite difficult.

At its core, the combat in Guacamelee! 2 still feels a lot similar to the first game, with its fast-paced nature, and an extremely smooth and responsive feeling as you chain together all sorts of different combos and moves. Strike downwards, upwards, or sideways, pushing your enemies in the opposite direction, grab enemies and throw them into their comrades, or even perform sick wrestling moves on them. The roster of moves is bigger than in the original game, mostly thanks to the fact that you can now actually fight as a chicken. On the other hand, enemy variety might seem pretty decent at first, but by the end of the game, I found myself tired of seeing the same enemy types over and over. With that said, the few bosses that the game throws at you end up coming off as a refreshment that is very much appreciated. 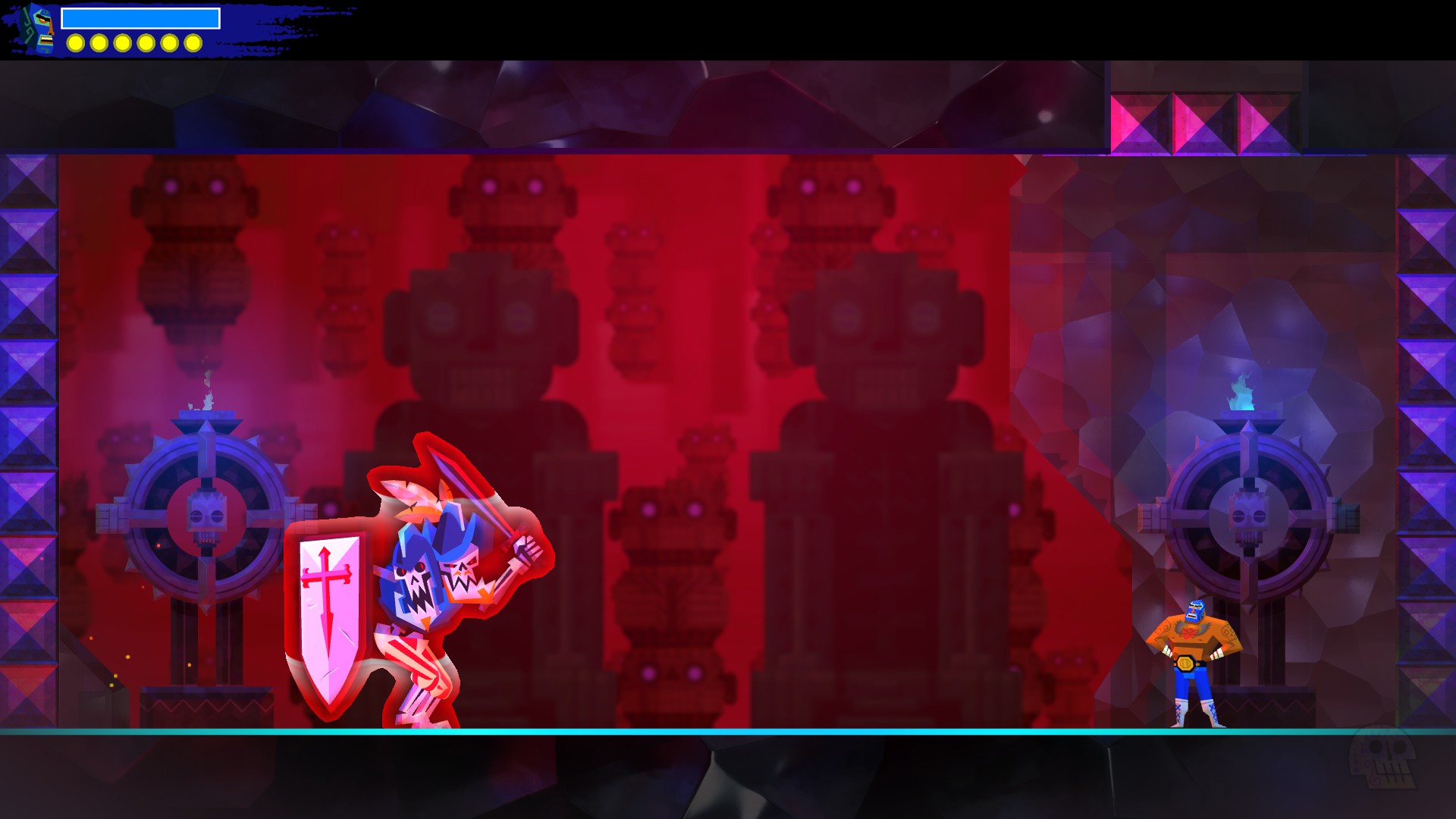 There are plenty of different ways that you can approach fights and deal with enemies, as long as enemies are not protected by a colored shield, which corresponds to a specific special move that you must use in order to break it. On the other hand, the platforming sections tend to be pretty streamlined, in the sense that there is only one right way to beat them, which I find to be a tiny bit disappointing, even if most of them are still pretty well made. My only complaint is that the game has plenty of areas filled with traps/obstacles that instantly kill you, like fireballs, lava, and thorny vines, which can get quite annoying. This is really aggravating when you realize that this pretty much turns the game into a pretty hardcore precision platformer, thus steering away from its Metroidvania roots.

In terms of visuals, the game seems to look pretty much just about the same as it did in the previous game, but it has been quite a few years since I’ve played it so my memory could be deceiving me. Still, I’m not insinuating that the game looks bad, just that it retains its original cartoony aesthetic and graphical fidelity that was thoroughly appreciated by many. The colorful art is extremely pleasing to the eye, and relevant things easily stand out in the environment. The entire game can only be made more special thanks to the unique blend of electronic music and the mariachi band, as well as the absurd amount of memes and pop culture references, which a lot of people complained about in the first game but I never really find it annoying. Actually, this time around, the game even makes it more obvious, and if you explore the entire world thoroughly, you will find some pretty neat surprises. 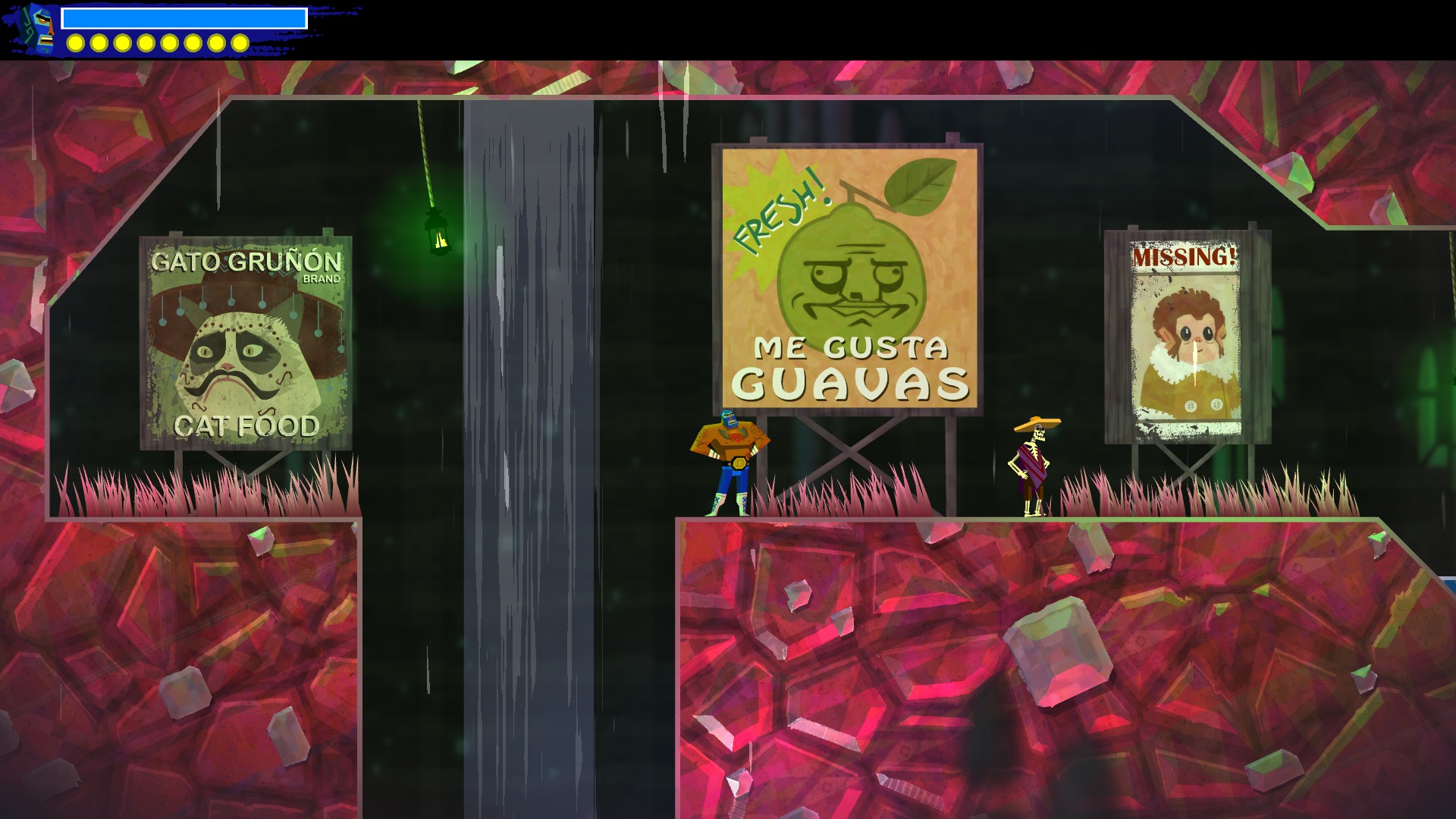 Guacamelee! 2 offers enough diversified content in a way that it can please both those who are just looking for a casual Metroidvania, as well as those that are looking for an extra challenge. If you only go after the main storyline, and you don’t explore the world, collect everything, and if you don’t even explore the hidden plot, you will most likely have an easy time. However, if you’d like to test your skills, chasing every single collectible should prove quite the challenge.

With that in mind, the game should last you around 11 hours, depending if you just want to beat the main game or if you’re also going for all the side content. Nothing feels as satisfying as you tear down wave after wave of enemies and build up your hit combo way above the 100 mark. The outlandish characters and the Mexican folklore and mythology inspirations are exceptionally engaging. If you enjoyed the first Guacamelee, chances are that you will enjoy this one just as much, as long as you do not expect anything groundbreaking.