The Dreamlands: Aisling’s Quest is a dreamlike, colorful point & click adventure game telling a short but respectable story in an interesting way. While die-hard fans of the point & click genre are likely to enjoy themselves, the game’s heavy reliance on semi-logical puzzles and occasionally-forced exposition may prevent many players from feeling much in the way of immersion.

The Dreamlands: Aisling’s Quest is an unexpectedly literal description of what to expect in the way of this story-driven point & click game’s premise and atmosphere. The game’s intro movie is set in the real world and minimally sets up the general premise. After that, however, the entirety of the actual gameplay takes place in literal dreams, allowing for most of the game’s settings and visuals to take the form of a string of dreamy, semi-coherent, loosely-themed islands. 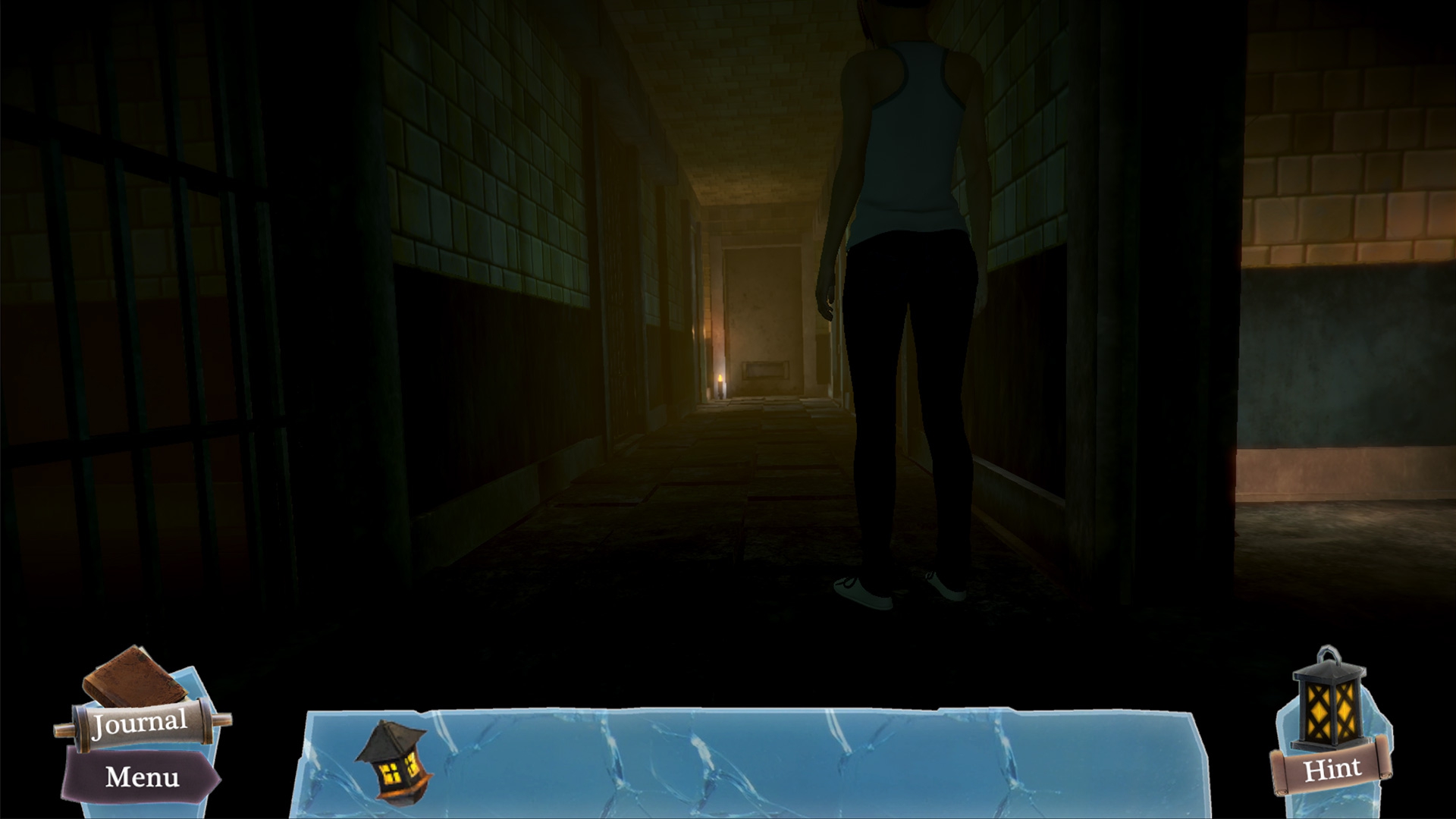 The intro movie is a short scene in which your character engages in some strikingly unsubtle exposition, reading aloud a letter she’s writing to a recipient she ‘was told to write to.’ That one idea accounts for more than half the scene, and beyond that, you don’t learn much except that you know that you’re about to hear something about her relationship wither her mother. That established, the scene wraps up with an animation of your character going to sleep (that oddly lends itself to a few other interpretations), and then it’s off to adventuring. As openings go, this one is a little vague, but it doesn’t take long to discover that it gave you all the information you really needed.

The first area of the game is either an awkwardly-executed tutorial or conspicuously bugged, as you find yourself in an area with a few collectible inventory items and obvious puzzles, the spoils of which are… items that were already in your inventory. While this may have simply been a conscious design choice to lower the difficulty of the game’s first area, the fact that this happens entirely without explanation or comment is more confusing than informative. This confusion is compounded by the immediate appearance of the game’s two recurring collectibles. In most areas, the game has “hidden” either a plush doll or a page from your journal. A collection of the journal pages serves to move the game’s story forward, as it fleshes out the plot’s backstory significantly by filling in your journal. As such, it’s odd that collecting them seems to be entirely optional, and that it’s not immediately obvious that finding them has any effect at all. Similarly, I could find no purpose or effect from collecting the dolls whatsoever, and in their case, the challenge of finding them bordered on a running joke. No need to take my word for that though: can you find the stuffed doll hidden in the picture below? (The answer is yes.) 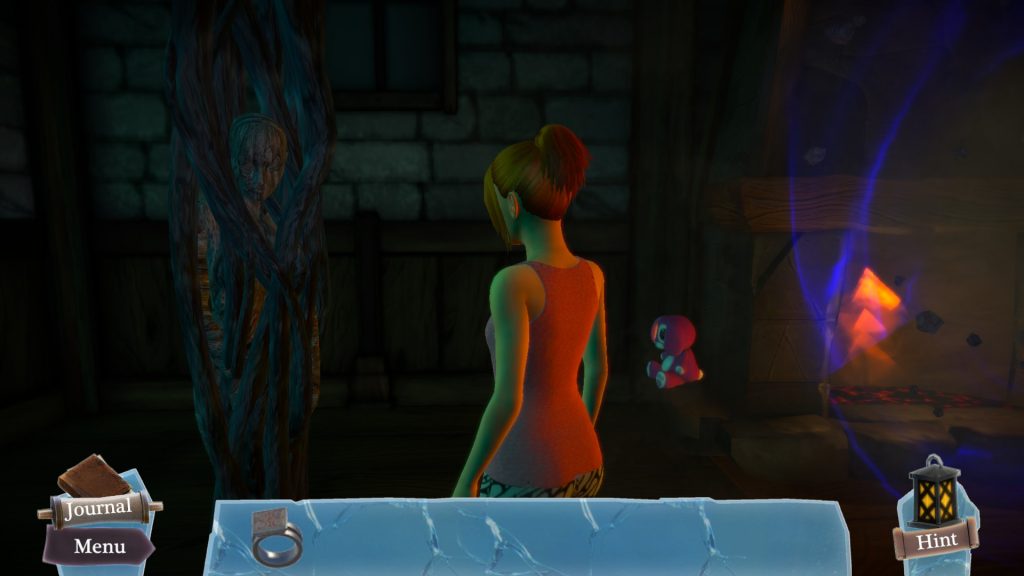 The game features a handful of hidden object game puzzles, which feel a bit out of place and, frankly, are not executed very well. The game does a poor job of establishing that a hidden object sequence has started at all, and provides no hints that you should even be expecting any before you find yourself immersed in them. I was more than halfway through my first one before I even realized what I was doing. Once a hidden objects puzzle has started, the challenge of finding the objects is trivial, owing to the fact that hovering the cursor over one of the objects causes it to glow brightly, as seen on the bones in the image below. That said, for those who prefer their hidden objects to actually be hidden will be in for a bit of a disappointment. 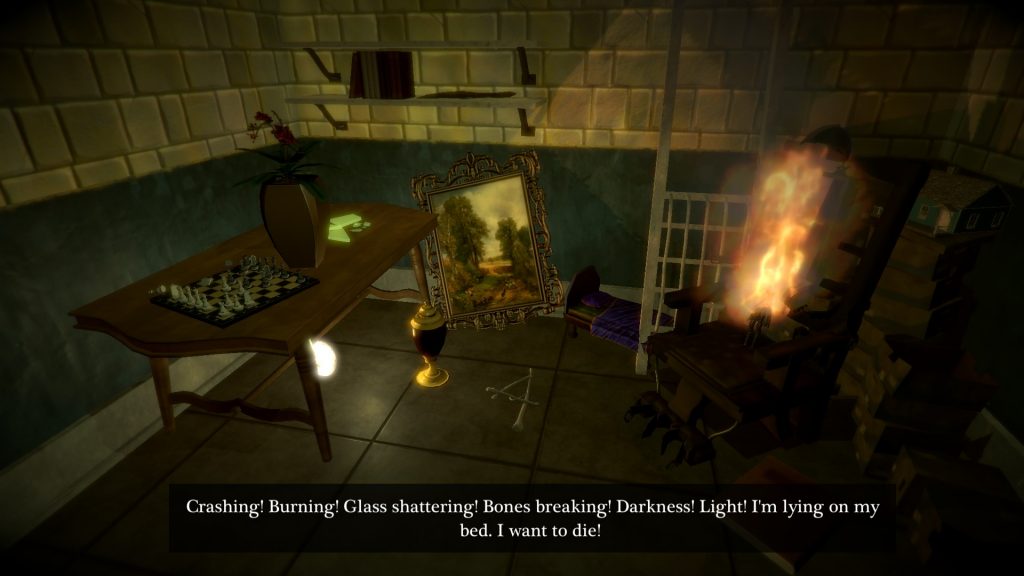 The game’s other puzzles generally are easy, which is fine. Some minor criticism could include that a large number of them are not particularly logical, but arguably they shouldn’t be, as their hazy quality is more befitting of the dreamworld setting. One exception is a puzzle which features three rotating rings. As is typical of such puzzles, the task is to align them to show a picture. Atypically, however, the three rings rotate entirely independently of each other, making the task of aligning them extremely straightforward. As if anticipating this criticism, a statue puzzle later in the game features a similar mechanic, but this time the segments are linked. Here, the puzzle becomes oddly challenging because (as near as I can tell), the correct solution requires a particular alignment that is perhaps hinted at by the surroundings, but still seems somewhat arbitrary. 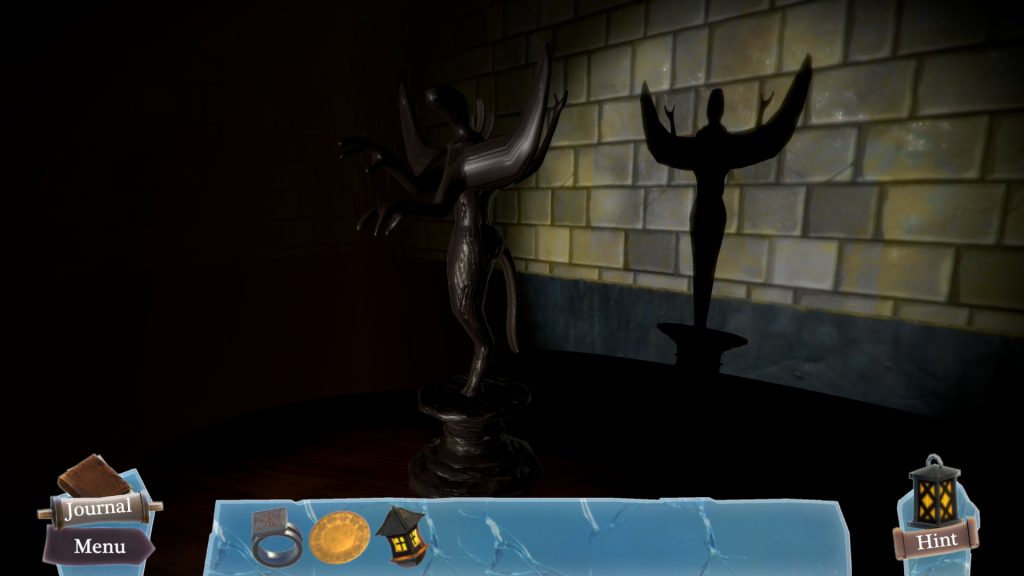 Probably the most distressing part of the game for point & click fans will be that the game features some light action sequences. Though these are easy enough that even genre purists will likely find it in themselves to overlook them, what challenge they do feature is so arbitrary that it becomes a genuine annoyance. All you have to do is click an inventory item on a series of figures that move towards you somewhat quickly. The problem is, the game doesn’t allow you to pre-click the inventory items to ready yourself, and will actually unequip them if you try. This creates an entirely unnecessary sense of artificial mouse-movement urgency that the game would have been better off without. Though neither of these sequences took me more than two tries to beat, I still find myself frowning at exactly why they took two tries at all.

With all that said, it bears mentioning that the game’s flaws are limited to relatively minor gameplay execution choices. Though some of these points resemble and may actually be bugs, in reality, the game is entirely stable and runs smoothly. None of the mechanics mentioned should make you feel particularly frustrated or prevent you from making progress. And, turning away from technical decisions, the game’s best feature is its sense of style. It’s largely successful in creating dreamlike atmospheres, and the visuals were clearly created by someone with a good sense of color and design. Though some of the game’s 3D has a vintage quality to it, in general, the game is quite nice to look at. Similarly, the game features a surprisingly enjoyable soundtrack, with some tracks occasionally stealing the show as you pause to savor them before losing them to the next area. 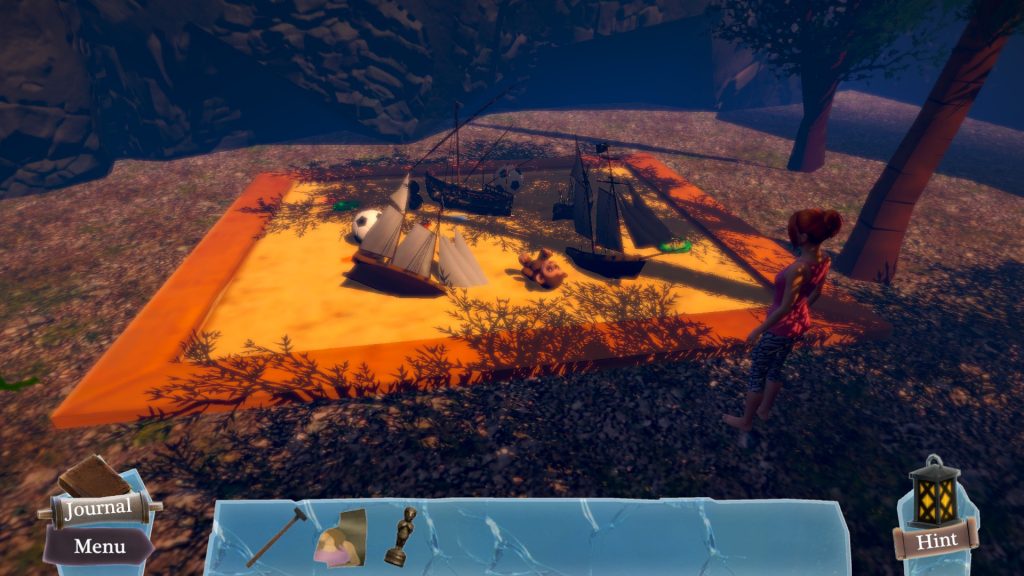 The Dreamlands: Aisling’s Quest largely succeeds in its journey of dreamlike world building, giving us a colorful point & click adventure game telling a short, but significant, story in a novel way. Though enjoyable overall, semi-logical puzzles and occasionally-forced exposition hold the experience back from being particularly memorable.