PREVIEW: To Hell with Hell

To Hell with Hell is yet another roguelite that has recently arrived in Steam’s Early Access program, but does it offer anything new that other games in the genre do not?

While story is clearly not the main focus of the game, the game starts off by providing some context as to what is going on, why you are in Hell, and even though it certainly leaves quite a lot to be desired, I still find it interesting enough to see a game to take on the theme of Hell from a perspective that you really don’t see very often. The ruler of Hell has been ousted by a powerful demon that is seeking to wreak havoc throughout the realm, and you, as one of the many offsprings of Asmodius, the true ruler of Hell, are summoned to simply kill demons, lots of them.

What you see here is what you get, as the game is pretty straightforward, and, if you have played games like Enter the Gungeon or Nuclear Throne, you should know what to expect as the core experience. To Hell with Hell plays pretty much like those titles, at least in terms of how the controls feel. The game is a twin-stick shooter at heart, but the combat feels and plays like a combination of that genre and a bullet hell. If there is one rule that you quickly learn about this game, it is to never stop moving if an enemy is aiming at you. There are tons of projectiles, of all shapes and sizes, some fast, others slow, and some even spawn smaller projectiles once they hit something. It’s pretty much what you’d expect Hell to be… 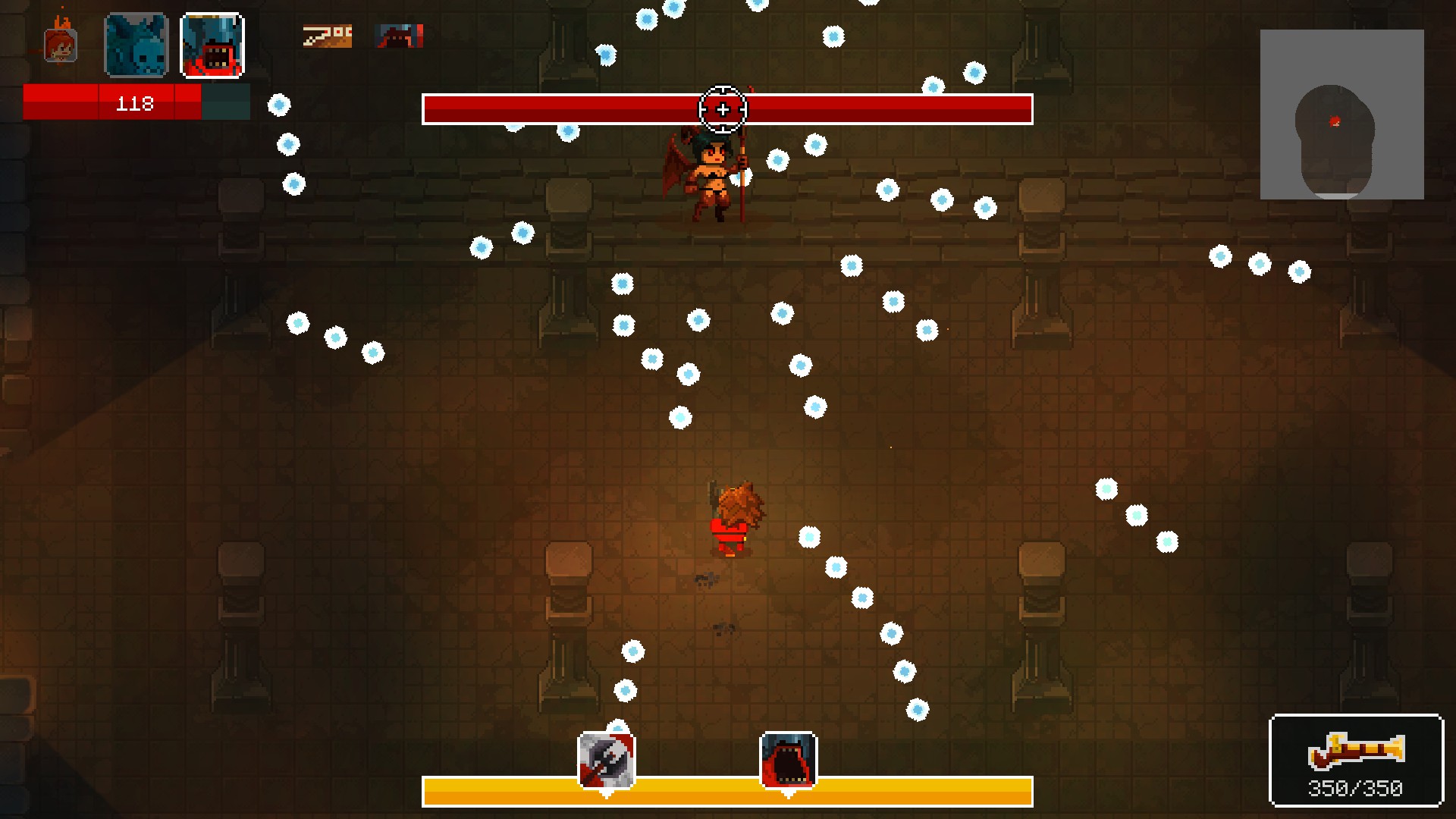 The game has plenty of variety in terms of enemies, in the sense that each enemy type forces you to move in a specific way, carefully avoiding their shots, and better positioning yourself so that you have the advantage over them. It’s also pretty easy to distinguish enemies from each other, which I think it might have something to do with the fact that the levels, which are randomly generated, look and feel pretty bland. They’re essentially just a series of rooms and hallways, and they’re not rooms in the sense of something like Binding of Isaac or Enter the Gungeon, the whole level is an open area. Still, the narrow passageways, and the continuous influx of enemies, only adds to the already considerable task that is avoiding enemies shooting at you from everywhere.

So, by now you might be wondering what really sets this game apart from others like it, so I’m just going to address the biggest feature of the game, which is the masks. Throughout the game, usually at least once per level, you will be able to find a mask. Each mask grants you two different abilities, and it also increases your total health pool. However, in order to use your newly acquired abilities, you must first kill enemies in order to build up your rage meter, which is partially consumed everytime you use one of your skills. On the other hand, while each mask that you pick up increases your overall health, each mask is treated as its own separate health bar. This means that if you keep getting hit, you will eventually lose your mask, and along with it goes its fancy abilities. 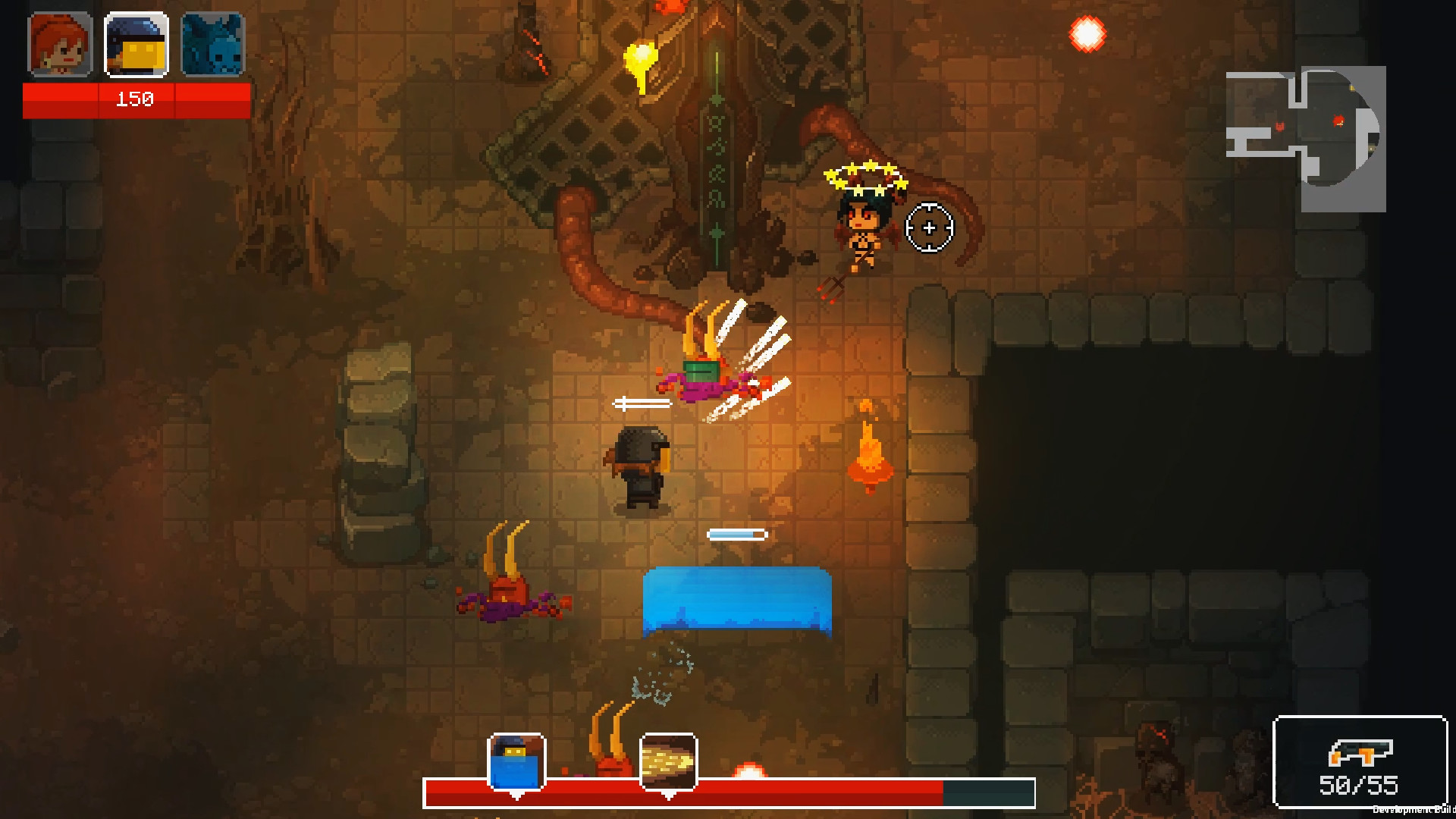 I have to admit that I didn’t even manage to figure out what some of the masks that I managed to get my hands on actually did because I got them in the midst of battle and things tend to get pretty hectic, so panic ensues. Nonetheless, most often than not, you can get some pretty cool ones, like deploying a sentry turret, being able to charm enemies, tossing fireballs, firing ice projectiles that create a huge explosion on impact, and even dash. These are all useful in their own way, but no matter which one you have, they usually are life saviors in some occasions, especially during boss fights.

The fact that you don’t have the ability to dodge at all times, no matter which masks you have, makes the whole game a lot harder and sometimes extremely frustrating. Some people will most likely be into the inherent difficulty that this game carries with it, while others, like myself, probably won’t find this to be fun. The issue I have with this is that, besides running around, you don’t really have much mobility, and thus, when your screen is filled with enemy projectiles, you instantly know that the chances of you making out of there alive are pretty scarce. 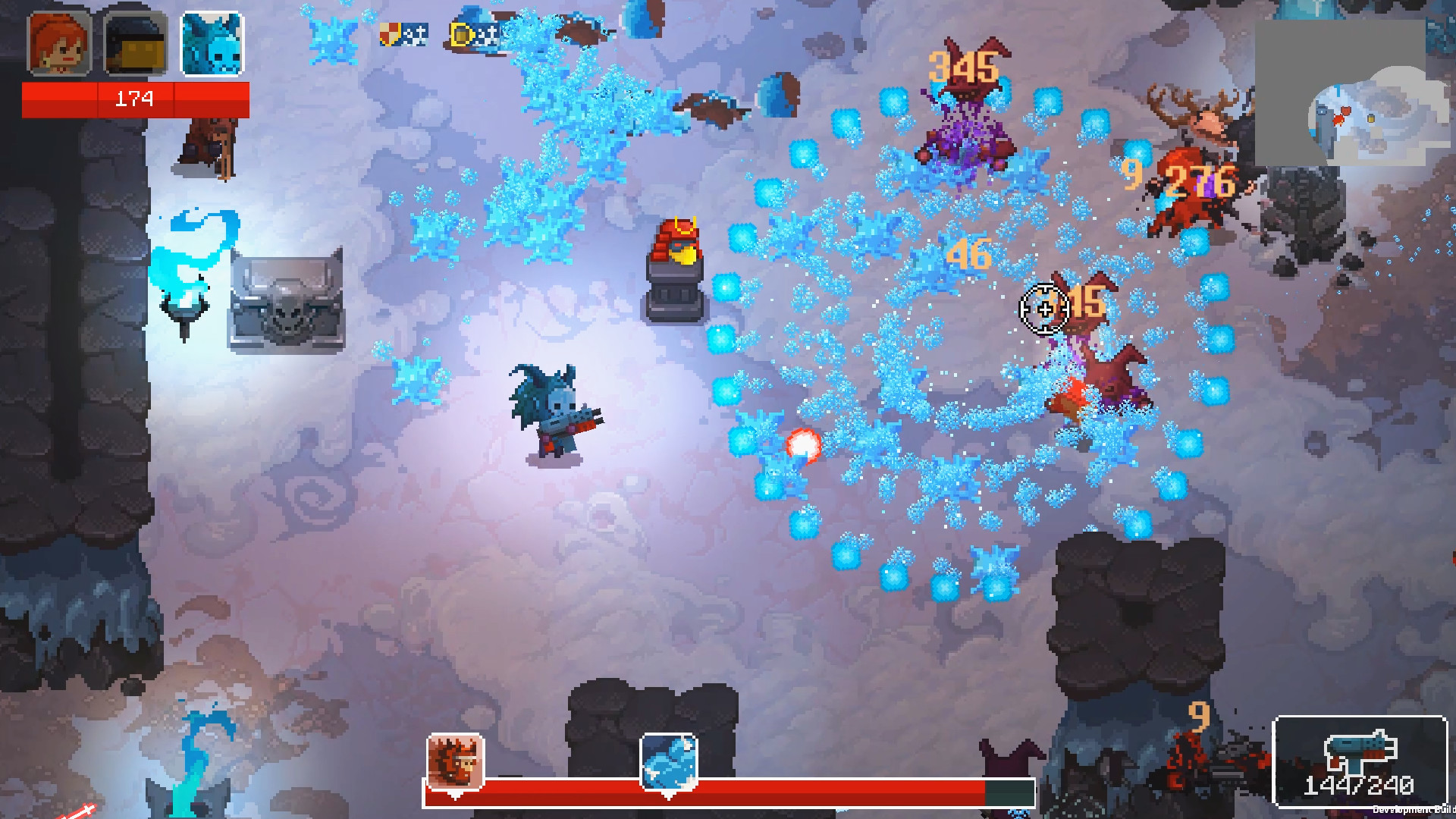 Besides the masks, you can also come across all sorts of weapons and timed power-ups that you can use. To Hell with Hell actually forces players to manage their weapons and their ammunition by only allowing you to carry two weapons at the beginning of the game. Still, there is a chance you might be able to add more slots, but even then, ammo is rare to come by, so spraying and praying is really not the best tactic here. I must say that I’m not impressed by the different weapons that I’ve seen so far, everything just feels and looks so basic. For the most part, you’re either using some variants of pistols, shotguns, or machine guns, there isn’t anything really crazy or insane that has that wow factor.

I haven’t been able to beat the game, and I’m playing on the only difficulty that is available right from the start, which is “Walk in the Park”, but, in my defense, I can totally confirm that this is no ordinary walk in the park. However, the game does allow you to save up to six times throughout your run, but you can only do it at the end of each floor. This means that if you die, you go back to your last save, even if that was two or three levels before. At the end of each floor, you’re also given a few perks from which you can pick one to carry with you for the rest of the run. Things like decreased enemy projectiles speed, chance to heal upon scoring a kill, or increasing the number of masks or weapons that you can carry with you are just a few examples of the perks that you might find. 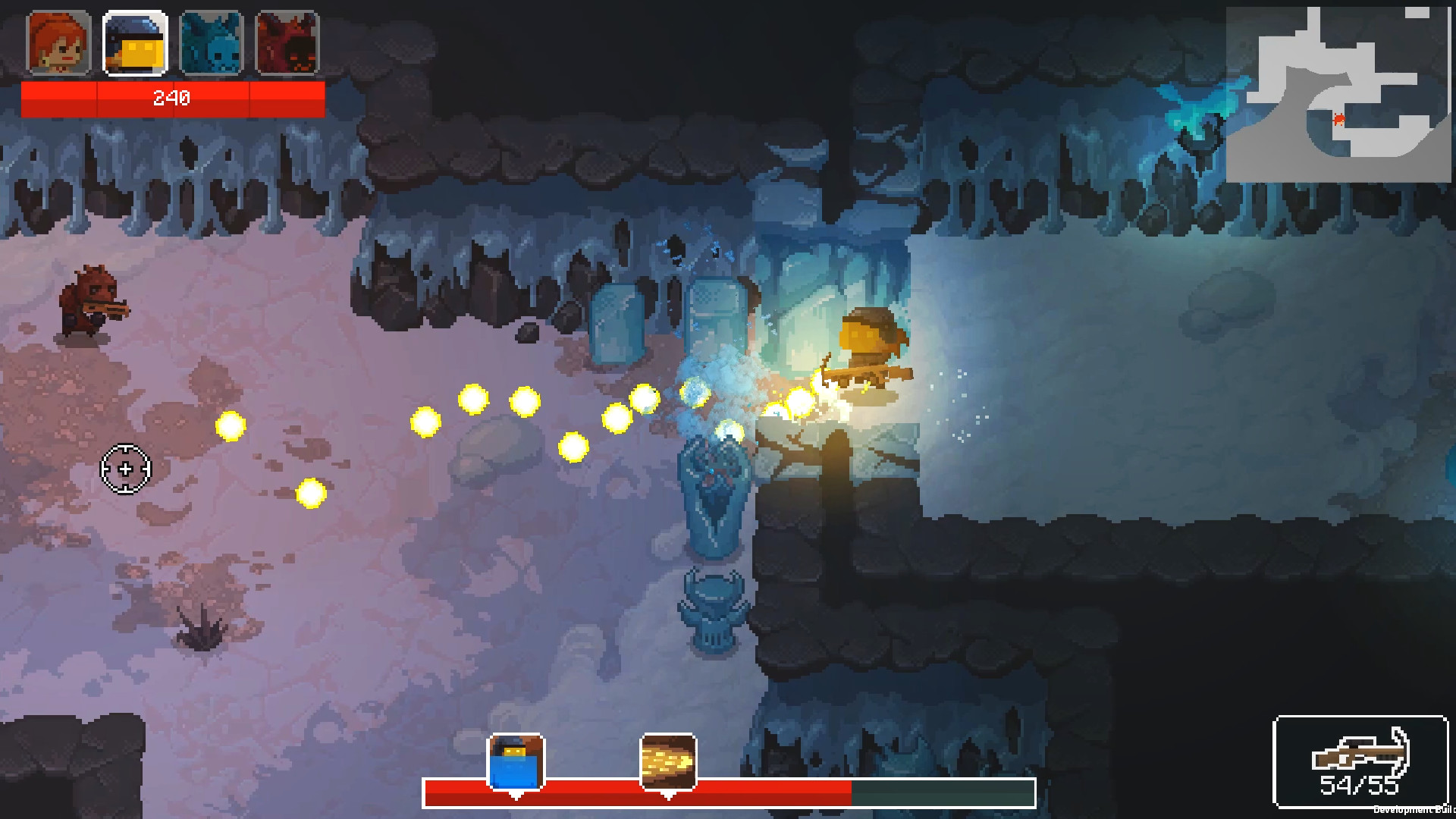 Although I can appreciate the game for what it is, I can’t really say that I’ve enjoyed my time with it. While it is an extremely competent game already, and even though it provides a set of great foundations for future content, I still think that it does not offer much in terms of variety. For what it is and what it is trying to be, I believe that the game is good enough that hardcore fans of the genre will most likely have a good time with it, but unfortunately, I don’t think that I qualify. I hope that in the future, as the game gets updated during Early Access, new changes and content might make me go back and give it another shot, but as of right now, I don’t plan on playing it again anytime soon.