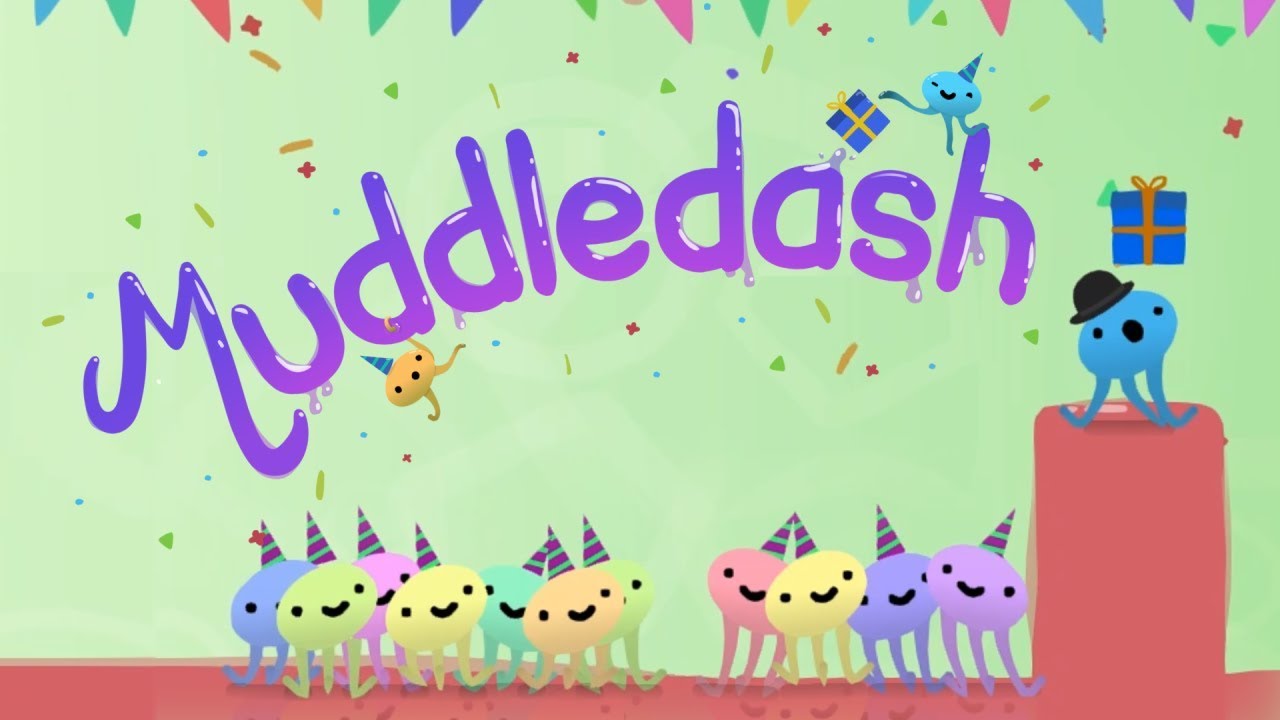 A party game about spawns of Cthulhul trying to enter a party.

“Quik, ve are late to ze partyyyyy!”
“Izn’t it an xclewsiv partyyyy? Ve need ta bring a gift fo’ ze host!”
“Ono, u av a giftttt?”
“No but luk, ther iz one right zere!”
“Ay saw it feerst!”
“No, meeeee!”
“Fite meeeeee!”
Yes, that’s exactly how I imagine these alien octopus-shaped tentacle-wearing people talking to each other. In case you need a translator, they can only get past the bouncer by announcing themselves to the party with a gift. And there is only one gift. Whoever brings the gift to the finish line wins!

Muddledash is a local party game focused on competitive platforming, and it gets something right: it’s not fun if the best player always wins. Think of Mario Kart. Without the items, it would just be a technical racing game and it would not be very interesting. Perhaps you are still sore about one of those blue turtle shells that ruined your chance at finishing first during this one race, but items like this one are necessary to keep the skilled players in check and give a chance for everyone else to have fun. Basically, games that hinder players located in front during a race are more enjoyable during a party. Both for the less skilled people who can have a chance through other means than pure technical maneuvers, and for the competitive people in front that need to overcome some welcome challenge. It’s better than staying first until they are bored and everyone else is simply dispirited. 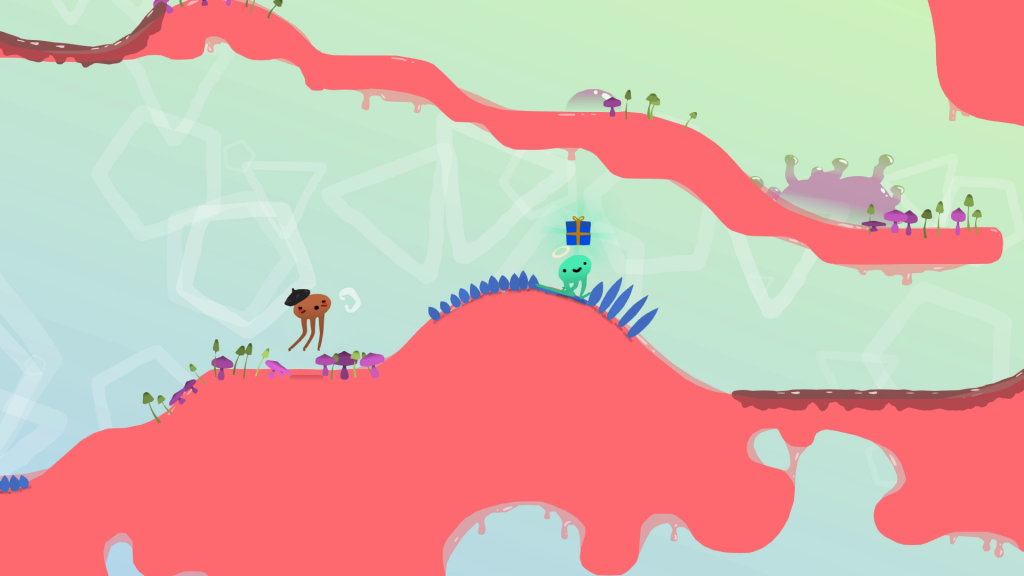 In our fashionable squid race, this translates into solid grass that only slows down the first person to step on it before remaining harmlesslly flat, or little glottis-like tree-thingies that launch a drop of mucus forward as someone touches them. In a way, the means to attack the first player are built in the layout of the level rather than picked up as items, so there is not even that to worry about as the squids bounce all around the place. Ah yes, there are bumpers and oily slides to go faster. 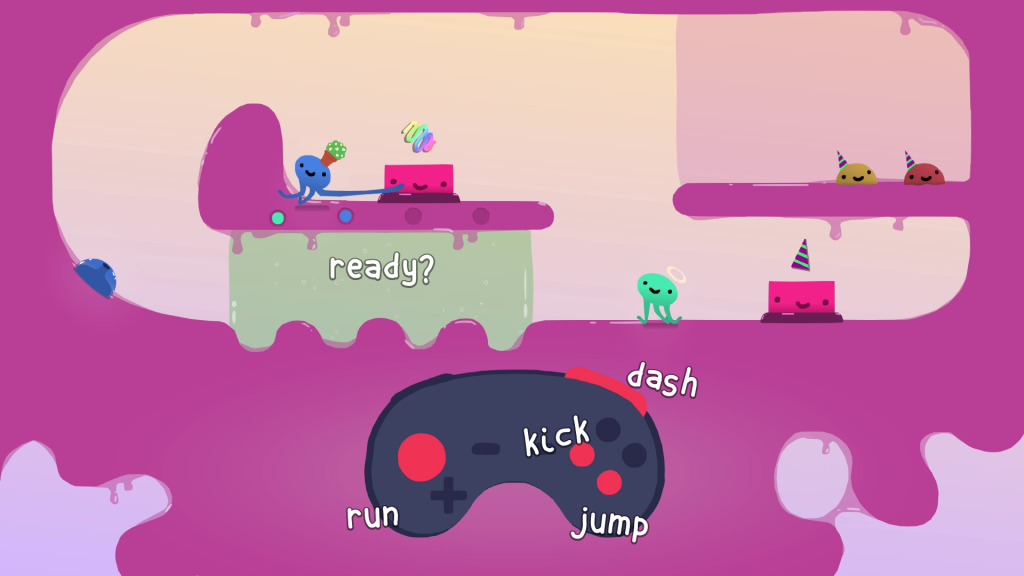 Platforming here is smooth and fast, it does not feel stiff or awkward like in other titles. Muddledash understands that it’s fun when the players are interacting rather than each of them doing their own thing in the level, so the action is focused on a pack and if anyone is left behind they will reappear close to the action. And by action, I include tentacle whipping or punching or whatever it is that these creatures are doing to steal the gift from each other. Apart from kicking, the creatures can also jump and dash. Simple to learn. It’s comical and we were smiling as we played; casual gamers enjoyed their time even though they were still outmatched by your humble servitor. 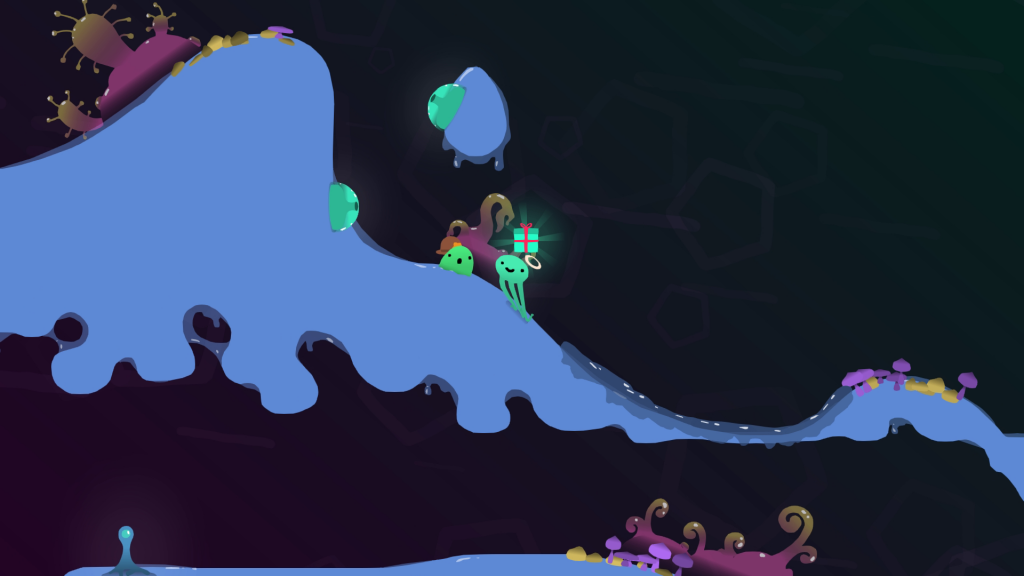 However, as funny and well designed as the concept is, it does not go further than that. There are a lot of different level layouts, but after a while there is nothing to renew the experience or make it feel different. So, it won’t be a game that you sink all your hours into, but it definitely would be nice to add it to a party’s rotation of games. Thankfully, the price reflects that, as it’s offered at about half the usual price for indie games and since some players will want to know if the game ticks the following boxes: online – no, bots – no. 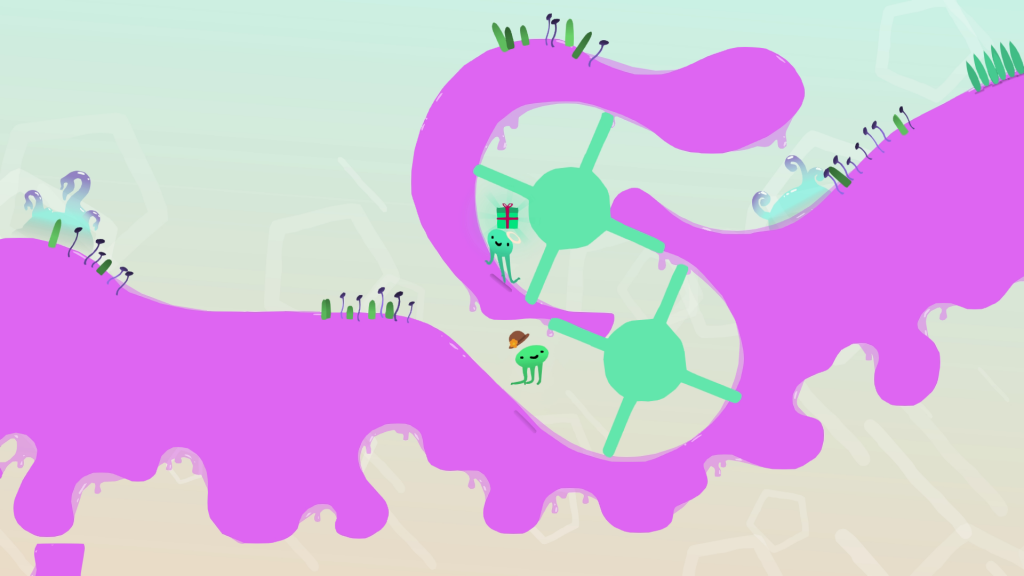 Muddledash is cute and charming, but it’s also a racing platformer that understands how to make it fun and fair for everyone rather than a show of personal skill. It’s a nice game to play with friends or family and because everyone often bursts out laughing! The content lacks a bit of variety to stand long sessions of play, but at its current price we will not hold it against the game. Lastly, let’s not forget the killer feature, choosing which hat your alien jellyfish-thing will wear!