The saga continues in this final installment. Immediately starting right after the events of Banner Saga 2, you take control of two different caravans on two different missions, but working together nonetheless. Rook (or Alette if she survived back in Banner Saga 1) and his caravan successfully arrived at Arberrang and managed to get inside the walls, but their concerns do not end. Despite the Darkness quickly approaching Arberrang, not only do you have to worry about Dredge or those warped by the Darkness, but those who are being harbored inside the walls who look towards violence. The other caravan is headed by Iver who is making sure Juno and Eyvind travels to their destination safely and due to the events of Banner Saga 2, also picked up The Ravens. They’re out to find out what caused the Darkness and the Serpent to exist and to bring it down to save the world, and the only way to do it is to travel through the Darkness themselves.

Will Juno and Eyvind be able to take care of the Darkness before it destroys the rest of the world? Can Rook/Alette keep Arberrang together long enough? 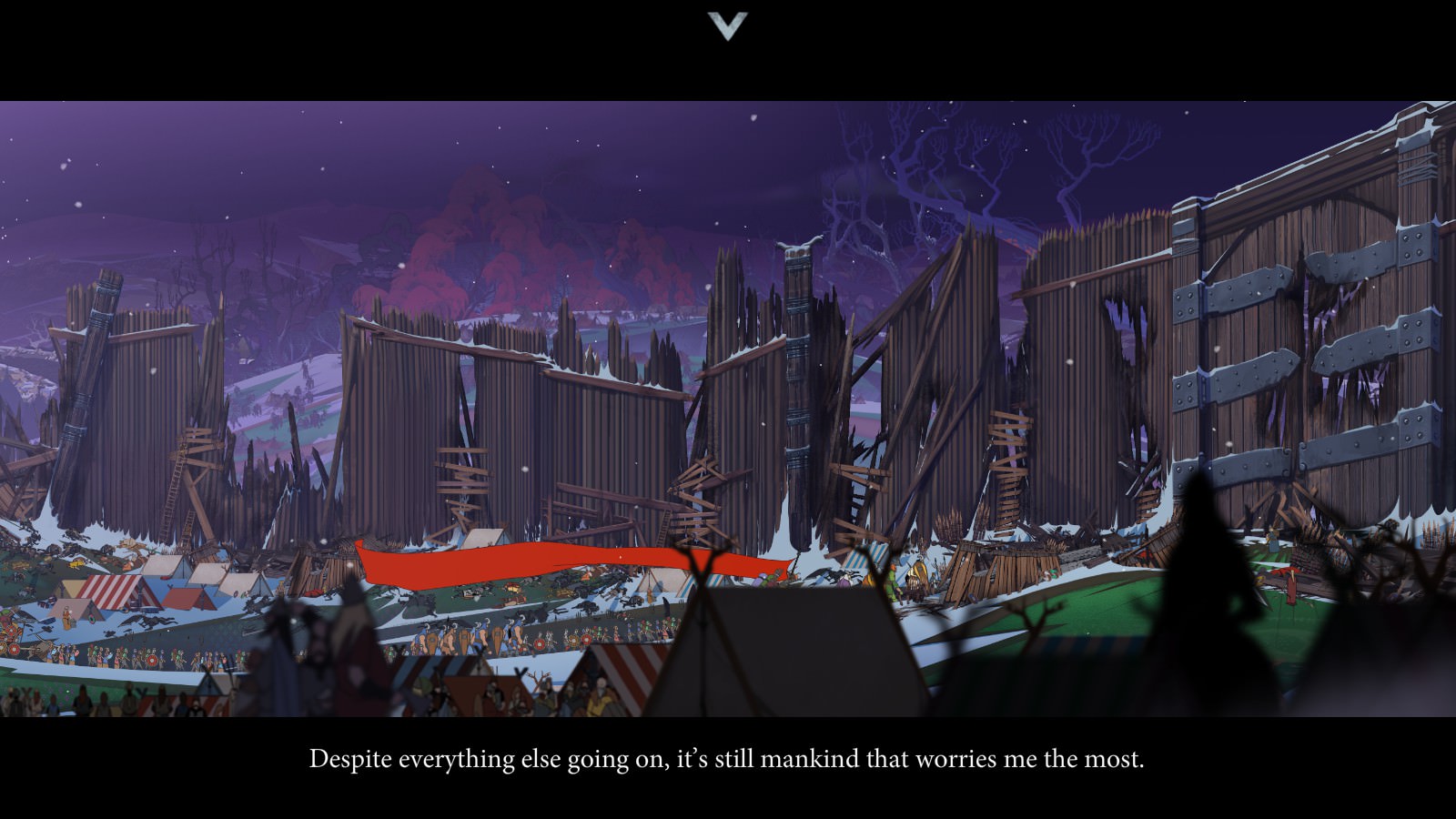 I don’t want to spoil anything, especially since many others have been waiting to see the end, but rest assured that Banner Saga 3 ends amazingly and answers most (if not all) questions that were posed since the beginning as well as ties off loose ends (like the long awaited effect of picking up the Dredge baby back in the first game). However, I do have two small problems. The beginning is a little weird considering we leave Rook/Alette when they find out everyone in Tolir was slaughtered with the only evidence of who did it being leftover hoof prints. When we start up here, it’s not brought up or dealt with till later in the first chapter. It makes it first seem like it was forgotten and it just made me think “what about the Horseborn and the conflict we were teased at the end of Banner Saga 2?” when I first started playing. My other problem is that the characters at the end didn’t mention a certain…something that you can let happen and it’s a little weird that they didn’t. 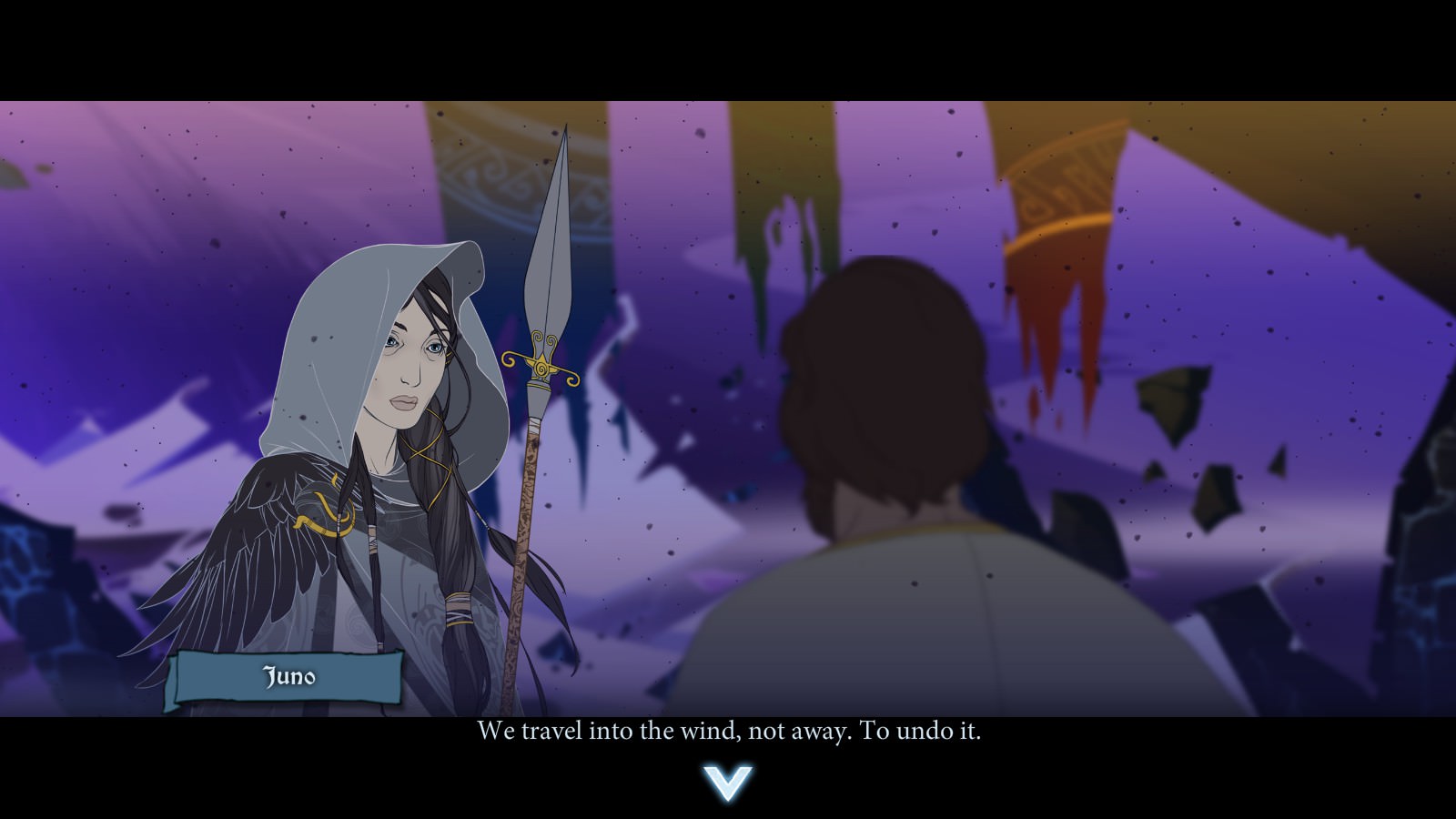 Of course, it can’t be Banner Saga without the management. Each day passing means another day’s worth of supplies being used. With Arberrang being the end all, resources are at an all time low, forcing you to be careful during battles so you don’t have to rest to heal injuries. This is another story for Iver’s group, but I’m not intent on spoiling it. All I’ll say is that I really loved what they did with the day counter as I constantly glanced up at it, worried to no end. 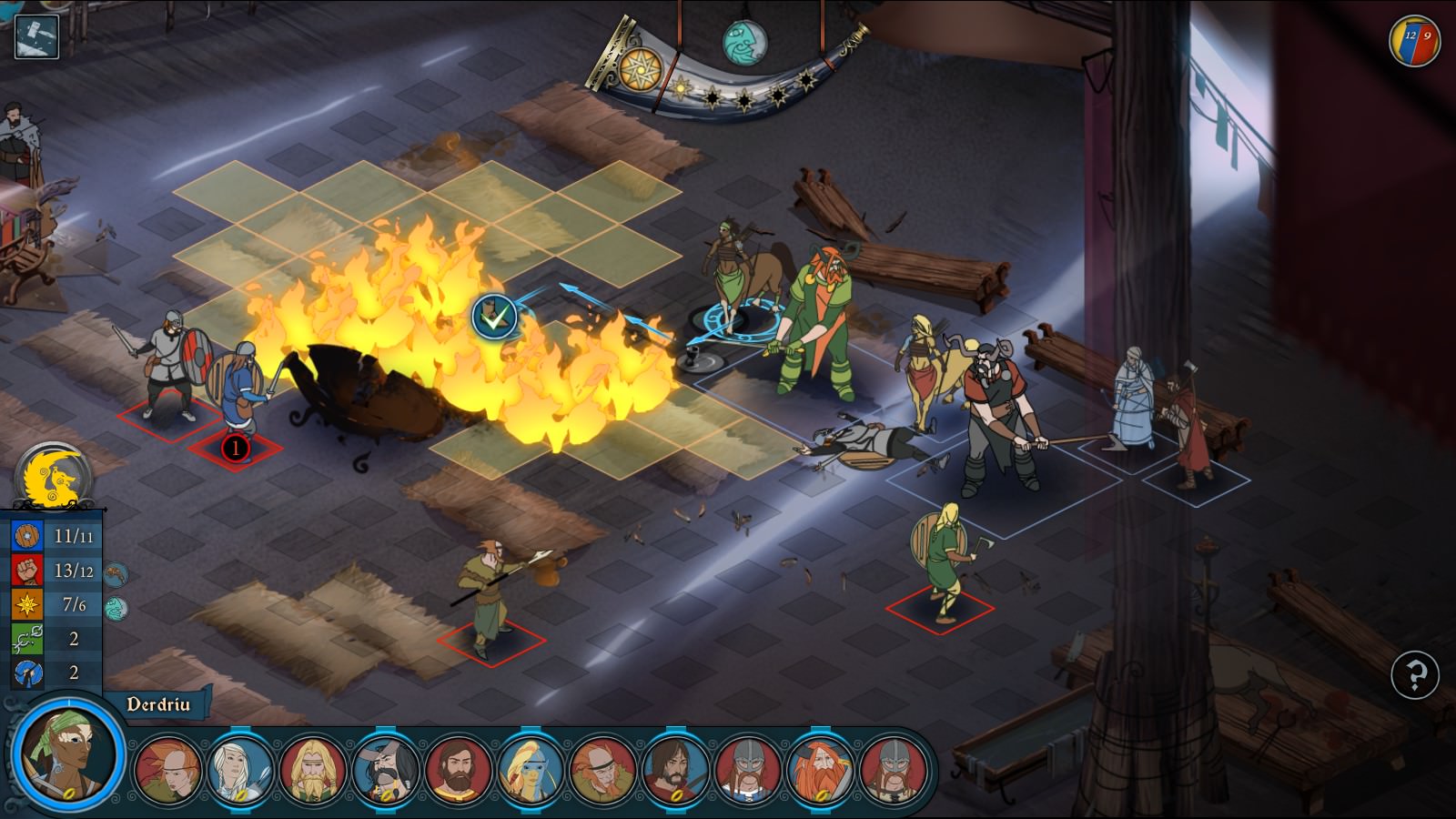 While a lot has stayed the same in Banner Saga’s turn-based battles, the additions they added to it made them even more brutal. As usual, before every battle you get to choose which heroes you want to fight and their turn order. What you may notice is that there is a new addition: you can now preview heroes’ stats and not only in this game, but it has been rolled over to Banner Saga 1 and 2 as well. Once decided, you can then see the battlefield and place your heroes anywhere on the deployment zone before the battle starts. You then have to work with determining when you need to damage their Armor so you can hit them harder later on or damage their Strength to lower the amount of damage they can do and bring them closer to death. Additionally, if you should use Willpower to move further, put more power behind your attacks, or to use an ability while also keeping an eye on your own. Maiming, or bringing an enemy’s Strength to 1 so they can only do Armor damage, will also help you out here. 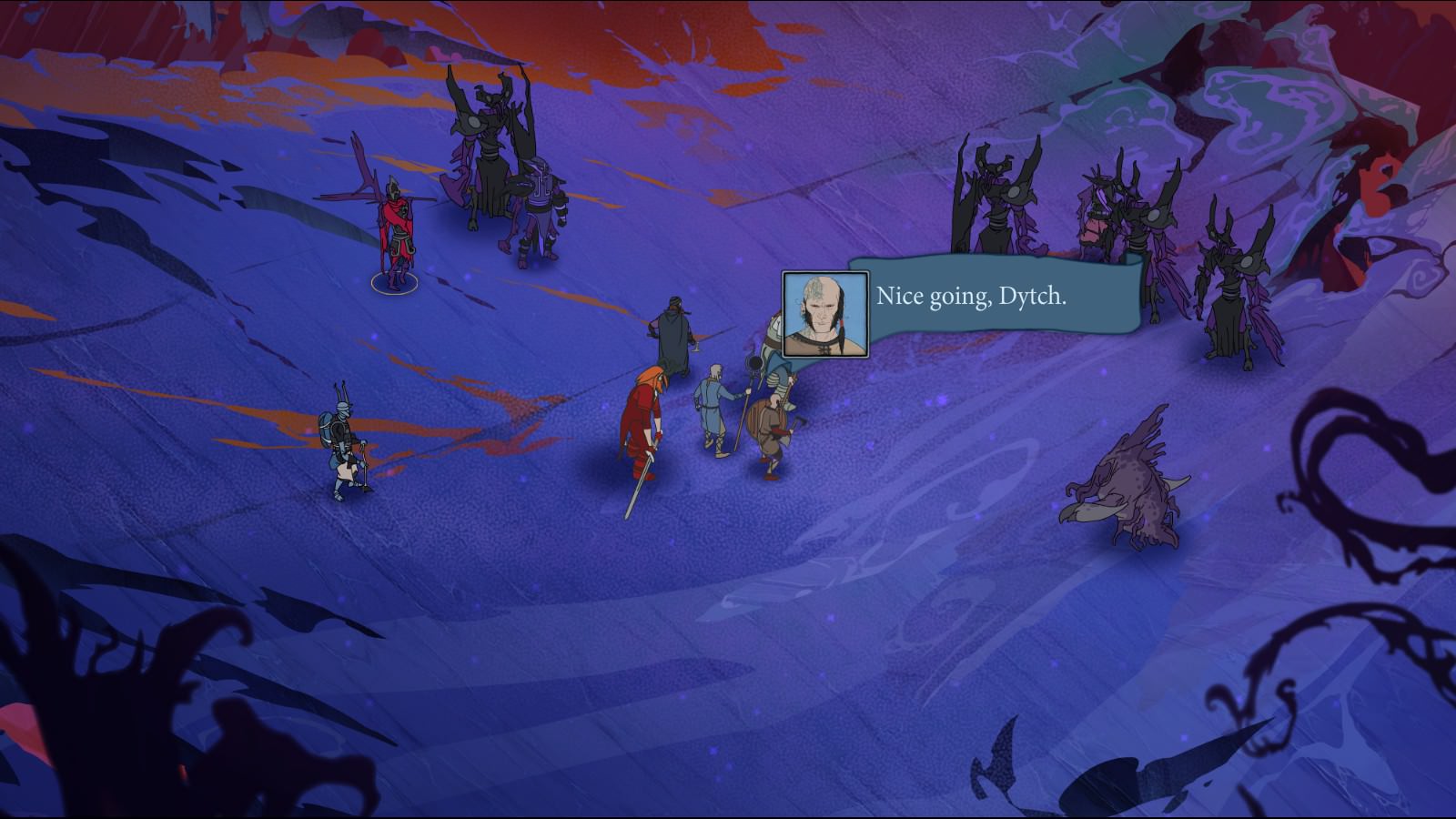 This installment introduces a new enemy, the Warped. Remember the Warped enemies you encountered in Banner Saga 2 with Bolverk? Thought it was just going to show up only once? Well, think again! The Warped are those who have been, well, warped by the Darkness and due to this, can be any race and class (Dredge, archers, bears, you name it) that didn’t make it to Arberrang. The new Warped enemies not only have the same movesets, but most will also trade in Willpower to negate some damage so they can survive just a bit longer. When they die, though, they leave behind ashes that will suck out Willpower from your heroes’ when they step on it or restore Willpower (one time use thankfully) if a Warped steps on it. It might not seem like that big of a deal, but you can easily be surrounded by the nasty ashes. 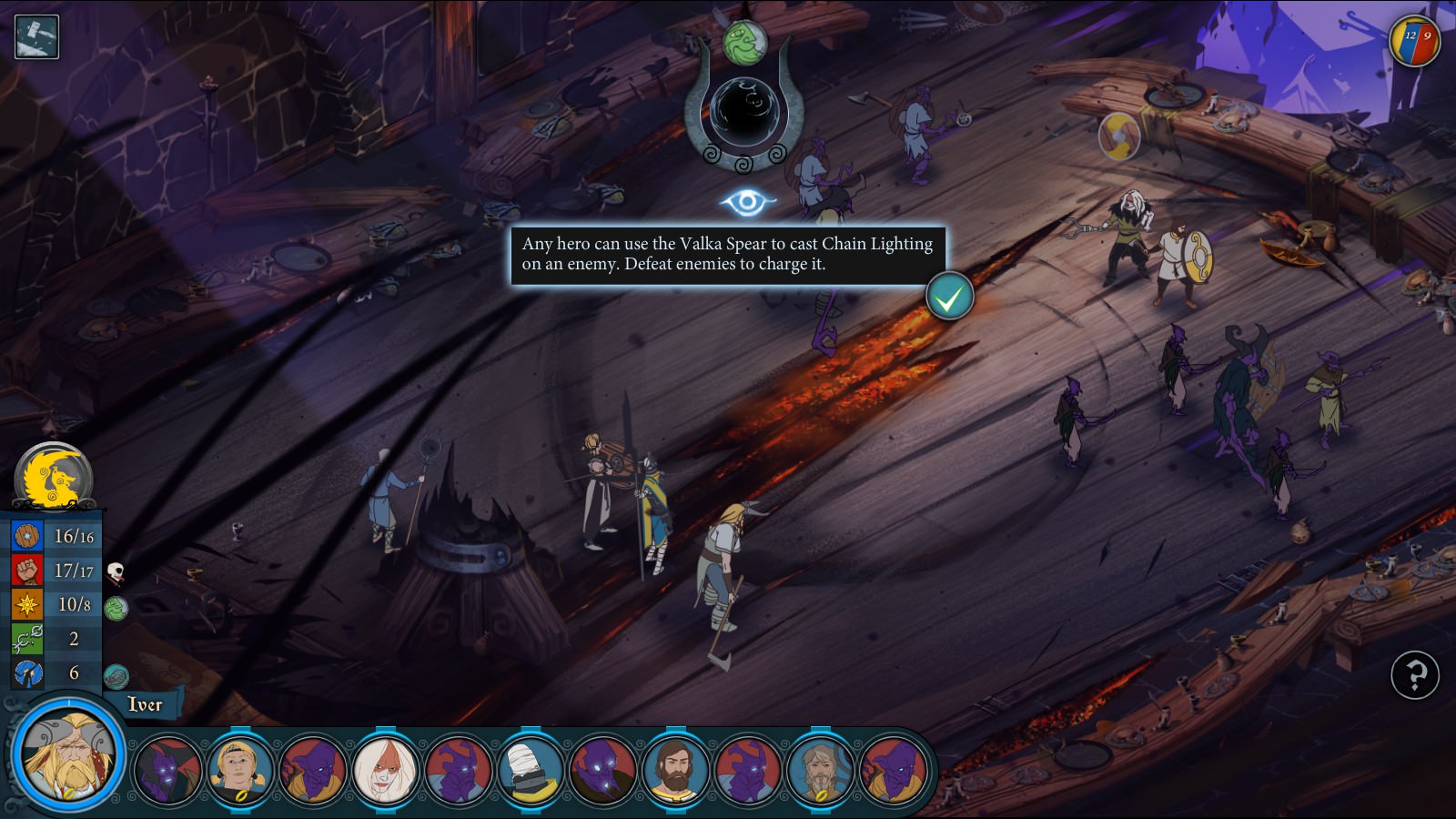 There are a few additions made that take place during battles. Fire has been added as a new hazard and when present, will spread if it can. It spreads slowly, but fast enough to quickly sneak up on you, and if anyone is caught in (or just walking through it) Strength damage is dealt. Where you would us the Horn, which restores Willpower, with Iver you use a Valka Spear to cast chain lightning, something which is powered with kills just like the Horn. You can now put Juno in battle and there are new heroes that can join your caravans. Lastly, if you’re fighting against the Warped, there will be another wave ready to butt in. At the end of the turn order, you will see a countdown that ticks down with each player turn. If you don’t kill every enemy when it reaches 0, that wave will enter the battlefield. However, if you do defeat all the enemies, you will be given the option to flee or fight to gain a powerful enemy, along with the ability to switch out heroes before the wave arrives. 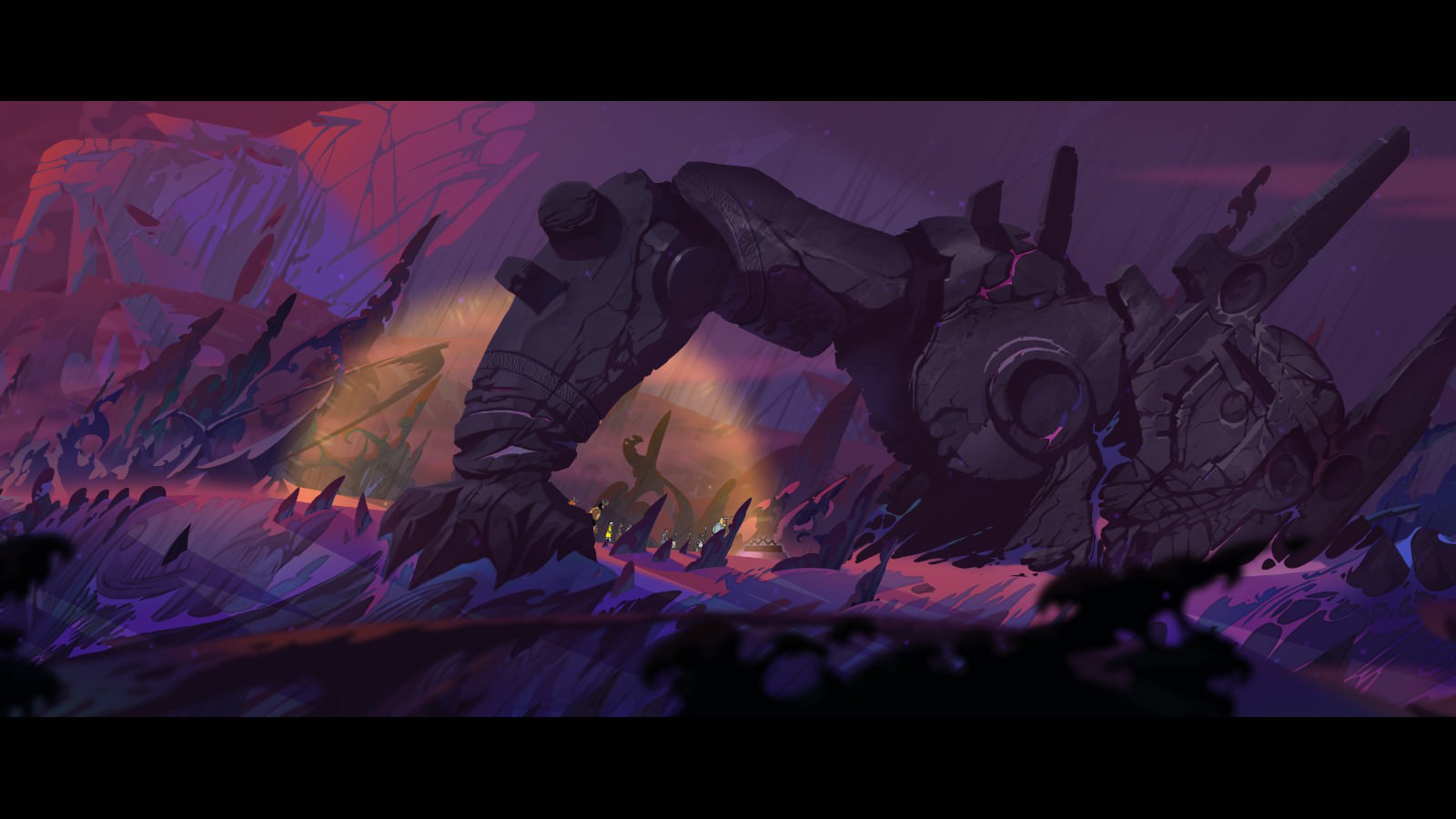 With the heroes, the rank limit has been risen from rank 10 to rank 15. Weirdly enough though, each promotion between rank 10 and 15 costs 10 renown each and I have no idea if this was intentional or not when taking into account what they added. Where Banner Saga 2 brought us Talents that become available when a stat is maxed out and a second ability at rank 6, we get Heroic Titles here. When a hero reaches rank 11, you can bestow a Heroic Title to give them an advantage on the battlefield. It can be something like getting a boost around other heroes or even a boost to a particular stat. However, a Heroic Title is unique and once it’s given to a hero another one can’t have it as well. Giving a hero one is free, but upgrading it to it’s full potential isn’t.

The training tent that has been present in the previous installments of Banner Saga doesn’t make an appearance here, however it makes sense why. Story-wise neither groups have time to go train as the Darkness is literally knocking on the last city’s door. Despite part of me wishing it was in just to make some achievements easier to achieve, it would be weird if they had time to do anything but rest the little they can.

Withit being possible to not play Banner Saga 1-2 first, but not recommended, can new players just skip to Banner Saga 3? Absolutely not. Banner Saga 3 goes right in and doesn’t stop to give small recaps here and there apart from the recap video you can watch on the main menu. Along with this, there are a lot of choices that directly affect what happens here and it can certainly be confusing for new players if they just jump into the last game. 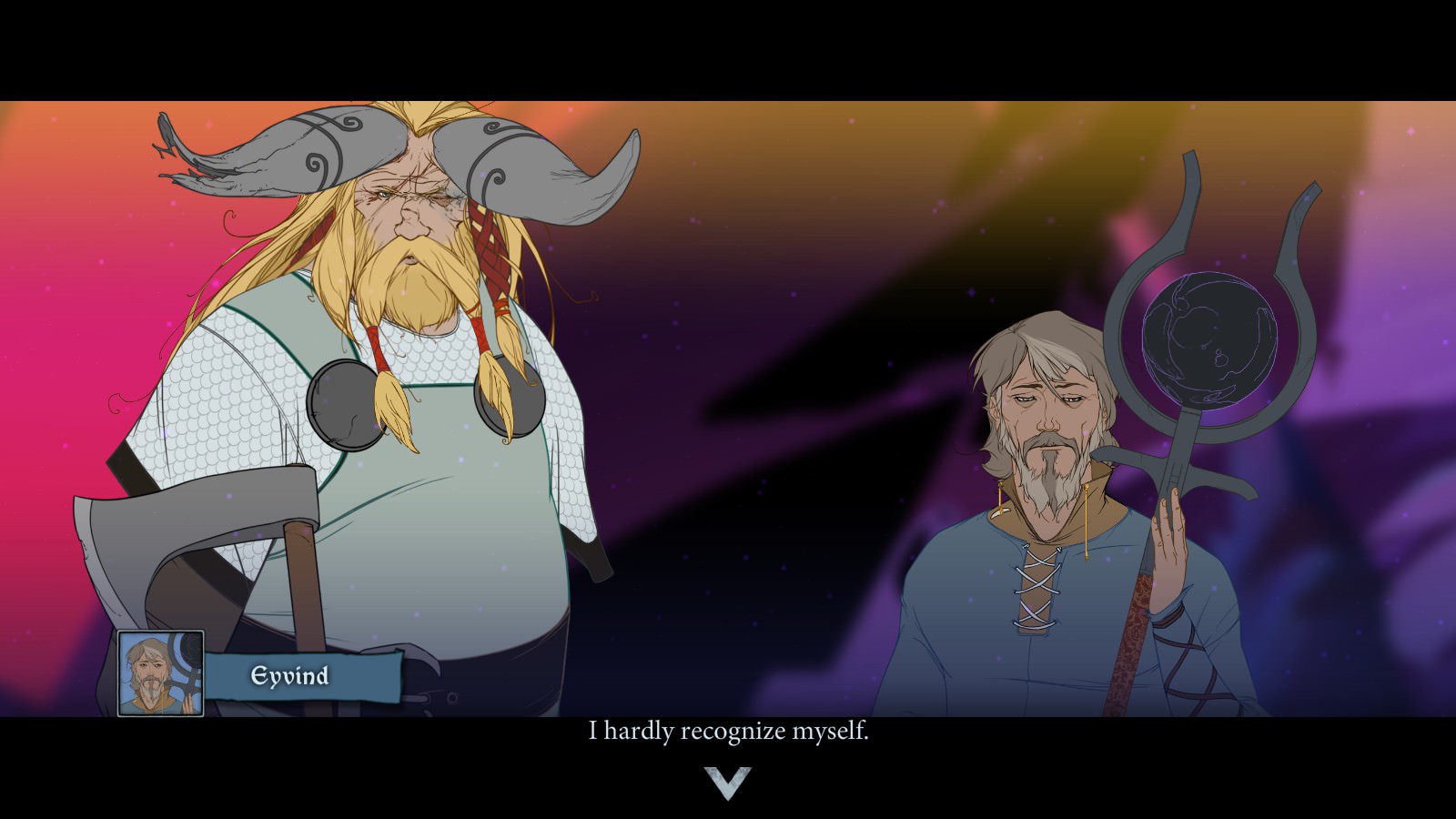 Banner Saga 3 is a brutal, but satisfying, end to the series that many, including myself, hold close to their heart. Despite a few problems I had with the story, I still love the full storyline and thoroughly enjoyed my time with it. It also goes without saying that the art was beautiful throughout, the soundtrack perfectly matches whatever scene it is, and despite it being bleak, it knows the right time to crack a joke to lighten the mood just a tad. There are many variations you can end up here, both with what decisions you make in this game and the previous two, that I will definitely go back and see. I highly recommend the whole Banner Saga series. Don’t hesitate to jump right into the world of Banner Saga. 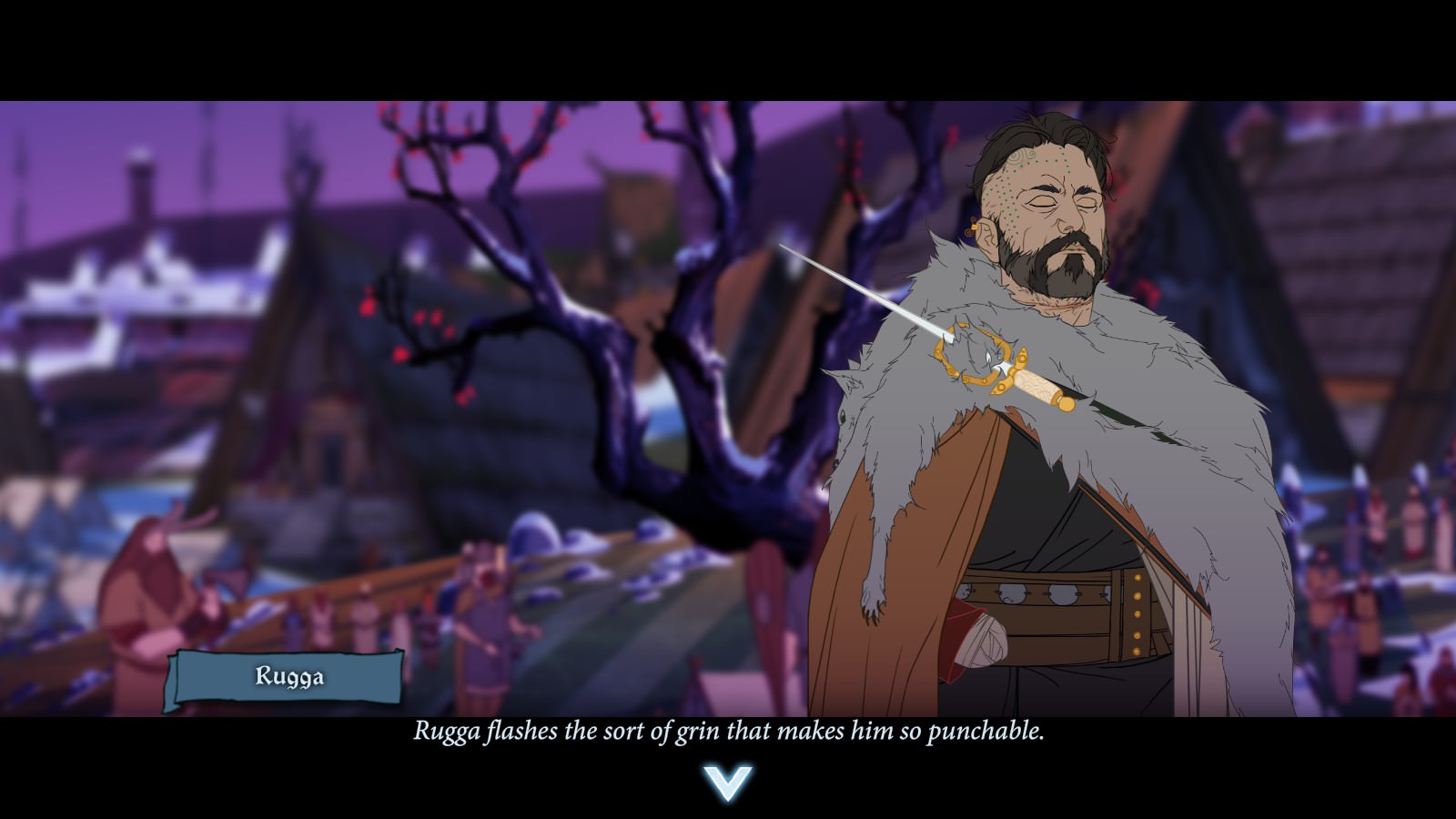 *You can let the Serpent eat part of the World, and when you see Rook’s/Alette’s caravan again, you can see the Serpent’s body in the distance but yet they don’t mention it.

Tagged asBanner Saga, brutal, Darkness knocking on your door, final, making sure there are people to save, no shame in fleeing, rpg, saga, saving the world, Serpent, story rich, strategy, the Darkness, the world is ending, turn-based combat, turn-based strategy, Warped
Share:TwitterFacebookRedditPinterestWhatsAppEmail